Introduced in 1990, the NSX (NA1) was Japan’s first mid-engined supercar that was fast enough to make a Ferrari look foolish. Developed with inputs from a certain legendary test driver, Ayrton Senna, it was a car for people who valued incredible engineering. Honda claims the inspiration for the greenhouse was taken from an F-16 fighter jet’s bubble for its 360-degree visibility.

In 2002 Honda introduced the facelifted version of the NSX (NA2), which was followed by the NSX-R, which is the model we have with us today.  Is the model diecast or composite?  AUTOart’s decision to switch from diecast to composite has been controversial. Despite having received a ton of criticism from fans around the world, they have not reconsidered switching back. Instead, they have stuck to their guns and gone all-composite, for good. 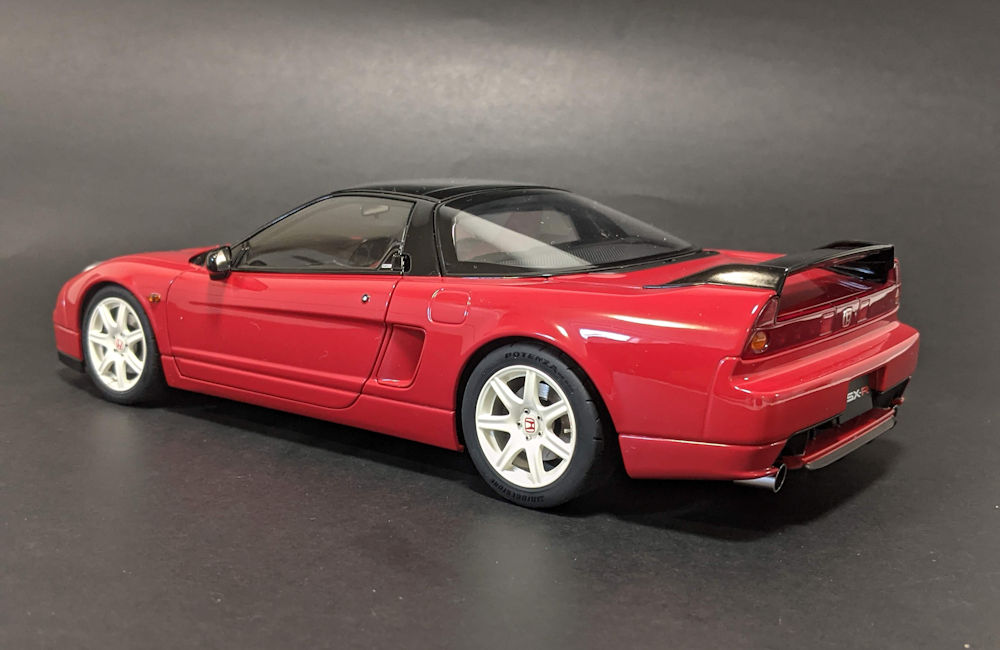 I wasn’t very pleased when I got my first composite model. Initial impressions were of it feeling very light and extremely delicate to handle. Over time, however, I’ve come to appreciate this change more and more. Why you may ask? In over ten years of collecting model cars, I have seen numerous models being plagued by paint rash issues and sympathized with fellow collectors complaining about models being devoured by zinc pest. When you have a large collection, it can get frustrating having to deal with it. It is also no fun when highly desirable models you own lose value for no fault of yours. 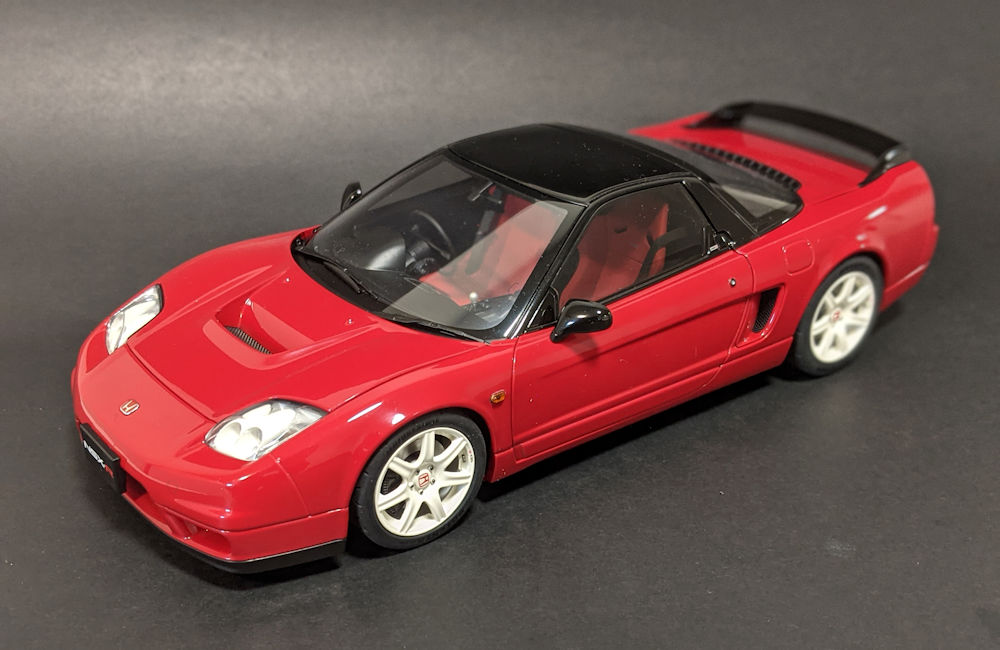 So is the model diecast or composite? Before one of you asks the question again for the millionth time (urgh!), the NSX-R (NA2), unlike the NA1, comes from AUTOart’s composite line, just like 99% of their models released since 2016. With that out of the way, we then have a perfect model to compare to AUTOart’s diecast NA1 replica of yesteryear.

What colours are available?  New Formula Red, Long Beach Blue Pearl, Championship White, Berlina Black,  and what I believe is the ugly Championship White/Black Carbon (if you like it, no offence).  Following the release of the first batch, AUTOart announced the model will also be available in Indy Yellow Pearl sometime in the future. Should be interesting! 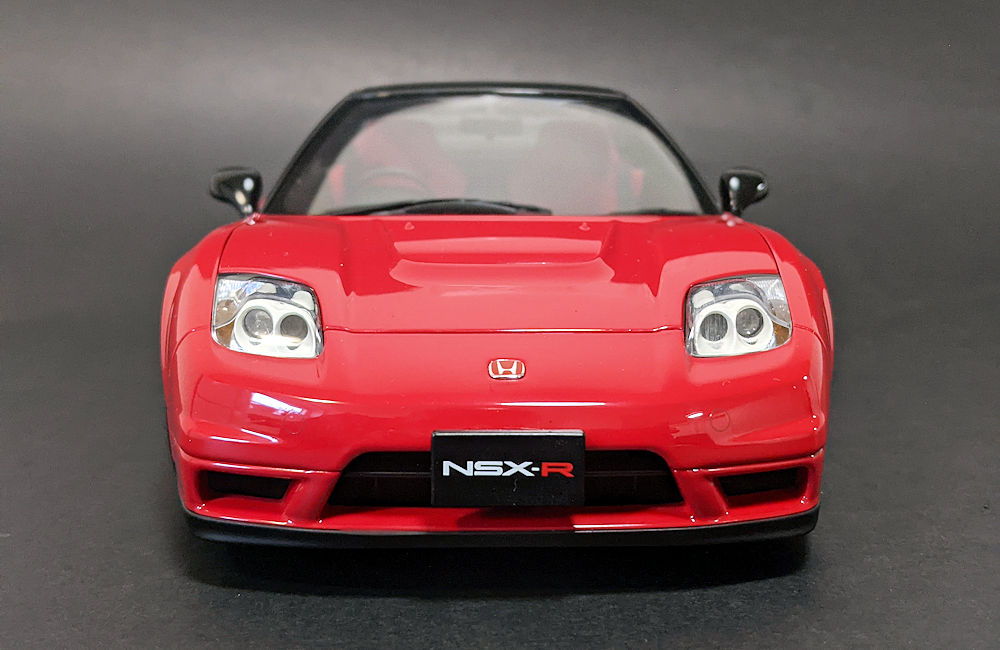 Which colour did I pick?  Since I already have a white NSX-R (NA1), I chose to have more variety in my collection and decided to go with red and blue.  Enough said, now let’s jump right into the review.

The box is the standard blue AUTOart box which we all have become familiar with by now. Inside is a white styrofoam shell encasing the model. Gone is the fancy signature packaging, so don’t waste your time looking! The certificate and booklet that came in the box with the NA1 are no longer provided with the model. 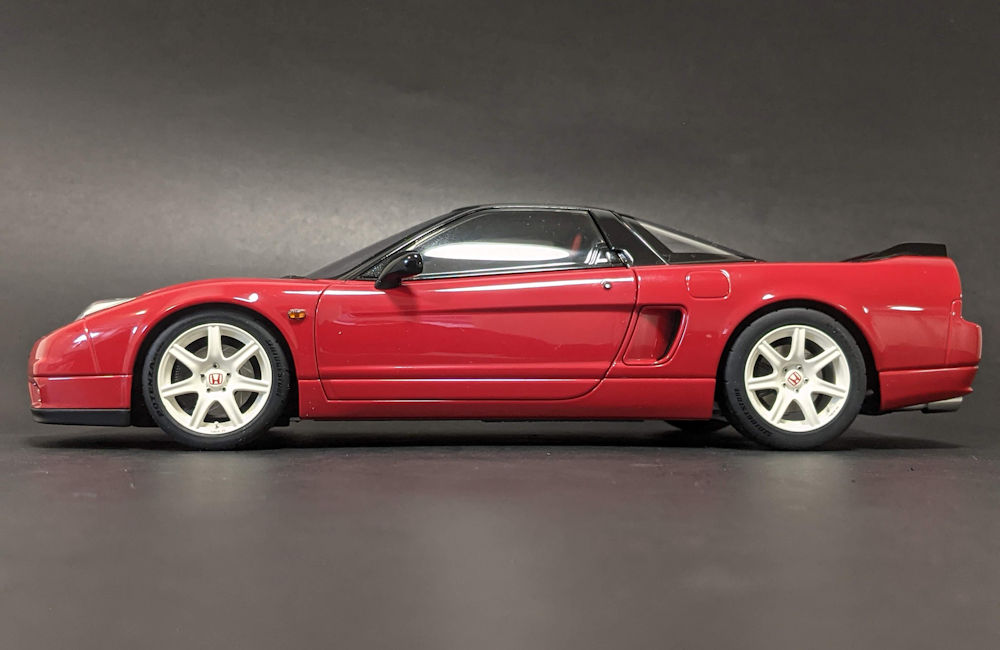 Out of the box, the model looks very impressive. The overall stance looks great, the smooth and flawless application of paint and fine shut-lines make the exterior look as sharp as a heron’s beak. The red is a nice dark shade, which in my opinion, looks much better in person than in pictures. The blue, however, looks stunning in pictures, but in person may come across as flashy to some. The model doesn’t feel as light as a feather in hand and has some weight to it – enough to stop the critics from grumbling. 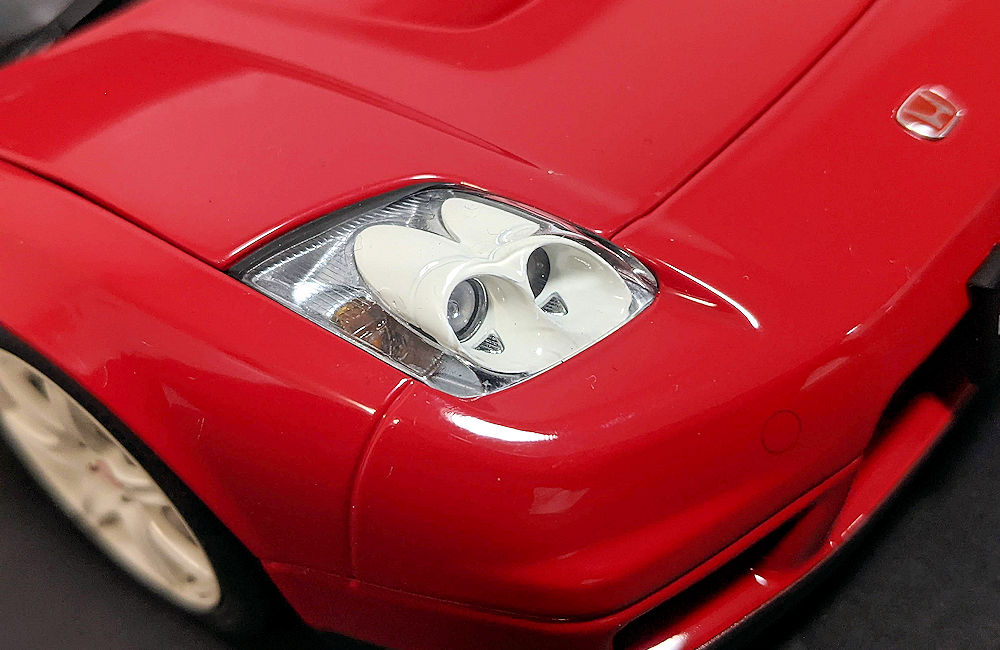 The notable differences from the NA1 you will notice right away are the headlights and the air duct in the hood to provide an extraction route for the front radiator. Honda committed one of the greatest atrocities of all time by killing off the pop-up headlights and replacing them with four frog eyes. I was never a fan of the redesigned headlights, but they have slowly started to grow on me. As for the details, AUTart has managed to replicate them rather well. The quality of the clear plastic used is also good.

The Honda badges, both front, and back are reproduced well. The air duct in the hood and side vents are all completed with perforated grilles. AUTOart deserves to be applauded for consistently using actual mesh throughout their models. 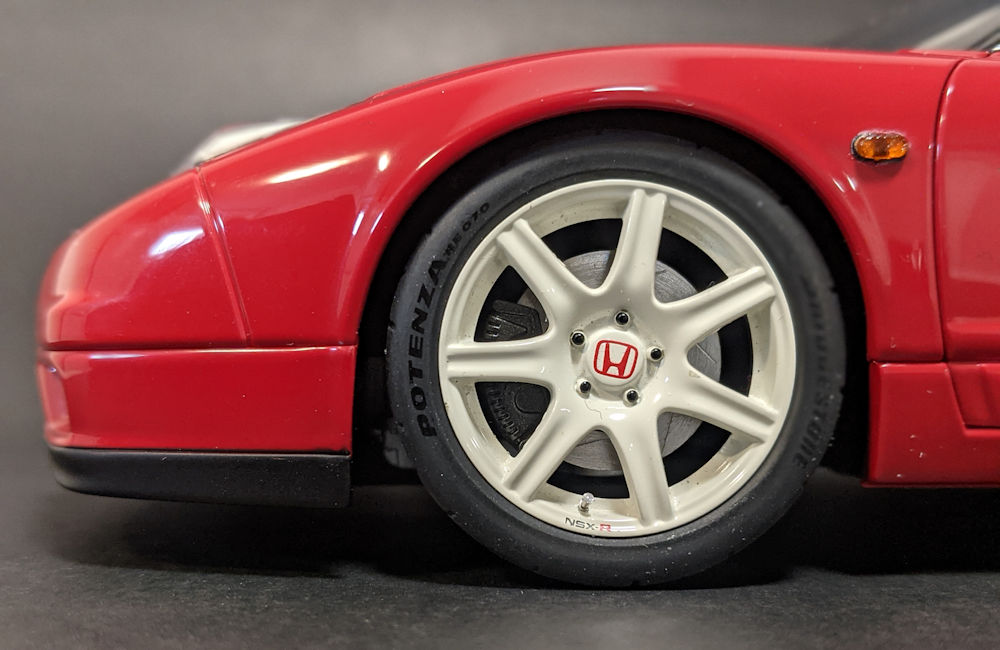 Where the model really outshines the NA1 are the wheels. Details like the tire wall branding and valve stems lend it a very true-to-life appearance. The look and finish of the rotors are quite nice as well. 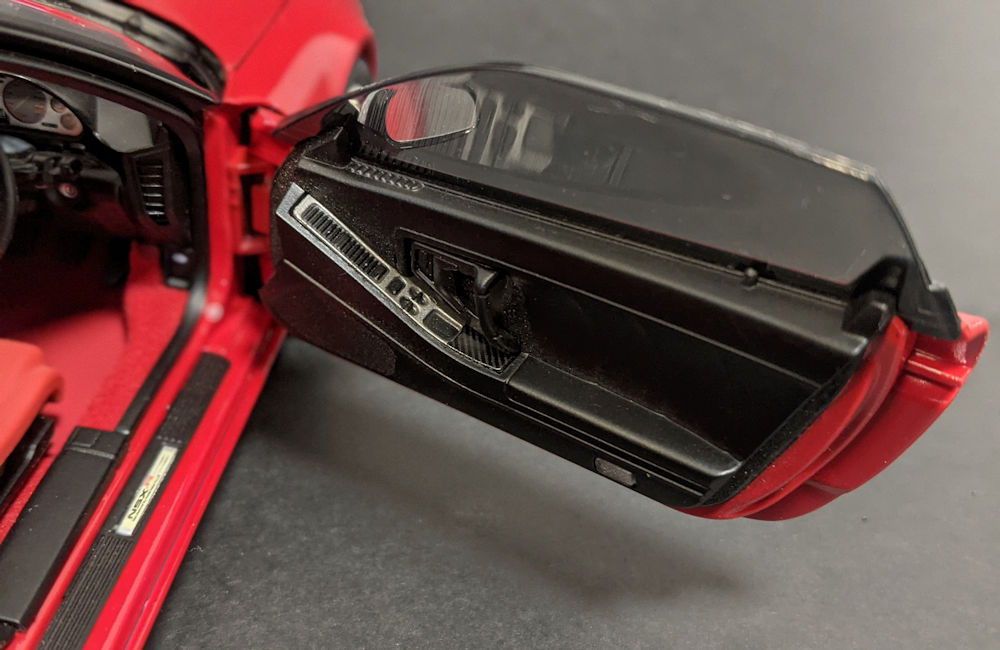 The opening features remain the same as before, minus the popup headlamps of course. Thanks to tightening some screws (maybe?), the trunk doesn’t feel as flimsy as some of the older composites. The doors however do feel light and fragile when opened. Inside you are greeted by a black dash, red carbon-kevlar Recaro seats, and a carpeted floor. There is a good use of colours and textures, and the details are above average for a model at this price point. It is, however, disappointing to see the fabric seatbelts being replaced by plastic ones. Oh, AUTOart, how many cents could you have possibly saved doing this? 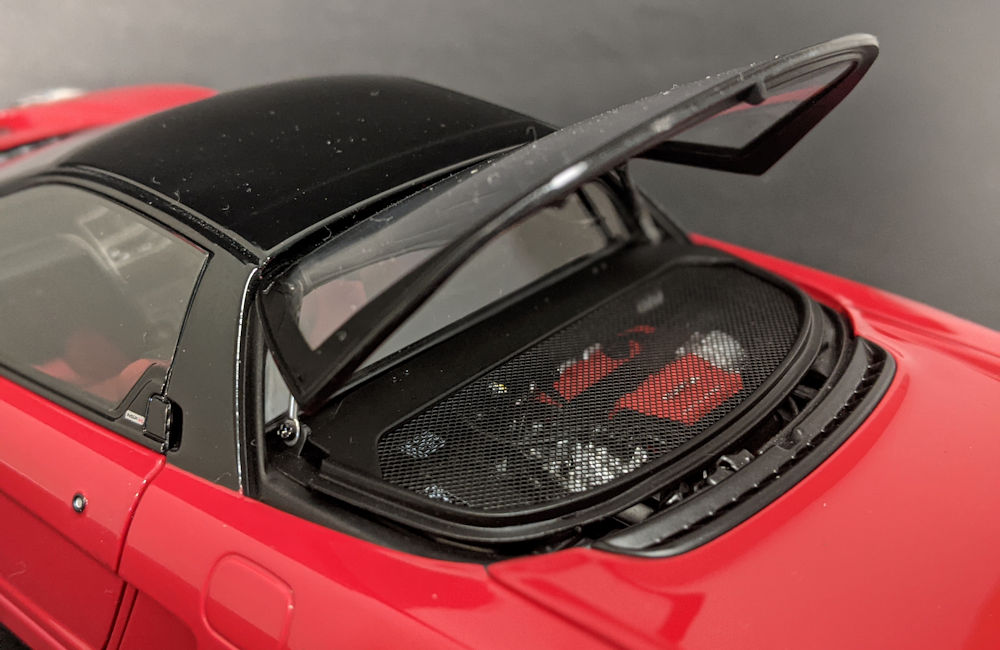 The most impressive feature of the model has got to be the rear access to the engine compartment. It is beautifully replicated! There are multiple opening bits here that you need to lift to get to the motor – a  glass window and a mesh protective screen mounted on realistic-looking hinges if you’re wondering. Unlike the NA1, the NA2 doesn’t come with a defogger template printed on the rear window, which is true to the real car. 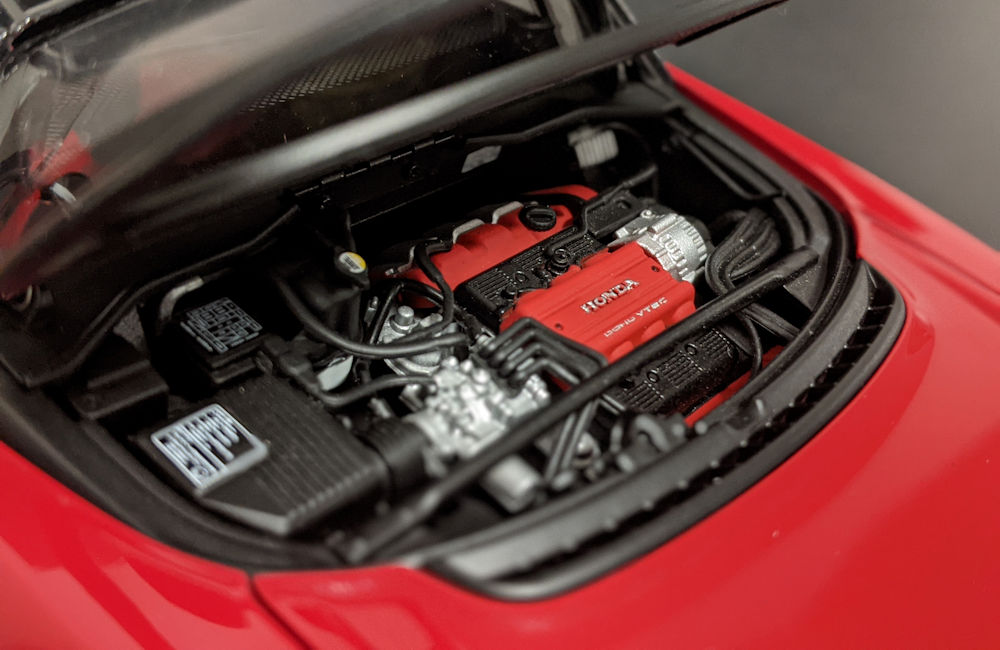 I discovered that the engine bay, to my surprise, isn’t lifted off of a cheap twenty-dollar Motormax. It is not a block of plastic, as seen in many recent releases from AUTOart. There’s enough detail to please most aficionados of this hobby.  The use of multiple layers, different colours and textures, and OEM labels give it a sense of realism and mimic the actual car very well. It is, in comparison, on the same level as the NA1.

As for the opening parts, there’s more! Unlike most mid-engined supercars, the NSX comes with a storage hatch in the back, just behind the engine. And, the trunk is not actually a trunk. Instead, you’ll find it houses different fluids and suspension components. The details here to are fairly impressive. 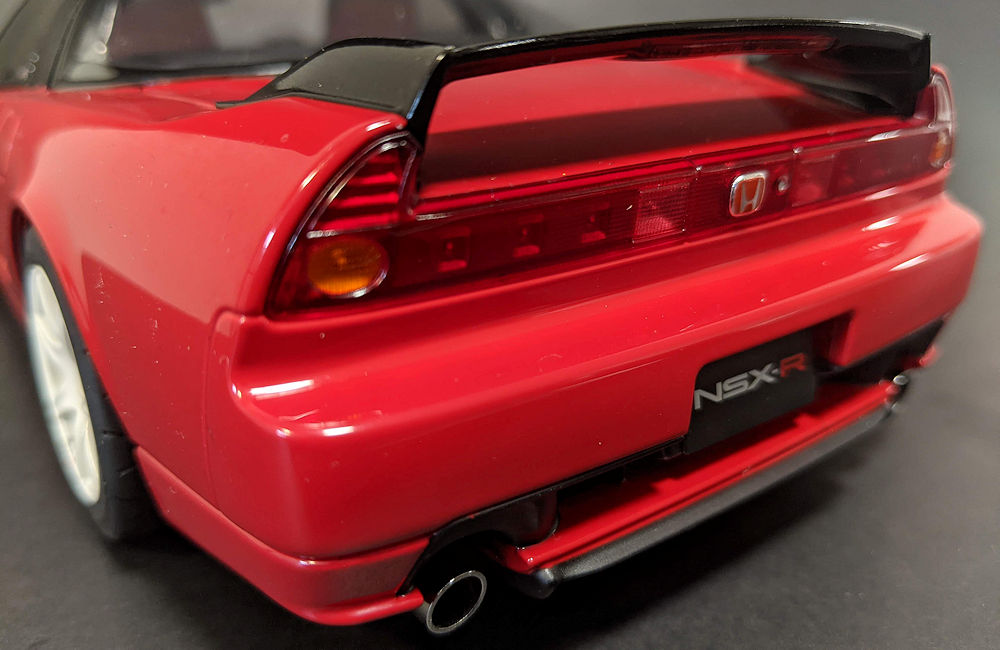 Moving to the rear, the main differences compared to the diecast NA1 are the revised bumper design and tail light graphics. There is also a bigger rear spoiler and larger exhaust tips, all of which are replicated well. I would have preferred the tail lights to be a bit more refined, however, as you can see the fake plastic bulbs through them glaring at you. The undercarriage is a work of art too, with plenty of details for you to drool over!

My final thoughts on the model?  As the model won’t been released in North America due to licensing issues (this has been confirmed by AUTOart Canada) finding one for a reasonable price proved to be quite a challenge. Expect to pay north of $400 CAD for one. 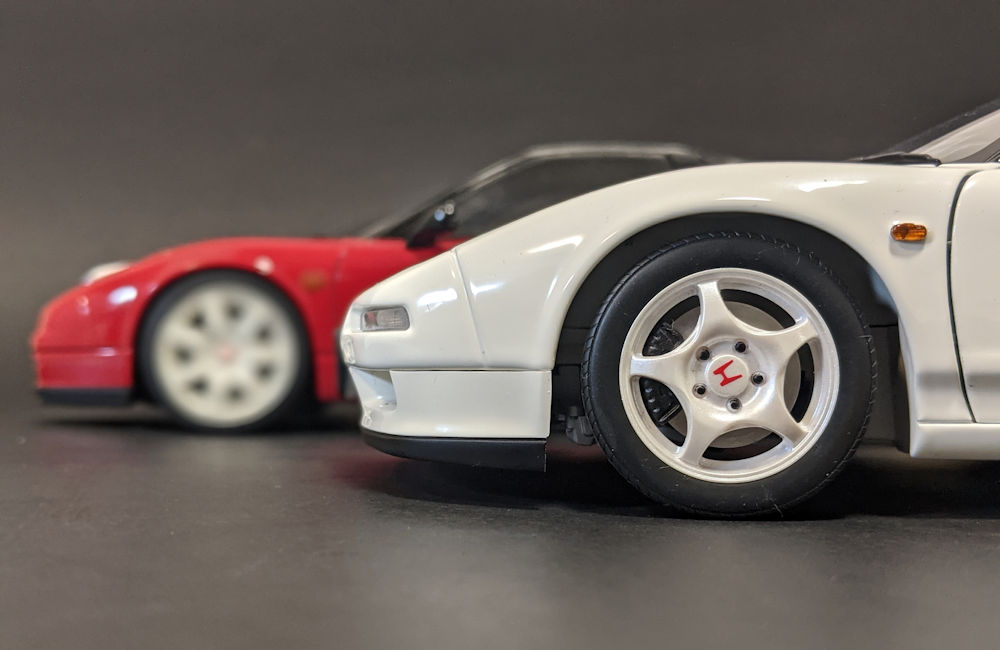 Apart from the plastic seatbelts and minor details, there isn’t much to complain about the model. I rate the model an 8 out of 10 and highly recommend it to all supercar and JDM collectors. I will go on to say that this is the best composite model produced by AUTOart to date. It is no surprise that the model seems to be very popular and is flying off the shelves quickly.  AUTOart deserves credit for their efforts, especially in the engine department, as this is one area where they have really struggled in recent times. I hope they are accepting of healthy criticism and continue to improve and give us models with better engine details on all future releases. Enjoy the pics!

View all posts by: Scenic's View