Since 1948 Ford has been producing the F-150 pickup truck, a popular versatile and usable automobile. For some, it is just an ordinary machine and for others an essential means to getting the job done. However, in 1999 the 2nd generation Ford F150 Lightning debuted with a 5.4 litre supercharged V8 under the hood and all the ground effects – definitely not an ordinary truck. Produced from 1999 until 2004 this truck was lightning fast reaching 0-60 mph in under 6 seconds – definitely impressive for the late 1990s and early 2000s. Until now, we had to live with an out-of-scale model by Bburago which just did not look right beside all the other 1:18 scale models. That said, thank you very much DNA for reproducing the original in the proper 1:18th scale. The example is crafted in resin with a closed body shell produced in three different colours: red, blue and black. Today I will review my personal favourite red model. 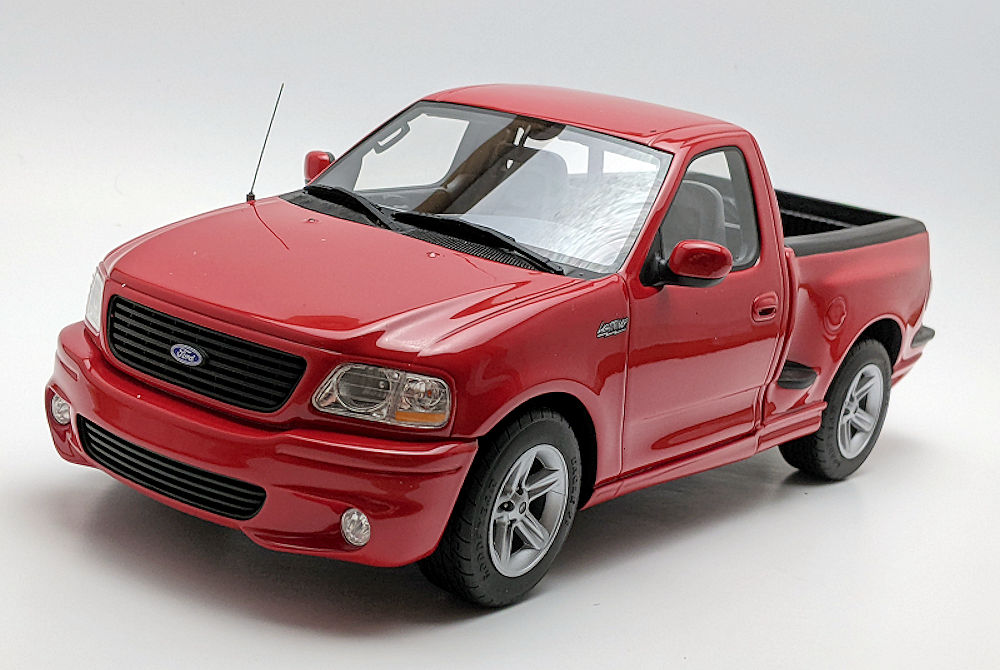 This DNA Collectibles offering comes packaged in the usual black box with see-through plastic in the front, top and both sides. This red Ford F-150 Lightning is screwed to a black base with Ford F-150 SVT Lightning scripted in white on the front side of the base. The truck itself fills up almost the entire box, and I am glad it does fit as I would be disappointed if it was shrunk to fit into the box. Phew! 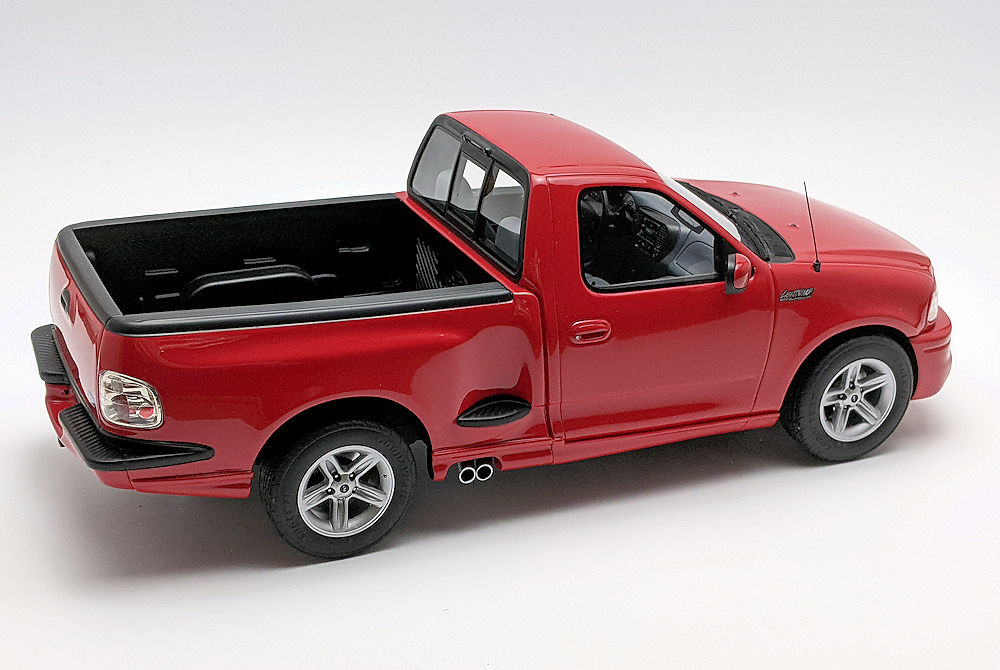 Let’s take this bad boy out of the box and take a closer look. I am happy to see that DNA Collectibles is consistent with great paint application and this one is no different. Paint is definitely applied with a touch of care – I do like the gloss and shine. I am happy they chose this red as it is my personal favourite and when I think of the F-150 Lightning, I think red. It seems as if every model DNA Collectibles announces will have at least one colour which is a must-have for me.

Shut lines have the usual decent depth to them. The black outlines around the windows are nice and tidy with the rear window being my favourite. Even though the middle portion does not open or slide, it looks as it very much would – quite impressive on a resin model. DNA could have just been put in a plain piece of plastic and painted on the black lines, but they didn’t. They went a step above to make it dimensional – definitely thumbs up! 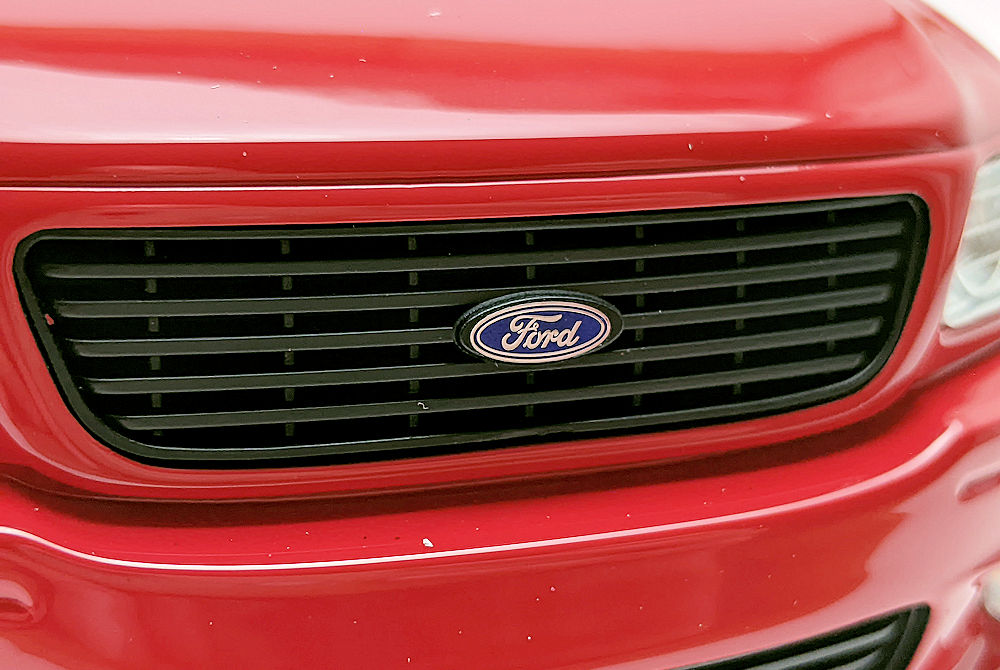 The real Ford F150 Lightning had a front bumper that was never flush and sat a little lower underneath the front grille and it looks like DNA did not miss that detail. The front bumper on the model does sit lower which is true to the original. Front lights and fog lights are very well done and replicate a garage stored, never driven original. Front grilles are perforated showing depth and the Ford logo looks great too! 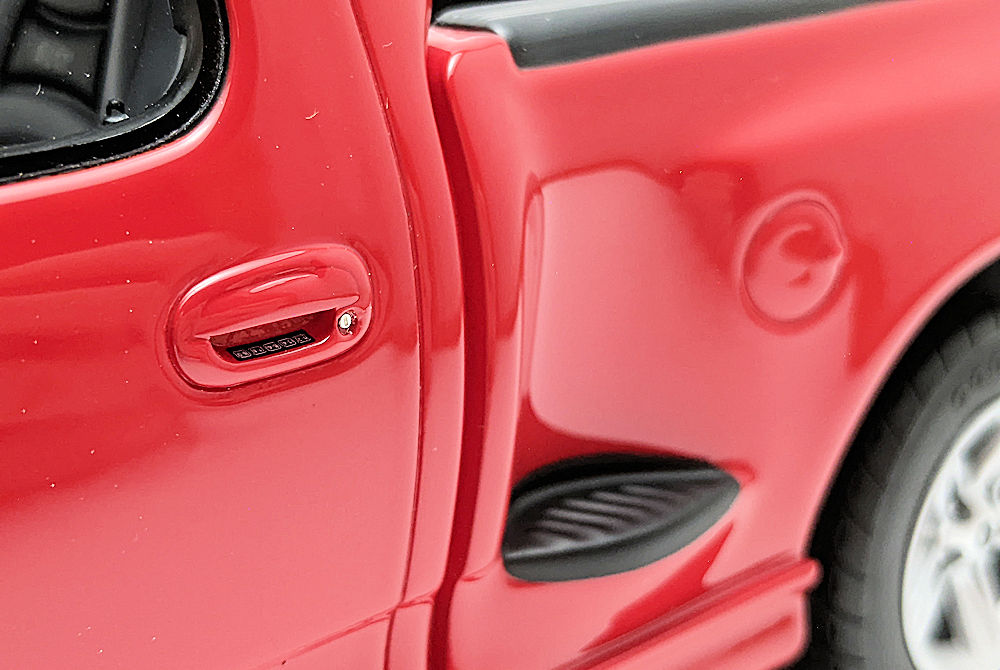 Moving to the sides, the door handles are painted to match the rest of the body. I would like to point out that under the driver’s side door handle DNA did not forget to add the numerical passcode buttons. This option was available as a passcode entry to the car without the need for a key (back then we did not have proximity fobs). It is a small detail but an important one as it shows a feature that was available during that time. Lightning badges are present on the front side fenders, and an antenna is present too. The side dual exhaust tips have nice depth with centers painted black. Moving on to the rims – valve stems are present as is the SVT logo in the center of each rim. The rims look good and Good Year Eagle tire branding is present. I would personally like to see the tire size scripted on the sidewall as well – I can’t think of any manufacturer doing that yet. Hey DNA, if you are reading this maybe you could be the trendsetter and start that trend (wink wink). 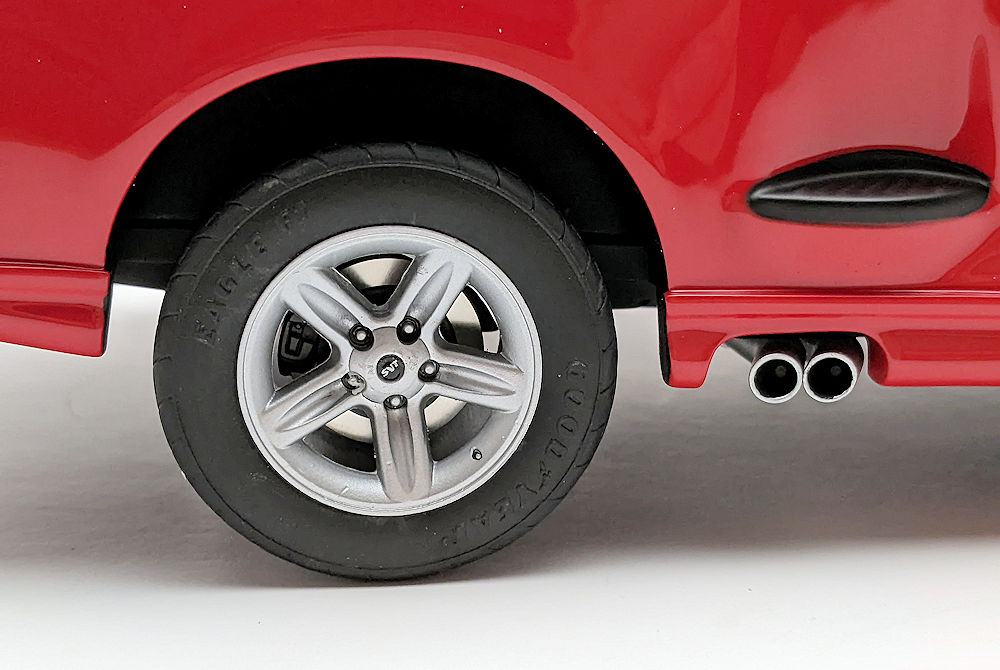 Moving to the rear, the usual bits are present. Nice detailing with applicable badging and the “Euro” taillights which came on the real car too. A tow hitch under the bumper is visible for those who want to tow their Jet Skis. The tailgate handle and upper portion of the rear bumper are detailed in black. The bed lining is all black with all the ridges, patterns and Ford Racing script present as well. 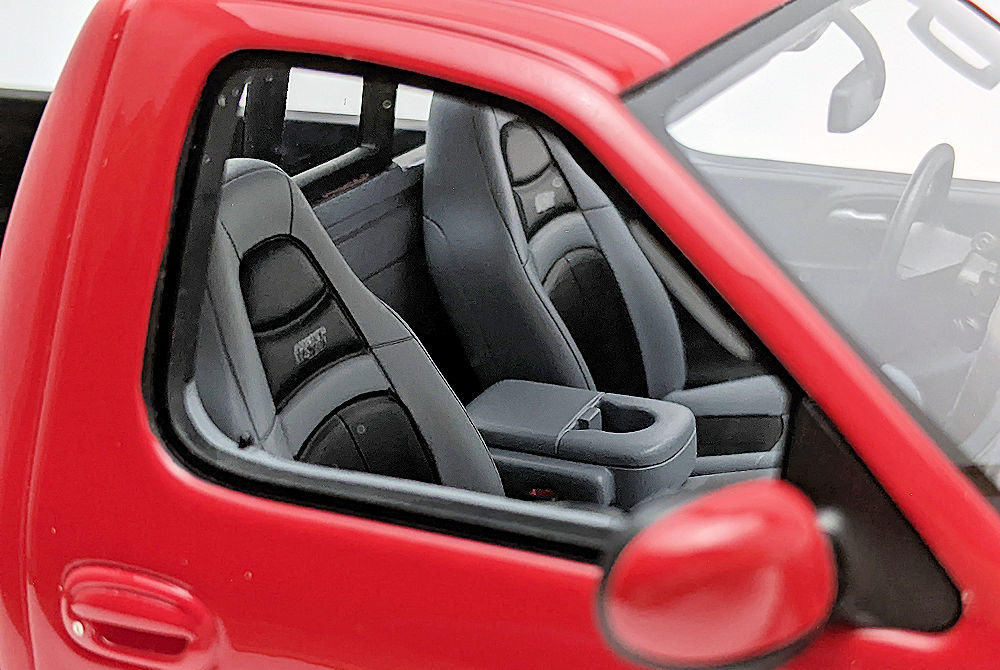 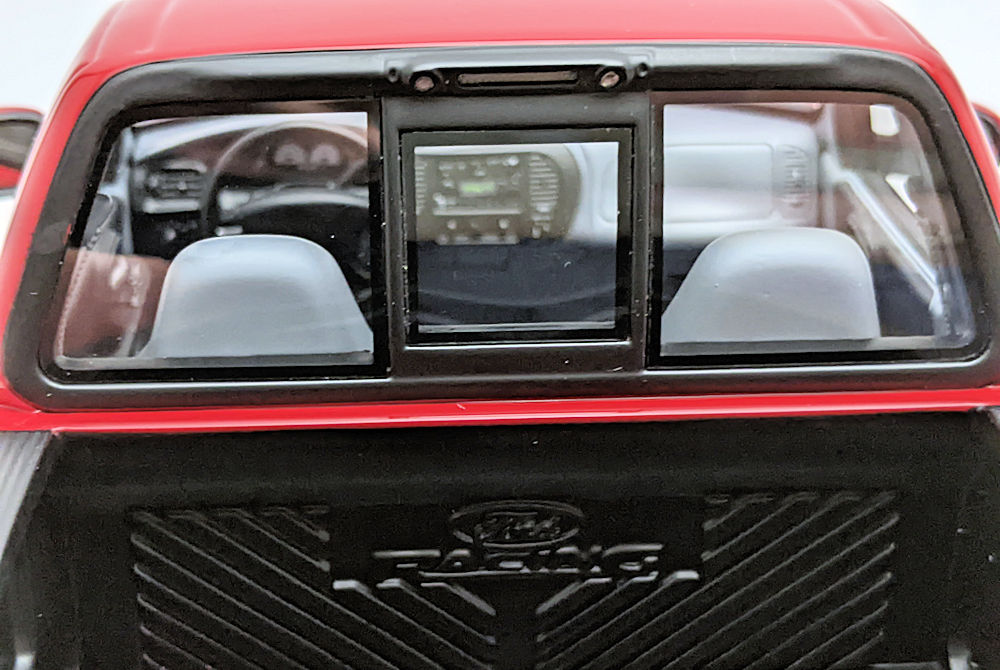 Now to the inside – two-tone grey and black seats, as well as the rest of the interior, are pretty much as exciting as early 2000s trunk interiors will get. As I have mentioned in other reviews, there were no big screens back then so there is not much colour to really replicate. I think DNA is on point here. Flipping the model upside down, everything is black with the exception of the muffler and pipes leading to the exhaust tips. Maybe adding a little bit of colour would brighten things up but I am not sure how many collectors find the bottom of the model important. 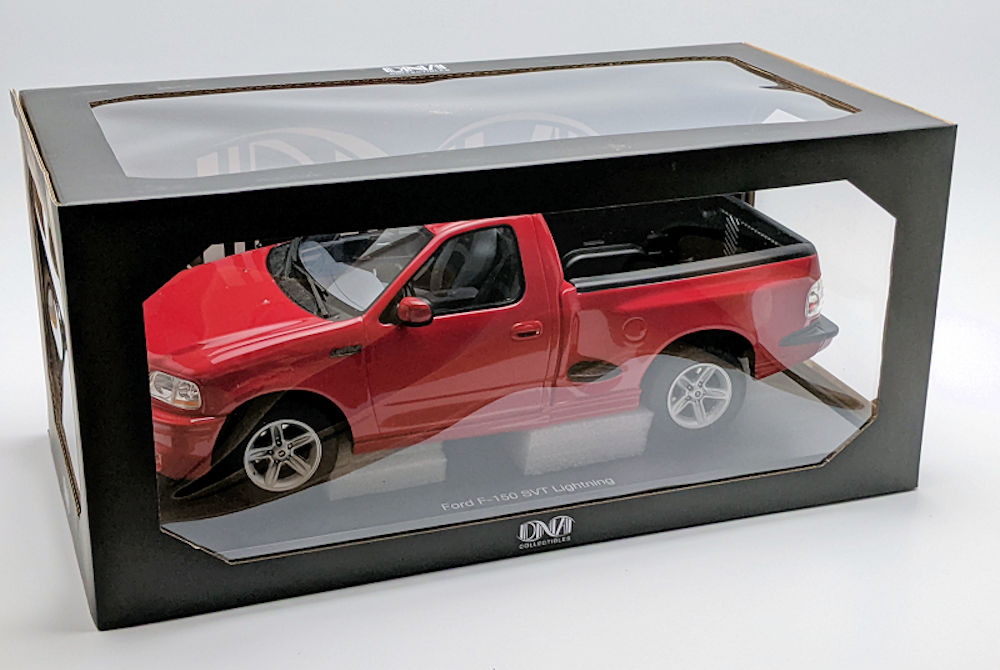 To sum everything up, I think it is another great model from DNA Collectibles that does not disappoint. DNA Collectibles’ history is short, but they have has provided us with a vast number of unique European models and now an American one too! It would be great if they could make another fast truck – how about a GMC Cyclone or Typhoon? What are your thoughts? Until then, keep up the usual quality and keep those DNA gems coming!