While I do know a lot about the cars of today, my knowledge of pre-WW2 classics is limited at best. This makes it perfectly fine for you to ask me a rather obvious question. How could I, a teenaged Porsche, Bentley, and classic car enthusiast, get his hands on one of the finest American luxury behemoths of the roaring ’20s? Well, sometimes you just see something and it calls your name and this was one of those times. I saw this at a hobby shop and couldn’t pass up the chance to get it. Granted, it’s used, however for $40 it’s 50% off, a steal!

As for the full-size car, it’s the Godfather of pop-up headlights, something we all love, and not to mention the looks. I’m an American but no expert on American cars and even I can see that this thing is a looker. The wide, detached front fenders are beyond stunning. But how does its 1:18 counterpart compare? Let’s find out. 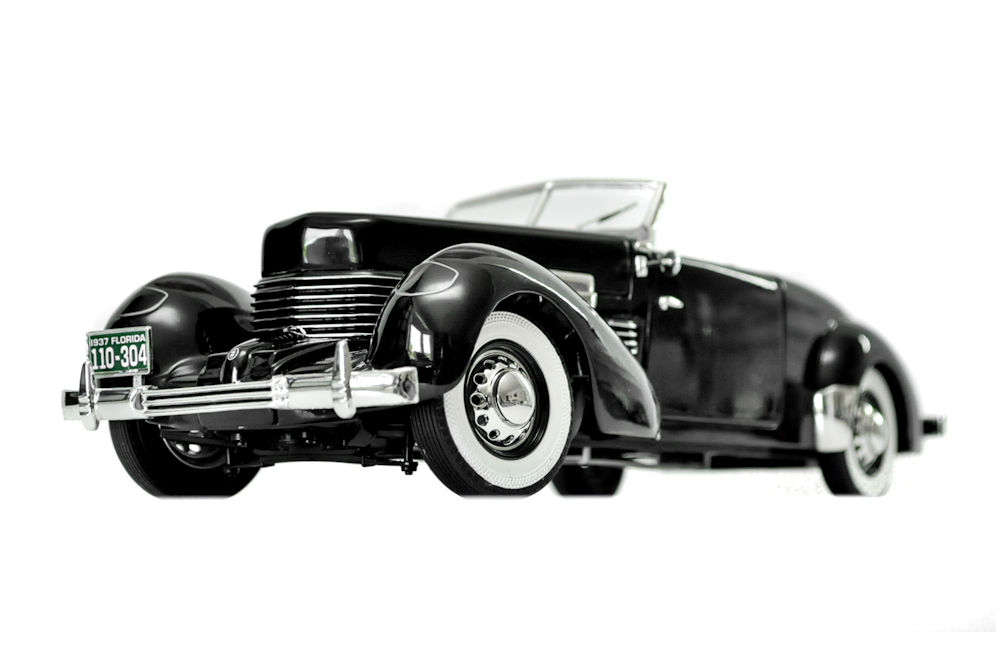 At this price, you can not love this car. Straight out of the box, I was very impressed. There is no unnecessary chrome, plastic, or anything else that I despise on the car itself. But the packaging is a bit on the cheap side with overgone logo graphics. As someone who prefers a more subtle packaging design, this disappoints me. 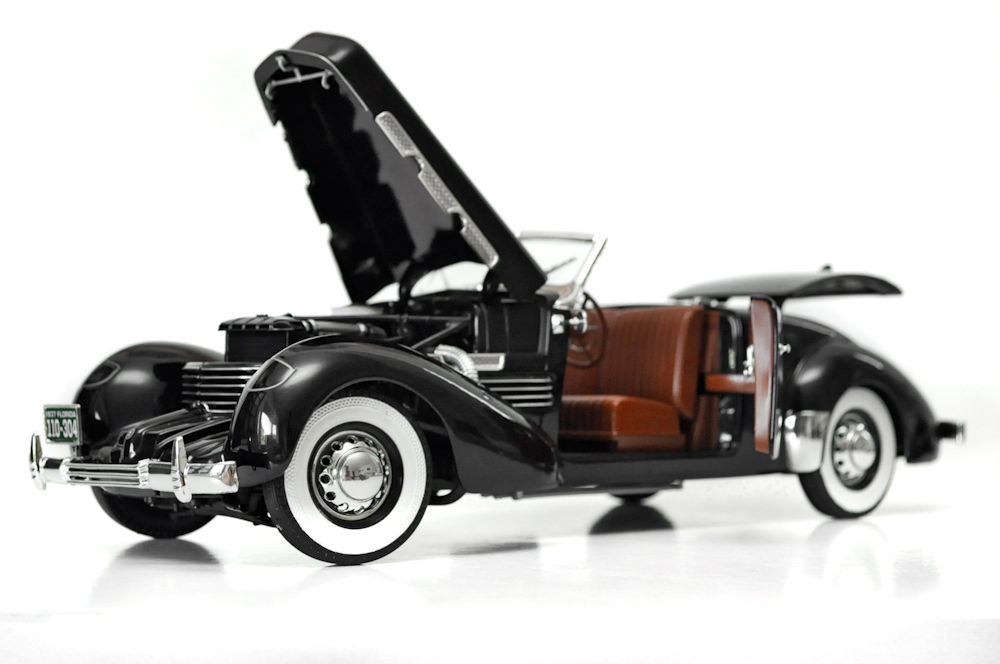 Regarding the model itself though, I love it. The paint is high quality, a bit too metallic for some, but overall very nice with very little orange peel. The white-wall tires are especially cool – they add some contrast to the black paint and tires, as well as continuing the “of its era” design theme. I also found an almost hidden feature while inspecting the model – adjustable seats. They can go forward or backward as you please, a distinct feature compared to my other 1:18s. Finally, I find it ironic that I mainly love this car because it started the pop-up headlight trend, but on my model, the headlights are fixed. An outline for them is included though. Off to a good start, Ertl. 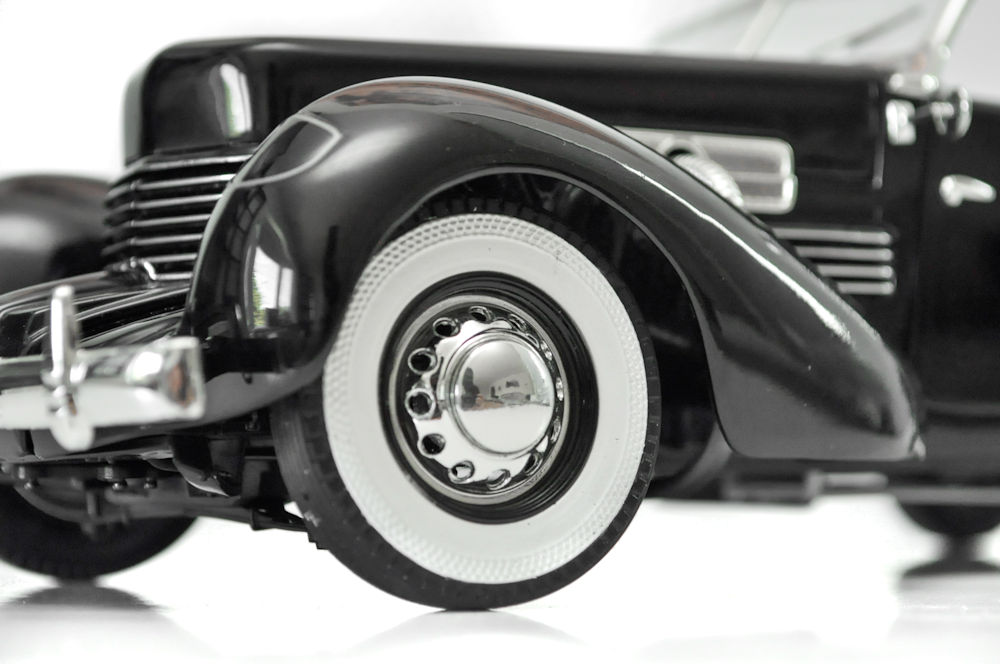 This 812 doesn’t lack quality, despite what its $40 price tag may suggest. Starting at the front bumper, it’s chromed over just like the full-size car, with the back in body colour. While that may look like a cost-cutting measure, it is what you’d see on its full-size counterpart. The Cord logo is placed front and center and, while a bit small, it’s legible. The prominent license plate isn’t something I’d want if I owned the real car. 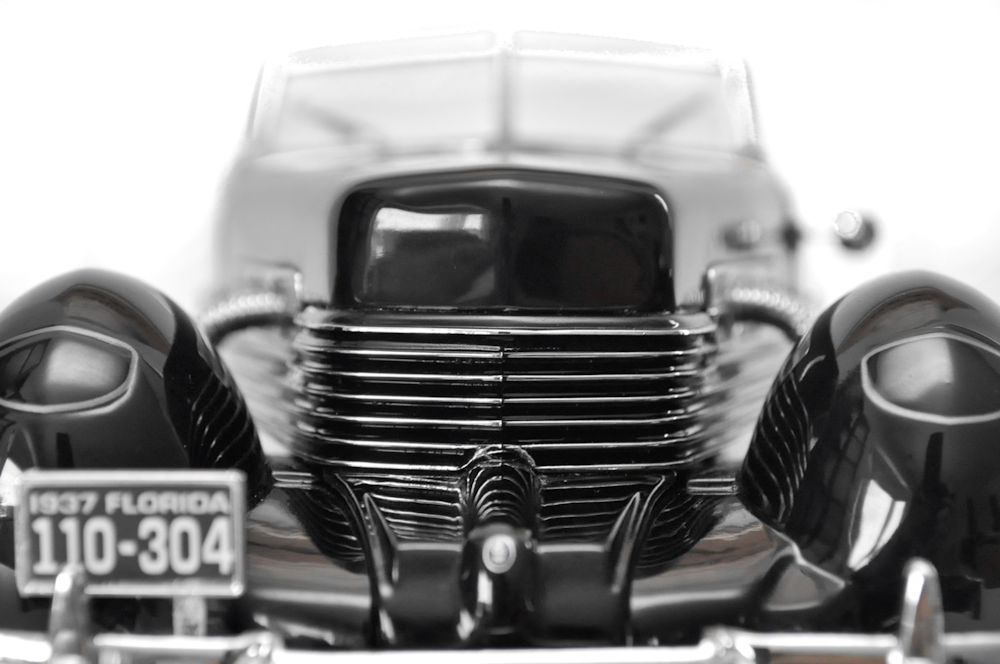 This Cord’s wide fenders, a styling cue found on most cars from this era, really stand out. The manifolds that stretch from them to the engine are also chrome and look fabulous. Another detail I appreciate is the realistic door handles. Unlike Welly or higher-end Bburago models at this price range, the Cord’s door handles are actually usable and attached sturdily.

The rear end is just as well-made. The trunk shut line is perfect as are the beautiful rear fenders. The taillights, too, are very high quality and nicely sized. Other detail-oriented items such as the gas cap and rear bumper have a nice level of intricacy. Very nicely done, Ertl. 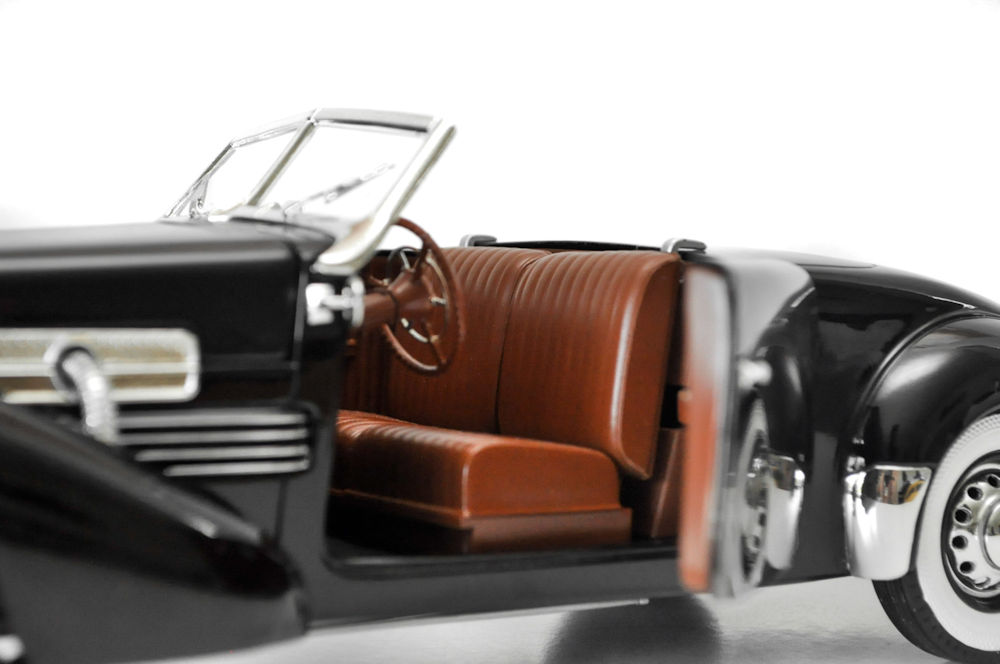 Open the Cord’s menacing suicide doors, and feast your eyes on the absolutely beautiful brown “leather” interior. While there are some missing details (I’ll elaborate on them in the section after the next), the adjustable seats make up for that. Ertl even included the oddly placed gear shifter, although it is not labelled.

A few other minor features that my OCD-self adores are the well-made door sills. The perfectly painted window crank, door handles and texturing on the door’s “leather” all look terrific! 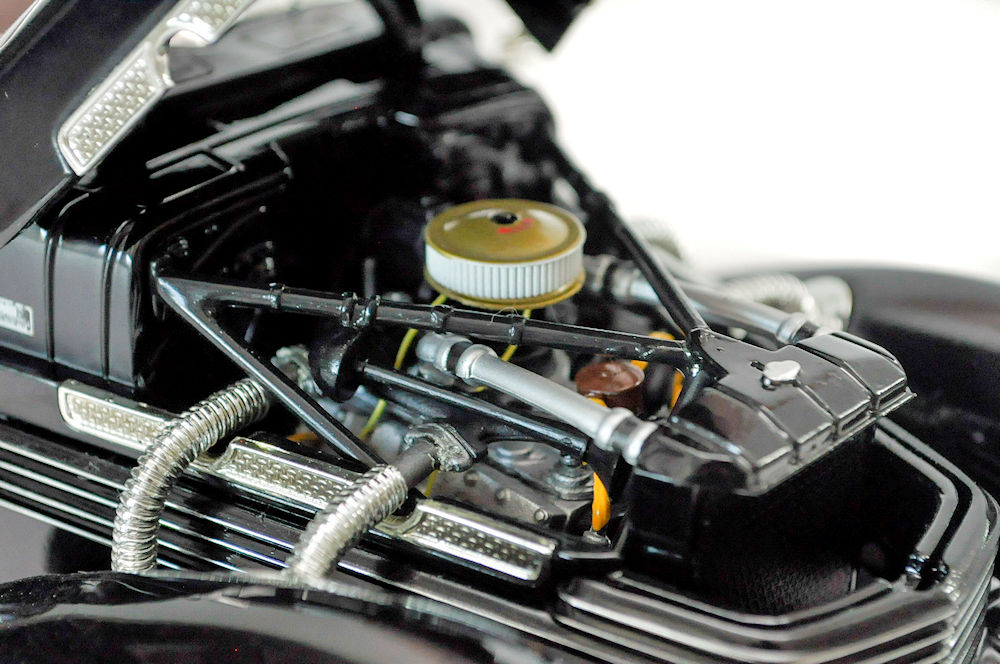 The engine really shines when compared to the other sections, even though it’s the only place without any chrome. The hood latch is visible, as is a nearby plaque reading “Cord Front Wheel Drive.” Fun fact: the Cord 812 was one of the first American FWD cars. Back to the engine: It also features excellent detail on numerous wires/hoses, the air filter, and the engine block. I’ll let the under-hood pictures do the rest of the talking

I love the Cord but there are a variety of small details that Ertl could have focused on to make this 812 perfect. 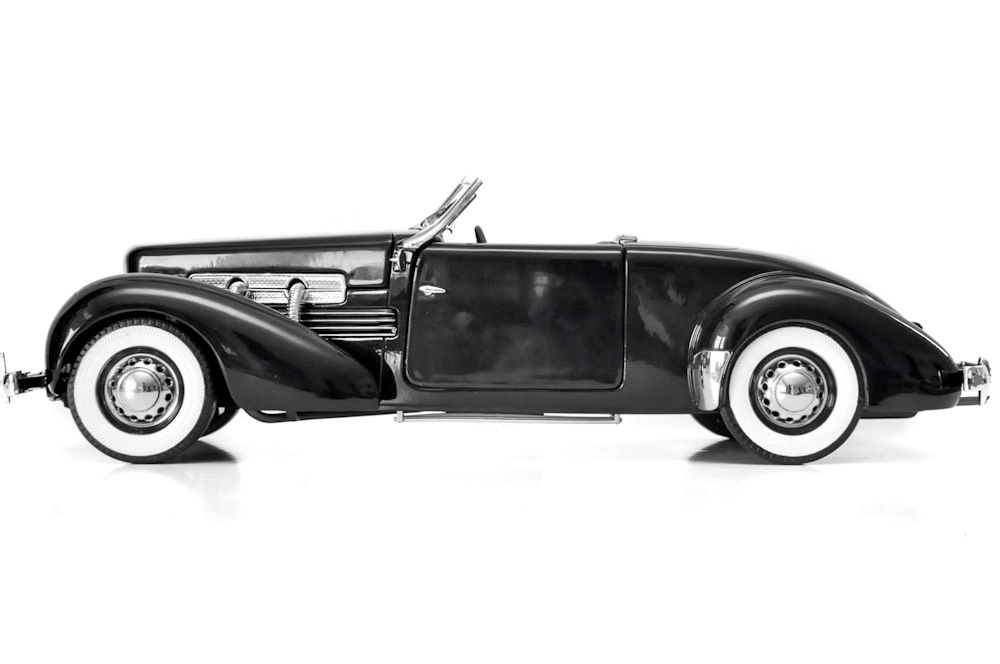 Camber: While nearly perfect in condition, this model was bought lightly used so there is mild shelf wear and a load negative camber on the front wheels. That means the car has been sitting under its own weight long enough for the wheels to bend inwards. While just about any scale model from Maisto to AUTOart get camber at one point or another if you take them off of the baseplate, this model was clearly on display in the first owner’s home and the camber proves it.

License plate: Cars of today look cleaner without a front license plate as well as back in the ‘30s. This Cord, unfortunately, not only sports one, it sports two poorly made, plastic-y, chrome plates in both the front and rear. If I had any say in the making of this model, I’d pass on having a front license plate, or at least make the plates to a higher quality. 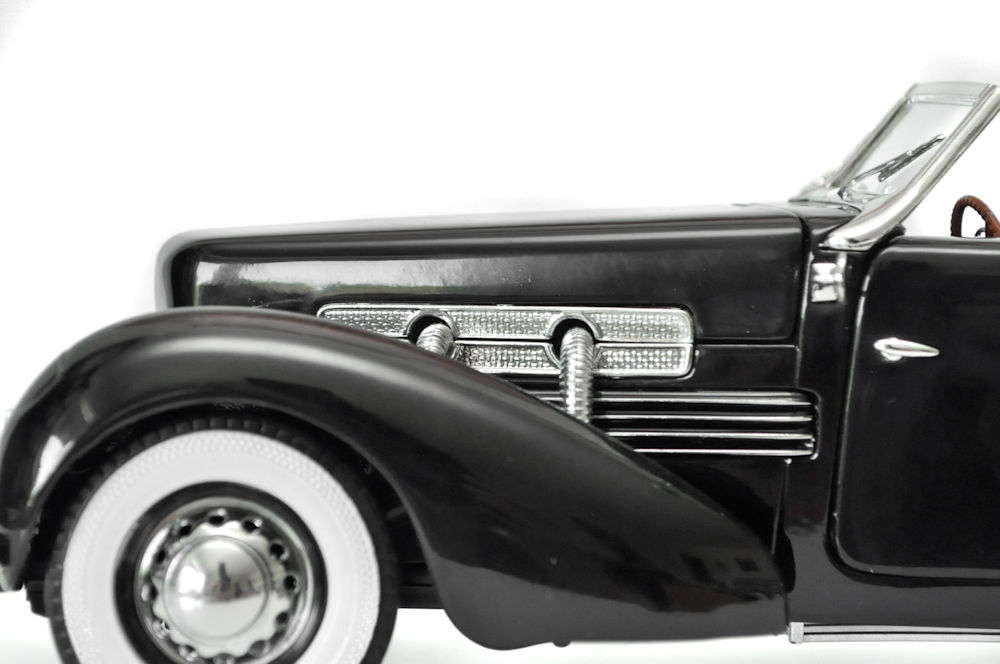 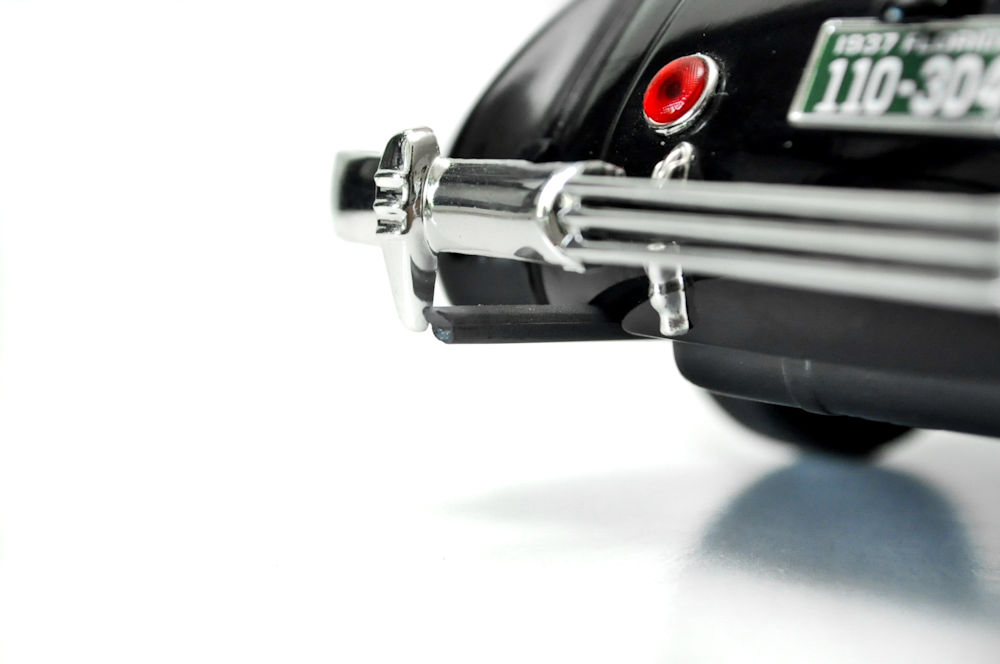 Exhaust: Unfortunately, the exhaust pipe is a piece of loosely mounted grey plastic with little depth in the pipe itself. From a distance, it looks acceptable, but up close quite the opposite. Its lack of depth kills me.

Door hinges: Immediately after opening the suicide doors you’ll see the large hinges. It pains me to say this about such a gorgeous car, but hinges of this size at this price aren’t acceptable. They are arguably worse than those found on entry-level Maisto Lamborghinis.

Floor mats: Because of the missing floor mats, the ground is hard black plastic. That’s something you would find on a cheaper model. 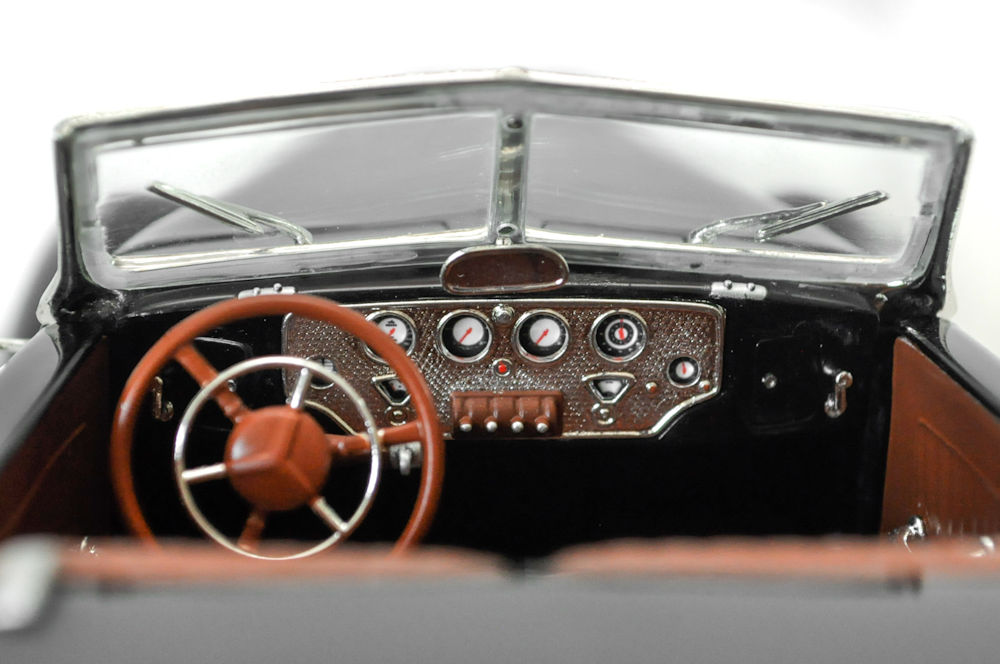 Gauges: Yes, the gauges themselves are included, but not labelled at all. Not the speedometer, tachometer, nothing. One of the worst corners to cut, in my opinion. 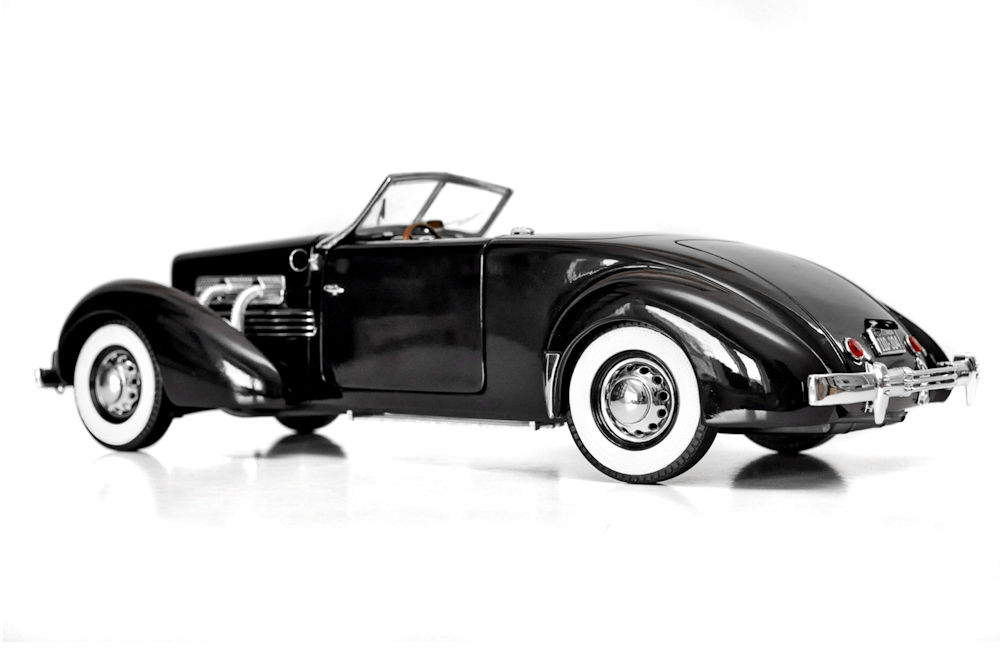 Despite the fact Cord is an automaker I barely know, the car is a car from an era I don’t collect and made by a manufacturer I’ve never purchased, I’m very partial to this car. It’s beyond good looking, is recreated nearly perfectly and came at a price point that makes it one of the least expensive in my collection. Great quality-price-ratio! If you enjoyed this car just as much as I did, there are plenty of listings on eBay for a similar price. I highly recommend it!