Overshadowed by AUTOart and in some cases budget-friendly brand Norev, Minichamps lost its reputation for quality and value.  The main reason, in recent years this once-proud manufacture as known as Paul’s Model Art has almost completely abandoned the traditional full access, diecast metal model in favour of static, lower quality resin or metal examples.

One category that I’ve found myself interested in is their array of Bugatti models, more specifically Minichamps actually made quite a few of these French hyper-GTs, like the SuperSport, Grand Sport, L’Edition Centenaire, and the regular 2009 Veyron that I’ll be reviewing today. 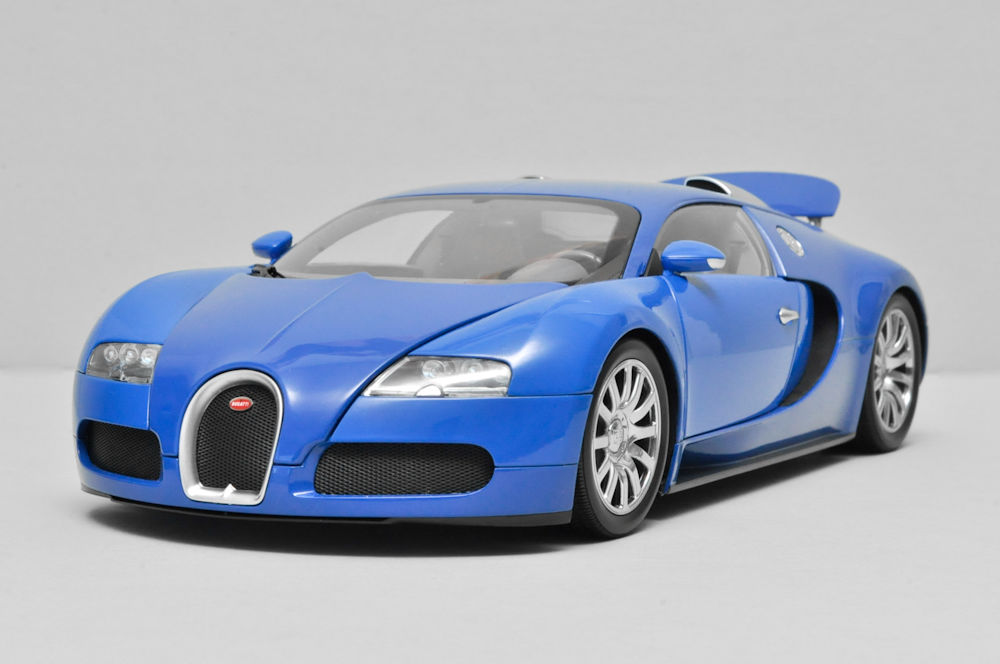 I’ve heard quite a few things about Minichamps’ Veyrons, and as a Bugatti fan, I’ve been wanting to get one of these to better the French model drought in my collection. Luckily, this was, and still is, on sale at Diecast Models Wholesale for a very pretty penny. Fifteen thousand pennies at that, or $150. That sounds like a lot, but it is on sale for $220. As per usual the ordering process was easy and after four days of waiting the model arrived on my doorstep. Is Minichamps as underrated as I once thought? Let’s find out.

When I’m paying $150 for a model, my expectations are high as I also take into consideration the original $200+ price. I was hoping for quality on par with AUTOart Signatures or higher-end Kyosho models. I soon found out that Minichamps did quite a nice job in meeting these expectations and in some areas going beyond them. 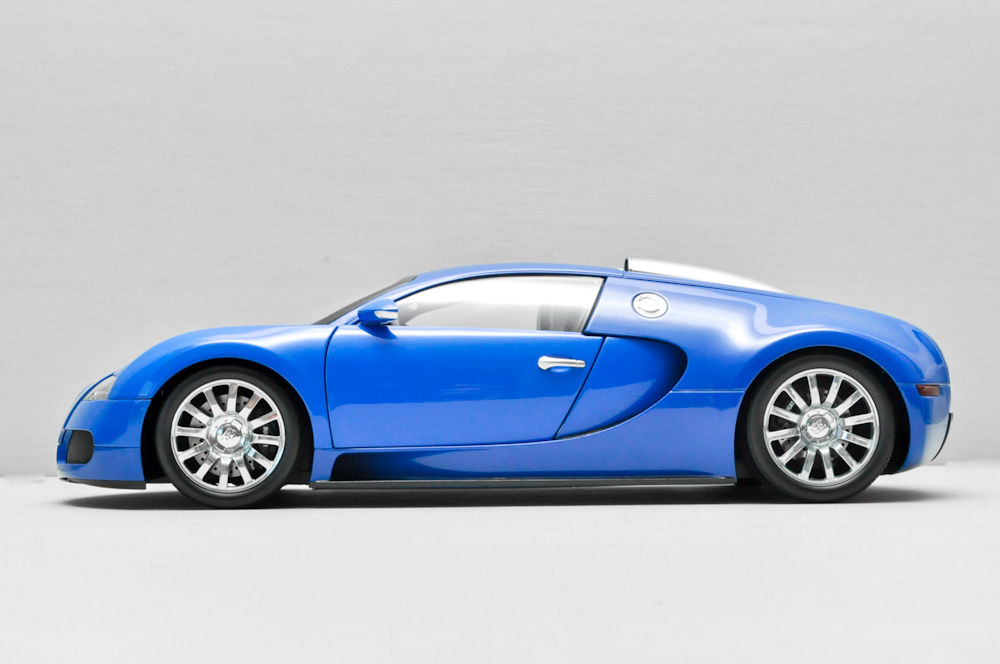 Upon arrival, I quickly noted that the Veyron packaging is a large step up from Minichamps’ sealed models. The boxing shows many photos of the car, including the side profile.

The grille and surrounding vents are perforated, as are the side vents and roof intakes. The rear wing activates at the push of a pin found under the car and can be positioned as an air brake. Minichamps also give access to the interior and front trunk. Interestingly, while the engine is visible, the cover doesn’t detach as it does on the AUTOart rendition. 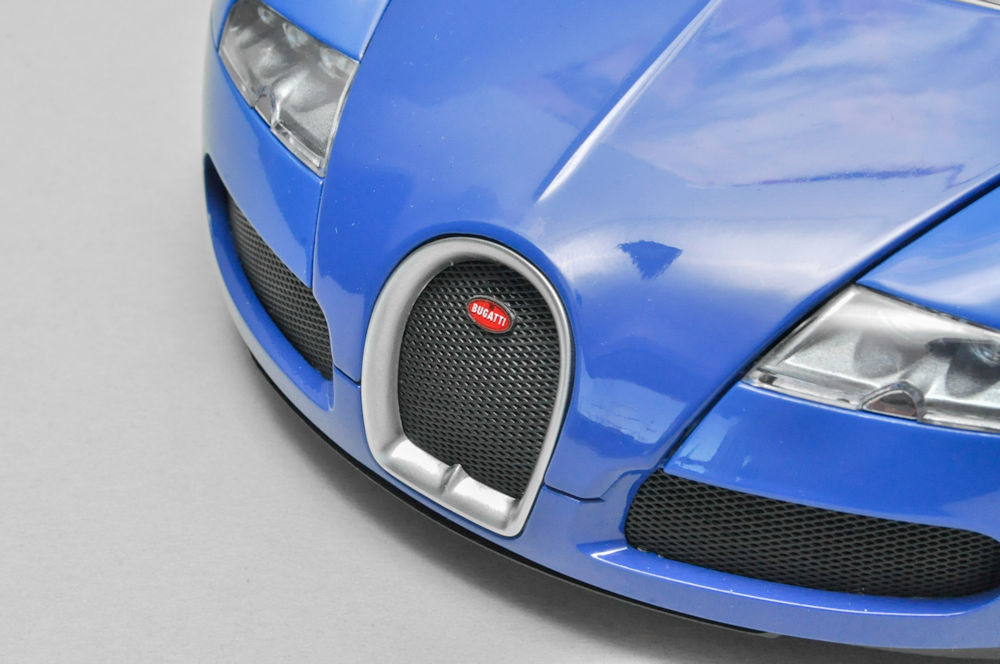 The exterior recreation is nothing short of fabulous. Perforation for every vent perfectly recreated badging, as well as a very tasteful specification. The light blue/darker blue two-tone paint compliments the quintessential 2000’s styling. Bugatti’s signature chromed Veyron rims tie everything together. Minichamps also did a really nice job recreating the *massive* ceramic composite brakes. The brake calipers have the Bugatti script written across them and are very detailed overall. Perhaps the best feature upfront comes on the Veyron’s nose where Minichamps did a wonderful job with the headlights. Each individual light bulb is recreated, and Minichamps did a great job avoiding the all-too-common plastic-y look on the lights. 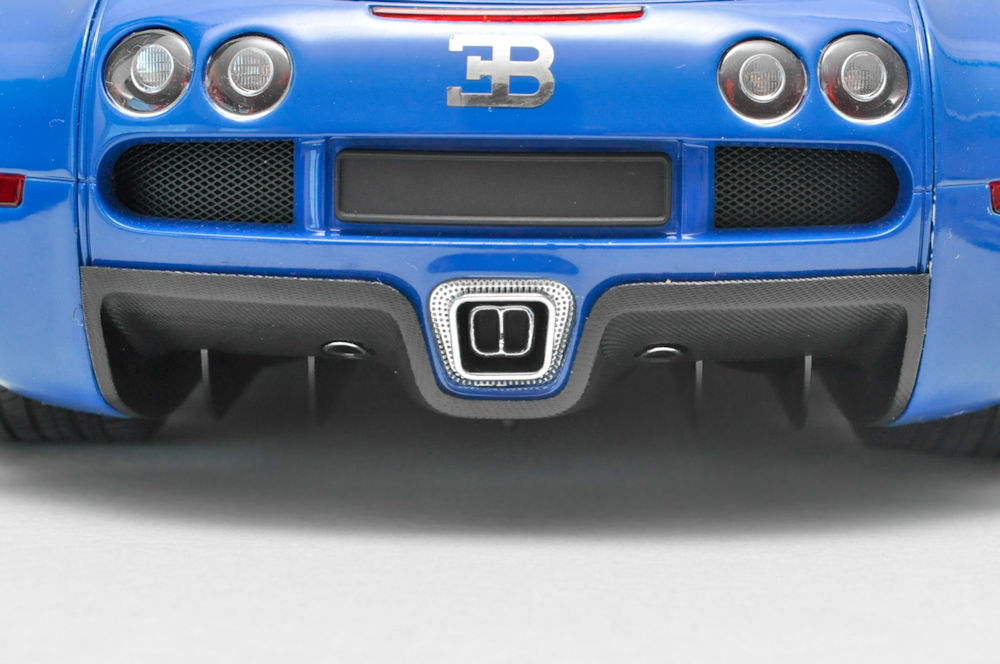 I am amazed that the level of attention Minichamps paid to the rear of this Bugatti. The “EB” logo is very crisp and tacked on nicely, the tail lights highly realistic, and the four exhaust pipes (yes four: two making up the large center pipe, one on either side of the large pipe) have good depth to them. The rear vents are perforated as well, and the pin to activate the rear wing is very discreet. The more I looked, the more I found that Minichamps is doing a spectacular job with this model. 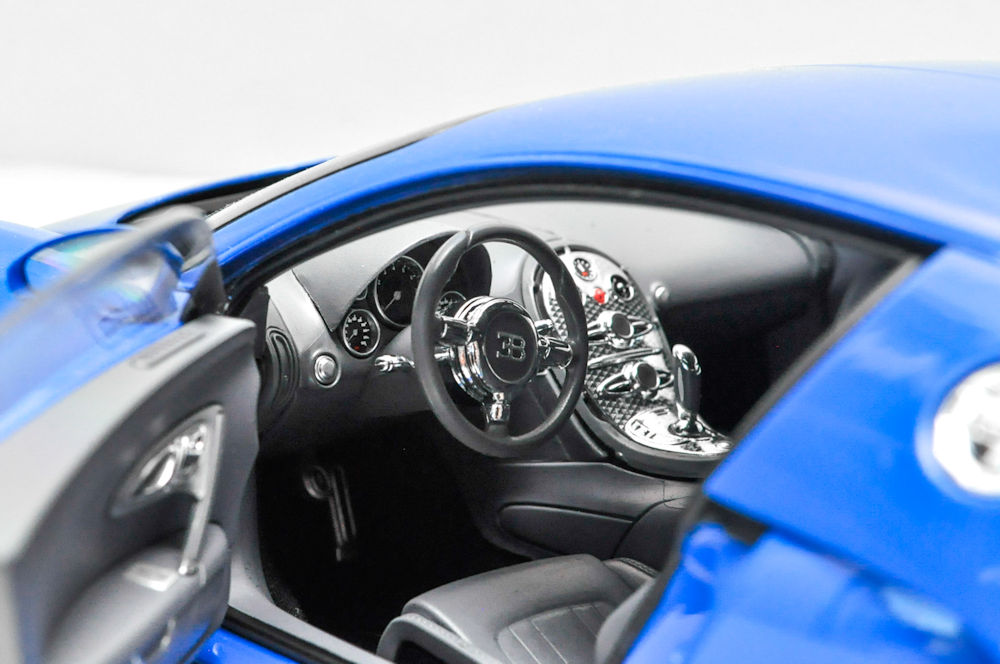 Interiors are a sensitive spot for me and can often make or break my review of a diecast model. I have to say that I have no problem highlighting that Minichamps did a phenomenal job recreating the interior of the Veyron. Minichamps included carpet and fabric seat belts. The steering wheel is complete with stalks, buttons, and the “EB” Bugatti logo. The gauges are also on par and fortunately don’t look like the inexpensive stickers I have seen from other manufacturers.

The center console is undoubtedly the best portion of the recreated interior. The carbon fibre decal is nicely done glossy recreation instead of the often-used and lower quality moulded plastic. The emergency light button is included, painted in red, and so are air conditioning vents and other various buttons including one to start the engine. 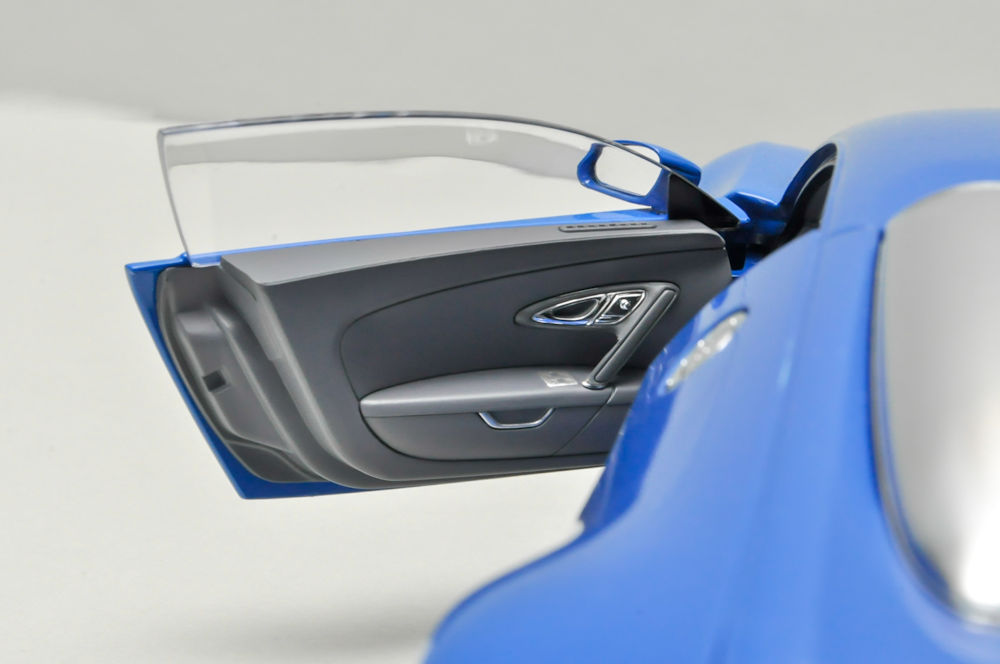 The door panels are very highly detailed, with chrome door handles and window controls among other things.

The Veyron has a monstrous 8.0L quad-turbocharged W16 that was actually made in part by Volkswagen. While Minichamps doesn’t give you full access to the massive power plant, the Veyron’s engine bay is still visible. Minichamps provides detailed cylinder rows, with “EB” and “16.4” (for the 16 cylinders and four turbos) written across them. There isn’t a lot to show from the engine perspective as the compartment isn’t fully open. If you are looking for more engine access, you may want to spend some extra cash and get the AUTOart Veyron with a removable engine cover. 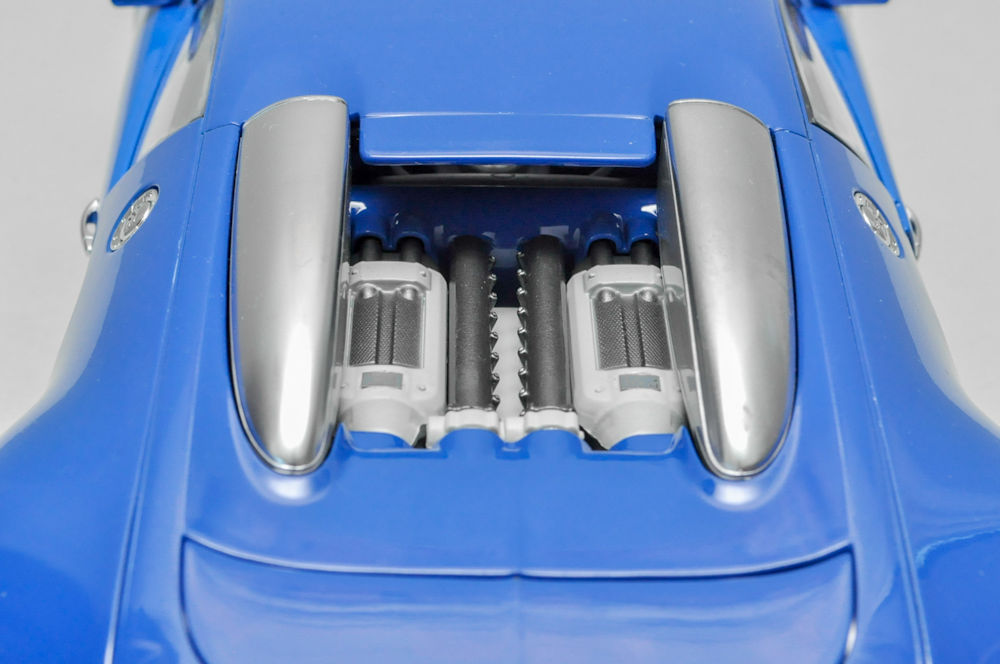 I love the model but there are a few small things that Minichamps could have focused on to make this Veyron perfect.

Camber: As I’ve said a million times, just about every single model gets camber sometime in its lifetime but to have this one cambering less than a week out of its box is a major disappointment. It’s especially bad given that I only have the styrofoam base plate that comes in the box to display this model and who wants to look at styrofoam?

Interior “EB” logo: Companies such as Bugatti go to great lengths to develop a logo that catches the eye and represents the brand. Bugatti has a nice one with its “EB” and displays it in various places on the Veyron including a bold one in the cabin. Given how much effort had to go into creating the logo, I found it incredibly odd that Minichamps could screw it up so badly by placing it upside down in between the driver and passenger seat. And it isn’t a small logo, no no no, Minichamps had to screw up on one of the most noticeable logos on the entire car. 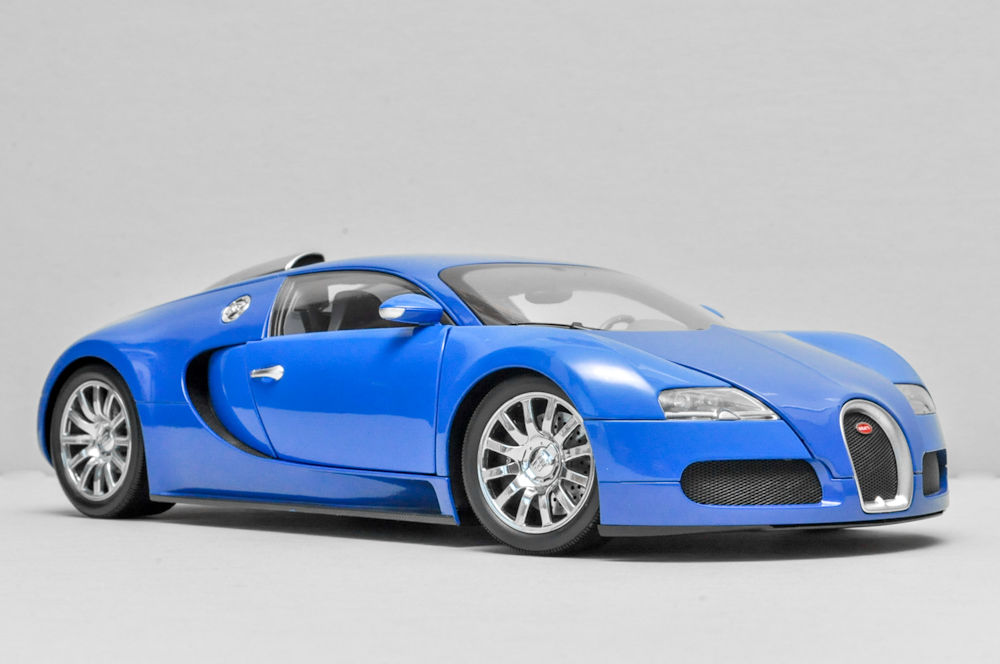 Engine cover: As mentioned a few other times in this article, the engine cover is fixed on this model. No doubt I would have preferred otherwise.

Well…  I have to say, there just isn’t a lot to hate on this Minichamps’ Bugatti Veyron and coming from me that about says it all. Sure, there is the annoying lack of a removable engine cover but that is overcome through the inclusion of perforated vents, excellent shut lines, a carpeted interior, and a seamlessly working spoiler all at nearly half off the retail price. Diecast Models Wholesale still has it on sale for $150, a steal knowing that it can fetch upwards of $300 elsewhere.

I definitely recommend this model for those who don’t want to pay $300 for AUTOart’s Veyron and are happy to spend a lot less and still get quite a bit.