I am a traditional diecast collector. I rarely prefer resin, composite, or sealed models. Just metal cars with opening parts. That’s my cup of tea, or at least it would be if I actually drank tea. Given this, it shouldn’t be a surprise that all my entire collection – minus one composite AUTOart Aston Martin Vulcan – is all metal and all opening parts. Simple.

But curiosity is a powerful thing. With sealed metal and resin models flooding the market, I thought I’d get my hands on one just to see what the fuss is about. Minichamps offers an array of them, probably more sealed models than opening models at this point, and the price is right on many of them. Sealed 1:18s by Minichamps can be as low as $50, and they provide the same level of detail on their opening models that are often cost double the price. 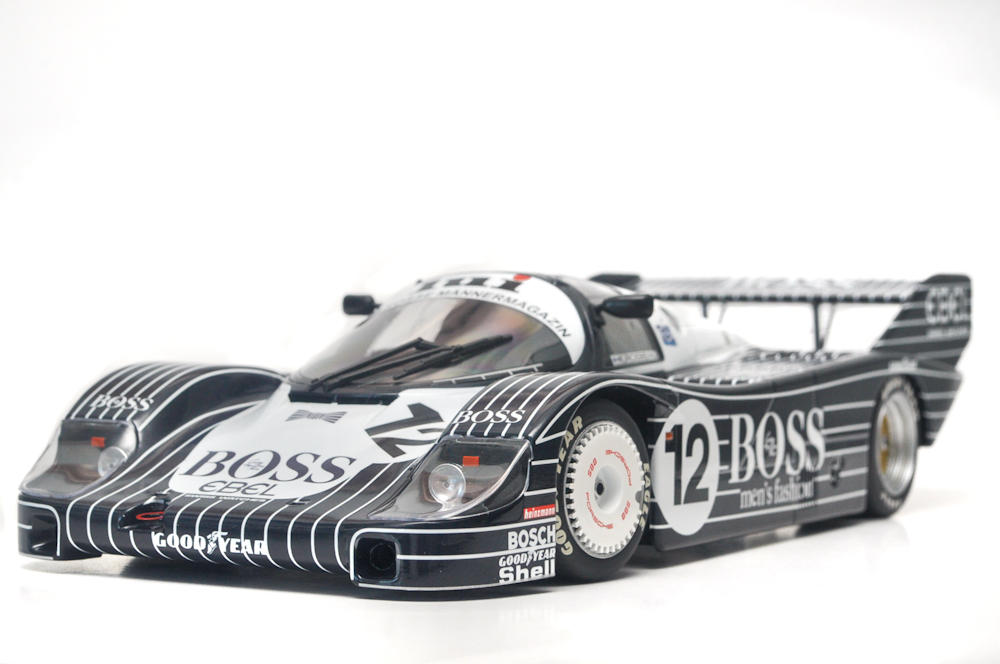 So I went on the hunt for a sealed Minichamps 1:18 Porsche 956, the Group C prototype, and the pinstripe-covered Hugo Boss-livered one at that. Of course, so was everybody else and I soon found that it was sold out or savagely expensive. Luckily, I got a hand from a friend who was able to ship one my way. Thanks, Sean!

I’ve seen what Minichamps is capable of when it comes to quality. After reviewing their 911 GT3 Touring, I knew The Boss car would be special.

Things didn’t get off to the best start once it had arrived. I’m one of those guys who enjoy the unboxing process and I appreciate good design on the packaging. I was expecting what I liked from previous Minichamps’ opening models having already seen their packaging. Those have a cleaner, well-thought-out box design. You’d think the “outerwear” for a car inspired by a clothing designer would have some style. But nope, Hugo’s car only got a bit of text and the Minichamps checkered flag design. 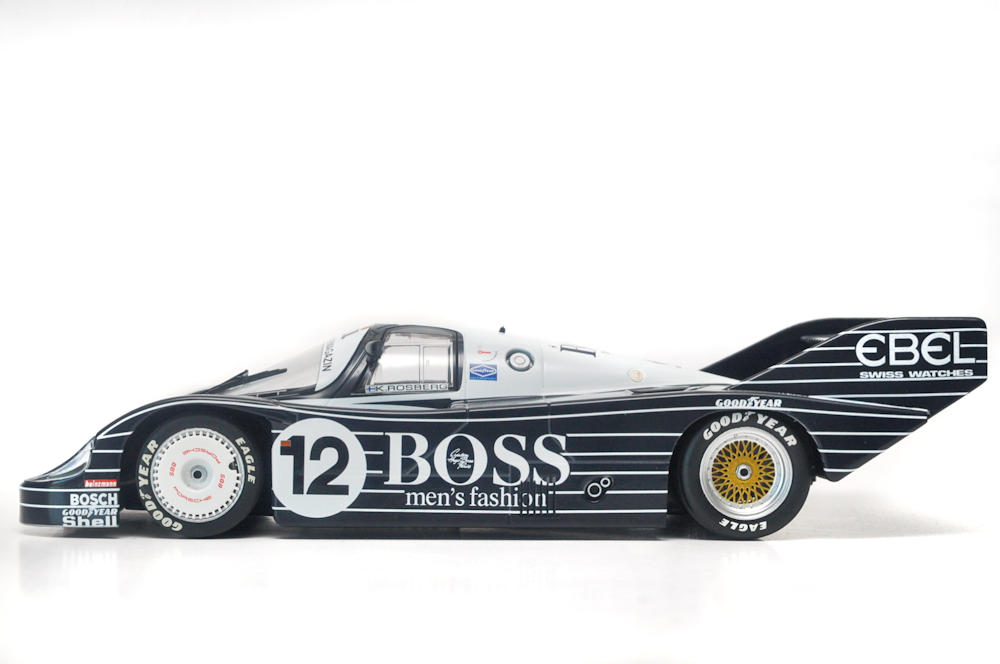 Once unboxed I visually examined my new ride and quickly came to realize that with no openings it’s more difficult to see the car’s interior. Not that there’s much to see anyway as it’s gutted to ensure lighter weight. As for the detail, Minichamps didn’t cheap out. The stripes are very intricately painted in most parts of the car and the gold rear wheels look excellent on the black body. My initial expectations were in line with the $100 retail price. 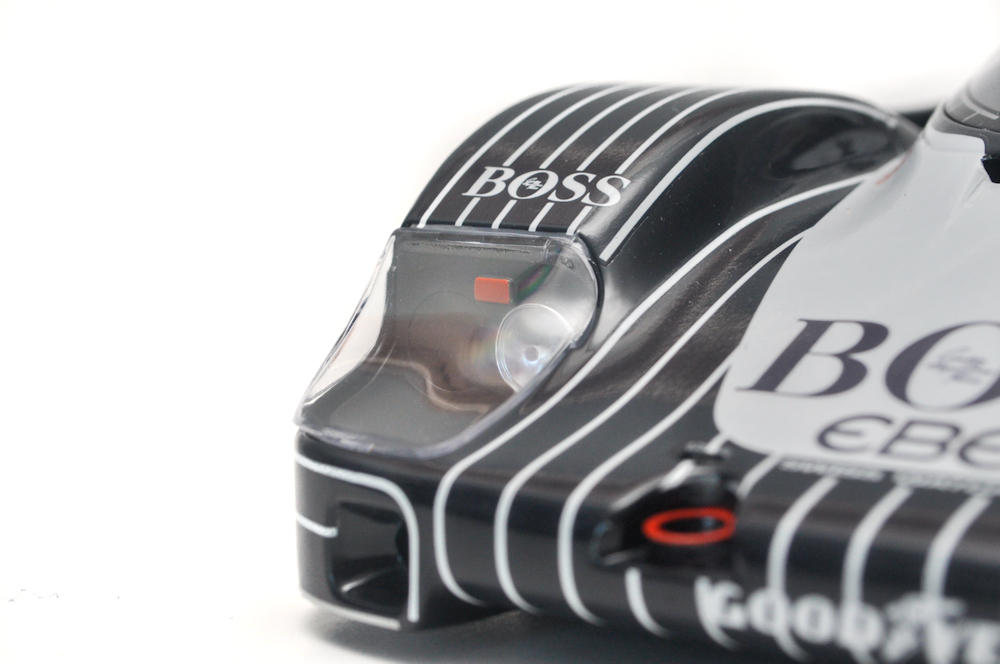 While I don’t have many motorsport cars in my collection, I know a good diecast and I can say confidently that Minichamps took their time when designing and manufacturing this model. The contrasting colour combination is on par, as well as the crisp shut lines. The front vents below the headlights are very deep, although the paint runs a bit thin around the edge of the hole. Luckily the headlights compensate. While they are plastic, the detail is spectacular. I especially love Porsche’s BBS wheel covers which tie in the motorsport feel.

The quality too is just as good in the front as it is with the rest of the car. I am very impressed with the precision of the windshield vinyl and Hugo Boss text on the humongous rear spoiler. It’s too bad that the stripes going around the wing don’t line up properly as you’ll notice in the photo of the car’s rear end. Lastly, the slick tires are perfect, along with the fog light and tail lights. 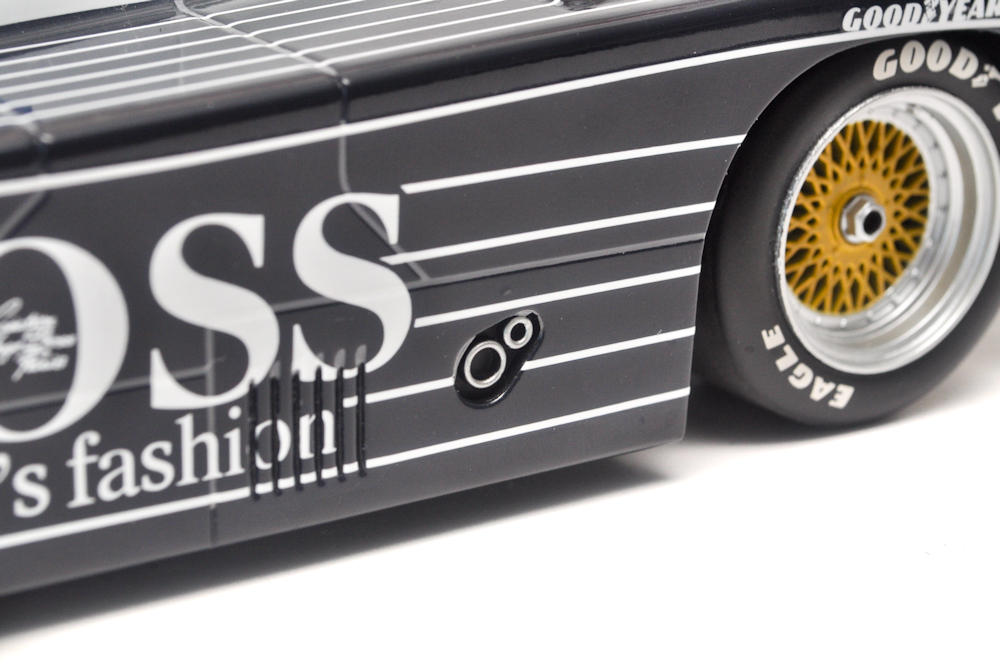 I have a few other (very avoidable) nits to pick with this car in when it comes to the radiators, exhaust pipes, and steering. Found beside the passenger and driver area, the radiators are recreated as grey plastic squares with lines across them. Not acceptable for such a visible feature. The exhaust pipes too. They are just two silver circles painted on a black piece of plastic. Lame. And the wheels don’t steer “tightly” for lack of a better word, despite the underbody suggesting that they should be able to. 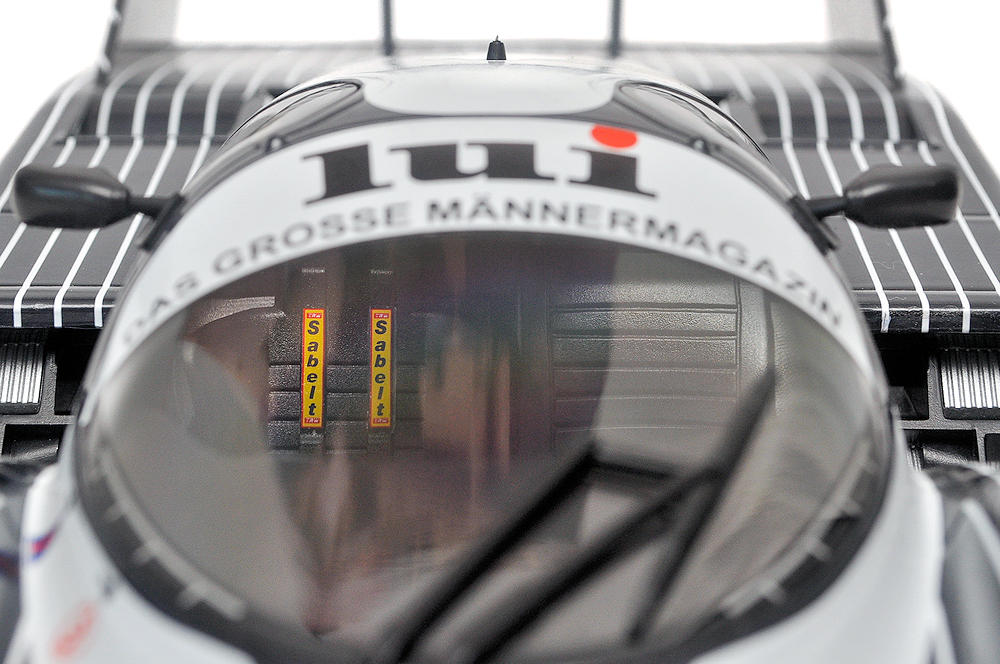 In Porsche fashion, weight reduction was key when making the 956. So, the interior is very bare. Only two lightweight seats, a racing harness, a shifter and some gauges and buttons are included.

With very little to recreate it’s no wonder Minichamps nailed it – almost completely. The MOMO steering wheel is branded and nicely so, but appears slightly too small. The Sabelt harness too looks phenomenal as it should; fun fact retail for a new Sabelt harness can be as much as $550+, or five of these models! But here is another one of those nitpicks that I just don’t understand. The gear shifter and “center console” gauges are detailed and labelled. OK, check. But the graphic reproduction is the equivalent of the sticker approach you’d find on a lesser Maisto 1:18 model. Yes, I’m that picky but I would guess that’s not what most people would expect at the $100 price point. 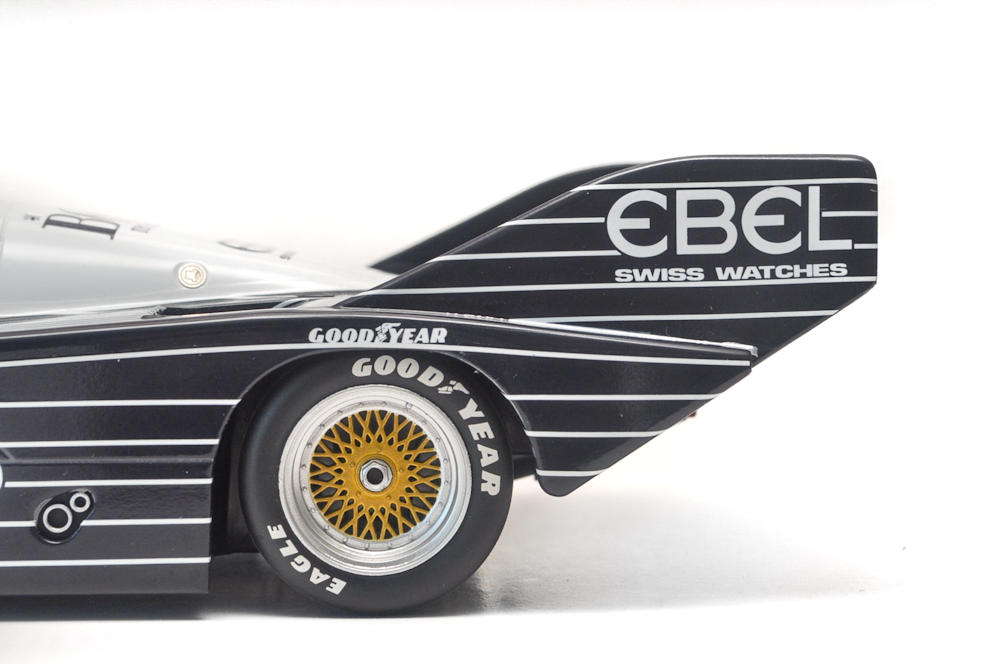 It’s great to have The Boss in my collection. It looks quite fashionable lined up next to my other Porsches. A quick note to the manufacturer: Oh, Minichamps. Minichamps. Minichamps. Minichamps. As much as I enjoy your models there are so many really tiny things you could easily improve on that would make your cars pristine. I’ve called out a few in this review. I wouldn’t mind spending an extra $10 to cover manufacturing costs and getting a bump up to the overall quality level of the AUTOart Performance line or an entry-level GT Spirit. That said, The Boss is a pretty darn cool diecast. Want to have a Porsche like this in your collection? Diecast Models Wholesale has many other 956s and 962s in stock.