Lada Niva may not be the fancy SUV with a hundred gadgets but is a very capable little SUV on a budget that will go almost anywhere. After all, Russian Antarctic Expedition has ventured to the Niva in freezing temperatures of over -50 degrees Celsius for fifteen years – that is definitely an accomplishment. Introduced 45 years ago, even looking at it today it does have that classic look. I feel it is a design that ages very well – sort of like the design of the Jeep Wrangler or Land Rover 90. Originally intended as a farmer’s vehicle, it soon became the economical vehicle built for the masses. Let us not forget, it was the first mass-produced unibody off-roader. With around 650,000 Lada Niva SUVs produced in its lifespan, I would say it was a popular little SUV. 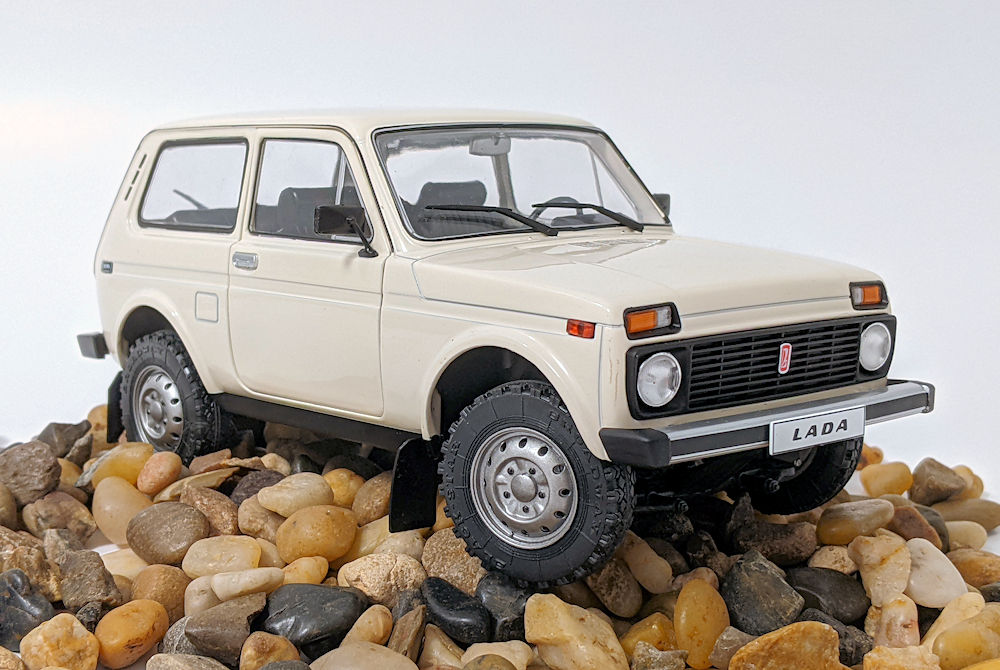 Solido decided to replicate this little off-roader in 1:18th scale and today I am going to review it. As one of their newer offerings, this model comes with a calendar – definitely, nice addition and I hope they will include them with models for years to come. It is a great marketing item for Solido and at the same time a great addition for a collector. Not only to remind them which model to buy next, but also as a little history of Solido models produced in a given year. 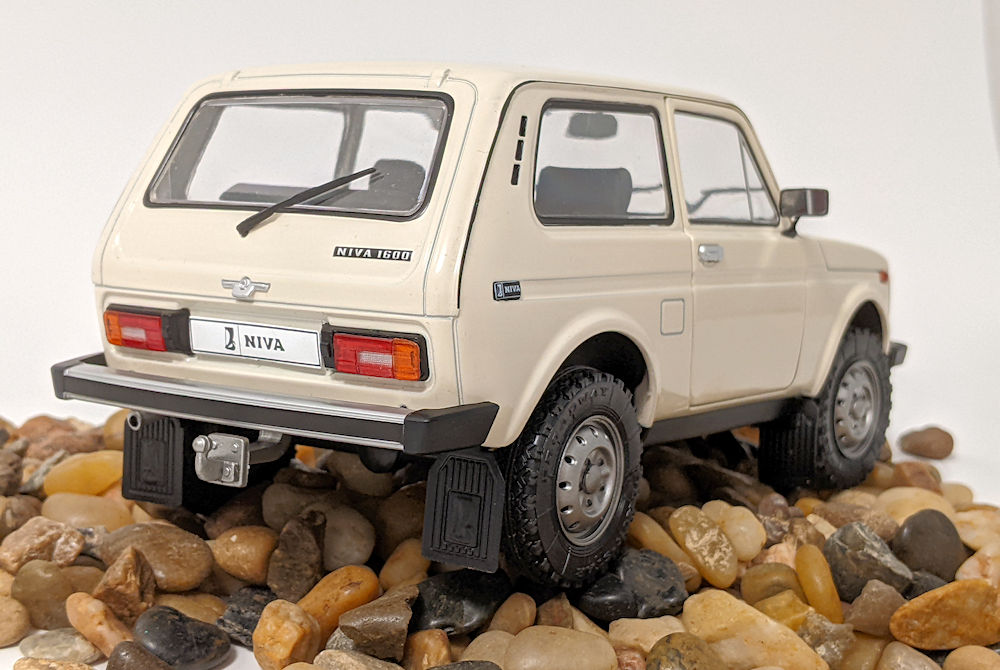 Moving on to the model – my first impression is positive. I do like the colour choice and the overall spec. The cream-white non-metallic paint looks very good – it is smooth and uniformly applied all around the model. Even the black painted accents around the water drain and vents are nice and tidy. The body is constructed with die-cast metal giving the model some nice weight. Other bits such as bumpers, mirrors and wipers are plastic components. One thing to keep in mind when unboxing is to be careful not to grab the model by its bumpers. You have to remember the model is heavy and the bumpers are lighter plastic pieces which are held with two mounting points and will break off if you lift them by the bumpers. I would recommend holding the model on the driver and passenger sides to avoid any damage.

Since this is a little SUV, I could not help myself and run out to get some rocks to give it some off-road diorama look in the pictures – I hope you like it. 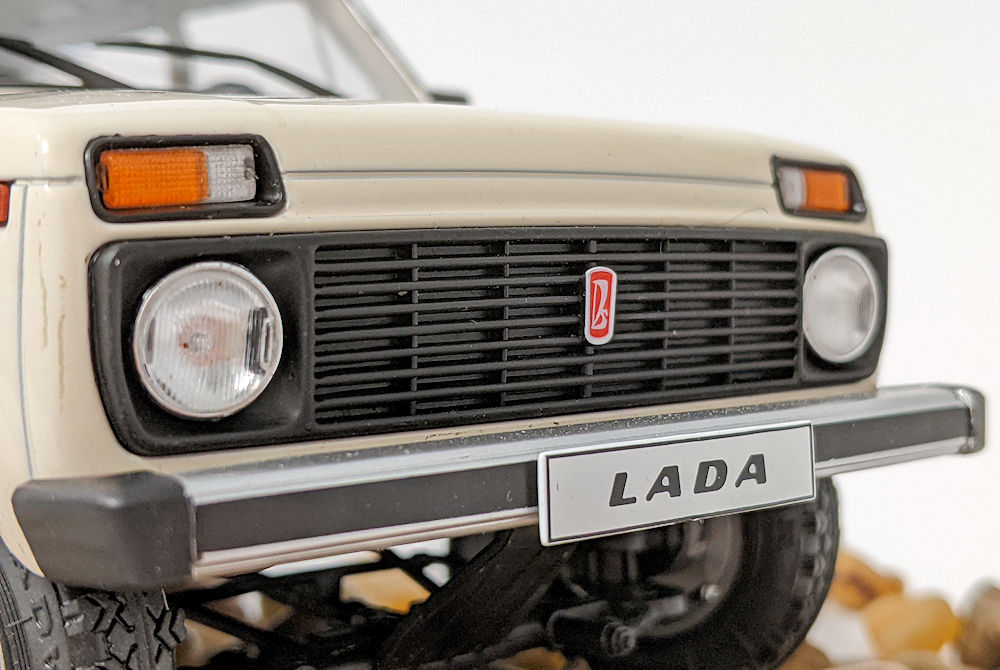 At the front, the model looks very clean as it does all the way around. There are no perforated grilles but the solid plastic pieces are well done. They show nice depth and look very clean. It is an uncomplicated front end and I think it looks great. A Red and silver Lada emblem is present, and headlights and orange turning signals are in place where they should be. I do like the little black painted dots on top of the windshield washer nozzles (in front of the windshield) which are sculptured and part of the die-cast mould. The engine vents have dimensions as well and the groves are painted black. Nothing to fault here – well done!

Moving onto the side, everything looks right in place from the separate piece of orange plastic turning signal to the Niva badge. I do like the silver triangle window on the side doors – definitely screams 80s to me. Mirrors are in place and come attached to the model (no assembly is required as with some Solido releases). The black trim around the windows (which is present) is right on point. Door shut lines are nice and even all around. Again, decent execution here! 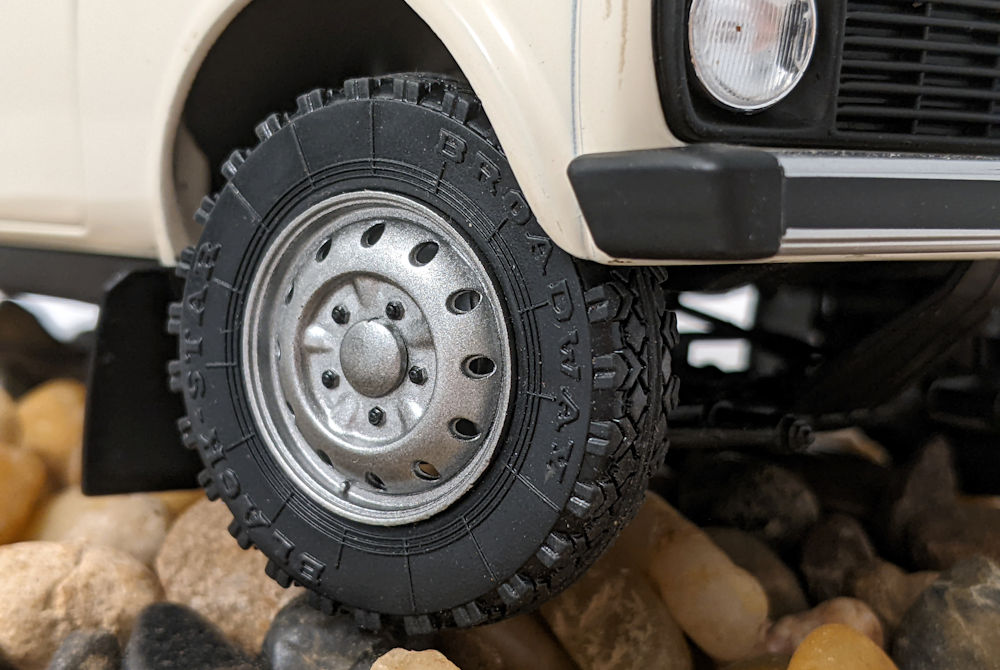 Moving onto the rims and tires, the rim design is accurate and with this design, there is no access to brake components. This is on par with the real car. Tires have tread and are labelled with Black-Star Broadway script. I did not know these even existed, and a quick Google search does indeed verify their existence. Bolts are painted black and if you look hard enough, you will notice small valve stems too. One more item worth pointing out is those large mud flaps – definitely cool! 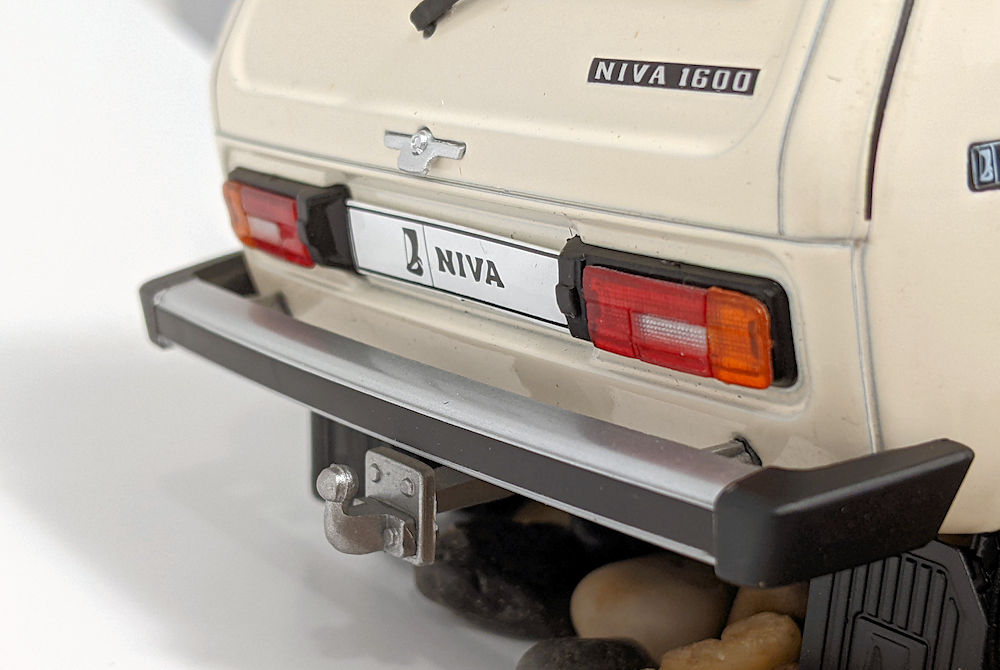 The back of the model looks just as good as the front. Again, everything is nice and tidy including the lights, wiper, a handle for the rear door, Niva 1600 emblem, and Niva license plate. The rear bumper has two anchor points and a hitch completes the package although I would not recommend attaching any heavy trailers. Looking at the model from the underside, I think it is worth mentioning the number of components present. Most budget models do not show much here, and this one does. Just take a look at the underside pictures. 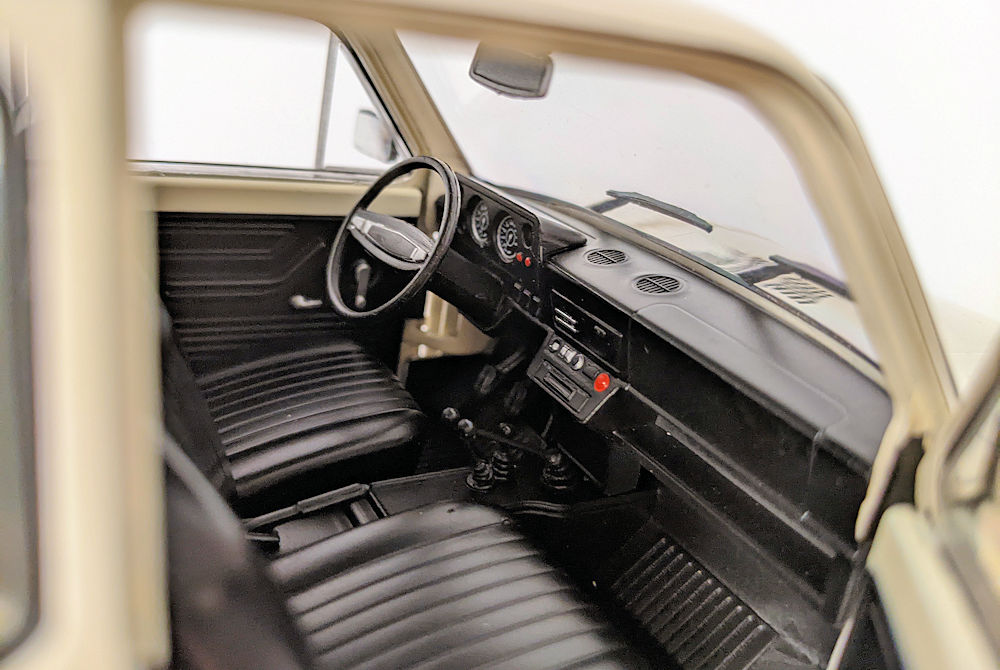 Inside, the model is on point. The real car was nice and simple and Solido replicated it well. I do love the 3-foot pedals – yes, this is a manual transmission example. I like the long manual lever to change gears and the smaller one to manually engage 2 and 4-wheel drive. Most vehicles today come with an automatic transmission, and this is a nice reminder that things used to be manual back in the day. Some slash of silver on the steering column, some red paint on the seatbelt buckles and a few buttons complete the black interior. 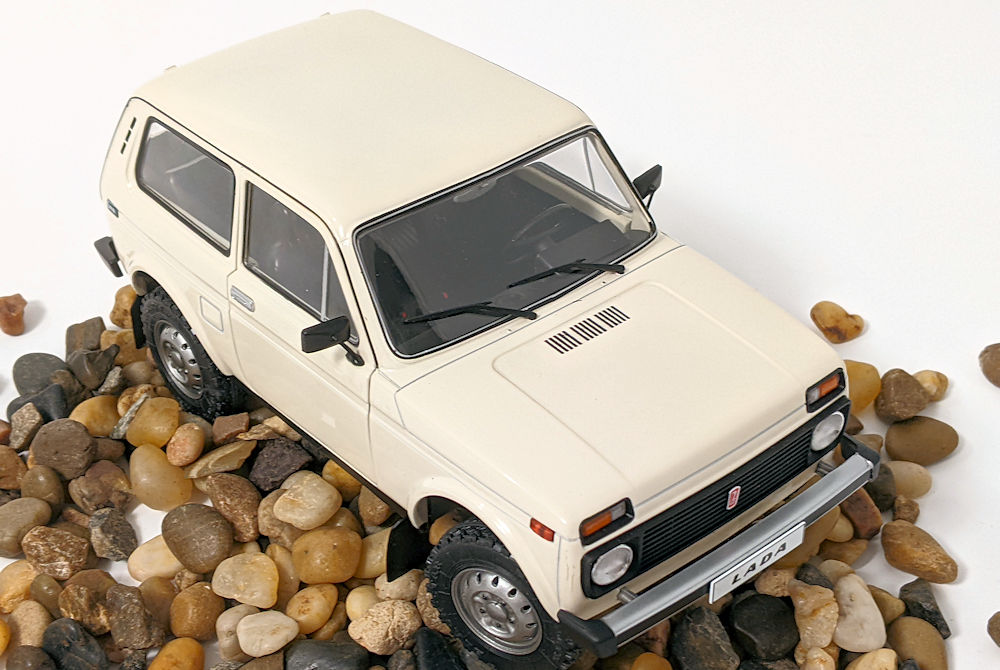 To sum things up, this Solido 1:18th 1980 Lada Niva is nicely done. It is a neat little budget SUV, made by a budget Solido brand that will not break your wallet. Some people will argue this is not a Jeep or a Land Rover. They are right it is not, and it was never intended to be. This was the little and capable SUV for the masses. Solido did really well here – I think this is a win and it does surpass my expectation for a budget model.