Here is something I have been waiting for a very long time – a BMW 850 CSi with pop-up lights. Yes, we had an opening model by Revell a long time ago, however, it did not have pop-up lights and to be honest, it looks like a toy by today’s standards. Then, we had a very nice example made by Ottomobile, but that one was sealed without any opening parts. Finally, Solido did the honours and gave us this one – a die-cast version with opening doors and pop-up lights…  and that got me very excited!

Before I begin the review, here is some background information about the real car. BMW 850 CSI (E31) was the most powerful version of the 850 series available exclusively with a 6-speed manual transmission. The naturally aspirated S10 5.6 litre V12 engine was developed and enhanced by BMW Motorsport with more power over the regular BMW 850i. And according to the numbers, it was definitely no slouch with a 0-100 km/h time of 6 seconds (that’s 27 years ago). Let us not forget that this engine was further modified and used on the iconic McLaren F1. With a small production of only 1510 pieces worldwide, BMW 850 CSI is definitely a rare sight on the roads today. Owning a die-cast model of the icon which I could look at every day is definitely a treat without expensive maintenance bills. 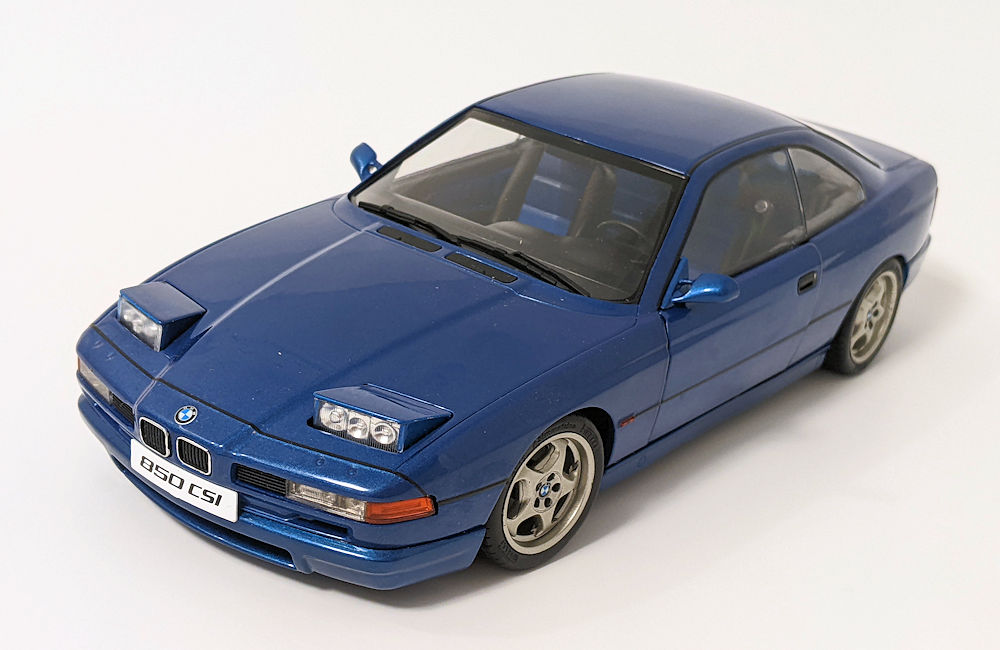 Solido included a calendar with the Lada Niva, however, it is not included with this BMW 850 CSi. Instead, they included an opening tool, which does come in handy when opening the pop-up lights (more on that later on). Looking at the model out of the box, my first expression is a big smile. Most likely because I do like this timeless design and because I just can’t wait to see it with the lights opened up (which is the first thing I did). Currently, Solido is offering a red and this blue example. This makes a decision of which colour to get definitely not easy. Today, I have the blue one for you. The blue metallic paint looks impressive on all the die-cast parts. The pop-up lights are plastic pieces and even though the paint is smooth, it is not exactly the same shade. On my example, the driver’s side pop-up light is lighter in colour than the passenger side. I think my pictures make it worse than what it really is. Looking at it in person, it is not as noticeable. For the best result, I highly recommend displaying this model with lights in the up position. 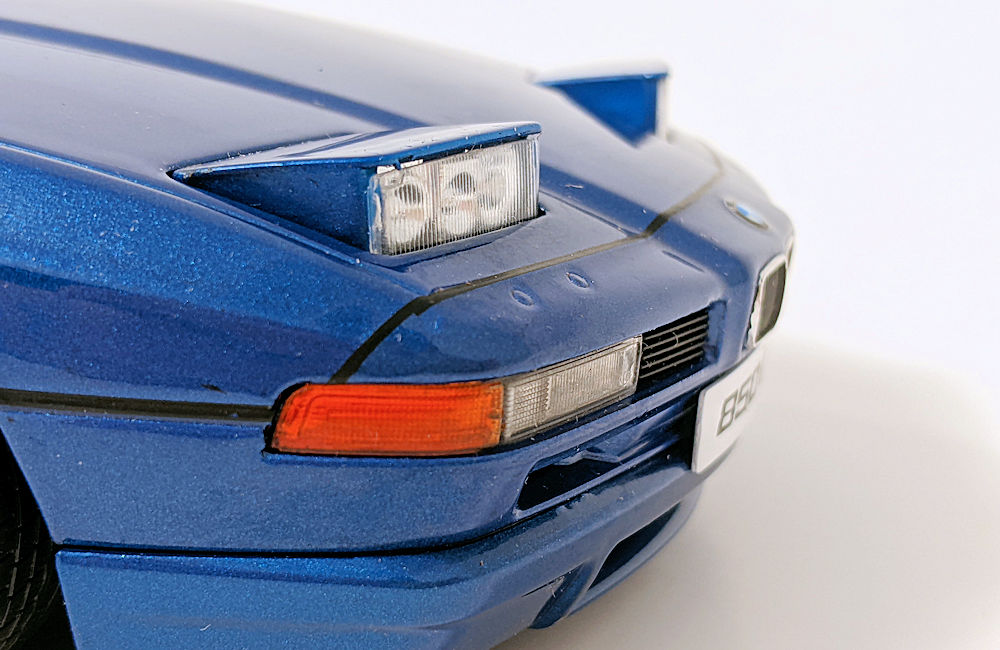 At the front, the model looks good. Perforated grilles are not present but the solid plastic pieces show depth and look clean. The two openings in the bumper under the daytime running lights are present and indeed not sealed. This is accurate to the original. Silver outline of the “BMW kidneys”, BMW badge, daytime lights, orange turn signals, headlight washers and 850 CSi license plate completes the handsome package. And now the best part – the pop-up lights! They look super cool in the open-up position and that is how I will display the model. This is where the supplied opening tool comes in very handy as there is no open switch on the bottom of the model. To open the lights, you use the tool to lift them up one at a time – this process does not bother me at all. If I have to be picky and look for faults, both are not equally levelled to the hood of the car, but it is not something to deter me from getting this wonderful model. 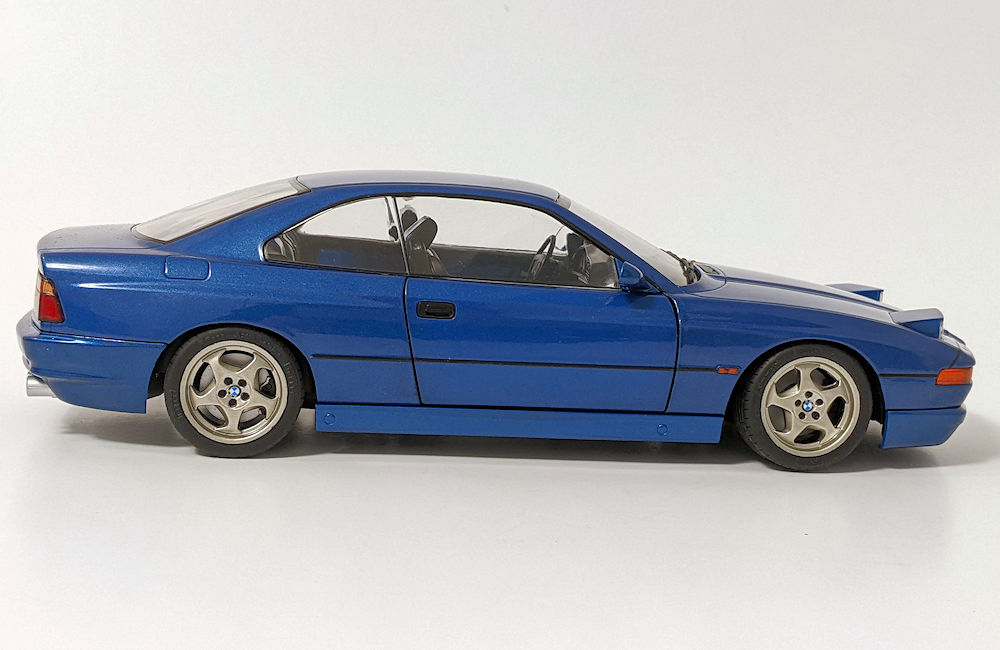 Moving on to the side, again everything looks right in place including the orange plastic turning signal, black door handle, silver key lock, and the horizontal black line that runs through the side of the car. I absolutely love the frameless windows which give the car a clean undisturbed look just like on the real one. The “//M” style mirrors complete the look – those mirrors were a popular copied custom modification on non-BMW cars back in the day. They were definitely one of the most beautiful mirrors fitted on a production car back in the 90s. Door shut lines are quite decent and the closed window creates a tight seal. 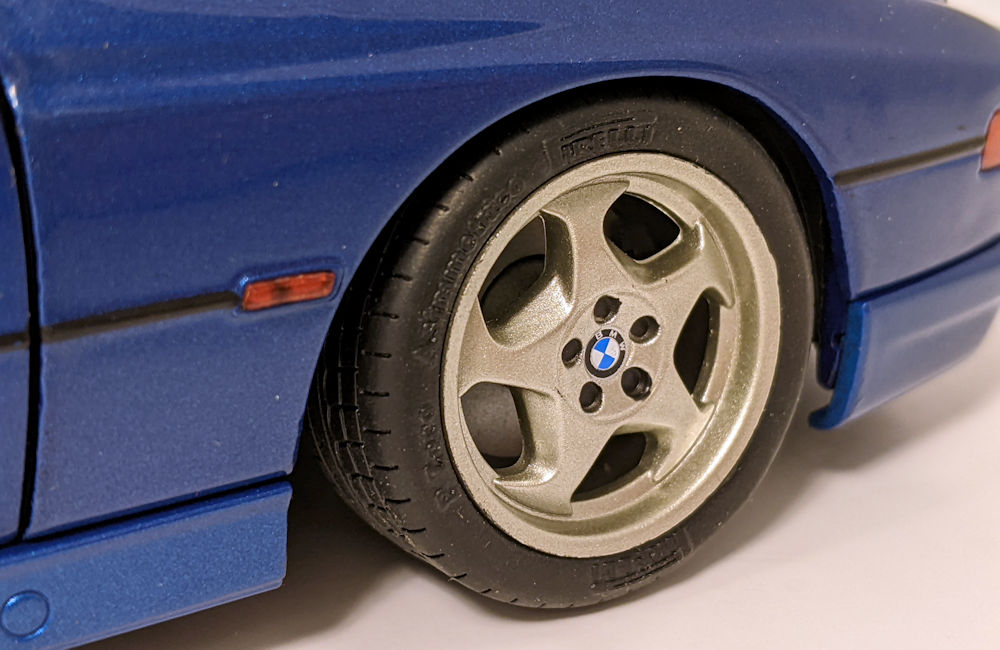 Moving onto the rims and tires, the rim design is accurate with black bolts and the BMW logo present, silver rotors and black calipers are visible. The tires are labelled Pirelli P-Zero. Overall, I think everything looks fine, although it would be nice to have valve stems present. This being a budget model, I am ok to live without them. 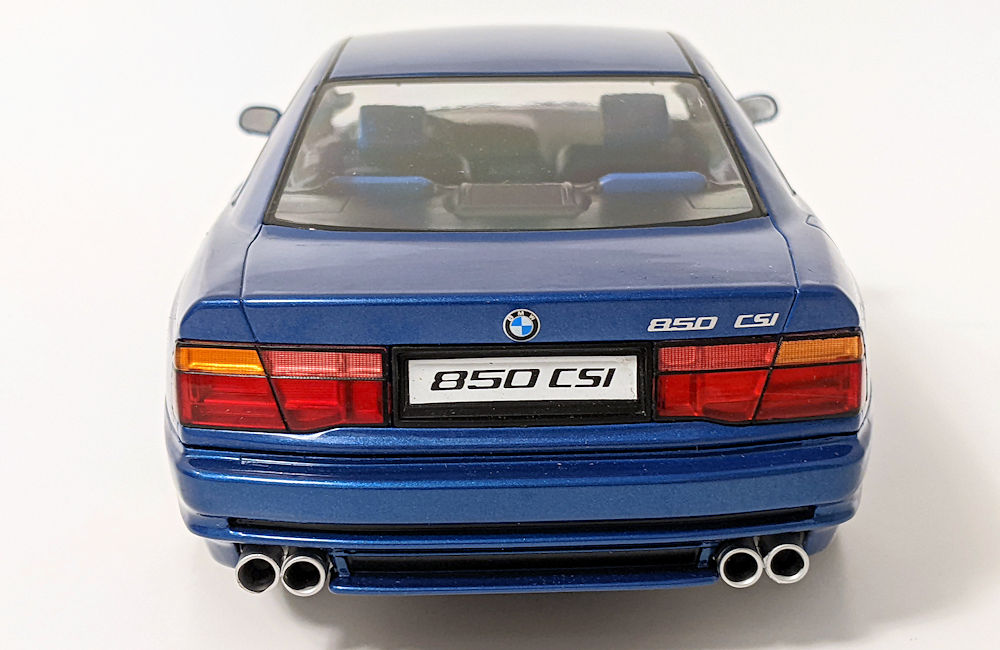 The back of the model looks just as good as the front. Everything is tidy including the rear lights, although the orange turning signal on the real car was not as orange as it is on the model – it was more of orange-red. Exhaust pipes have depth, with the inside painted black which is a nice touch. I do however feel they are slightly larger compared to the real one. 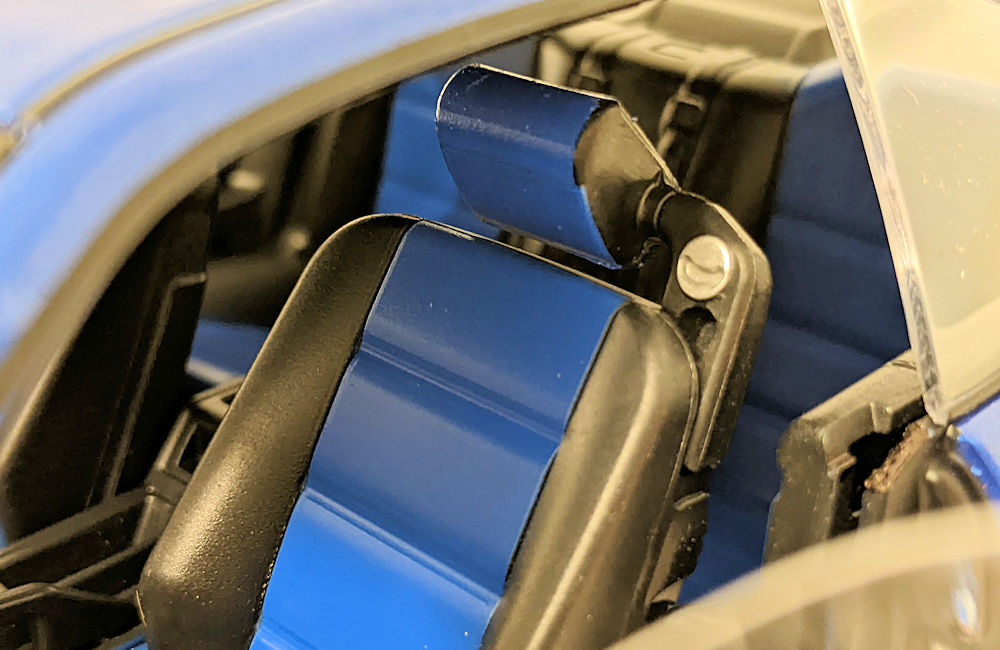 Inside, the execution of black and blue is accurate. Blue floor, blue inserts on the doors, and black with the blue front and back seats make it a home sweet home. The contrasting colours work together very well. The centre console greets us with multiple buttons which are highlighted in white, a reminder of the button happy 1990s. Power seat buttons have white position arrows present too – this is a welcomed addition to the overall interior look. 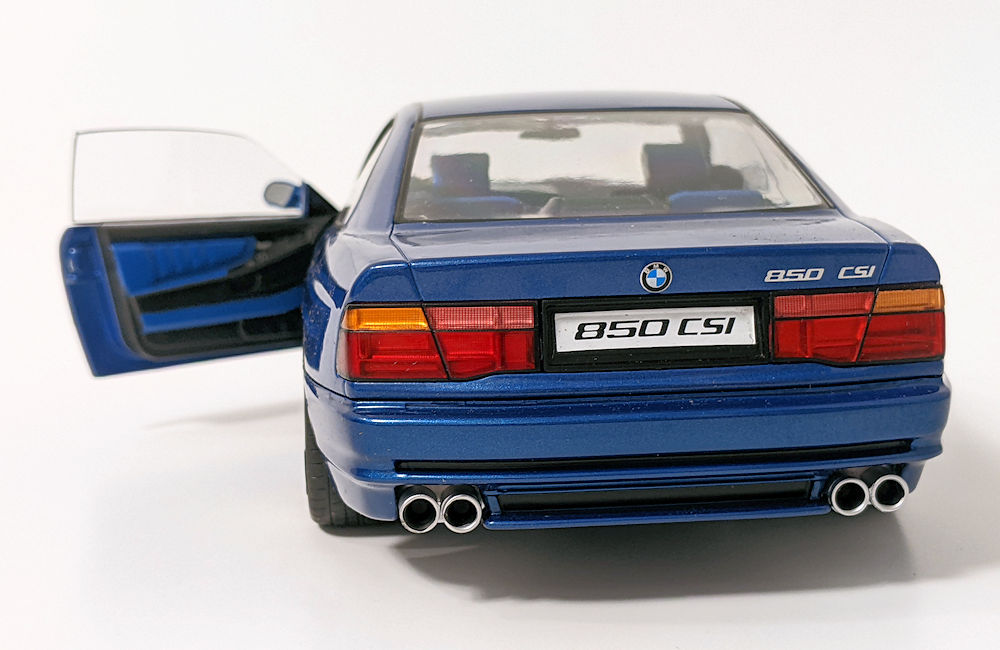 To sum things up, this Solido 1/18th BMW 850 CSi budget model is well done. I really like the blue exterior and two-tone interior. The pop-up lights are a huge bonus, not common at all on other budget models (even more premium models) and I think Solido excelled here. The model displays so well with them in the open position – it is a reminder of the cool 90s exotic feature which is now nonexistent. I think this is another win from Solido, and I highly recommend it. Happy collecting everyone!