Adding to their classic Americana muscle assortment the team at ACME will introducing a Dodge HEMI Dart – Max Hurley’s Dodge.  This Dodge replica is crafted in 1:18 and features diecast metal exterior with access to the motor and internal bits.  That HEMI is looking mighty fine and mighty large!  If you want one, the release date is scheduled for December 2018.  Suggested retail $129.95US.

About the Dodge HEMI Dart…  “On February 20, 1968 Chrysler issued a memo informing its dealers that Plymouth Cudas and Dodge Darts would be made available with a 428 Hemi engine “for use in supervised acceleration trials” – i.e. drag racing. You have to love the passion and ingenuity that the US car manufacturers had during those muscle car wars of the era. Dodge would go on to build eighty of these purpose-built Darts with thirteen of them, including Hurley’s Dart, being sold through Mr. Norm’s Grand-Spaulding Dodge.” 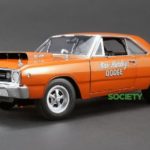 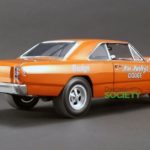 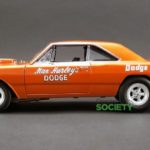 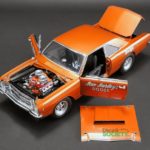 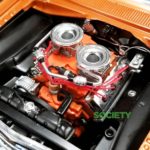 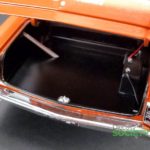 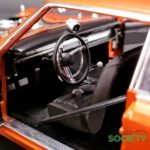