News from AutoCult this month reveals some interesting new additions.  For one, the feature highlights the 1:43 REO Truck mit Curtiss Aerocar from 1934.  This one should be on shelves by mid to late May.  Other new models include the Tatra 603A Prototype, 1961 and Ginetta G15, 1970.  Enjoy!

About the REO Truck mit Curtiss Aerocar…  “For most people and for aviation historians, the name Glenn H. Curtiss is linked to the early days of motorized flights. Only a very few know that his innovations and ideas also gave direction to the development of road vehicles.  In the 1920s he attracted attention with the realization of a comfortable camping trailer. As his customers were mostly well-heeled US-citizens, the interior design of the trailer was usually very luxurious. In order to improve the level of drive comfort, Curtiss modified several technical aspects of his camping trailer step-by-step beginning in 1927. The special trailer became known under the term “Aerocar”. The special truck/ trailer combination consisting of the “Aerocar” camping trailer and the specially built, streamlined REO truck was built at the request of the then over 50-year old Dr. Hubert Eaton in 1937. His wealth based on the idea and operation of the Forest Lawn Memorial-Park in Los Angeles, a famous cemetery that was arranged as a park afterwards where many renowned Hollywood stars found their last resting place.” 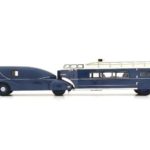 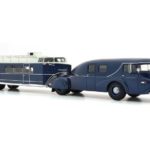 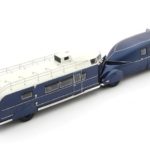 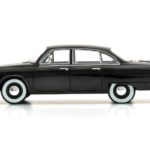 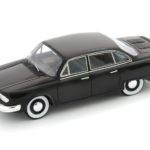 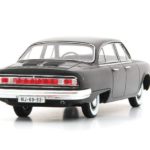 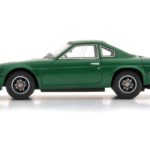 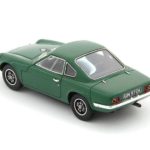 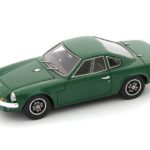 1 Response to "AutoCult New May Releases"