Fans of the Ferrari marque may like this new announcement from Looksmart, the Ferrari Dino 206 Competizione Prototipo is going to be replicated in 1:18 scale and they will offer two colors, Yellow and Red (even though there was only one prototype ever made).  Both will be made available later this year.

About the Ferrari Dino 206 Competizione Prototipo…  “Ferrari Dino 206 Competizione Prototipo was a real fully functions prototype built in 1967. Its V6 engine was based on a bigger V12 with a small change in cylinders angle (from 60° to 65°). The body shape was designed by Pininfarina Design and was completely hammered in aluminium. It was presented at Frankfurt Auto Showand was immediately named as “the most beautiful object ever created by a man”. 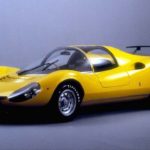