If there was ever a time when one car could be considered the sexiest ever made, the Alfa Romeo 33 Stradale would be one of them.  Released by Afla Romeo in 1967 at the Sports Car Show at Monza, Italy, this rear mid-engine sports car is nothing short of spectacular! I’ll be honest with you, I don’t collect many classic cars.  I didn’t even know this masterpiece was even made until AUTOart introduced the Alfa Romeo 33 Stradale Prototype as a future release.  I’m definitely no authority on Alfa Romeo or the 33 Stradale for that matter, but examining photos I can say AUTOart did a pretty fine job. 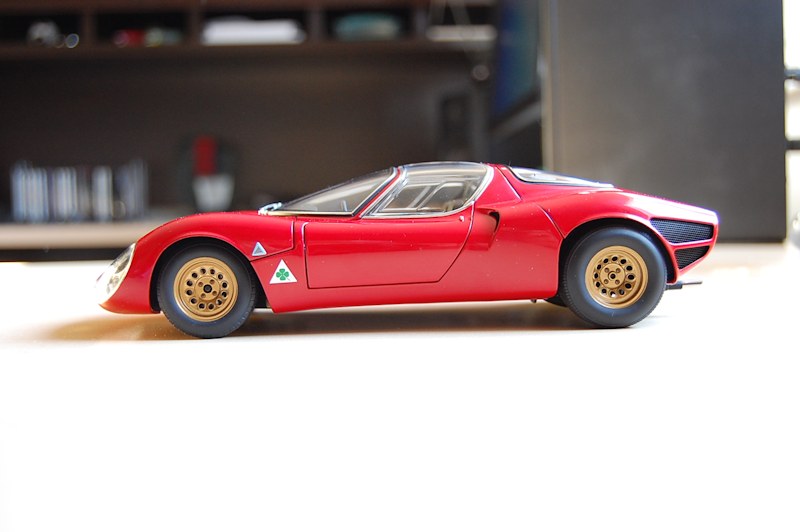 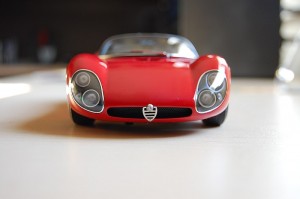 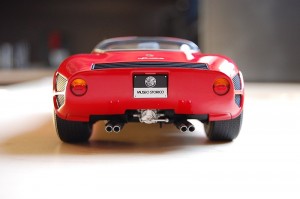 Considered a Millennium Series by AUTOart, the model is packaged in the typical four window box with a plastic internal frame.  At first glance, my thoughts were geez this Alfa is small.  What can you say about the car that probably hasn’t been saying before, no matter what angle you look at it from it looks gorgeous.  AUTOart did a great job capturing the lines of the 33 Stradale.  The paint is fresh and smooth – no orange peel anywhere on the model.  Panel gaps are minimal and based on the complexity of the doors and curved glass, AUTOart did a terrific job.  Shutlines are excellent throughout – even after multiple executions of opening the various bits on the car.  The front end features the two-beam headlights and 3D emblem.  But the rear/ass on the Alfa Romeo 33 Stradale is to die for, just beautiful! 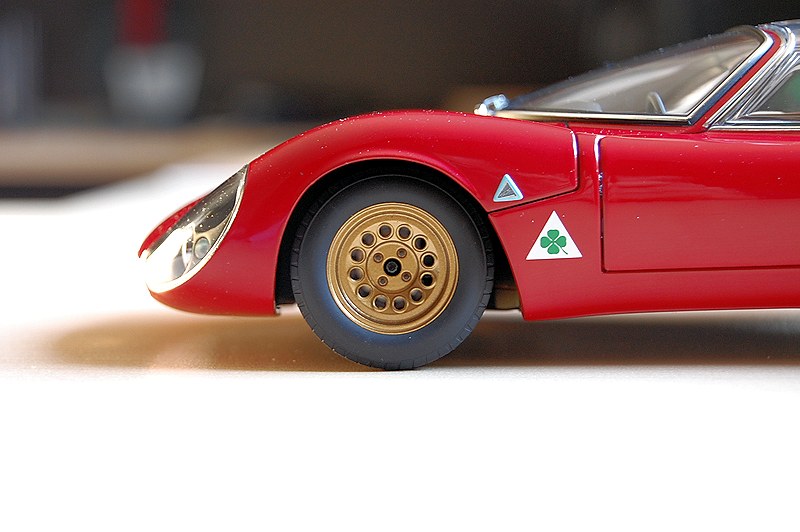 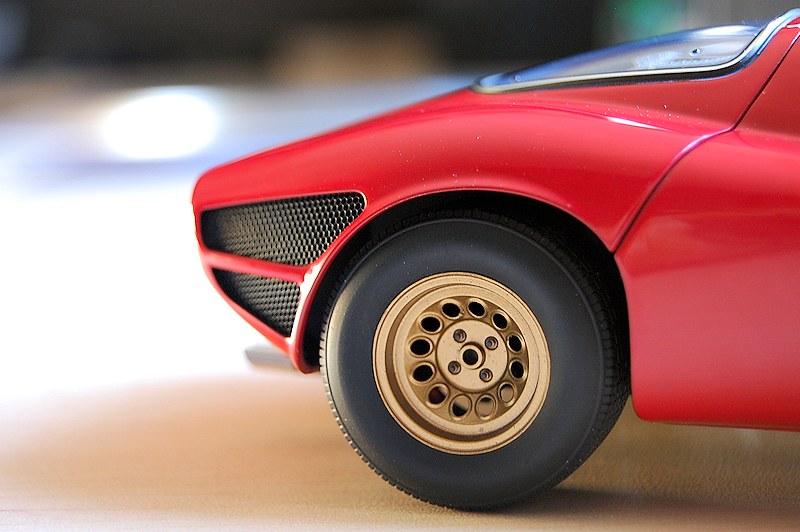 Wheels and tires aren’t too complex compared to other AUTOart releases.  Tire and rim size mimic the 1:1 nicely and both pieces are executed with quality.  Overall ride height seems to be in line with the original car as well. 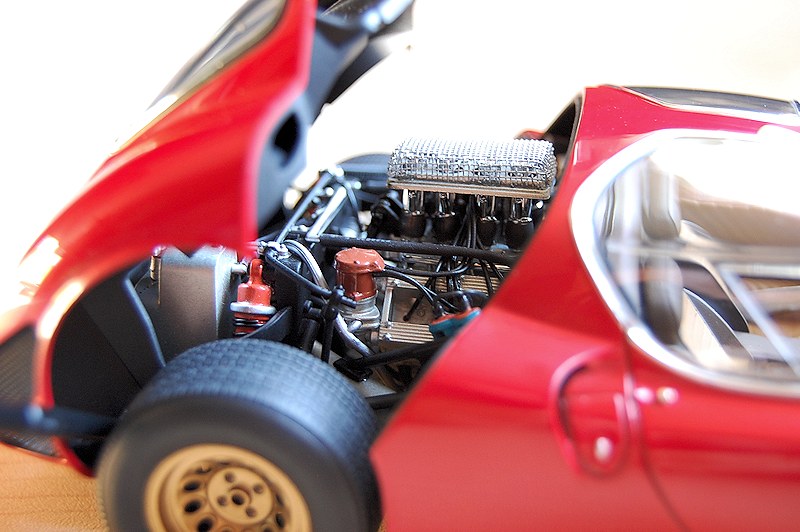 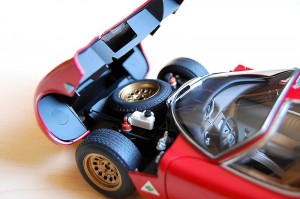 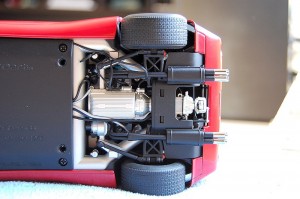 This is a mid-engine sports car and let me tell you, AUTOart doesn’t disappoint with the details here!  The various elements that make up the engine and surrounding area are all here and captured in high detail.  Motor, suspension and exhaust system are top-notch.  The bonus is the details continued to the undercarriage where the model shows off the brilliant exhaust, oil lines, and various suspension components.  Just check out the metal protective cover for the eight-barrow intakes, wow!  The front compartment houses the spare and various suspension and braking components, again all highly detailed.  Well done AUTOart! 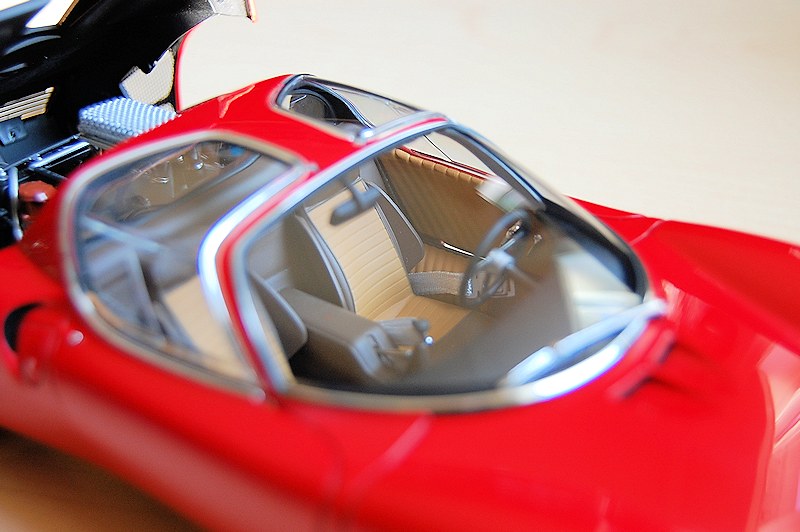 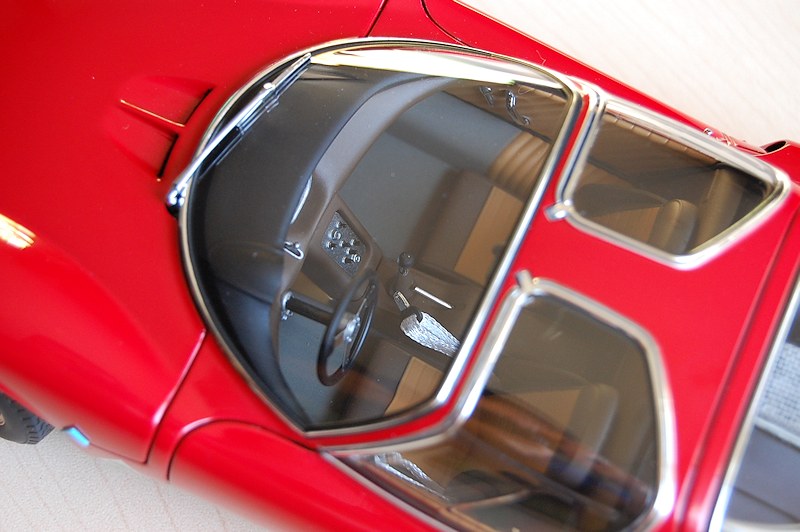 Interior is sparse for the most part, featuring a two-tone interior in beige and brown theme.  Now I’m not sure if this is a function of the 33 Stradale Prototype, but there may be some carpeting that was excluded.  Doors function without issue but based on the scale of hinge work I would consider them fragile.  Word of caution to new owners, read the instructions provided by AUTOart to prevent any damage.  One question, the seatbelt looks a little out of scale, is this correct to the period? 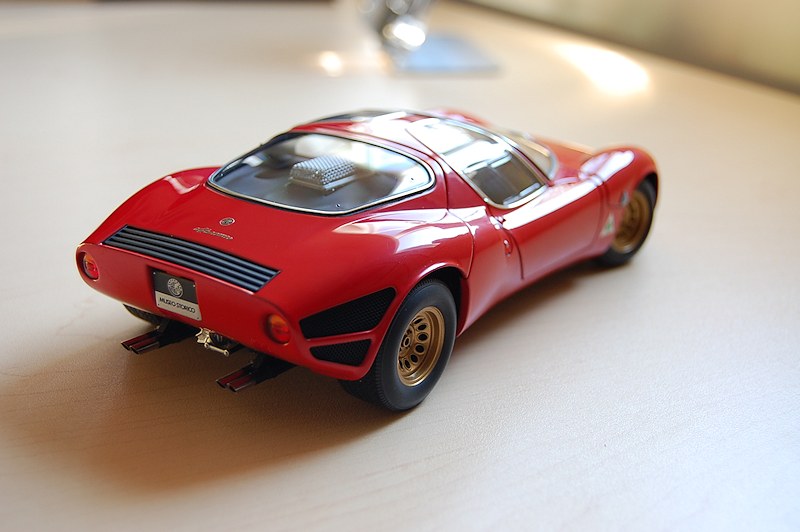 Get it!  That’s all I have to say.  The Alfa Romeo 33 Stradale is a showpiece, and one that will without doubt increase in value over the years.  The execution and detailing for the most part is without compromise.   The Alfa Romeo 33 Stradale is considered a Millennium series model, but I can tell you it one-ups some of AUTOart’s Signature models.  Don’t hesitate as they won’t be available for long.  Enjoy the pics! 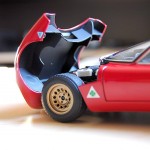 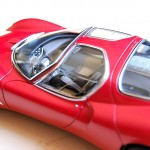 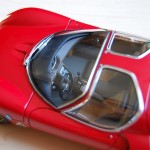 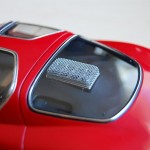 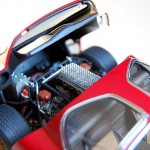 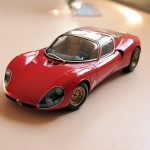 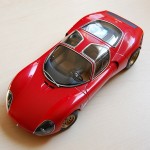 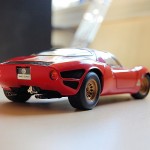 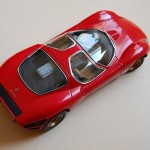 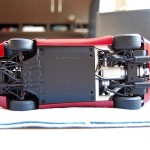 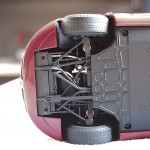