The first words of the real car’s launch brochure inform us that “DB11 is the Aston Martin you’ve been waiting for”. True, AUTOart gives collectors the first 360-degree-access model after the usual initial sealed resin flood has subsided. And the first of the colour options is precisely the launch “designer specification” in that the DB11 has been presented to the press. AUTOart’s model nearly ticks all of the “Shanghai Fashionista” specification boxes, “capturing a spirit of youthful flamboyance” and making a “vibrant statement […] inspired by high fashion” (the brochure’s marketing poetry tells us). 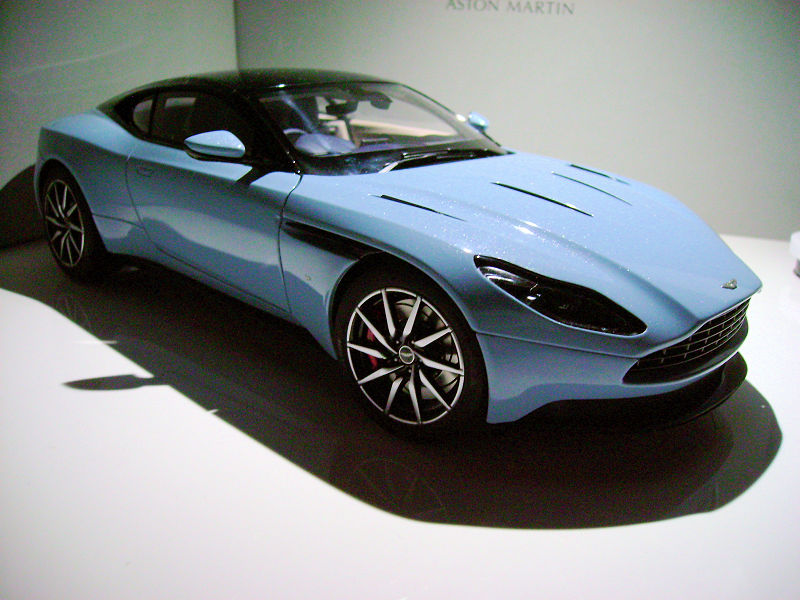 AUTOart nicely replicate the Frosted Glass Blue paint with tiny metallic flakes that give us the little classy glassy frost bite sparkle, the Gloss Black roof strake, the Dark Exterior Finisher Pack elements, e.g. black exhaust tips, Dark bonnet blades with Black (real!) meshes, and extremely nice 20″ 10-spoke directional Gloss Black and Diamond Turned wheels with red brake calipers. In fact, those rims are the best I have ever seen on an AUTOart Aston Martin. They are two-tone black and silver with Aston Martin badges at their centre, behind which you find brake discs with a barrelled carving design (inadvertently?) reminding us of the recurring opening scenes of a James Bond movie. After the Chiron, the AMG GT R and the Shelby Mustang all bore a “Michelin” branding, DB11’s tires appropriately wear the “Bridgestone Potenza” branding. 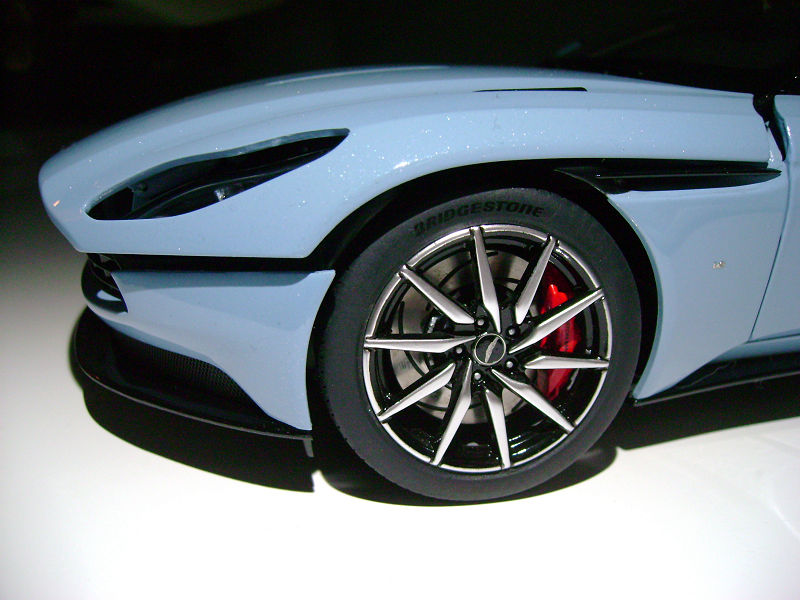 The whole stance and shape of the car is spot on, with its extremely wide, almost wrap-around-the-corners “iconic radiator grille [that] has been reinterpreted, its lines and features amplified and celebrated”, “triumphant new elements, such as the dramatic roof strake, [which] underline DB11’s confidence and originality“, and “the new side strakes, key to DB11’s pioneering aerodynamics, [which] bring harmony of form and function”, come in the Dark Exterior Finisher Pack’s black and make the model just as much of “an immaculate work of automotive art“ as the original car. In other words: AUTOart!

The LED tail and head-lights, the latter with precisely replicated LED crystal lenses, are executed nicely. They have not even forgotten to place the tiny photo-etched optional V12 badges on the clamshell’s sides, let alone the fine Aston Martin wings front and rear, and the two sensors in the grille. You almost, but vainly expect to find the bubbly structure on the underside of the side strakes that serves aerodynamic purposes as part of Aston’s “Curlicue” patent on the real car so much. 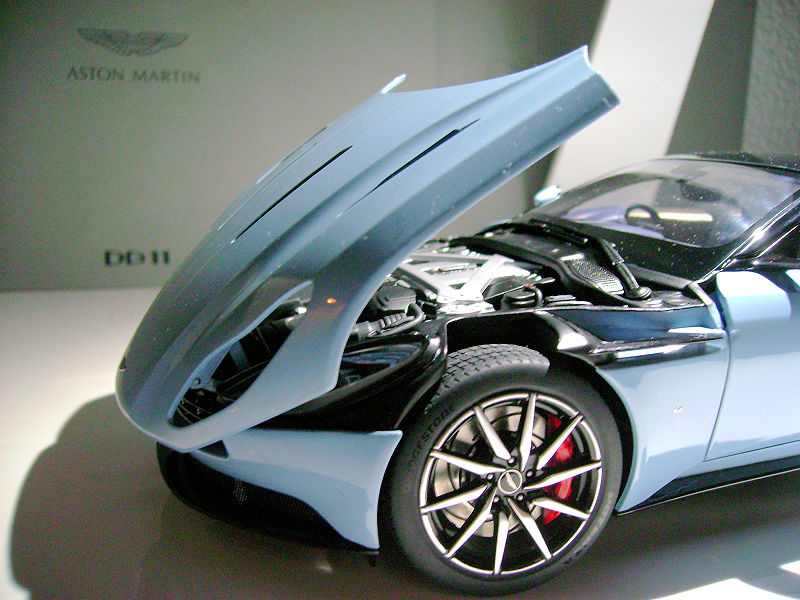 Equally, the only evidence you find of Aston Martin’s “Aeroblade” patent, is hardly the “intakes positioned in the base of the C-pillars draw air flow within the bodywork before venting it from slots in the rear boot lid.  Acting like a conventional spoiler”, but the slots in the boot lid and, with the boot lid open, the air ducts behind the C-pillars. However, don’t expect to be able and see light at the other end through them like on the real car. 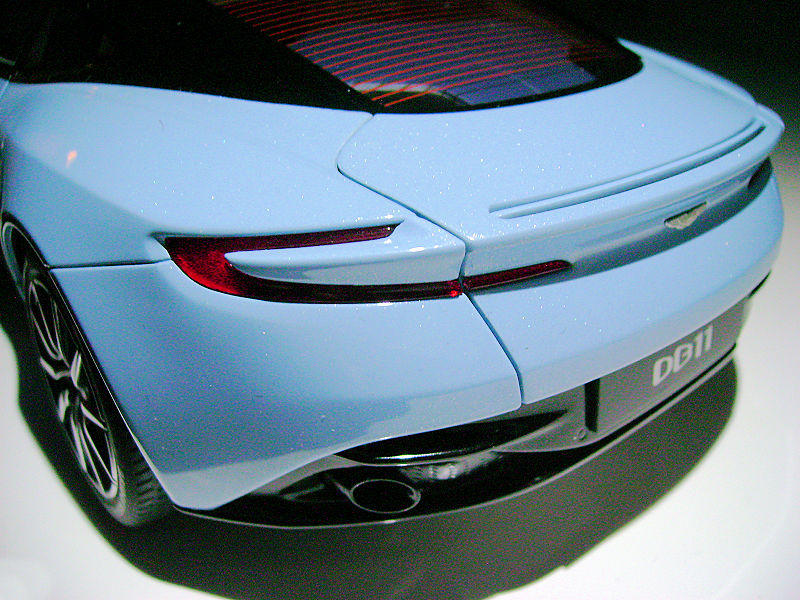 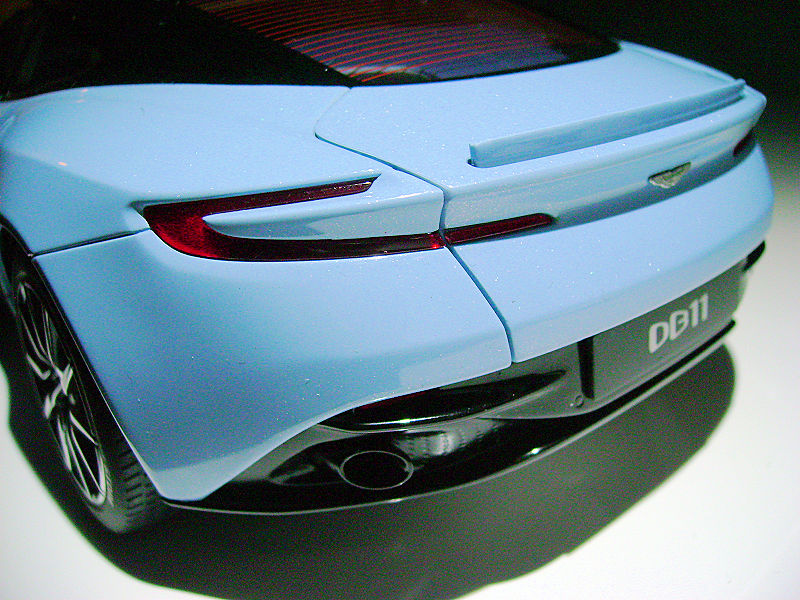 What does come as a pleasant surprise, though, is another “hidden secret” of DB11’s aerodynamics: “When more stability is needed, a small active spoiler automatically deploys from the boot lid to increase the effectiveness of the Aston Martin Aeroblade.” “Small”, yes, “active”, you wish. You’ll have to push the “lock” unseemly projecting from the boot’s inside into the lid to deploy the spoiler blade manually… and very, very cautiously. The delicately flimsy composite boot lid will need to be kept in position by applying the same counter-pressure that is needed to deploy the spoiler… or you’ll inadvertently break the hinges and the entire lid off. Phew, nerve-wracking experience!  “When no longer required it retracts [on the model: must be manually pushed] back into the boot lid to preserve DB11’s uncluttered lines“.  Honestly, the functional spoiler may be a nice-to-have feature and may have only become possible through AUTOart’s composite design, but by the same design it becomes much too dangerous for my taste, especially as on a model it only does what the name suggests: “spoil” the “uncluttered lines”. 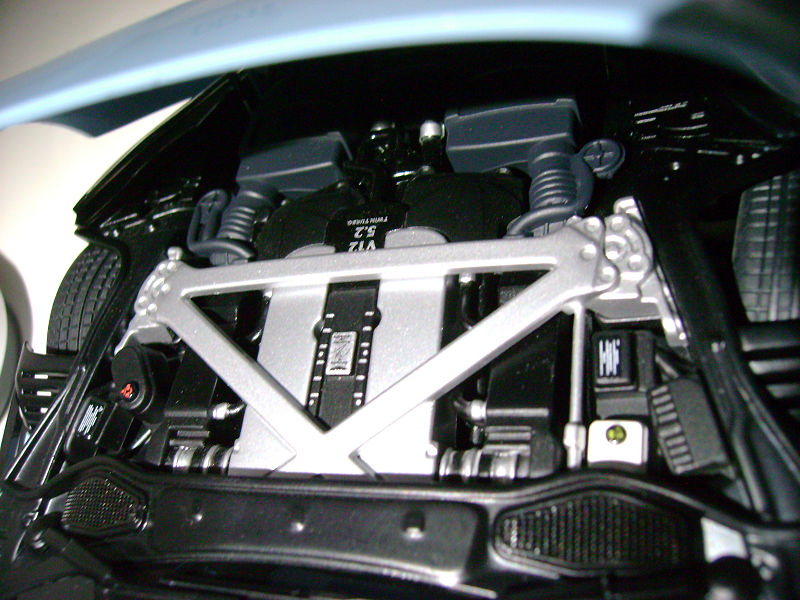 Similarly dangerous but more rewarding is opening the other, the business end. “The clamshell provides delightful theatre, hinging forwards to reveal a spectacular panoramic view of the magnificent V12 engine beneath.” That I have nothing more to add to the brochure’s words other than pictures to prove the point is probably the biggest compliment to AUTOart. 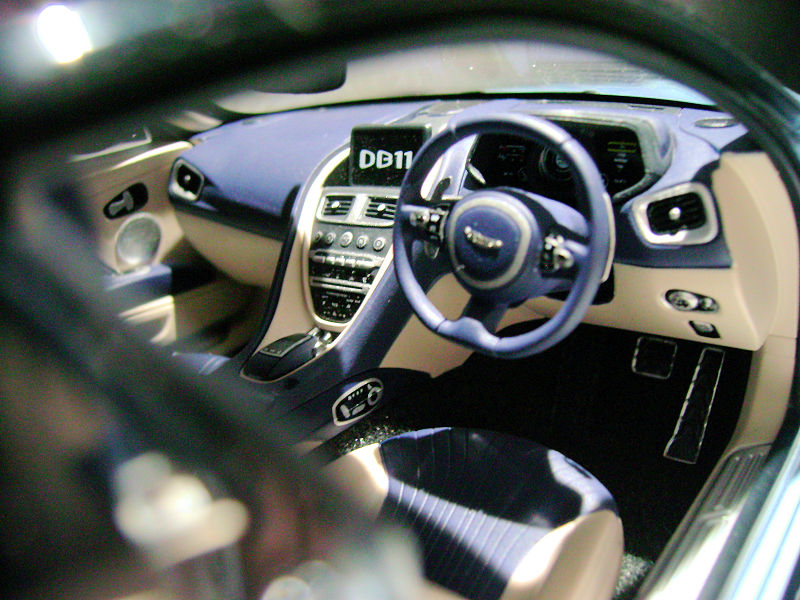 The interior is 99%  “Shanghai Fashionista” spec, too. Shut lines on doors are so tight that gaining access requires some cautious effort with a fine opening tool and feels as legitimate as committing car burglary. Inside AUTOart gives us the Caspian Blue carpet and the Ivory and Aurora Blue leather, even in the absence of Brogue detailing with Vivid Red inlay and I can’t see High Gloss Chopped Carbon trim inlays or the Satin Silver Jewellery Pack either, but the Interior Black Pack is there. Irrespective of the exterior’s colour option, this two-tone interior is a very tasteful design and most easily the best of AUTOart’s variants of the DB11. Fabric seat belts? Check! What I like even more, is the attention to detail given to the interior by AUTOart. Just look at the buttons, gauges, air-vents… and compare the cabin to AUTOart’s own V12 Vanquish whose interior is even surpassed by Welly’s DB9.  AUTOart has vastly improved here. Having said that, the print-on seat controls on the centre tunnel remain a sad exception and chilly reminder of the composite’s teething problems seen on the Vanquish, though.

In conclusion, AUTOart’s “DB11 is the Aston Martin you’ve been waiting for”. This is a very good 360-degree-access model, improvement over past composites with room for development towards excellence, just fairly priced when compared to the sealed resin alternatives. If I were AUTOart, I’d keep this room for improvement to be able and sell at affordable prices when making future models. Whether this or one of the other colour combinations offered by AUTOart is what you were waiting for, of course, remains a very personal question of preference that is not subject to a review seeking to make fair judgements on accuracy and quality.