I’ve been a fan of the Chevrolet Corvette for as long as I can remember.  Memories of riding in my cousin’s ’79 C3 Stingray as a young lad are still as vivid as they were on that day.  When AUTOart announced the 1:18 Corvette C7 Z06, you knew I’d be excited, there would be no doubt the model would be added to my collection.  My current Corvette collection stands at fourteen, twelve of which hold the AUTOart name.  You can read some of the many reviews by clicking on the link above! 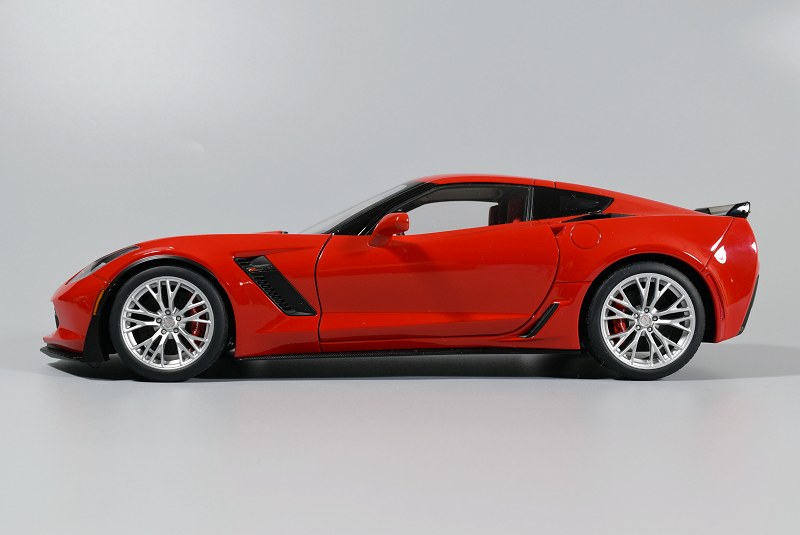 The latest Corvette C7 Z06 is from AUTOart’s Composite Series.  What does this mean? Good old diecast has been replaced with composite material. In layman terms, it’s plastic.  I decided to go with the Torch Red exterior, as I already have the C6 Z06 in Yellow, a brilliant replica from AUTOart by the way.  So let’s review this highly anticipated piece from AUTOart. 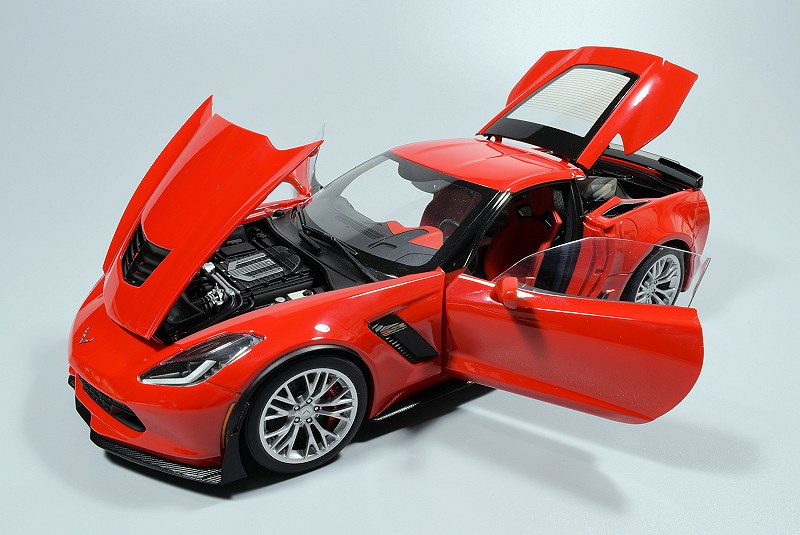 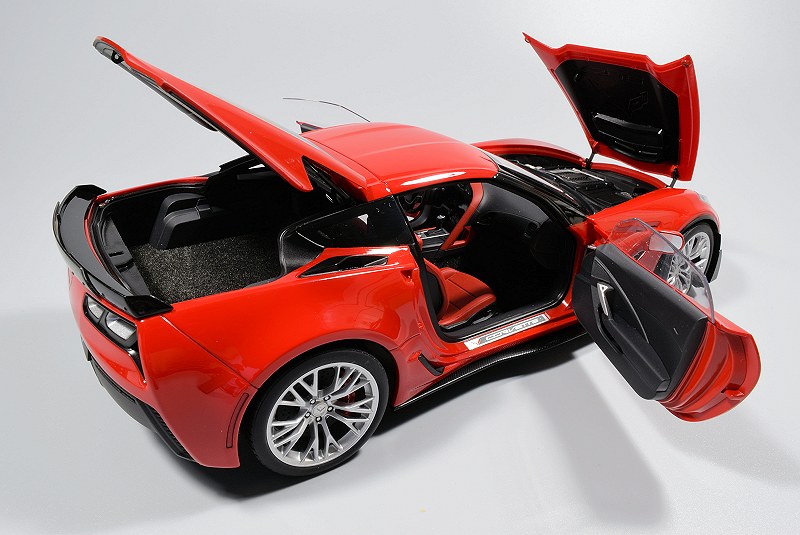 The exterior lines of the AUTOart Corvette C7 Z06 are very good.  Their attention to detail appears to capture the essence of the 1:1 very well.  The Torch Red paint is very good, much better than past composite models that have come my way.  Shut-lines and panel gaps are excellent, one of the perks of composite material. 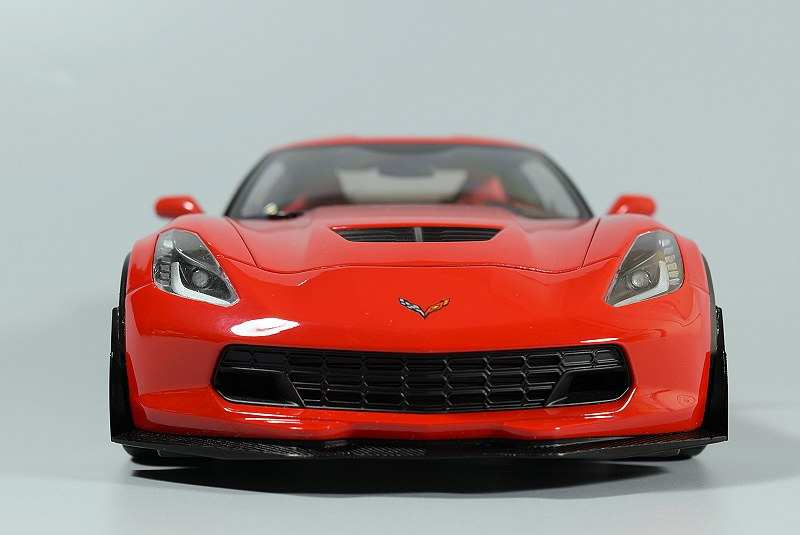 Moving to the front of the Corvette C7 Z06 we find a perforated lower grille and the one found on the hood is open as well.  The lower chin spoiler is nicely executed and fins are correct at each end.  You’ll notice the Black wheel arches are present on the model; some early pieces (Asian market) left the factory with these pieces missing.  Headlight attention is good, but the fitment into the composite material is a little rough for a model of the calibre. 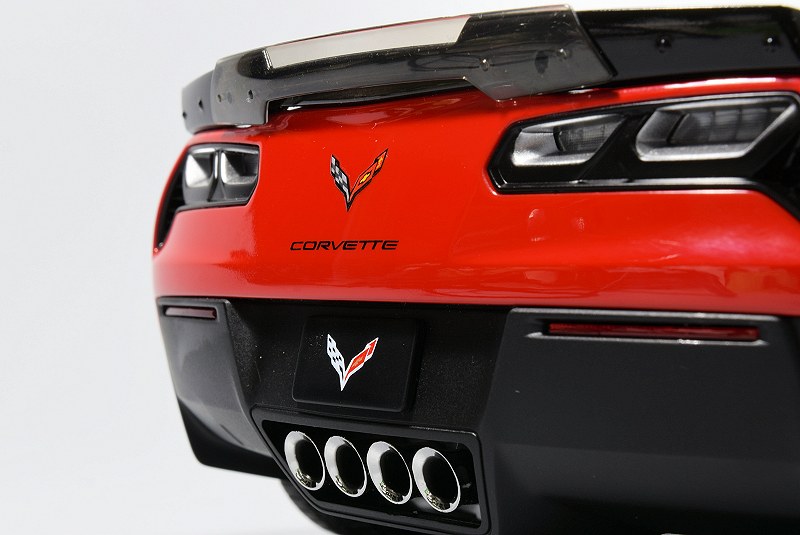 The first thing that strikes you about the rear is the quad exhaust tips.  Execution here is awesome; the chrome work is top notch, life-like!  Taillights are nicely executed too; the Black surrounds have the shiny finish, though the lower bumper/valance does not.  I’m not sure if this is an error on AUTOart’s side or an option for the C7 Z06.  Anyone confirm?  Another miss is the upper and lower grilles, which are all solid bits.  The same can be said for the upper roof line ones and the front fender, left and right side, too. 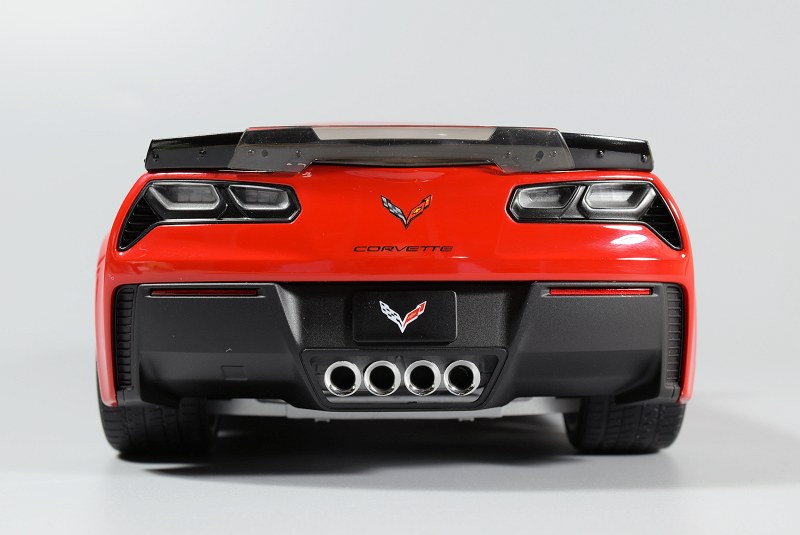 There was also some concern of the rear spoiler being wrong.  Based on images I studied that rear spoiler is available, though there were multiple other options I did come across too. 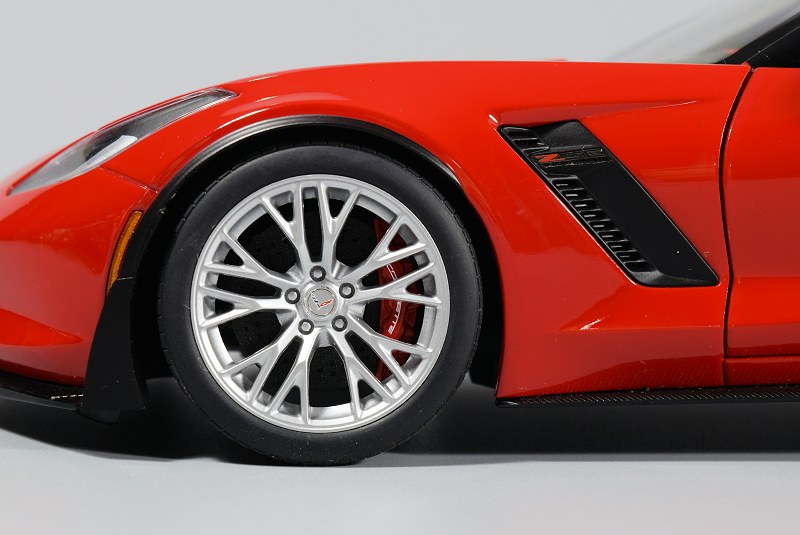 Some are complaining about the ride stance, not me.  I believe it’s perfect, probably little more generous that the OEM stance.  But when in doubt lower is always better!  Wheels and braking components are excellent, typical AUTOart.  Thank goodness they went forward with the Silver coloured wheels and left the Chrome and Black on the shelf. 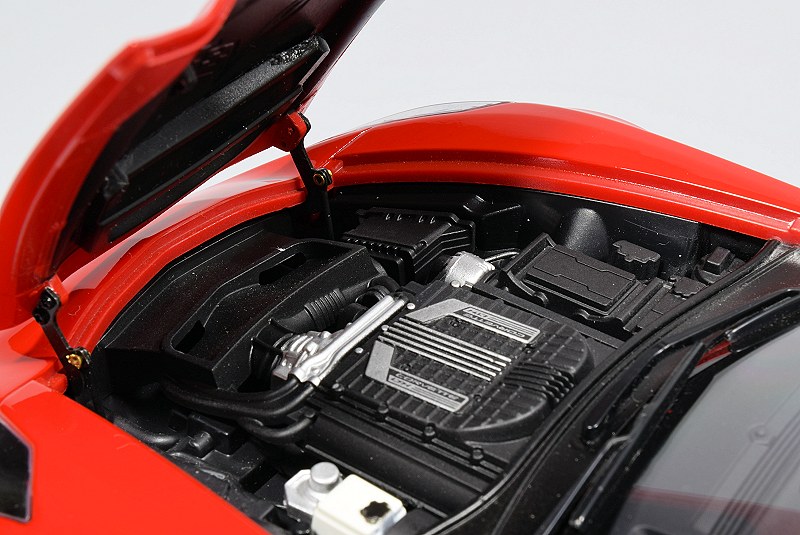 The BIG miss on the model without a doubt is the motor.  Yes I understand that modern motors don’t leave much to the imagination, but AUTOart’s execution is poor, really poor.  Some are calling it a Maisto, and they aren’t far off.  The two layer system AUTOart incorporated in the design is definitely a cost cutting measure.  At this price point it is totally unacceptable!  How someone at Chevrolet signed off the scale motor design is shameful.  I’ve read today that AUTOart is considering a revised motor for future colours and variants alike.  So how does that leave us collectors who already put down their hard earned money on the Red and Yellow?

On the flip side the nicely engineered hinges are present and Chevrolet logo amid the backside of the hood is visible too. 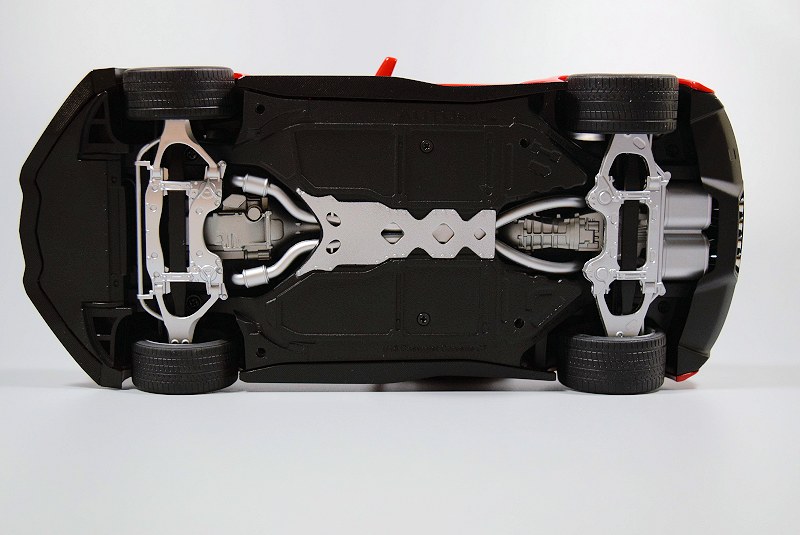 The undercarriage is surprisingly detailed, not a big surprise for collectors who already own some of the previous Corvette replicas from AUTOart, they are some of the best in the business. I’ll let the photo do the talking here. 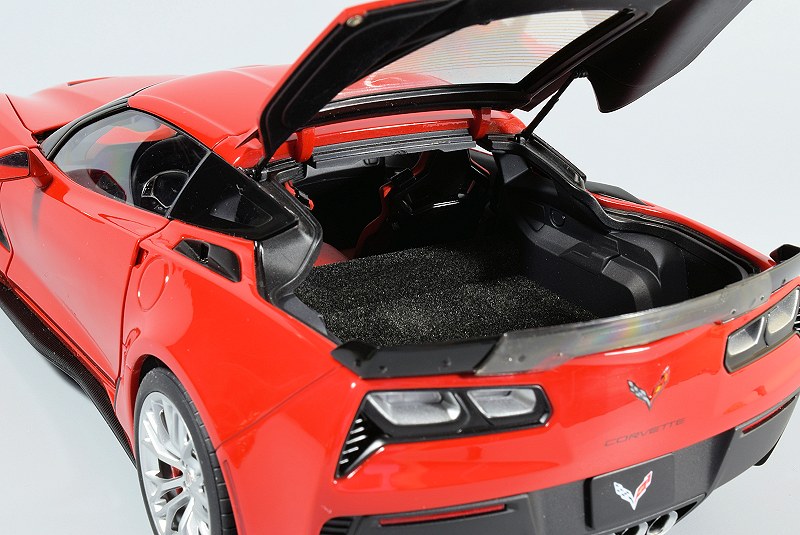 Rear storage is accessible.  There are two struts left and right holding the hatch in position and operation is flawless.  The interior side is fully carpeted too. 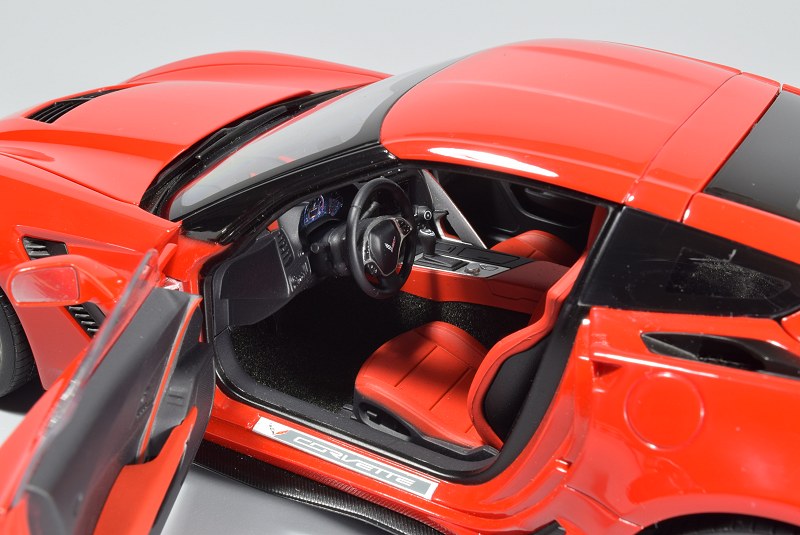 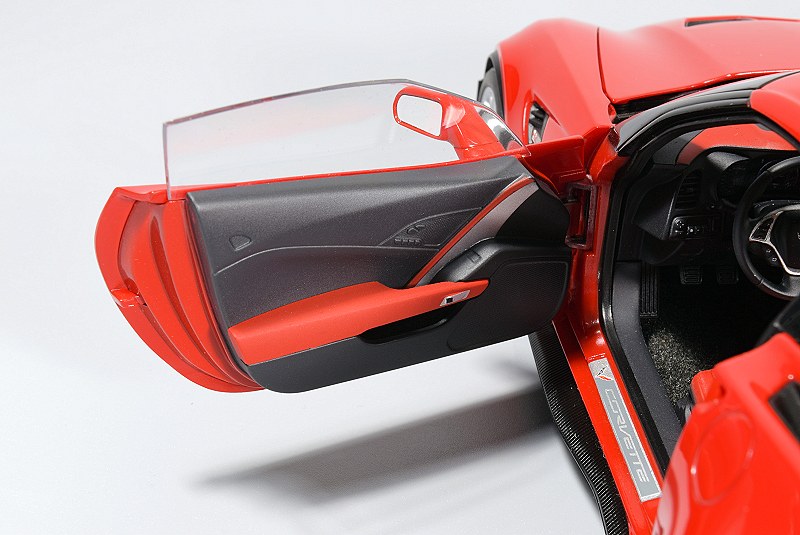 The cockpit is beautifully executed and the photos will highlight this.  Interior elements are present and all detailed with care. Fabric seat-belts are found here, along with full carpeting.   Well done AUTOart!

** UPDATE ** A DiecastSociety.com member pointed out a quality control issue with the interior.  Note the Red coloured door card on the driver side and non painted for the passenger (images below).  I’ve sent a note to the Canadian AUTOart distributor.

** UPDATE #2 ** Well it seems the model may be as accurate as received. There are multiple interior options available for the C7 it seems. Though the Canadian AUTOart distributor is finding a definitive answer. 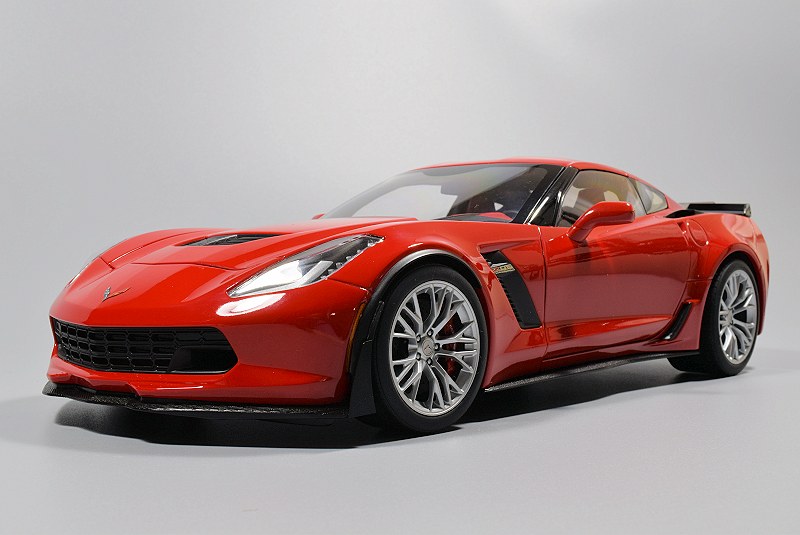 I have some mixed emotions for the AUTOart Corvette C7 Z06.  For the most part it is a very good effort.  The paint is better on this Corvette C7 Z06 than any composite pieces of the past (my opinion).  Not perfect but they are getting there.  One thing to note as well, the model is extremely light in hand, and seems somewhat fragile in nature.  Again this is due to the move to composite from diecast metal.  The huge miss is the motor, for me this is why I want models with accessible areas, so I can enjoy the internal and hidden detail that sealed models don’t afford us.  That being said, I still give her the thumbs up.  Enjoy the pics! 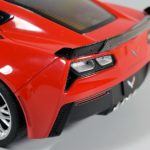 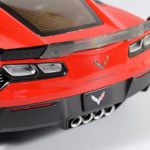 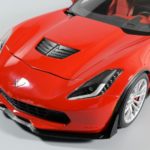 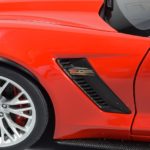 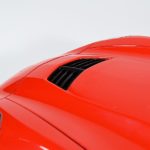 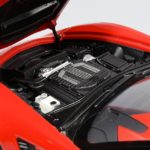 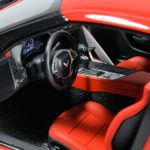 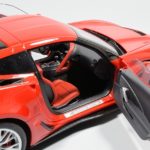 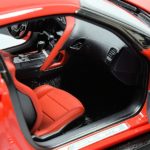 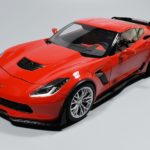 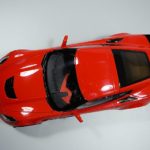 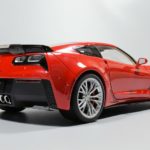 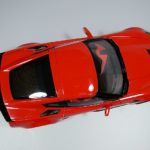 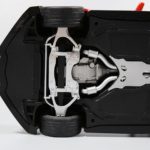 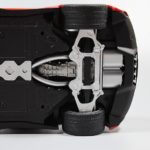