Like you, we are collectors ourselves.  Members of our team were early anticipating the arrival of the AUTOart 1:18 McLaren 675LT, specifically the Chicane Grey exterior.  The McLaren 675LT has a racing pedigree, the latest model is based on the mid-nineties race version.  Fast forward 20 odd years later, the latest rendition as McLaren defines it equals “More power, less weight, more precision”.  The styling of the 675LT is subjective, but we think it is striking and innovative.  Performance is based on V8 twin-turbocharged engine power 666bhp and torque 516lb ft. All this power drives through a seven-speed dual-clutch gearbox.  Together they excel the 675LT to 330 KPH or 205 MPH. 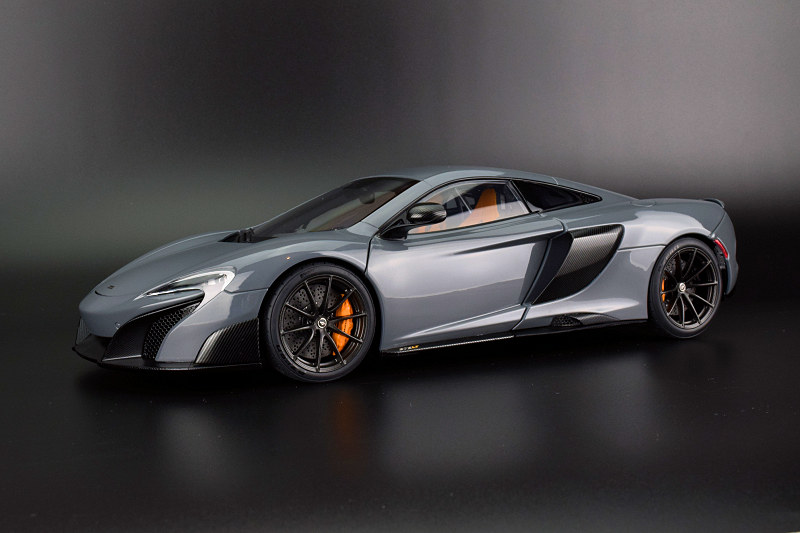 We were excited to hear the first official release of the 675LT would feature the Chicane Grey.  Question is, could AUTOart pull off the colour on their new composite panels?  The answer is yes!  The paint on our example is flawless, nice deep rich throughout.  A perfect match for the 675LT lines. 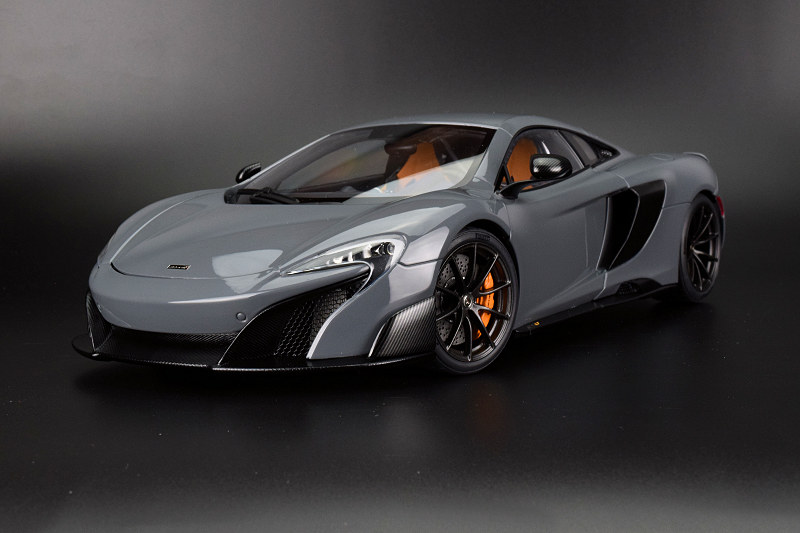 The exterior features a number of carbon fibre elements. AUTOart executed them via decals and moulded type.  Decals are used on the side vents just rear of the doors (BTW these are complete with full metal mesh in behind), mirrors and fins on the lower sides of the bumper/chin spoiler.  Front chin, sides and rear bumper all appear to the moulded.  Appear not poor overall it does not match the refinement of the original. 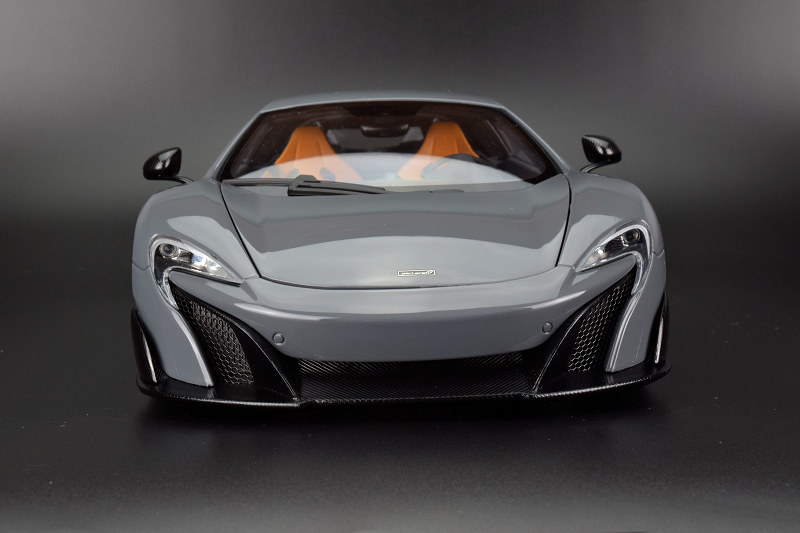 Front lower openings are completed with preformatted metal.  Headlight detail is decent, but the upper section doesn’t define the LEDs as one would like. 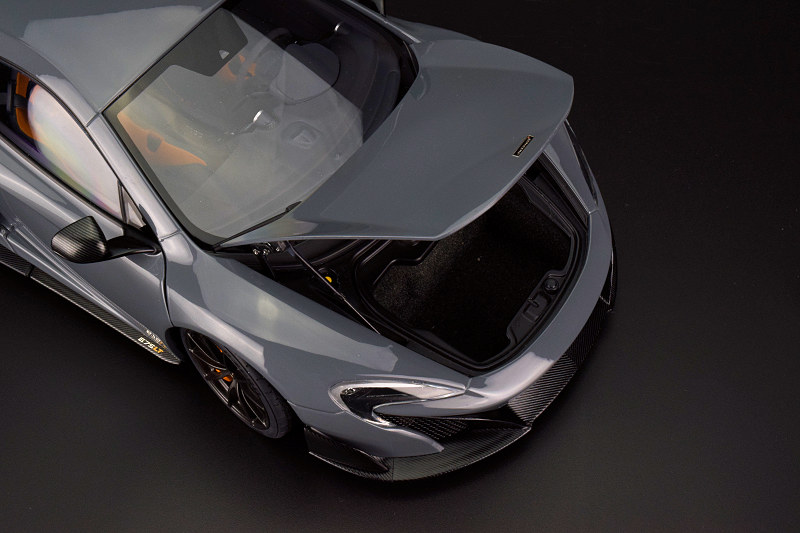 Moving upwards the model does provide access to the storage area.  Nice work with hinges and struts on either side.  The storage opening is fully carpeted too.  Shutlines here are definitely solid here. 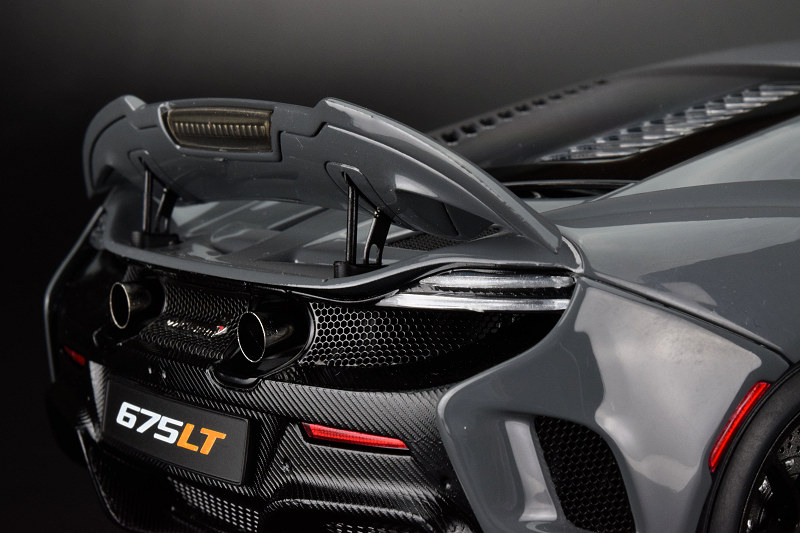 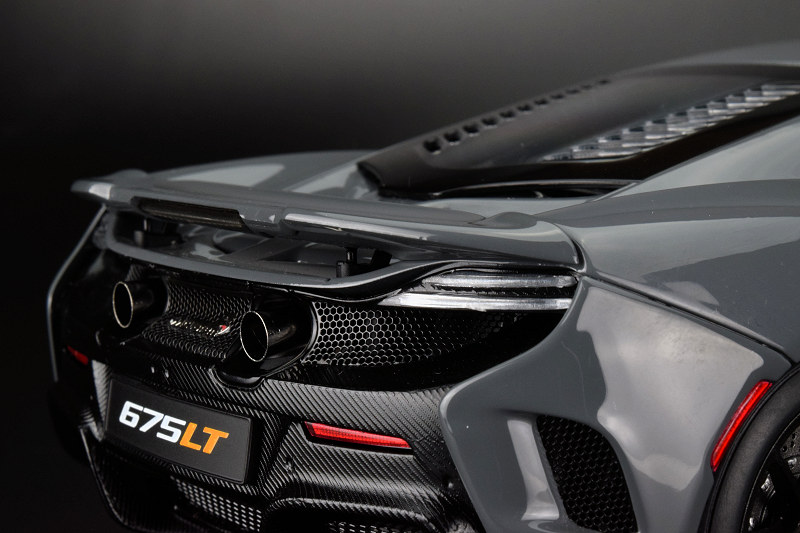 The rear has loads of details.  First off, the rear spoiler/brake is fully functional.  No issues with our example.  Dual exhaust tips look to be metal in material.  Implementing opening with the use of mesh in the upper and lower section, and opening on either side of the bumper show exceptional results.  Shine a little direct lighting and you can see the various bits in behind. 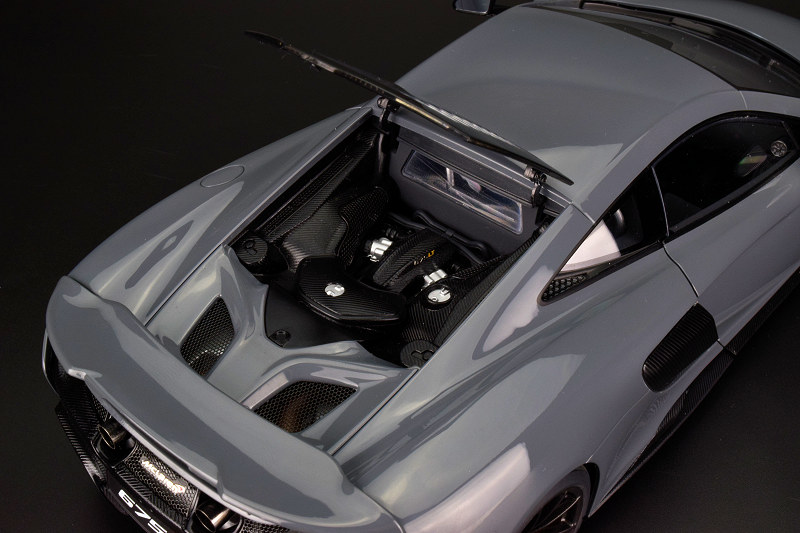 Motor here is accessible as well.  Just prior to the hatch there are two opening that provides visibility to the various exhaust components – nice detail is found in behind.  Once you lift the hatch, you’ll notice two hinges on either side but no strut support.  The hatch is meant to be kept open with a single pole that AUTOart does not provide.  Motor detail is good, nothing more nothing less. 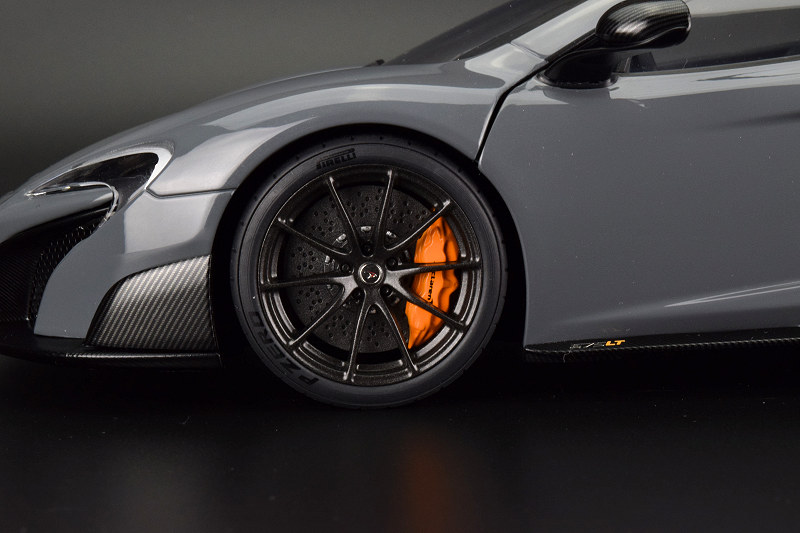 Wheels on the McLaren 675LT are the 10 spoke light alloys.  The front is 19” while the rear is fitted with 20”.  AUTOart’s example comes painted in Black/Bronze finish. In behind the massive Orange, calipers are mated to carbon fibre brake discs.  The complete package is well refined! 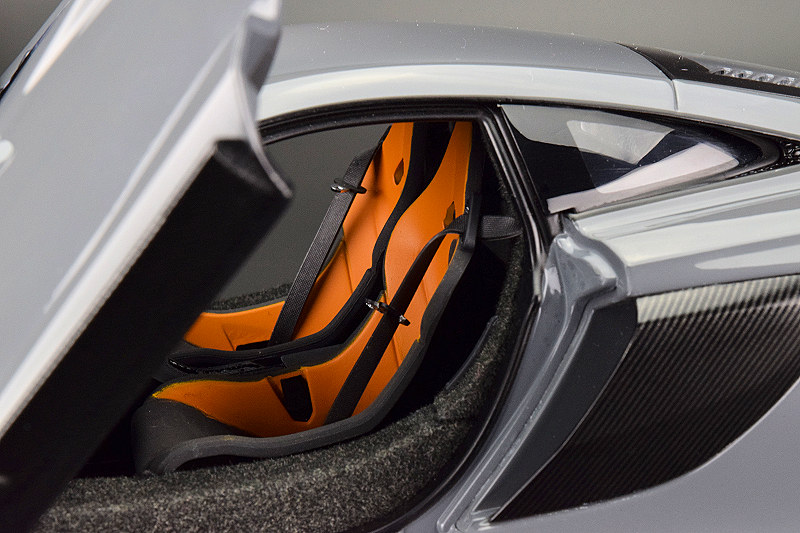 Moving to the interior the upswings doors provide full access to the 675LT interior.  Operation of each door on our example was flawless.  Shutlines are good here as well. Orange from the brake calipers is found within the seats.  We like the use of texture AUTOart used to replica the Alcantara elements in the seats, dash and steering wheel.  Caron fibre bits are found within the centre console.  Overall some of the best results we’ve seen from the team in some time.  One a negative, the dreaded rubber seat-belts once again make their appearance. 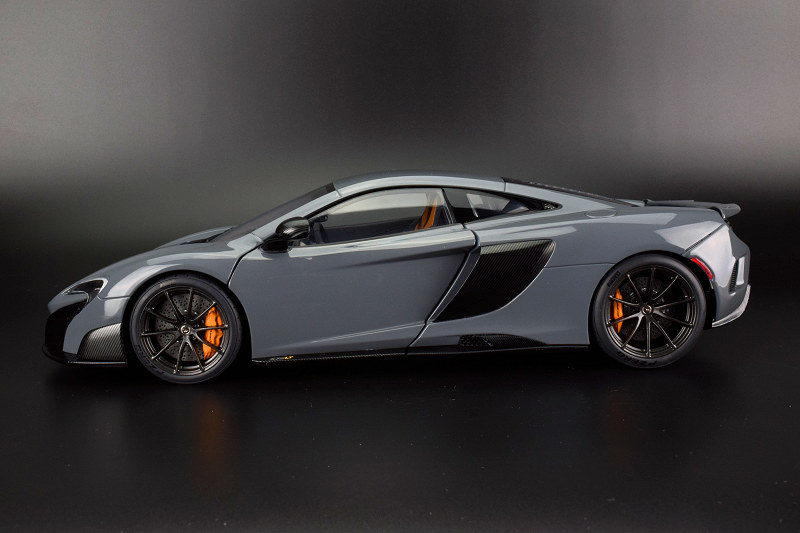 The wait for the AUTOart McLaren 675LT was well worth it.  One team member sold his sealed TOPSpeed version, he has zero regrets.  From an execution standpoint, the model checks a lot of boxes.  Some minor bits, specifically those with the moulded carbon fibre elements should be addressed.  Overall, we are very impressed with the model, we highly recommend it for all sport and supercar fans.  Enjoy the pics!