Back in August AUTOart provided fans a first look at the production 1:18 scale McLaren 720S.  Fast forward to today, we have the Glacier White with Silver wheels under the microscope for review.  Why did we choose Glacier White?  Well, out of all the available colours (there will be four in total) we thought it was the most unique one of the bunch.  Something we haven’t seen on any other model in their assortment of sport car, supercar or hypercar to date.  But as we always say, BUY what colour inspires YOU best!

The 720S is one of the latest models from the McLaren team to date.  700+ horsepower and 0-60 time in less than 3 seconds ensure its position amongst the supercars of the day.  AUTOart’s replica features a full 360 effort and is crafted in their patented composite and diecast metal experience.  For some, this is already negative.  However, there is more here than just composite material. 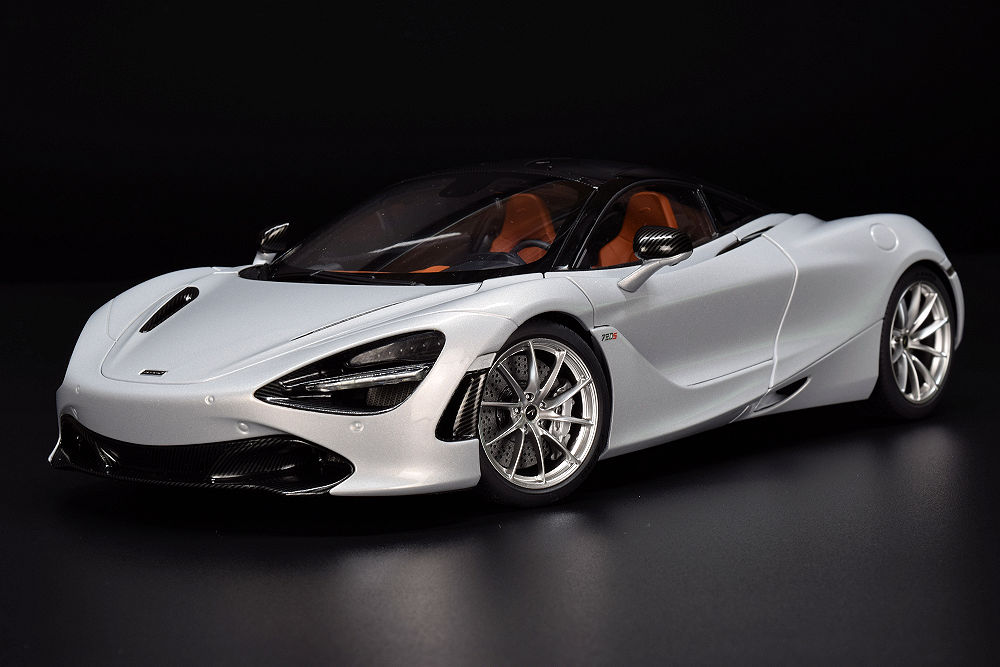 From an exterior perspective, the model receives several good marks.  The overall design with various styling curves and aerodynamic engineering all definitely part of the package; it is quite remarkable how good scale replicas really are today.  The exterior shut lines are panel gaps are excellent on this particular piece, so good in fact it was extremely difficult to open the front storage for example.  Even with several hobbyist tools in hand LOL.

We want to point out that all the cooling and air direction venting are all open and genuine, even down to the small opening on either side of the vehicle, the lower section, just behind the rear of the doors.  Very impressive for sure. 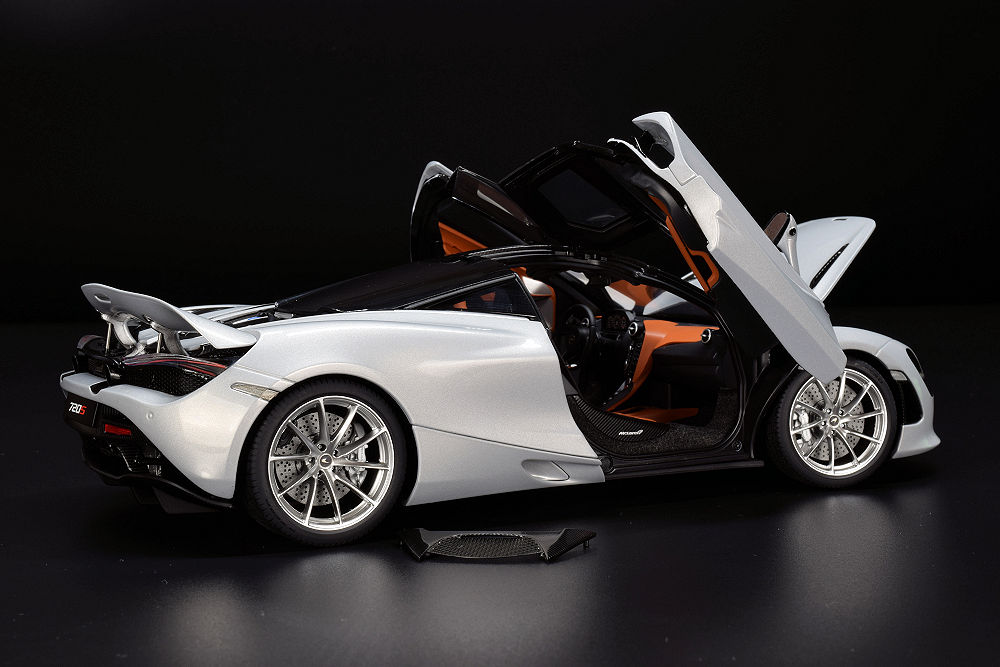 The Glacier White paint is just as good if not better in person than the initial photos posted by AUTOart.  You are constantly in debate whether it’s actually White or Silver.  Again, what we believe makes it unique and possibly a grail for a collector future tense. Another plus, AUTOart crafted all the carbon bits with tampon style, much better than the moulded plastic look that finds its way on other models. 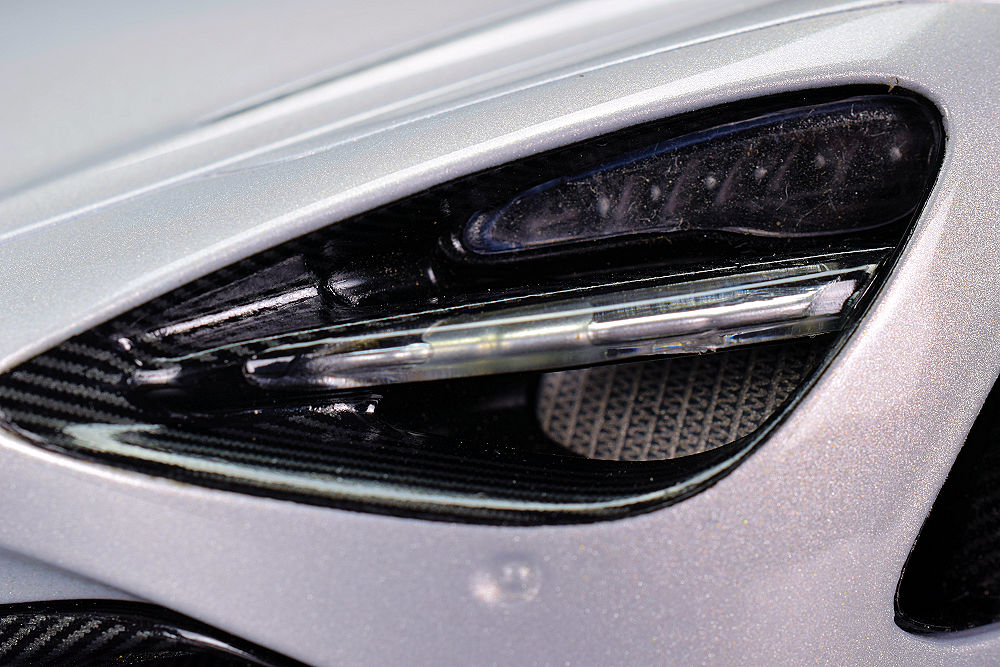 Moving to the front side, each element is handled with care, overall execution is solid here.  What impressed us most is the highly detailed section of the headlights/turn signal housing.  There is some debate from McLaren purists of the overall look, but we lean on the like side.  It is more than just visual aesthetics here, AUTOart goes deep in the overall implementation.  Admirable work with carbon fibre detailing and providing us with a fully open experience on the aerodynamic side. 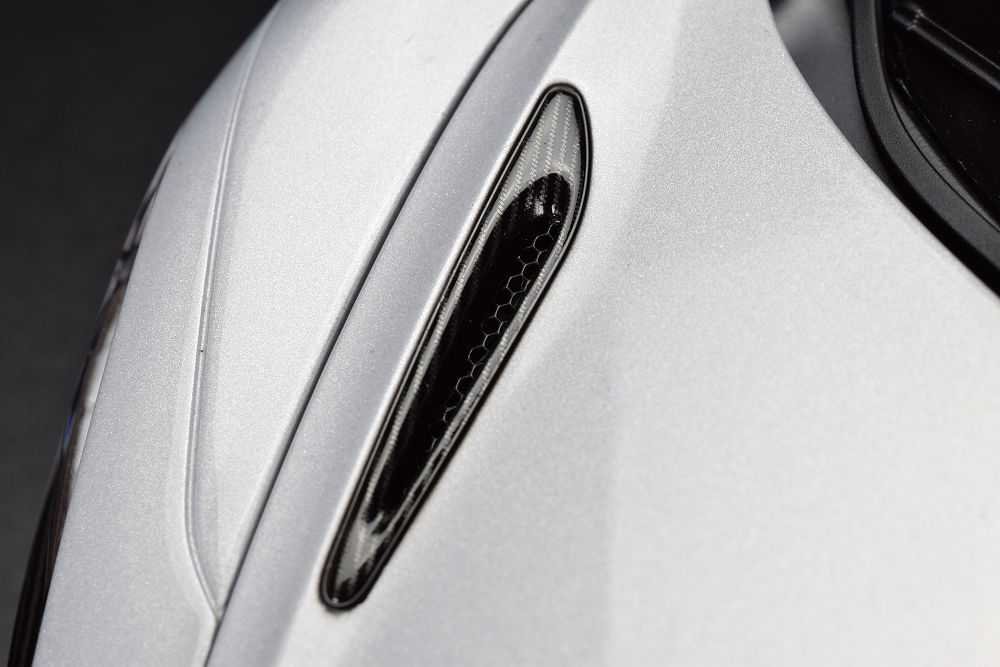 The front storage is provided and once inside quality hinges and struts are presented.  The area is also fully flocked and additional details include a fire extinguisher, first-aid kit and a warning triangle (packaged) is provided.  What is not here is the small storage mesh housing on the left side.  Now we’re definitely nit-picking.  Also, we must mention the two vents on the hood itself, carbon fibre and open grille equipped!

Jumping to the rear, the large glass is tinted in appearance.  If you look inside, you’ll notice the absence of the luggage straps.  Moving down, AUTOart does provide you access to the motor, well limited access is what it is.  There is a small removable cover that once removed provides a view to small of the internal components and fluids. 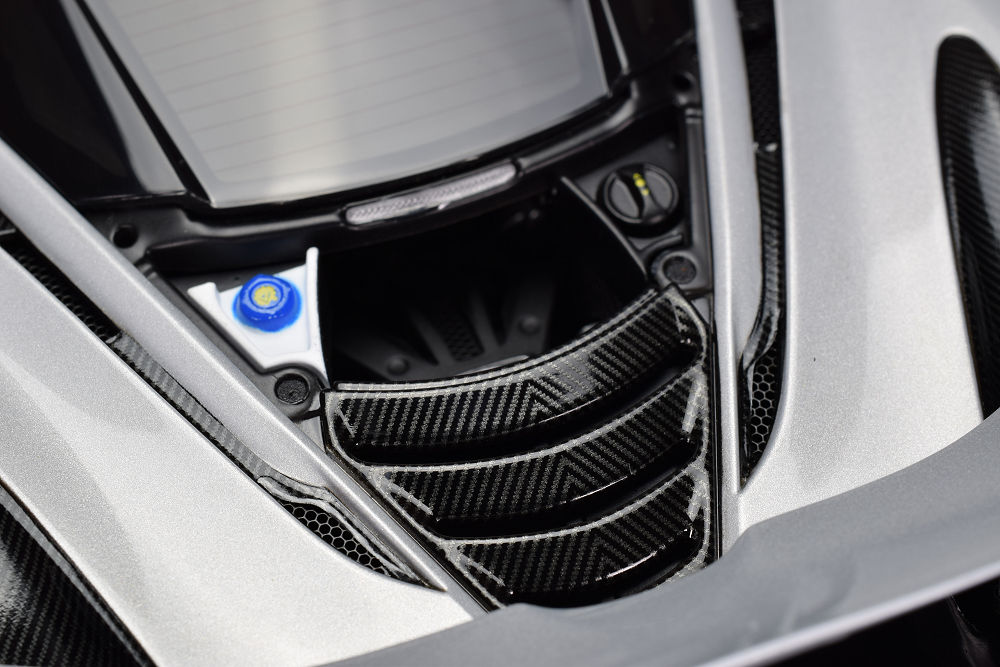 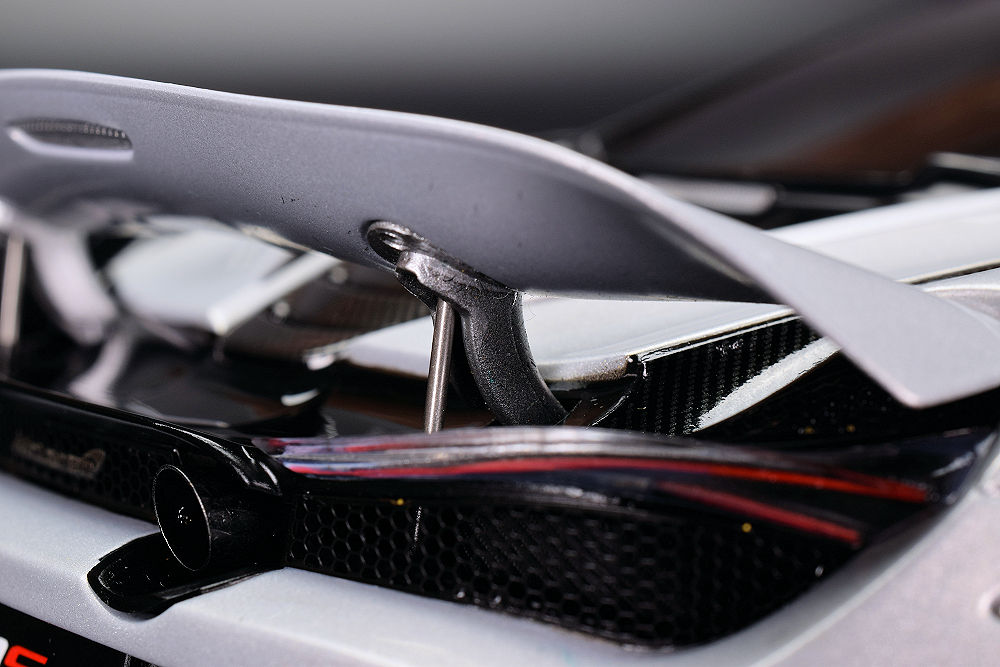 The rear spoiler is fully functional, and one of the elements we continually see from AUTOart and love.  We not going to lie, extracting the spoiler on the 720S is somewhat challenging, but with a little effort, it elevates without incident.  Just to note, we opened and closed it multiple times.  No issues.  Fit and finish and exceptional, note the metal braces and the addition of the small grilles on the upper edges on the bottom side. 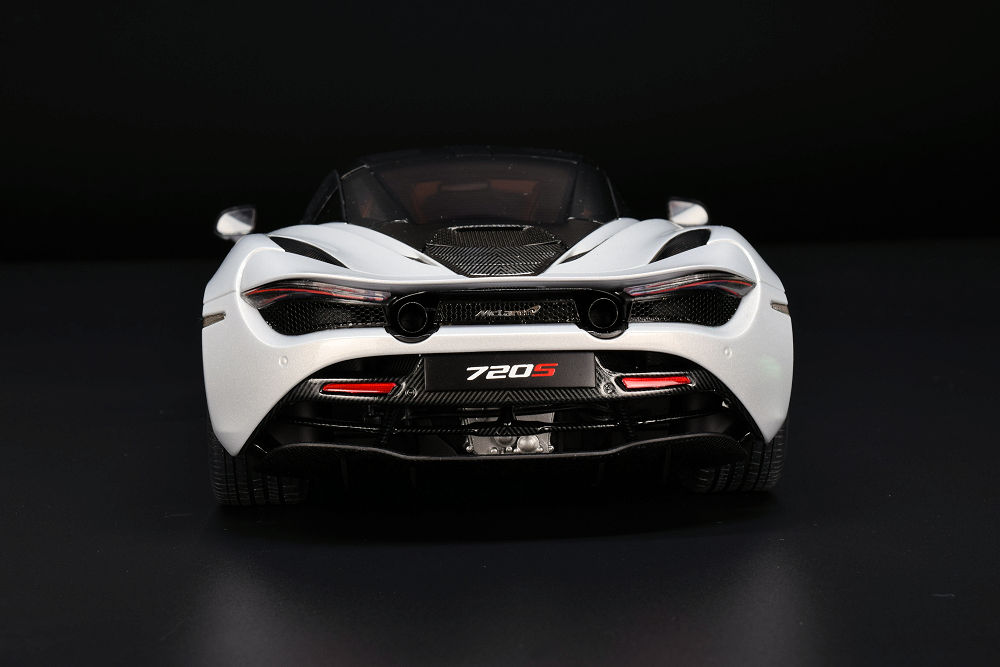 The lower rear section is completed with fully perforated grilles throughout and with the carbon fibre tampon method.  We did mention earlier that the model was free from moulded carbon fibre, this isn’t technically so, the lower undercarriage is moulded carbon.  One-piece AUTOart forgot to add was the small rear reverse light.  Unfortunately, it is not here. 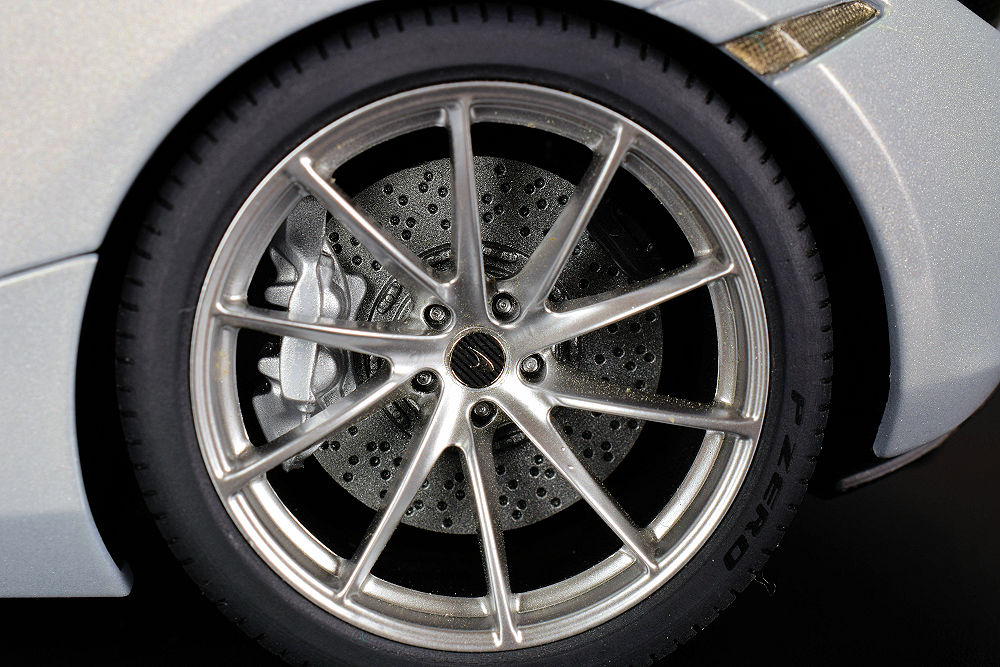 The McLaren 720S is fitted with the 10-spoke wheel design which is painted here in Silver/chrome.  Wheels are produced properly alongside with the rubber tires, which also feature the “P-Zero” script.  The supporting package of calipers and rotors are typical quality pieces from AUTOart.  At first glance, the Silver painted caliper seems to be missing the McLaren logo, but they are in fact there.

Beyond the exterior, the interior does provide access through each door.  AUTOart went with the optional upper glass in the doors which makes it virtually jet-fighter like.  The doors themselves are myriad of assembled parts that support the vision of McLaren engineering. 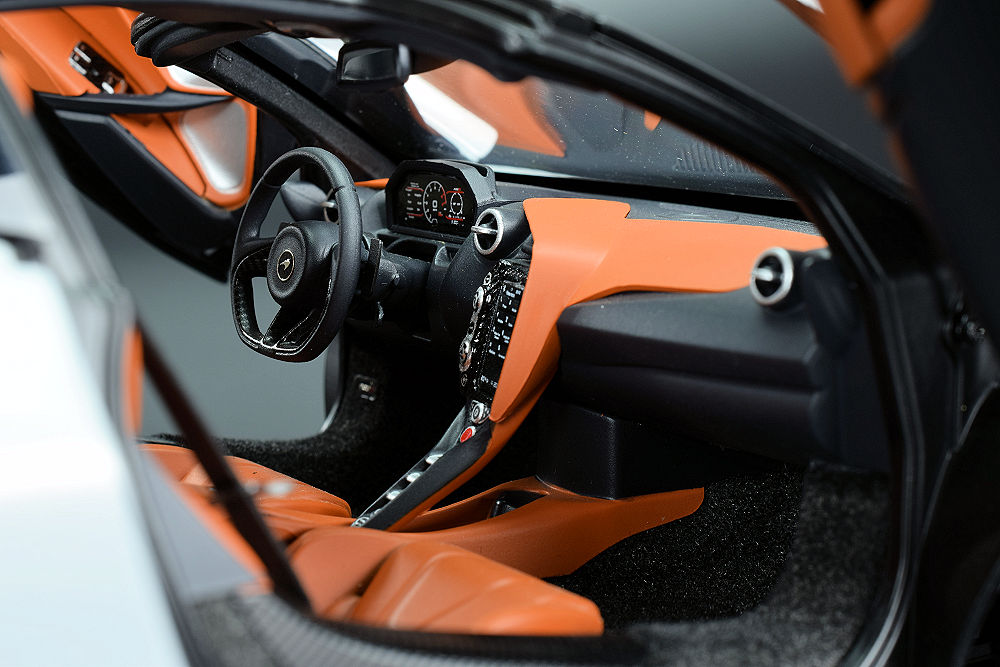 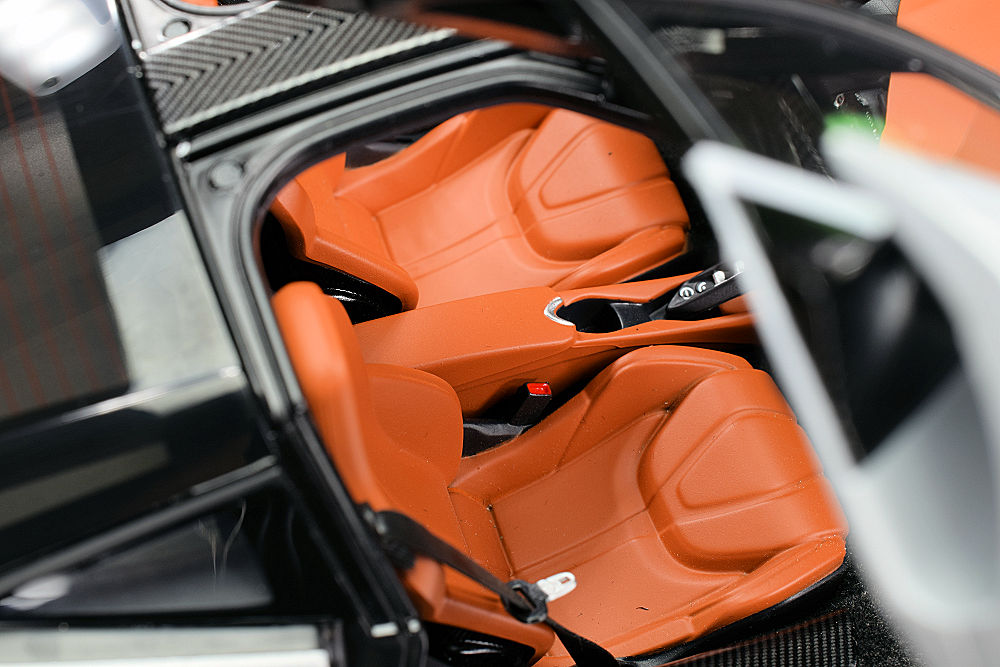 On a side note, we recently touched the new BBR LaFerrari, opening the doors on this model was smooth as silk as one would expect from the 1:1.  With AUTOart that precision was not felt – this is the same experience throughout the models that feature this door style.  Likely attributed to the weight on the composite material?  Possibly.   Before we go inside note the 720S badge and McLaren logo affixed to the outer perimeter.  Nice attention to detail guys. 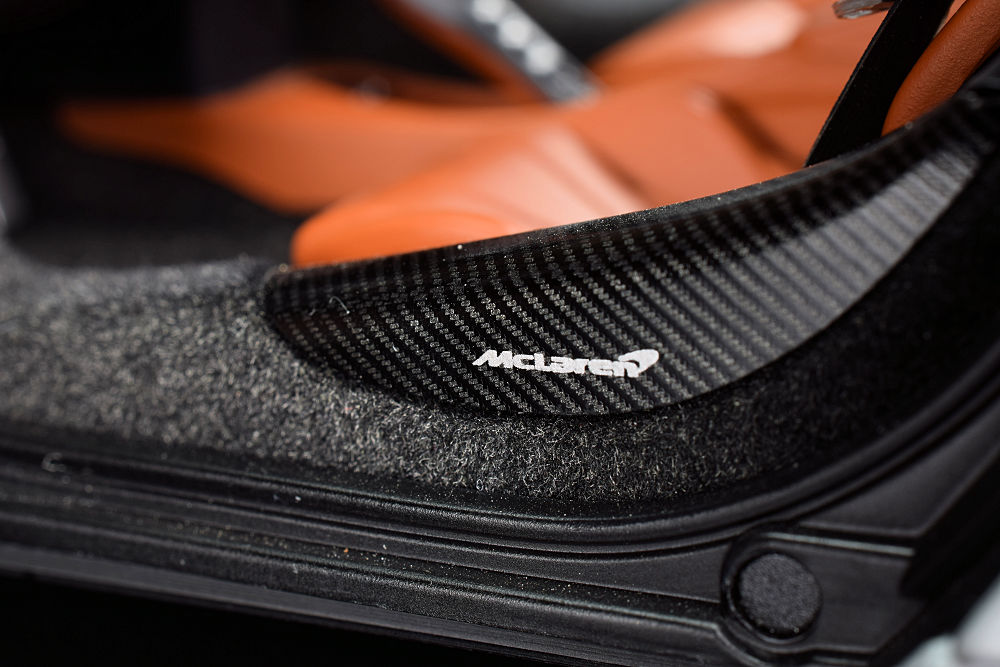 Inside the level of detail is more meticulous with the 720S than we saw on other AUTOart efforts recently reviewed…  Full flocking is provided, along with carbon detailing in the steering wheel, and a good level of attention to the dash centre console and doors cards. The plastic (the combination of Black and Tan bits) here has a more tactical look and less “plastic” looking visually in our opinion.  What we did not like was AUTOart’s choice of rubber seat-belts and the miss on the Silver paint on the lever/button for the air vent just above the infotainment system.  Overall, as said better than their average of late. 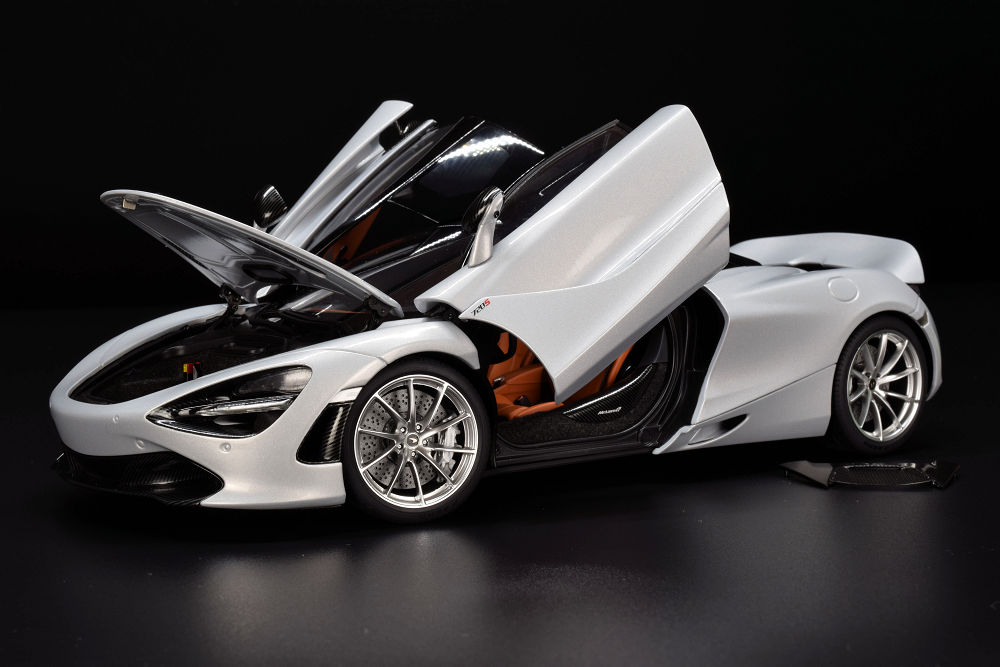 There was much weight on AUTOart to get the McLaren 720S right.  With the sub-par static releases, this modern supercar did require something better.  And we think AUTOart did hit the mark.  The model is not perfect as the review did address, but when one weighs the total package AUTOart does succeed in a fabulous overall effort.  Let’s hope this trend does continue, however, as we’ve seen with AUTOart over the last few years, there is a constant struggle or this pattern of give and take.  Enjoy the pics!