While a Laferrari definitely needs no introduction, you (like myself) will probably never have heard about the G-Patton. Hence a little introduction that is not an end in itself but will prove relevant for the review. So please bear with me and take note.

If you have never heard about the G-Patton, you are most likely not Chinese, as ”G-Patton” is a branding exclusively for the Chinese market where it is named after a very popular movie on the WWII US general. It was launched there with the general´s grandson quoting his famous words “Lead me, follow me, or get out of my way” and the vehicle is appropriately named after him in that it certainly conveys the latter part of this quotation clearly enough. Of course, you may have guessed that, with this name, initially it was not a Chinese product either, but imports from the US, where US Specialty Vehicles (USSV) is producing it as the Rhino GX, another appropriate name for this steel pachyderm. To be precise, it´s more of a conversion process than from-scratch-manufacturing, in that they take a Ford F-450 plus a Ford V10 gas or V8 diesel engine and basically put different steel body-panels, suspension and wheels on it to convert it from a heavy-duty truck into a giant SUV that purposefully resembles an armoured personnel carrier only offered in three colours befitting different war theatres: desert sand, tactical green and this stealth black. 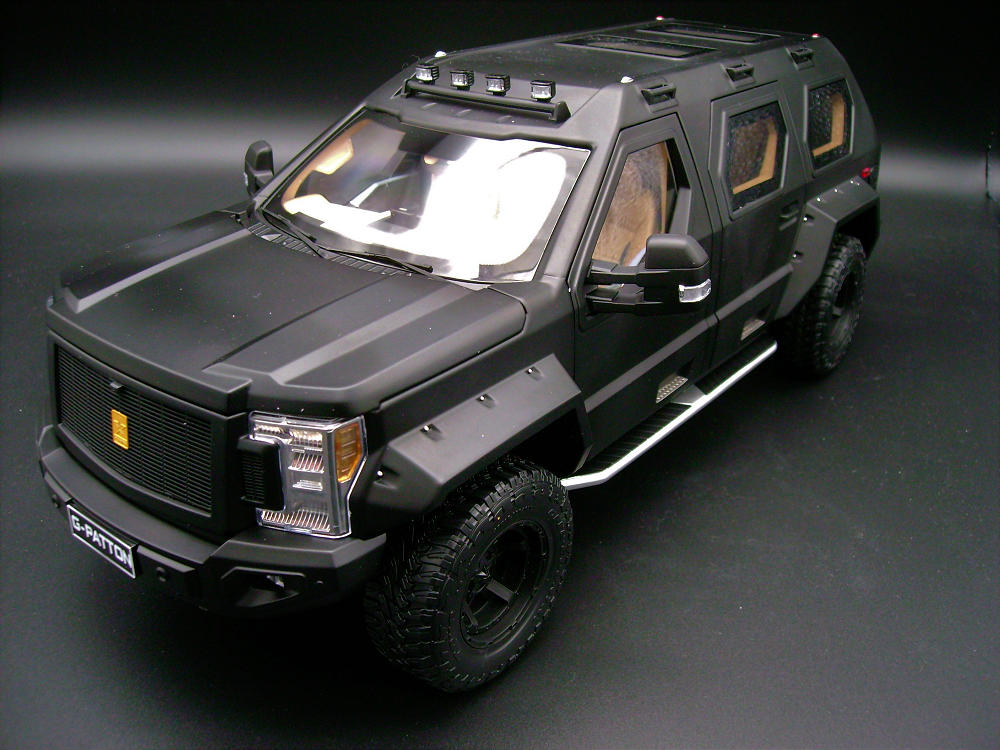 But despite the looks and very much unlike its archetype this clone is not armoured at all. You will, however, easily see how USSV has taken design cues from the Knight XV, which in return is a fully armoured luxury civilian version of the Gurkha LAPV, or its unarmoured twin, the Evade, both by Conquest Vehicles, Canada. Since 2018, though, the Chinese and USSV seem to go separate ways, with the G-Patton starting to differ from the Rhino and USSV being very tight-lipped about it. 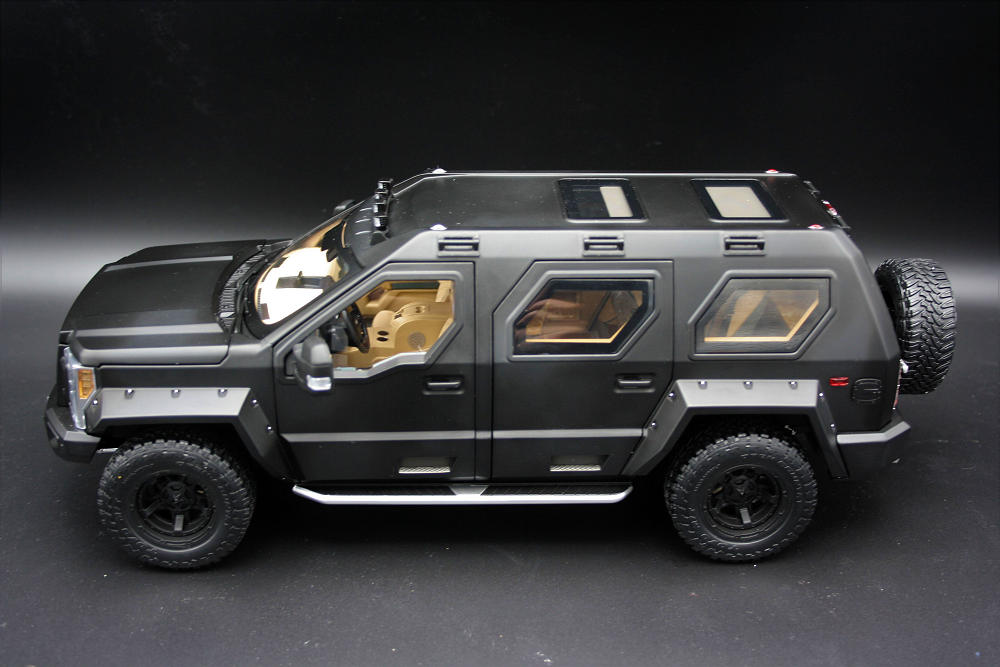 Phew, thanks again for your patience. Now, how is all of that relevant for this model? First things first, it says a lot about the hobby today what is being made as a model and what isn´t. Chinese model manufacturers self-confidently put into production models and specifications for a Chinese market, not necessarily something that would have been an American or European choice. That´s why Kengfai neither makes a Knight XV nor a USSV Rhino GX, but a G-Patton. And we in the rest of the world can take it or leave it, can bless ourselves lucky to get it, as simple as that (many contemporary every-day-cars, e.g. my Ford Mondeo, my old VW Santana, the Rover 75/MG ZT/ MG-7 after the brand had been sold to China by the British, etc. – all these would never have been made if they weren´t popular in China). With the G-Patton it is not only a matter of mere rebranding either. In fact, our model reveals G-Patton´s entire lineage. 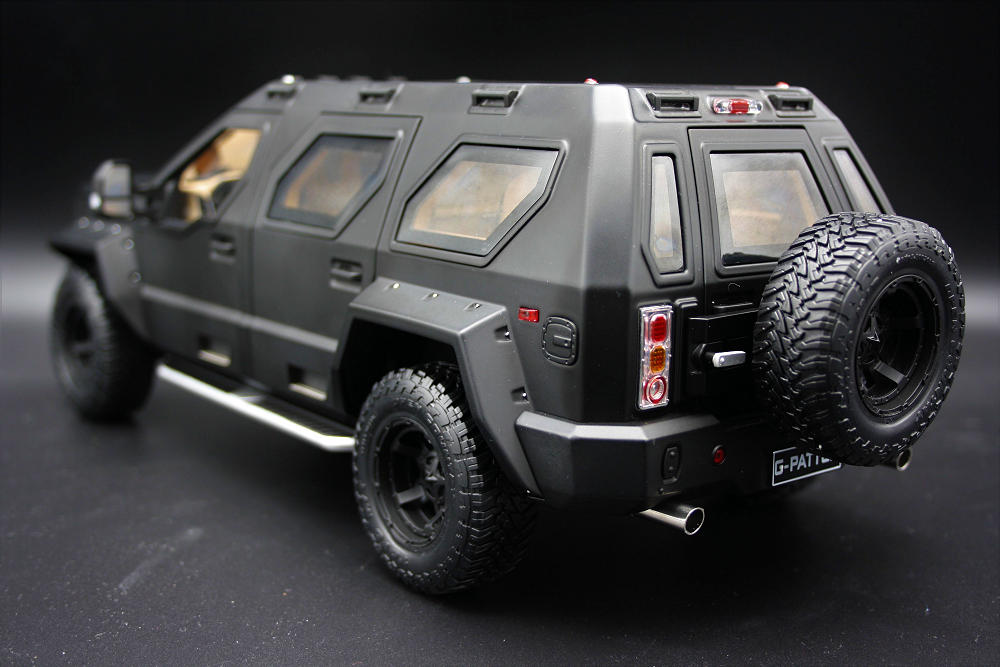 KengFai´s model arrived extremely well protected from Carloverdiecast for exactly the just “north of 200$” for which this site announced it (but is sold out there and has risen in price elsewhere since). The matt black paint is applied evenly, but somehow mine shows colour differences, whitish spots and clouds, some of which could result from the model being handled without gloves, which you should never ever do with any matt paint models. The model has very detailed replicas of the 2017 Ford F 450 headlights, thus showing its origins. The SUV features four nicely detailed additional rectangular led spotlights and to white position lights on the front roof. 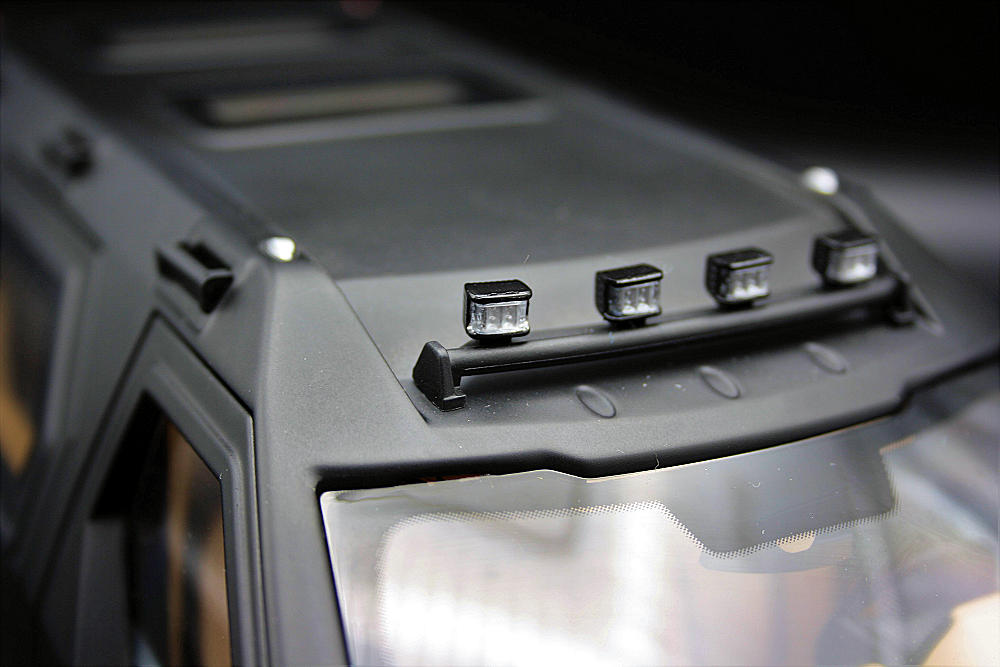 Comparing the model with a Chinese 2018 leaflet of the G-Patton shows that the USSV prancing rhino badges have meanwhile given way to the Chinese brand´s star, e.g. on the front photo-edged grille of the model. Further differing from the USSV, the triangular front bumper corners with inset fog lights are more reminiscent of the Ford Raptor´s design, bearing a G-Patton presentation number plate instead of the G-Patton GX name that was closer to USSV´s own Rhino GX nomenclature on the Chinese 2018 brochure. The rugged wheel-arches are not really an add-on screwed to the body but moulded in one piece with the rest of the diecast body, which contributes to the heft of the vehicle being translated into real weight, 4lb (2000gr) to be precise. The nuts or bolts carefully coloured in shiny silver convey the effect, though. The heavy-duty and fully branded offroad-tires are on detailed black rims whose centre displays the Patton´s US Army style single star, while in the US it has an USSV badge. As usual with Chinese market models, little attention has been given to the brakes. 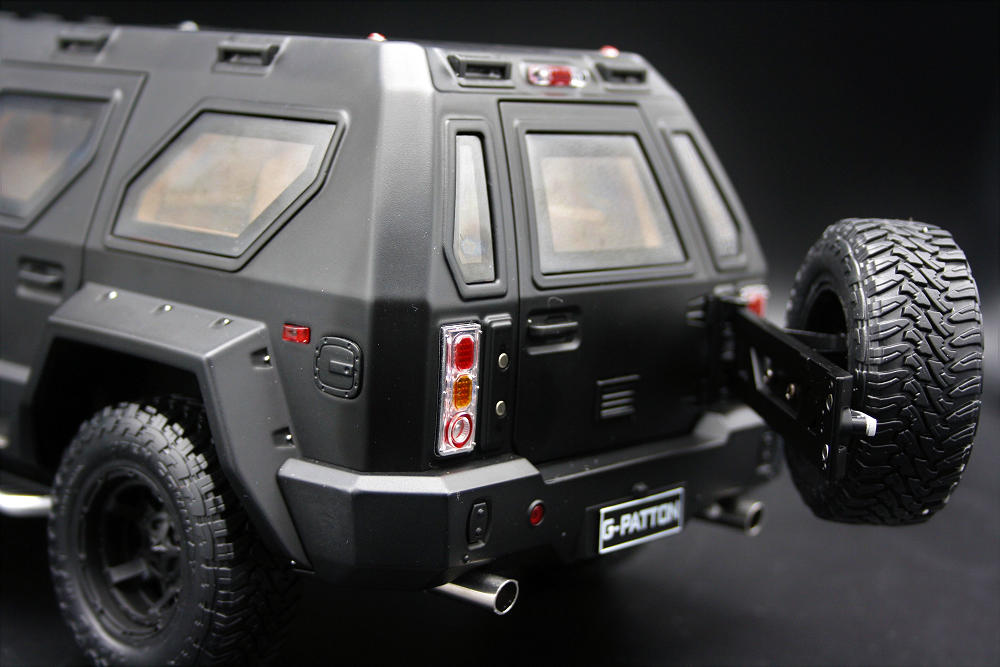 At the rear, a fifth wheel contributes its 18mm tire-width as a spare wheel to the massive 340mm total length of the behemoth. It is held on an extra bar that swings open separately from the tailgate, both held close by magnets. Two exhaust-pipe-tips are so thin and deeply hollowed that I suspect they could be metal. Taillights are executed in great detail with sharp distinctions between clear transparent cover, red and amber insets dotted with led spots and a red ring around the bottom reversing light. Similarly well-done are the fog light in the rear right bumper and the position lights on the roof with a transparent red on chrome fittings. The side markers on the rear flanks and the third braking light with blinker sections are more average. 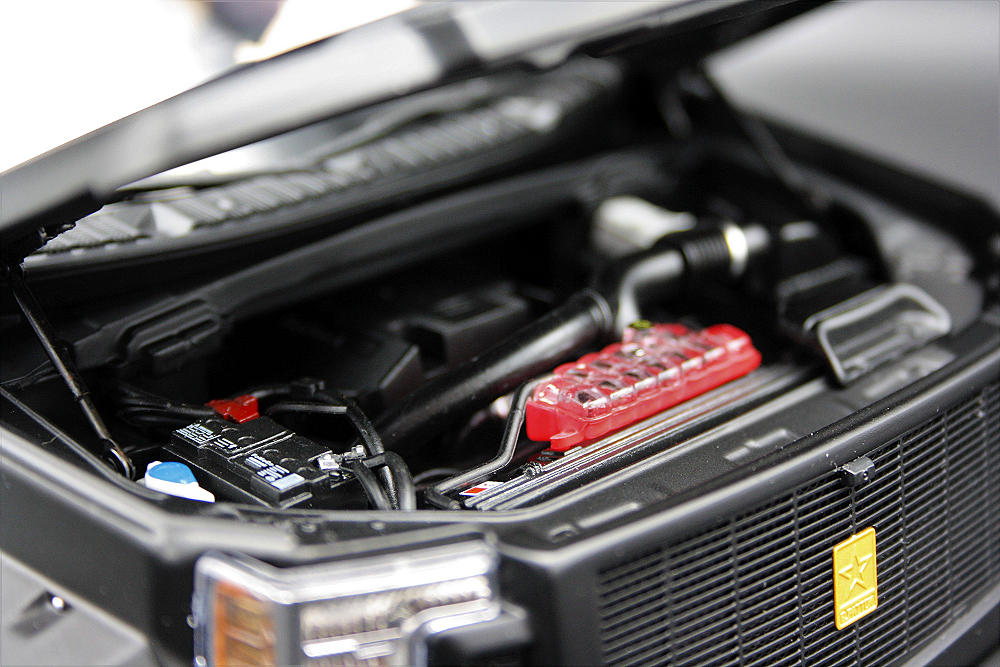 Along its sides the truck has steps, one chrome bar with black insets to step into the car and two rectangular insets in the doors with a knurled alloy treadplate to take a ride clinging to the outside of the cabin by using the grab handles along the roofline on each side and at the rear. Unlike at the real car, these are unfortunately not knurled. A feature often found on models for the Chinese market is the two glass sunroofs that will tilt open and have a sliding sunshade underneath.

As warlike as it may look from the outside, this limousine-like divided cabin of the Executive version has only got seating for four despite the vehicle’s overall size. Two passengers ride in the back on first-class seats complete with textile belts and photo-etched buckles loads of wooden-floored leg-room, a touchscreen at their fingertips on the centre armrest to control the 50” TV above the diner that served as a division to the front cabin. The veneer on the diner is not as convincing as on the floor, but the diner has glass doors on each side that I suspect can be opened, but I have not managed yet. A particularly interesting last-minute-change over the sample that this site showed only two months ago is that the USSV prancing rhino badges, e.g. on the steps of the open rear doors and on the diner top, have disappeared. Instead, the G-Patton star logo has been printed on the stairs and on the interior liner of the C-pillar. Obviously, KengFai has obtained no license by USSV, but only by G-Patton (as the box says), thus illustrating that the two have some sort of beef. 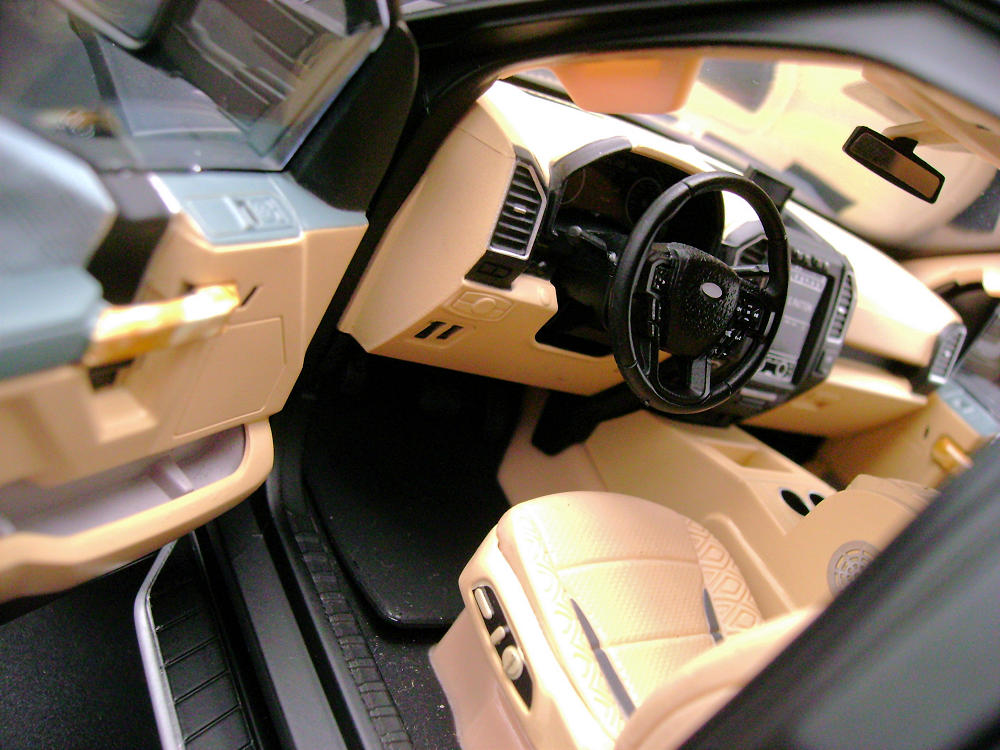 The front interior shows its Ford origins: Here, too, the steering wheel as an empty white oval at its centre where clearly the Ford trademark would be but has apparently not been licensed. And the G-Patton has the more recent Ford 450 and Raptor air vents, not circular ones like the old F 450, USSV or Knight. The footwell is of particular notice, as it has a separate rubber floormat and thereby proves attention to detail in a rather unusual place. The moulded in structures on the seat and doorsills are somewhat nice, but not half as convincing. 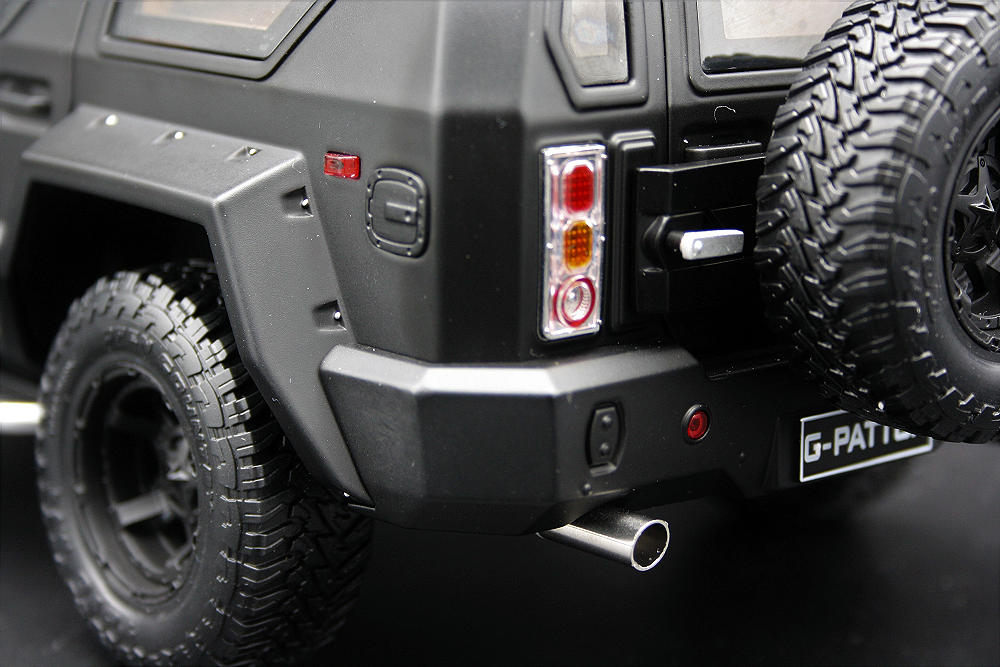 Including the mirrors, this model is exceptionally wide and even surpasses the width of a Mercedes Actros truck at a whopping 155 mm. So a glance under the hood that lifts on struts makes you wonder what the power plant will be: The engine bay faithfully resembles the G-Patton´s Ford F150´s 374hp, 470 lb-ft 3.5-liter EcoBoost V6, thereby making it a deviation from USSV´s less powerful Ford V10 gas and much more powerful Ford V8 diesel power plants. This is one of the major changes of the now independent Chinese manufacturer G-Patton, obviously having severed links with USSV around 2018. I like how the coolant tank is somewhat convincingly split into a transparent top and a red lower part to resemble the reddish coolant liquid. The batteries are fully wired and have printed on them. The level of detail is great and it will be interesting to see how AUTOart´s Ford Raptor engine bay with the similar V6 engine will compare (although the Raptor´s V6 is supercharged to 450hp and 510 lb-ft).

For 200$ this exotic billionaire´s battle cruiser seems pretty bulletproof. But alas, I do have to report that my attention was unduly drawn to how the rear axle is mounted. The plastic axle is mounted onto the plastic spring-leaves by merely a thin plastic pin, one of which arrived broken with me. I wrote to CLDC immediately, addressing both the axle and the colour issues, shared my above pictures, but received no response whatsoever. As a first-time-customer, I feel a little disappointed by their aftersales, especially as the rest of the buying process was unusually pleasant for purchase from China. As a model, this interesting exotic has a story to tell, provides more of a talking point than most models and is certainly worth making an entry into any 1:18 collection with a taste for the unusual.