Today’s model we have under the magnifying glass is the KK Scale Ferrari 288 GTO. The Ferrari GTO is one of those iconic Ferrari’s, which every self-respecting collector should have in its collection. As part of the Ferrari supercar line-up and predecessor of the F40, the car itself doesn’t need a further introduction.

The model is made, as mentioned above, by KK Scale. I reviewed their Testarossa ‘Miami Vice’ as well and that model was rather disappointing. As it seems, KK Scale models are a bit ‘all over the place’ in terms of accuracy, Quality control and detailing. So let’s see how they pulled off the GTO. The GTO is a car that seems notoriously difficult the get correct in scale, as most manufacturers having trouble getting the size and shape correct. 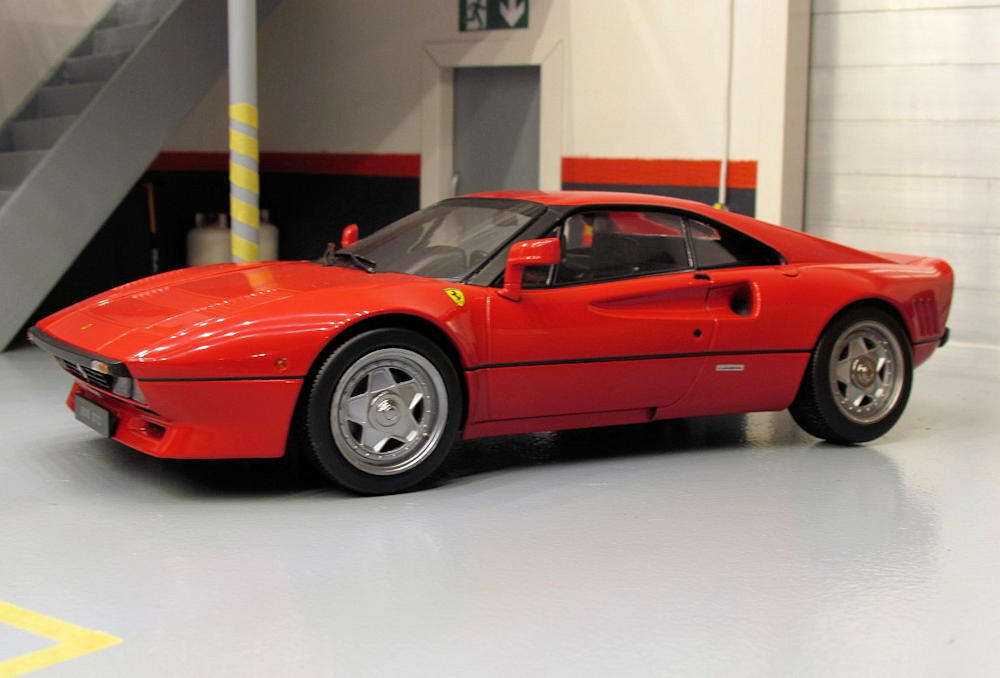 For people unfamiliar with the brand a quick introduction. KK Scale makes sealed metal 1:18 scale models. As far as I know always with functional suspension and steering. Prices are friendly in today’s market, around 60-70 euro’s for a model. Some of their models come in a standard display box and some in a box containing a styrofoam shell. This model came in the latter.

We start, as always, with the exterior of the model. Being sealed, the exterior is of course also the most important part. The first impression is good, no obvious quality control problems and the paint looks pretty good. The red paint shines nice and is applied evenly. Also with this model no dust particles in the paint like on the Testarossa, however, there is a slight orange peel in the paint though. It is only slight, but it is present. KK Scale is in a market where their direct competitors are brands like GT Spirit and OttOmobile. If we compare the paint with those model makers, KK Scale falls behind.

On to the part, I have read a lot of discussion about, for instance, Facebook and other media, about the shape of the model. Has KK Scale pulled it off or not? If we start comparing with pictures of the real car it seems that KK Scale indeed seems to have pulled it off. Maybe the nose is a little bit too low and flat, but only after staring very long at pictures. One thing is sure, it comes close. But, as I tend to do with my reviews, you only know for sure when we start measuring the model. So here we go:>

So can we draw a conclusion from these measurements? Yes, we can. The overall dimensions of the body are seriously good. Deviations of less than (or around) 1% are good. The differences between the model and the real car are in the track width and wheels. KK Scale seems to have given the GTO a slightly wider stance and also fitted the model with different wheels than Ferrari did. The original left the factory on 16-inch wheels, the model has bigger wheels, with lower-profile tyres. It basically comes down to around 18-inch wheels. It looks good, but any purist would want originals. So do I. I read quite a few comments from people that thought the wheels and tyres are too narrow. Well, they are a bit, but it comes down to less than 0,4mm in the front and just over 0,2mm in the rear, so good luck seeing that with the naked eye. 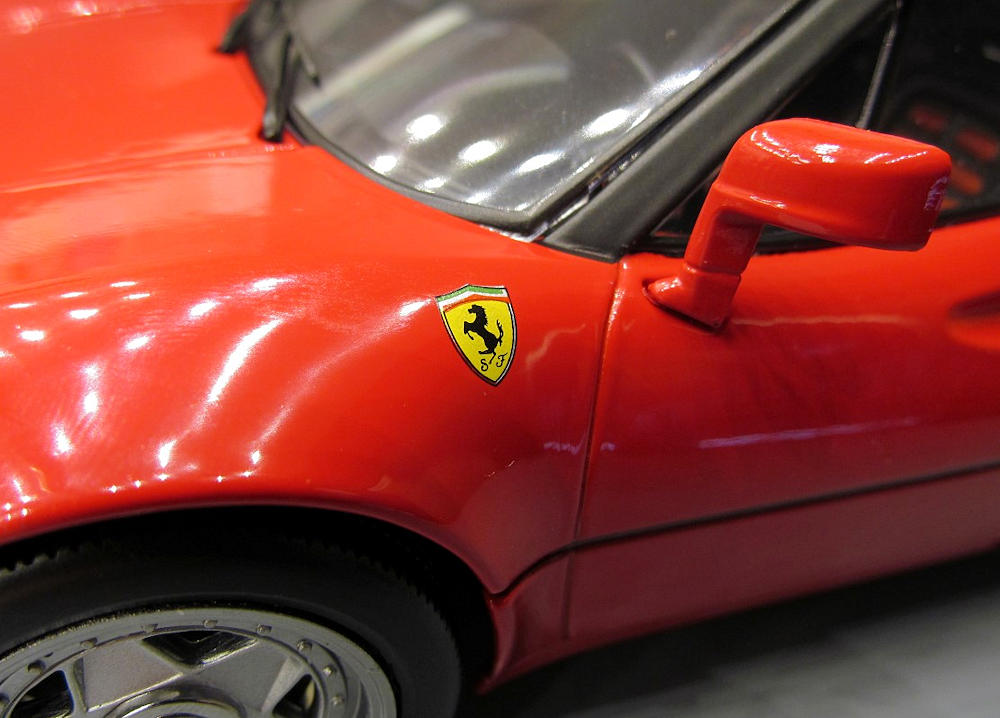 The panel gaps are normally not the strongest point of the KK Scale, being shallow and full of paint. But on the 288 GTO, they are good. Slightly deeper and sharper, giving the car a better look. When the gaps are too shallow, the model starts to look like one solid brick from a distance, but that is not the case here, so well done. The front compartment, engine cover and fuel filler cap are also separate pieces, which definitely helps with the gaps being more realistic. And no, they don’t open. 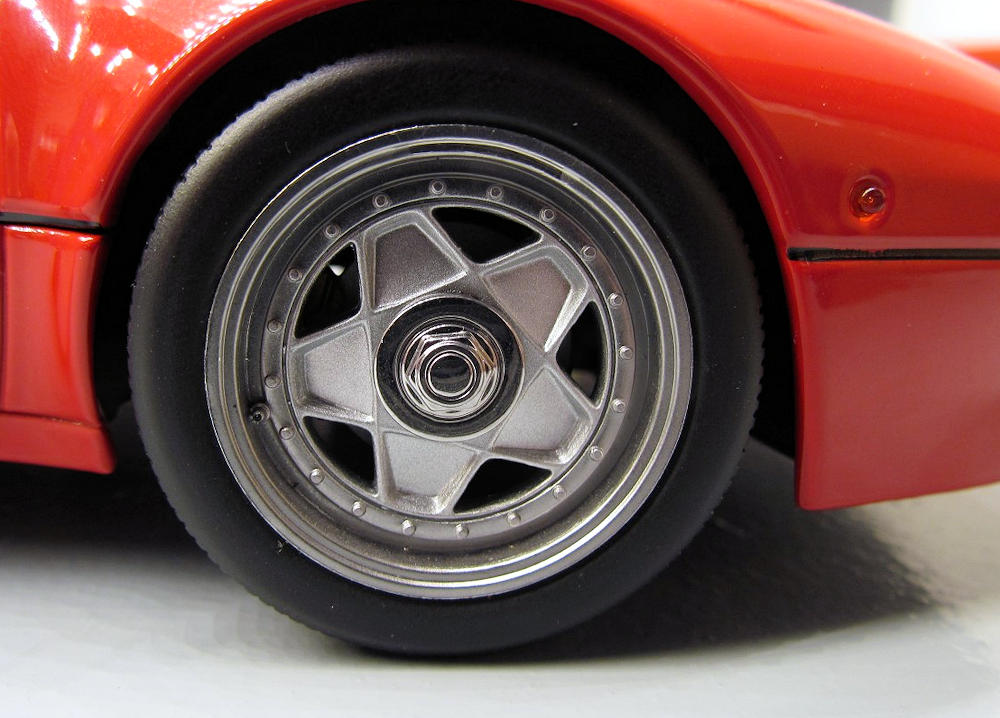 Wheels and tyres are next on the list. We already concluded they are bigger than supposed to be, but apart from that, they look convincing and true to the original, just bigger. I must add here, that I highlighted the tyre valves in black, which is not standard. Behind the wheels are brake discs and callipers visible. The wheels are not very open, like modern wheels are, so the brakes are not overly visible. What are visible looks okay. Also here I added some colour to the callipers, which are standard in the same colour as the discs. The tyres have no branding on the side walls. The thread looks true to the original Goodyear NCT Gatorback tyres the real GTO came with from the factory.

Next are the lights on the model. The front lights look a bit off. They are not ‘chrome’ enough and look too ‘flattened’, they should be more squared. Maybe this is why the front of the car looks a bit low when staring at it for a long time. Also, the lights on the outside should be slightly further back than the ones more to the middle. They are, but less pronounced than on the real car. The blinkers and lights above look okay, the same as the side blinkers. The rear lights look good, can’t see anything wrong with those. 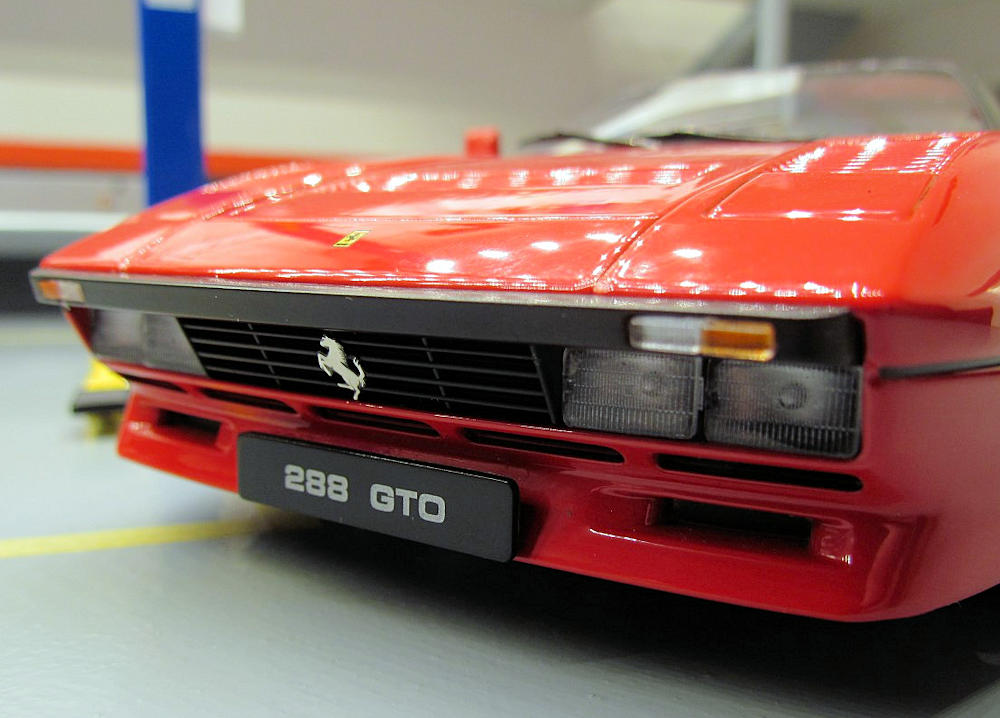 The windows, window frames and wipers look good and solid. Yes, the wipers are a bit plastic, but one cannot expect photo-etched parts for this price. One thing that is missing is the tinted stripe on the top edge of the front windscreen. I can’t find pictures of a GTO that hasn’t got that stripe, so that is a miss on KK Scale’s part. I added the tinted part myself, so it is present on the pictures, but absent on new models.

The various grills on this model are, as expected for the price, sealed. The only one where you can peek through is the engine cover. Behind you can spot some engine parts. I opened this model to add some things to the interior (more on that later), but don’t expect a lot from what is behind. The decals on the exterior look sharp. The Ferrari logo on the front grill looks metal, nice. The rear logo has a silver prancing horse. Most GTO’s left the factory with the horse in black. KK Scale changed this on a later batch of GTO’s. Other bits as the mirrors and door handles look okay. 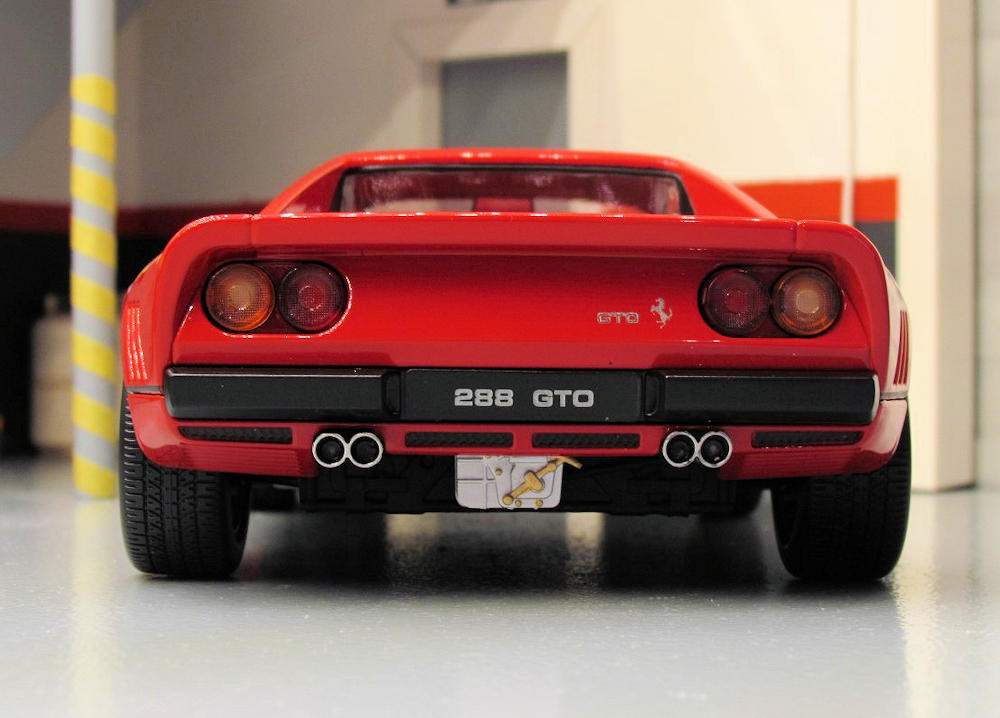 The last part of the exterior to evaluate is the exhaust and underside of the model. The underside shows us a rudimentary engine and gearbox. The gearbox is visible from the rear on a GTO. It would have been nice if KK Scale paid a little more attention to that part. It looks cheap and doesn’t represent the original very well. The exhaust tips look better, but comparing to the original a bit too shiny chrome. The inside is made matt black, which adds to the realism. 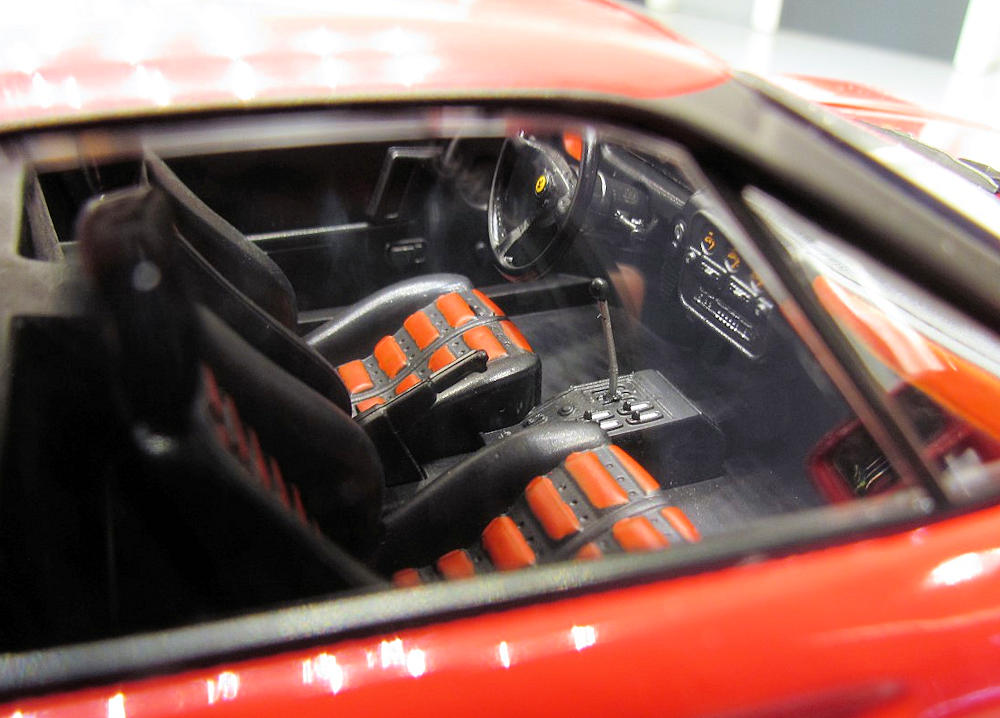 The interior was one of the elements the KK Scale Testarossa failed badly. Is the GTO better? Yes, it is. Of course, it is not hi-end, but at least the plastic looks better and there are no ridiculous mould lines visible everywhere.

There are 2 batches of GTO’s made by KK Scale. The first one had fully black seats and a dashboard. This model from the initial batch. I added the red on the seats and dashboard myself. The later batch from KK Scale has the red inserts on the seats as standard. One part that is missing from this interior is the seatbelts. Other KK Scale models provided cloth seatbelts, so why the miss here?  I don’t like this inconsistency. 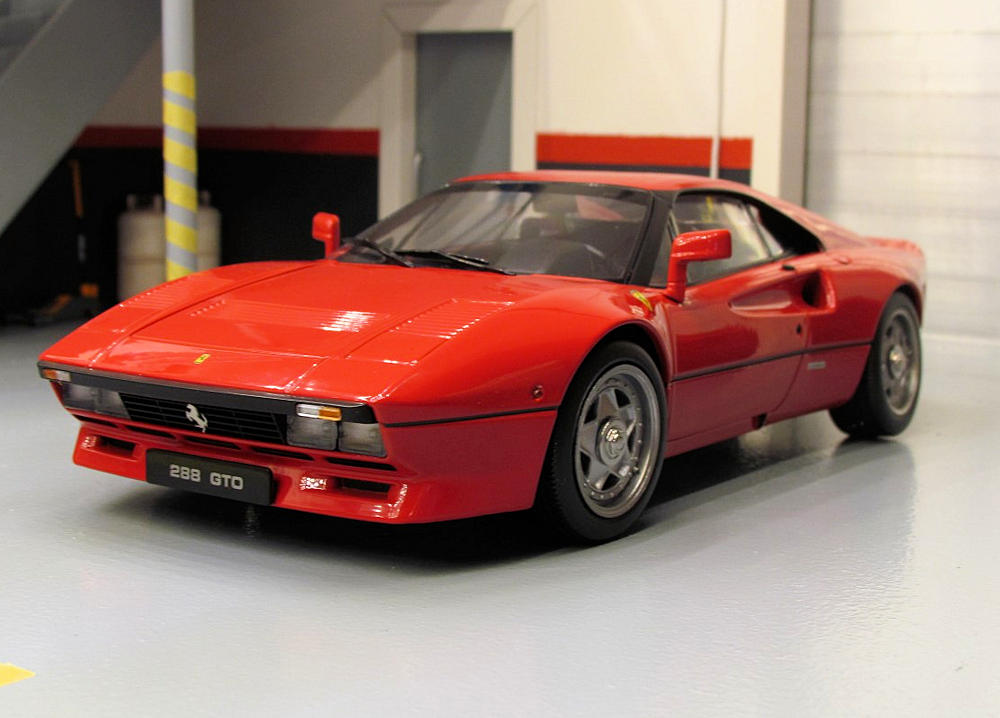 So what is my conclusion? Is it worth buying? In my opinion, it is. It checks most of the things one should expect from a sealed model from this price range. The shape and size are good and it displays very well. It has some shortcomings, like the rather big wheels, cheap-looking gearbox and missing seatbelts. A lot of collectors will like the slightly more aggressive stance and bigger wheels, but I prefer my GTO more original.

What are the alternatives? Well, we have the old Hotwheels elite, which is full opening but isn’t the best in terms of shape and good luck finding it for a fair price! Then we have the more expensive resin models from BBR and Looksmart and the less expensive GT Spirit resin. I haven’t seen the latter in the flesh yet, but no doubt that model and the KK Scale will come very close in the end.  In the end, it will be all up to you. Happy collecting!