Until the announcement from Kyosho back in late 2012 that a 1:18 scale, fully detailed De Tomaso Pantera would finally see light, the only option for collectors was the less than stellar Hot Wheels representation.  Nothing against the Hot Wheels effort, but I personally hate chrome and, add the chrome wheels, I could never bring myself to purchase one.  Well the wait is over, the Kyosho version is finally among us, but was the wait for the panther well worth it? 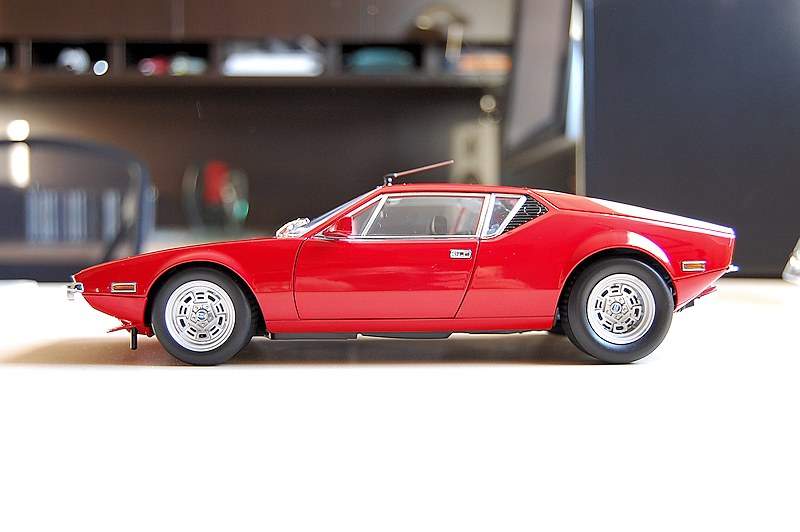 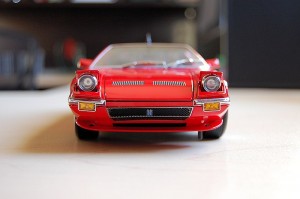 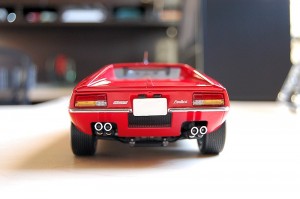 The Pantera was a sports car produced by the De Tomaso car company of Italy from 1971 to 1991.  The model produced by Kyosho in 1:18 scale is the Pantera L European version with chrome bumpers and front lower chin spoiler.  Overall exterior body lines capture the original quite well.  Panel gaps and shutlines are very good until you visit the front hood.  As my photos will point out there are some shortcomings that are quite noticeable – very evident when looking at the model from the front.  Also note the perforated grille – a little less than spectacular install.  My model actually arrived with the driver side bumper sitting at the bottom on the box.  Thankfully it was a simple fix with CA glue.  A friend had an even worse experience, his model was riddled with inconsistencies, too many for me to list here.  It surely seems like Kyosho still has some work to do in the quality control department. 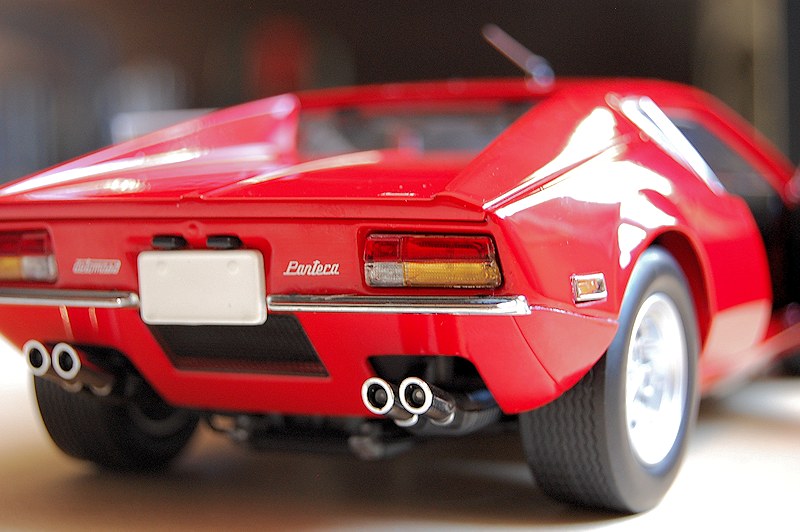 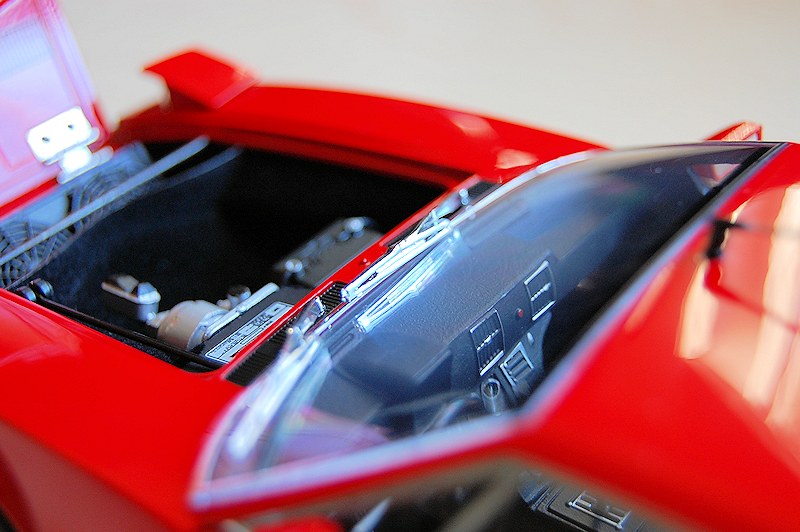 Chrome work is a little lacklustre in my opinion. I would expect more from the Kyosho brand.  What I do like is the quality of materials used for the headlights, tail lights, side indicators, and decals.  Very nicely executed, adds to the realism one would expect from a premium model.  The exterior paint has been a bone of contention with Kyosho, again they fail here. Waves, orange peel, no rhyme or rhythm to the exterior paint work.  It’s about time you figured it out, Kyosho!  Lesser brands can do it, so why can’t you!?  The headlight operation was a little problematic too, but I finally managed to get them in the open position.  It’s quite funny and sad at the same time, the overall model is quite good, actually very good, and then you find the bulky windshield wipers – poor chrome work with detail that doesn’t match the level of the rest of the model. 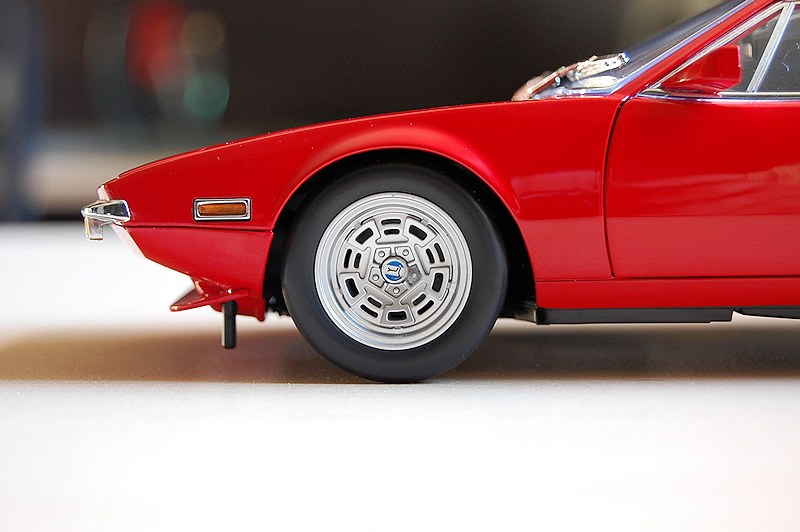 The rims on the Panerta L match the period.  The integral work of the design is captured, the centre also features the De Tomaso logo, though I don’t like the choice of material they used for the tires.  It’s too hard and toy like, and a softer compound would have been the better choice.  Overall thumbs up here. 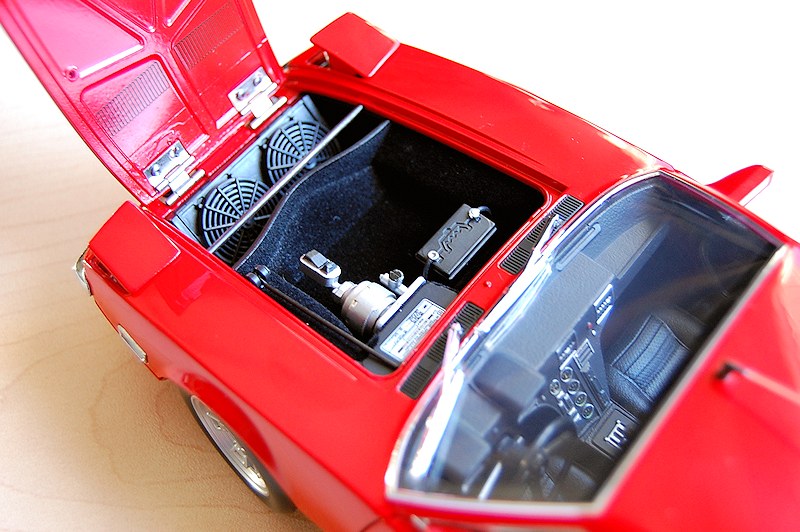 The Pantera L features two accessible areas, and the front storage is nicely detailed with brake components and battery.  No spare tire here.  It is also lined with carpeting, all together it works well.  What is strange is the choice of hinges used to anchor the hood to the body.  They are too large, and way too much play.  Most likely the cause for the poor panel gap/shutlines as noted above. 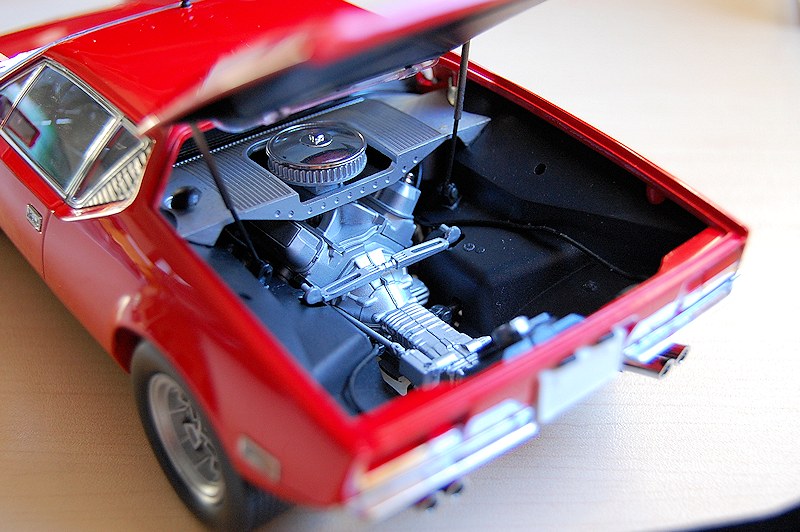 The rear engine compartment is where the model excels, especially when you compare it to the poor Hot Wheels model.  Two struts mimic the opening and closing of the hatch – nice work here Kyosho!  The nicely lined carpet storage compartment is removable, which opens up to a wealth of detail.  This is where the Kyosho Pantera L shines!  I’ll let the photos do the talking here. 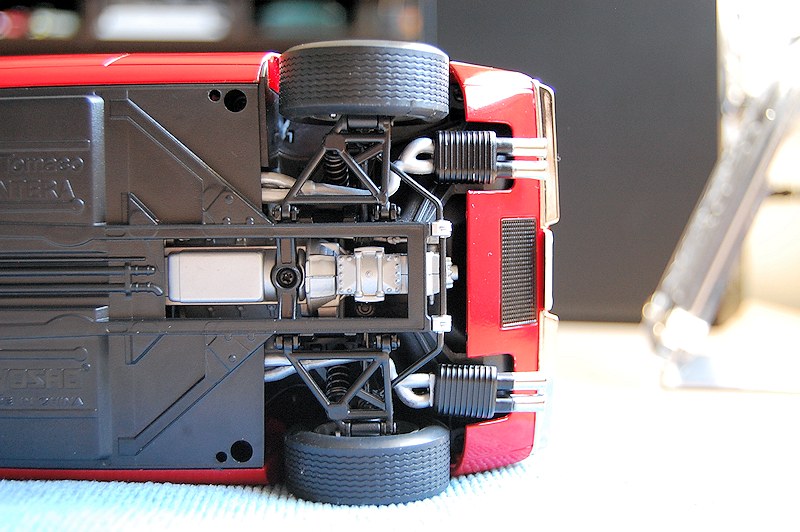 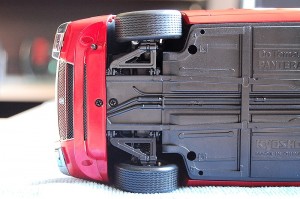 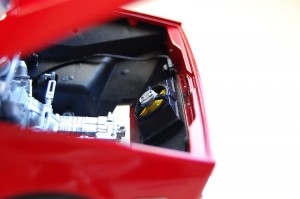 Underneath the model there is a visual treat too.  Suspension components front and rear are very well accounted for, especially in the mid to rear section.  Motor and exhaust components are very nicely detailed.  Note the passenger side exhaust is out of position for the photos found within the review, unfortunately I did not notice this during the shoot.  I corrected the problem shortly after. 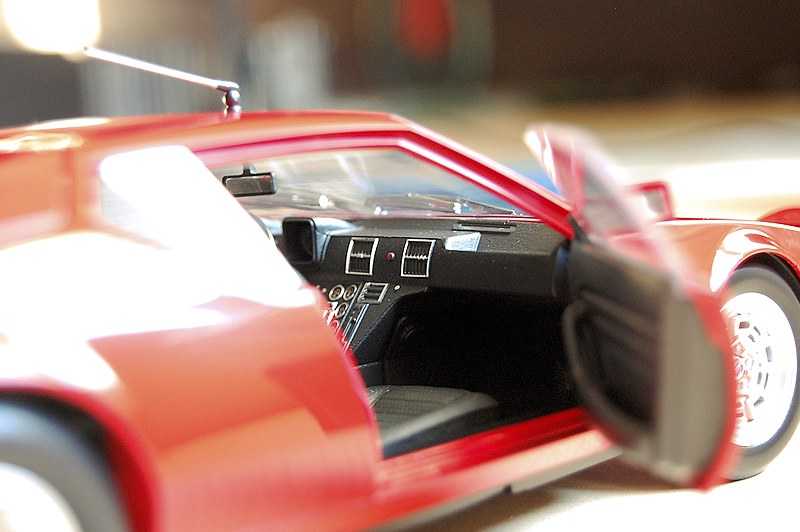 Interior is executed along the same lines as the motor, pretty much complete.  All bits seem to mimic the original.  What is featured inside is the European dash, which differs slightly from the North American version.  Other than the doors not opening to a position I thought they should, Kyosho has done an excellent job here. 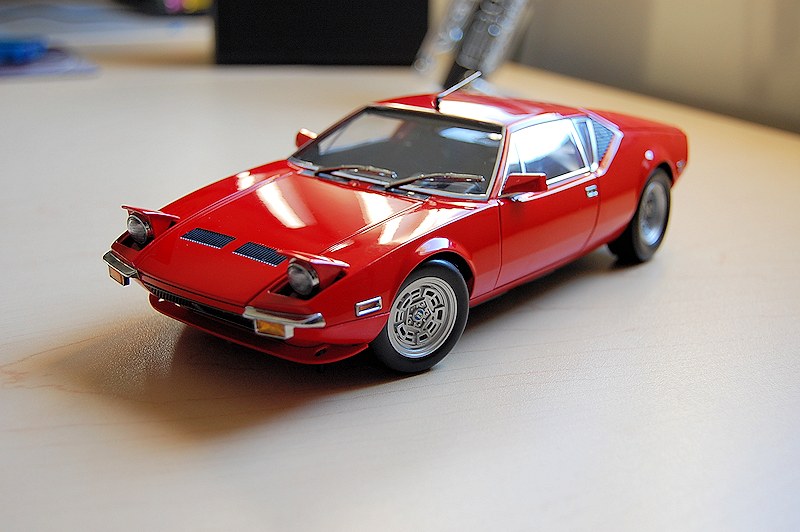 It may look like I’m nitpicking, but hey I had big expectations for this model.  Don’t get me wrong, there are some shortcomings with this model, but overall it is well above average.  The Hot Wheels replica can’t hold a candle to the new Kyosho model and rightly so.  Kyosho still has much work to do when it comes to the complete package and quality control.  Hopefully they will address the shortcomings and strive to move in the right direction before collectors move on to other brands.  Enjoy the pics! 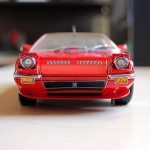 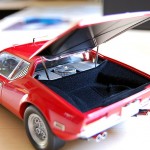 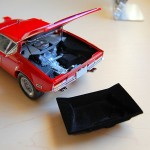 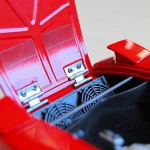 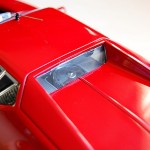 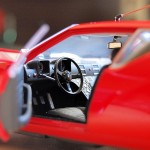 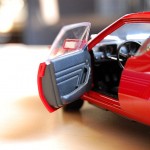 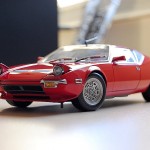 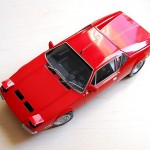 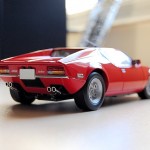 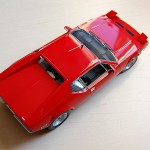 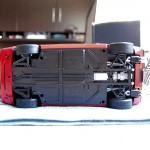