Minichamps makes stellar German diecast reproductions. I’ve been a fan of German cars for most of my life. So, it’s not surprising that the Minichamps 1:18 Porsche 911 GT3 Touring was at the top of my wish list. Covered in baby blue with silver GT3 rims, it’s hard to not gawk at it. While Minichamps also offers this in yellow and chalk, blue is obviously the obvious choice.

I got this 1:18 Porsche from Diecast Models Wholesale for a think-about-it-seriously price point of $150. While you can certainly pay more, a buck fifty isn’t exactly inexpensive. As the old saying goes, you get what you pay for (at least you should) so I was pleased to find but that quality isn’t foreign to this model. That shouldn’t surprise as Minichamps is one of the last high-quality metal diecast manufacturers. 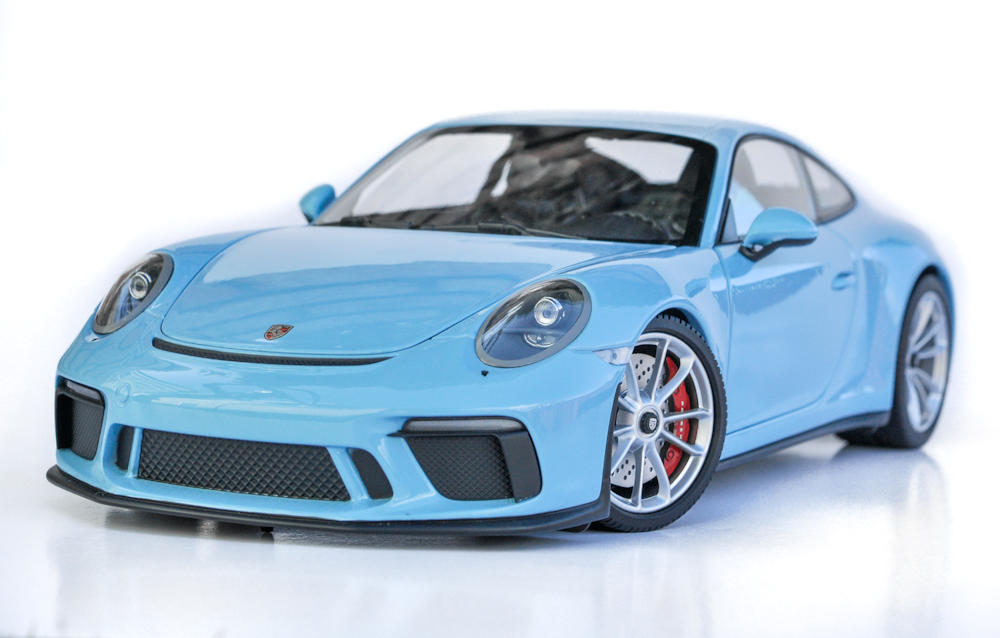 Before you even get to see the car, you are first taken by the packaging, which is some of the best on the market behind only AUTOArt Signature. Straight out of the box, you know why you spent nearly $200 after shipping. And as the box says, this is one of only 300, so this GT3 is sold out – and for good reason. The car is nothing short of breath-taking. Very crisp shut lines, a minimum of exterior plastic and a jaw-dropping colour combination. 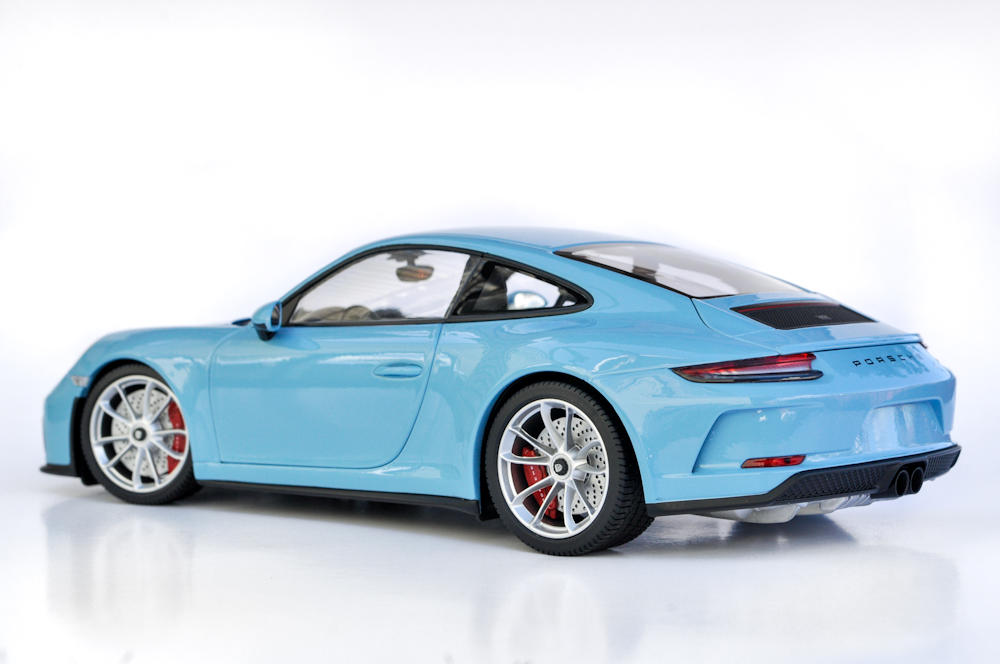 Looking down the front of the car is a darn near perfect view. Unfortunately, Minichamps took the cheap way out on front vents along with most of the rest of the vents around the car. It hurts to see plastic vents on such a pretty car especially when Minichamps could have used mesh-like AUTOart diecasts at the same price point.

Moving over to the side profile provides a beautiful view of spectacular rims, phenomenal looking brakes and the 10-spokes which I believe do look best on this car. 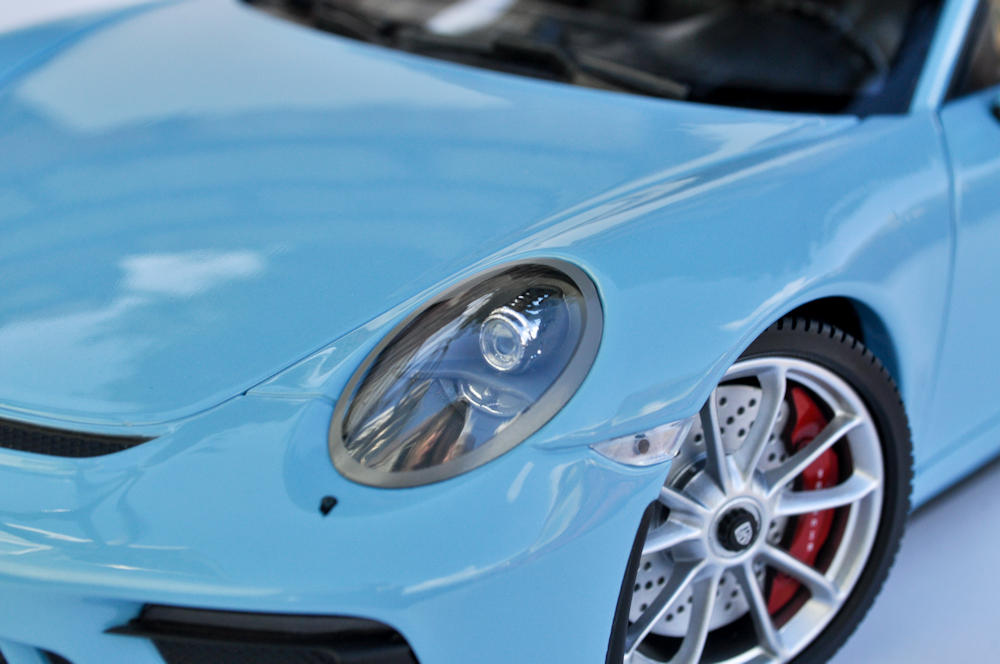 In the back of the GT3 things as good as ever.  The 991-era tail lights – minus the rear light bar which I hate – are the best ever on a GT3 and make the rear an ideal full-size design. In 1:18, Minichamps dilutes the rearview with the already-mentioned cheap vents and shorter than preferred depth on the central dual exhaust. Those minor points do not detract, however, from an otherwise beautiful exterior reproduction. 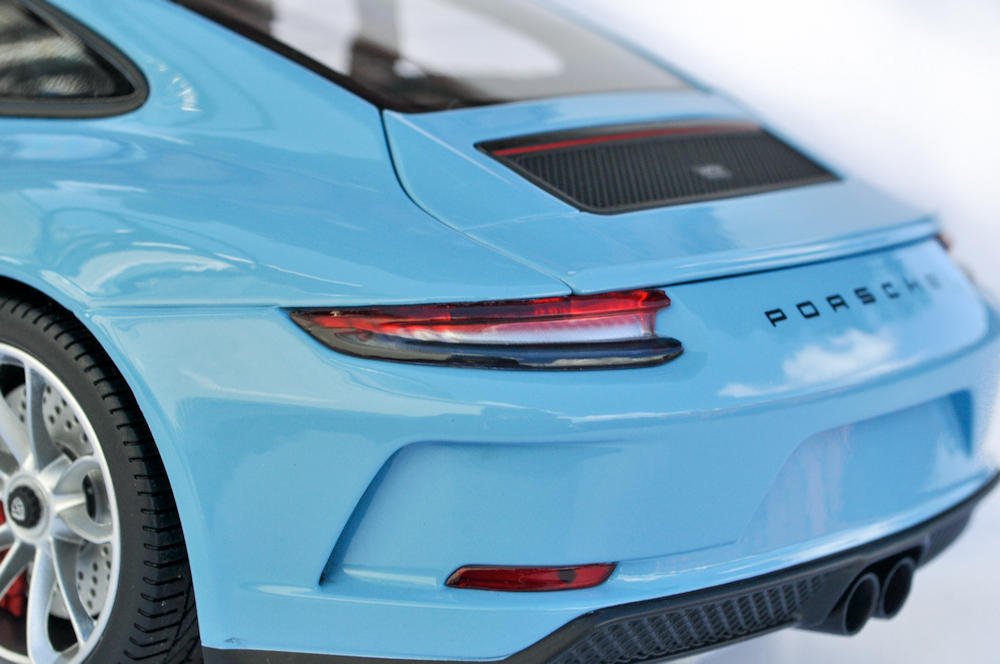 Just like in the full-size real world, once you get past a certain price point in 1:18 land, you have certain expectations. When you’re north of $100 and you look inside the cabin, I expect to see carpeted interiors with lots of colours. This GT3 is carpet-less and the interior colour scheme blandly represents the greyscale quite well. Sure, bucket seats with an embossed Porsche crest are nice, but I think a tan leather interior would suit this car best along with a bit of matching carpet.

Luckily Minichamps still included other important details. You’ll find the Sport Chrono clock, a detailed gauge cluster, and elegant aluminum trim. Plus all of the buttons in the center console are there too – can’t forget about those. 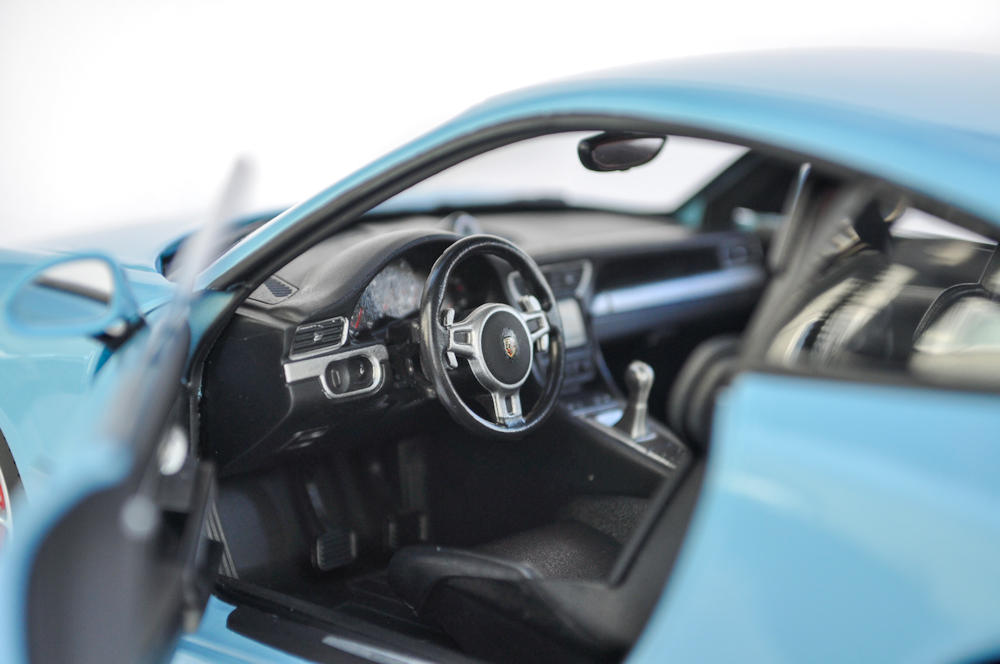 Under the hood, there isn’t much to see. With the start of the 991 generations in 2012, Porsche covered the engine in plastic. Minichamps followed suit, of course. The highlight of the viewing experience is a plaque reading “GT3 3.8” in silver. Let’s move on. 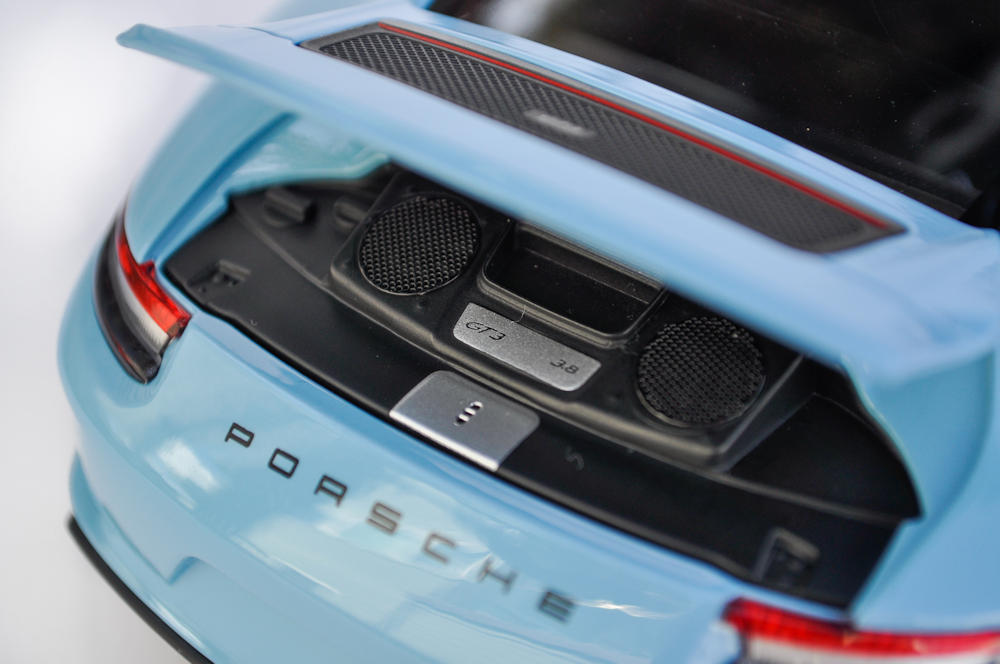 In the big picture, the Minichamps Porsche 911 GT3 Touring 1:18 is well worth its price. Yes, I had my nitpicks but this is one fine 1:18 Porsche GT3 in both beauty and quality. Diecast Models Wholesale still has one in yellow. It may not be baby blue but it’s still a beautiful car!