Subaru has a history of making some really cool cars for the Japanese and European markets and one that instantly comes to my mind is the Impreza STI 22B. Produced in a limited number of only 399 pieces worldwide, those who blinked most likely were not able to get one as they sold out within 48 hours. Marking Subaru’s 40th anniversary and their third consecutive manufacturer’s title in World Rally Championship, there was no better way to celebrate than the 22B STI.

This low-production model saw a displacement increase from 1994cc to 2212cc making it no slouch. With wide flared fenders, a unique hood, a WRX-inspired front bumper, an adjustable rear wing and its unique blue colour this was a looker. Definitely a special car, after all, two of the production cars went to Colin McRae and Nicky Grist who drive in WRC. It is worth noting that today these cars sell for a quarter of a million US dollars and that is if you are lucky to even find one for sale. And since most of us reading this likely cannot afford one, Solido has released a model in 1/18 scale of both the street and rally versions. Since I could not decide on which one to review, why not analyze both? 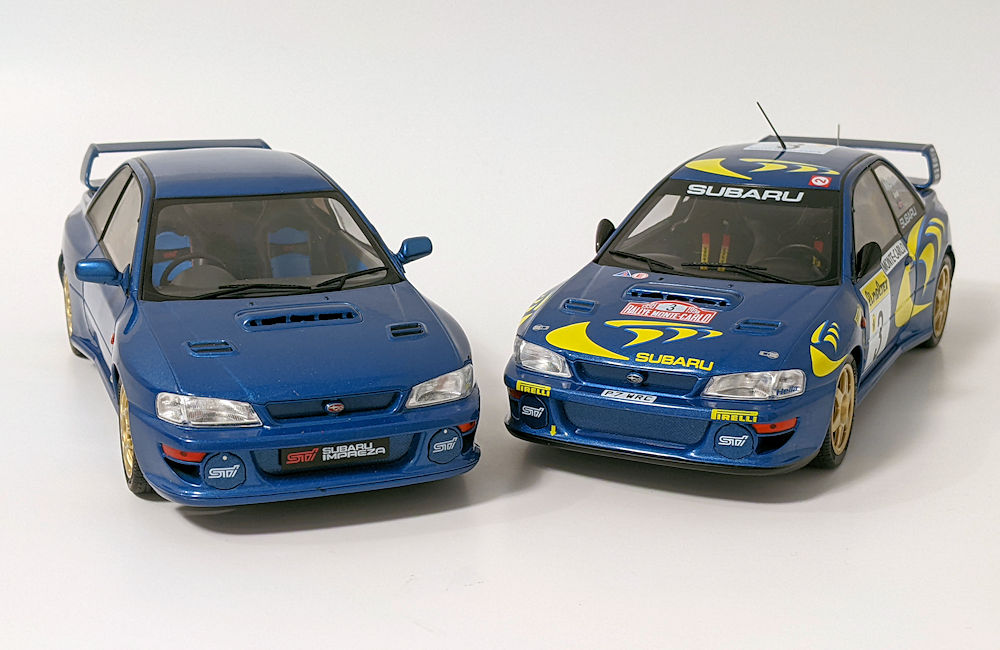 Both models are packaged in the usual Solido box with see-through plastic. However, the rally version has a racy-inspired look with a rev counter, track curbs and competition script design at the front, whereas the street version has the usual Paris skyline. Both models have mirrors attached to the model and come with a bonus. This is something new from Solido, something a little extra as they now include a calendar with great pictures of their models (a different one for each month). It is nice to get something extra as I can’t think of any other budget brand that includes freebies anymore. Back in the day, Burago and Maisto used to include little booklets of their model range, however today it is only in the history books. Thumbs up to Solido for including a nice calendar! Let’s take the models out of the box and have a look at how Solido has done on the models themselves. 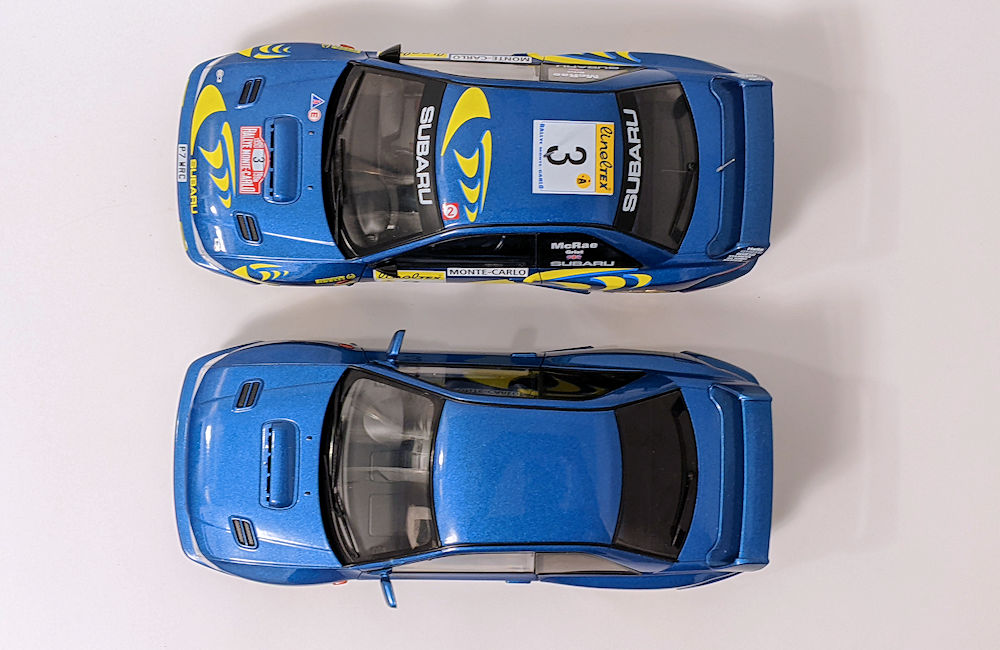 The first impression is really good – I have a feeling this one is a solid effort. The paint looks very good on both and the decals on the rally version are right on point. The rally version comes with two antennas, a silver one mounted on the trunk and a black one which comes separately and goes into the little pinhole on the roof. I strongly recommend you glue the black one onto the roof immediately as you will definitely lose it without doing so. Why you may ask? Well, when placed into the pinhole, it sits loosely and will fall with every movement of the model. 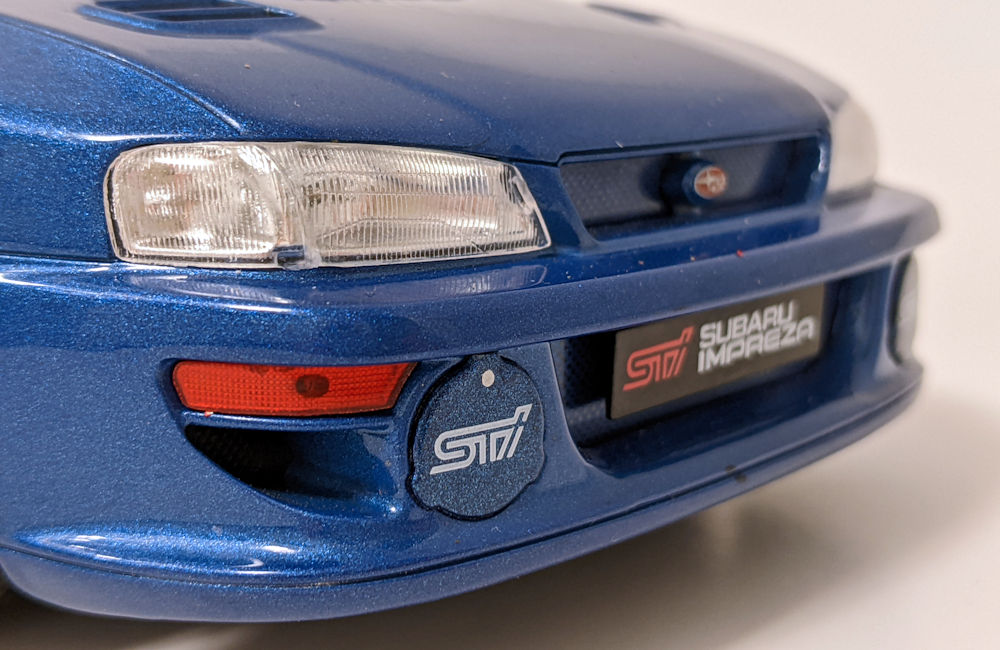 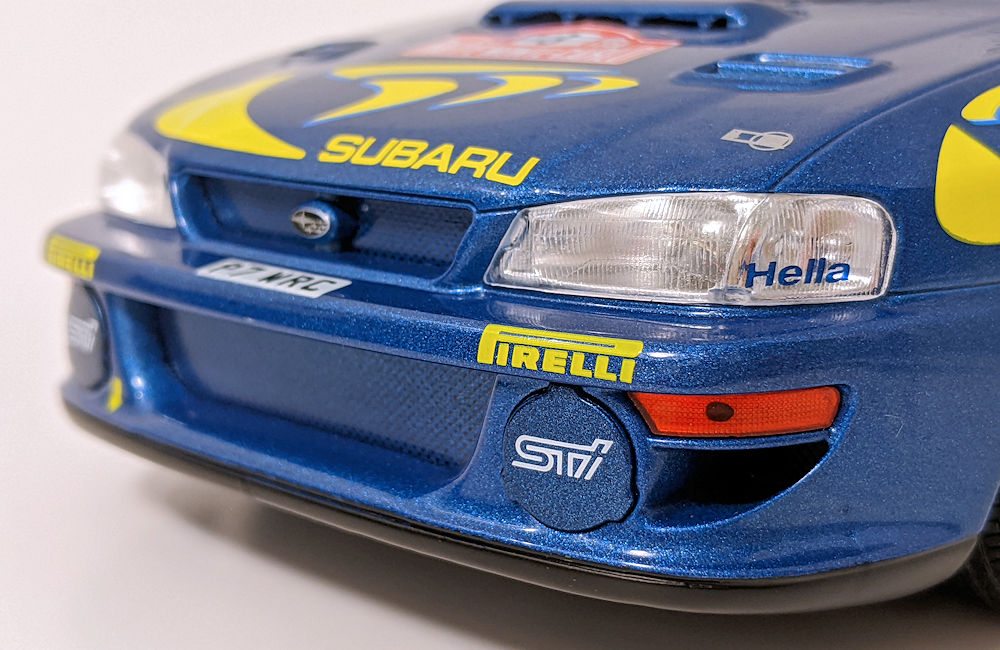 At the front, there are no perforated grilles and in this price range that is a given. Bumpers show depth, and headlights and orange turning signals are in place where they should be. Hella and Pirelli sponsorship decals are present on the racing version in the correct spots just like the real WRC car. Both models have Subaru emblems and STI badges again true to the originals. Air scoops are present in both examples, and side vents and windshield washer nozzles have enough black paint to simulate depth and dimension. The Rally version does have all the extra decals. 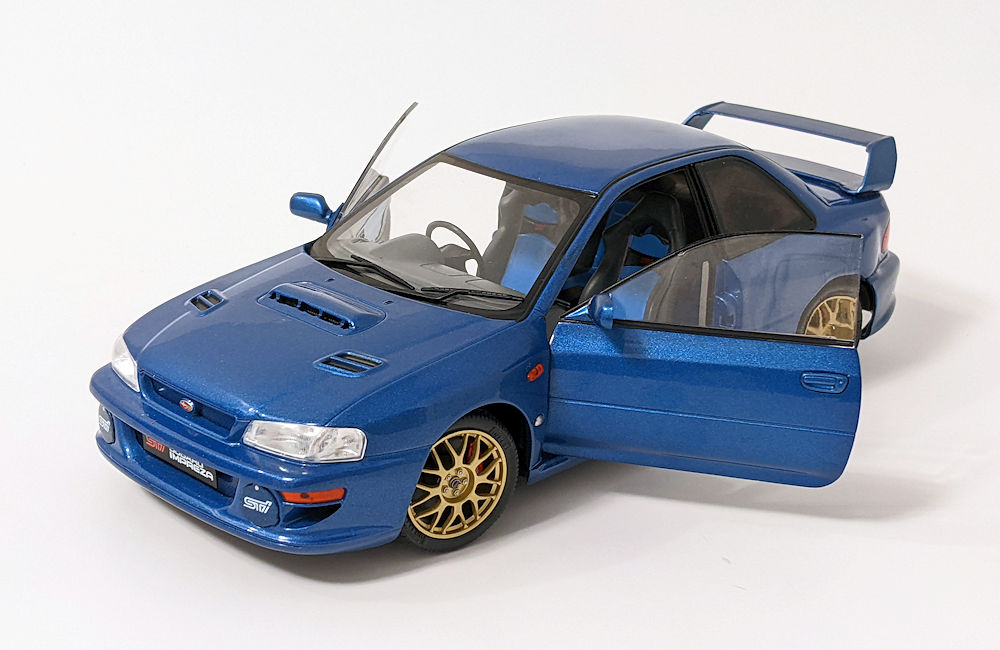 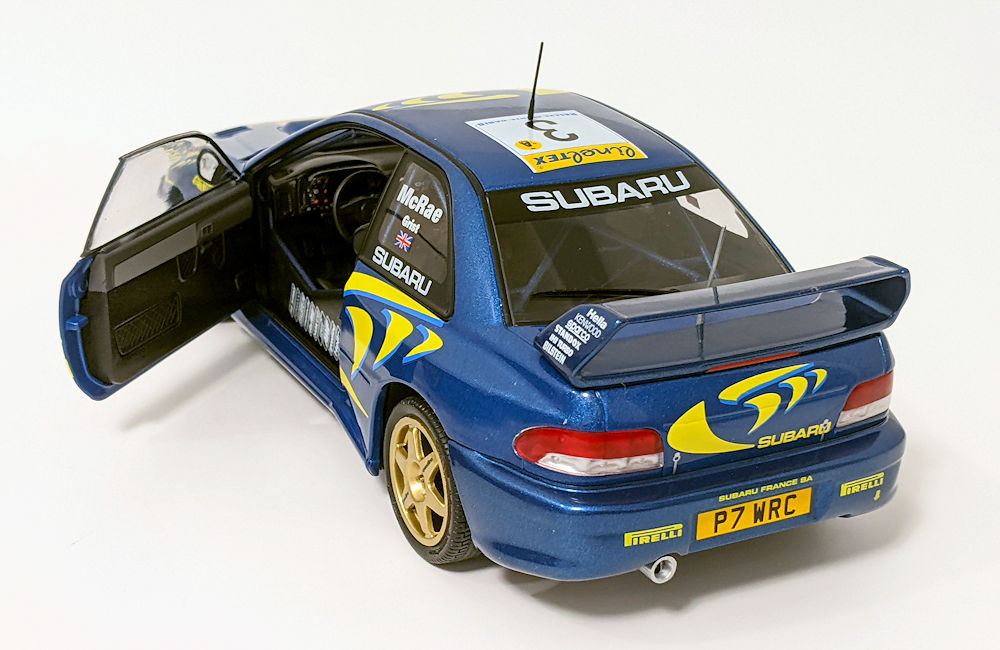 Moving onto the side, you can’t help but notice the turning signal that is not levelled on both models. However, I can appreciate them being made of separate orange plastic pieces. Everything else on the side looks good and it is worth mentioning both come with different mirrors. Street version blue mirrors on the street example and smaller black aerodynamic ones on the WRC are true to the original. Both models have side windows on the doors which will keep the interiors dust free for all the collectors that display their models out in the open. The fuel door opening is only painted on and does not show depth, however, door shut lines are good and consistent on both models.

Moving onto the rims, both models come with different styles of gold rims which are correct for both versions. Tire thread and Pirelli P-Zero tire branding complete the wheel and tire package. I do like the red brake calipers with a white Subaru script present – definitely nice attention to those little things that make a model a little more special. 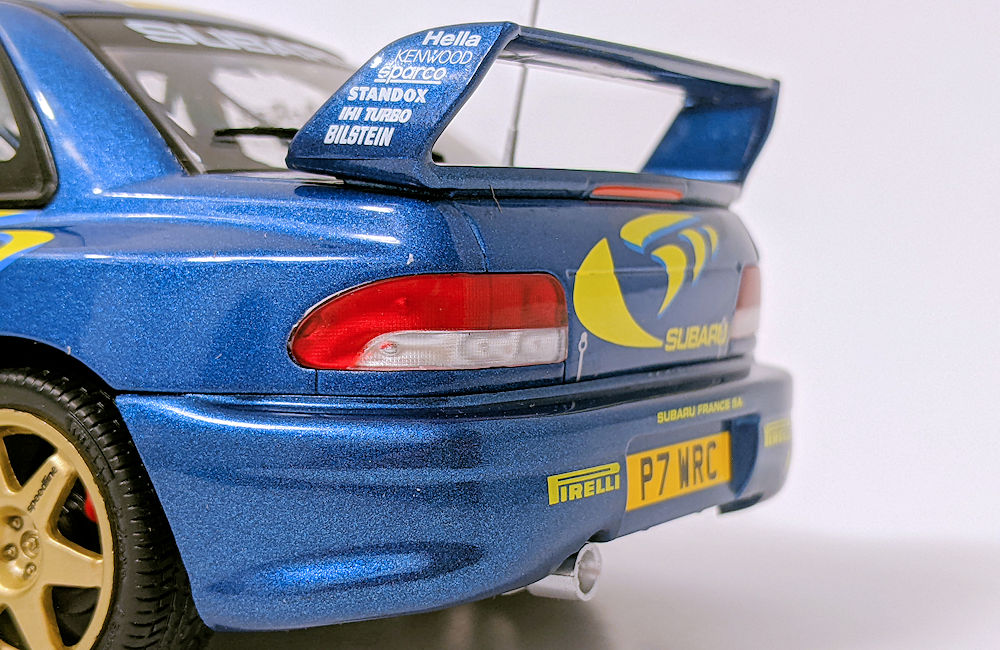 At the back, both models scream STI with the high-mounted rear wing. Hella, Kenwood, Sparco, Standox, Ihi Turbo and Bilstein sponsorships are present on the rally version in a form of a decal. I do like the choice of license plates on Solido models and these two do not disappoint either with “22B” for the road and “P7 WRC” on the rally version. Again, sponsorship decals complete the racing version and “22B STi Subaru Impreza” the other. The exhaust has very good depth to it and a splash of black paint on the inside is a nice touch. A rear window wiper completes the rear of both models. 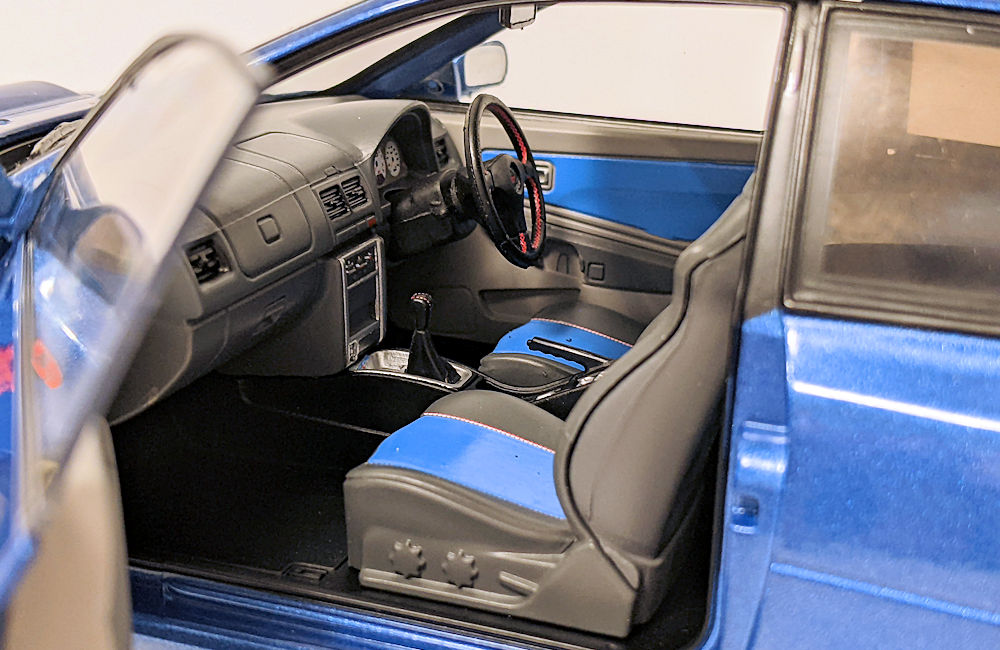 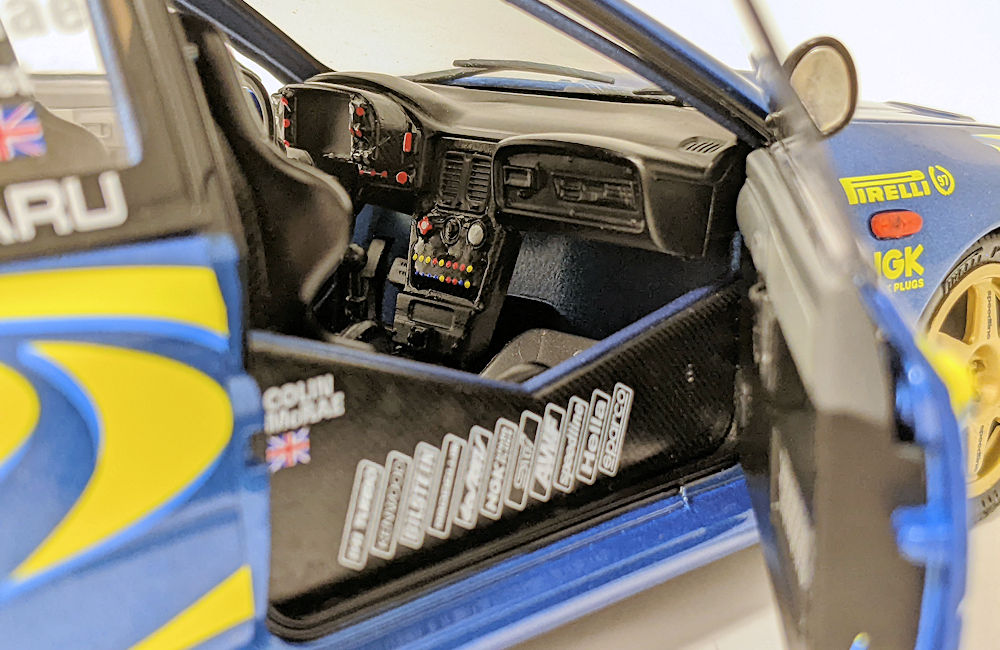 Inside, both models are home sweet home! As soon as you open the door, the rally version welcomes us with replicated carbon with all the sponsorship decals, the driver’s name (Colin McRae), his flag (in case you forgot he was British), and lots of colourful buttons present on the dashboard too. A splash of colour on any black interior is most welcome and Solido did well here. A blue roll cage completes the interior. How about the street version you may ask? Well, its nicely done too with a splash of blue, STI logo and STI colour stitching on the seats, again the same shade of stitching on the steering wheel, blue accents on the inside of the door trims, a splash of silver paint on some buttons and around the gear lever, white gauges, and buttons to the right of the steering wheel are labelled in white too. Let us not forget that this is a budget model – I have to say “Solido…well done!” 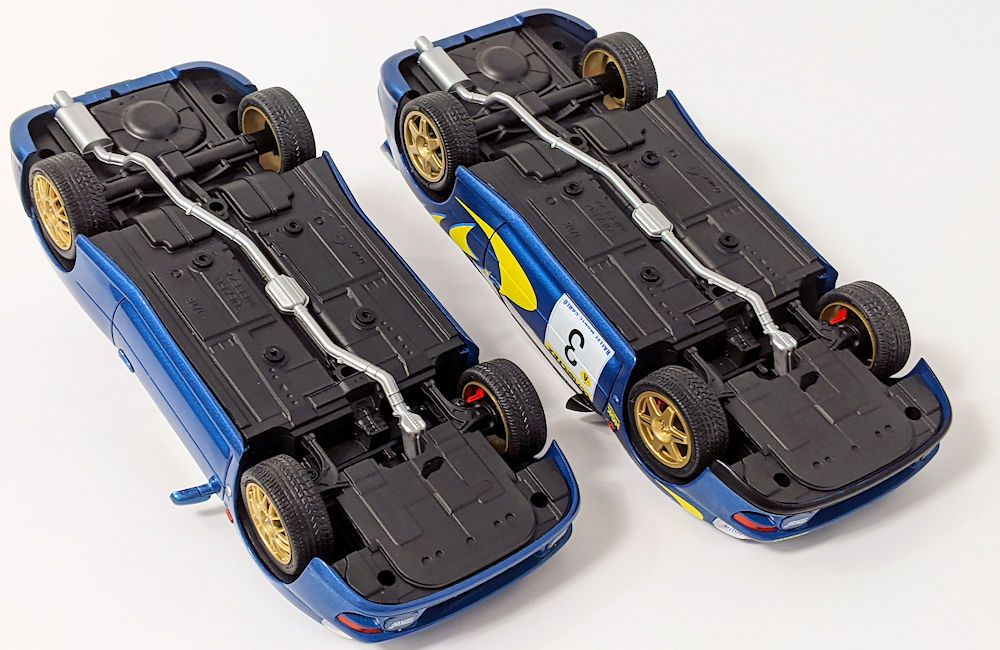 To sum things up, l think both models are winners here. This is a huge improvement over the Supra which I reviewed earlier. I am glad Solido is able to make a really decent model without breaking the bank. I think the models are well done and display together very well. I recommend buying both and displaying them side by side. If you are not convinced, take a look at the pictures! Once again, a credit to Solido for a job well done!