I seldom rant about the models I review, but the number of defects I’ve observed with this new arrival beats anything I’ve encountered in the past few years. I was excited to receive the newest variant of the Auto World nee Ertl American Muscle casting, now with some newly tooled components such as the Rally Sport grille featuring hidden headlights, and RS-specific lower body chrome mouldings and rear valance panel, among others. 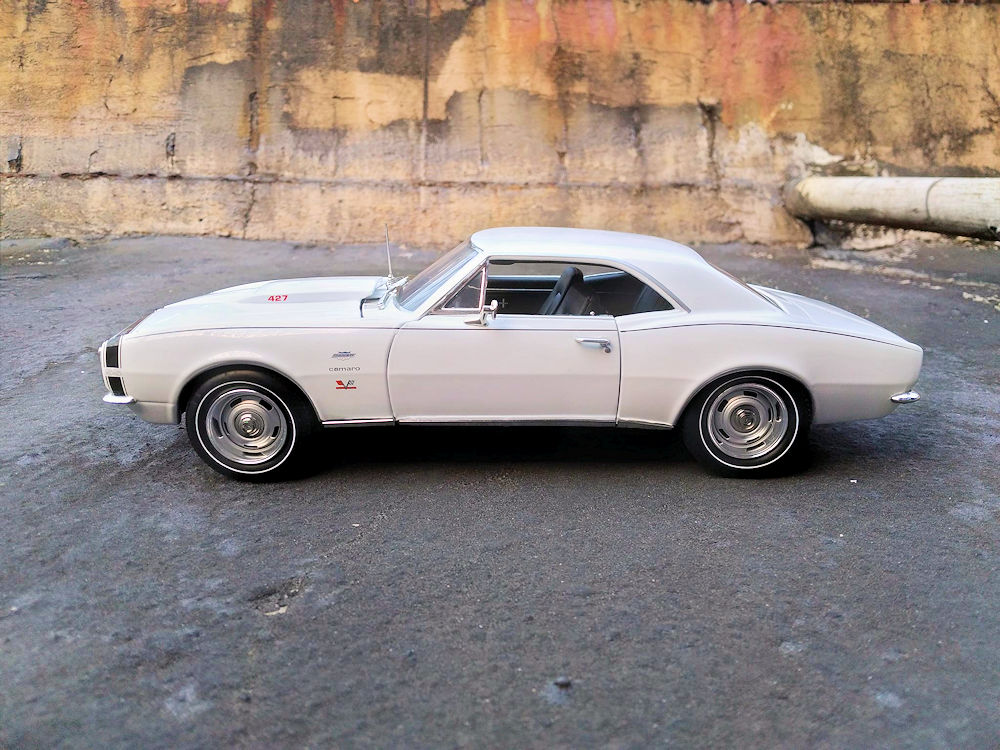 After all, this Ermine White Yenko variant is the first-ever Rally Sport in the American Muscle range of 1:18 scale ’67 Camaros.  As soon as I removed the model from the packaging, both the tie rod and the driveshaft detached themselves. While reattaching those pieces was straightforward, I was shocked to discover that this particular unit had a tie rod that was a bit too long, so the front suspension geometry is now in a state of perpetual excessive toe-in. The driveshaft smoothly rotates, but the driver’s side rear wheel wobbles miserably when the model coasts on the worktable. Trying to “align” the offending wheel may actually result in breaking it off, so I guess I’ll have to live with what is the worst case of off-balanced, crooked drive wheels in modern history.

The Ermine White paint has less from-the-factory orange peel than earlier Auto World 1967 Camaros, but even after a careful application of Liquid Lustre automotive carnauba wax there are some darker areas on the doors. 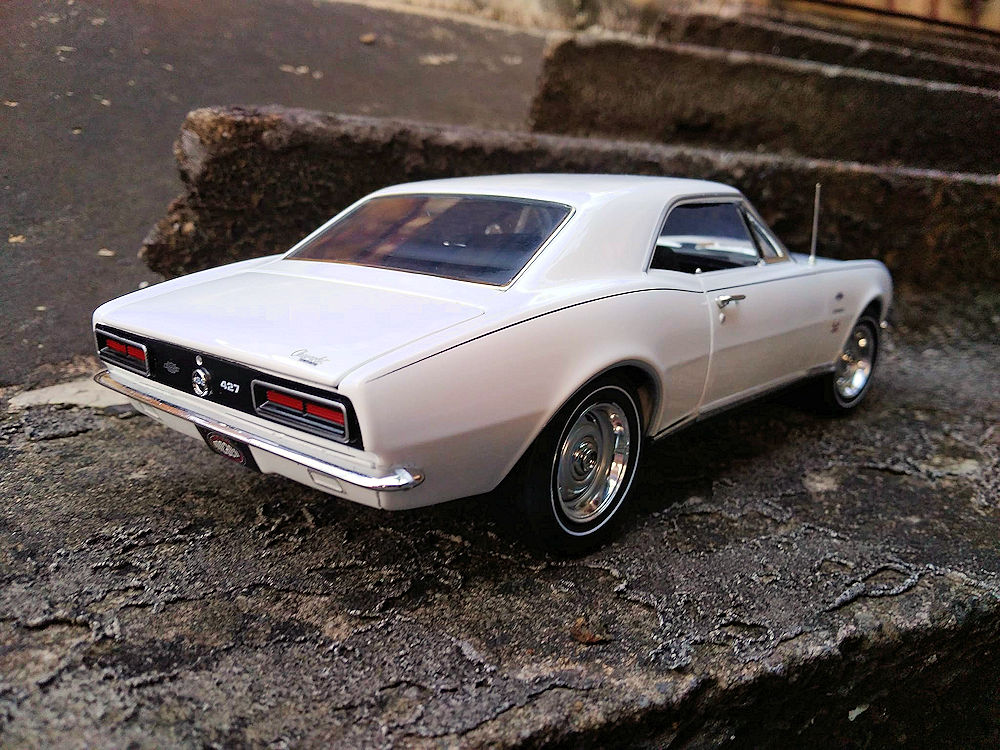 Both the hood and trunk lid do not sit properly in their “closed” positions. There are visible gaps that cannot be addressed without having to completely disassemble the model, and yet if the gaps are minimized there’s always the danger of chipping the paint when the panels meet at the shut lines.  Opening the hood reveals an air cleaner which is not only mounted in a crooked manner, but the “427 Turbo Jet V8” decal is off-center.

The newly-cast RS grille was obviously an all-chrome piece with the black areas masked and spray-painted… Carelessly. I had to repaint the entire grille because chrome spots were peeking through the black areas, and the chrome surrounds were not properly defined, so a steady hand was needed to make the necessary pass with the ultra-fine tip of the Molotow Chrome Pen. 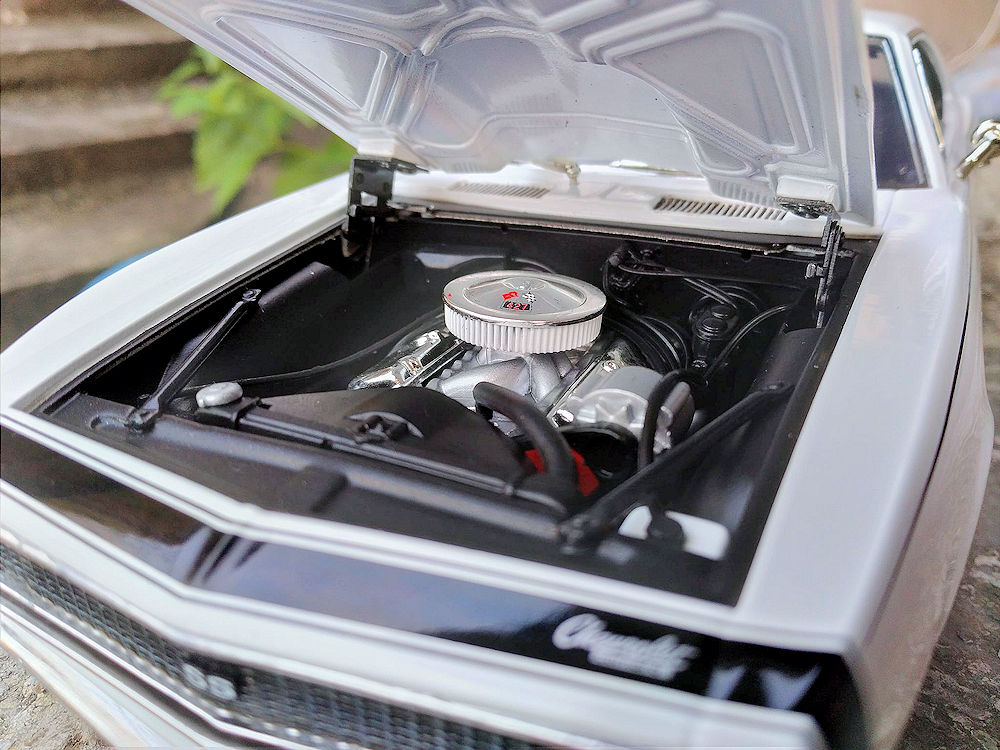 The chrome on the front and rear bumpers showed pitting at the extreme edges, and the Molotow Chrome Pen couldn’t fix that, so I had to slice some extremely thin strips of Bare Metal Ultra Bright chrome foil and apply them to conceal the unintended “parking lot dings”.

The all-new RS-specific rocker panel mouldings also had so much flash and residue on them that they looked like they were twisted off the sprues and haphazardly fitted to the model, something only a nine-year-old would be inclined to do. I had to carefully trim the mouldings with an extra-sharp hobby knife, followed by a little “paint concealment” to hide the offending areas. This is totally unacceptable for a model miniature in this price range. 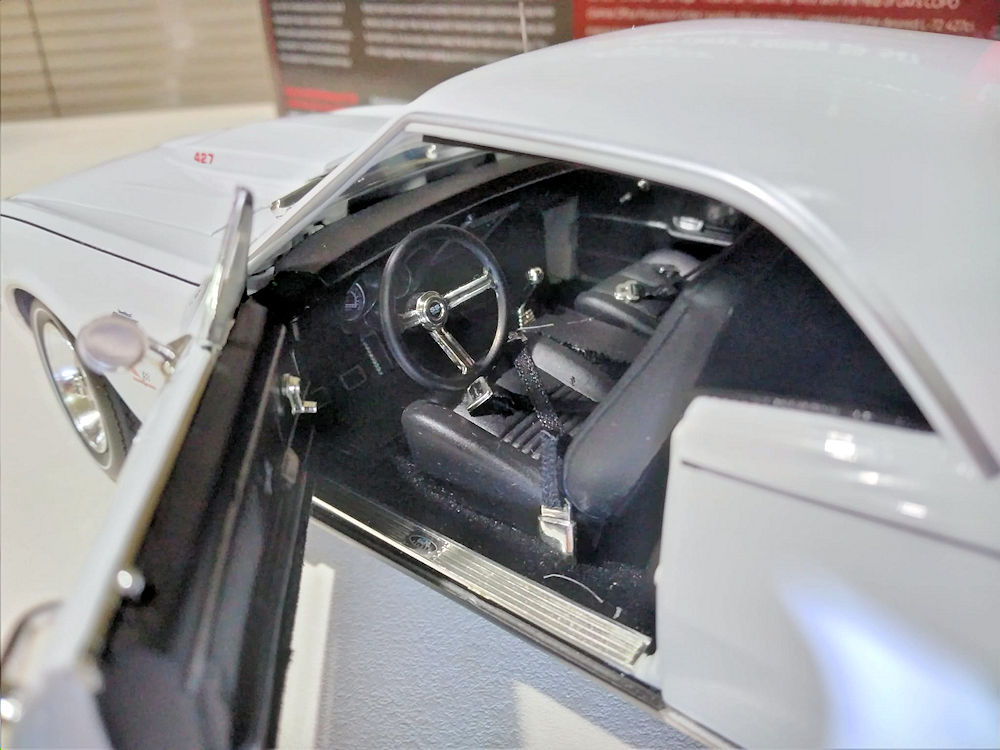 Opening the doors shows the interior whose dashboard had a small blotch on top, evidently a moulding error. The dashboard itself was mounted lower than it should have been, and the large gap from the lower portion of the windshield to where it meets the dashboard shows how messed up this abominable model was put together. As a result, the steering wheel is practically resting on the driver’s seat, and to make matters worse, the seatbelt buckle has come in contact with the steering wheel.  Opening the trunk lid would have been the only area left to examine, and upon doing so the stick-on warning label for the Positraction limited-slip differential came off.

This particular unit, #0384 of an undetermined, undisclosed number produced, was bought new from a U.S.-based seller, and it was factory-sealed when it was delivered to me. All defects and issues, therefore, were the result of the worst case of build, paint, finishing and quality control oversights that I have come across since I started collecting the Auto World (formerly Ertl) American Muscle 1967 Camaro casting since around 2007 when it was first released. 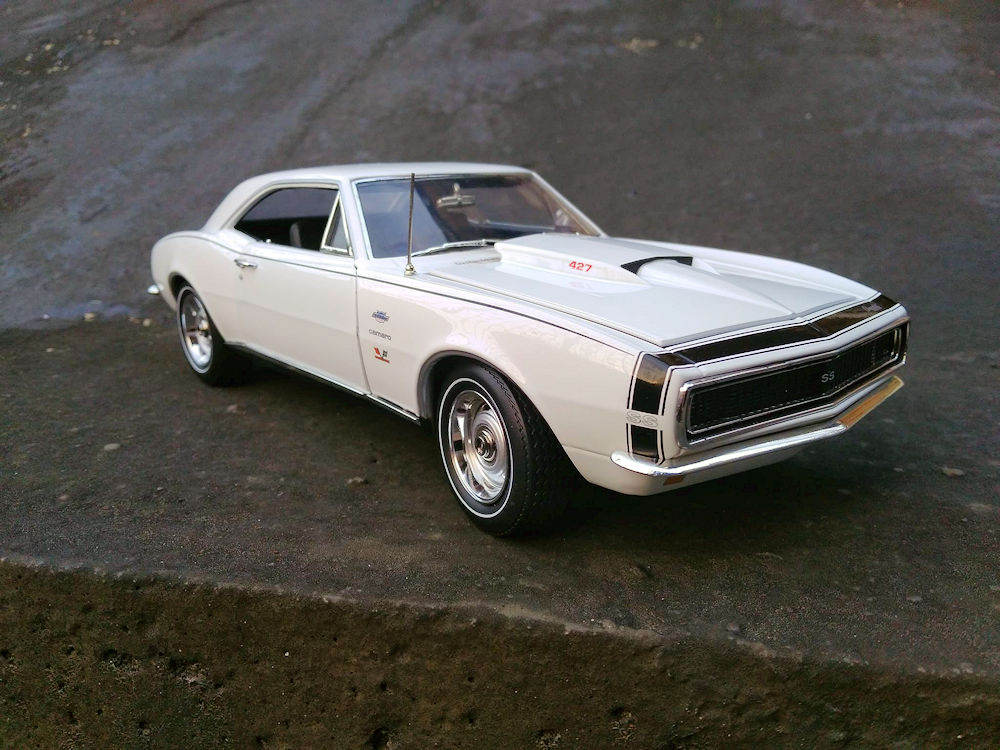 Sadly, I cannot return this model because of the obvious distance and cost constraints that come with being based in the Republic of the Philippines. Frankly speaking, I’m so disgusted with this model (which actually looks a lot better now… the photos were taken after the countless repairs, detail corrections and other rectifications, but it’s obvious some issues are beyond hope) that I want to toss it in the nearest garbage receptacle, but because it cost me a considerably large amount of money to acquire, I’ll just keep it in the darker, less-viewed portion of my Camaro display.

I hope this post reaches Auto World, and the company does something decisive about its quality control policies, which appear to have gone the way of the dinosaur.  Until this very serious matter is addressed, I’m not buying another Auto World product.