Today I have something Japanese for all the JDM car enthusiasts out there. I remember when the MK4 Toyota Supra came out in the 1990s. It looked out of this world in magazine photographs, so I rushed to a Toyota dealer to see it in person. It was a looker, with its high-mounted wing which was often duplicated by tuners around the world. It seemed every tuner car in the 90s needed a Supra rear wing! I remember seeing two-door cars, four-door cars, and even minivans with those wings. Toyota definitely created a trend! The MK4 Supra was a bold direction for Toyota and we have to thank the chief engineer Isao Tsuzuki for all his efforts in creating an unforgettable icon. I have seen a few on the road recently and I must admit that even almost 30 years later, the car looks fantastic. It still has the road presence now as it did when it first came out. 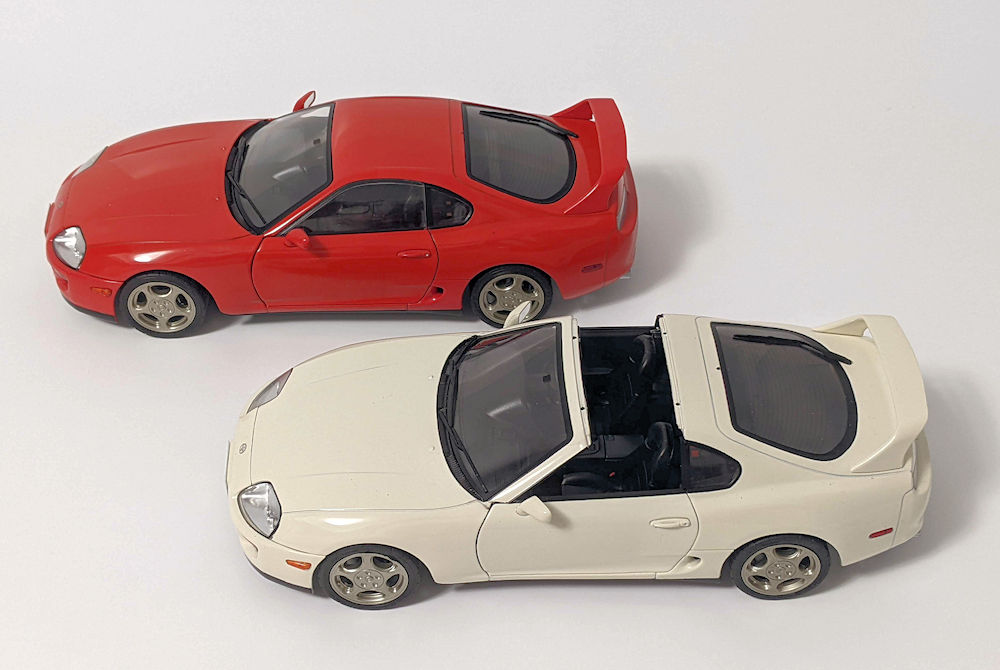 In the past, Kyosho gave us a die-cast fully opening MK4 Supra, and then years later Ottomobile made a resin example with a closed body shell. Today, Solido is giving us something in between – a die-cast model with opening doors and a Targa rooftop. It is worth mentioning that a red hardtop is also available by Solido. However today I will focus on the Targa version as this is the one I was waiting for.

Packaged in the usual Solido box with see-through plastic, the Targa top comes separately and is mounted at the back wall of the box. Although a good idea, mine came out of the plastic compartment and was loose in the box. I feel Solido should have used a better glue to keep it from detaching and flying inside the box. Thankfully for me, it did not cause any damage to my model most likely as it is a plastic piece. Looking at it still in the box, you feel like you made a good purchase. How does it stack up on closer inspection? Let’s take it out of the box and have a look. 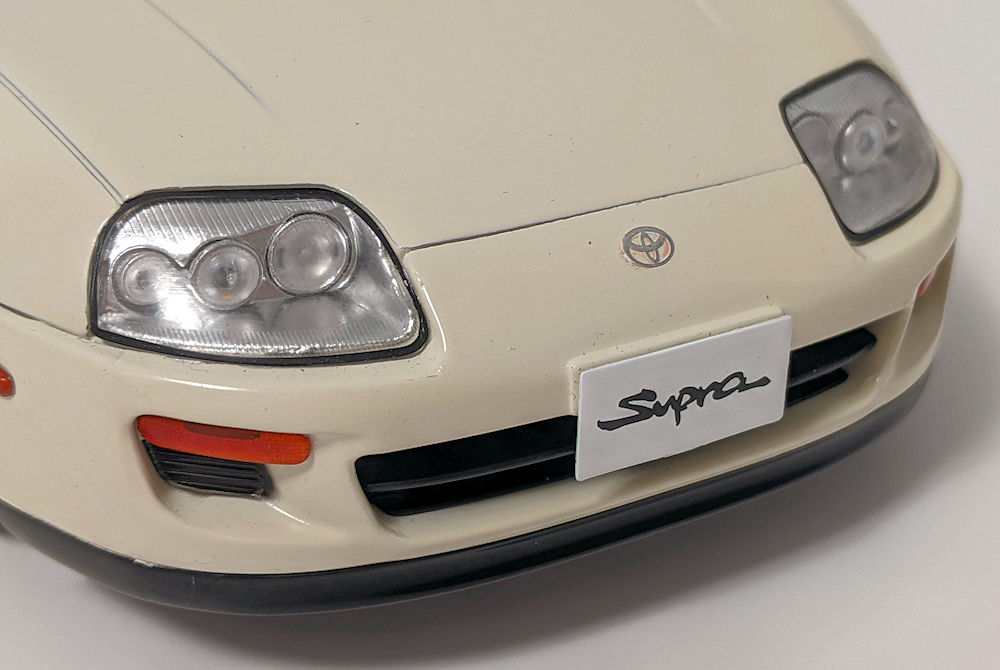 The white paint is well applied all over with no complaints. I do like the ability to display the model with the Targa top off as it enables me to see more of the interior bits that the usual hardtop version would. Let’s move on to the front. Although at first glance it looks good, with closer inspection you notice some inaccuracies. First, the turning signals inside the front bumper are made out of orange separate plastic pieces which are a nice touch but are longer compared to the real car. A quick search on the web shows either a much shorter orange turning signal or a slightly shorter one with both a clear and orange colour scheme. Whichever version this car was based on, it is slightly inaccurate. Looking at the headlight shape and design, I feel the inside of the clear lens cover should be angled and not straight as it appears on the model. Are those minor inaccuracies? I guess it depends on which angle you will display your model. The Toyota badge in the front bumper is painted on and shows depth – no complaints here. 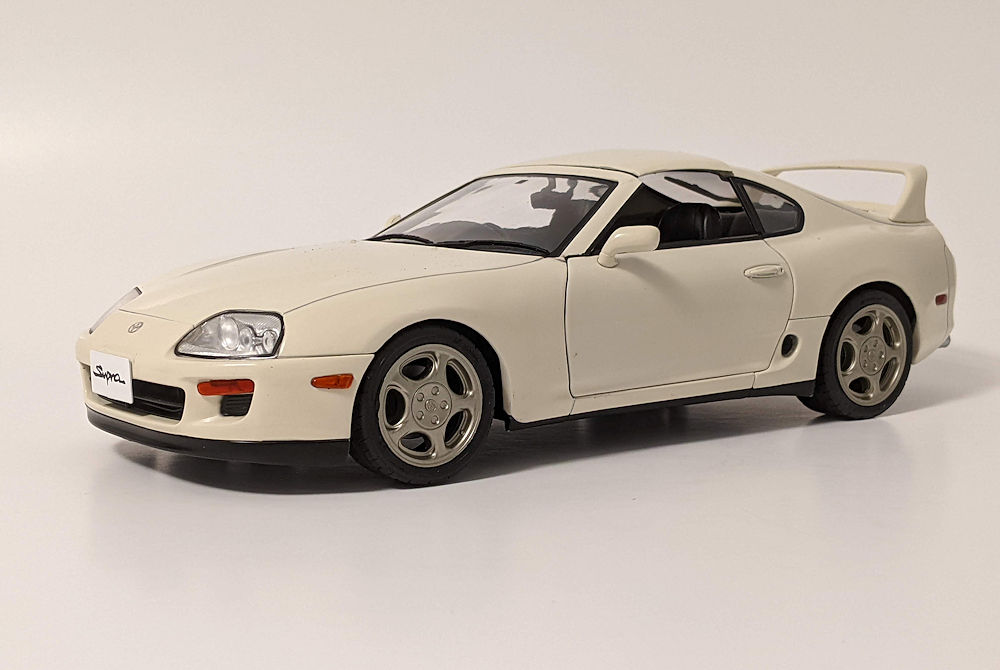 Moving onto the side – I think it looks great with some nice detail with side reflectors on both front and back being separate plastic coloured pieces. Door handles and mirrors are nicely replicated too. Door windows are not preset and that is a good thing as without the Targa roof on, the model looks better with windows down. Door shut lines are good as well for a budget model. Well done Solido!

Moving onto the tires – it is nice to see Yokohama tire branding moulded into the rubber – this is much nicer than a simple painted-on script. I give Solido a lot of credit here, as many manufacturers do absolutely nothing here or just paint something on. The tire tread is present too. Rims are acceptable and look on par with other budget brands. 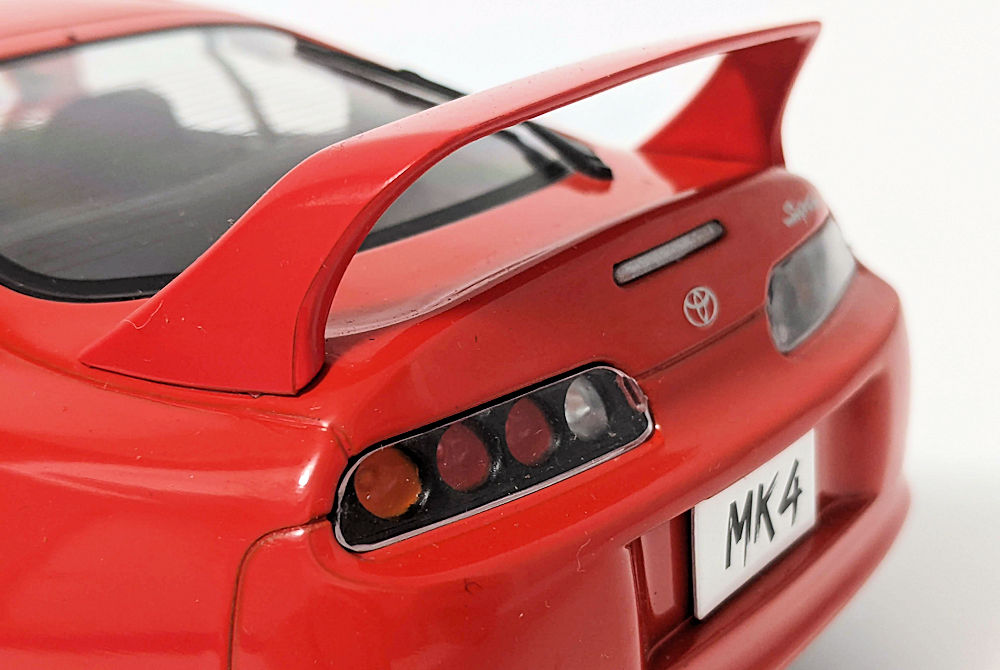 Let’s move on to the back. It is impossible to miss that wing – oh the Supra wing! Absolutely love it! I am glad Solido included the wing as it would not be the same without it. To me, this wing will always remind me of the MK4 Supra – it is absolutely unmistakable. The rear window wiper and window defogger are present and the window washer nozzle is present too (painted in black with showing depth). Toyota and Supra scripts are present and the Toyota emblem is there too. The back lights look good and I do like the MK4 license plate to remind everyone which generation of Supra this model is. The inside of the exhaust tip shows depth and is painted in black. This is definitely a good effort by team Solido. 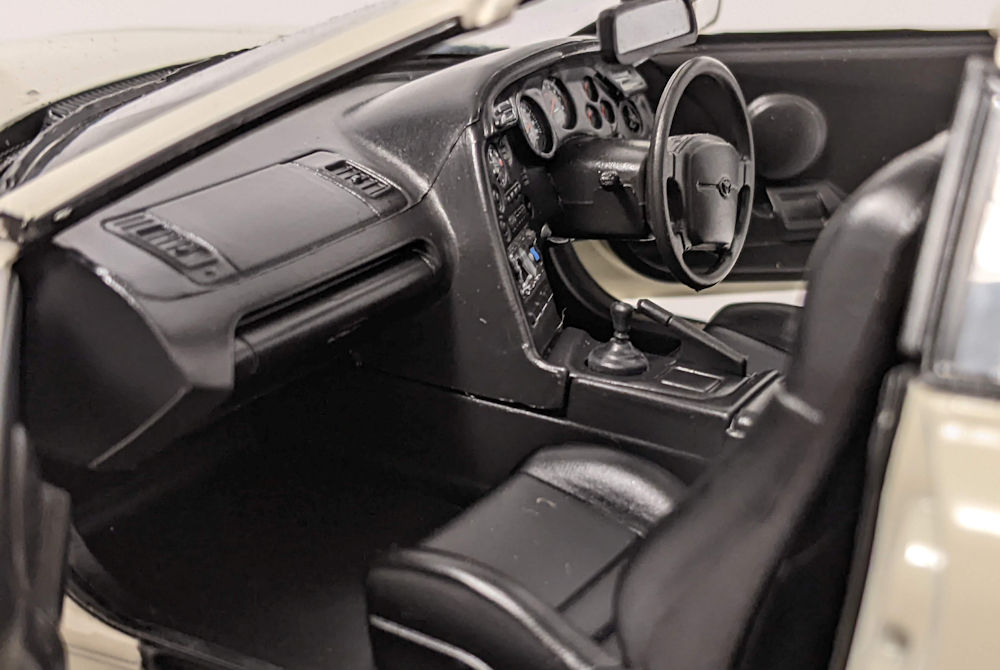 Moving to the inside, it is mostly black. Seatbelt buckles are pretty much the only splash of red colour you will find, other than decals to replicate gauges and another decal on the center dash. I personally prefer lighter interiors or interiors with some more colour but I am not sure what the interior colour specs were available around the world. As this is a budget model, I think the interior is fair-finished in plastic without any presence of textured surfaces or bits. 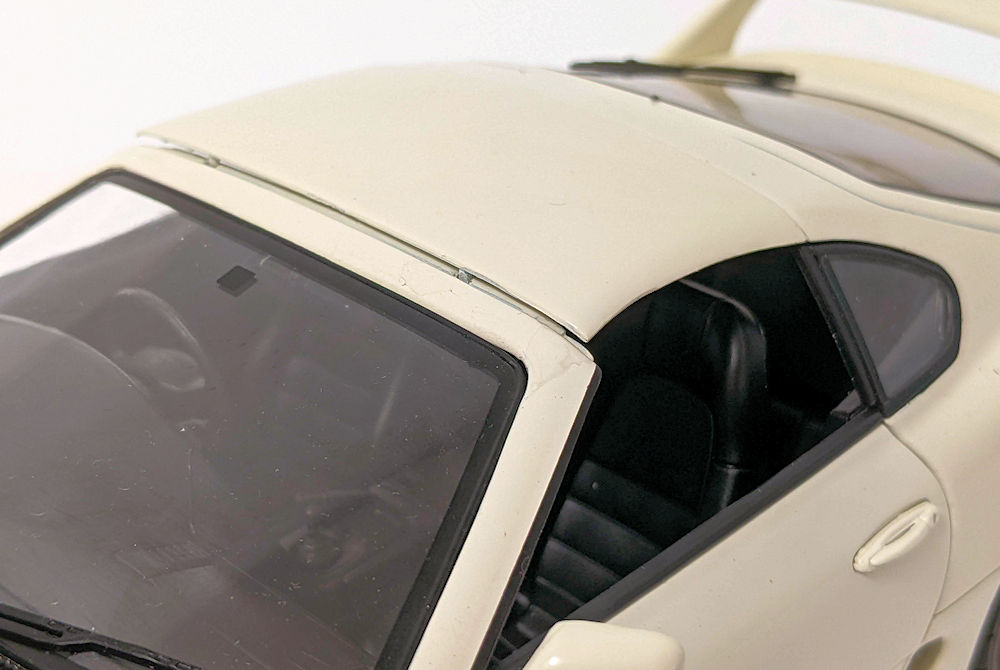 Next, I would like to talk about the Targa roof. I do like the model with the Targa roof off and would display the model without it. It would be nice to have a 1/18 scale dolly for the roof to rest on beside the car. If you choose to display it with a Targa top on, I would like to point out that the fit is not exactly on point and it does not stay perfectly flush. It is also worth mentioning that at the front it does not align with the a-pillar – it is a little too narrow. I think it is best to display this model with the roof off, to be honest.

To sum things up, l think there are pros and cons to this model. In my opinion, this Targa version is best displayed with the roof off.  If you prefer to display with the roof on, I would recommend the red closed version.   With that said, happy collecting everyone!