Welly is a great go-to budget 1:18 diecast manufacturer for many, myself included. For good reason, of course. Reasonably priced models and solid price-quality have made Welly an undeniable success in the diecast world. My trust in Welly was cemented through the purchases of a Bentley Continental Supersports and Pagani Huayra from their higher-end subsidy, GTautos, so Welly was my first stop when I set out to find a reasonably priced Porsche 918 in 1:18 scale.

After some online looking around, my search came down to a $200 Minichamps or a $75 Welly. While $75 is a bit pricey for a regular Welly model, I figured I’d pull the trigger because the 880+ horsepower 918 is hard to come by in the world of model cars. I will admit that the initial purchase left me thinking will this Welly model be worth that price tag? 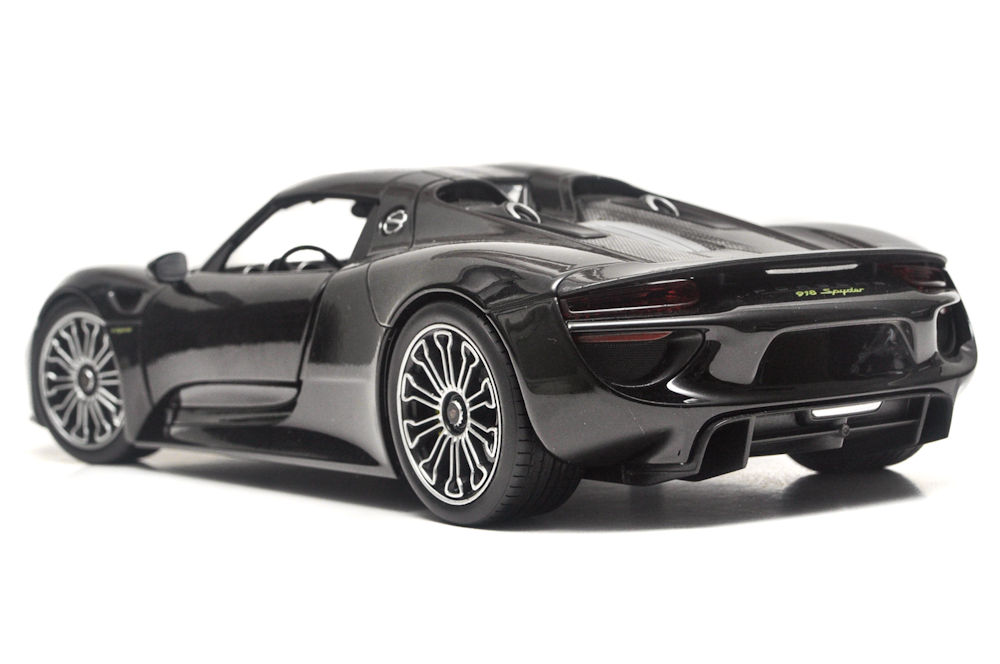 F​or the $75 (plus $15-ish for international shipping, as it came from France) spent, I set my expectations properly as this price point rides the fine line between a toy and a collectors’ model. I was pleased to find the 918’s packaging nicely done and actually what you’d find in the $100+ price range. I like to save the packaging so it was disappointing to have it arrive a little beat up. This was because of its multi-thousand-mile journey from France. Due to limited supply options, I had to purchase the 918 from Selection RS rather than a U.S.-based supplier. 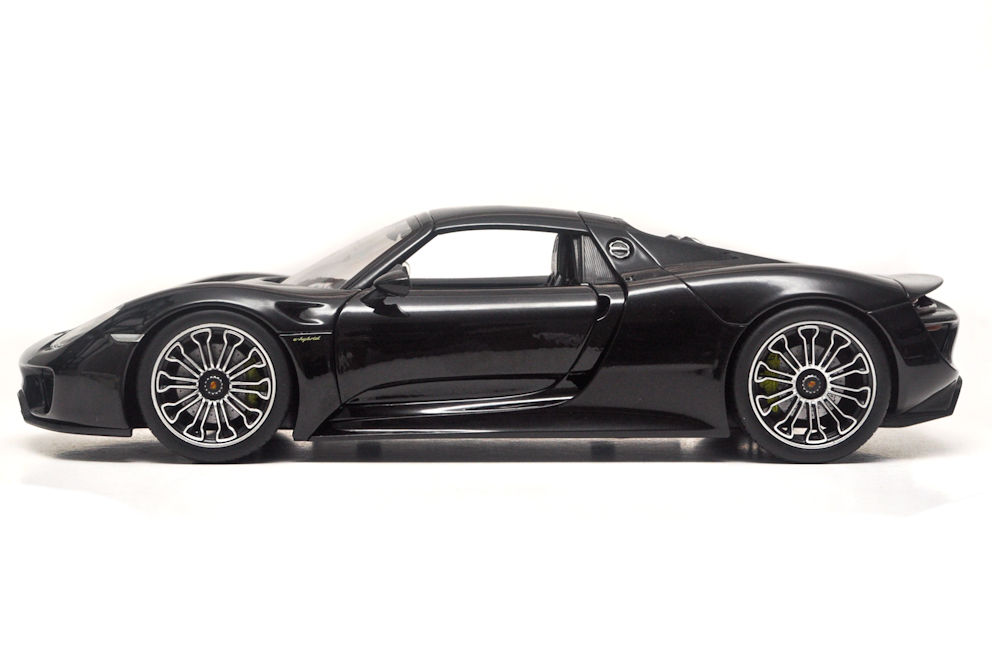 The car itself is a nice, solid reproduction but nothing out of this world. While only the doors open, I don’t fault Welly for this limited design. Allowing the hood to open means having to reproduce engine detail and that drives up the production cost and the end price to us. For the $75 price, I also received Welly’s typical poorly recreated vents and a poorly formed rear panel that didn’t dry correctly in the mould portion of its manufacturing. I considered returning the 918 due to the misshaped real panel but didn’t want to wait another month for a replacement to arrive from France, so it is what it is. 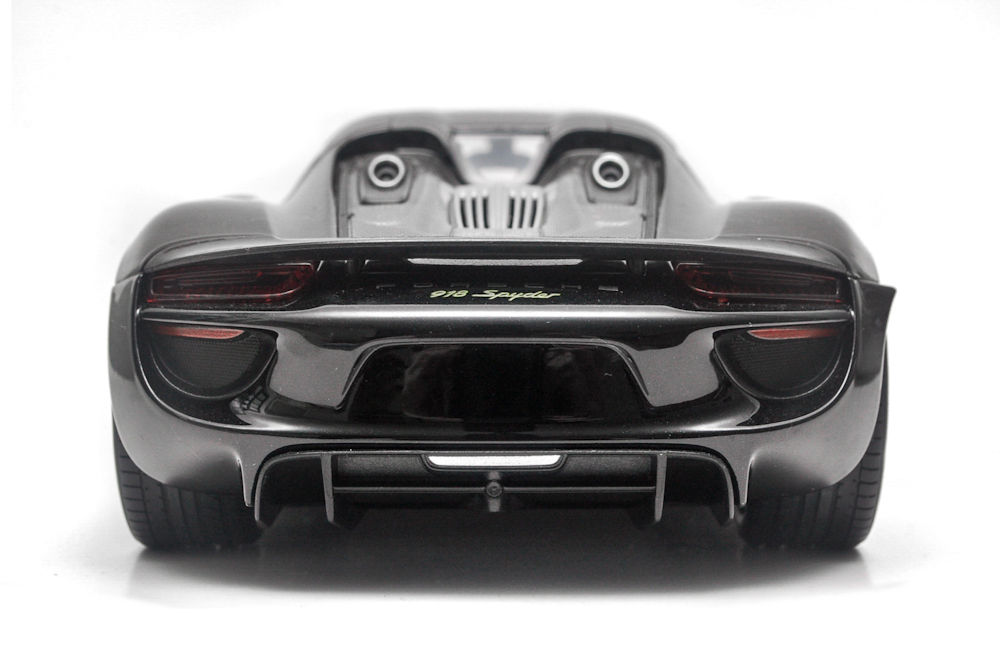 If I forget about the rear bumper panel issue and consider the two-digit spend, I think Welly did a reasonable job on the exterior. Starting off on the nose, the carbon fibre trim that covers the front spoiler is well made with a visible weave pattern. The headlights are more realistic than many cars at this price, they don’t feel like inexpensive plastic and are tightly in place. Lower down are the wheels which are my favourite part of the exterior. This model wears the 918 Concept rims with center lock caps. It also has Porsche Ceramic Composite Brakes (PCCB), a standard feature in every Porsche from the 911 Carrera GTS and up. My 918, however, has Acid Green PCCBs to match the colour theme found inside and out and further set it apart from other Porsches with yellow PCCBs. 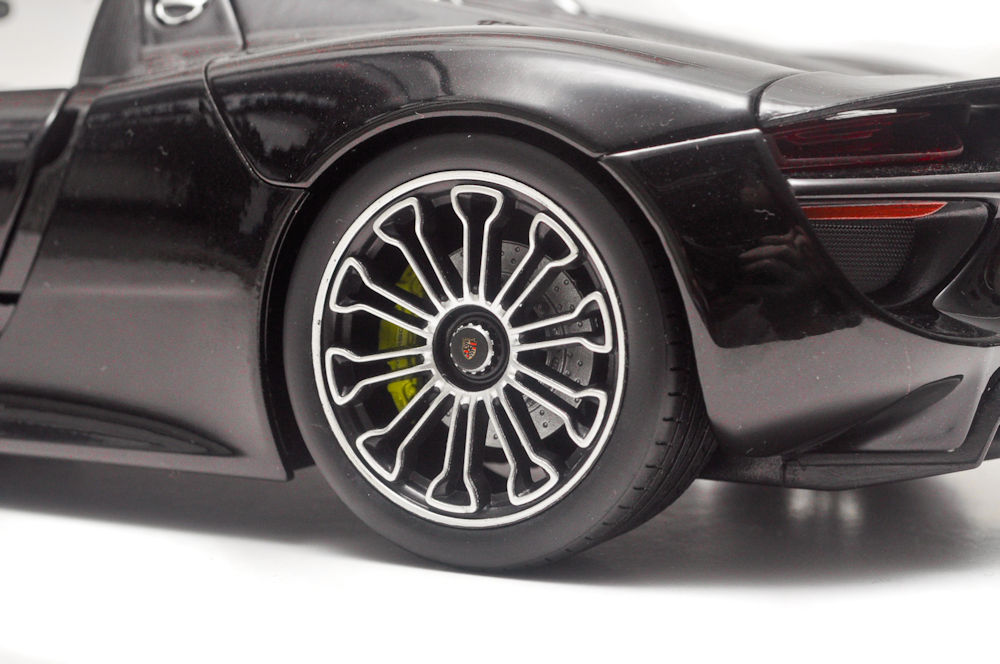 As you move along to the rear, the first thing you’ll notice is the “918 Spyder” text in bright green. Fun fact: while this car uses the “Spyder” name, it is actually a Targa top. Most people favour a full-on convertible rather than a Targa top, so Porsche likely used that name for marketing purposes.

On this Welly reproduction, the 918 and Porsche text are done via stickers. It makes me sad to say the Porsche text is curved downwards starting with the “s’.” Lame, Welly. I know I shouldn’t complain too much because of the $75 price but, man, the spoiler doesn’t move. That is highly unfortunate because we all know how cool the 918 looks with it up. My final complaint on the exterior is the cheap look of exhaust pipes, something I always hate. Overall, the exterior isn’t as good as it could have been but is reasonable at this price. 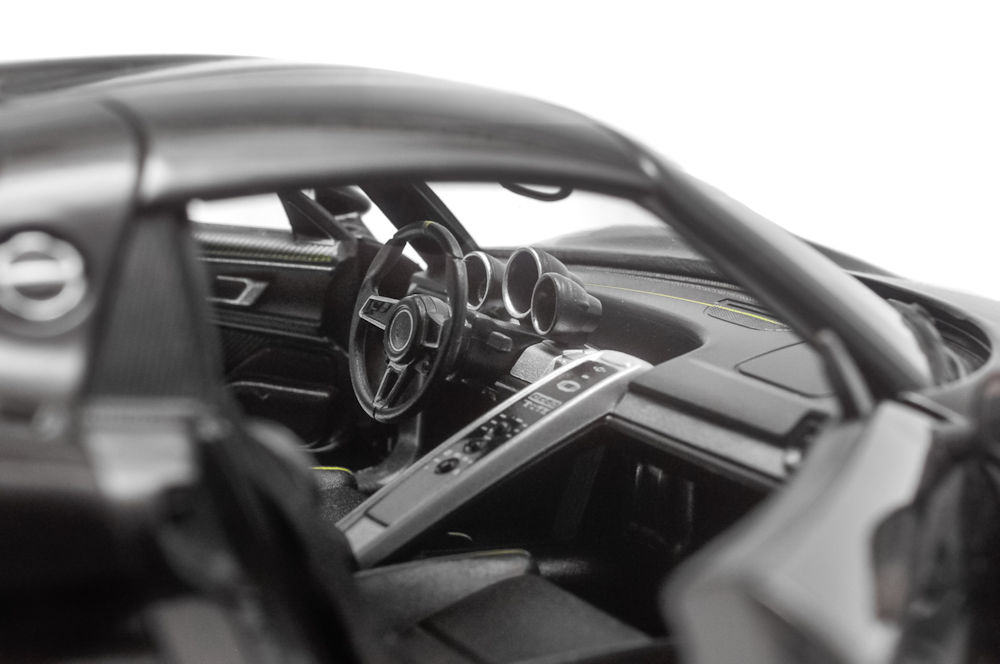 The exterior was a mix of good and bad but the interior is better. The Acid Green trim brings the otherwise colourless interior to life. Beginning with the door panel, we can see it’s all carbon fibre. The weave pattern is visible on the exterior and looks stellar with a stripe of Acid Green across it. The door handles have also been made well. Unfortunately, though there were, unfortunately, specs of dried black paint on the silver handle. The silver-outlined decal gauges are legible enough to read and contrast the rest of the black plastic. But I wish the fuel gauge decal hadn’t been applied off-center.. My last OCD-oriented comment is about the steering wheel which my eye found a bit too thin. I saw a plumper version of the steering wheel in various photos I’ve seen of the full-size counterpart.

The infotainment screen running down the space between the bucket seats is painted and labelled neatly. The buttons are a bit hard to read, but you can see that a level of effort was put into this part of the cabin. My last comment on the interior is a compliment: the seats are remade very well. The Porsche crest is embossed on the headrest, with “918 Spyder” written across it. 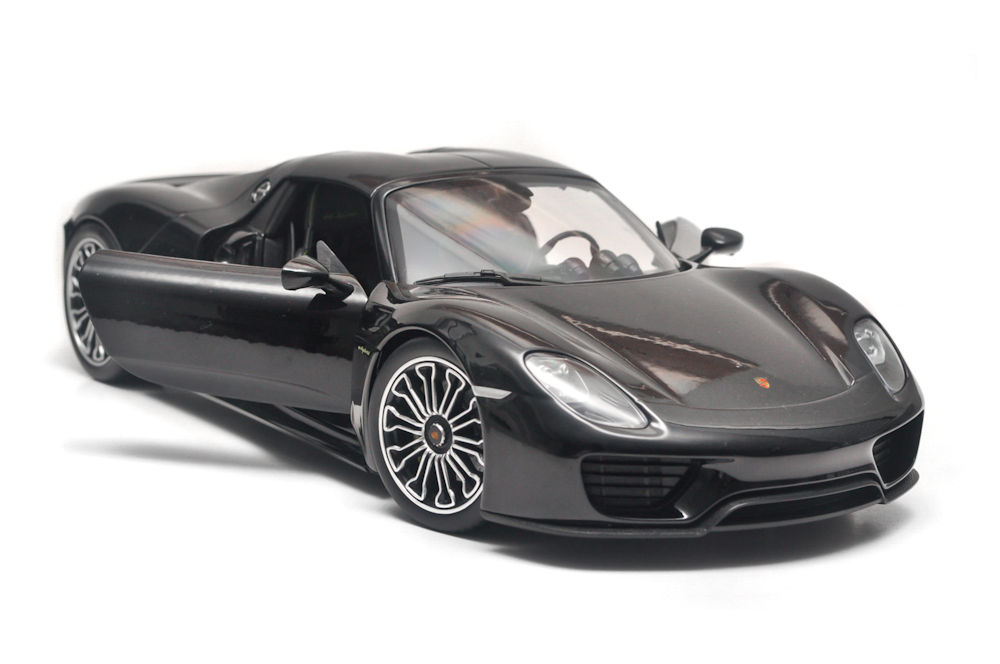 Welly’s Porsche 918 could have been a fantastic price-performance purchase. That is, if the manufacturer spent a bit more time on overall quality and attention to detail. As it is, the price is steep for a model without an opening hood or engine compartment. On a $75 1/18, the manufacturing issue on the rear panel and crooked decals, shouldn’t be present. And the international buying experience challenges left a bad taste in my mouth. However, I’m glad to own this car. Despite its flaws, the exterior and interior are replicated better than many other comparable diecast models. And, hey, it’s a member of the Trinity. Gotta love having all three at my house. If you want to add this to your collection, it’s still available in silver as a closed top like mine, but with limited supply left.