Amalgam officially announces a new addition to the 1:18 series, the latest addition is the sexy Ferrari 488 GTB.  The exterior is completed in Ferrari Rosso Corsa with Red interior.  The Ferrari 488 GTB is crafted in typical Amalgam care and affords all the details one would desire.  The exception is, the model is fully sealed with no access to internal bits.  Suggested retail $595US.

About the Ferrari 488 GTB…  “The 2015 Ferrari 488 is the marque’s first turbo-assisted mid-engined car since the seminal F40. It marks a change of direction in terms of its bodywork specifically; creating a staggering fifty percent increase in speed-generated downforce. Ferrari also claims quicker gear changes and a more sophisticated adaptive suspension. The engine is a very different beast too, being a smaller-than-usual 3.9-litre twin-turbocharged flat plane crank V8, which manages to be both more efficient and more effective with its 661 brake horsepower. It follows the lineage of the Ferrari F154 engine family. The car’s moniker is actually based on its engine performance, producing 488cc per cylinder. The 488 GTB is driven by a seven-speed dual-clutch transmission made for Ferrari by Getrag. It was named ‘The Supercar of the Year 2015’ by the renowned car magazine, Top Gear. ” 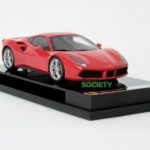 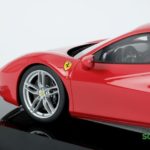 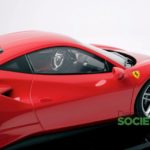