The latest is the 1:18 assortment of Amalgam replicas is the Ferrari 250 LM 24 hours of Le Mans 1965.  Based on the images, though taken from a long angle, which doesn’t reveal much detail, the model shape and execution looks pretty darn good.  Personally I love the blue pin-stripping around the wheels.  On the flip side the model is sealed and crafted in resin.  And the price isn’t cheap, $595US.  Though it comes with some fluff, attractive case, note pad, and unique carrying straps.  I say loose the fluff and develop a fulling opening model at this price point!  Amalgam you can have that advise for free!

About the 250 LM…  “The 1965 24 hours of Le Mans proved to be a comprehensive victory for Ferrari over the Ford GT40s and Porsches they were up against largely based on their strength and reliability. Ferrari had developed the mid-engined LM for the GT category at Le Mans but homologation was refused by the ‘Commission Sportive Internationale de la FIA’ so the cars were entered as ‘prototypes’ instead. These cars continue to be designated 250 LM because the first car built was fitted with a 3.0 litre engine, but the cars delivered to customers should according to the Ferrari system be called 275 LM because they were powered by a 3.3 litre engine with each cylinder displacing just under 275 ccs. Being a development of production engines, they were very reliable, the most important factor in giving them victory in 1965.” 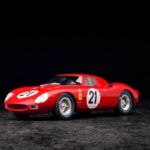 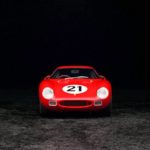 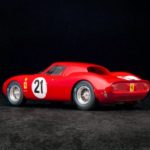 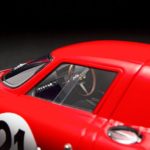 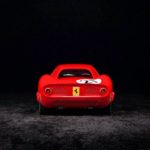 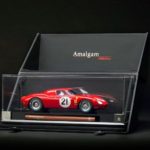 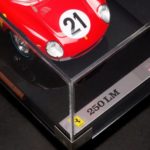 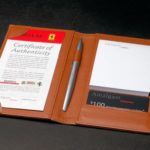 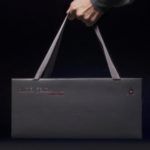