AutoCult is issuing a limited edition third party release of the Porsche 924 World Record Car in 1:43 scale.  Only 333 examples will be issued. Sale of the model will start next week.  Contact AutoCult for more information.

About the Porsche 924 WC car…  “In the mid of the 1970s, a conventional Porsche 924 was specially converted into a “record chaser” in order to get the attention of the global press.  After fine-tuning the four-cylinder turbo engine, the standard performance of 125 hp was increased to 240 horsepower. At the same time, it was possible to reduce the weight of originally 1,100 kg to 980 kg. The final component of the conversion was the car’s aerodynamic by reaching a drag coefficient of only 0,268. All modifications together should enable the car to reach the targeted top speed of 280 km/h.

The racecar was all set to attempt at the world record over 10,000 miles. The attempt was originally planned for July 1977, but this event fell through. The management of Porsche canceled the project even before the first mile was driven.  Instead of sending the car to the racetrack, it was put on display in the Porsche-Museum.” 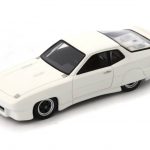 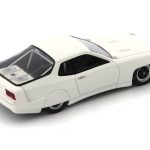 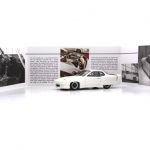