First Look at TrueScale Miniatures’ new 1:43 McLaren 675LT.  This new addition to the TSM 1:43 assortment will be offered in Silica White (as featured) and McLaren Orange.  Both are LHD.  Model is due in stores July 2015.

About the McLaren 675LT…  “Announced at the 2015 Geneva Motor Show, the 675LT is Lightweight evolution of the 650S and is powered by a variation of the M838T twin turbo V8 petrol engine, producing 675PS. The ‘675’ in the 675LT model name refers to the power output of 675 PS, following the naming scheme started by the McLaren 650S. The LT in the model name is a reference to the “Long Tail” 1997 McLaren F1 GT which was the final incarnation of the F1 road car built to comply with FIA homologation regulations for the 1997 F1 GTR. The 675LT makes use of single-piece carbon fiber monocell weighing 75 kg (165 lb), and carbon fiber use in the vehicle is increased in order to further minimize weight and increase rigidity” 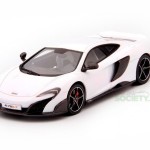 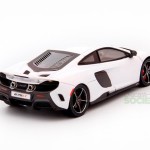 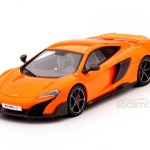 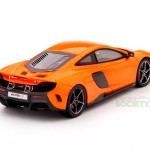