The Toyota Prius was “born electric”, too, and much earlier than the BMW i8. So what’s the merit of the Bimmer that it deserves to be replicated as a 1:18 model? Well, have you bought the Paudi 1/18 Prius? No? Why not? But you’re interested in the BMW i8! Because in contrast to the Prius, it’s stylish, sexy, sporty (even though it is no competition for the McLaren P1 performance-wise, of course), so that it gives you “Freude am Fahren” (BMW’s brand slogan, means “pleasure of driving”) and therefore makes electric mobility a lot more attractive to petrol heads – like you and me (collecting model cars is not exactly an environmentalist´s favourite pastime, is it?) . Whether the i8 keeps its promises is a different matter and we’ll leave that to motor journalists. So let’s get on with this review and look at Paragon’s 1:18 model. 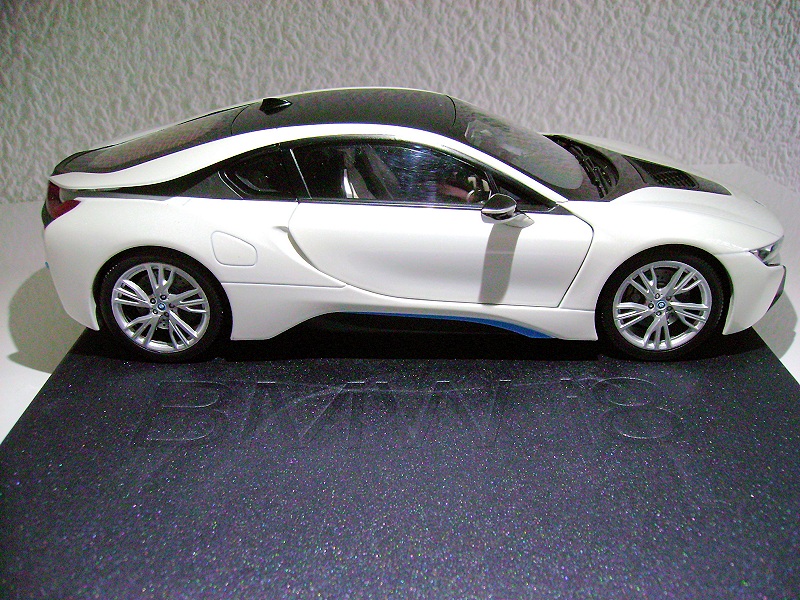 It is available in three different colors: Sophisto Grey, Protonic Blue and Crystal White. To my mind, white is the best choice. In (the very dark) grey, the i8 loses the contrast between the black bits like the roof, front and rear bumper accents and the bonnet’s centre scoop which accentuate its lines (particularly the roof line) so nicely. The blue admittedly is a really nice color , but not as accentuated as in white. On the real car (according to the brochure), the i8 usually gets its accentuating touches round the front kidney, on its sides and on the rear bumper in “BMW i blue” as standard, but only if the car’s main paint job is not blue. “Frozen Grey” is available as an alternative. On the “protonic blue” car, however, “BMW i blue” is not even available as an option and these details are in “frozen grey” instead. So, absolutely correctly, the blue i8 comes with rather inconspicuous “frozen grey” accents. 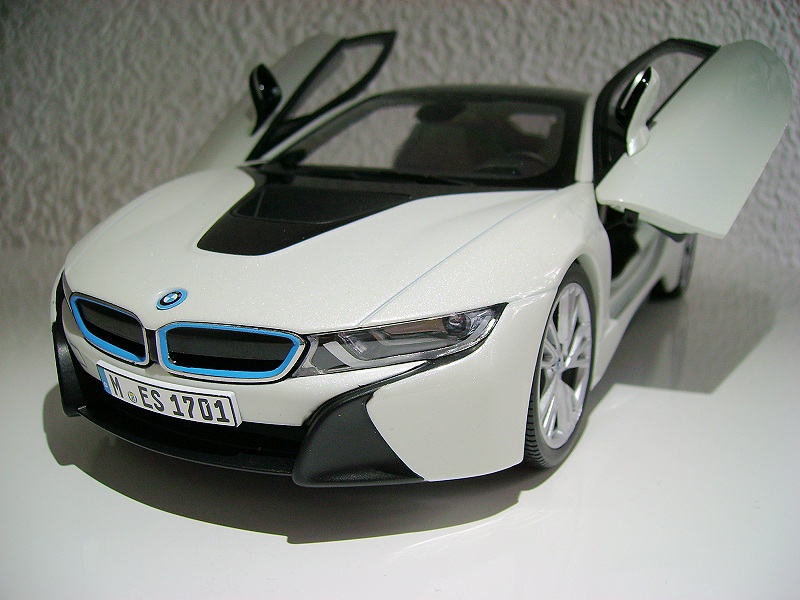 As I said, white underlines the well-replicated shape of the i8 and this often punishingly revealing bright color shows that the doors’ shut lines are absolutely unacceptable. That the other shut lines don’t pose a problem has its reason in the fact that nothing else does open on this model. This might be disappointing for engine fans, but isn’t any different for the proud owners of the real car who can only access the tiny trunk space. The propulsion units can only be accessed by BMW staff.

The lights on the model are quite okay, but don’t raise much enthusiasm. Depending on the angle, the printed on daytime running/indicator LED lights at the front can be sufficiently convincing, while the smaller rear lights underneath the main rears are a lot less so. The badges are replicated nicely. 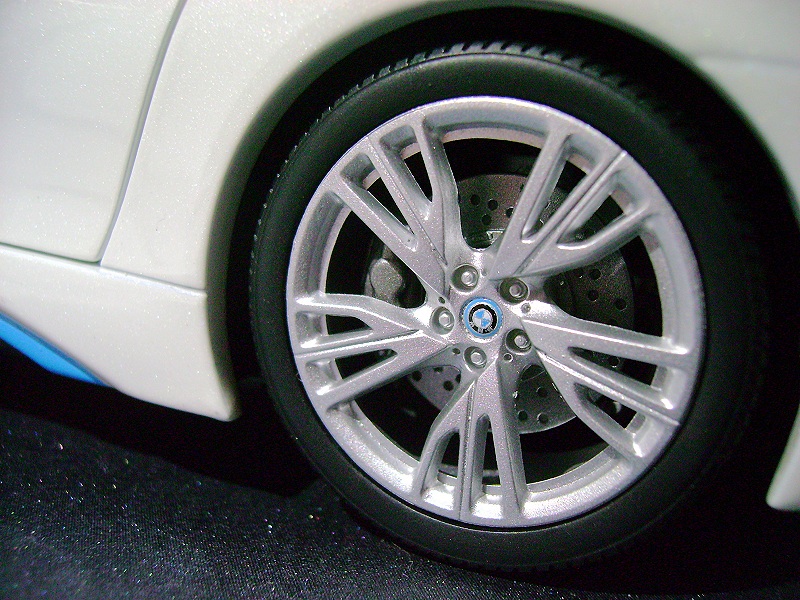 As for the wheels, Paragon have opted for the 20″ W-spoke-rims, not unsuccessfully, but at this budget price, in uni-color silvery-grey plastic without the black accents on the alloy. Perhaps the turbine-design rims would have lent themselves more easily and convincingly to Paragon’s typical way of replicating BMW rims. The brake discs look good being “drilled” instead of flat like in the BMW 335i. 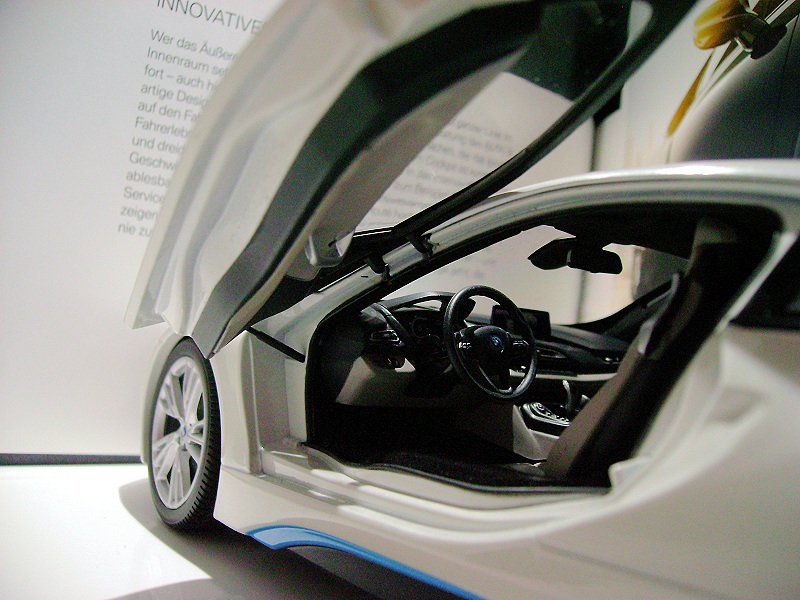 The doors swing open easily, but only stay open if propped manually onto the “hydraulic dampers” which can be folded on a hinge in the door.  AUTOart of course does that a lot better and more realistically on its scissor and gullwing door models, but let’s keep in mind that the i8 only costs 69 to 79 Euros. The interior itself is surprisingly good for a budget model and is fully carpeted. My two-tone interior (the blue i8 comes with black seats and dashboard) with its silvery chrome bits is colored neatly and Paragon has given the car proper cloth safety belts in both the front and rear, but in a rather conventional black cloth instead of BMW’s electrifying blue option for that safety feature. 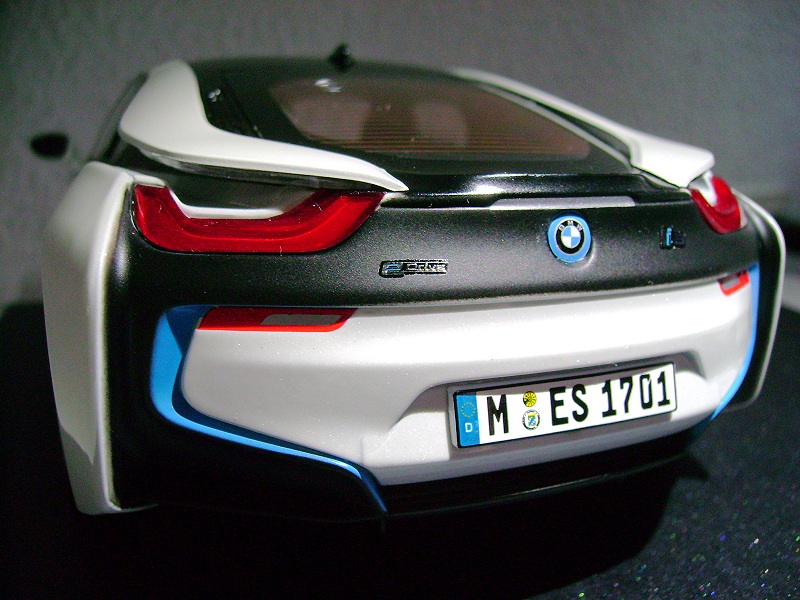 All in all, it’s quite a nice replica of an exotic that is not only attractive to BMW fans, but one of the more exciting milestones on our way into the post-combustion-engine-age. And in contrast to a noisy wage-guzzling AUTOart V12, you need not even charge your wallet to its full capacity in order to economically and quietly (thus unnoticed by your better half) slip it into your possession and give the hobby some extra mileage. 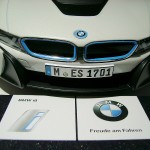 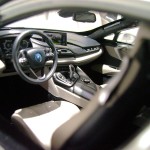 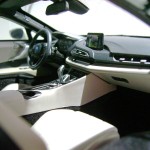 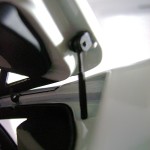 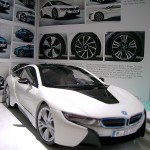 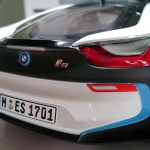 1 Response to "REVIEW: Paragon BMW i8"