Mondeo Illumination, the Hobbies Next Level?

At the beginning of the year, there was news from Fronti-Art that they would offer models with lights. Illuminated models could well be regarded as the next level of the hobby if it is done well. Otherwise, it can easily ruin a model with high levels of detail and quality that models can reach nowadays. There are some attempts by manufacturers, but they are usually kept quite simple. And then there has been a modifying scene for a while that is illuminating models by putting LEDs into your ordinary diecast model, with some doing quite a decent job on that. And that is not an easy task either as both plastic parts and diecast materials have to be drilled and milled into shape to house the tech, the mini car has to be wired up and all the tech and wiring has to be hidden away from view, so that ideally the model looks like any other diecast model … until the lights come on. 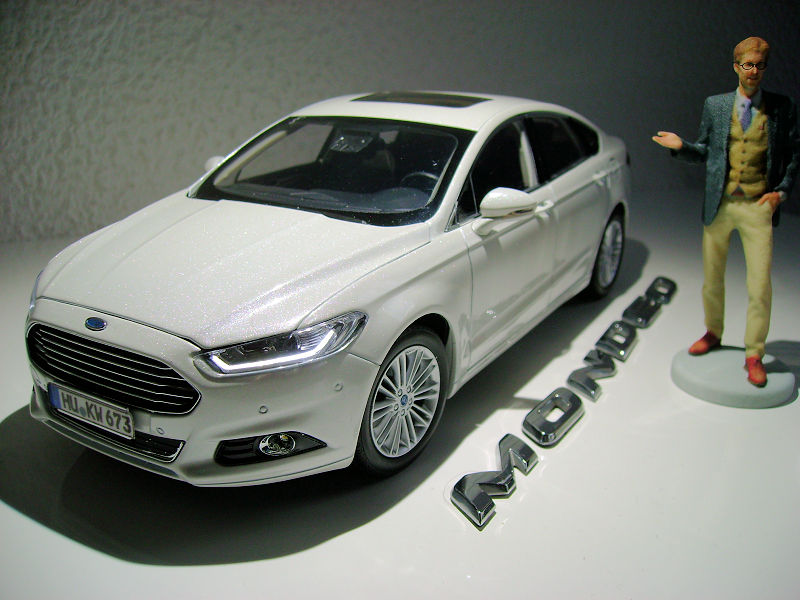 After rather amateurishly having tried this myself in an attempt to recreate two British Police cars, I have given a model of my daily driver, a Ford Mondeo (or Fusion in the NAFTA area), that proudly features one of those cool dynamic indicators and headlights that swivel with the turn of the front wheels to Jakob Michel´s small one-man company “Modelllichtsysteme” just 250 km away from my home town, to explore what is possible. I had come across his work on Youtube and had been encouraged to commission my Mondeo after seeing a dynamic indicator on an Audi model he made.

Today I would like to share the result with you. Let´s start with the things that were explored, but could not be realized. The swivelling headlights that I hoped for could not be done, neither the driver´s seat that automatically slides back to allow easy entry/exit or mirrors that fold. I guess, you would not have expected these features anyway, but they were seriously looked into. 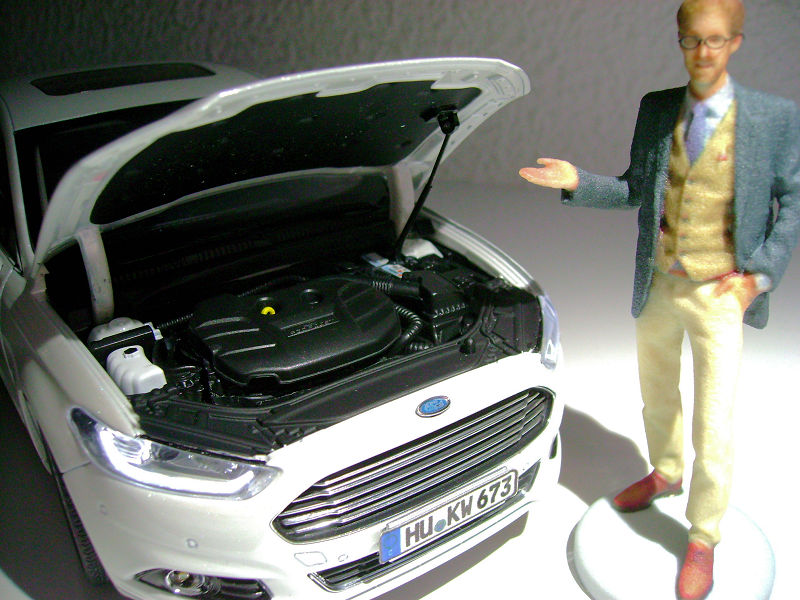 What was realized is not always true to reality, but brilliant nevertheless. Most impressively the dynamic indicators work just the way the original does. With the headlights turned off, the daytime running lights are much brighter than with the low beams turned on. This changes when the indicators come to life. Then they are dimmed down low to make the dynamic sideways movement of the additional indicator more visible. At the same time, the door mirrors´ indicators and the non-dynamic indicators in the rear light assembly will flash. The indication is possible for a left turn, right turn or simultaneously as hazards. What´s not true to reality is that the high beam comes on with the indicator, even one-sidedly, when the low beam is on. The fog lights are realistically yellowish rather than white, but they would not shine with the headlights off.

The red tail lights are true to the original in shape and brightness but in reality would not burn with the low beam off, unless just after unlocking or before locking the car. The white rears have not been replicated, but there is white licence plate illumination. The brake lights are in the rights place, even the third thin brake light in the rear window works but would be white, when not on, obviously something that could not be done in red LEDs covered by a white glass in such a small size.  Actually, the red paint used reacted with the plastic and Jakob struggled but managed to keep the rear window glass intact. Opening the boot will switch the carpeted luggage compartment´s light on. A cool feature takes us to the interior of the car: The brake lights cannot only be activated as part as the remote-controlled demo cycle, pressing the brake pedal will switch them on/off manually. 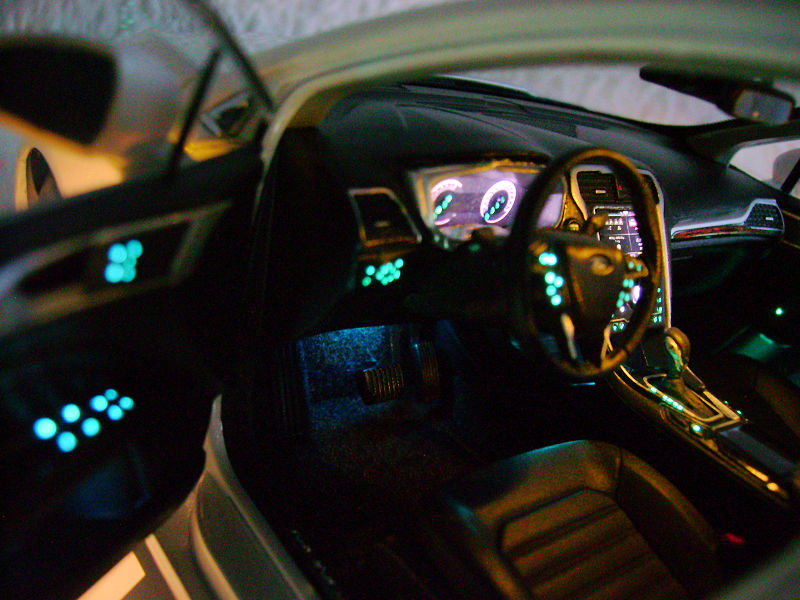 Opening one of the doors will activate the interior overhead lights front and rear and the white lights in the doors by fading in upon opening and fading out when closing the door. The mirror feature is wrong, though; these would start to glow their “welcome” or “farewell” when unlocking or locking the doors. But the locking or unlocking scenario including flashing the indicators and bringing the tail lights and the daylight running lights to a glow does not exist in this unison. Inside the cabin the button illuminations, even in the doors, the centre console touch screen and the gauges come to life only when the low beams are turned on, which is wrong of course because they would whenever the ignition is on. Impressively, but not quite convincingly the gauges´ hands extend dynamically when the instruments and buttons light up, but not as a needle but as dots that are not aligned straight. Indicator control lights are absent, unlike in some other cars. All the buttons are blue like most of the original´s car, that only has red LEDs in the seat heating buttons in the centre console. A cool feature that can be remotely controlled separately is the ambient lighting with a choice of seven colours in all the right places, the footwells front and rear, the tray in the centre console, the front door bins. The latter turn red to warn rear traffic in real life, but understandably not on the model. 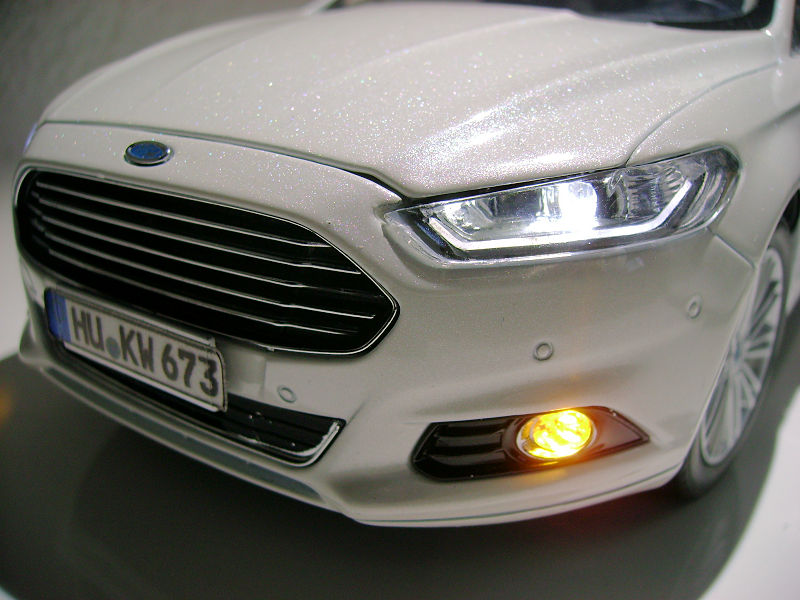 The remote control will allow you to cycle through the head and tail lighting features, with anything else than the bright daylight running lights illuminating the interior instruments. Another button controls the indicators cycling them from left hand to right hand to hazard indication and back off. One button is dedicated to ambient lighting options. The demo button will switch a demo cycle on or off, indicated by the indicators flashing as if locking or unlocking the doors, but without the other light features that would accompany the locking/unlocking process. These are featured separately in the cycle, fading in and back out the white mirror and overhead interior lights in one step, glowing the daylight running lights low without the headlights in unison with the tail lights in a separate step. The other steps are the other light features, including the brakes that cannot be controlled separately via the remote.

You could argue that there is far too much that is not true to the original lighting choreography, but the lighting is done neatly, without light bleeding through gaps where it should not be. And you must admit that the features are fascinating and convincingly close to what the original car does, as long as you don´t expect features to happen simultaneously. You need to know the real car to notice and I guess even some owners would not. 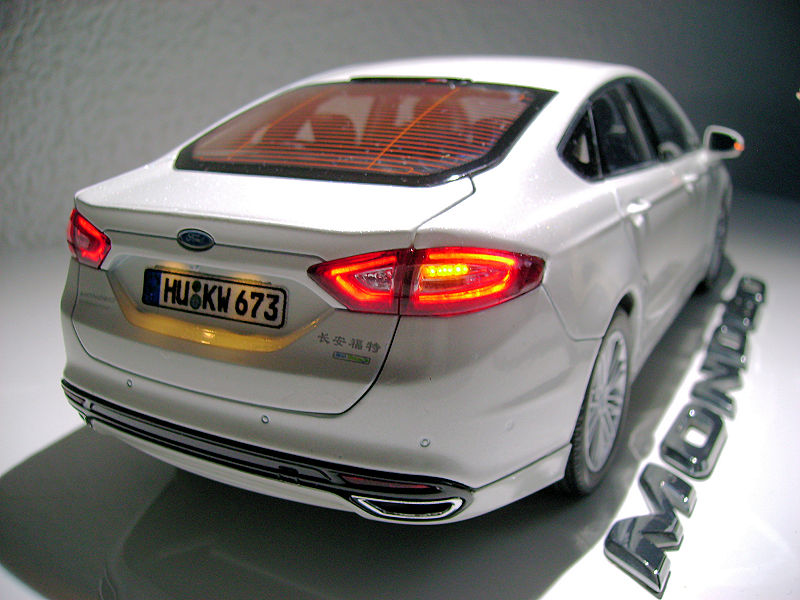 Technically, a thing of wonder is how hidden away all the technology behind it is. You may have noticed that the boot is empty, nothing in the cabin and underneath the bonnet, the engine bay seems to hold nothing than the engine either. But the engine´s plastic moulding can be taken off and covers the battery that needs to be accessible to be replaced. The only other thing you will find is the slide on/off switches under the car. Everything else remains invisible.

In the comments to his videos, people keep asking “Where can I buy?” and “How much is it?” Well, you cannot buy these, you have to send him your model plus a deposit of half the price he asks with the rest to be paid when the model is finished. And you need patience … a lot of it. In my case, the project took him over two years. What you get in return, however, is a unique modification of a model of your choice, something that not everyone will have in their collection.

6 Responses to "Mondeo Illumination, the Hobbies Next Level?"