Prior to the release of the production car of the new Toyota Supra, the Toyota FT-1 Concept took centre stage, which I believe was unveiled to the public back in 2014.  The design was fresh and new, something never imagined by Toyota past or present.  It was received with positive fanfare from both sides, those who follow the Toyota brand and those generally outside.  The actual design comes from CALTY Design Research, Toyota’s North American design branch.  The focus here is pure performance, sports car-inspired, and track-focused!  Personally, they hit a home run, and this speaks volumes from someone who considered much of the modern Japanese assortment uninspiring and boring. 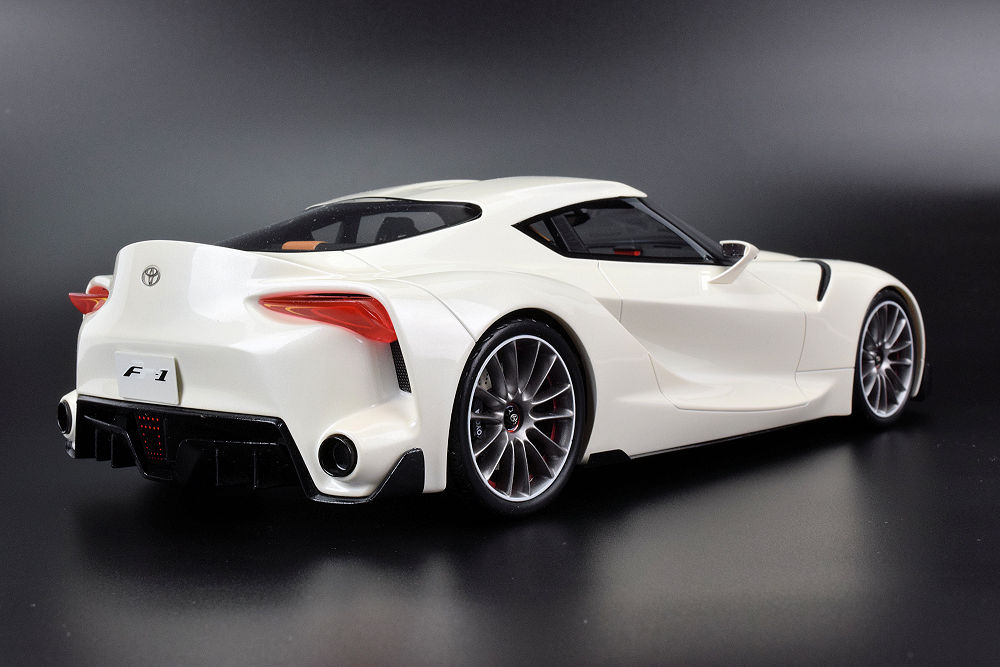 When we later learned this concept would transition to the new Toyota Supra the adrenaline started to flow.  What could be the possibilities?  An affordable, attractive, and reliable sportscar, could it be?  Unfortunately, what actually came to market as a production vehicle is a far cry short of the amazing initial design.  Basically, what Toyota presented was a re-badged BMW with shortened chassis, more so lacking their own originality and now my personal dreams were deflated… 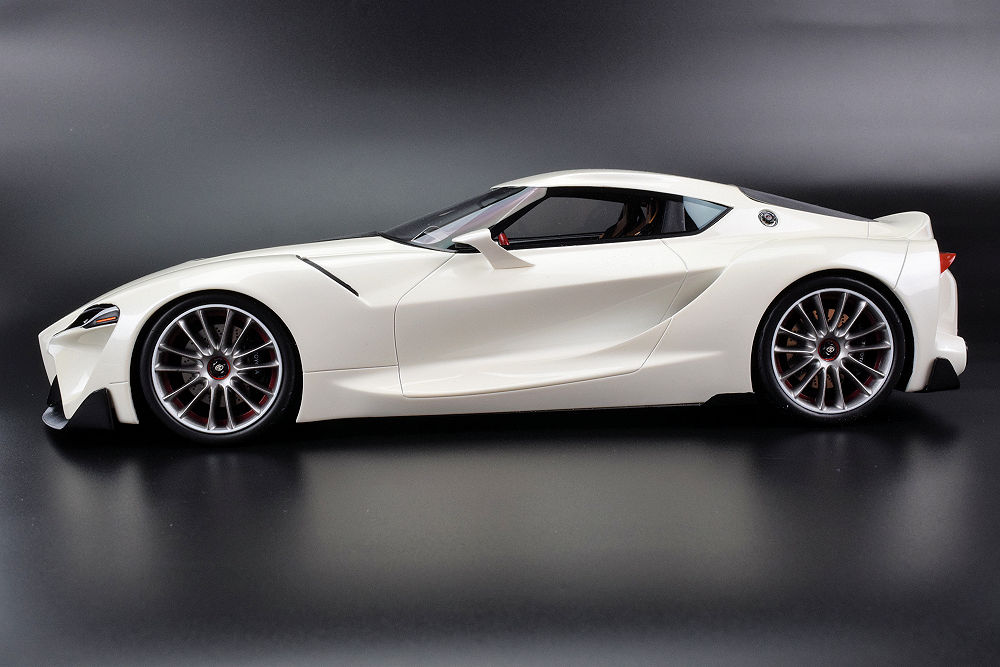 So if you can’t have the real thing the next best thing is a scale model replica.  A year or so ago the team at AB Model or Autobahn Model released a limited production run of the 1:18 Toyota FT-1 Concept.  This model was crafted in resin with sealed body design.  Multiple colours were available until recently as most have sold through.  In the end, I choose Pearl White.   The Red exterior would have been the first choice, but a little too pricy now, and exceeds what I’m willing to pay for a sealed replica.

AB Models Toyota FT-1 Concept is presented in an attractive package.  For about $350 CND the model is presented on a felt base with limited edition plague.  It also includes dust cover.  The model itself is shipped with a cardboard box with outer sleeves.  Inside the front cover flips forward with the model covered in a felt wrap material.  Presentation is really high-end, something on the lines of BBR, Looksmart and MR Collection. 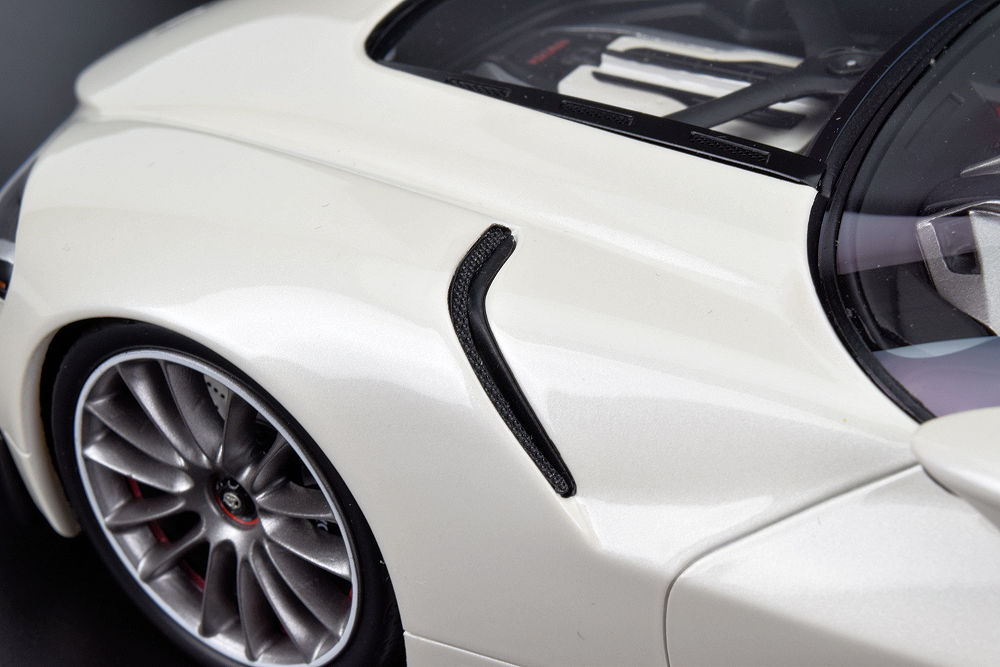 The FT-1 Concept is nothing less than sexy, the exterior body lines are stylish and flowing.  Good marks to AB Models for capturing the overall look and feel.  The paint application on this example is very good.  There are no noticeable flaws.  All open cooling and related openings are all capped with solid pieces of plastic.  This is frustrating, at this price point that should be re-created with perforated grilles.

As for shutlines and panel gaps, they are perfect. This is a given with resin and sealed in general.  Good marks to the AB Model for the quality definition of the panel gaps, they are clean and crisp.  Also, all the inner workings of the body panels with the opening vents, intakes or curves on the exterior and inner exterior side aspire to the same level. 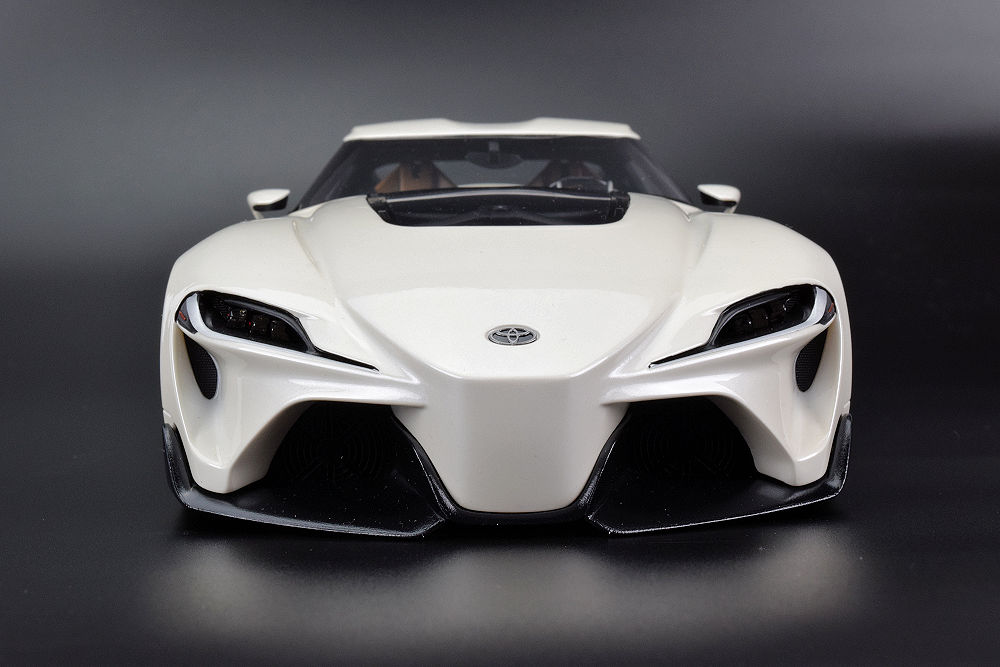 There is much going on with the front of the FT-1 Concept.  Two massive intakes provide a view of cooling fans behind.  The fans are somewhat primitive in execution, and not on par with the price.  The lower chin spoiler is covered in carbon fibre decal, the weave is extremely tight and only noticeable with secondary lighting.  Two intakes on either side are capped with solid plastic.  Headlights are good in overall execution. And nice to see the Toyota emblem centre is crafted with a 3D like piece. 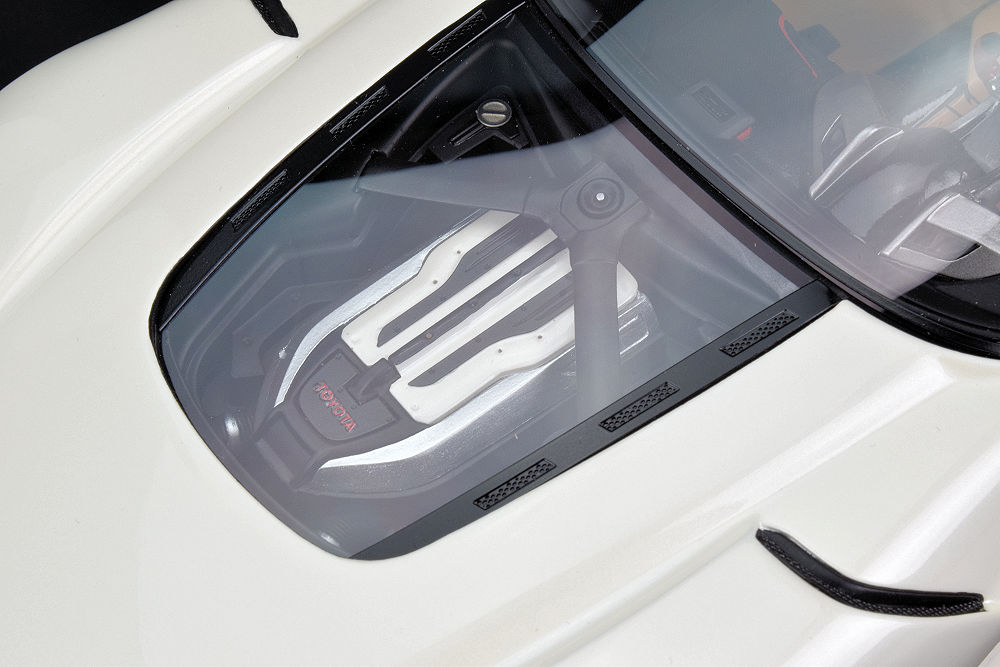 As we move back the hood transitions into a glass top that reveals the motor.  Overall decent in presentation, but it is somewhat flat and lacking in detailing.  Nice to see the structural supports are present and as per the original design one leads into the interior of the car.

The rear maintains the graceful lines.  The spoiler is found in the closed position.  It would be nice if the AB Models considered a limited run of the same with the spoiler up.  Do you agree? 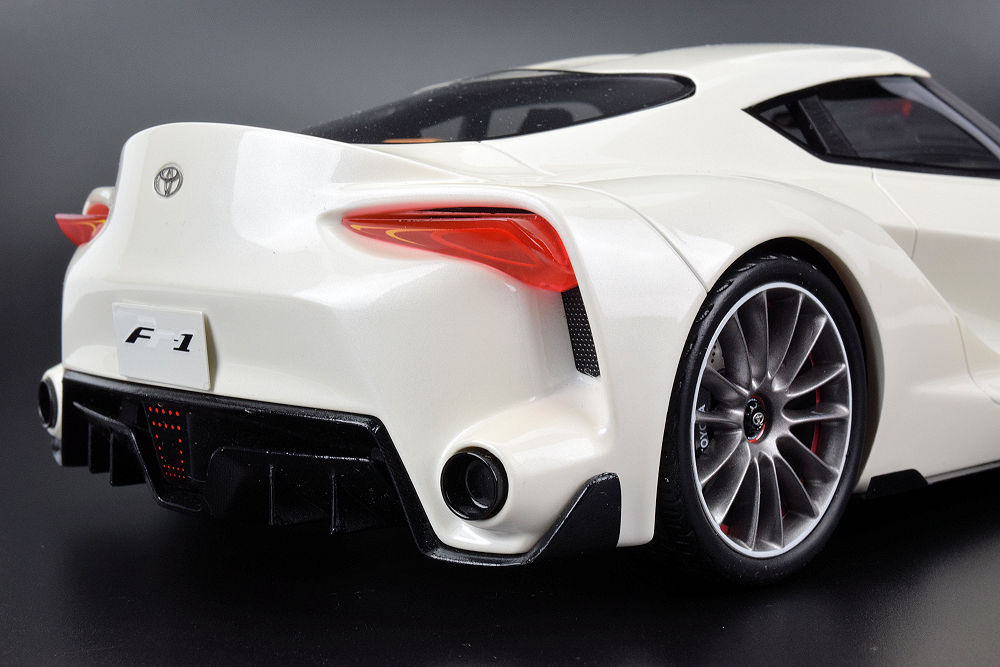 Both openings on either side are again capped with solid plastic.  Nice attention to detail with the taillights, and with the photo-etched Toyota emblem in the centre. 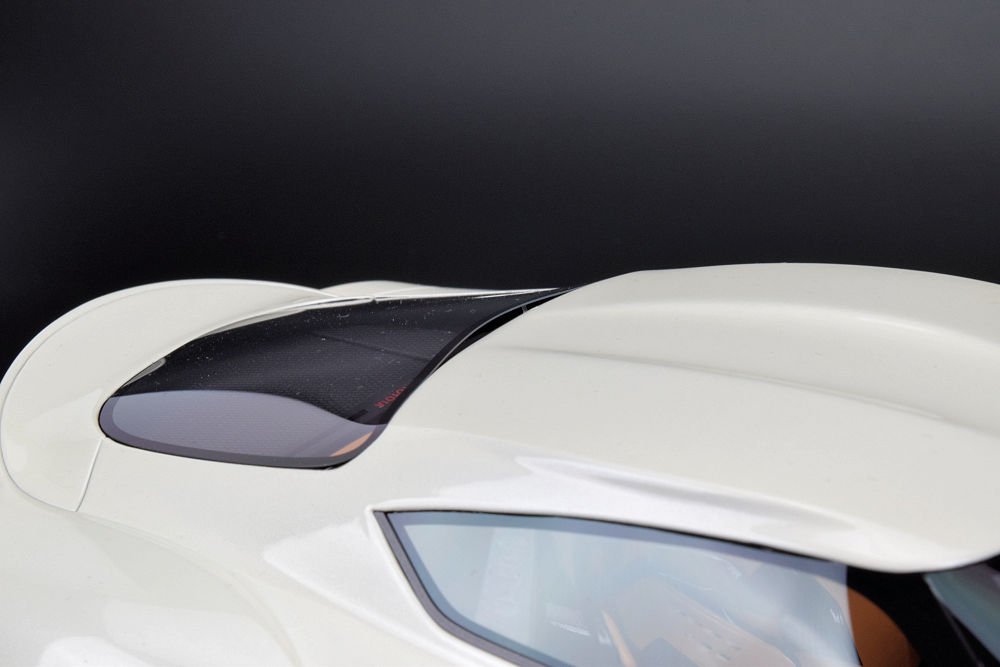 Unfortunately for me, there is an issue with the rear glass on this example.  This is very typical of resin models in general.  Seating isn’t perfect in the centre upper section.  Based on the fact this is a sealed model one would expect the exterior to be near perfect before leaving the factory.  Initial conversations with AB Models have been very positive to date, hopefully, a mutual resolution can be achieved.  So, for service after the sale, very good marks! 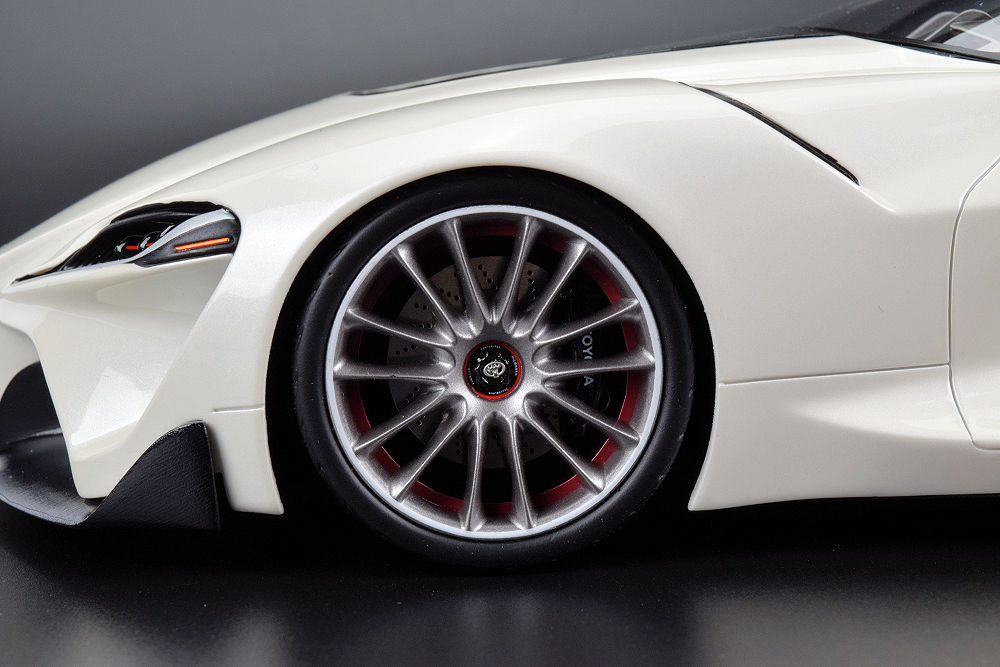 The wheels, in general, are a solid effort.  The Silver paint is matched with Red around the perimeter.  Cross-drilled rotors are photo-etched and feature Black calipers with the Toyota logo on each.  The miss here is the offset of the wheels, the wheels on the model are inset, to be true to form they should be aligned with fender lip. 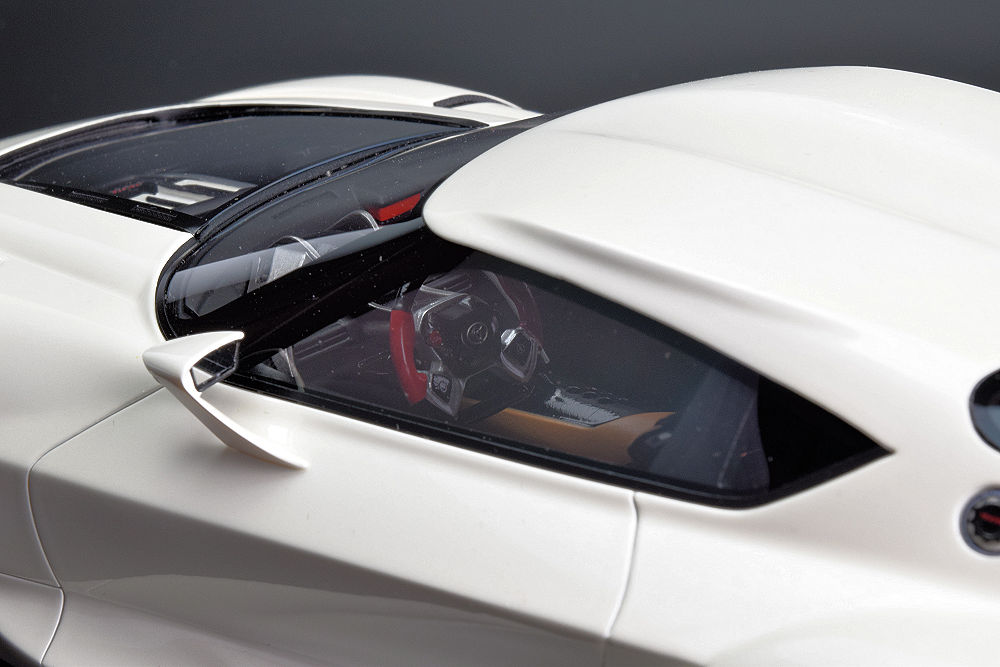 In the interior of the FT-1 Concept is solid, good use of materials and paint helps define a proper looking interior.  Carbon fibre elements are found within the seats and centre console.  The steering wheel is beautifully defined, one of the best our team has seen in a while.  No seat-belts are present or flocking.  However, I’m not sure if interior carpeting is present on the FT-1 Concept in general. 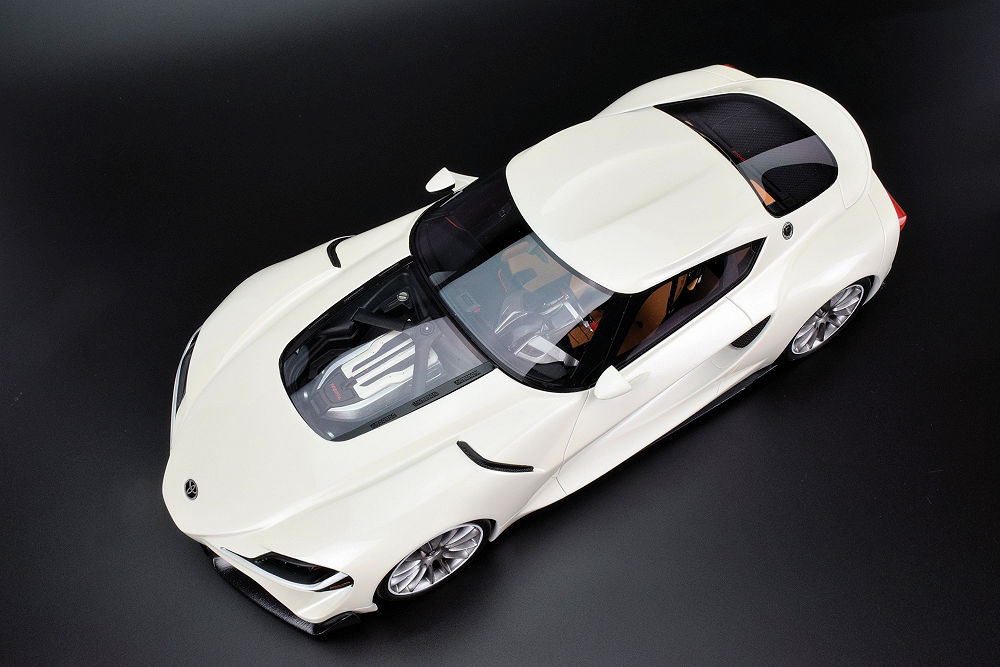 It is amusing what motivates collectors to purchase scale replicas.  In this case, I wanted to preserve the memories of the Toyota FT-1 Concept as the production piece falls short of what the initial design was invoking.  The AB Models example is particularly good overall, shortcoming includes the use of solid plastic as mentioned above. Comparisons execution wise are along the lines of GT Spirit and others.  Some will say the price is too high, but my augment is can it be justified based on limited production run?  I think so, and at the end of the day passion it what moves this hobby along, unfortunately, this passion did not transcend over to the production car.  Enjoy the pics!