This next model was years in the making, it was first documented here on DiecastSociety.com back in May 2018.  The car in question is the Jaguar C-X75 by Almost Real.

It was so many years ago that I gave up on it ever being issued.  Another cancellation by another manufacturer.  This is nothing new in the hobby and does happen on occasion.  Outside the possible Almost Real option, was the VAV Models resin and sealed inspiration.  Which I ended up purchasing some time ago…  My model featured a Dark Blue exterior and spoiler in the up position.  There were actually two options offered, one with the rear spoiler closed and the second with it open.  The cost was just north of $200 CND prior to shipping.  Overall I was quite pleased with the VAV offering, perhaps the diameter of the wheels was slightly too large, however, my biggest complaint was it was sealed!

Fast forward to October 2022, we receive word the production model is coming this month and our sample is in the mail.  The excitement levels are definitely rising!  Finally, a scale representation of the Jaguar C-X75 with access to the internal bits!  Our sample paint colour is called Firesand Metallic, one of five actual prototype cars that Jaguar did produce beyond the original concept vehicle (which featured turbine engines and electric motors).  The retail price for Almost Real’s effort is suggested at $188 US, about $259 CND.  Slightly more expensive than the VAV static piece. 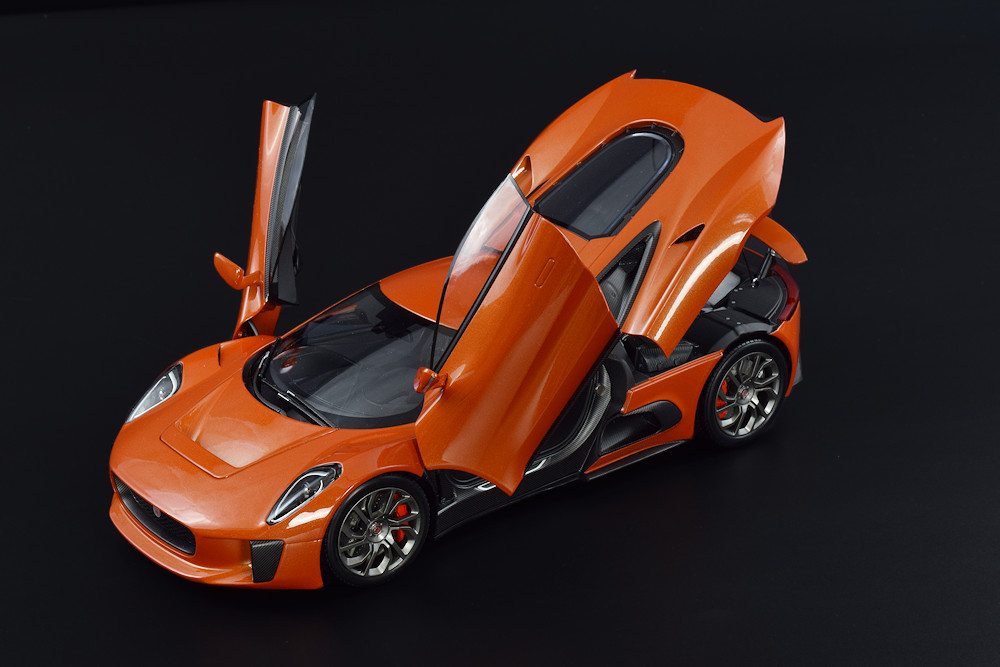 Just to let you know, Almost Real, as per our dialogue is planning to action all five cars.  So, if the Orange exterior isn’t to your liking a little more patience will produce more options, hopefully in the near future.  Please don’t ask for a release date, they did not provide a timeline – we did inquire LOL.

The Jaguar C-X75 was definitely ahead of curve.  As mentioned in the original concept form the power was generated with turbine engines along with electric motors.  In theory, it worked, though in a practical sense Jaguar moved away from the turbine motors and kept the hybrid theme of traditional (gas) and new (electric).  For the period it produced a total of 502 hp from a mere 1.6l.  The plan was to make 250 cars in total at a price just north of a million dollars.  However, the volatile economic period of time scraped the production cars for fear they would not sell.  We are left with five cars in total, one of which was made famous by the James Bond movie Spectre. 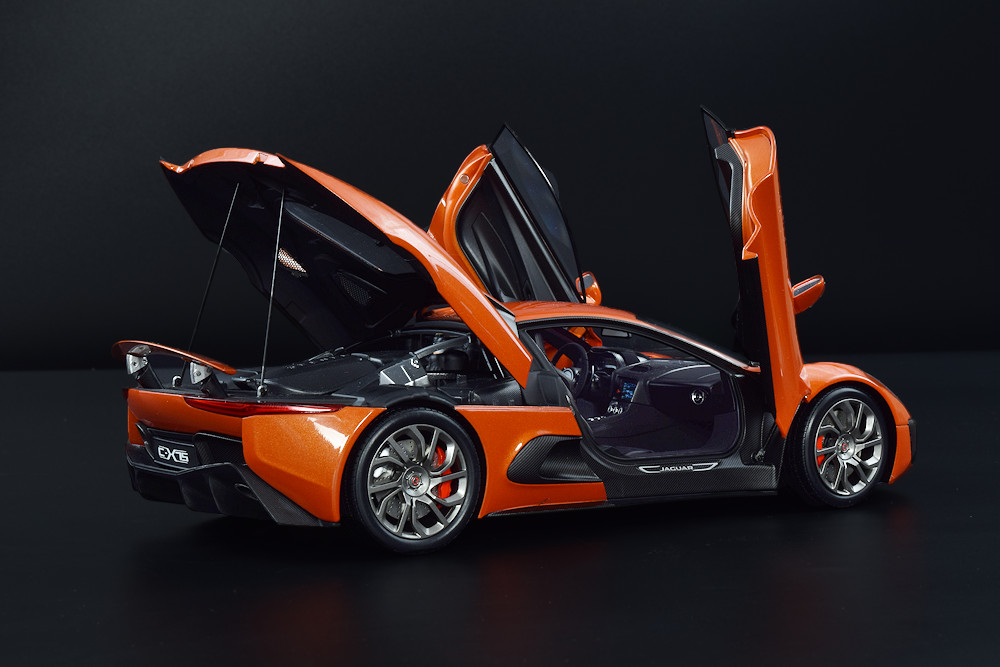 The model comes from Almost Real in a typical box with a clamshell holder.   Release four thumbs screws (which I hate) and you are free to explore!  The only additional item inside is the “Collectible Certification” card, this sample is noted as serial number 1002.  A simple instructional document would be my recommendation to Almost Real to include in future efforts – something that explains what physically opens and how to unlock each element without damaging the model.

From the exterior side, the Firesand Metallic paint is nothing less than stunning.  Application is consistent from front to rear.  The accompanying carbon fibre elements are actioned with precision, though a little more gloss in the finish would have been preferred. 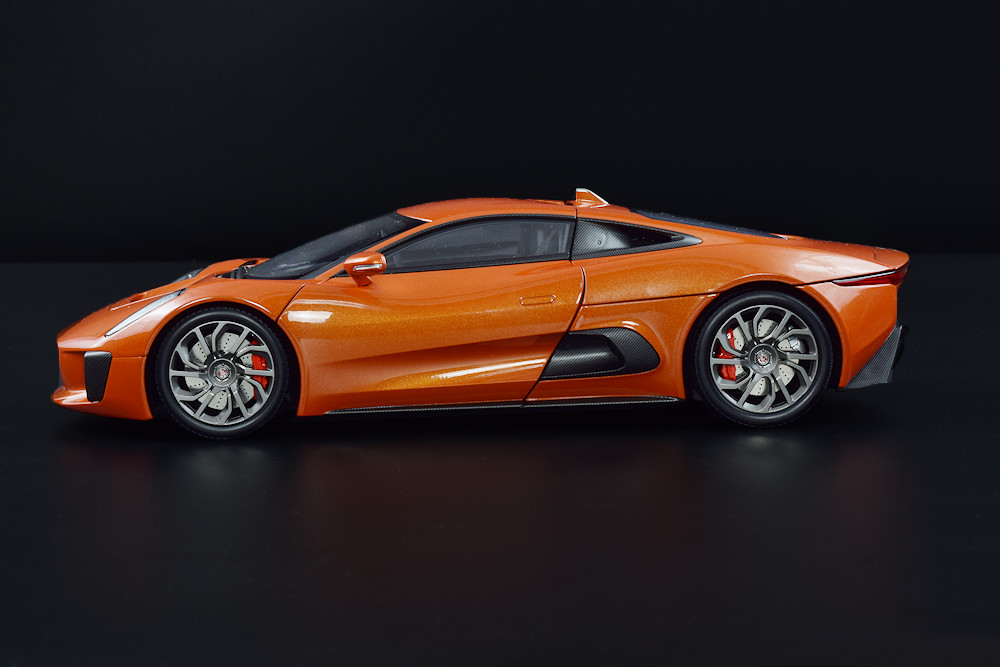 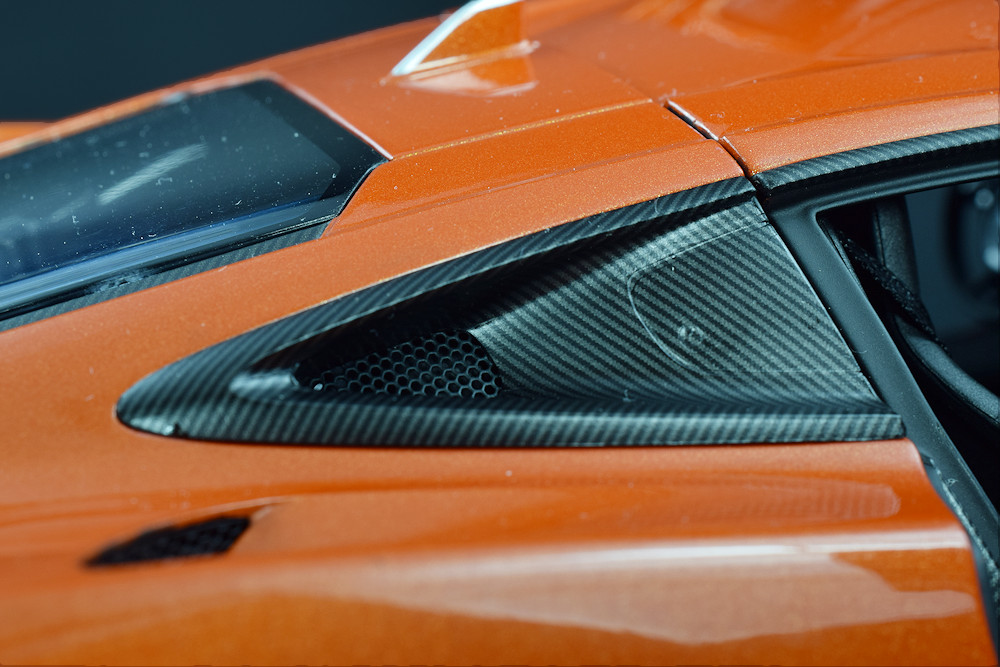 As for body lines, good marks to Almost Real for capturing the design in scale.  This model does provide access to the interior and motor, the one exception is the front access panel – shutlines and panel gaps on our example are done well, considering the massive rear bonnet that is capable of a full swing.  One detail missing is the panel locking system on the front or rear end and the screws for the forward access panel – now when examining photos of the 1:1 cars this varies greatly, some were available with this locking system, while some were not, and there was a third option to confuse things, even more, a combination of the two.  What is accurate?  I’ll leave that up to you. 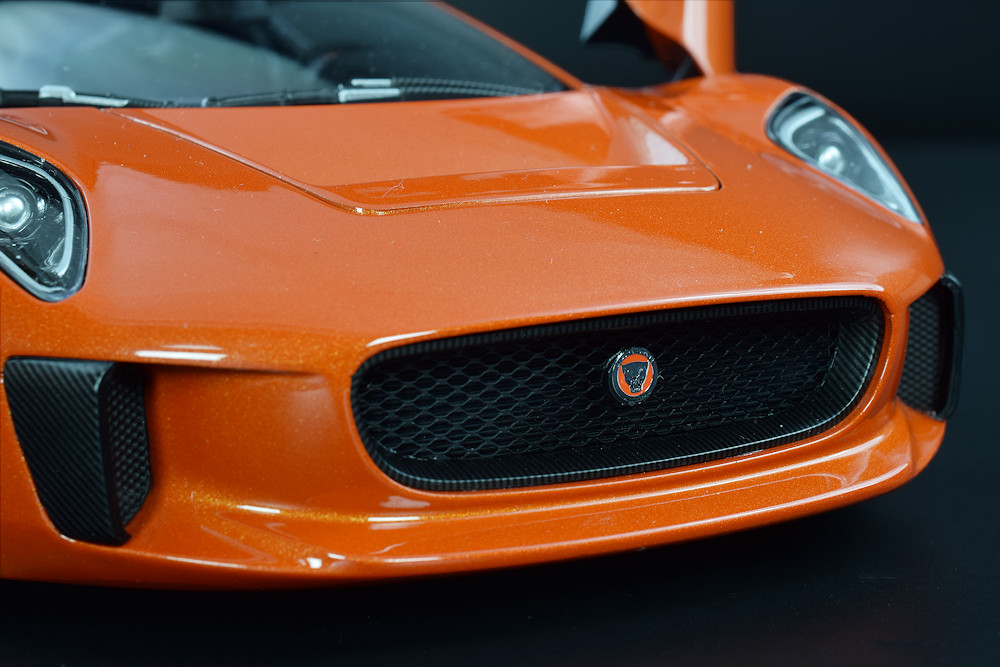 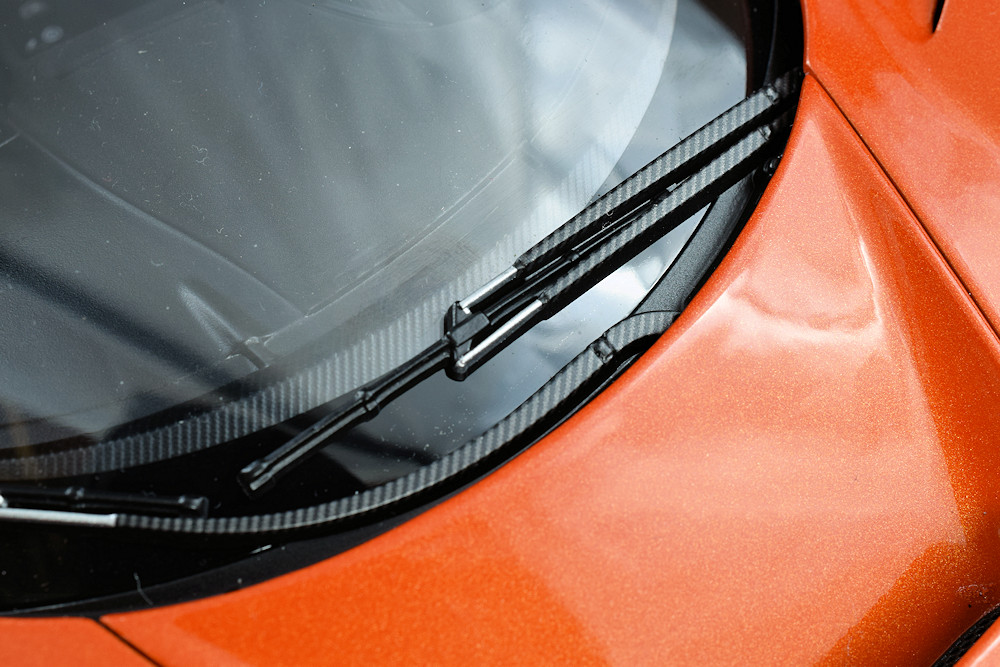 The front of the Jaguar C-X75 is extremely polished.  Good marks to Almost Real for providing a metal grille and quality emblem.  Even the headlights are adequately detailed and provide the outer perimeter lighting and the detailing/grooves in the upper section.  The wipers are documented well, on closer inspection, you can see Almost Real did execute in carbon fibre with additional chrome accents as per the original.  Well done! 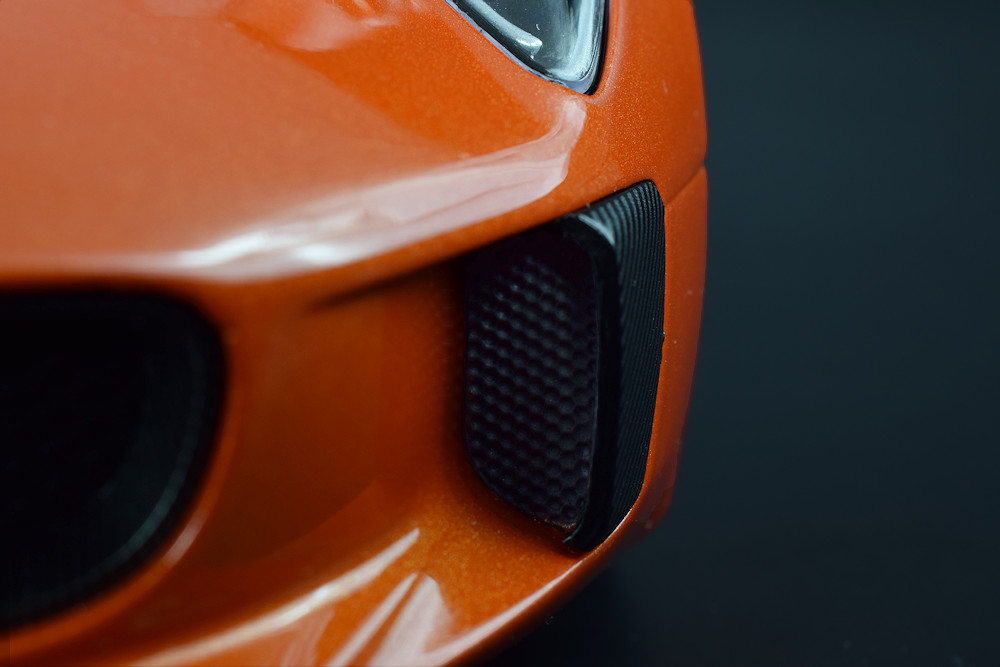 The negatives here include outer cooling ducts, though looking strong from a distance upon inspection these were capped with solid plastic.  Based on the size, these grilles should have mirrored the centre grille – even VAV Models executed their piece with perforated metal!  On the flip side, I’m happy to announce the remaining opening throughout the model is executed with perforated metal grilles. 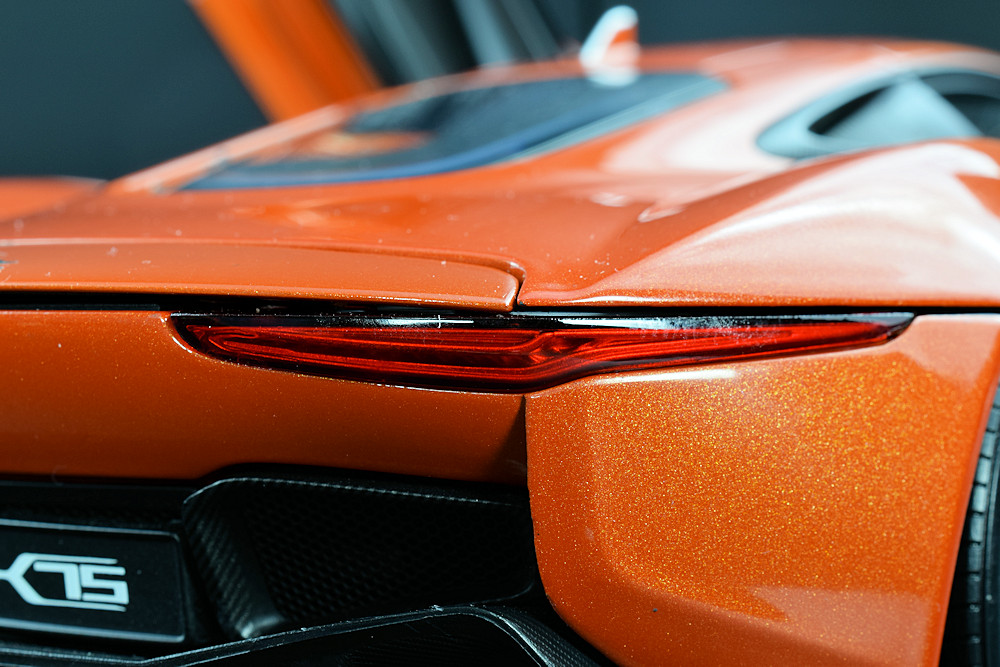 Moving to the rear, one can see some of the internal motor bits through the rear grill work.  Pushing the basic elements of a model, you will also find a full-functioning rear spoiler – opening and closing motions are done without issue with the spoiler returning home to offer clean gaps all around.   Not an easy task.   The Jaguar logo is photo-etched and presents well, though with a little more thickness this would have mirrored the original to perfection.  The taillight design is sharp; overall, the rear side is a solid package.

The motor of the Jaguar C-X75 is accessible, the massive hatch does provide a look at the motor below via the large glass opening.  Fine detailing of carbon fibre surrounds the outer glass and accessing the motor is quite easy.  No need to open the doors either, just lift to open.

WARNING – Note the hatch on this model is spring loaded, be careful when lifting that you do not lose your grip, otherwise, you will have a good chance of the hatch slamming shut, which will likely result in exterior paint damage!! 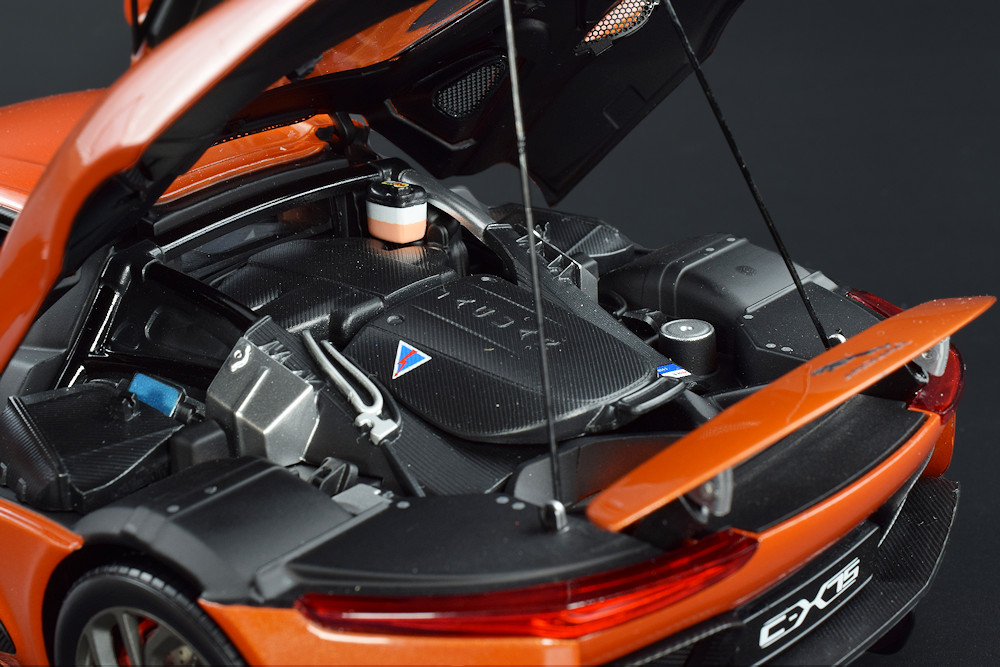 Once inside there are two secured prop rods on either side.  Unlatch each and slowly lower the hatch.  I found it best to position one at a time, and don’t use the provided holes in the defined under-belly of the hatch, the alignment here is off and unstable in my opinion.  The optimal range is closer to the centre position, as shown above. 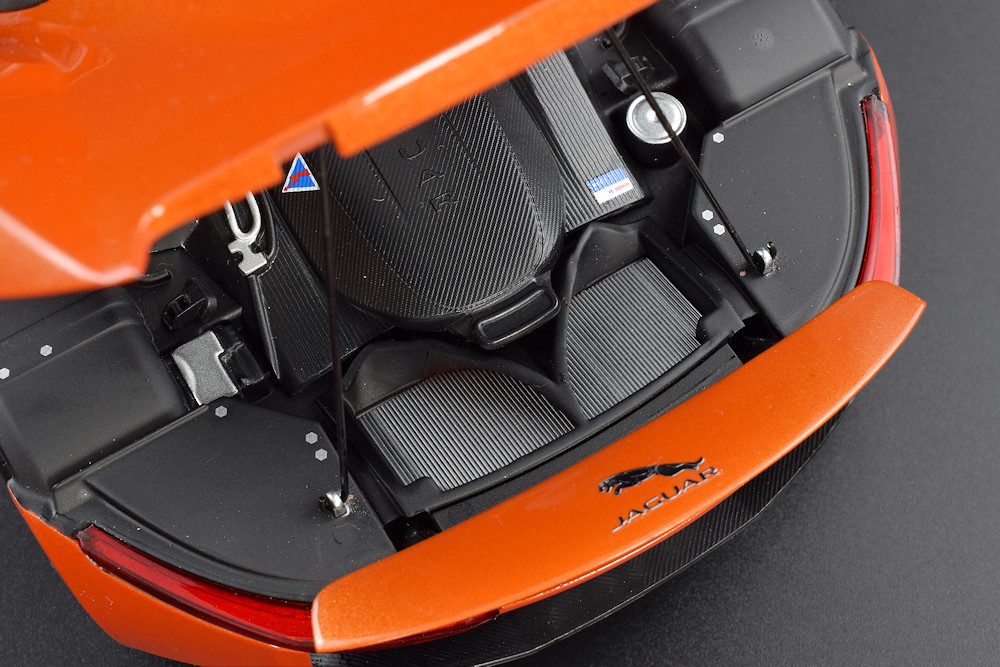 Other than the finish underneath the hatch and visible cooling opening there isn’t much excitement here.  The motor in short is an extreme disappointment and resembles that of an opening price point offering from Masito or a similar brand.

I’ll give the centre structure of the engine some props with the carbon fibre wrapping and overall look, but the rest of the supporting cast just looks like a miss match of parts – what exactly is that chrome/silver bit on the left?  Why wasn’t the fluid box on the upper right completed with clear and not white fluid?  Albeit this is not an Almost Real AR+ release, which is reflected in the price.   As per Almost Real the Jaguar C-X75 shares its space with their earlier release, the Mercedes-AMG GT-R.  Price aside, the results here look rushed and someone puzzling. 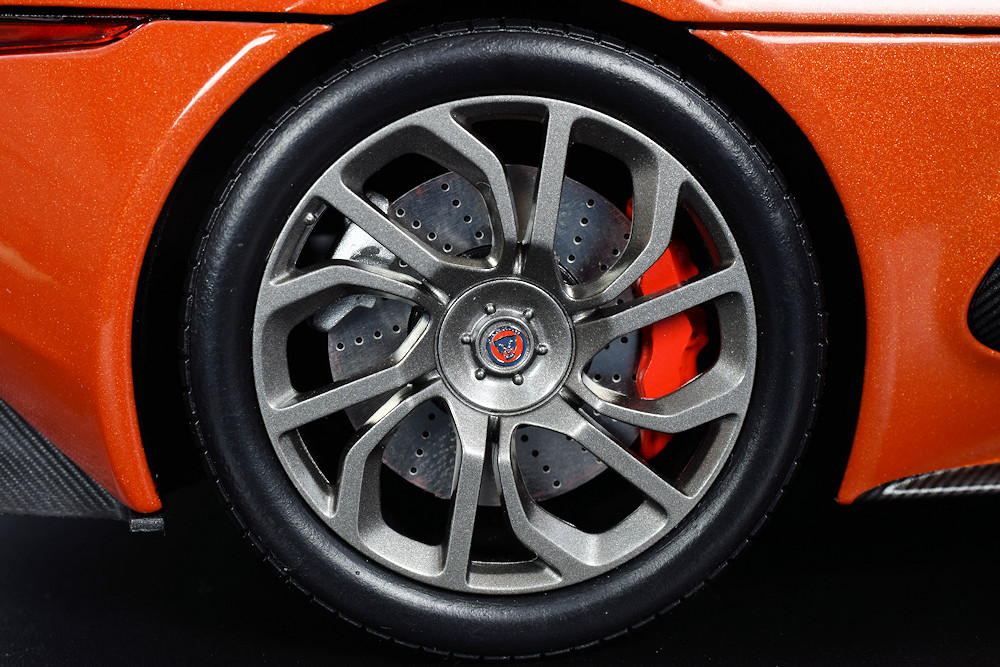 Ending with the exterior side, the wheels are presented with a gun-metal-like finish.  Overall exemplary marks here, this goes right down to the centre cap details.  Though the package could have excelled with air valves and tire branding, likely a cost-saving measure.  The calipers and rotors are neatly packaged behind, no badges were found on calipers (this is correct to the original car) and cross-drilled rotors.  From what we gathered these should be slotted not cross-drilled. 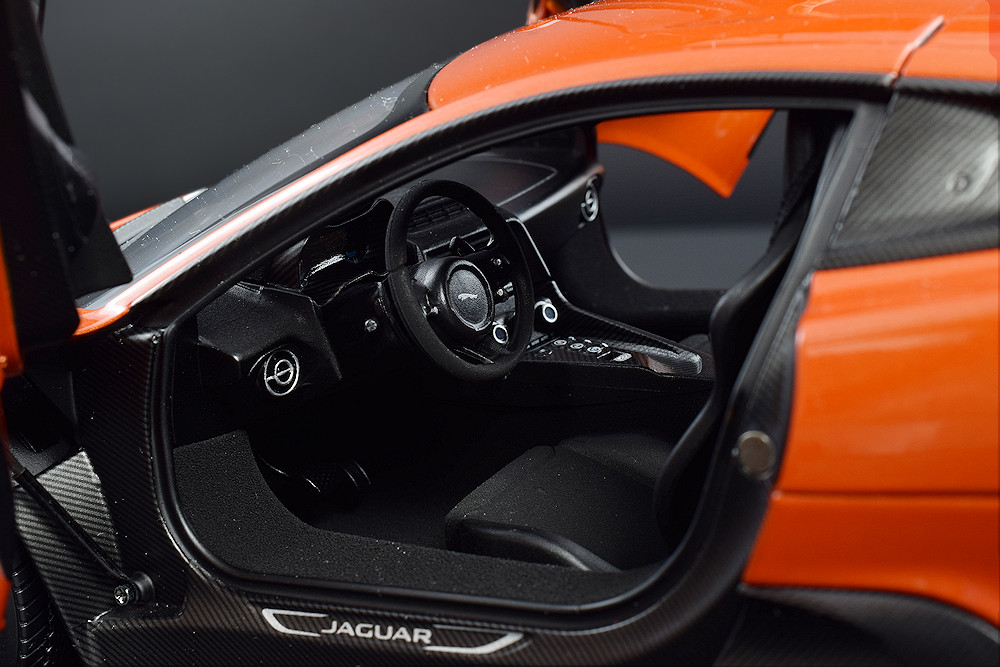 Access to the interior is complete via the two up-swing doors, each working flawlessly. A magnet on each door helps keep the shutlines and panel gapping in a favourable place.  The outer framework is neatly wrapped with carbon fibre.  Inside the interior is dressed with Black plastic and textured material that resembles Alcantara or suede, not sure what choice of material was used back in the day.

Various interior elements have carbon fibre wrapping too.  The use of Silver/White paint with decal work throughout the interior and notable centre console are a plus!  The results here far exceed the engine disappointment. Traditional seatbelts are provided, though depending on what Jaguar C-X75 photos are examined this could result in a full race harness; the VAV Model for example is shipped with a full race harness. 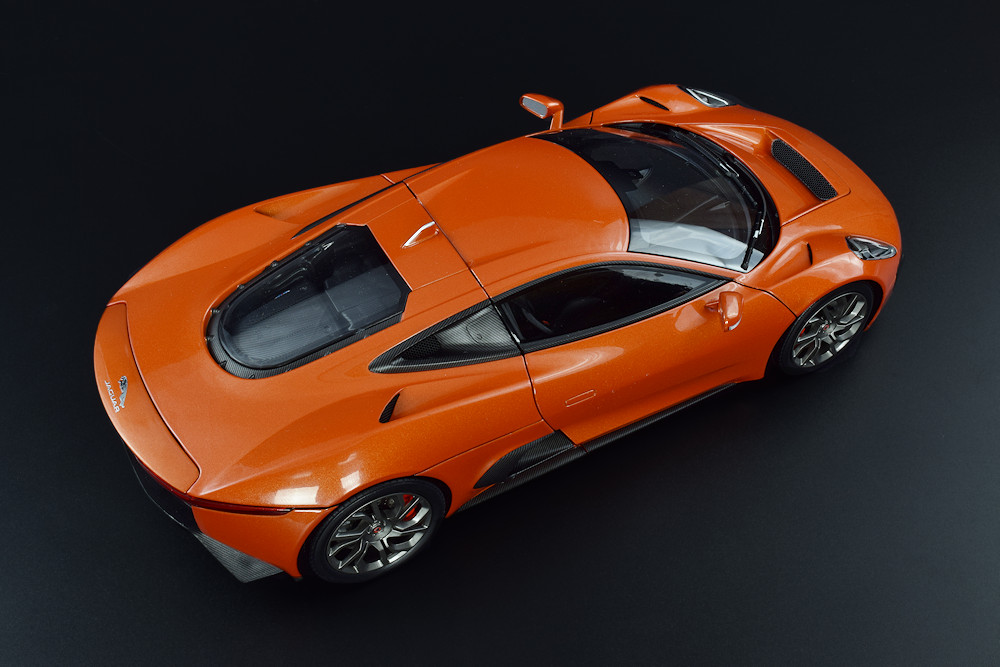 The Almost Real 1:18 Jaguar C-X75 was a long time in the waiting.  Our team has come to expect a level of excellence from Almost Real.  On most checkmarks, Almost Real comes out in spades and on others not so much.  The exterior side is brilliant for the most part, the one exception is the miss of front metal grilles.  The paint is truly terrific and the access to the interior and motor is welcomed by all.

What is painful is the overall engine experience.  As stated above it is somewhat puzzling.  Yes, the Jaguar C-X75 is nearly half the price of their Pagani series, but if you are providing collectors with a view of the motor why not go that extra mile or at minimum half a mile?  I, DiecastSociety.com is not making any excuses for Almost Real and we’re not sure what car was used for the scanning and R&D purposes either, however, based on photos alone of the Jaguar C-X75 engine the results do vary greatly.  My VAV Jaguar is for sale, so that speaks to my decision on which of the two I’m moving forward with.  Hopefully, there is enough information here for you to decide if this one is a purchase.  Enjoy the pics!