It’s been more than thirty years since the original Ertl Company first released the much-revered, highly successful American Muscle line of 1:18 scale classic and modern high-performance cars, and even today the diverse range of subjects under the Auto World brand plays a massively important role in the hobby market. 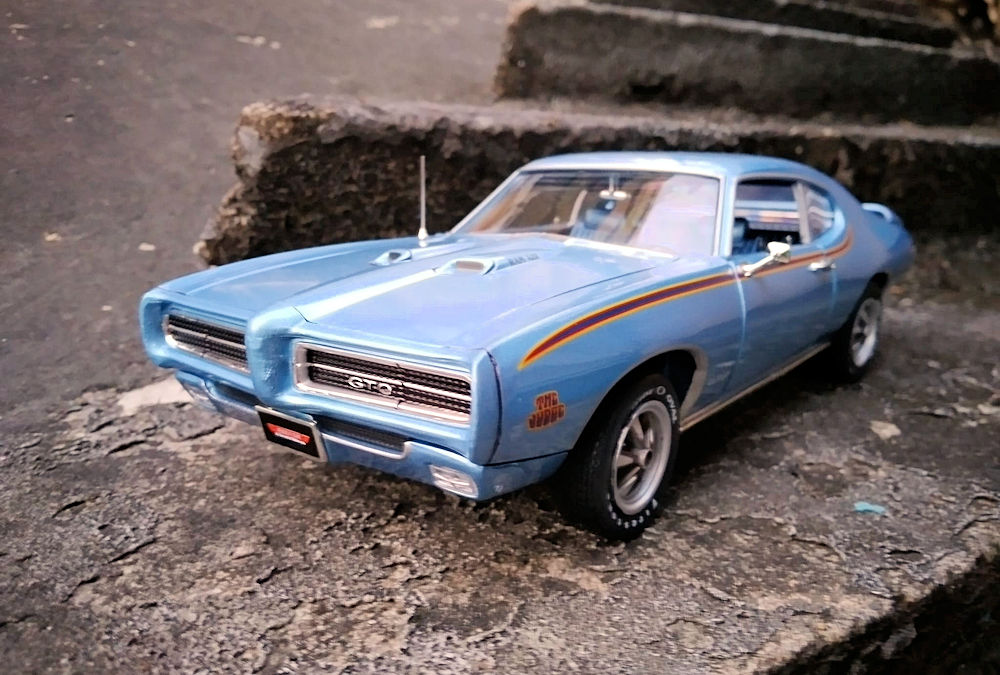 I vividly remember in the very early Nineties the first Ertl American Muscle model in my collection was the Carousel Red (actually the Pontiac name for Chevrolet’s Hugger Orange paint code) 1969 Pontiac GTO Judge. That was the model that started it all for me and my Ertl/Auto World hobby experience, and even today that very same 1969 Pontiac GTO casting remains one of my main lines. In fact, I was fortunate enough to have, close to a decade ago, acquired an original numbers-matching Carousel Red 1969 Pontiac GTO Judge project car, the main inspiration of which was that very first Ertl American Muscle variant. It’s been a long, truly gratifying hobby journey for me and my 1969 GTOs in all scales, and even today my favourite miniature ’69 GTO remains the astonishingly versatile, exceptionally viable Ertl/Auto World American Muscle 1:18 scale casting that has certainly aged with grace and eminence.

In the past few years my quest to acquire the most recent variants of this epic 1969 GTO casting has been characterized by great success, thanks to the sincere efforts of Eric “DecKer Thoys” Tee of Decker Toy Store. 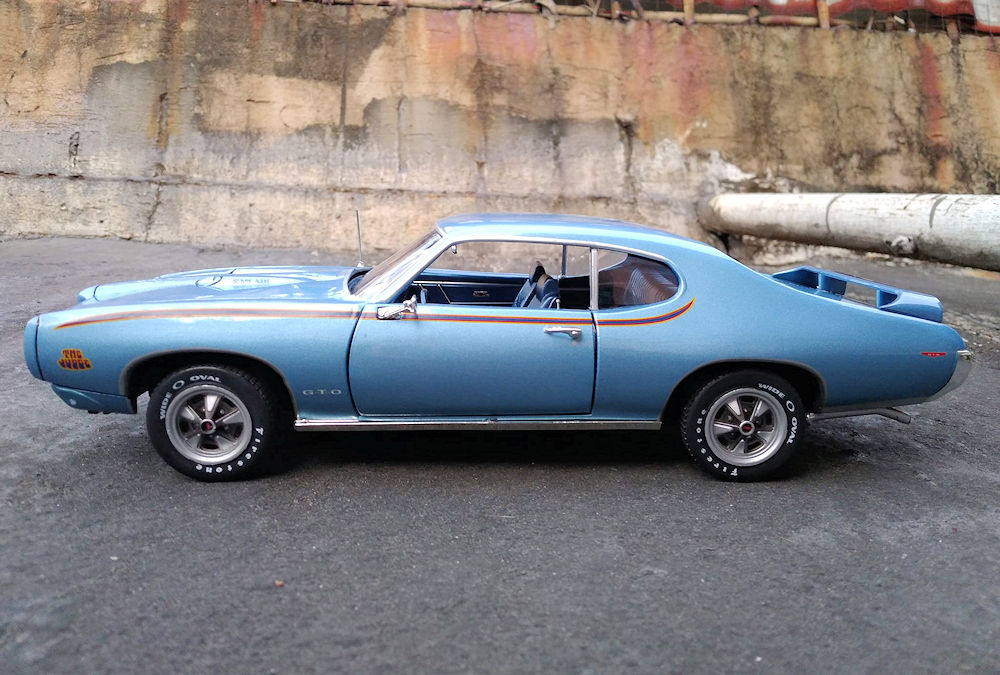 Here’s one of my relatively recent Auto World American Muscle 1969 GTO acquisitions, the special Muscle Car and Corvette Nationals (MCACN) model of an actual vehicle, the Warwick Blue GTO Judge of Frank Szymkowski Sr., a car with some interesting fitments from the factory. It’s got an in-dash tachometer instead of the ubiquitous hood-mounted rev counter, the heavy-duty four-speed manual with the Hurst shift linkage, Saf-T-Track limited-slip differential, and a Delco AM Radio with an external aerial on the passenger-side front fender. The real car is one of only seven (7) produced in the Warwick Blue metallic with the blue interior colour scheme. 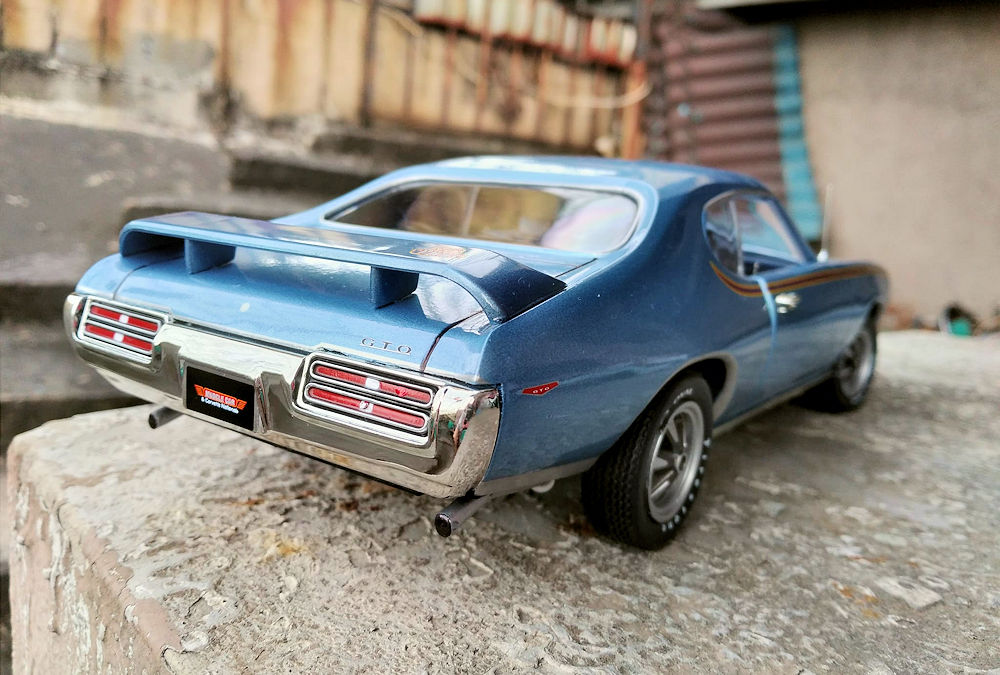 Outfitted just like its full-scale counterpart, this three-decade-old casting boasts a wealth of accurately, intricately-rendered details and therefore most certainly belies its age. Utilizing the exact same casting design, technological constraints and all the dynamic limitations that the original casting had when it was first released in 1991, this timeless diecast metal model can certainly continue to hold its own against much more modern castings that were engineered decades later. 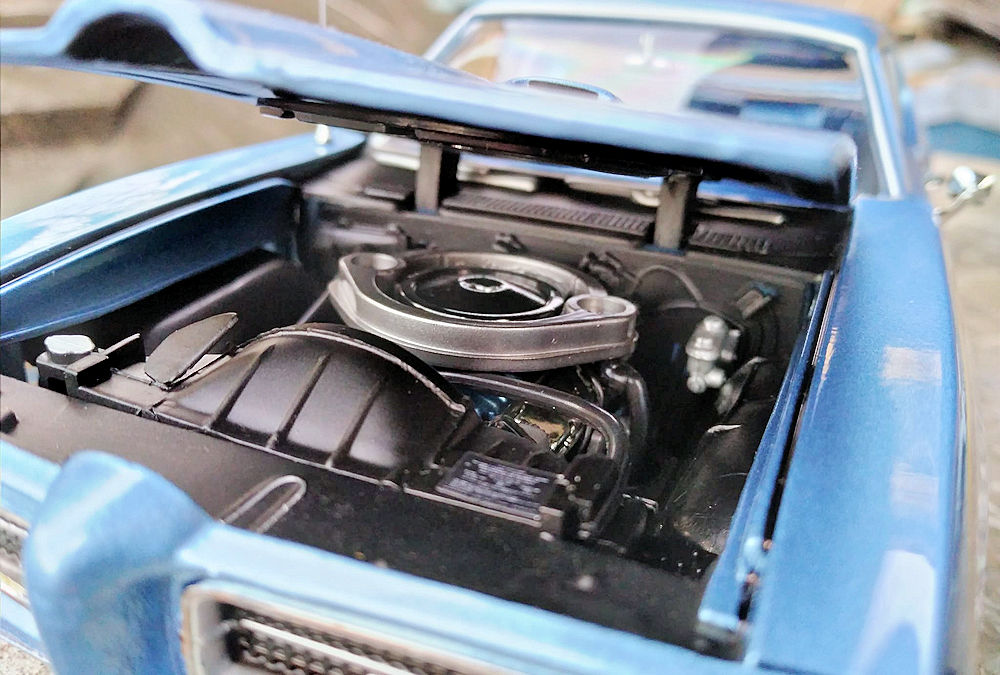 Yes, it’s still got those primitive “dogleg” door hinges, the trunk lid doesn’t open, the external details are somewhat heavy-handed though not unacceptably toy-like, and those hood and door shut lines are somewhat ungainly. Despite these shortcomings, the added features on recent variants such as greater details in the now fully wired and plumbed engine bay, multi-media interior with “soft feel” textured seating areas and flocked carpeting plus a deeper, more vibrant paint finish and intricately reproduced road wheels, raised white letter tires and the necessary graphics including an elaborate 1969 motor vehicle emissions tag on the radiator cowl represent a quantum leap from the variants produced in the Nineties and the early 2000s. 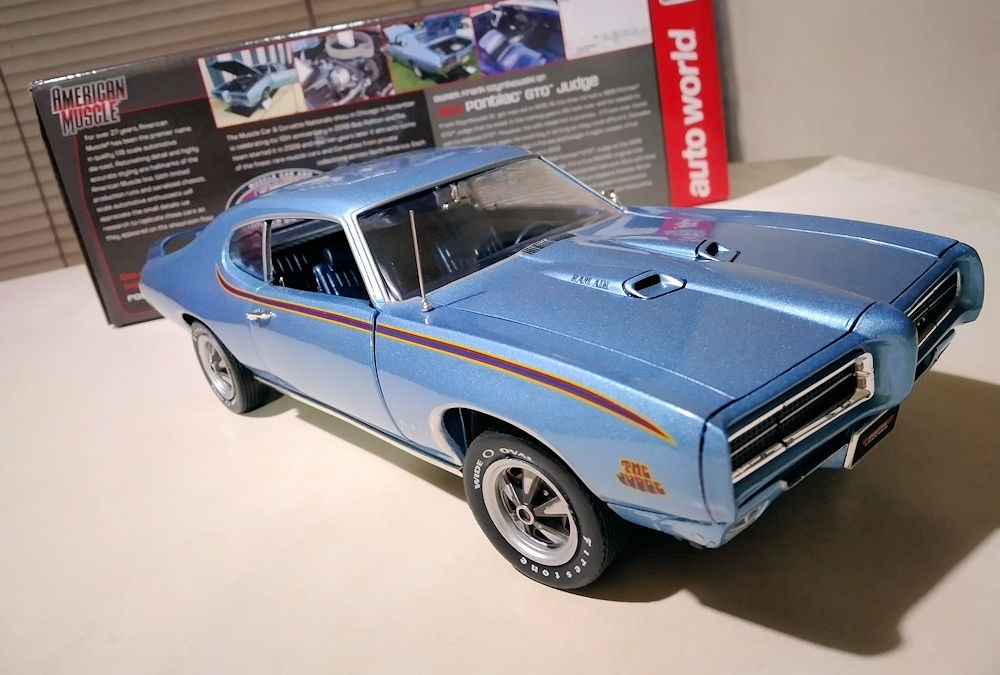 All these improvements and refinements have undoubtedly given new meaning and purpose to the original Ertl American Muscle ’69 GTO casting, and the end result is proof positive that when a model is DONE RIGHT, it can continue to represent outstanding realism, accuracy and detail as it benefits from leading-edge design and production technology.