In this horse power crazy car world of the last years, one car that certainly does do its part is the Chevrolet Camaro Yenko. A limited-edition of the Camaro with some serious power output that makes the words ‘muscle car’ very justifiable. For the lucky ones that own the real car, there are two stages available. Stage 1 with 825 HP and stage 2 with a staggering 1000 HP. The model under review today is Stage 1 of the 2018 model year, finished in black with silver striping.

The model is made by the American model maker Auto World. For collectors unfamiliar with the brand, they make full opening die-cast models of various American cars, most muscle cars, both classics and modern ones. The prices (based on the European market, where I’m from) are mid-range, at just above 100 euros. To put that in perspective, that is about half the price that AUTOart asks for their regular models here in Europe, but nearly three times the price of a base model like a Maisto. 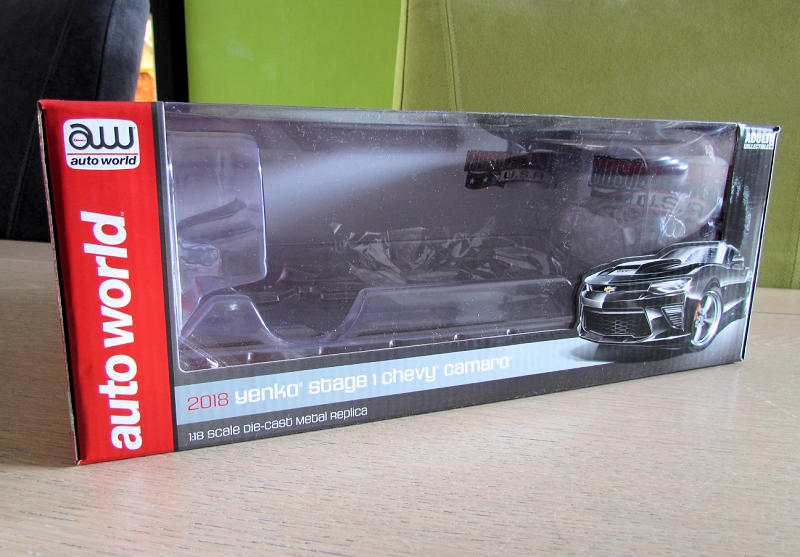 As this is the first review of a model from the brand, let’s start with the packaging. The package is nothing over the top and a typical display box like so many brands deliver their models in at this price range. It does the job it needs to do, keeping the model safe when packed and transported. The model is kept secure by a plastic inner box that does a proper job of keeping the models form moving inside the box. There is no base plate with the model and no screws holding the model in place.  On the back of the cardboard box is some info written about the car and the model, nice detail! 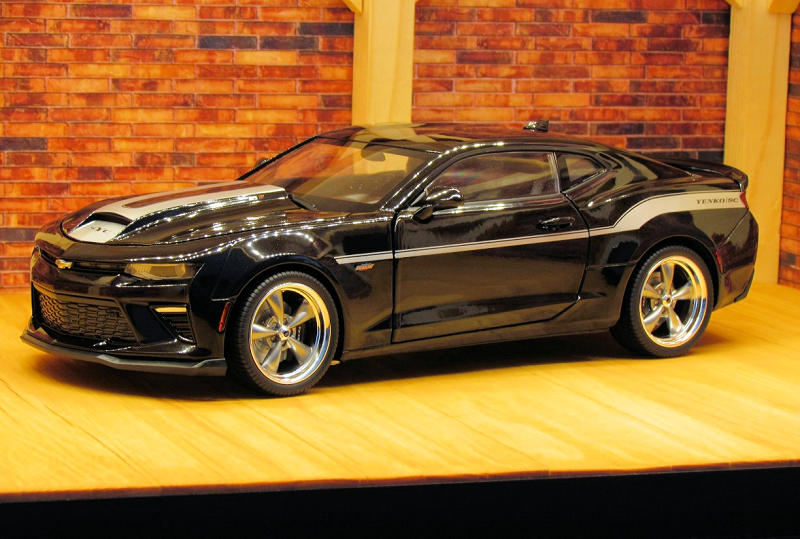 The first thing that you notice when taking the model out of its box is the sheer weight of the model. As said before, it is made from die-cast metal and it sure feels that way. When putting the model down on the table you will notice it has fully sprung suspension. Nice detail Auto World!

When looking at the model from a distance, and comparing it with photos of the real car, the shape seems good and thru to the original. The stance of the model also looks good, although maybe the suspension sits a little bit high. I think that the last point will probably solve itself over time due to the sprung suspension and the weight of the model. 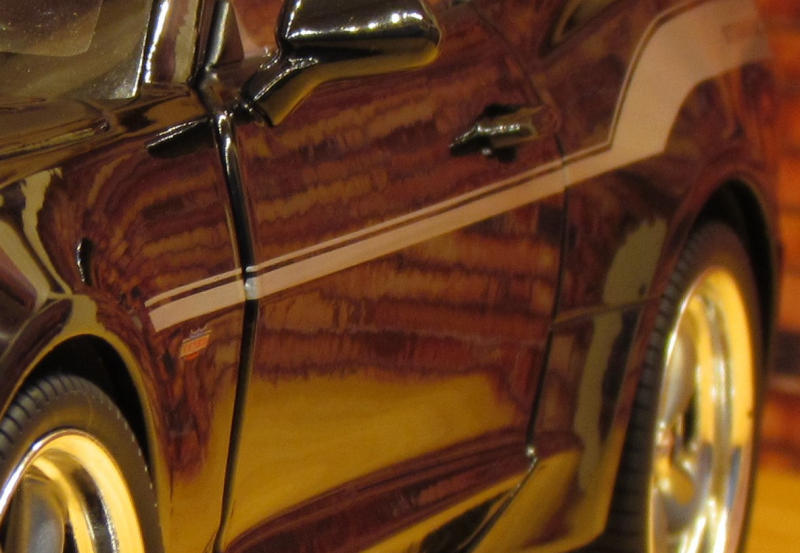 Coming closer to the model, we start looking at the paintwork first. And I’m sorry to say, this is not where this model shines, both literally and figuratively. The first thing I noticed is that there is some oily substance on the bodywork. I have no idea why maybe some type of paint protection? Luckily it’s easy to clean off. Then the paint itself, which has a deep black, non-metallic, colour. Unfortunately, there is a lot of orange peel visible, even from a good distance, and also the paint hasn’t got a good shine to it, especially under certain angles this is very noticeable. Almost like a car from which the paint has faded over the years. I noticed some dust in the paint on the boot lit as well and on the front right corner are some strange smudges, like someone touched the paint while not fully dried yet. It will polish out I’m sure, but it shouldn’t be there on a new model.

The striping on the bodywork looks to be sprayed on. This is visible on the front edge of the bonnet (or hood in American English), where the line is not sharp like some paint has gone under the masking. Also on the rear panel on the driver side, there is something that looks like silver overspray. At first, I thought there was some dust in the paintwork, but you can’t feel it, and it’s only on that part of the model.

On the bonnet, boot lid and side panels are some ‘Yenko’ or ‘825HP’ badges, which look like decals. They look sharp and are placed nice and straight. So no complaints here as photo-etched parts are not to be expected at this price range. The Chevrolet badges on the front and rear are painted plastic and look decent, nothing more, nothing less. 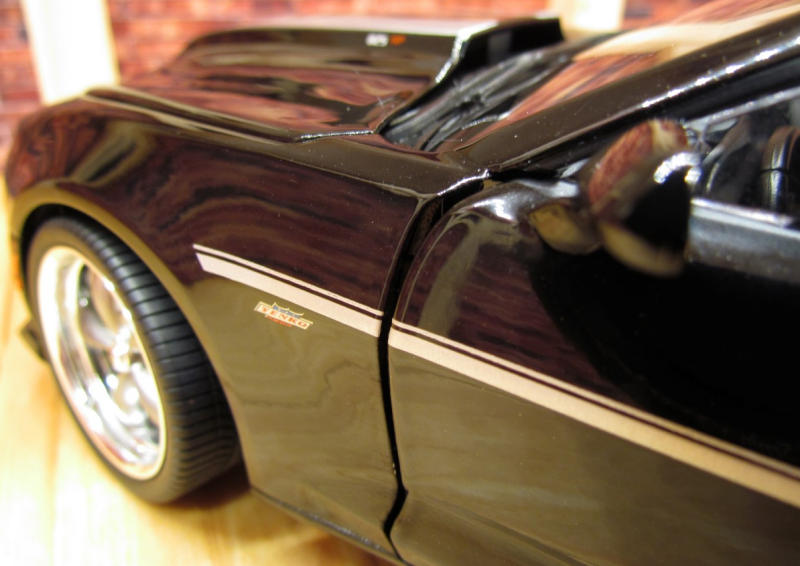 Moving on to the panels and their fitment. As said, the model is full opening. The panels gaps on the bonnet and boot lid are more or less consistent and not too big. I’ve seen models that do better, but also have seen (a lot) worse, so no problems here. The fitment of the doors though is not as good. The passenger side is acceptable, with a slight inconsistent gap at the front, but the driver side door doesn’t close flush with the front fender. So when looking at the model from certain angles, you notice the door sticking out, especially at the top near the side mirror. Even at this price point, this should be better. All the windows are correctly positioned and flush with the body. 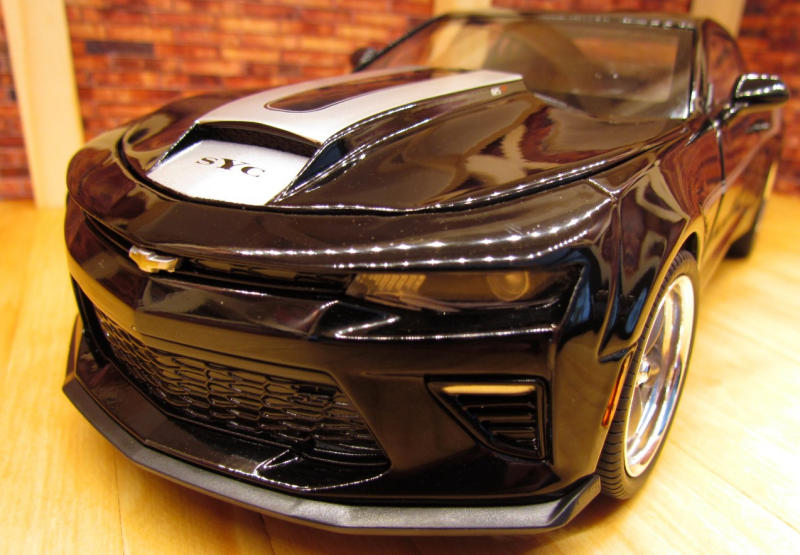 Then we move over to the front of the car, which is dictated by a huge grill and rather slim headlights. First, we look at the headlights, which are decent. The only point of criticism is the visible pins that hold the ‘glass’ in place. Under the headlights, we find very slim fog lights. On the model this is a stripe of silver paint, that should represent a fog light. It’s not convincing enough. Speaking about not convincing enough, we take a look at the grills. They are massive and Auto World executed them in solid plastic. As these dictate the front look of the car, it’s a real let down. 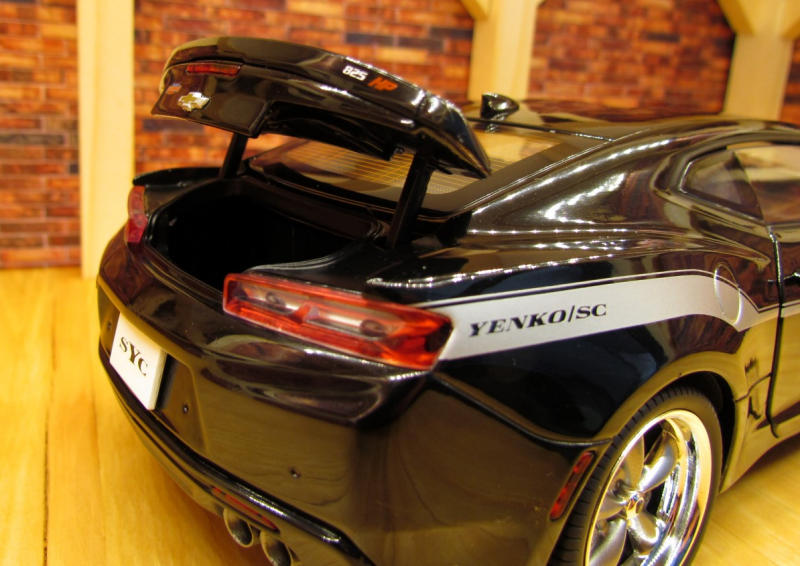 Then the rear of the car, starting with the rear lights. It’s the same story as the front light, only in this case, the pins are way more visible. They are in the middle of the lights, and almost fooled me for being the light bulbs, but looking at the real car’s rear lights, there shouldn’t be anything. Moving down, under the rear bumper are four big exhaust pipes, as found on the real car. They look very nice and convincing.

As we follow the exhaust under the car and turn the model over, we see that there is a lot to see, with the drive train, exhaust and suspension bits all there. That is something that is not as common in this hobby as it once was. Very good work Auto World! 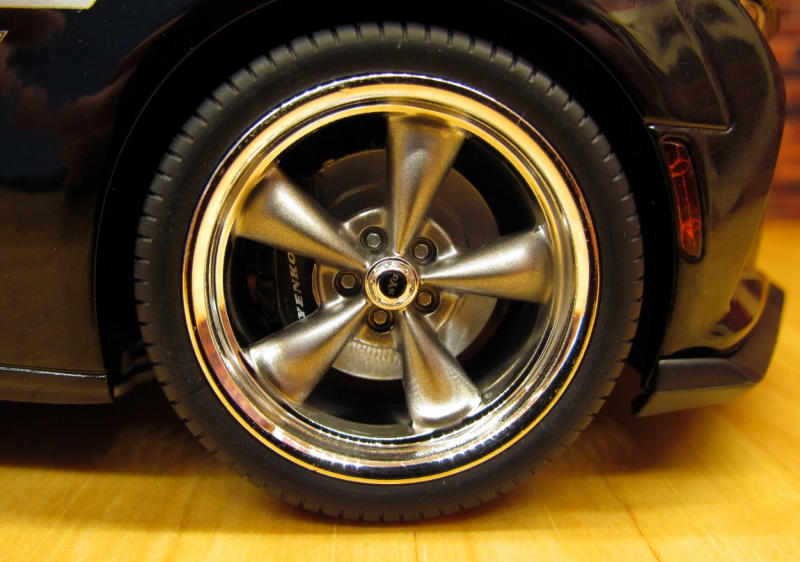 One of the most important parts of a car is, of course, the wheels. And there is a lot of it on this car and I’m happy to tell you, Auto World did a good job here. The wheels look nice and sharp, with decent chrome work on the outer parts of the wheels. The tires are made from rubber and are lacking any branding, but at this price, I wasn’t expecting any. The brakes look okay. The brake callipers have a valid Yenko decal on them, the discs themselves could have had a more convincing look with some paint. They look a bit plastic. 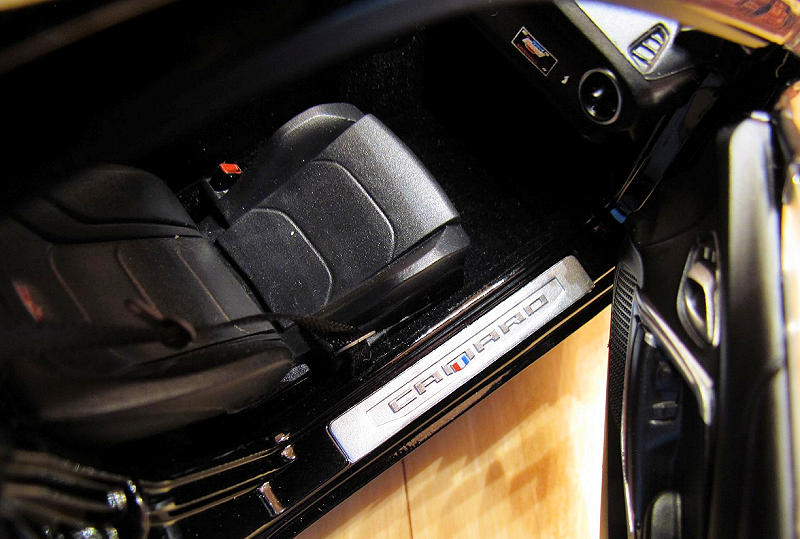 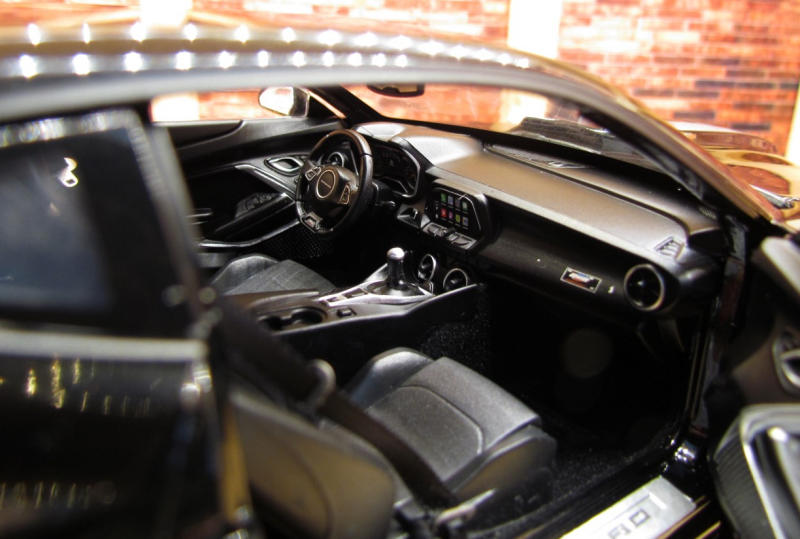 Time to open some of those panels. We start by looking into the interior. Both doors open and close without any problem and open far enough for a decent look into the interior of the beast. Also no dog legs here, but proper hinges. Good job! Looking further into the interior makes one smile. It starts with the nice door sills and you immediately notice the fabric seat belts and full carpeted floors. Also, the dashboard is very sharp and nicely executed, with good instruments and other decal work. Also, the silver paint around the vents and on the doors panels are nice and crisp.  If there is one point of criticism it’s the seat, which looks a bit too plastic. Some texture in the casting or paint on them would make the interior near perfect. Overall good job on this section Auto World!

Moving over to the rear we open the boot (or trunk on the other side of the ocean). You will probably open this once and never open it again. Nothing to see here, apart from doglegs. No flocking present, just bare plastic. I guess some cost-cutting went into this section of the model. Also, the boot lid would only stay open for a minute or two, before it slowly closed on its own weight. Like the model knows there is nothing to see here. 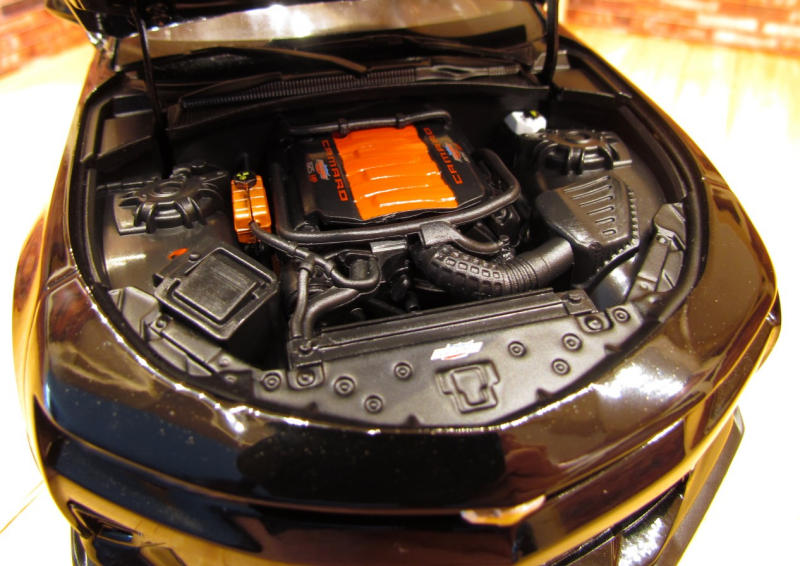 Keeping the best part of the Yenko for last, we open the bonnet. The operation is flawless, but, although small, doglegs are used. No nice hinge work here, unfortunately. The engine itself is admirable, with tiny decals adding to the realism. The engine bay looks okay, most of the parts are there. The result is not bad, but the overall look is a bit too plastic for my taste. The air filter housing, pipework, cooling lines, cover plates over the radiator and inside of the fenders are all bare and black plastic. This whole engine bay would completely transform with some additional paintwork. 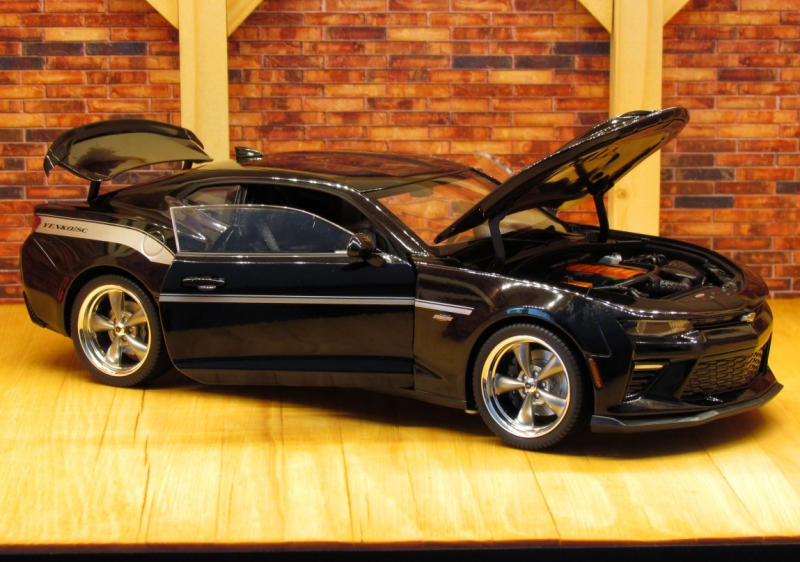 So what do I think of the Auto World Camaro Yenko stage 1? Well, I have mixed feelings. Giving the price point it does not prove well.  To expect perfection, we cannot and it is impossible to compare to brands like AUTOart. It is also not possible to compare to brands like Maisto, which cost about 1/3 of the price here in Europe. It is somewhere in the middle. For me, the real let downs are the paint and the front grill. The grill is a point you can discuss whether it should be perforated for this price, but the paint is worse than the aforementioned Maisto models. I own a 1967 Auto World Camaro as well and that has far better paintwork, so Auto World knows how to do a proper paint job. I have decided to keep the model and at some point disassemble it, improve the paint, replace the grills with a proper one and add some additional paint to the engine bay. It’s a solid foundation with less than solid execution. It’s a real case of what could have been.