The Aston Martin DBS was a slightly sportier version of the DB9, more in looks, less performance-wise, so that Jeremy Clarkson once suggested calling it the DB9 S. It is more widely known for being driven by Daniel Craig on her Majesty´s Secret Service, wrecking his company car as usual, first in “Casino Royal” and then again in a spectacular car chase in “Quantum of Solace”. Probably, like myself, many were waiting for AUTOart to add the DBS to its own range of Aston Martins. God knows why that never happened despite AA making practically every single other Aston Martin. So the Bond franchise DBS remains the only option. Now Auto World has thrown in the second DBS after Ertl´s Casino Royal light grey one. Let me tell you in advance: They´re the same, just different shades of grey, made for those who are willing to pay for pain. 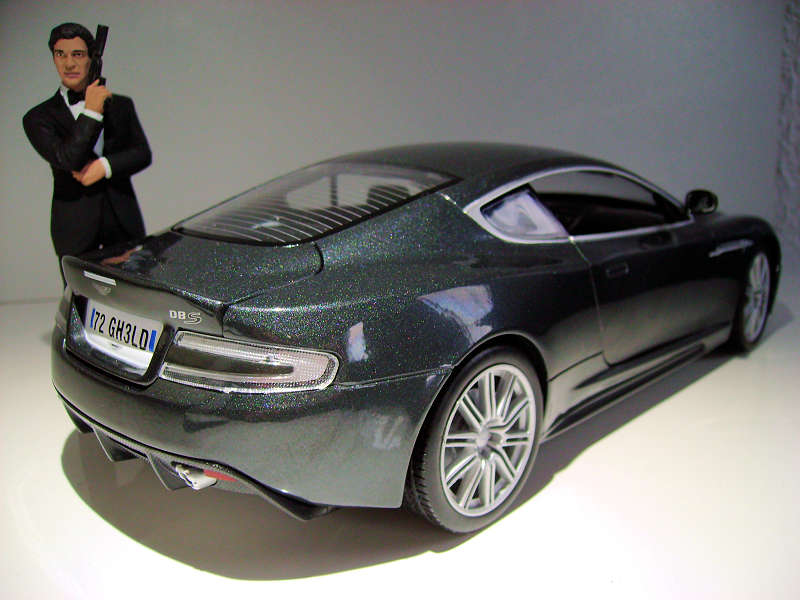 A decent paint job is about the best thing you can say about it. In all other respects, even a half-the-price Welly DB9 is the better model: In contrast to 007, this at least has windows on its doors. Don´t worry about the door mirrors; you can thrash the car around an Italian puddle in your garden, they won´t break off, they´ll bend any direction, being made of rubber- just like the seats inside that have a racing harness moulded into its surface, with a cheap carbon imitation on its sides. The dash is cheap hard plastic and moulded plastic carbon imitation on the centre console with an open glove box displaying a pistol. 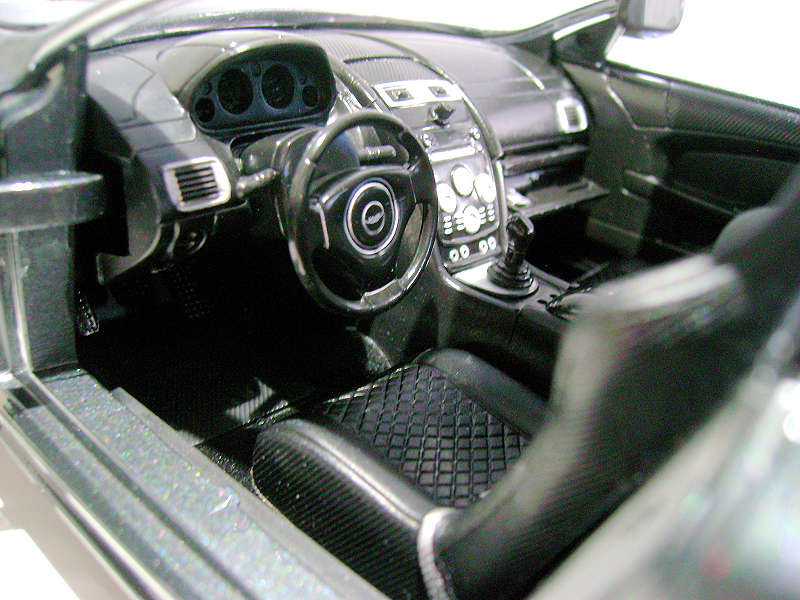 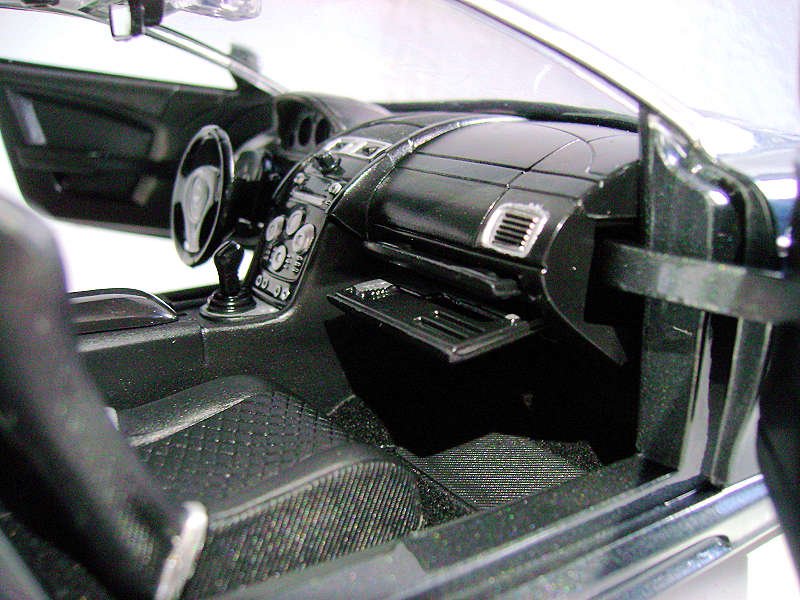 The hood has the Aston wing badge too far back, not on the front edge, where it belongs. All of the numerous air vents, grilles and air intakes around the car are solid plates, all the lights show unseemly mounting clips. The two lower reflectors on the rear end are merely part of the moulding painted in red. At least a DBS badge was added on the boot in which Mr. White won´t find the comfort of a carpet. The DBS´s distinctive chrome bar across the rear is completely absent, though. The rims are ok, but the brakes discs and calipers are toyishly simple. Under the hood, some more effort has been made by adding some cables to replicate the V12 engine. 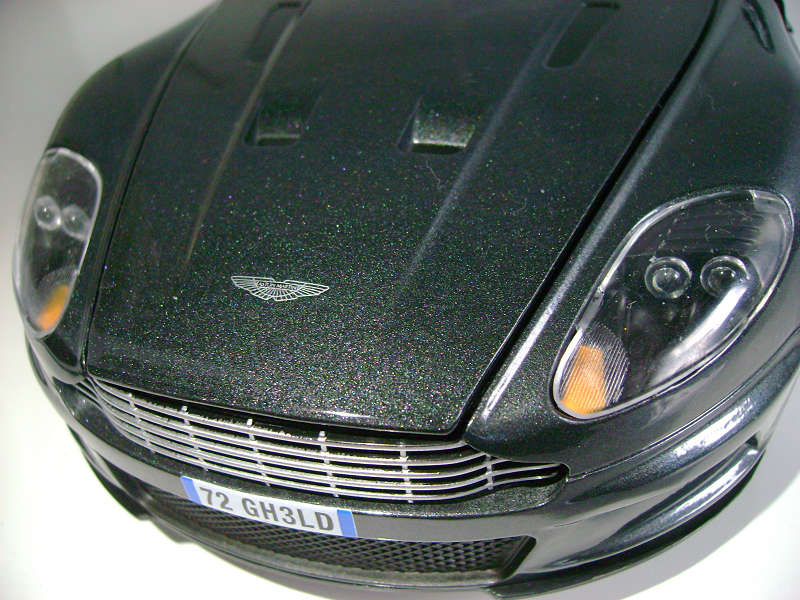 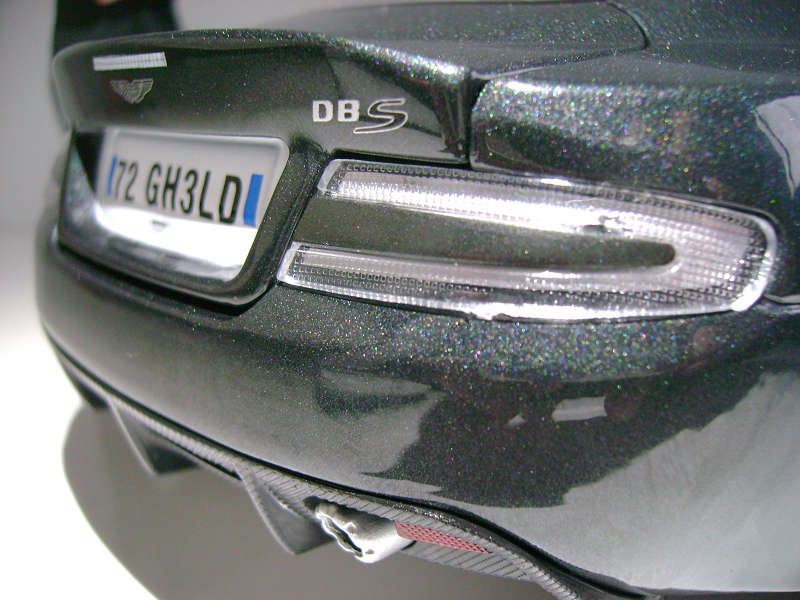 The whole model looks as if it has been made by Q knowing exactly that it’s not worth the effort because it will get smashed up by Bond anyway or by a manufacturer who knows that Bond enthusiasts will buy it anyway – even later when prices treble. So if your theme is collecting every Bond car from every movie, go ahead. If you feel tempted to rip the door off and scratch the paint to modify it into the battered film car, why not, it only adds realism, where most enthusiasts would cringe about doing that to a (model) car. If you are looking for a good replica of one of the best looking Aston Martins ever, beware, this is not. The fact that this is sold for more than 100 Euros while the Norev 500 SL is 85 somewhat puts it into perspective. You´re buying into the Bond franchise, not true to the original model manufacturing. In every single aspect, the Welly DB9 is the better model.