It took a while, but finally, the long-awaited AUTOart made 1:18 scale Lamborghini Aventador SVJ has arrived in my collection, the first shade released is called Giallo Tenerife, and it’s a rather special pearl metallic shade of yellow, previously not used by AUTOart.

The Aventador SVJ, which in the Lamborghini roam stands for Super Veloce Jota, loosely translated into super fast racecar, because back in the day, the J came from Appendix J in the racing rulebook, remember the Miura Jota? That was the first Lamborghini to use this important letter, which many years later returned on the Lamborghini Diablo SE30 Jota, a modification of the limited edition Diablo SE30 intended for racing, but that never materialized. 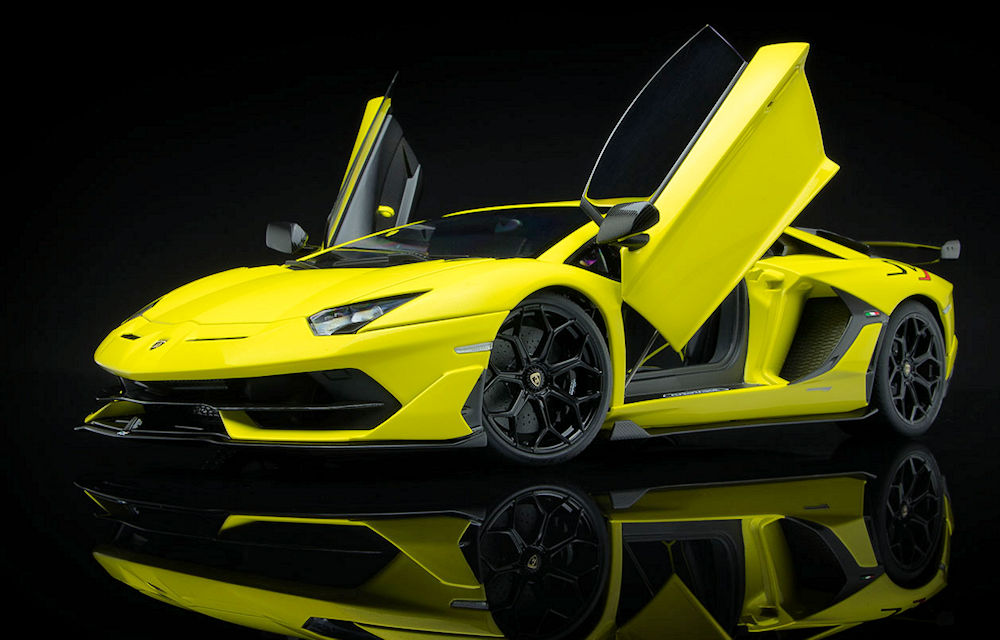 In 2019 the Jota moniker returned to Sant’Agata to adorn the top of the line Aventador model, the successor to the impressive Aventador SV, and while the SV was the super sport version of the Aventador LP700-4, the SVJ would be a similar model but based on the facelifted Aventador S, the SVJ would also become the first V12 from Sant’Agata with ALA, the Active Lamborghini Aerodynamics.

In the front bumper, and underneath the massive rear wing, Lamborghini fitted flaps that could be opened or closed depending on conditions to actively alter the airflow around the car, creating, or decreasing downforce when needed, to this extent the Aventador SVJ also came with a roof scoop… only Lamborghini moved it onto the engine cover just in front of the center rear wing strut. 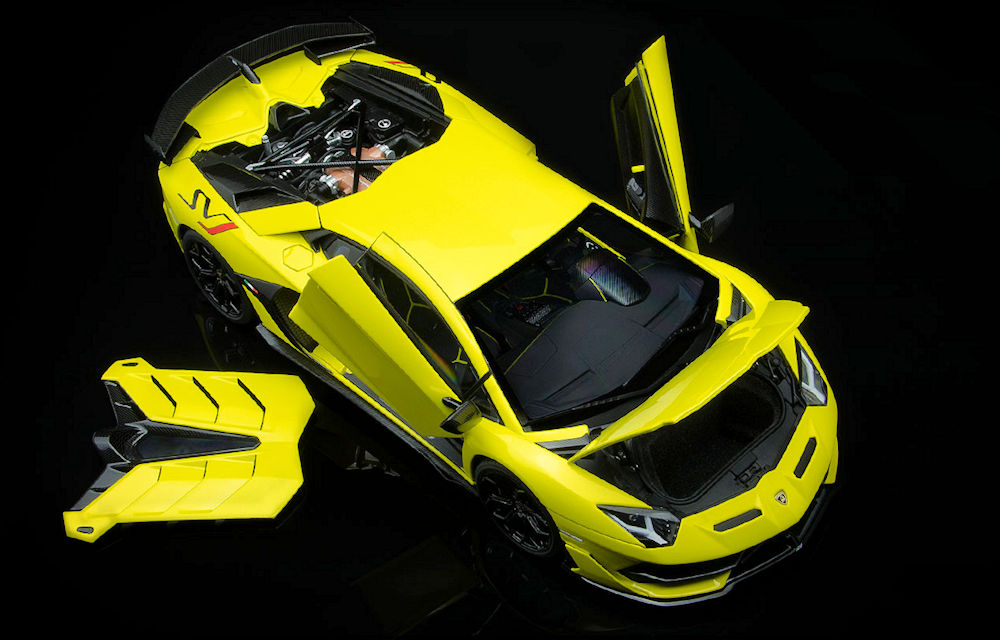 The Lamborghini Aventador SVJ set a new world record for production cars on the famous Nürurgring-Nordschleife track in Germany at 6:44.97 minutes, it has since been broken again, but still, the SVJ held the crown on the Green Hell for a while, and the introduction shade on this car was green, a satin metallic green which AUTOart is releasing later this year.

The order book on the Aventador SVJ filled up very quickly, and all 900 units sold out quickly despite an MSRP of €350,000 in Europe and $518,000 in the USA, before taxes and options, fortunately, these scale models are a little cheaper to buy.

When Automobili Lamborghini SpA held their dynamic unveil of the Aventador SVJ, there were a few different shades and colour combinations available for journalists and possible clients, these all came with their special, in-house designation. Giove was one of those ‘market introduction’ colour combinations, boasting a Giallo Tenerife exterior, and this is the model AUTOart replicated in a 1:18 scale with this release, so now you know why this isn’t Giallo Orion, this is a near-perfect rendition of one of the actual demo cars the factory built in a pre-production run. 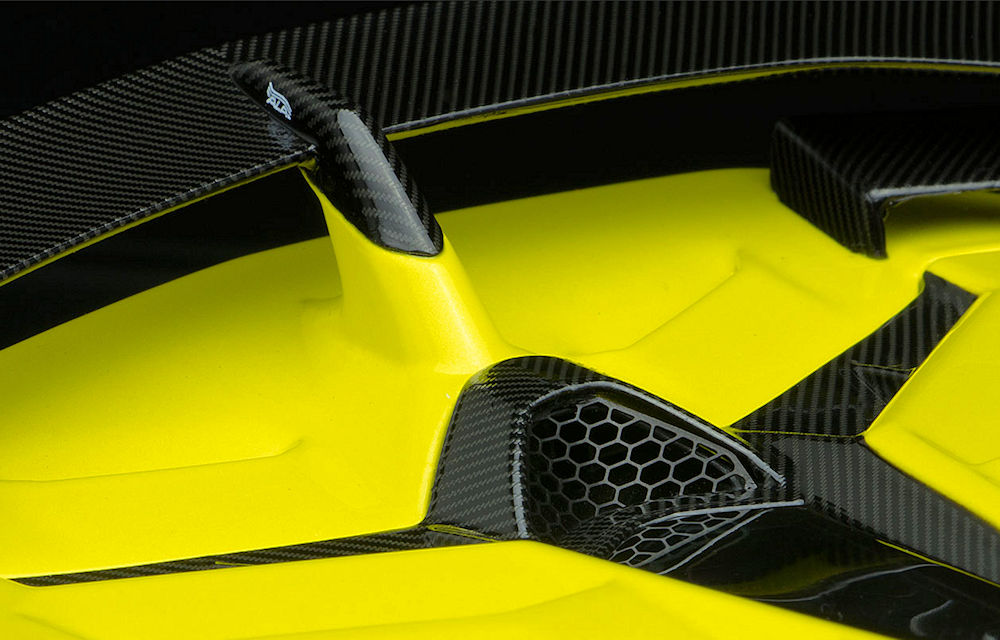 This specific configuration came with the optional Leirion wheels finished in glossy black over black brake calipers, exactly like this AUTOart model, the real car also came with the carbon fibre exterior pack: mirrors in visible carbon fibre, the lower side skirts in carbon fibre, the Y-shape on the engine cover and the air intake surround, all in shiny carbon fibre, just like the massive rear wing and the fixed air intakes above the rear wheels and the smaller ones behind the side windows.

AUTOart even got the horizontal fin in the front bumper correct, as it’s also showing visible carbon fibre, just like the rear diffuser, while all the other dark sections are glossy black, which is also identical to the real car, just like the black SV and the red J, the standard colour setting from the factory. 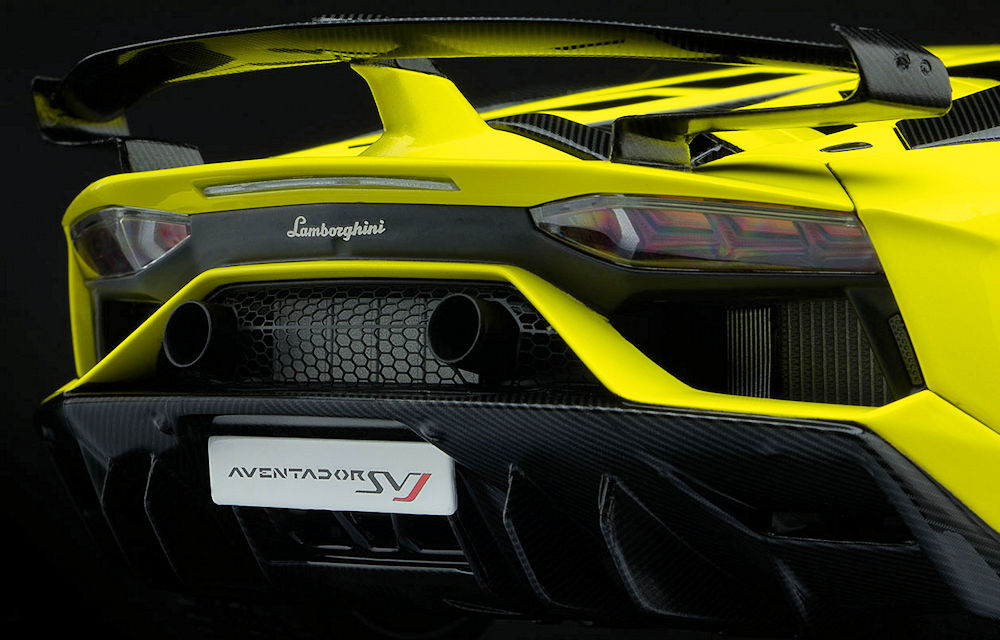 On the exterior it seems AUTOart got it perfect on this model, the grilles are present, the black exhaust tips are there, the ALA script is put where it should be while on the side we find the small Aventador SVJ script on the side sill in front of the rear wheels, even the Tricolore sits proudly on the black section of the side air intake… this is just perfect.

But then we get to the interior, and while this AUTOart model boasts a really nicely detailed interior, this is where they dropped the ball on creating the perfect Giove replica, some important options are just missing here, which is very unfortunate, to be honest, I just hope the Verde Alceo version will be perfect instead. 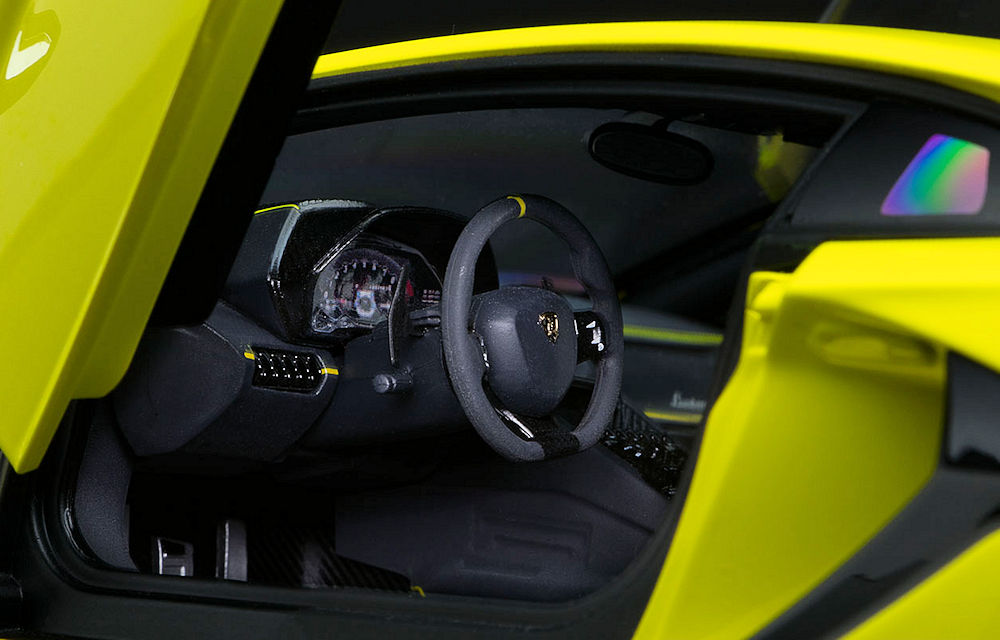 First the good news, AUTOart did get the seats right, these are the carbon fibre lightweight sport seats, standard fitment on the Aventador SVJ, and while not the most comfortable for a longer drive, these just belong in the Super Veloce Jota version, if you want comfort, buy an Aventador S.

The yellow piping on the seats is also correct, as are the Y-shaped inserts on the back and lower part, AUTOart even put a yellow Raging Bull on the headrest, and the all carbon fibre door panel comes with a yellow pulling strap… so far so good, but now comes the problem: the Giove demonstrator came with the S-Style stripe on the dashboard and on the outer bolsters of the seats and headrest surround…  AUTOart completely missed that detail, sure there is piping on the bolsters, but the entire bolster should be yellow. 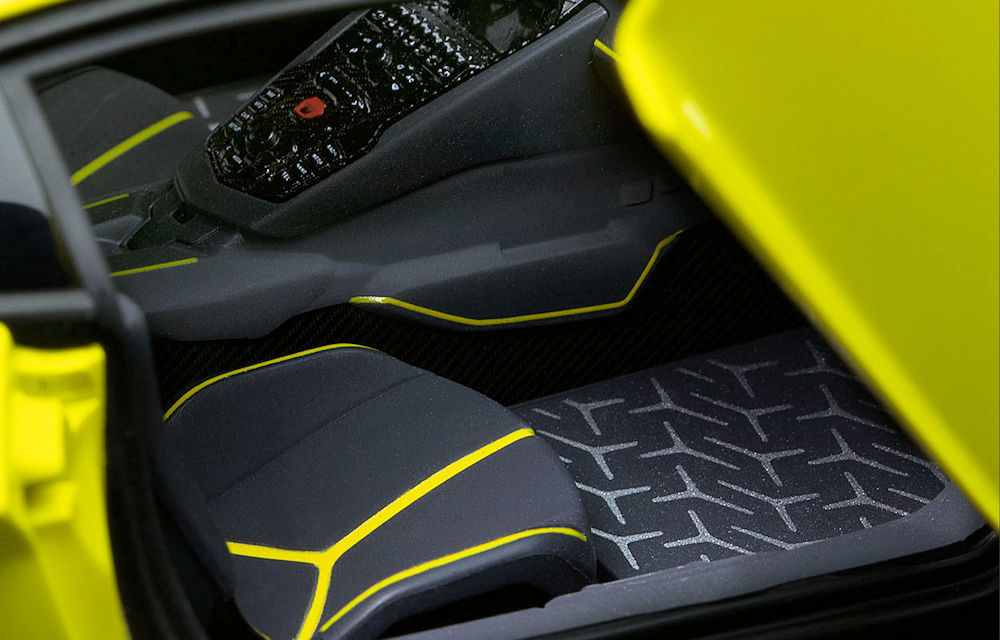 AUTOart did put a very nice, yellow cross-stitching pattern on the dashboard edge, but it should be a wide yellow line instead, easier to apply, and there isn’t a yellow line underneath the Lamborghini logo on the dashboard of the real car, also the ‘pocket’ behind on the central armrest was also yellow on the demo car, the carbon fibre floormats found inside this model are correct in white on the other hand.

That carbon fibre central console and dashboard pod, with the thin yellow line on top, is also found inside the real Lamborghini Aventador SVJ Giove edition, so it isn’t all bad news for this AUTOart interior, and don’t get me wrong, this interior is perfectly possible in real life too, but as they opted for this special shade of yellow and got the entire exterior perfectly right, it would have been great to see the same effort on the interior too. 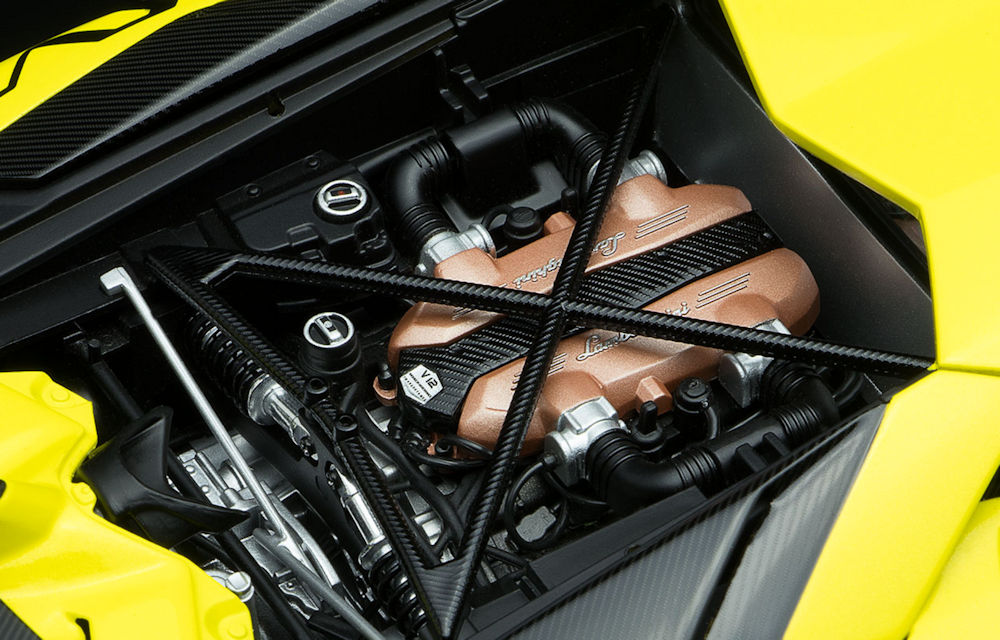 The massive V12 engine under the ‘lift-off’ engine cover is another work of art by AUTOart, with the bronze/gold painted manifolds, when compared to the real car it just looks amazing, this model comes with the standard black suspension springs, but that’s correct to the actual car, so no issue here. 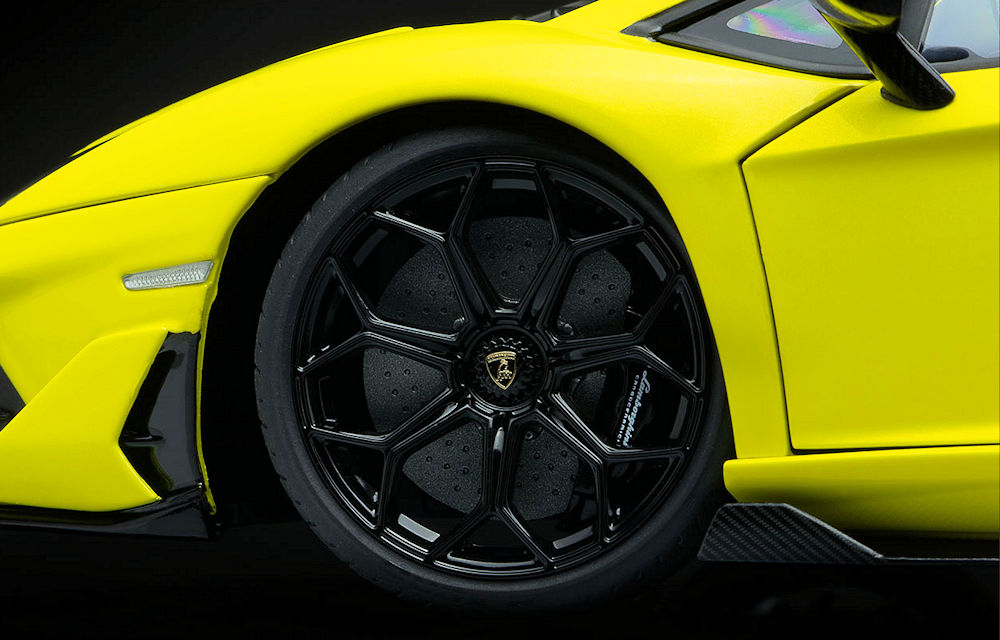 I posed this new SVJ next to my Aventador LP720-4 50th Anniversary in Giallo Maggio and the Aventador LP700-4 Roadster (which should have been Giallo Orion but mistakenly got painted Giallo Maggio by AUTOart), and the Giallo Tenerife has a slightly more greenish hue to it, hardly noticeable on a photo, but in real life, you see a tiny difference.

So is this a must-have model for your collection? I would have to wait and see the other shades, but going with my feeling at this time, I would say the Verde Alceo is really THE must-have being the press release car, and the show car used to unveil the Aventador SVJ, and so you’ll have the two different wheel designs, the Viola Pasifea with the Nireo wheels might be a great looking one too.