Rare is certainly what Special Edition Diablos for Lamborghini´s 30th anniversary was meant to be, with only 150 built. Even rarer are those fitted with a Jota upgrade package, with only 28 Jota kits ever produced and yet fewer fitted to the cars. How many exactly is under debate, probably only 12 kits were installed directly in Sant’Agata from the get-go, others as later upgrades of “ordinary” SE30s. The almost 600 horses propelling the car to 60 mph/100 kph in under 4 seconds and up to 211 mph/ 343 kph were spectacular, the roar deafening … and hence not road-legal in most places. Given the rarity of the real thing, it makes you wonder whether AUTOart´s balloon white and red interior model of the Diablo SE30 Jota is a fantasy or a replica of an existing vehicle. 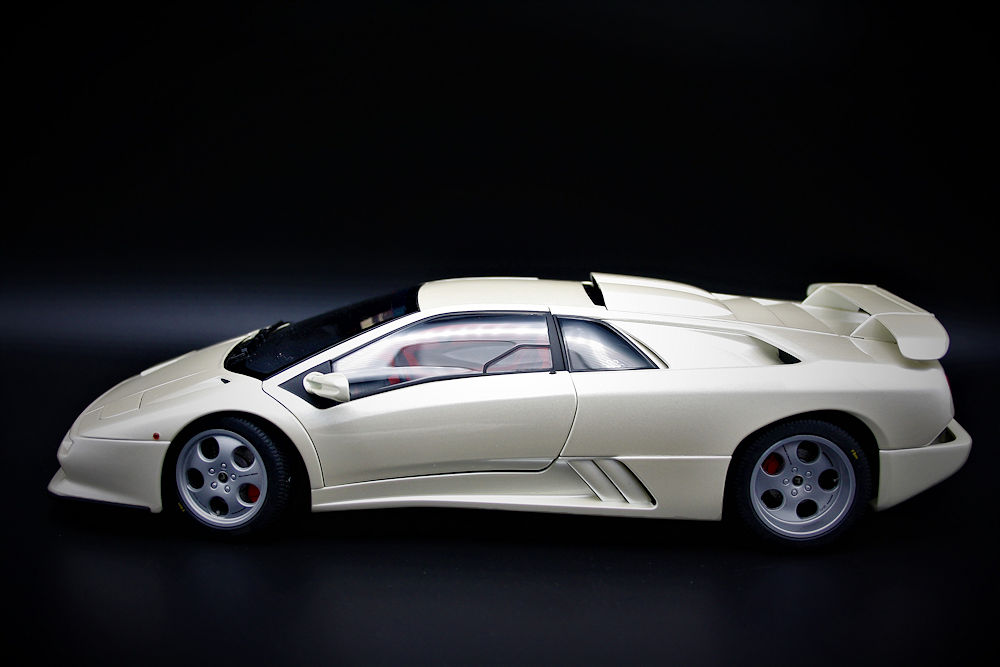 “On the outside the Jota kit consisted of a new, redesigned engine cover featuring two large air scoops peaking above the roof, pulling air onto a pressure plate that was mounted on top of the engine manifold”, which is exactly what we find on the model. My pictures don´t do the pearly white paint job justice, but believe me, it does have the mother-of-pearl effect. On the rear, the Diablo has the “30 Special Edition” badge, the raging bull badge and a Lamborghini script facing upwards underneath the wing, but no Jota badge. However, that needn´t be wrong as it was optional and could be deleted. The rear lights have a nicely opaque transparency to them and the red-ringed quad-exhaust tips aggressively bend upwards from underneath the rear. 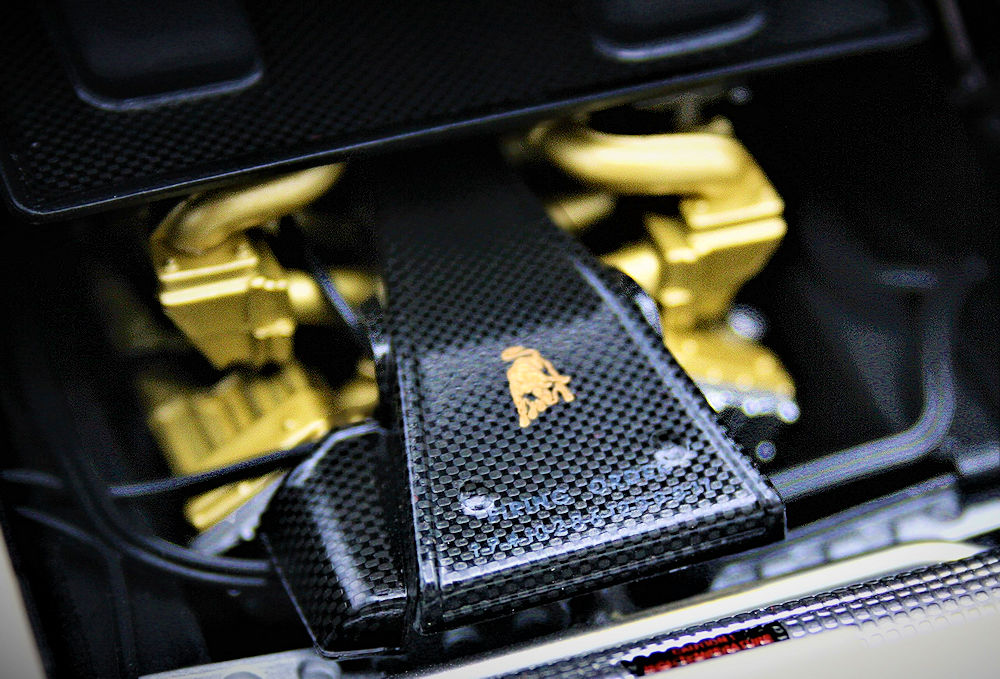 Underneath the engine cover lifting on struts, you can find the golden upgraded V12 engine, with all too orderly cables and a carbon-engine cover featuring a golden bull and the firing order. Amazingly this is the exact same firing order as in a balloon white Diablo SE30 Jota recently sold in the Netherlands, which might be a clue of this model being the exact replica of it. It would be interesting to learn whether AUTOart´s other colour options have the same firing order. 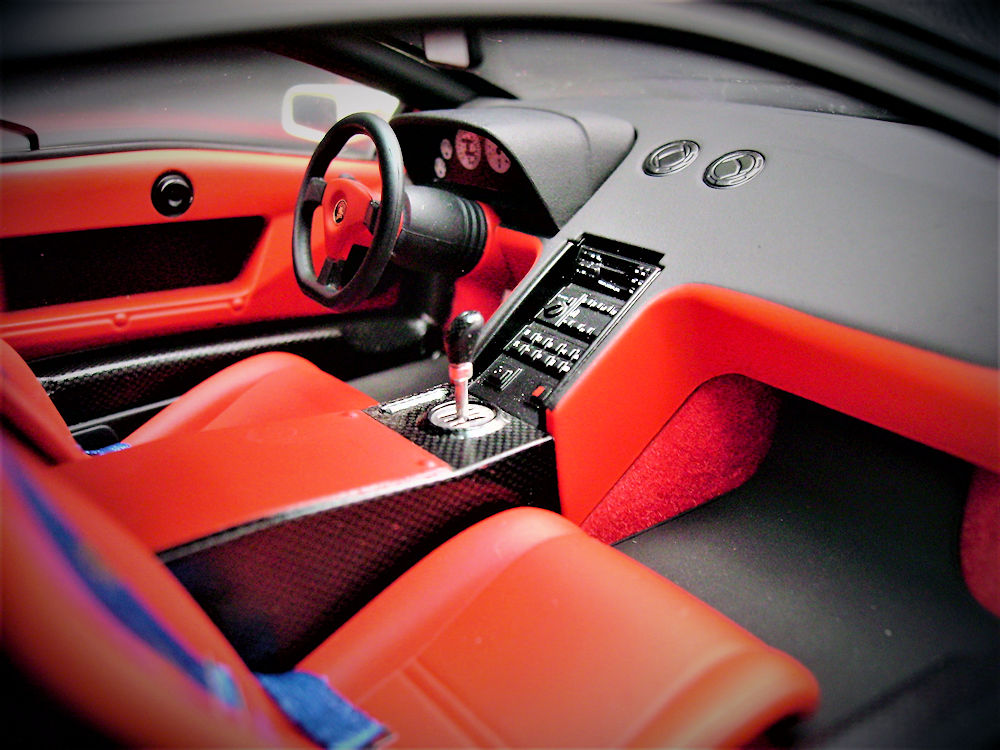 Moving on to the interior, lifting the well-closing signature scissor doors on struts with ease, you find the red interior that the Dutch car has and a four-point-fabric-harness with 30SE markings nicely contrasting with the seats in a carbon tub. A difference to the Dutch Diablo is that the model does not have red carpeting behind the seats that look more utilitarian on the real deal. But all in all, it fits its spec rather closely. Buttons on the centre console look almost sterile, but have markings for their functions printed on them in white. In the little window behind the driver´s door, you find the Special Edition plaque that states the chassis number of the car. Zooming and squinting it reads 022/150, and hence betrays that this number does not match a balloon white, but comes back as a purple on blue Diablo 30SE Jota and will most likely be found on the AUTOart´s purple variant. It does not surprise that AUTOart has carried over the correct chassis number of this Jota kit no.1 on the 30SE´s signature colour to its secondary choices instead of tooling their individual numbers for each, but it disappoints a little nonetheless. 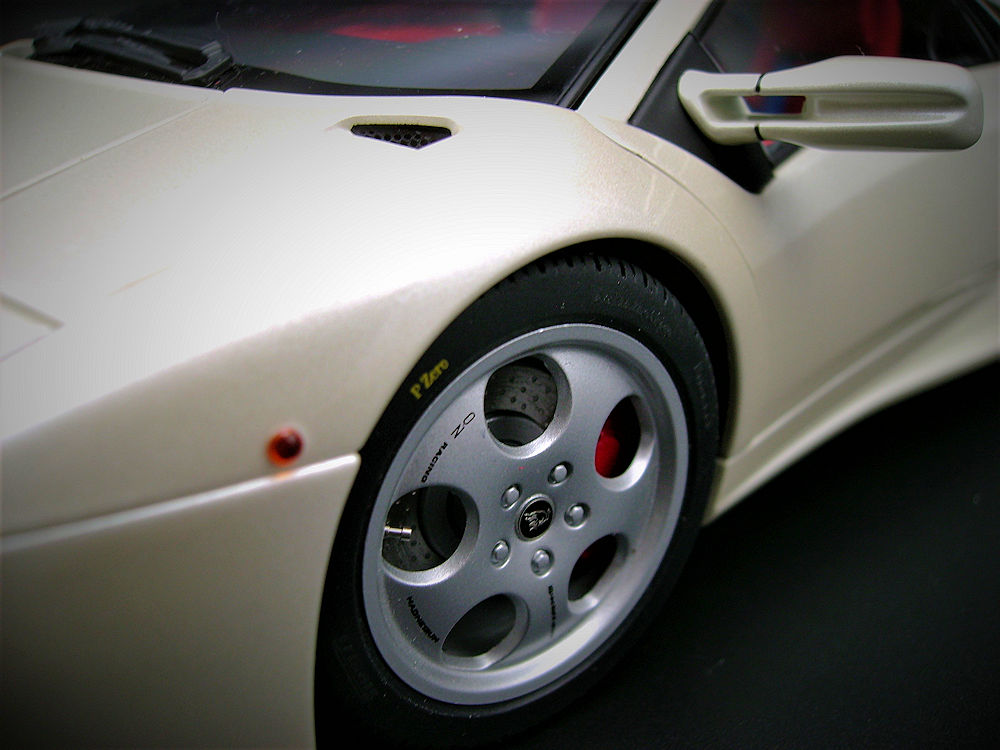 The wheels are very nicely detailed with scripts on the Oz-rims, tire markings for the Pirellis and the valves that have become standard now on upmarket models. The door mirrors strike the observer as nicely sculpted true to the original. 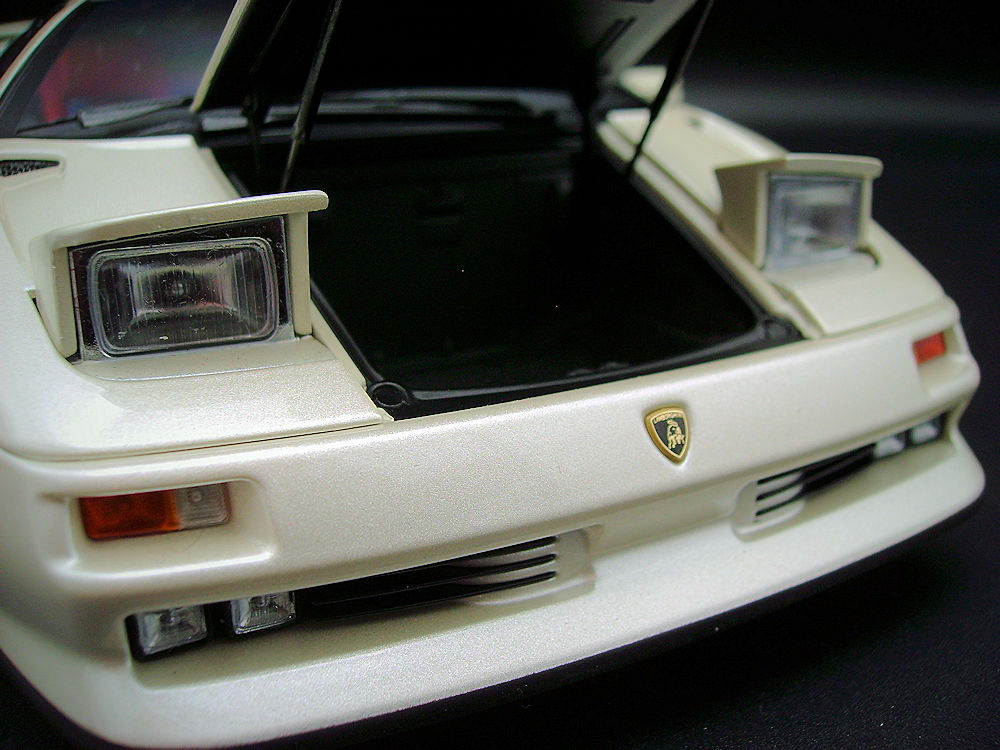 Upfront we find a frunk opening on struts again, completely empty. The tiny air-intakes on the sloping front have breakthru-photo-etched grilles. A detailed Lambo-badge correctly faces forward instead of sitting on the upward slope on ordinary Diablos. A little switch underneath the front makes the headlights pop up and down neatly and they as all the other lights up front have little light bulbs in them that may be mistaken for ugly mounting pins on lesser models. What is different from the Dutch Diablo is that the four fog lights ought to be round, not square and no lenses amber, but transparent, including the little indicator pins on the sides. 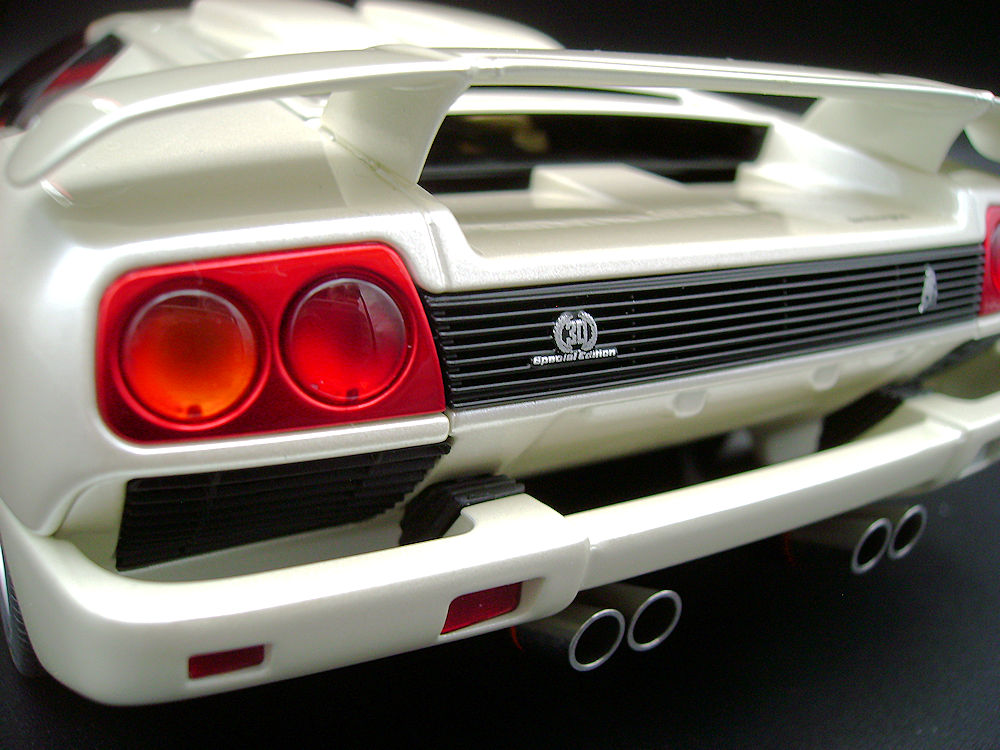 So all in all, this model is definitely one of the nicest colour options AUTOart offers for this Lambo, while probably the historically least accurate of them. Laudably, AUTOart manages to sell the Diablos not crossing the 300 Euros threshold, which will surely be welcomed by all the collectors who had to wait for almost 30 years for this 30-year-anniversary Lamborghini.