Back in 2013 Lamborghini needed something special to draw attention at the Geneva Auto show. In 2011 they introduced the stunning Aventador LP700-4 to succeed the aging Murciélago, while a year later, in 2012, all eyes were drawn to the one and only, the Lamborghini Aventador J finished in the dark red metallic shade and boasting a roofless design. Only one unit of the J would be built and it was sold even before it entered the stand in Geneva, for €2,200,000 before taxes.

For the 2013 Geneva Auto Show, Automobili Lamborghini SpA came up with something even more radical than the Aventador J. How about a 750hp, LeMans-inspired race car based on the Aventador, but so different, and street legal. They only wanted to build 3 units, priced at €3,000,000 each, and still managed to sell them all in a matter of hours. When the Geneva Show car was unveiled to the press, it was already sold out. 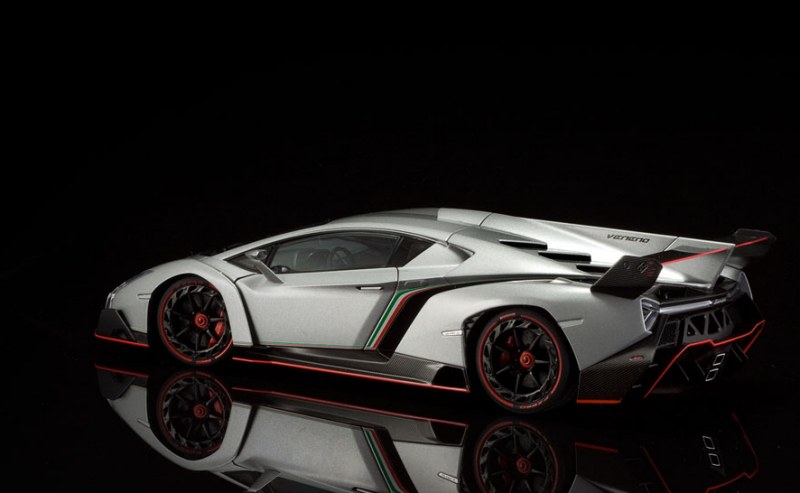 In fact, there are four Lamborghini Veneno LP750-4s in the world, the Geneva Show car was never sold, it was kept by the factory and underwent a series of modifications over time. Seats and different headlights were a couple of them, which leaves three actual production units, all finished in the same stunning Metaluro grey metallic paint with the Italian Tricolore along the side. The only difference between the three cars that were available would be the pinstriping on the fins of the front bumper, side sills, rear diffuser and rear wing. Together with the brake calipers, the central locking screw in the interior stitching and piping, the three lucky customers could select either red (like the Geneva Show car), white, or green. 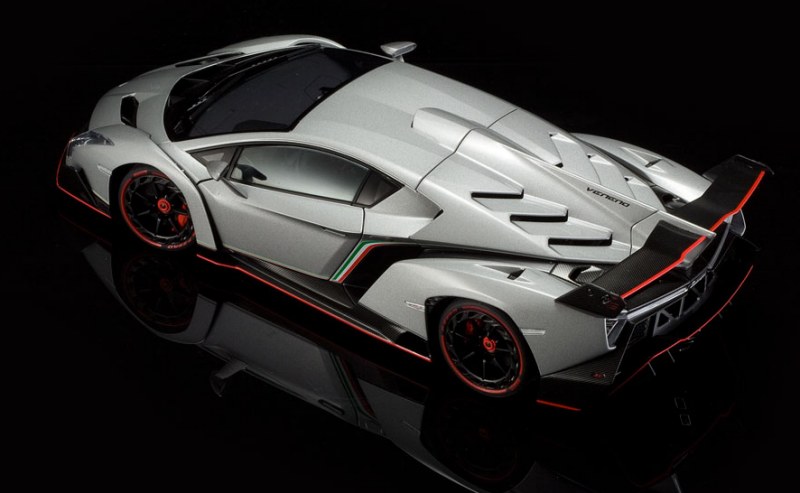 So what made the Lamborghini Veneno so special that people actually stood in line to put €3,000,000 on the table? In the end, the Veneno was only 30hp more powerful than the Aventador she was derived from, but that wasn’t even the most important incentive for the prospective owners. The fact that only three would ever be built, combined with the Veneno being a celebration model for 50 years of Lamborghini (2013 was the 50th anniversary year) was probably all the owners knew before signing the contract.

And the best was yet to come … the Lamborghini Veneno had next to nothing in common with the Aventador aside from the chassis and some other parts to keep Lamborghini from needing a new homologation. Keep in mind, the Veneno was the closest thing to an endurance race car you would be able to drive on the open road, and you could have it serviced at any of the worldwide Lamborghini dealerships. It didn’t get any better than this. 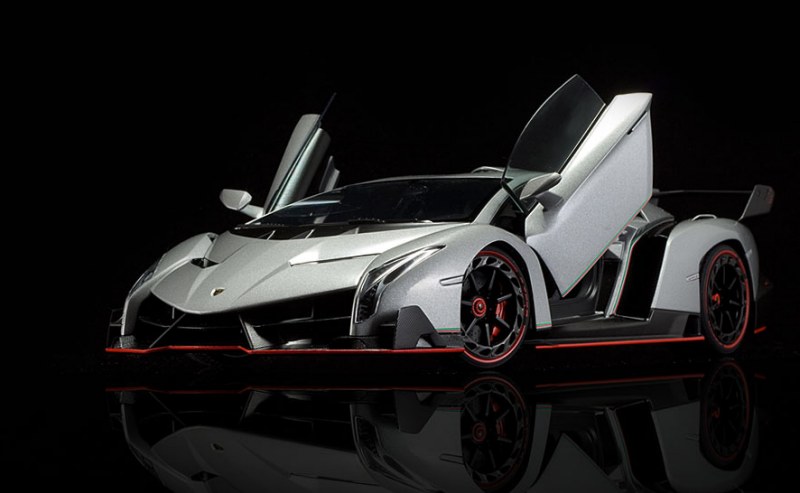 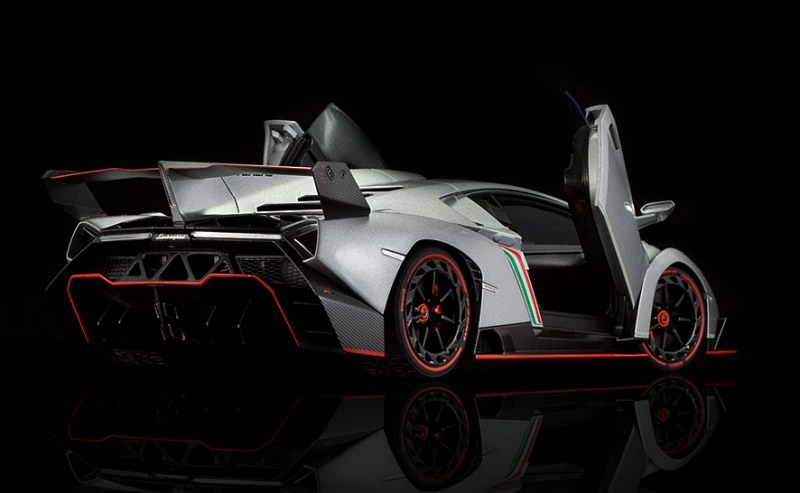 On paper, the Lamborghini Veneno was only slightly more powerful than the Aventador because of the 30hp boost in power, but in real life things were even more impressive. Because of the complete change in aerodynamics, the Veneno had less drag than the Aventador, and was also 125Kg lighter. One owner stated the engine is a lot more ‘alive’, and driving the Veneno is no comparison to the Aventador (and yes, he owned both cars side by side).

So with only three Venenos in the world, you just know trying to own one of them will take a considerable amount of cash on hand, if you can convince one of the three owners to sell her to you. As far as I know, the Verde isn’t for sale, not for any kind of money. The Rosso might be available for the right kind of money, but it isn’t listed for sale at the moment, and the Bianco recently changed hands, for an undisclosed amount of money, so you are probably out of luck there too.

Which brings us to the scale model car scene. Naturally, Italy-based MR Models was the first one to offer a 1:18 scale model of the Lamborghini Veneno, but a sealed resin model at €400 to €500 was just not good enough because we knew AUTOart would be bringing out their fully opening diecast version too, and it would be a lot cheaper. Well, that didn’t completely happen. 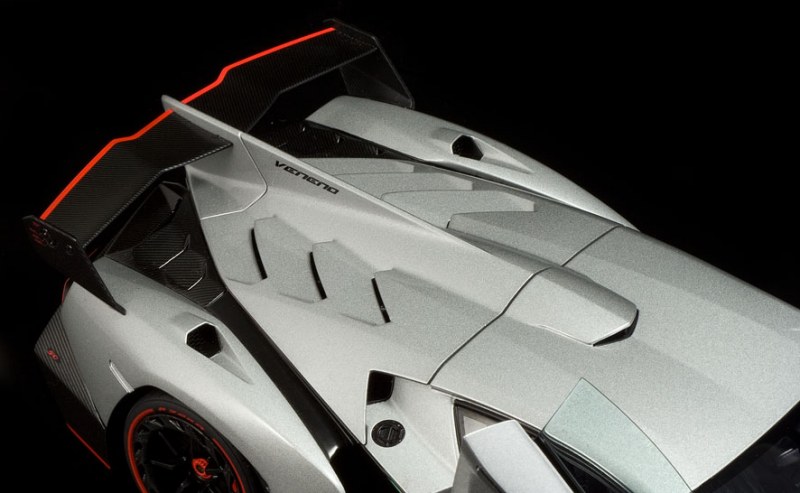 It took AUTOart about two years to bring out their 1:18 scale version, and again in their Signature Series, which loosely translates into high end models at high end pricing. To be honest, this was the first AUTOart model I paid €200 for!

I was a bit upset when I was finally able to order the 1:18 AUTOart Veneno in Europe. Let me explain why: the first two versions of the AUTOart Veneno available in Europe were the Verde Ithaca and the Bianco finished ones, both listed at €180 initially. I wasn’t interested in those ‘fantasy’ shades, and I wanted the Metaluro one, just like the real cars. It became available a few days later, but was listed at €200 ! That’s a 10% price increase in a matter of days. Still, it took only hours for my dealer to sell out on this shade so I was happy to have pulled the trigger anyway.

With such a high price, naturally I was eagerly awaiting the arrival of my brand new Veneno. Problem was, I had to go the 2015 Geneva Auto Show press days, so I wasn’t even at home when she arrived. I did manage to get ahold of her topless sister from Kyosho in Geneva, so I wasn’t too distressed in the end. 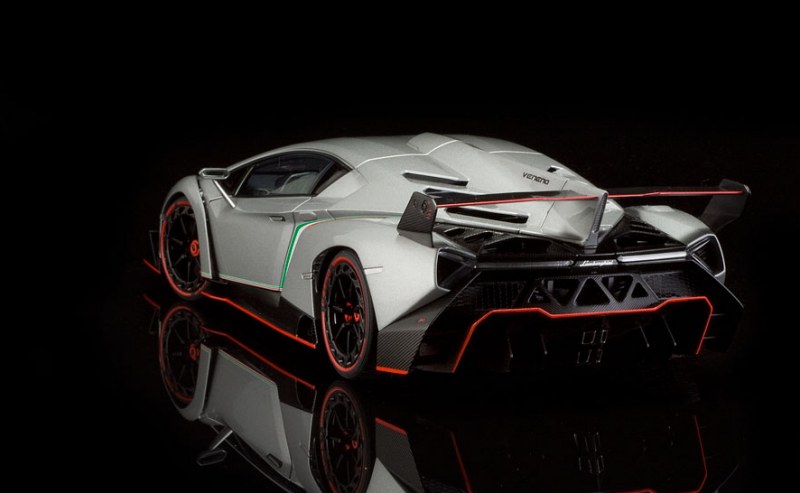 The AUTOart Signature box is a beauty on her own, I love that matte black box with the foam insert to keep the model from moving inside the box. Do keep in mind the large engine cover for the Veneno is kept on top of the foam box, so don’t drop it when you remove the model from the outer box, as it might get damaged severely if you do. The Veneno does come with a small tool that allows you to remove the engine cover while the doors are ‘sprung’, if you move the lever on top of the doors forward they swing open automatically.

After you settle down from admiring this breathtaking model, you might want to know if this AUTOart is worth the high asking price. Is it a perfect 1:18 scale replica of the real car, or did AUTOart make some mistakes along their two year development period? They did, but their Veneno is the best 1:18 scale model you’ll be able to find for the money.

The look and feel are spot on. I have seen the real car at the Geneva Auto Show and took lots of photos. I still remember the car because it was so impressive, so different from anything else. Not really beautiful, but she had an animalistic attraction that just captivated me; and this AUTOart model brings back all those memories. I love the real Veneno and I love this 1:18 scale model. The same atmosphere is there, the stance is just about perfect; a beauty on wheels. 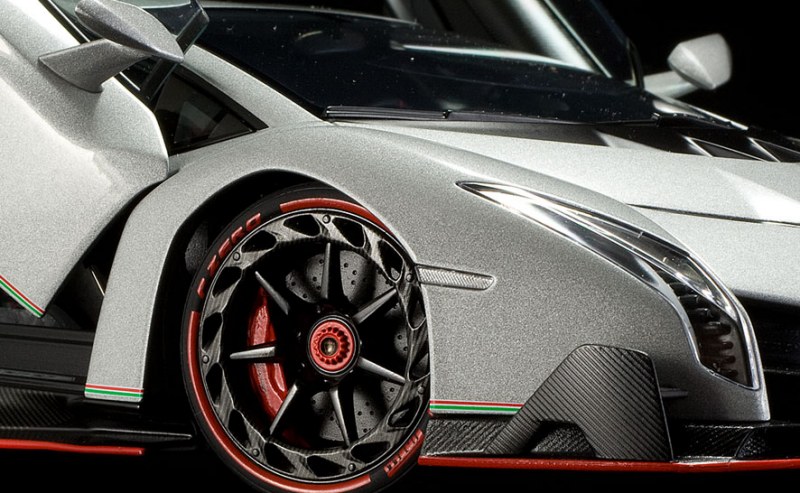 Still there are a few details missing on the AUTOart 1:18 Lamborghini Veneno, and you have read it before: the four vertical fins on the rear diffuser should show a red pinstripe. But that’s not the only detail missing. Take a closer look at the wheels, the red central locking screw is there, the red brake calipers are present too, the lettering on the tire looks good too, but the screws that hold the ring onto the rim are black on the AUTOart model, while they are red on the real Geneva Show car.

But most of the other details on the outside are there, the special fuel filler cap is nicely reproduced. The Veneno script on the vertical fin is spot on. The three different settings of the clear carbon fiber rear wing are shown on the sides, while the four screws at the bottom of the strut aren’t, and you could argue that the AUTOart clear carbon fiber is too glossy compared to the real car. But that would really be nitpicking, if you ask me. 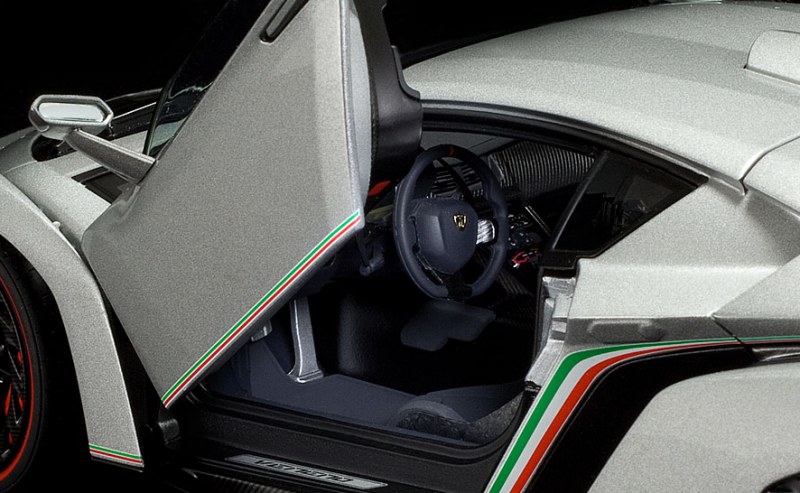 Also note the AUTOart Veneno isn’t ‘fully opening’ either. In fact, the front section can not be removed, while it is possible on the real car. But let’s take a look behind those typical, upward opening doors and check out the outstanding interior of the Veneno, with the clear carbon fiber ‘tub’, forged composite, alcantara, and Carbon Skin upholstery. Did AUTOart manage to get it right on the inside?

Well, yes and no. The interior of the AUTOart Veneno looks really nice, the clear carbon fiber on the central console and door panels is visible, and even the ‘pull cord’ on the door has been put in place by AUTOart together with the alcantara armrest on the door. They did, however, forget about the red stitching on that armrest. 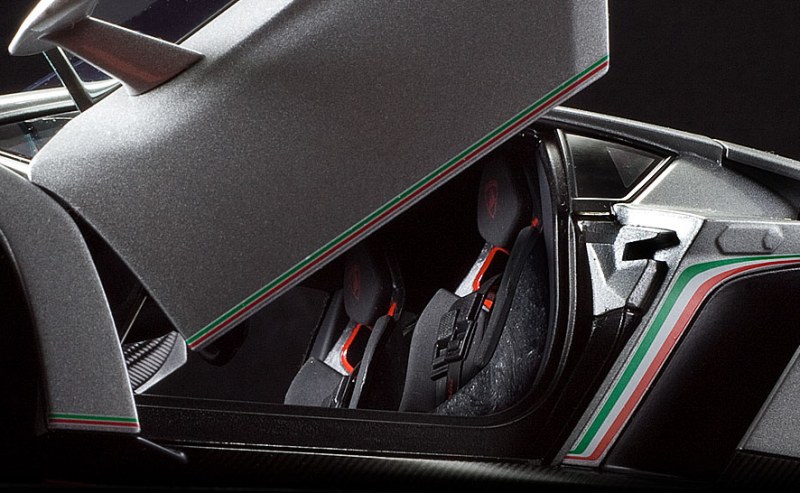 The seats, on the other hand, are nearly perfect. Fortunately, AUTOart opted to use the original Geneva Show car seats and not the latter ones installed by the factory. These show car seats are made from forged composite and show a series of padding to offer some level of comfort, complete with four point seat belts. They are all there on the AUTOart model, complete with a red Raging Bull crest on the headrest and red openings to the seat belts.

The very special Tricolore switches on the central console are naturally present on this 1:18 AUTOart model, as is the slightly modified switchgear on the central console. There is no display like we’ve seen on the Aventador, but the totally different dashboard pod layout has been nicely captured by AUTOart inside the Carbon skin covered pod. But once again, the red stitching has been forgotten on the dashboard, while the steering wheel did receive a small red line in the top center. The headliner inside the real Lamborghini Veneno is again a combination of Carbon Skin and red stitching. On the AUTOart, the headliner does show two different materials, but no red line. 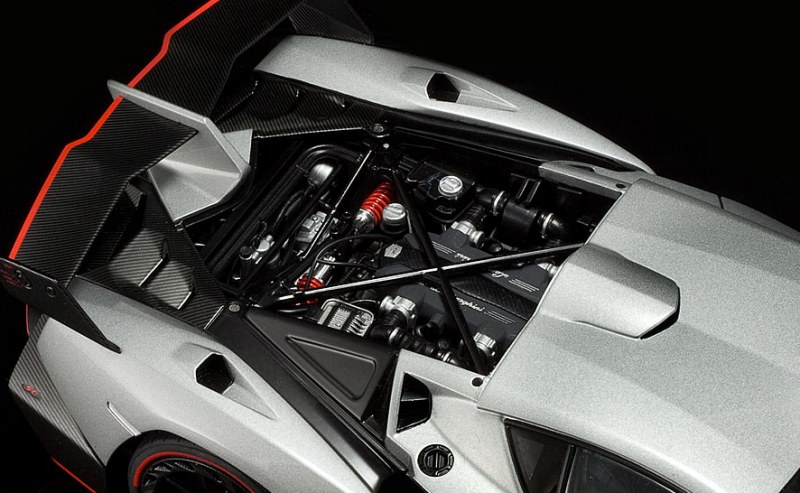 So the AUTOart Lamborghini Veneno scale model isn’t perfect, especially on the inside, where there are a few serious omissions. But would that have kept me from buying this model? Not at all. Even with the small issues, this is without a doubt the best 1:18 scale model of the Lamborghini Veneno available on the market at the time of writing, even with the Kyosho being available now too at a considerably lower price, which is still a sealed model and not as highly detailed as this AUTOart model.

If you want to add the most impressive car Lamborghini has even made in real life to your diecast collection, this AUTOart Veneno is the one to get, in the original grey metallic Metaluro shad,e naturally. There are no green, white or red Lamborghini Venenos in real life, so why bother with a scale model of a car that doesn’t even exist? Because it looks great, I guess. I have to admit, the Veneno looks really nice in white too. 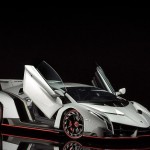 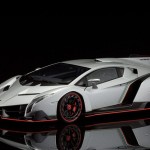 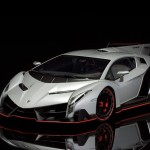 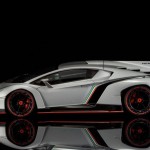 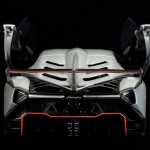 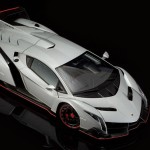 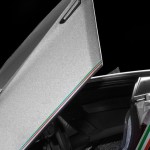 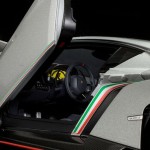 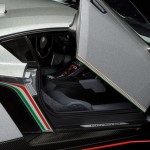 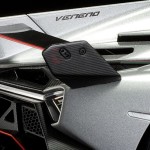 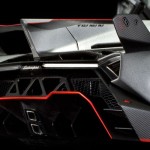 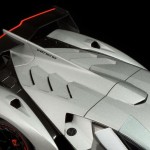 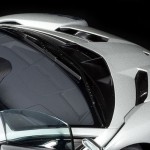 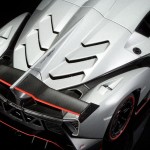 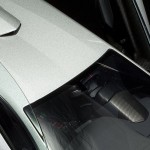