One of AUTOart’s most anticipated models in recent times is the 1:18 McLaren P1.  There is an assortment of colours coming, the first of which is the Matt Black with Red accents.  We have that model here today for review.  The McLaren P1 is a sportscar or hypercar; whatever it is, it is capable of speeds in excess of 218 mph or 351 km/h.  I won’t bore you with the details, as there are many resources to entail the granular technical side of the P1; in a nutshell, the P1 utilizes Hybrid Power and Formula 1 technology.  The car is like nothing we’ve seen before, perhaps a possible successor to the famous McLaren F1. 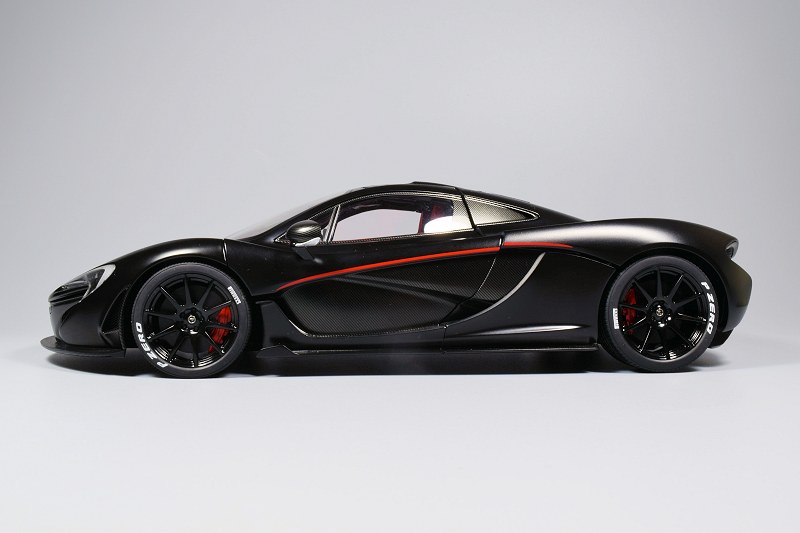 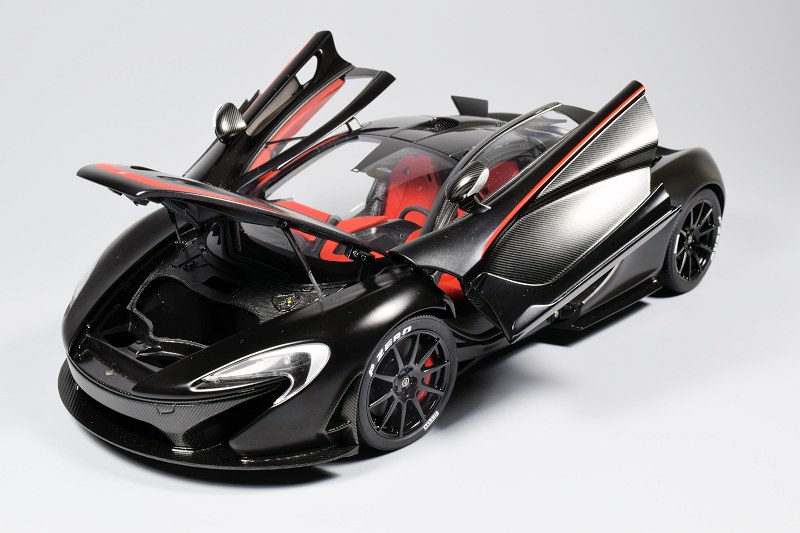 The P1 model is manufactured by AUTOart in 1:18 scale, it is aligned with their Signature Series tier.  Base material (which has been scrutinized long before its release) is composite, or as some like to say, plastic.  It features opening parts and a removable rear section. With tax, this model is well north of $300CND.  The P1 model comes shipped in the typical styrofoam shell box, both the rear hatch and spoiler come shipped independently from the model.  You will notice the spoiler is in the closed position for all photos.  The included instructions on how to install the spoiler are somewhat vague, and since the model wasn’t mine, I wasn’t going to press the install in case of damage.  So my first question to you is, how do you install the rear spoiler? LOL 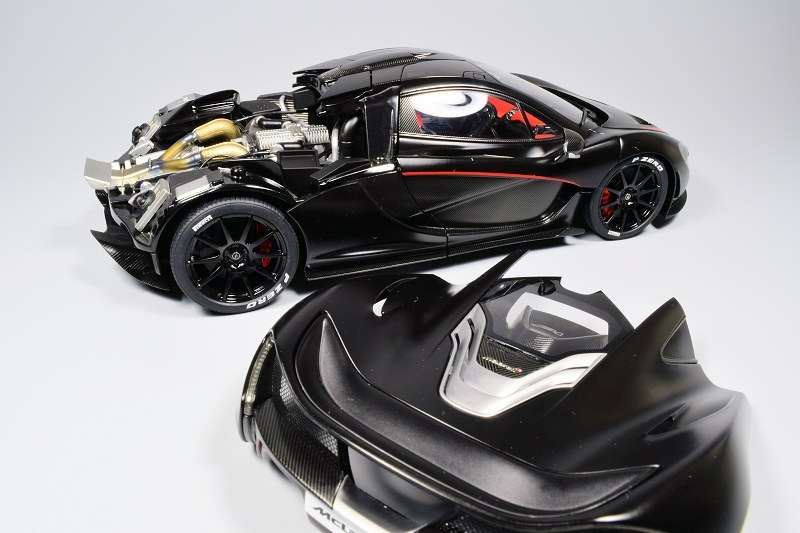 The exterior lines of the P1 are just stunning; the car is pushing the boundaries of design as well as keeping the essence of the sports car alive.  The P1 concept isn’t everyone’s cup of tea, but we don’t like those haters anyway (LOL).  AUTOart did a great job at capturing the overall beauty of the P1’s lines.  Initially I wasn’t sold on the Matt Black exterior, but spending a little time with her did change my opinion, and she photographs oh so well!  Exterior paint along side the carbon fibre craftsmanship is excellent.  The Red accent bits work well in mating the exterior with the interior.  I love the stance too, very aggressive, as all sports cars should be. 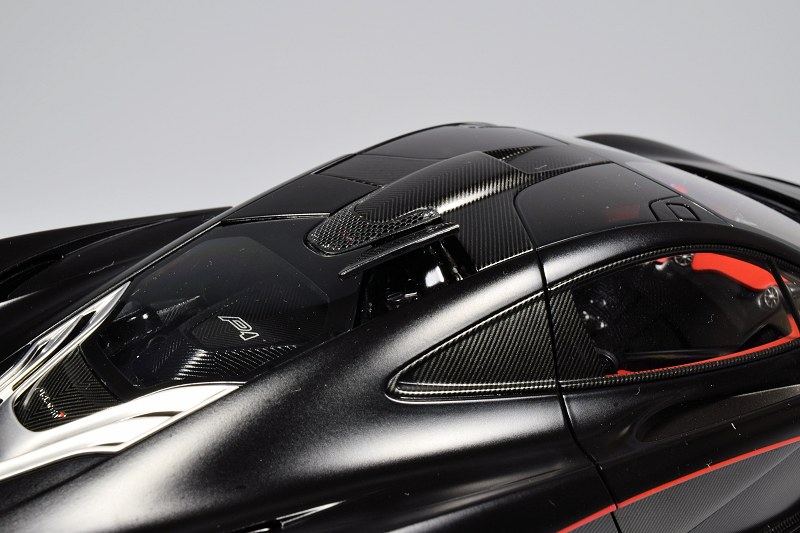 The roof area features flaps left and right.  Function of each is flawless. 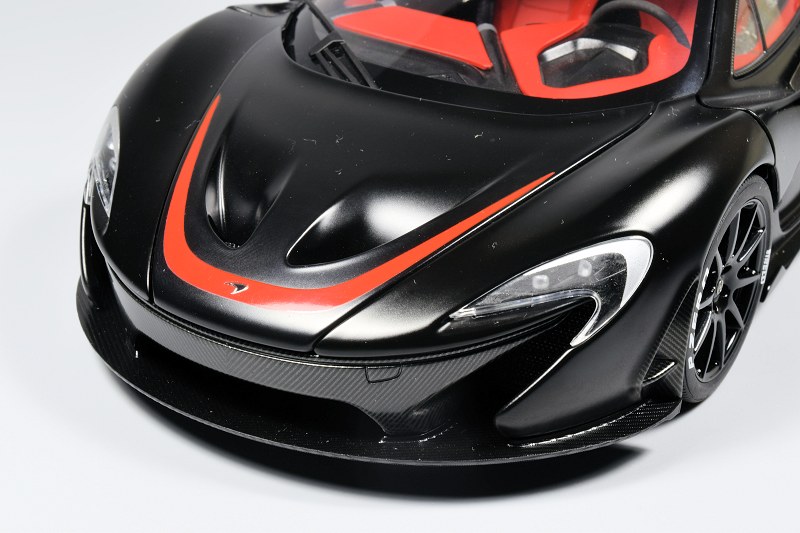 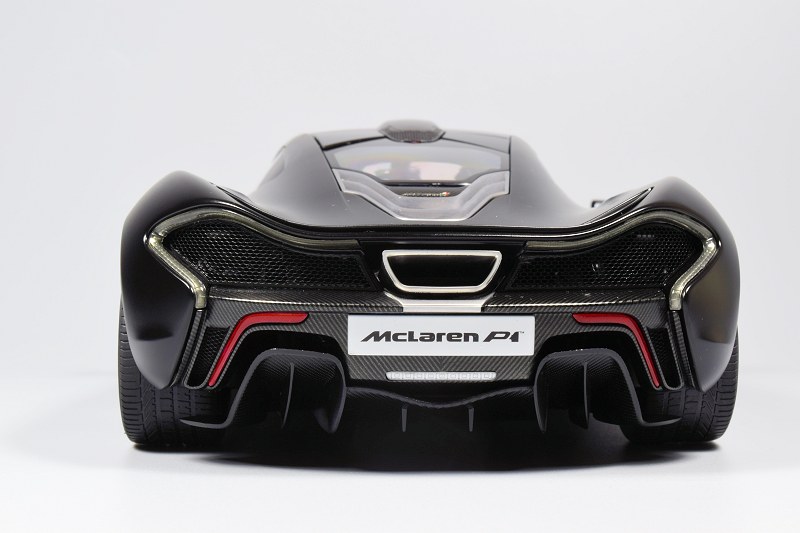 The front of the P1 features carbon fibre detail, mesh grilles and access to the storage.  All elements are created with care, fit and finish is spot on.  There has been some debate on the headlights, in my opinion the detail is there, but based on the price point a little more definition would have been appreciated.  Rear is much like the front, great execution throughout.  AUTOart even captured the minute workings of the rear brake lighting. 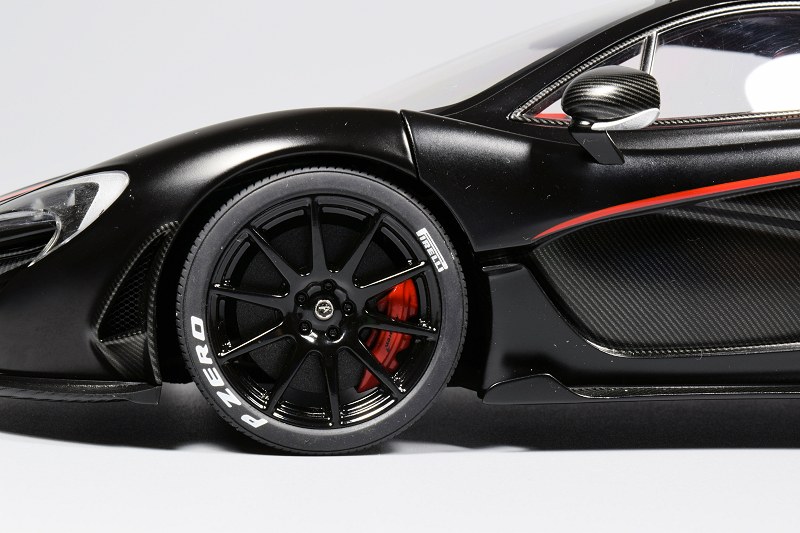 The P1’s wheels are sharp and executed in typical AUTOart fashion.  I personally love the white script on the wheels.  Basically it screams DON’T MESS WITH ME!  The braking components add to the realism with Red calipers and ceramic discs. 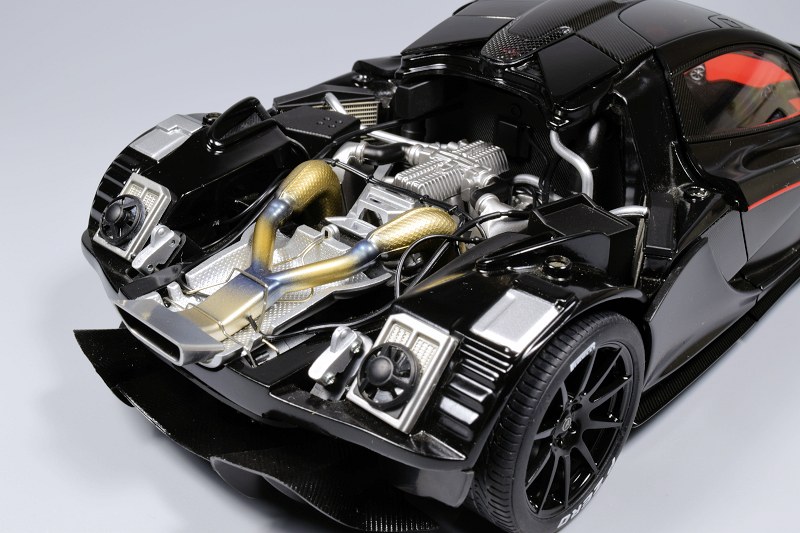 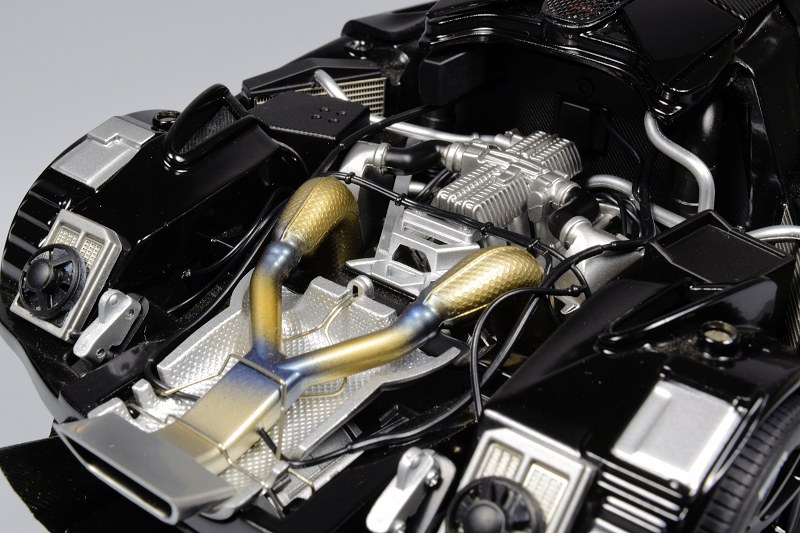 The P1 features a 3.8-litre twin-turbocharged V8 petrol engine.  The twin turbos produce 727 bhp and 531 lb·ft of torque.  Remember the car is hybrid; the in-house electric motor develops an additional 177 bhp. All this sounds delicious, and one would expect the P1 engine detail to be on par; well, folks, it is not.  Your initial thoughts are wow, but the dust settles very quickly under closer inspection.  Based on comparing photos of the 1:1, the engine falls short. With a $300+ price tag the model ships with a $150 priced motor.  A little more effort here could have gone a long way.  For example the radiators and cooling fans look like something I recently assembled on a LEGO Volkswagen T1 camper build.  And based on the model’s repeated delays, I believe we collectors deserved a whole lot more for our patience.  AUTOart was already behind the gun with the switch to composite from metal, so winning the hearts of fans would rely heavily on capturing the best possible detail.  Well AUTOart you missed this race. 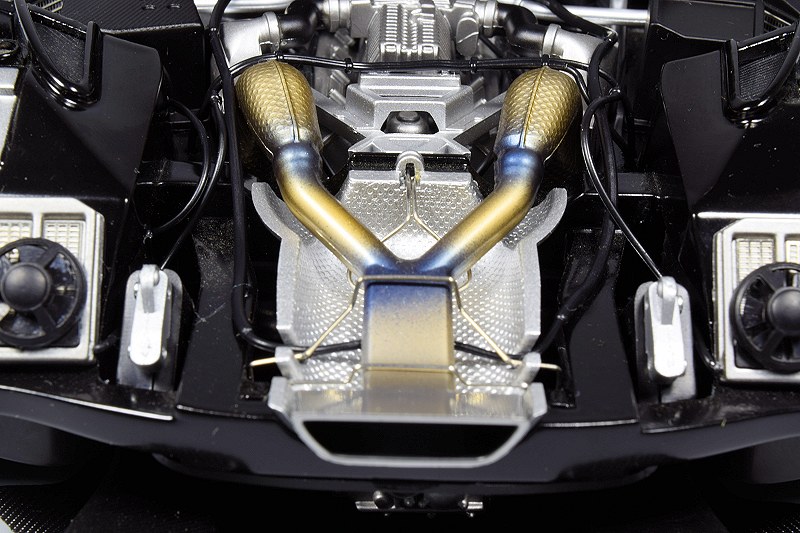 It’s not all doom and gloom, though. On the positive side, the rear hatch is easily removed and installed, though it does seem extremely fragile due to the composite material.  Also the paint work on the exhaust system is very cool along side the heat-shield, both add realism to the otherwise lacklustre engine bay. 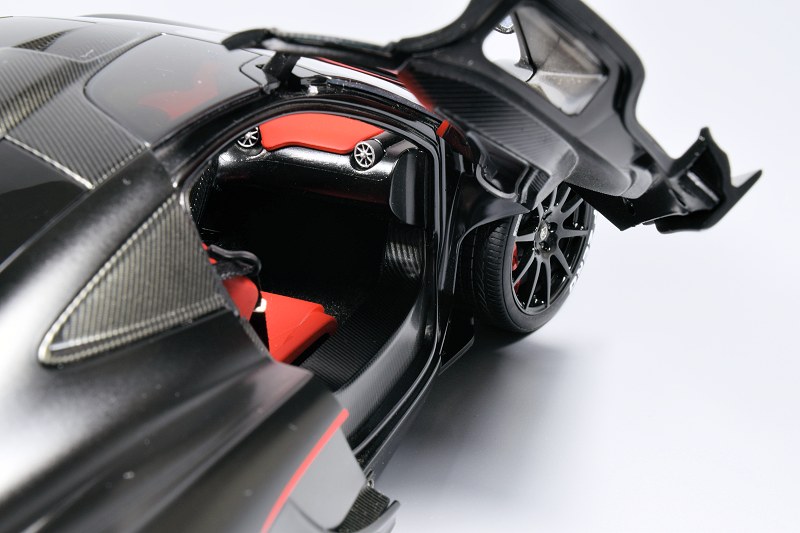 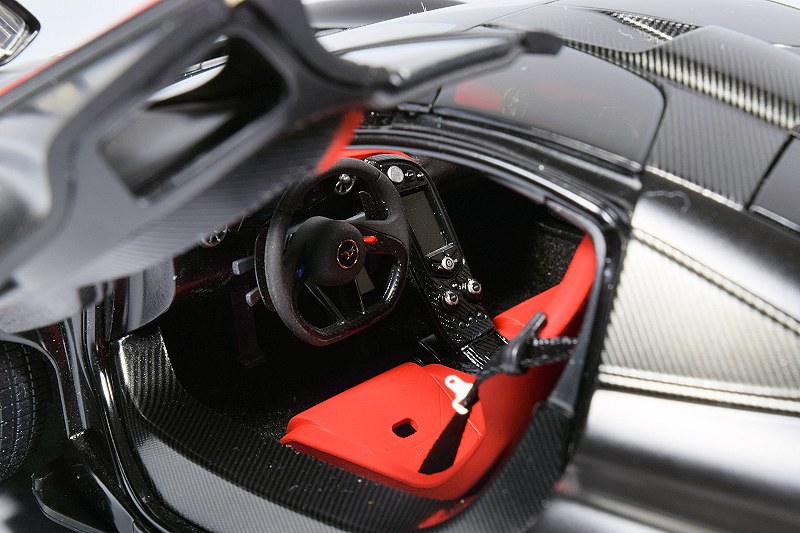 Access to the interior is done through the traditional McLaren up-swept doors.  Function is flawless here.  AUTOart seem to have captured the design well and profile lines too.  There are no shock absorbers or struts in view, which mirrors the 1:1. Inside the cockpit all elements are there and crafted with care.  Red on Black is very satisfying.  Carpeting and fabric seat-belts are present too.  It isn’t AUTOart’s best work, but I grade it A minus. 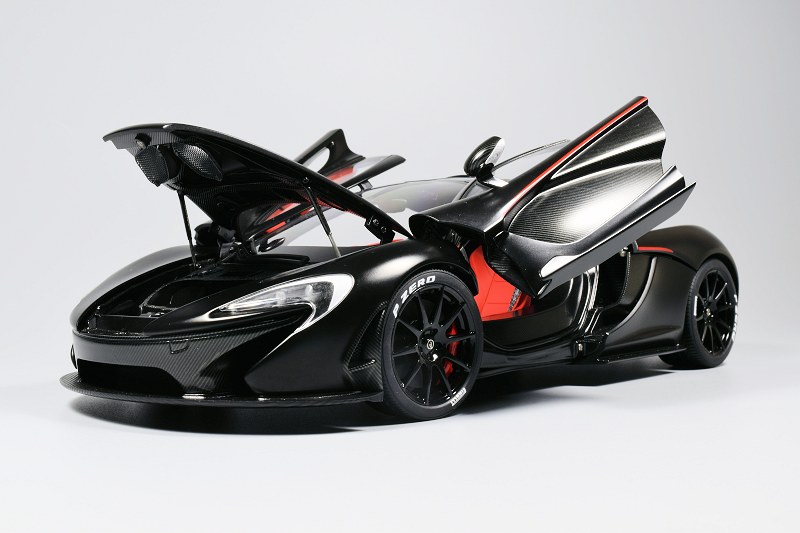 The McLaren P1 is a unique monster for sure.  Overall AUTOart has done a respectable job with the P1.  No doubt the biggest miss is the engine detail.  I’m puzzled on who or how this final product gets approval through the AUTOart brass.  That being said there are other options in scale, resin, though they are sealed.  There is also the TrueScale Miniature option, but they don’t provide access to the engine at all.

The AUTOart P1 is most likely the best dollar for dollar scale model available, BUT it falls short of the brand’s original identity.  It really seems they don’t know where to play, be it high-end, low-end, mid-range, or what not, or is this a simple case of margin before execution?  You decide.  Enjoy the pics! 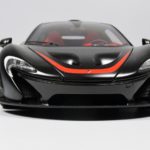 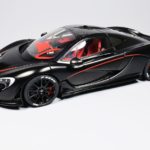 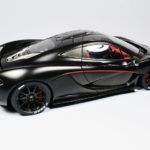 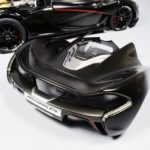 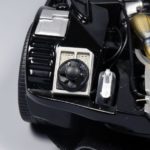 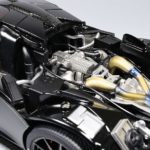 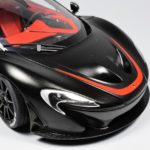 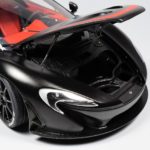 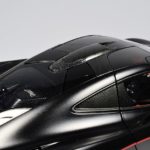 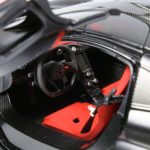 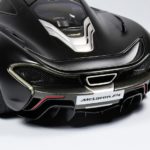 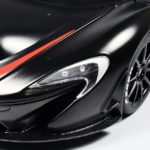 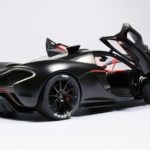