There was some debate amongst the team on whether we should or should not do a full review on the new AUTOart 1:18 Nissan Skyline RS Turbo Super Silhouette 1982.  Which by the way is already noted by AUTOart as sold out.  This would lean to the popularity of the model in general, and why the past variant of the same is commanding some serious coin on the secondary market today.

In the end, we went forward with the review, here is the 1:18 Nissan Skyline RS Turbo Super Silhouette in full by AUTOart. This is especially valid for those new to the hobby that are not familiar with the original release.  And it vitally important to document as many models as possible, a valuable resource for those who take the time to educate themselves rather than watching the endless supply of “unboxing” videos.  If you’re not in the know, the latest release is actually based on a similar model from AUTOart – original release date 2009-2010?  Both are relatively the same, slight differences for obvious reasons the wheels and front fascia. 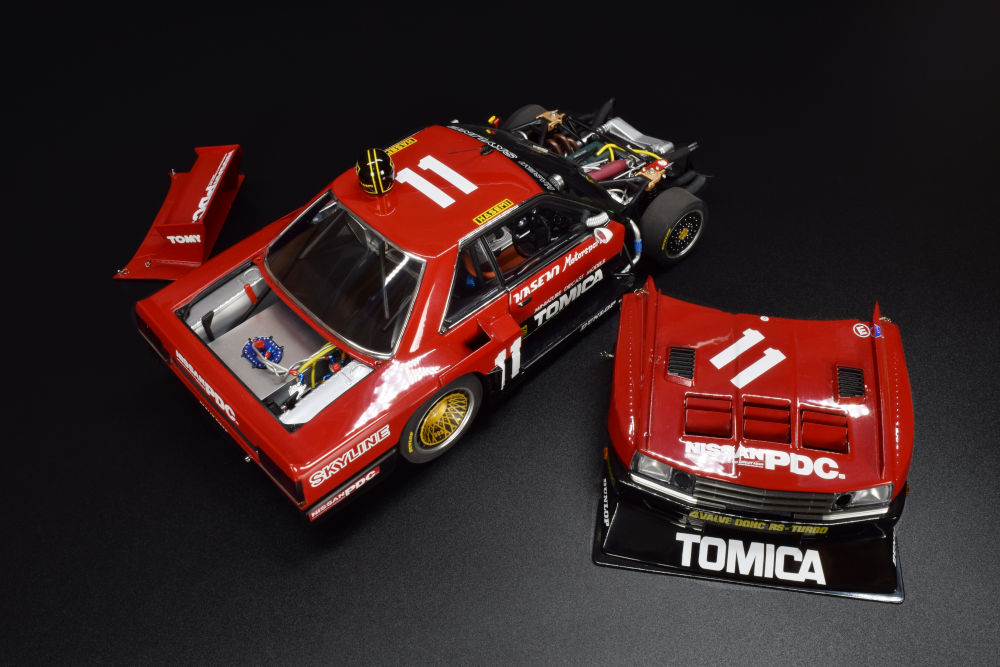 By no stretch are we an authority on the Nissan Skyline RS Turbo Super Silhouette or race series.  And to be honest the car doesn’t truly doesn’t appeal to the immediate DiecastSociety.com team.  What we will say, the replica is a true spectacle, and in short, one needs to respect it for just that and appreciate how well this reproduction truly is.  It touches on all elements of AUTOart’s past successes when we considered AUTOart as a true giant and innovator in scale. 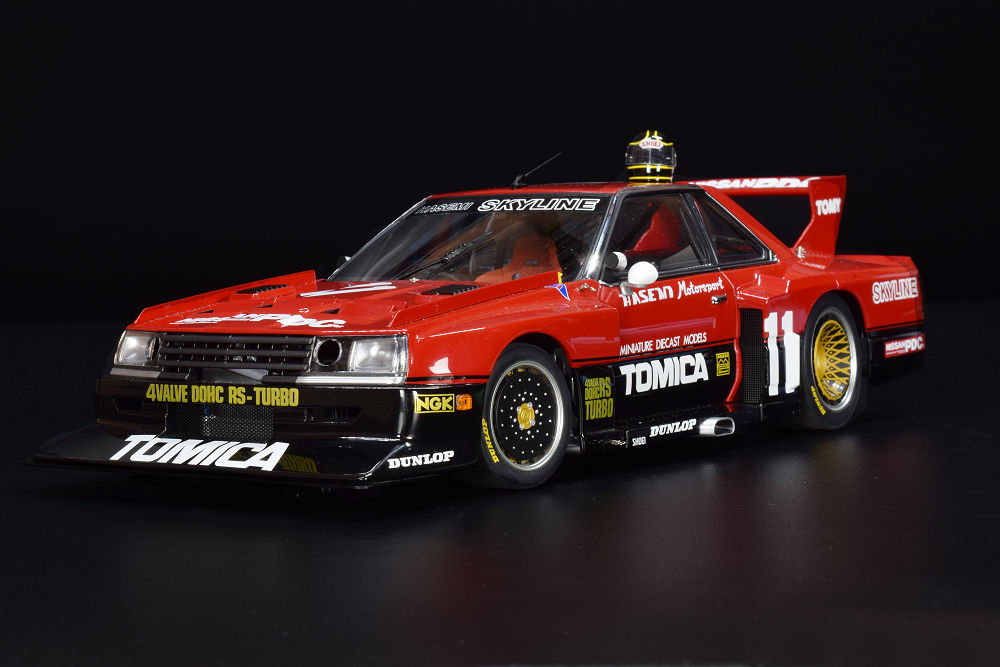 As the Super Silhouette racing, it started in the late ‘’70s.  The category allowed for some seriously modified production cars; if there was a definition for the coined term “Godzilla” for certain Nissan cars this race car could take the title too.  The tubular interior frame was a hint to what this racing legend would become.  The exterior was based on a production Skyline, where several items were stretched, flared and extended to offer performance with a novel look.  The end result, performance that rivalled F1 cars of the period.  All of this equated to a successful race car with multiple wins through 1982-1983. 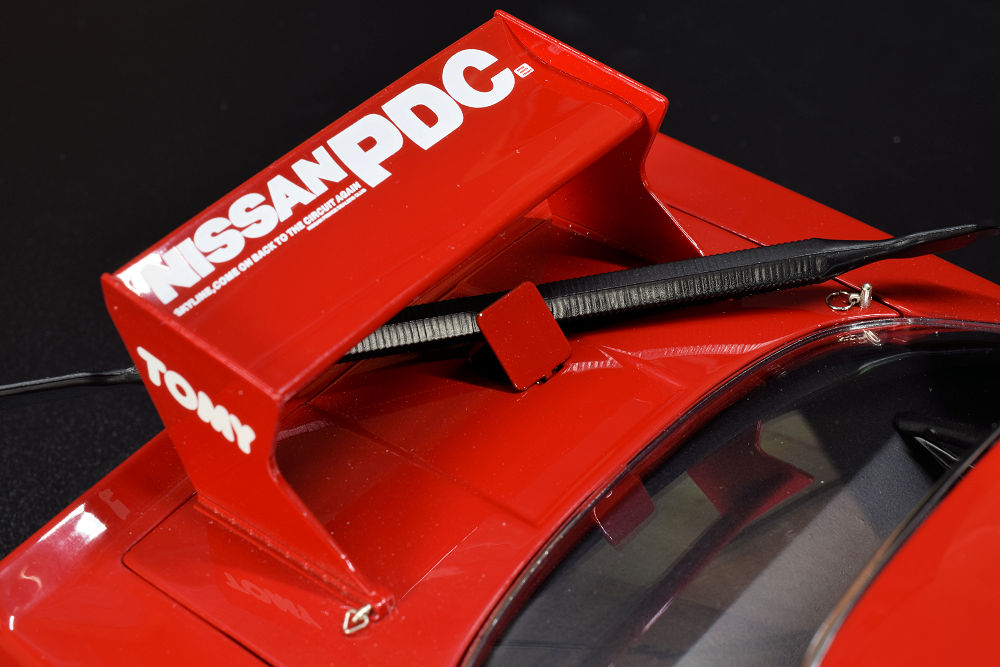 As for AUTOart’s definition, it cannot be disputed that the Nissan Skyline RS Turbo Super Silhouette is one of their best efforts ever, and the proof in our praise and the 40+ photos we share with you.  If ever one craved a complete 360 effort, this one would be in AUTOart’s top five!

The subject matter is niche, and likely why the model doesn’t receive the proper accolades in all channels…  The “mass” appeal isn’t here and it doesn’t offer the fanfare a typical  Ferrari, Lamborghini or Porsche badge would.  That aside, the model excites the imagination of what is possible in scale.  And also begs the question, why aren’t we seeing more examples at this level? 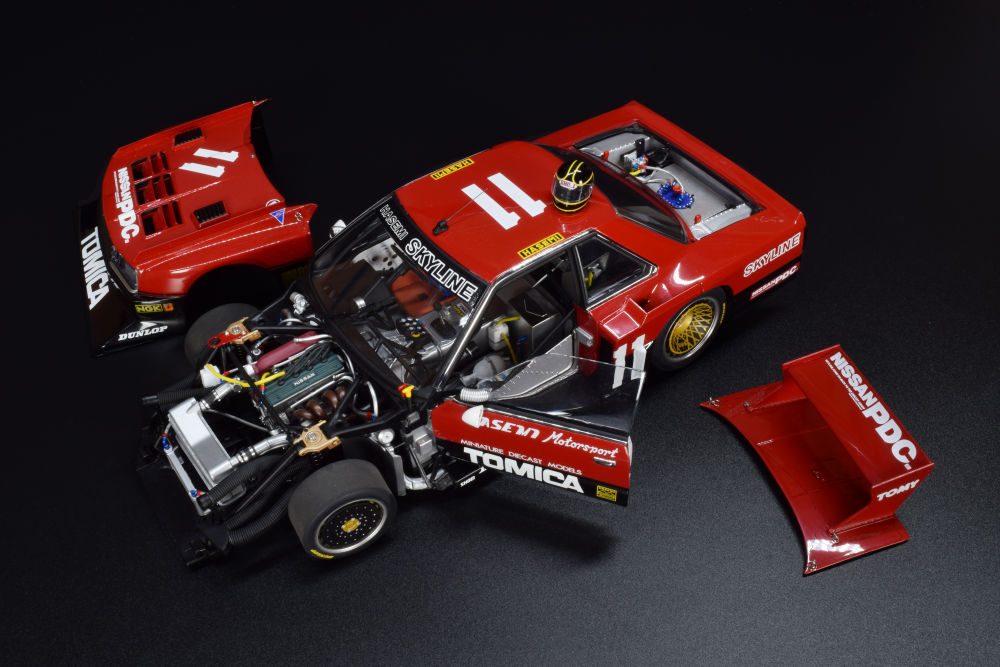 Out of the box, the model itself requires some assembly to complete.  The front cover and rear hatch are shipped separately and require you to install them.  The roof antenna requires installation as well – all simple tasks.  We need to mention one of the coolest accessories we have ever seen to date, AUTOart supplies a scale helmet, fully painted with a functional visor.  How cool is that!

Paintwork along with decals on our example was definitely up to speed – overall effectiveness would include the shutlines and appliable panel gaps.  Everything worked and fit quite well.  It truly looks as good in person as the photos will show.  Did we mention, this is a rare diecast metal effort from AUTOart?  It is so!  Hopefully, this will also address a fair group that still has an objection with their direction to move to composite exteriors. 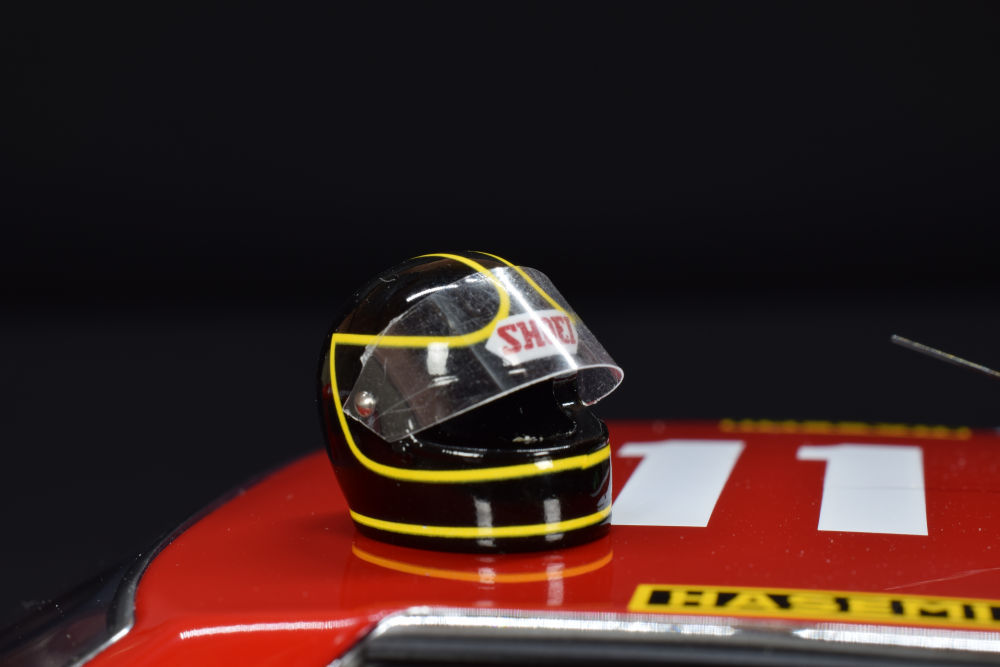 There are multiple locking pins made of metal throughout the exterior side and somewhat functional too!  AUTOart was proactive to include a few extras pieces inside the box for good measure.  They are definitely fragile so handle with care and without canvas gloves! 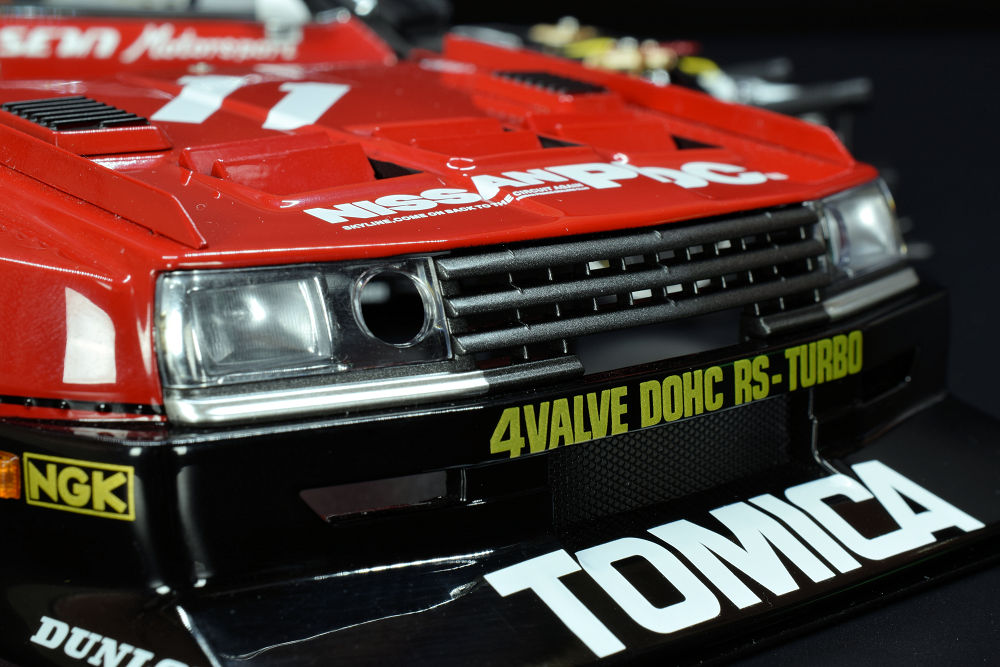 The entire front section of the car separates from the chassis.  Note, within this upper front section are some of the obvious differences from the original release.  This would include the nature and positioning of the cooling/venting – a variant of the original car.  The level of detail here is impressive.  We do need to apologize in advance, some may have noticed the photos with the model fully assembled does not have the front cooling hoses (adjacent to the headlight) aligned.  This is our fault.  We did not realize the misalignment prior to the photoshoot.  We can confirm with proper installation both sides align to satisfaction.

Once the metal cover is drawn away the proper tubular frame is revealed alongside a highly developed motor.  What AUTOart does extremely well here (and is lacking from most of their recent offerings) is offer a complete motor that rivals and possibly exceeds the exterior brilliance. 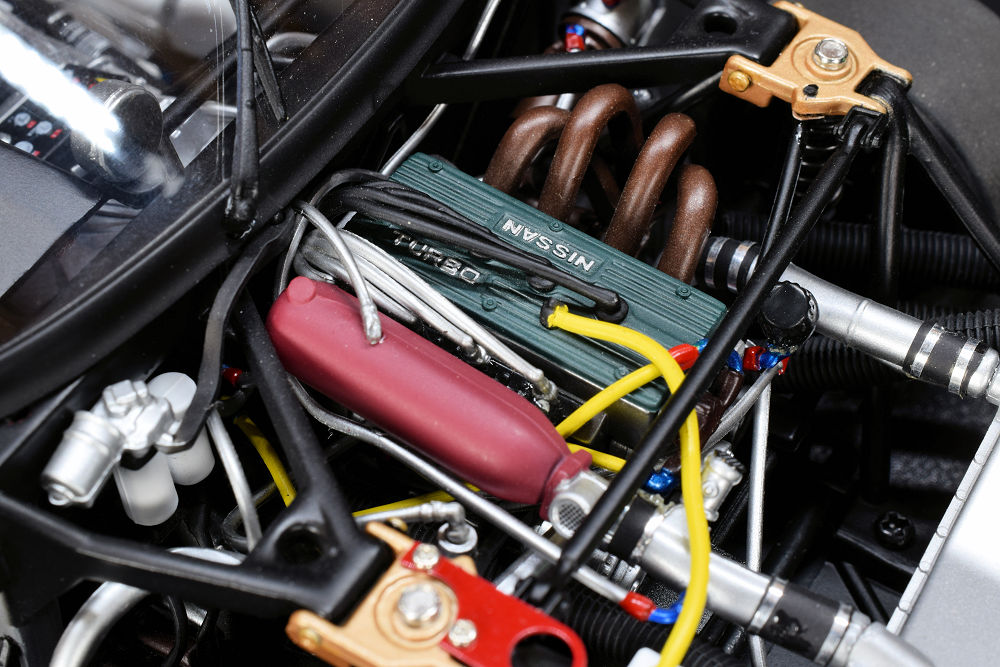 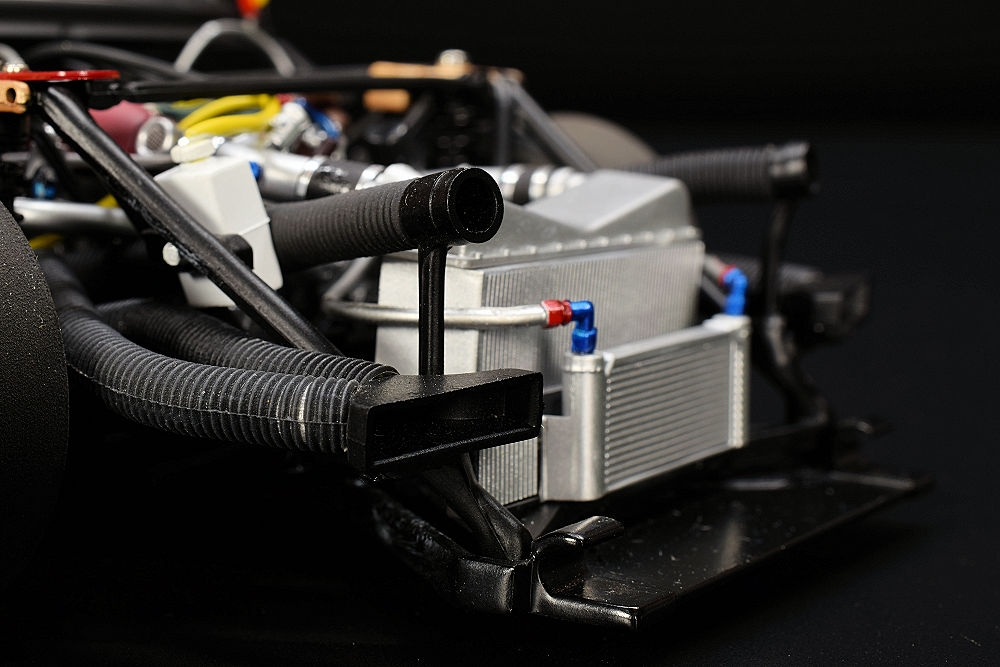 The use of colour is key.  It offers up a multitude of definitions and layers.  Also, the plastic parts that are painted to look like metal lean more towards metal than plastic.  Again, this is not the case with recent releases by AUTOart, and may we add, extremely frustrating based on price point alone.

The cooling apparatus with the supporting bits, like hose connectors, wires add that additional realism.  Are you convincedyet? 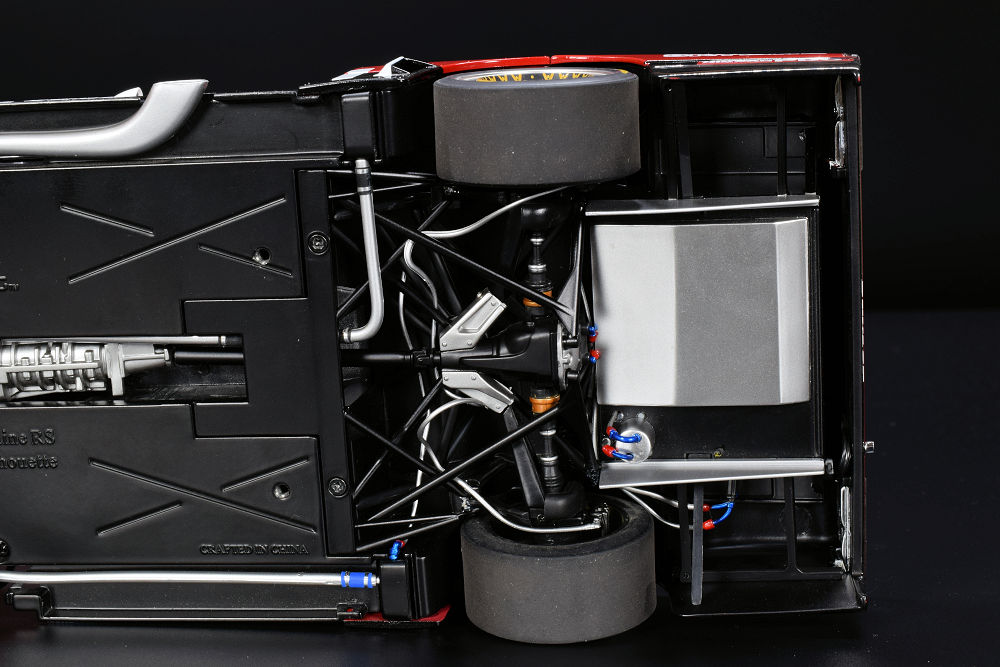 The underside of the Nissan Skyline RS Turbo Super Silhouette is another marvel and possibly one of the best examples our team has witnessed by AUTOart.  Along with the fully functional independent suspension front and rear, the model provides highly detailed suspension components, exhaust and transmission view. 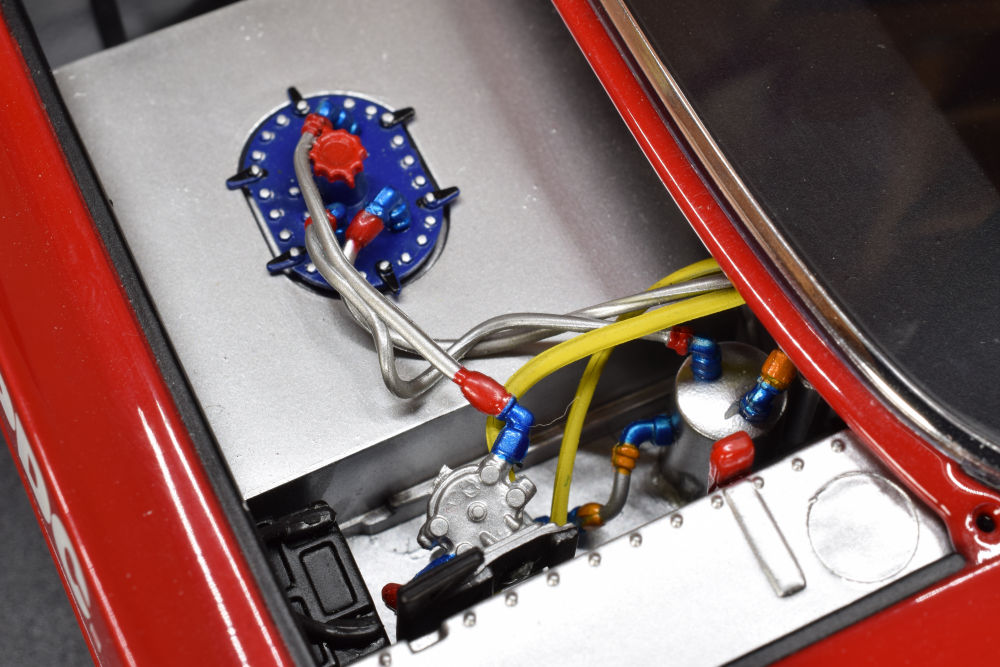 The rear-end of the model mirrors that of the front.  Lifting the rear cover one exposes the storage area to reveal the fuel tank and supporting cast of hoses and whatnot.  Look at the level of realism here with the precision riveting work, applicable hoses and connector bits.  Truly outstanding! 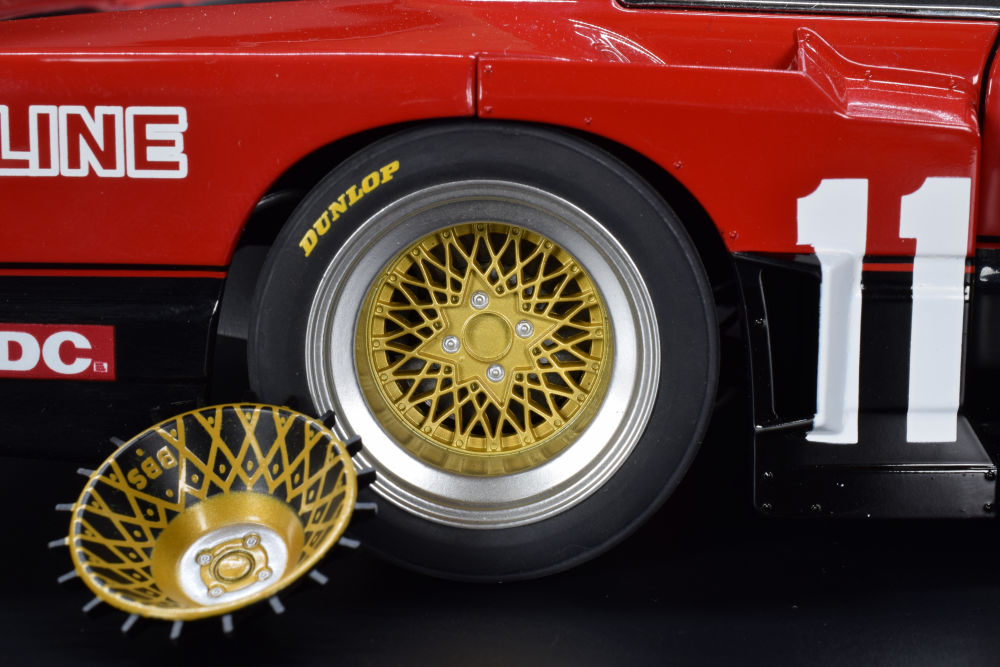 Moving to the wheels the rear versus the front definitely offers up some serious dish.  The BBS shoes are all racewear, each set offering up a stunning level of definition.  The added ability to remove the supporting turbo fan style covers is an accomplishment in itself – each is held in place with magnets.  The function is precise and clean.

It gets even better!  The interior is another aspect of this magnificent race car.  The level of detail starts as soon as one opens the doors.  The White-faced door card with drilled holes for weight saving is truly impressive – note the small detail inbehind.  The supporting metalwork with rivets around the door opening is eye-catching too. 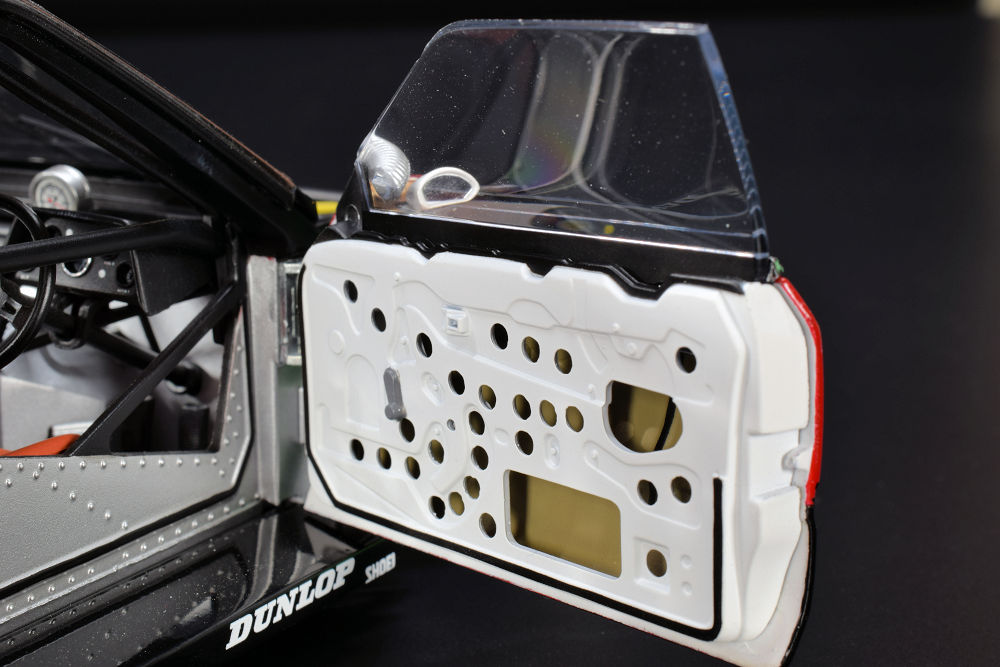 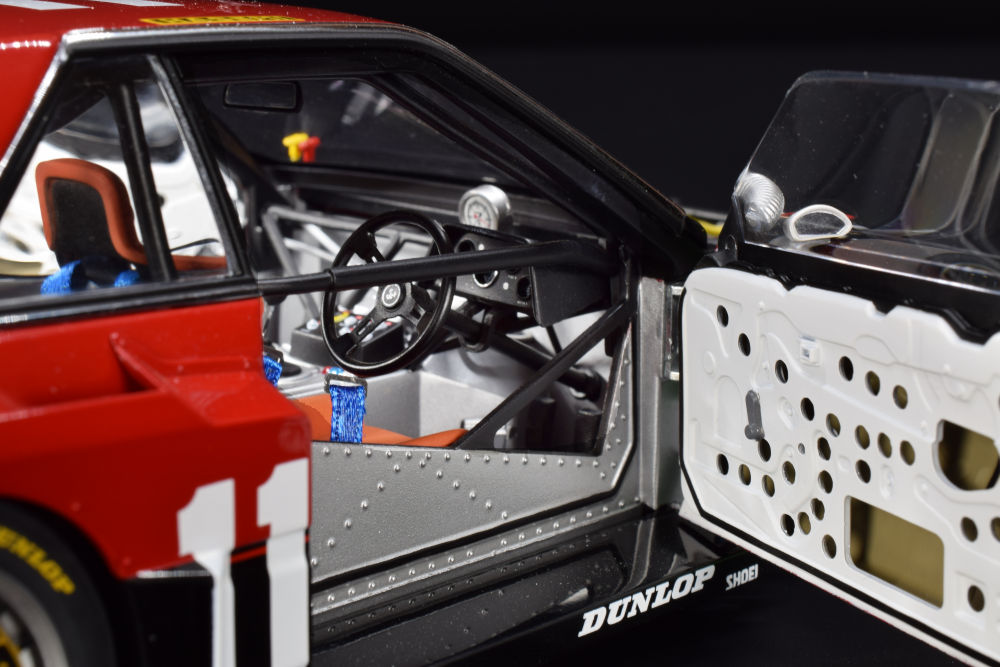 Inside each area of the cockpit is truly inspiring to race car fans.  The model is not short on details and definition.  The multitude of gadgets and gizmos are too many to count, each precisely crafted and placed.  Even the seat-belt harness for the driver features fabric.  God knows we’ve been complaining about this for years now as AUTOart for some reason has embraced rubber over fabric!  Race fan or not, one can appreciate the effort and level of craftsmanship.

The AUTOart Nissan Skyline RS Turbo Super Silhouette 1982 is without a doubt one of the best examples to leave the AUTOart factory floor. Our team is extremely impressed with every inch of the model.  Can we say it is their masterpiece?  We think so!  Overall the effort here is better than any Pagani example past or present when you measure all levels of competencies of scale model design. 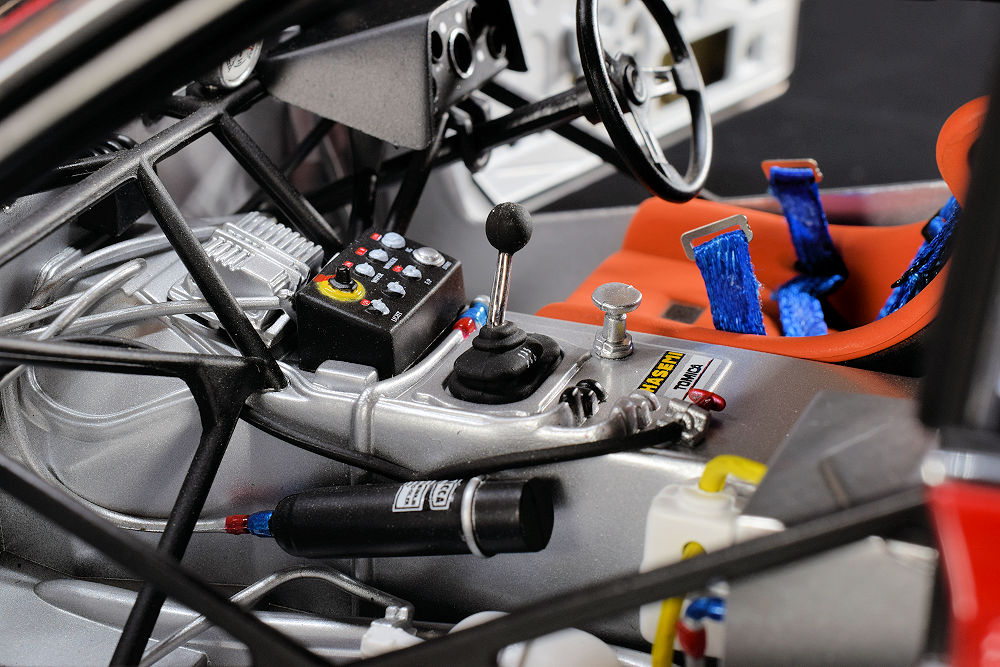 We’re not surprised that AUTOart already defines this latest incarnation of this Nissan Skyline RS Turbo Super Silhouette as sold out. It really is that good.  One could only wish AUTOart would get back to this level of craftsmanship more often than not or at least provide us with a true, complete, 360 effort with the latest assortment of new models.  Unfortunately, more often than not, the motor or interior or both are leaving us, collectors’ desiring more.  Enjoy the pics!