There is the added anticipation when AUTOart is about to release another supercar.  Add the Pagani name to the sentence and the excitement is echoed even more.  The latest offering from the team is the 1:18 Pagani Huayra BC in Rosso Dubai/Carbon.  A total of seven exterior colours are promised from AUTOart, a few recently unveiled.  This example is the first colour to make it to market and comes from their Composite and Diecast series.  Please check out the AUTOart news feed here on the website to learn more. 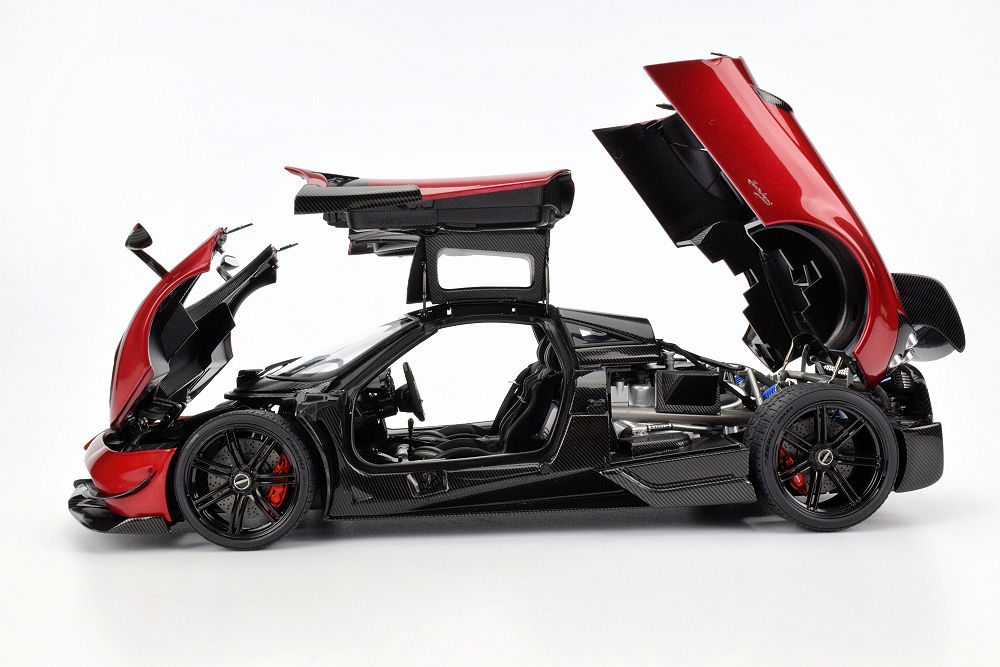 The BC in Huayra BC is named after the late Benny Caiola, a friend of Horacio Pagani, and the first Pagani customer.  The Pagani Huayra BC excels over the standard Pagani Huayra in many forms.  Power is upgraded as well as the a few exterior changes.  Carbon Triax is the base material for the BC which Pagani claims is 50% lighter and 20% stronger than regular carbon fibre.  This improves the overall power to weight ratio substantially.  Exterior changes in basic form include new aluminum alloy wheels, venting/fins over the front wheel and immediate front section and massive rear spoiler.  In the end, this is a track-focused supercar! 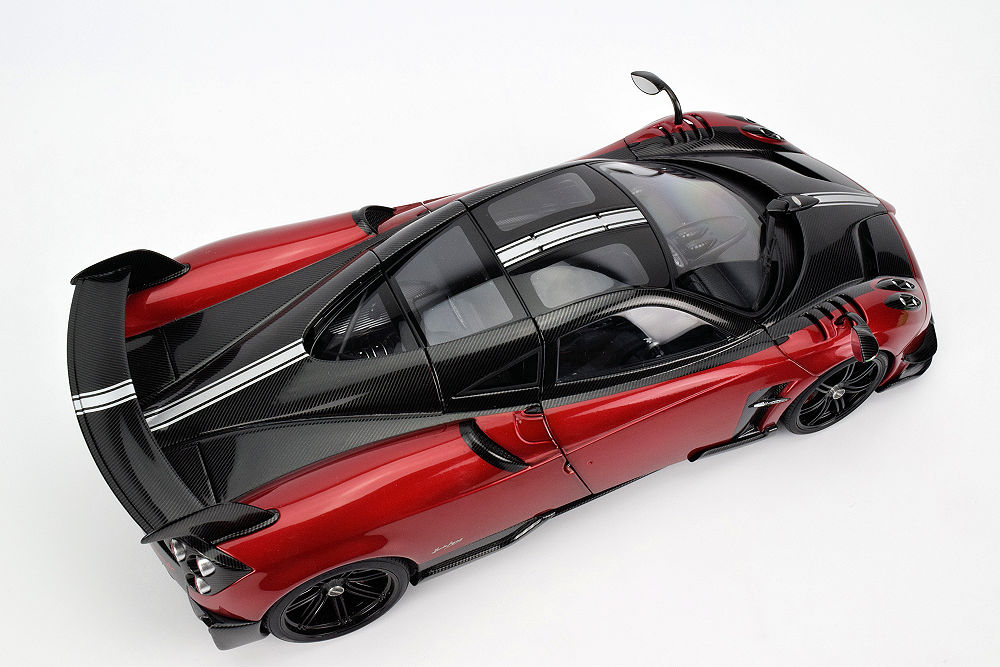 Before we get to the meat and potatoes, we want to share a few tips in preparing the model.  First and foremost, read the included instructions.  This will ensure you don’t damage the model.  The end-user is required to remove two screws in the front, located underneath each front wheel (turning slightly to expose).  AUTOart does provide a screwdriver within the box.  DO use a magnet to magnetize the tip for a few seconds to ensure the screw stays in place with the driver’s head.  This will minimize the chances of losing any screws!  The rear screws are located about mid-height just behind the door handle opening in the rear body panel.  Don’t forget to ALWAYS open the doors first before you access the rear or front! 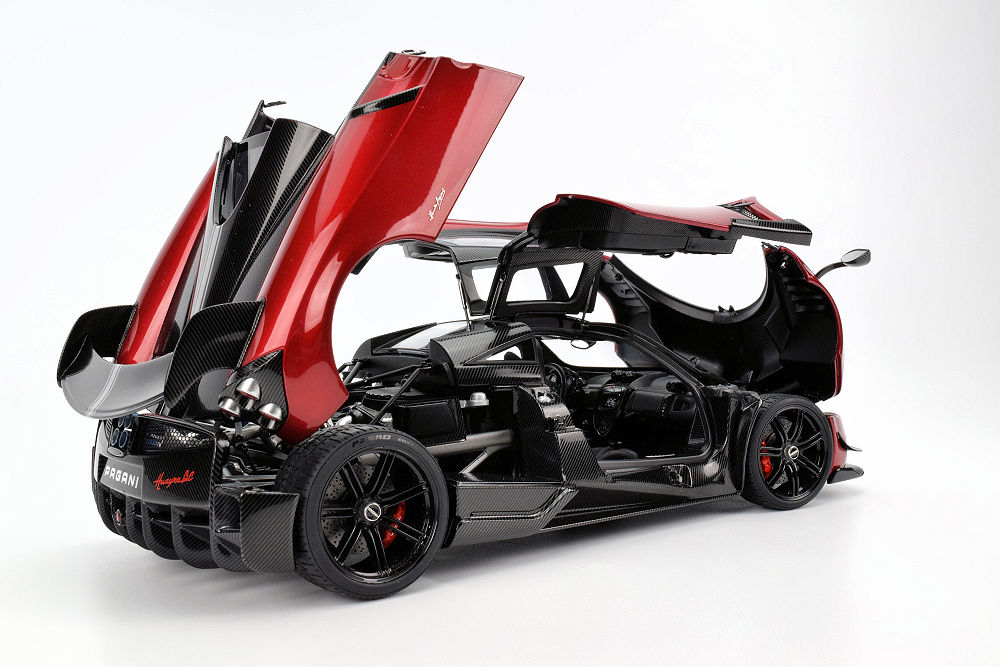 You will also have to install your side mirrors.  Installation was easy as 123…  No glue is necessary.  AUTOart also includes two sets of mirrors.

Unveiling the model from the exterior protective shell, we were shocked how brilliantly the colours popped on this model.  The Red and gloss carbon fibre is a beautiful marriage.  AUTOart’s workmanship on the carbon elements is absolutely delicious.  There are no visible signs of decal damage or defects of any nature found here.  Some customers have been reporting issues.  Seems QC could use a little help AUTOart. 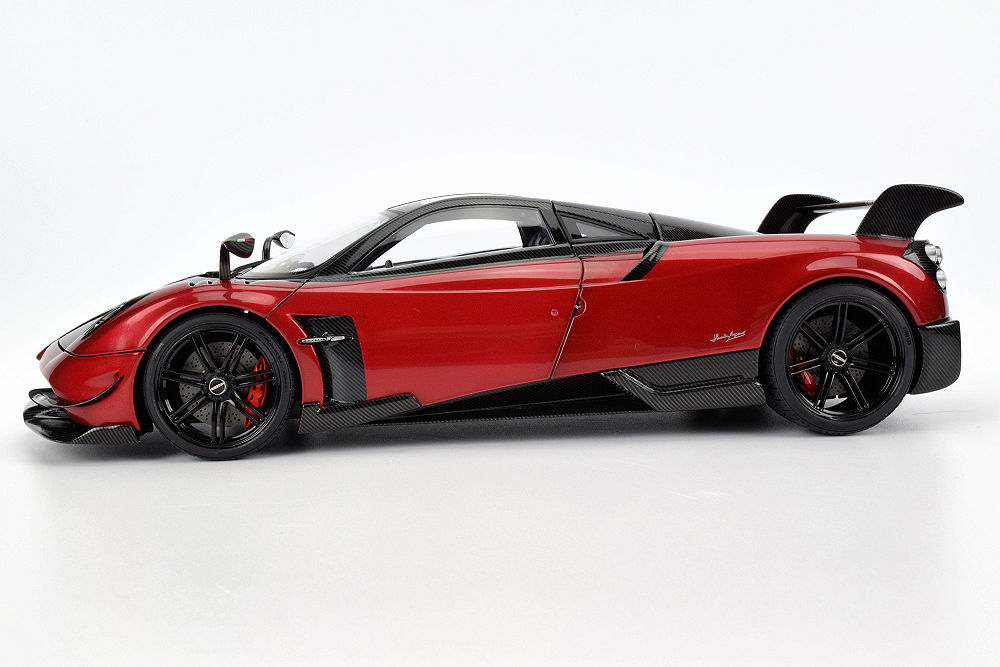 As for the exterior, we do question the Red transition from the mid-point to the rear.  Our example does show an obvious difference in the rear section as being darker in appearance.  What is funny, under “normal” lighting conditions one would have a hard time seeing this variance.  In the end, is this normal based on the lighting conditions and viewing angle?  Not 100% sure. 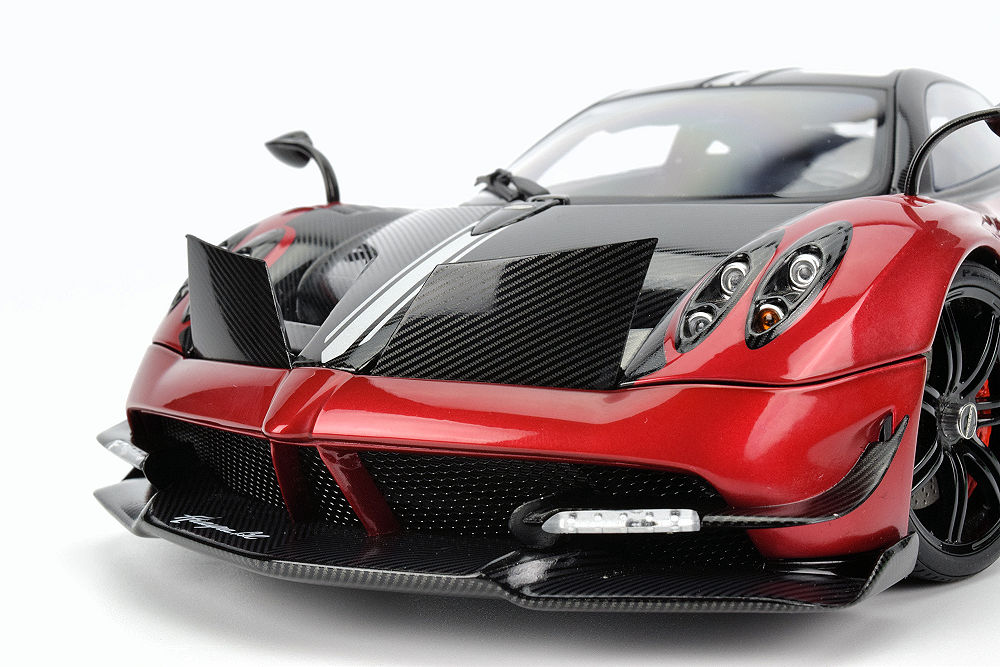 Moving to the front there is much to look at here.  First, the lower section is featuring more of the carbon look.  Note the Huayra BC decal to the left.  Just in behind there are opening to the back cooling.  These are capped with metal grilles.  Moving up the first thing we encounter is the functional aerodynamic fins.  Much easier to adjust than the first generation AUTOart Huayra but placing them in the desired position is somewhat challenging due to the weight and less residence as we saw with the first-gen. 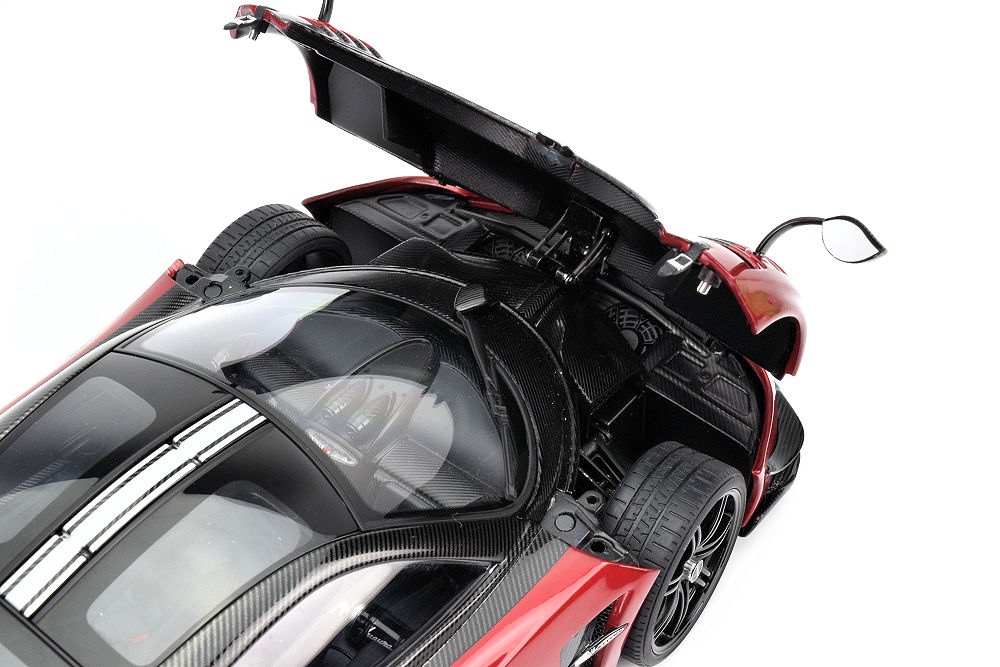 This is a FULL 360 access model and then some…  The forward sweeping hood is easy to access and positioning is done with ease.  Neat engineering work on the centre hinges.  The surrounding area and upper hatch are completed with a moulded carbon fibre look.  Suspension bits are visible from each side, the Blue spring pops against the dark carbon fibre.  Suspension compounds are a mix of metal and plastic; this is similar to the first-gen as well. 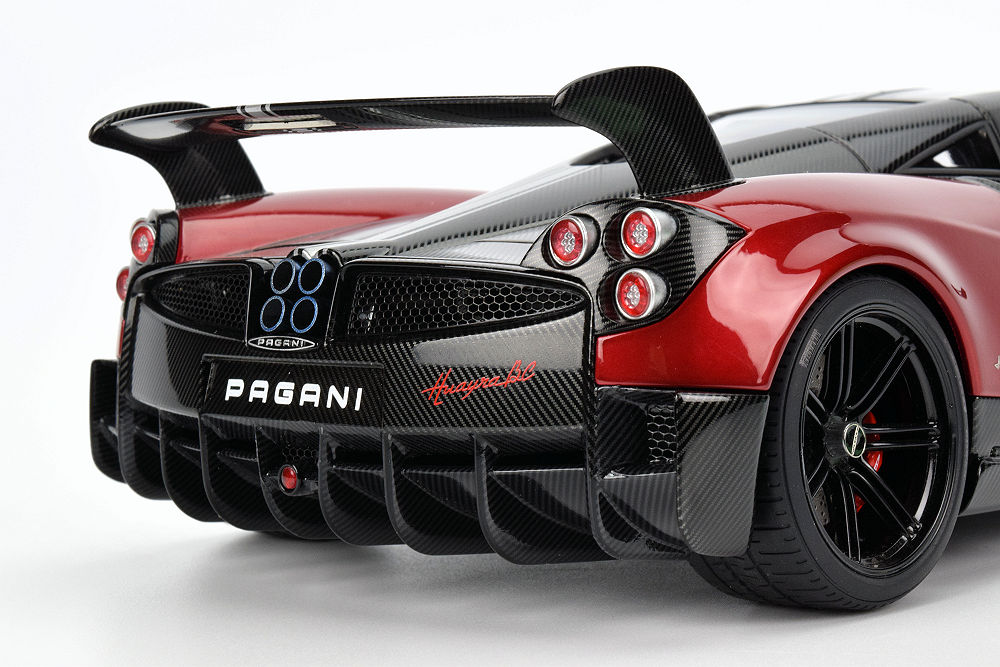 The rear section shines just as strong as the front.  Carbon fibre weave is genuine and the high gloss matches the mirror finish of the Red paint.  Larger upper spoiler is one of the styling cues that differentiate the BC from its older brother.  Blues around the quad exhaust tips add that touch of realism.  The lower opening is crafted with metal grilles if you shine a light through the Blue hues of the inside section of the exhaust scream through as well as other motor components.  Lower carbon fibre is crafted with decals and mirrors the other carbon fibre elements. 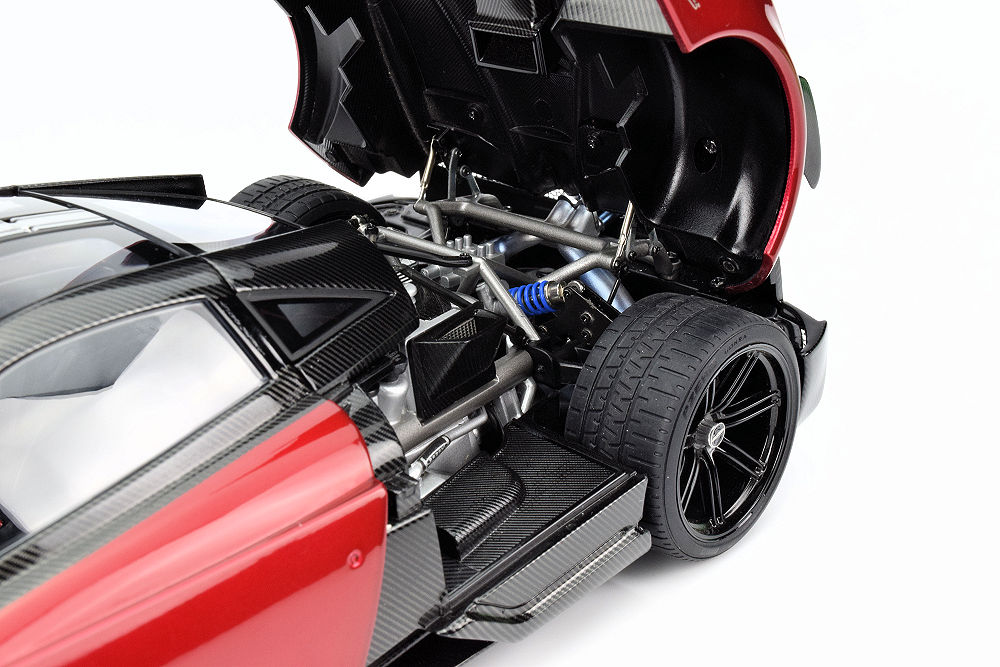 Access to the rear section is permitted.  Opening and closing the hatch is again done without issue.  We like to mention, with all the opening elements from front to rear the overall appearance of shutlines and panel gaps is excellent.  Before we go inside, we wanted to mention the rear functional fins.  The shutlines here are soooo tight it was near impossible for us to open.  Finally, after repeated tries and various aids we got one to open, we gave up on the second. 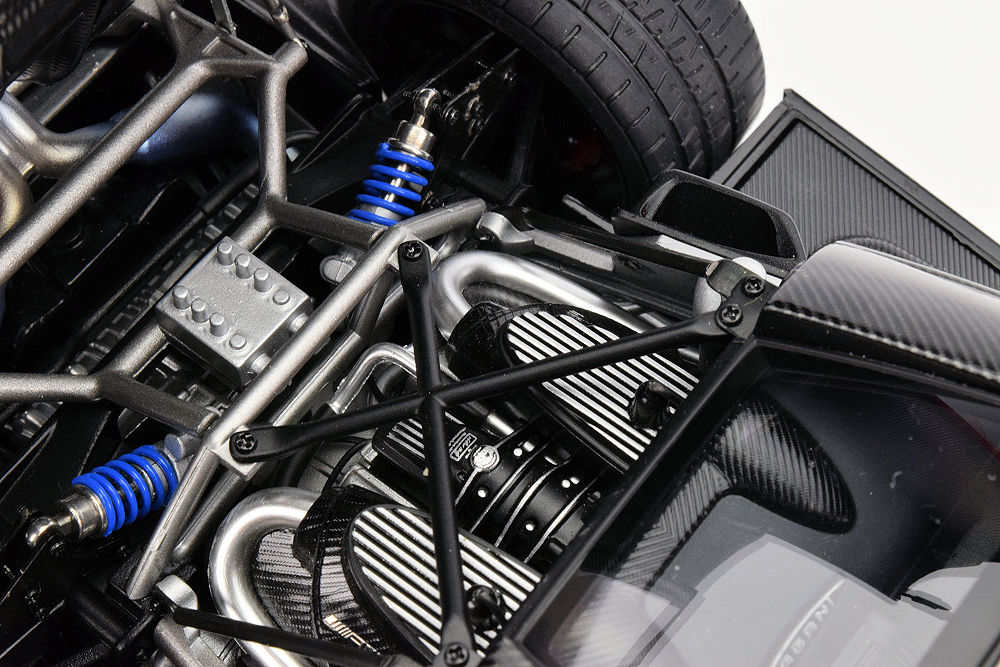 As for the motor we give it decent marks, basically the same as the first generation Huayra from AUTOart.  We’re not sure why there are allegations of it not on the same level.  We did a side by side comparison of the two.

It isn’t all good.  What we thought was weak was the side view of the motor block.  The original AUTOart Huayra these areas on either side were blocked by storage compartments, with the Huayra BC these are removed.  The view from a distance is good but on closer inspection, the turbos and related components could have used a little colour and texture to provide that level of realism, especially at this price point.  Also, the “lego” brick looking device near the centre is too basic based on the rest of the surrounding motor components.  And finally, the hand-built titanium exhaust is lacking the definition of each fitted and welded section. 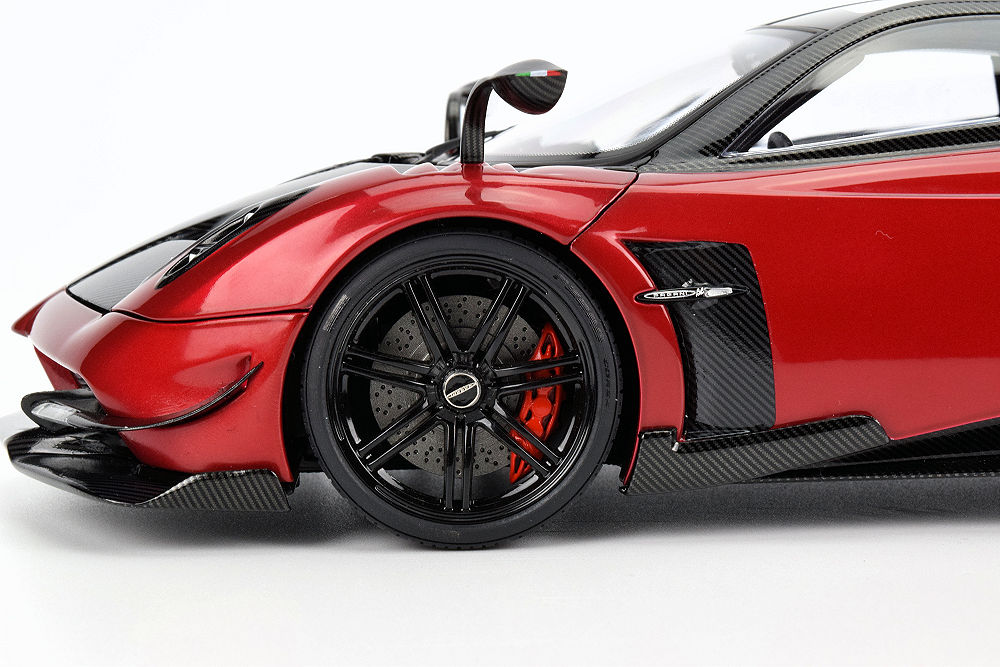 Wheels on the Huayra BC are in typical AUTOart form.  Just right!  Front and rear feature different sizes, the added script to the tires provide the added realism factor.  As for braking components, they are accurate to the original, the brake calipers are large and painted in Red.  We love the added Black shading added to the front calipers.  Very reminiscent of the original!

Access to the interior is achieved via the two up-swing doors.  Our example worked flawlessly and the gaps and shutlines as mentioned are some of the best we’ve seen with AUTOart to date. The interior is completed in Blacks and Greys.  If you’re looking for a splash of colour, look into the Silver exterior finish BC.  This example has Red accents bits, from the initial images it looks grand! 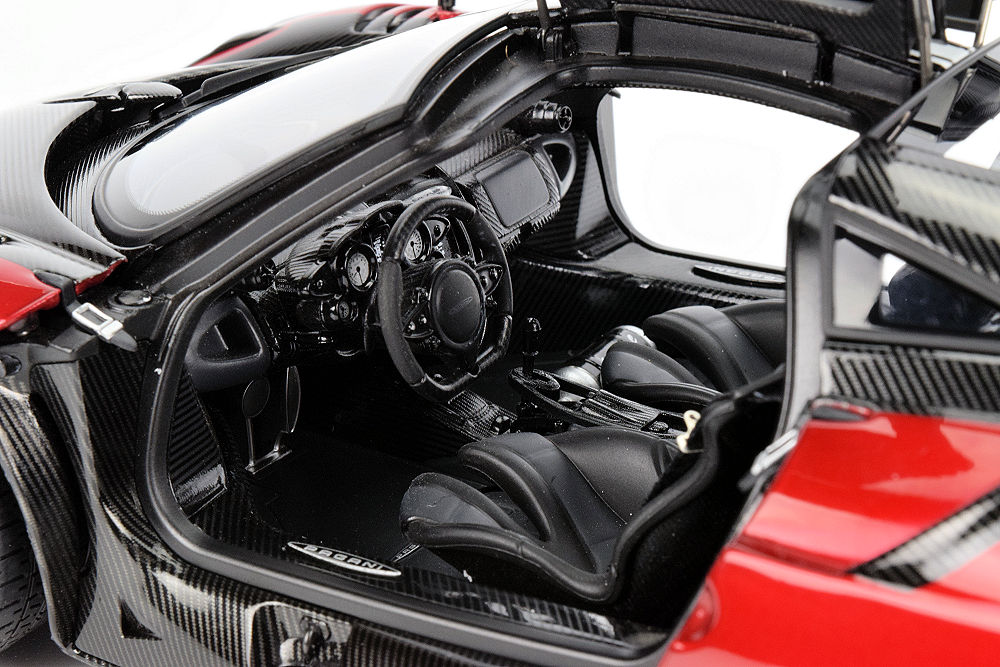 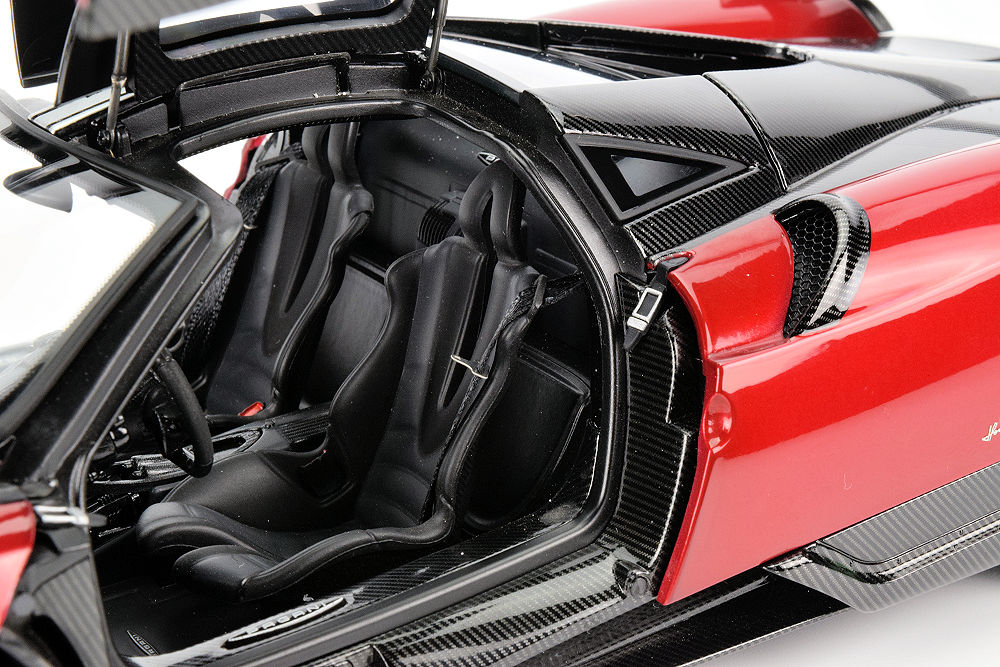 As for the interior elements themselves, AUTOart re-creates them with a mix of carbon decals, carbon mould and plastic in a Grey/Black tones.  We do like the use of carbon decals in the immediate surrounding of the door.  It definitely looks sharp!  The same is sparingly used inside though, the rest is more moulded carbon fibre and Grey plastic.  It doesn’t look bad but it doesn’t provide the over the top wow factor either.  Fabric seat-belts was a surprise too, as the team has shifted to synthetic rubber look with more of their recent offerings. 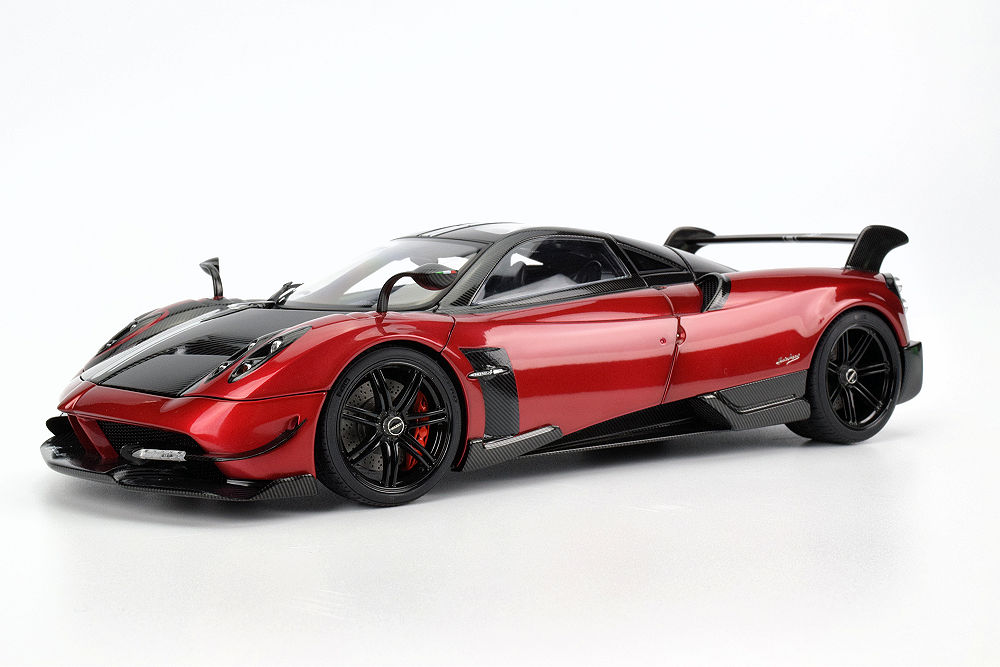 With the supercar replica market being fierce and sealed, resin models becoming the norm of the day it is refreshing to see a brand still take a leap into full 360 access models.  AUTOart’s delivery here is exceptional for the most part.  Those on the fence with composite as the base material for the exterior panels don’t lose any sleep, the model delivers and then some.  It is actually closer to the real thing than diecast metal would be.

Also, the slew of working parts works better than the first-generation replica for setting the position of doors, and related opening bits.  Overall shutlines and panel gaps are exceptional as and everything here works in harmony.  On the flip side, the motor and some interior elements could utilize a little more attention but overall each area keeps on pace.  AUTOart Pagani Huayra BC comes highly recommended.  Your most difficult choice would be what exterior colour to buy, as the list is long here.  Enjoy the pics!