The team here at DiecastSociety.com has always been fascinated with news from AutoCult Models but there hasn’t been a specimen to date a member of the team could truly get excited about.  Not that their assortment is boring, quite the opposite.  Our reason, AutoCult caters to the 1:43 scale segment of the hobby, which none of the immediate team members connects with…

Back in May their sister brand Aveneue43 announced a new sub-brand called Avenue18, and as you quested the focus is solely on 1:18 and their first example would feature the Audi PB18 e-tron Concept.  Now that is something we can sink our teeth into; first, it’s a Concept and second, it’s an Audi, something rare in 1:18 scale.

The Audi PB18 e-tron Concept was originally unveiled at the Pebble Beach car show back in 2018.  Originally keyed as a design study, in 2019 Audi decided a limited run of 50 would go into production.  Did this ever happen?  Not sure…  Is this the first electric “supercar” with hatchback and practically in mind, maybe! 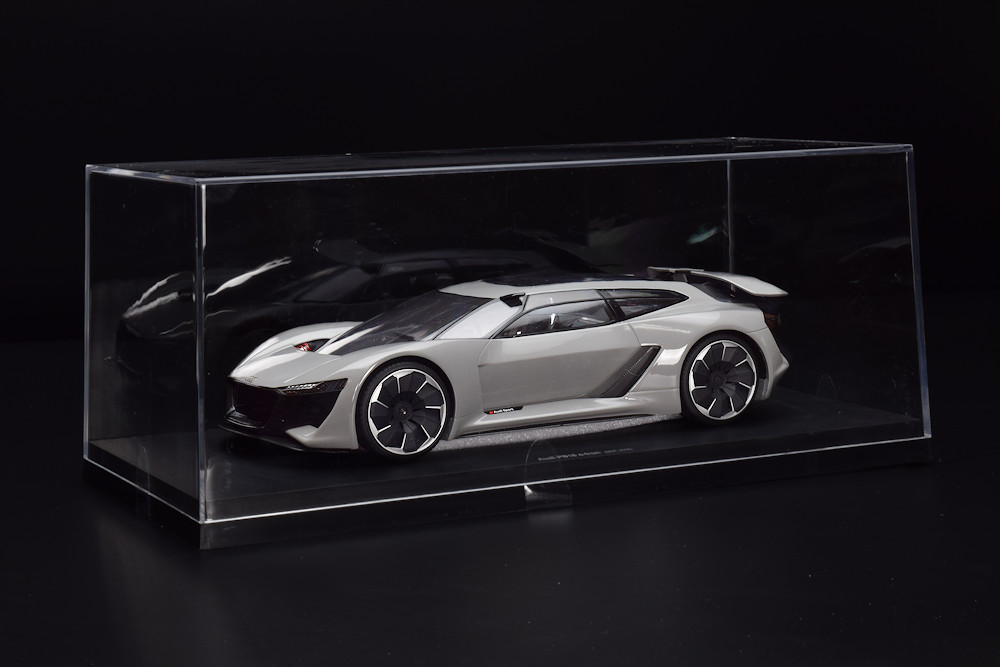 Fast forward to August 2021 the sample is now in hand!  And it will be the basis for the review here today.  First, if you are not familiar with Avenue43 or 18, it is to our understanding they are a sub-brand of AutoCult Models, with a continued focus on rare and unusual specimens of European car culture but priced slightly cheaper than big brother.  Each is executed in static form.

That brings us to the price.  The Aveune18 Audi PB18 e-tron Concept isn’t cheap about 239 Euros for a static resin example.  In compassion, a typical GT Spirit is around 119 Euros while exclusive and low production brand DNA Collectibles is roughly 159 Euros.  That is almost double that of GT Spirit.  Is it double the detail?  Read on!

It is always customary that the first review of any brand highlights the packaging, so let’s start here.  The exterior side is covered with a semi-complete box shell in Blue and Black with Avenue18 logos.  Inside the model comes secured to a plastic base with “Audi PB18 e-tron Concept 2018” branded on the front side.  There is also a protective cover.  The package definitely resembles the same found on a conventional 1:43 scale offering from various brands.  Very unique we must say!  Though the idea is cool and some might appreciate the added display the overall quality of the two pieces is quite poor. 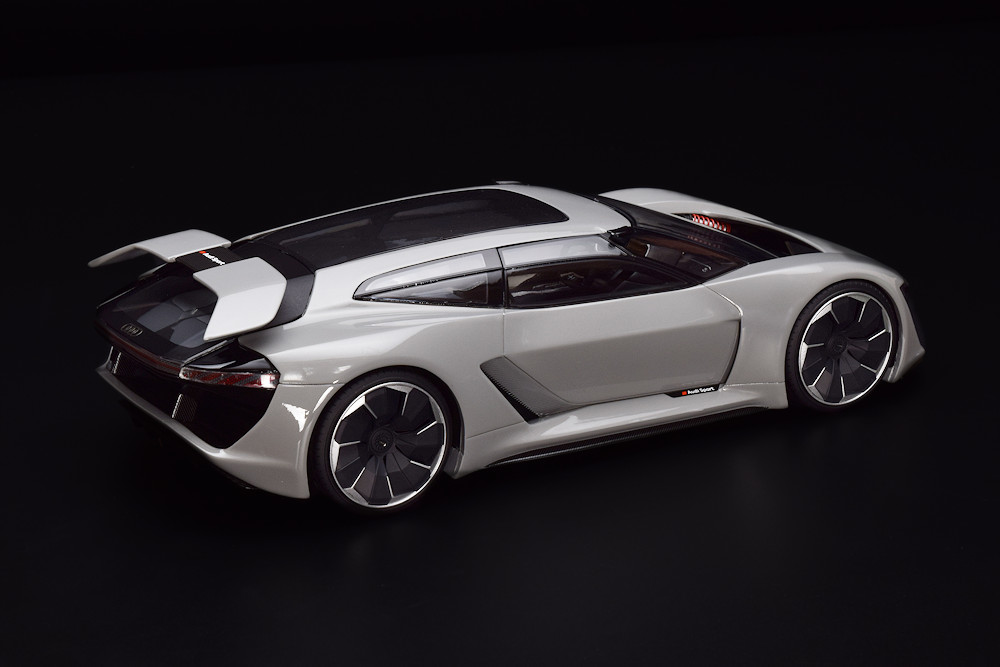 Out of the box, the Audi PB18 e-tron Concept looks like a spaceship!  The styling and design are quite boxy in looks but definitely emits some genuine shelf presence.  Avenue18 decided their replica would highlight the functional rear spoiler in the fully open position, a wise choice in our opinion.

Solid marks to Avenue18 on executing the overall design, it looks quite accurate for the most part.  Being resin and static the shut lines and panel gaps are very good.  A notable mention and a positive one is their decision to use a thicker material on the multiple windows, all windows on our example are perfectly fitted with no gaps or warping. 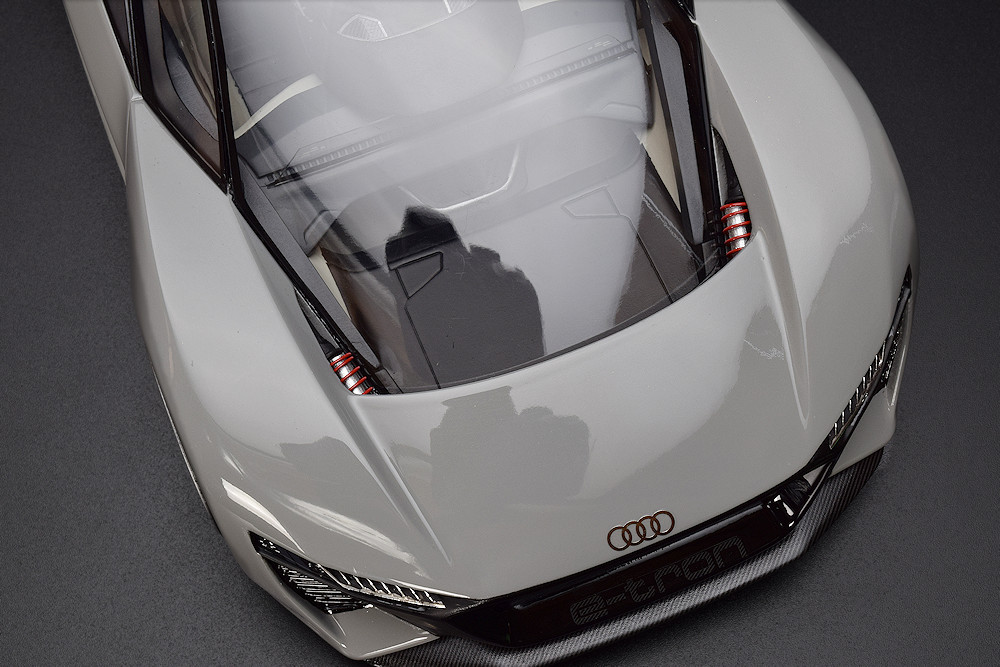 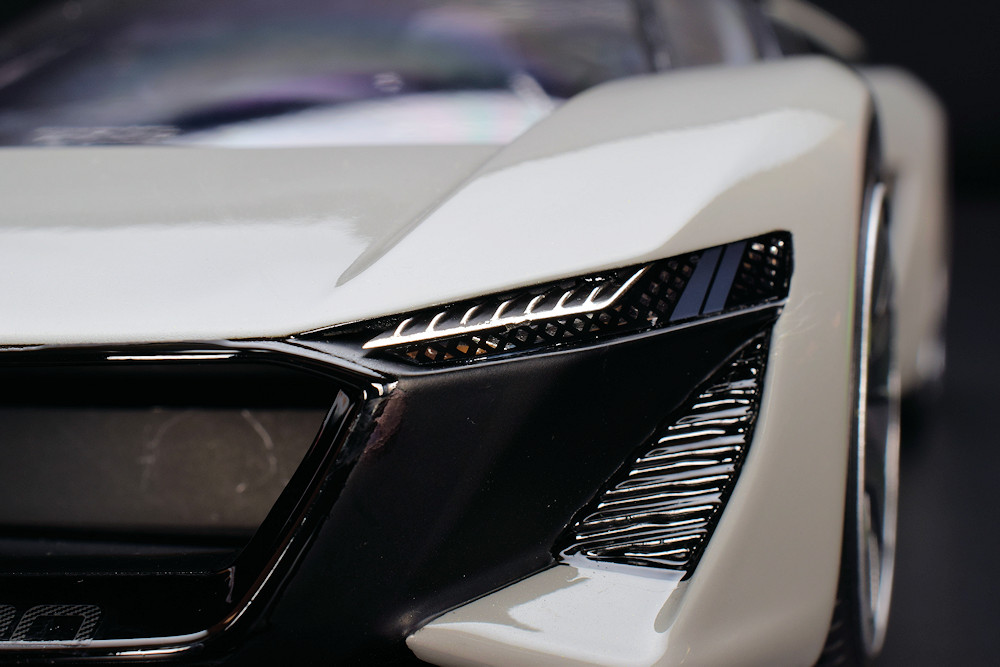 The front is dominated by a larger centre opening, that mimics a whale shark at feeding.  Good marks to Avenue18 on the carbon fibre detail and headlights.  On the negative side, the side venting on the left and right are poorly executed, each requires more definition and less paint – see above photo.  You can clearly see Black paint is too thick.  Also, at this price point for a static model the centre, Audi rings should have been 3D-like rather than the simple flat decal. 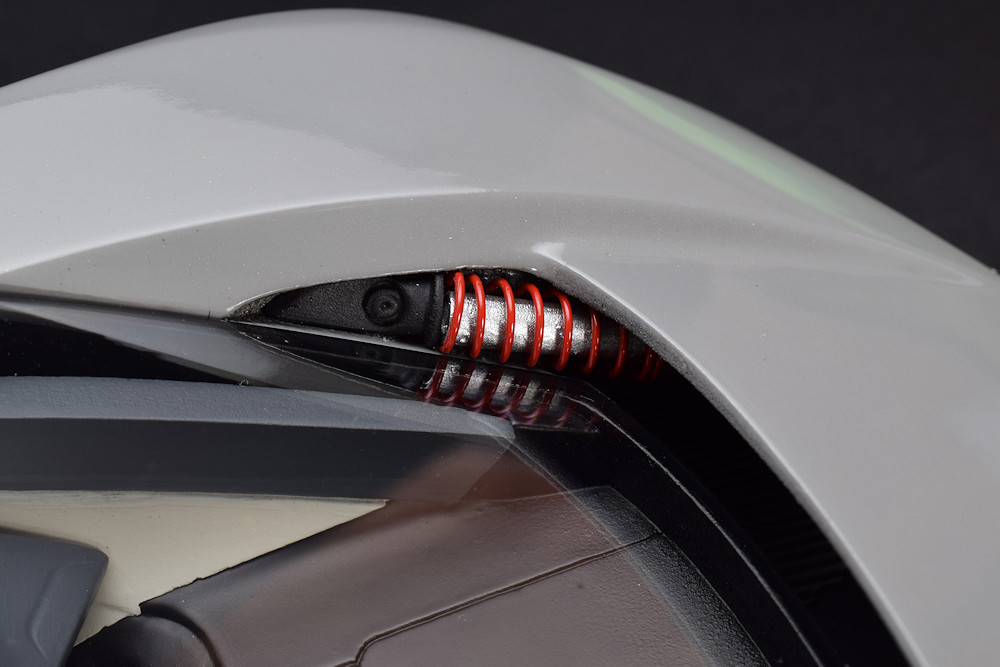 Moving forward the upper section of the hood does expose some of the suspension bits.  Sturt and spring, one on either side.  Well done!

Moving to the rear, the first piece you will encounter is the rear wing.  As mentioned, Avenue18 has chosen to display it in the open position.  Good marks on the upper side in terms of overall appearance, though from below the supporting struts and related apparatus are quite primitive (based on the original design) for a static model at this price. 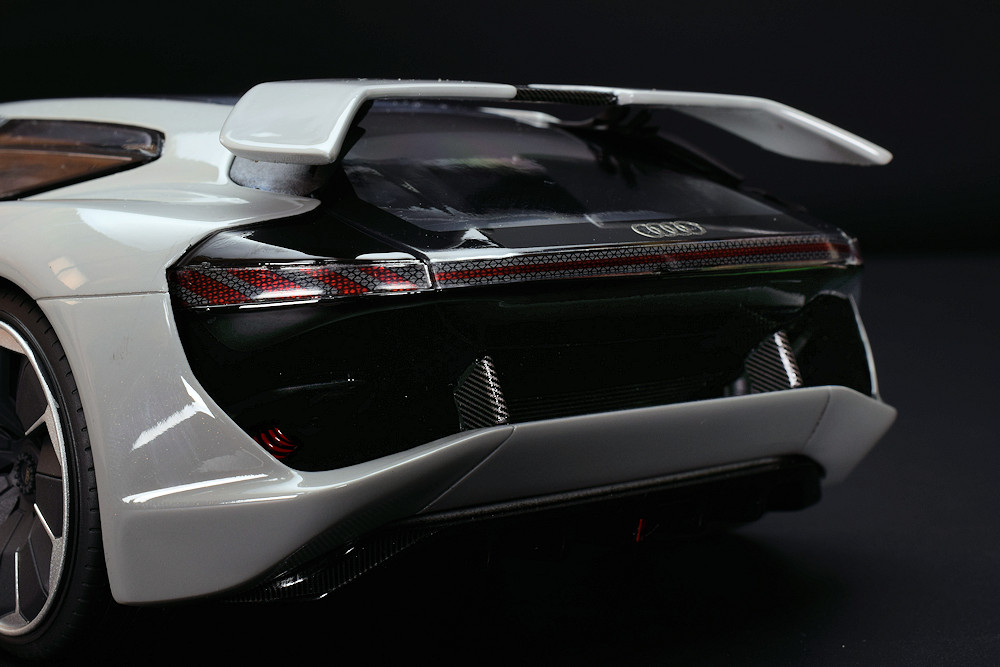 The rear side is on par with the front. If you look close the opening on either side once again exposes some of the suspension bits and also provides a glimpse of the massive rear rollers.  Carbon fibre work is once again well done and centre, the lower brake light is found in Red. 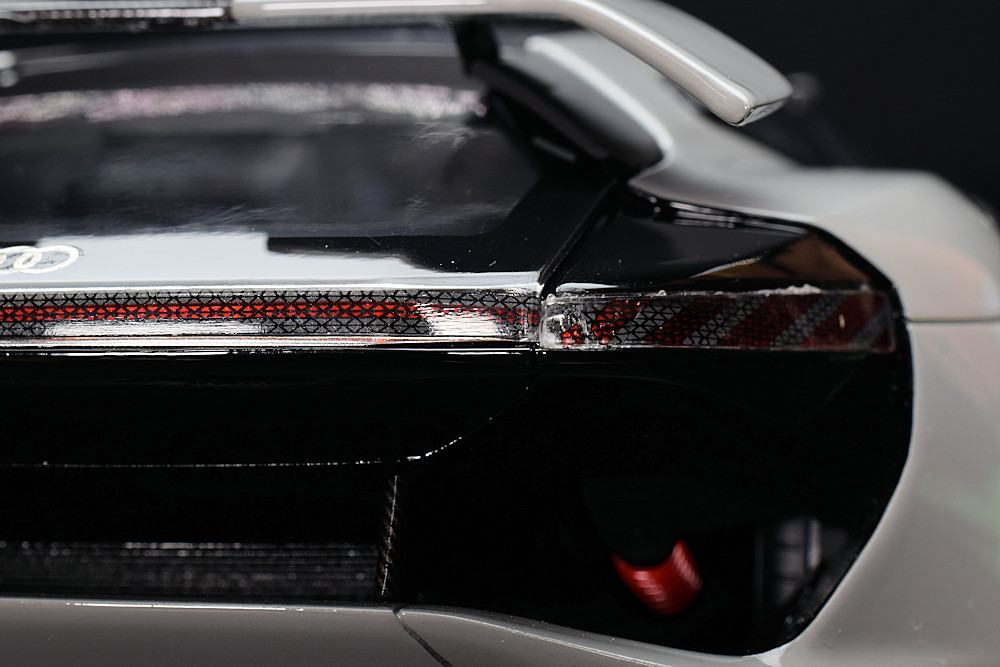 On the negative side, poor QC on the rear taillight lighting strip.  The right side is a little rough around the edges. – see above photo.  And once again, a simple decal completes the Audi rings.  Also, Avenue18 took some liberties with the size of the lower section on the rear bumper, the lip does not extend quite forward as the original design should. 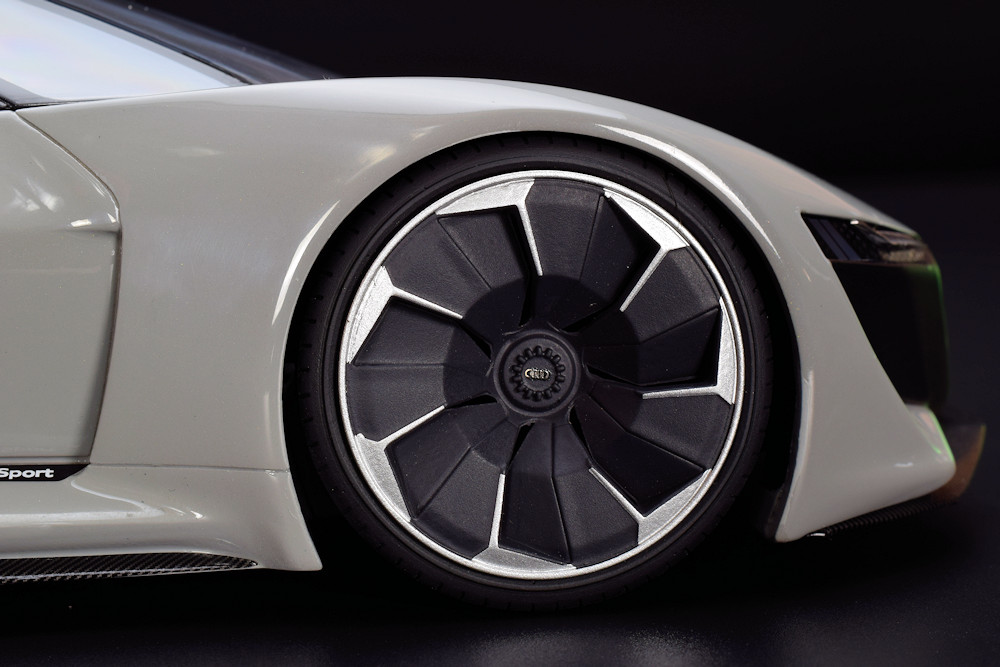 The Audi PB18 e-tron Concept wheels are on par with the original car.  Even the Audi logo in the centre is included.  Though we find the sidewall too small and there is no appliable tire branding either.

Inside the cockpit, the Audi PB18 e-tron Concept provides seating for one.  The seat is found in the centre and once the driver opens the door the seat will automatically travel to the right to allow the driver to enter.  For the most part, the interior detail is okay and what Avenue18 provides at first glance will suffice most.  We do like the detailing appliable to the steering wheel and surrounding area.  But… 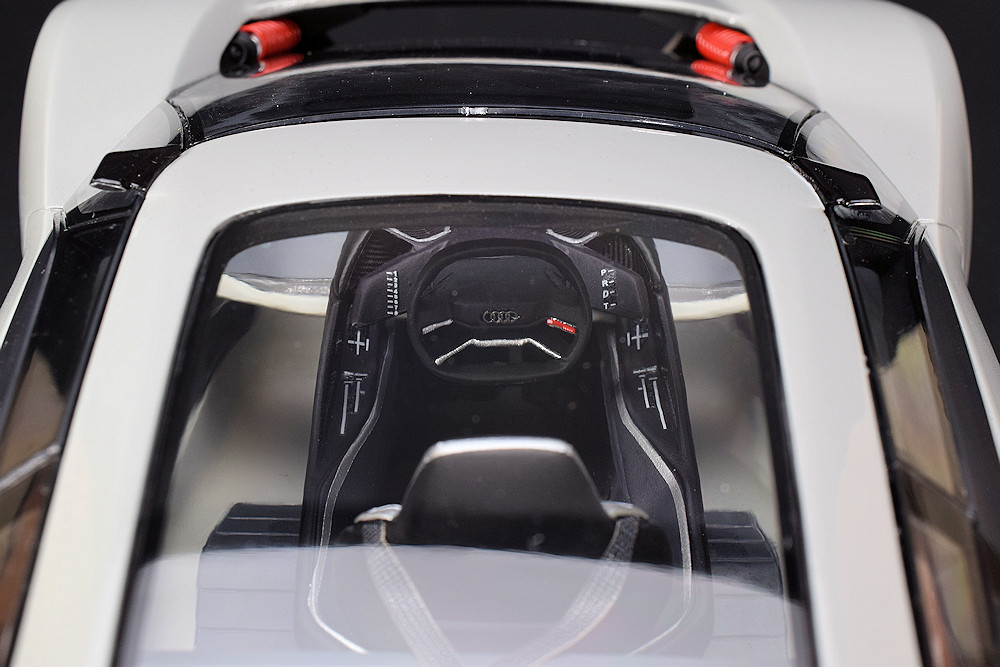 Even the mounting points on the upper seat-belt connection that is interpreted by Aveneue18 are inadequate.  As mentioned the car has a power-assisted seat, upon opening the seat-belt apparatus and driver seat moves towards the opened door.  This connection point should have been hidden underneath an opening/slot – see photo below. 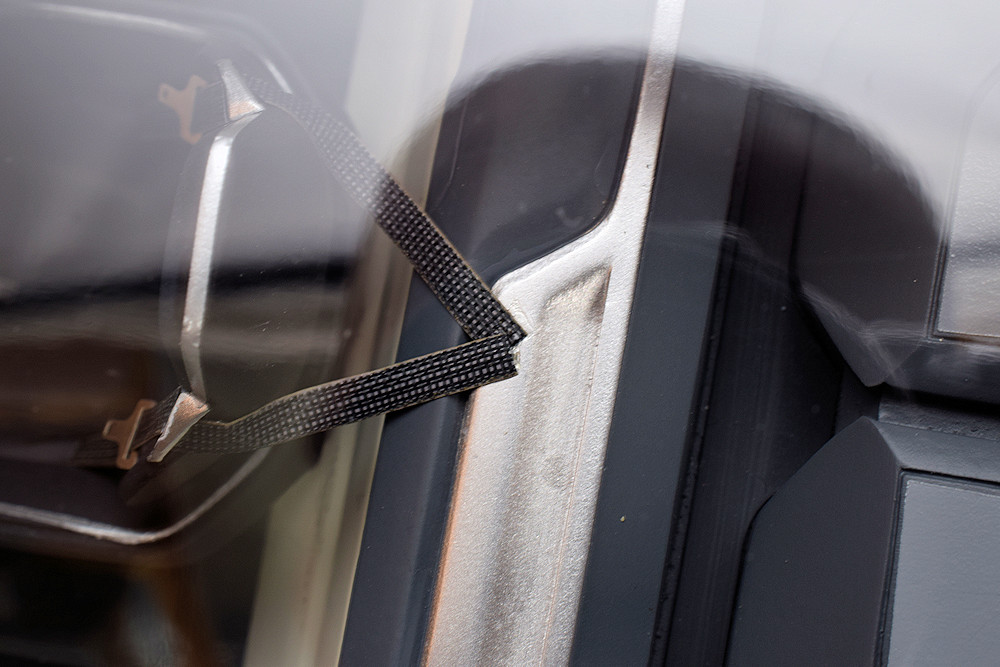 Under closer inspection, we reveal the bare minimum is done.  None of the creature comforts of a solid static model are found, well almost.  These include no use of texture or fabrics for the various interior parts, these include Alcantara for the steering wheel and seat and fabric on the front and rear pillars.  The only exception is the fabric seat belts, which aren’t 100% correct either.  Missing is the Red stitching and inaccurate mounting point on the lower seat section.  Metal buckles are included but do not mirror the original design at all. 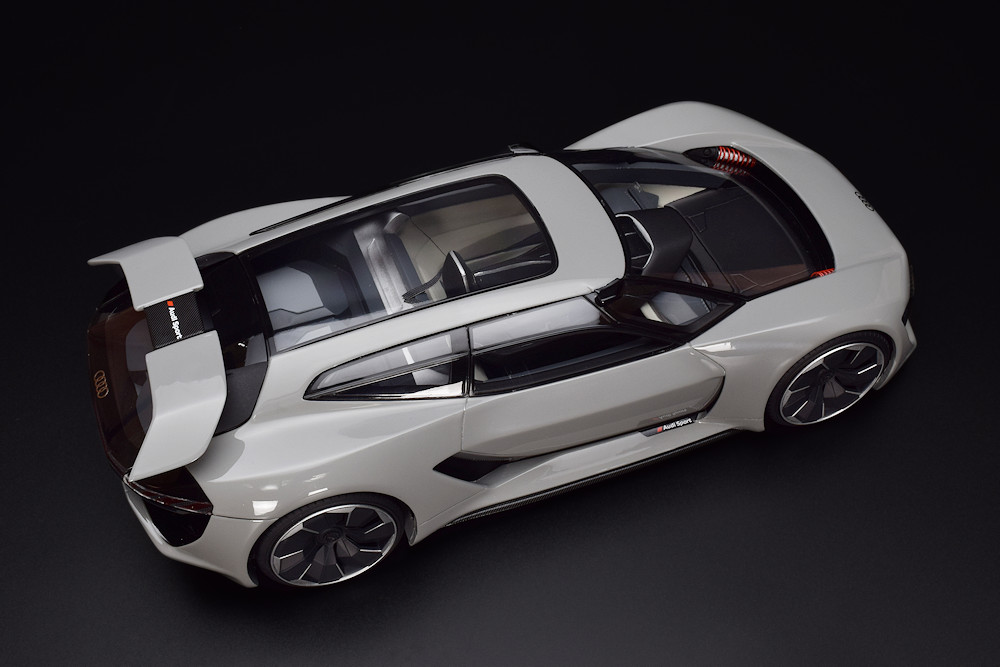 What the Avenue18 Audi PB18 e-tron Concept has going for it is exclusively and low production, from what we gather about 300 pieces will be produced.  Unusual and rare, that’s a plus.  Outside of this, the premium-priced static example falls quite short on the exterior and interior for overall refinement and accuracy.  And not to mention the QC piece with the rear taillights.  Unless you are a true diehard Audi fan or Concept collector, we would not give this example from Avenue18 further consideration.  We would also suggest they remove the base and cover.  Take these saving and either reduce the price or refine the model so they can truly justify the piece.  Enjoy the pics!