When fellow DiecastSociety.com member Lucky13 reviewed the Hotwheels Elite LaFerrari, the verdict was: “if you want the best LaFerrari in 1:18, either have this one reworked or go resin.” Almost six years have gone by before the same manufacturer who back then was the resin benchmark has now released a diecast contender. 6 Years in which prices have soared raising expectations with it. So, does this 300 Euro LaFerrari translate all the good features of BBR´s resin LaFerraris into diecast and thus take the title of “Best 1:18 Laferrari”? 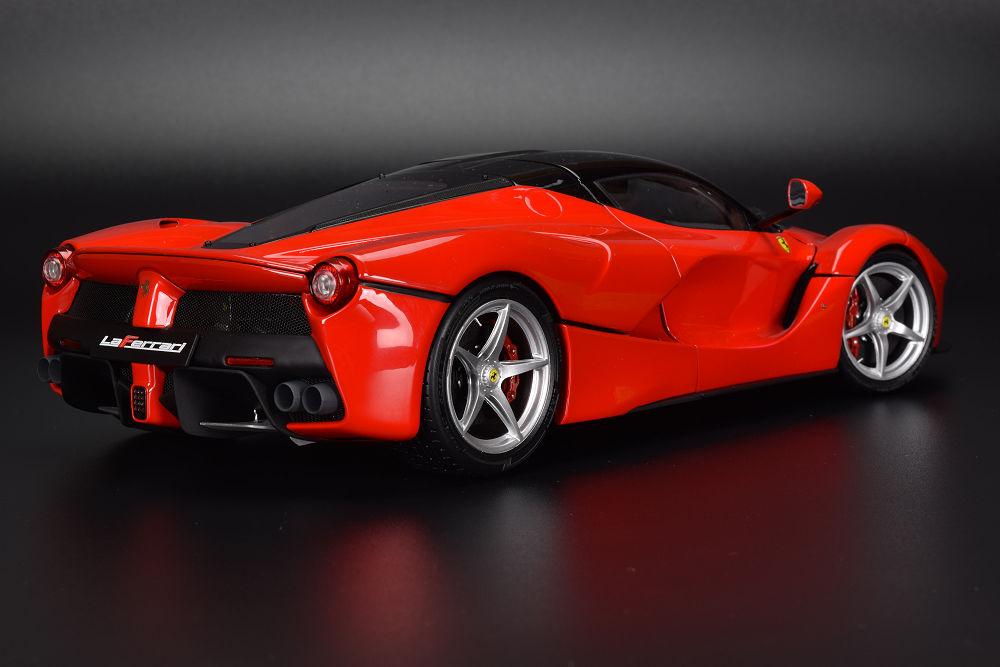 As you might expect, it does not fail on the basic requirements like general shape, proportions and stance, how could it? The Hotwheels Elite had issues with paint bleed on separation lines that are non-existent on the BBR, the Rosso Corsa is applied smoothly and consistently, the black sharply separated. On the doors, this is achieved by making the bottom sill a separate piece of black. While Mattel´s entire door shape was meticulously diagnosed to be ultimately wrong, BBR has faithfully replicated the complex door shapes. The doors´ hinge mechanism is superior, too: A mini dogleg disappears without an unseemly screw visible underneath the headliner, the other hinge is lifted on an extremely long, delicate, but functional strut. 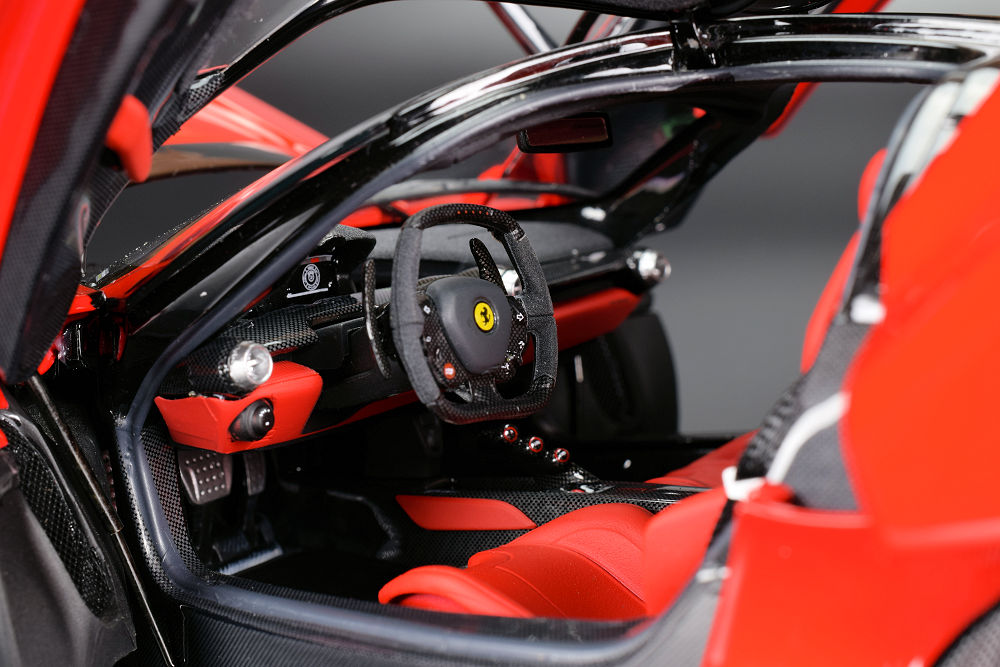 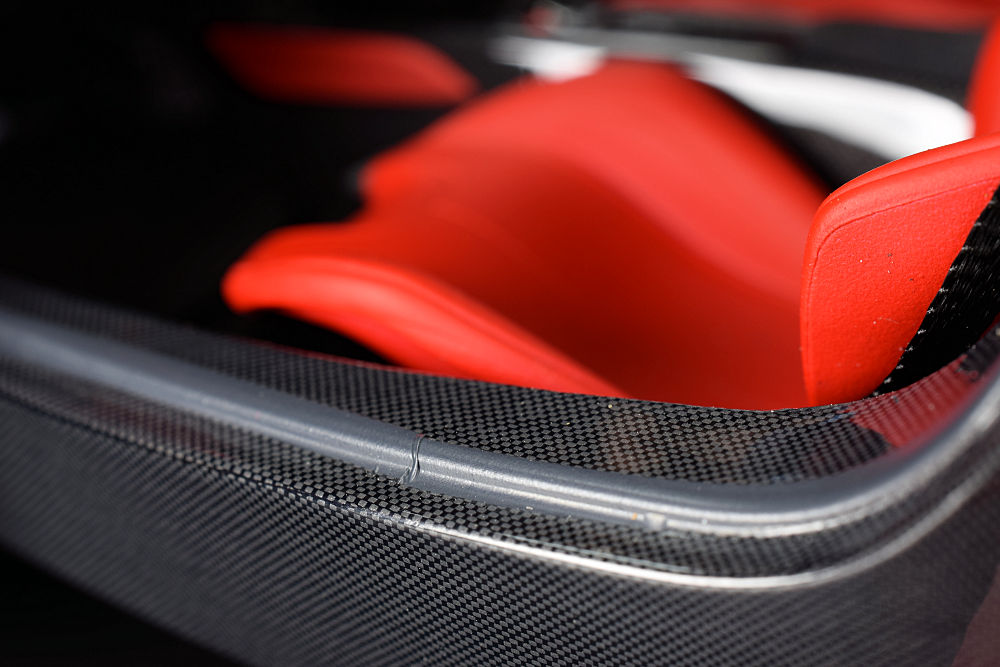 While having the door wide open, you can´t help admiring the splendid interior. Cloth seatbelts with photo-etched buckles are obligatory and not worth mentioning. But BBR convincingly creates the illusion of the differently coloured materials: high gloss carbon, less shiny red leather, faux fluffiness of Alcantara, shiny alloy air vents. The full carbon tub floor has matte black leather-like floormats. The famously moving pedal box has nicely detailed silver pedals on them. This seamlessly assembled mix of materials is particularly remarkable on the steering, err, wheel, but while the engine start button is correctly red, the Manettino is strangely enough not and while the LED rev-counter is replicated on the top rim, the alloy plate that you can have individually engraved is completely absent. On the passenger side, you find the minute script “LaFerrari”, a tiny (wrongly) silver key stuck in the ignition, a red hazard button in the centre console, the three buttons encircled in red on this centre fin, an Italian flag badge dead centre between the air vents, but the “limited edition1/499” badge on the upright bulky carbon separation between the seats is absent – at least from mine. So two words of warning: #1 The attention of detail in BBRs is so great that these details famously fall off. #2 This review is based on my model, not the one in the pictures. 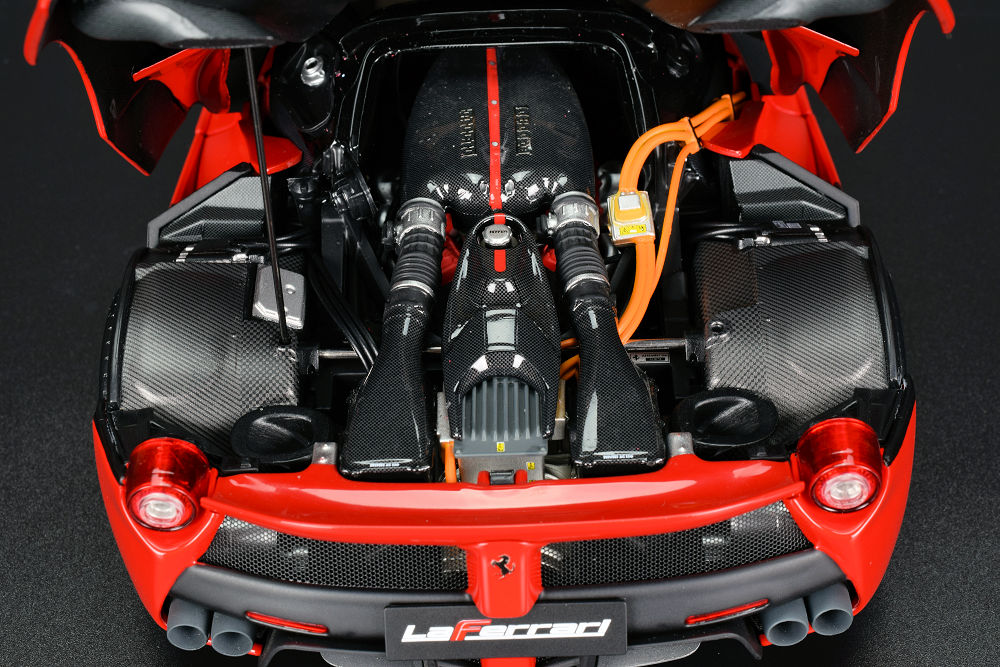 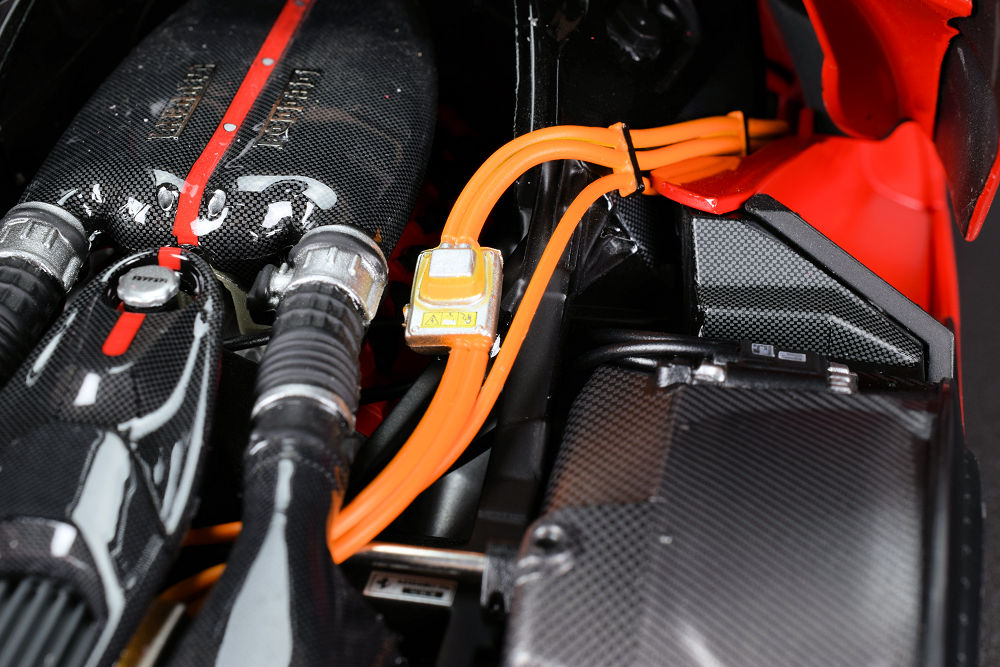 So we´ll climb back out of this impressive, but not perfect interior and turn to the engine. Like with Mattel the transparent engine display cover does not open, only the entire engine cover can be lifted and propped up by two metal rods supplied in a small bag. Here too a high gloss carbon dazzles you when the Hotwheels only offered moulded plastic to replicate it. A duller version covers the wheel arches while Mattel´s were just black. All the tiny lids are so much more refined and everything has illegibly tiny badges and scripts, including the KERS components. Simply great here while irredeemable with any amount of rework on the Elite. 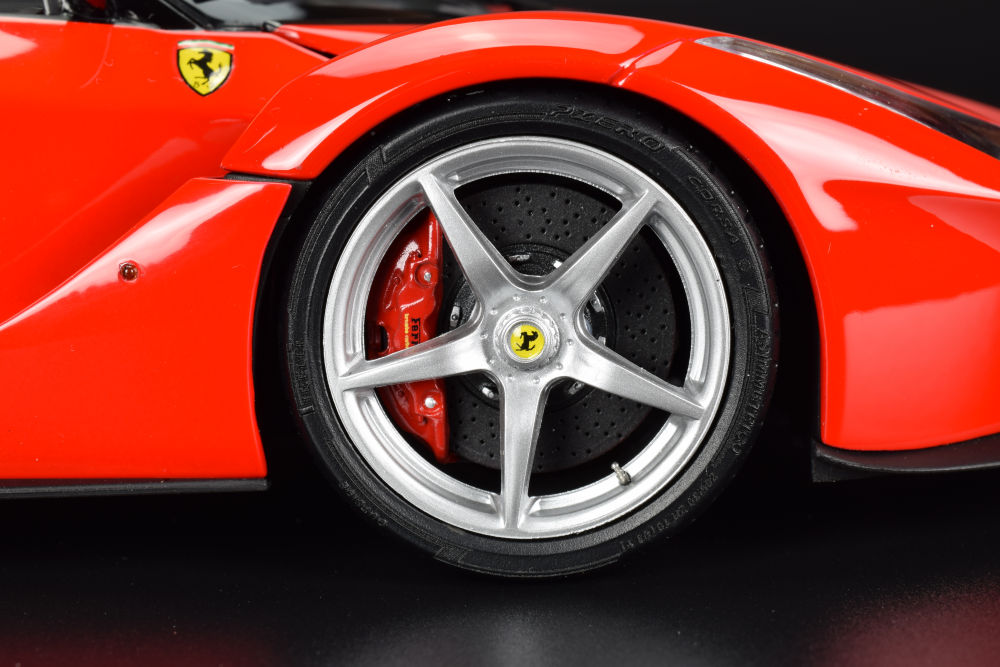 The wheels are excellent too. Tires are branded Pirellis whose apparently separate valves protrude from the delicate alloy rims behind which the drilled carbon brake discs may appear a shade too black, while the giant calipers are entirely credible as far as I can tell from media coverage. 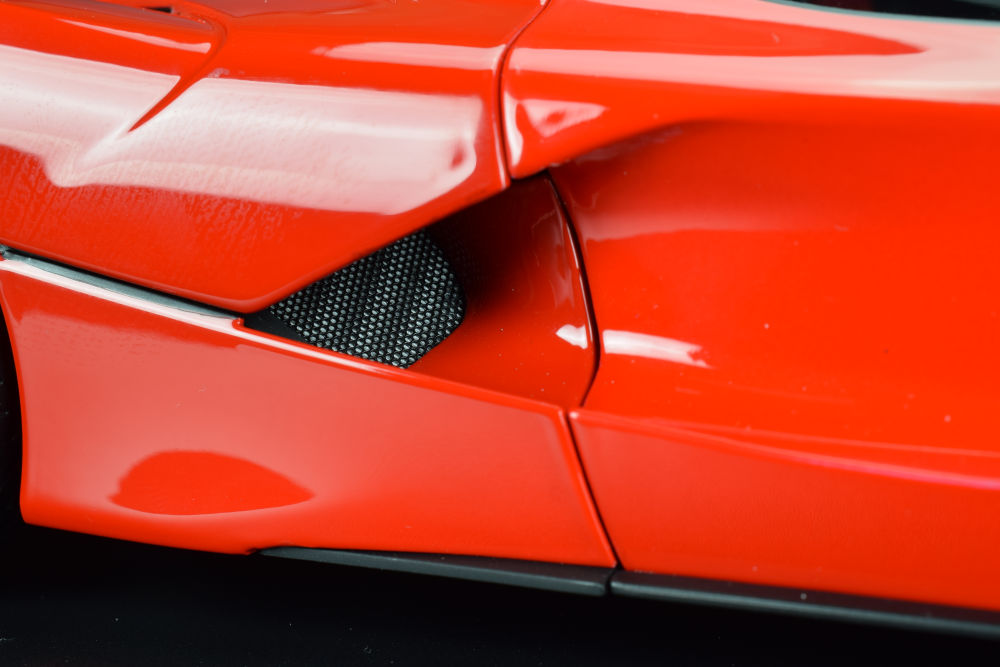 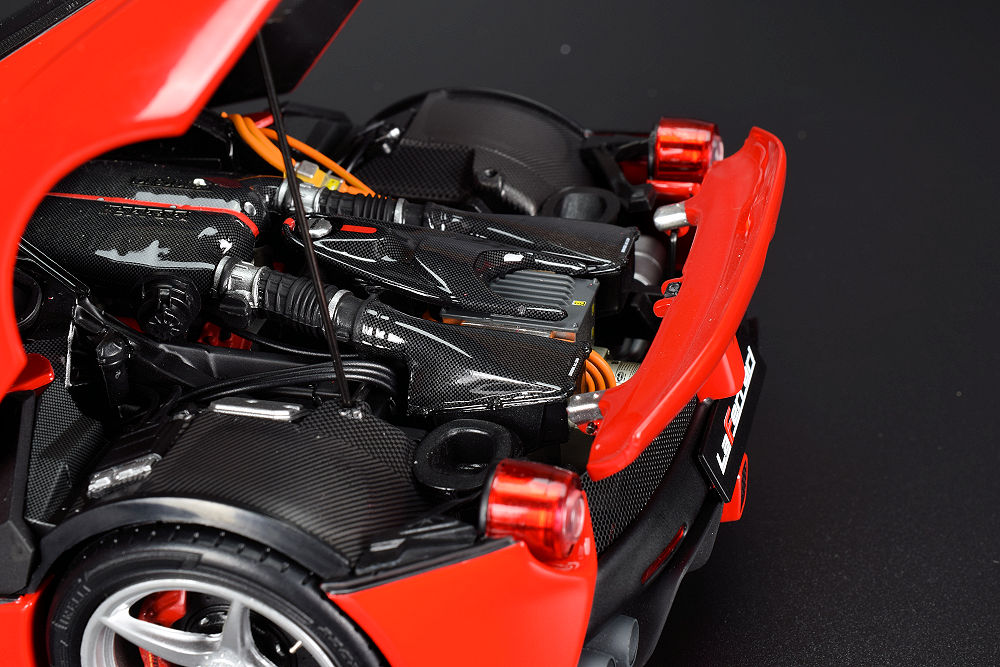 All the air intakes and outlets, wherever on the model, are photo-etched break-thru, no plates, no short-cuts. The prancing horse Scuderia shields and hood emblem are pleasantly bulging, with the hood emblem being a separate piece while the shields are decals stuck onto a bulge moulded into the doors themselves. And of course, you get the signature photo-etched Cavallino rampant and a Ferrari script on the back. The quadruple exhaust pipes are the matte black option, thin, deep, credible. The aerodynamic flaps are so delicate that I won´t try whether they are operational. The model´s operation manual leaflet does not mention it but informs us that the active air brake spoiler really is active, to be manually deployed and retracted with the utmost caution (and I strongly recommend to strictly adhere to BBR´s instruction with the delicacy of their models). 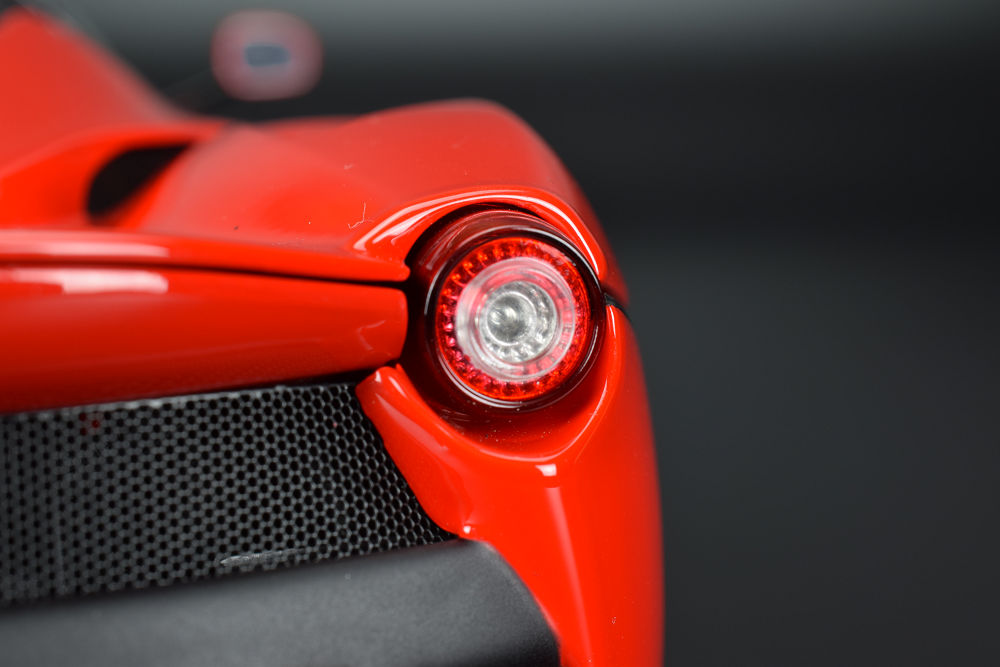 The lights are extremely detailed, front and rear, with tiny LED dots visible rear and a clean and clear colour separation between the white and red cover sections, plus a well-defined centre racing light cluster down the centre. On the front headlights, the projector assembly and LED clusters are equally well done, while the mounting of the clear cover is regrettably visible upfront. Pop the front hood and – you´ve guessed it – more carbon round the nice cooling fans and white liquid lids. 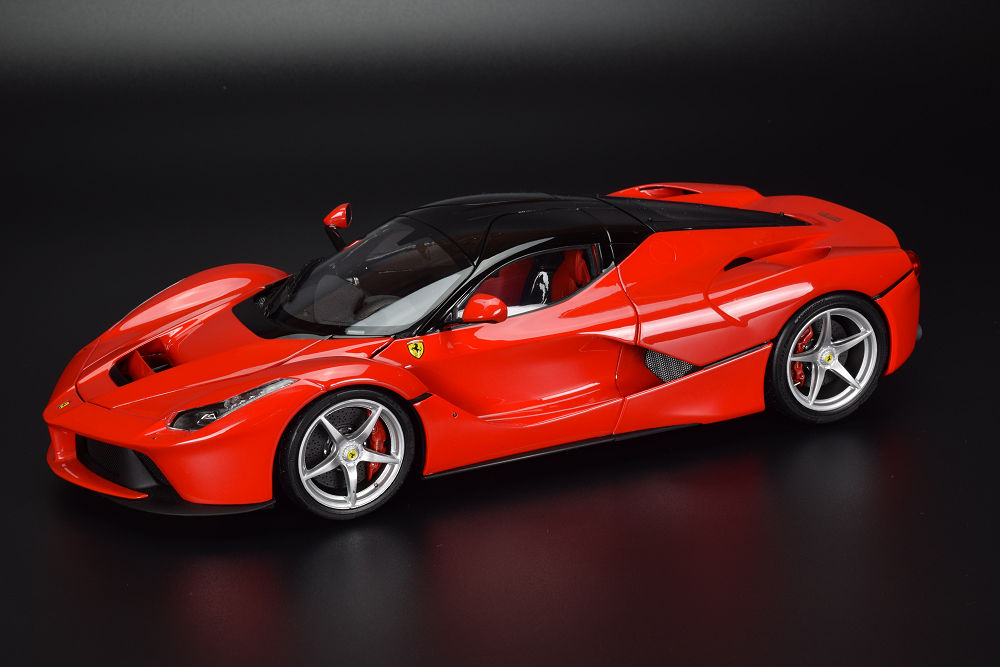 However, that´s about it with the carbon. I personally don´t mind them having taken the red option for the insect-like wing mirrors, but I sorely miss the carbon on the front splitter and wide rear section around the licence plate. There the BBR is no better than the Elite. They were so generous with their nice glossy carbon, you cannot help it but feel somewhat disappointed by the dull black they have chosen for this, especially as we all know how well they can do it from their resin LaFerraris. There is a sense of betrayal, that it was wantonly denied you. The samples in last year´s preview here on DS showed carbon on the front bits, the final product now does not. Even though it may not be incorrect at all, but merely optional, but somehow it makes you feel they have run out of carbon and dropped the ball unless they have deliberately reserved it as the last argument left to go resin – or for a future updated release, which would irritate early buyer birds. 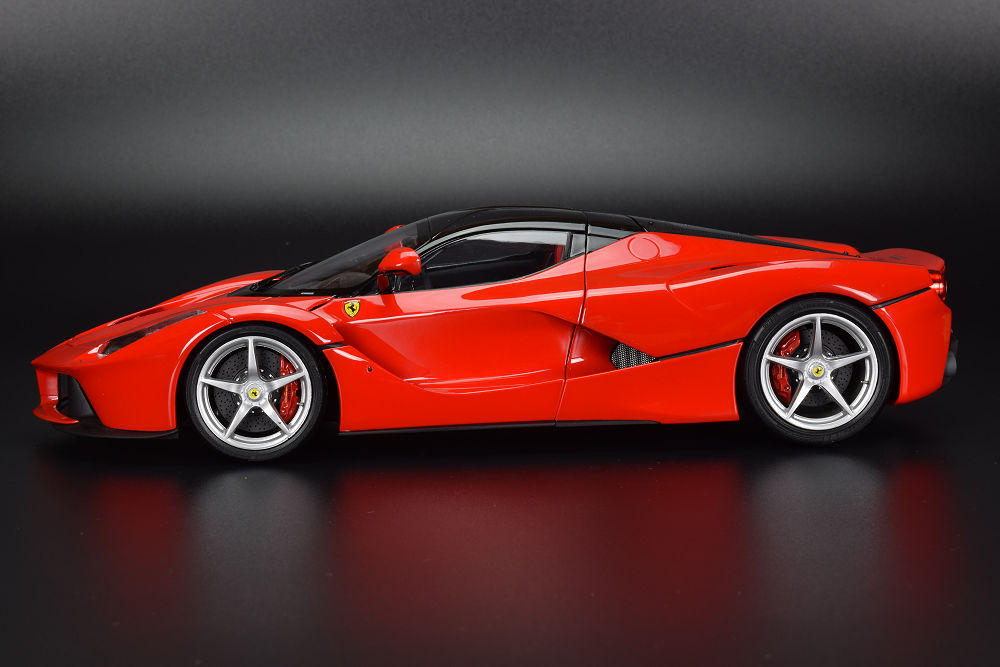 It is more this than the other rather neglectable idiosyncrasies that keep me from unreservedly and unhesitatingly passing the crown of “best 1:18 LaFerrari” to this model. You´ll certainly agree that the Hotwheels, while remaining a good model, is dethroned, even if expertly reworked and modified. But would you crown this BBR diecast “LaFerrari ultima in scala”? Or would you still go resin?