I need to start this review with sort of a disclaimer. LOL I did not have much time so it will be somewhat short. Also I did not have the patience to fight the dust that kept being blown on the model during the pictures, neither I had the time to touch up the pictures to edit it out, so my apologies for that.  Here goes it……

This is a model from the ‘Race and Play’ series from Bburago. As such, it is marketed as a toy, suitable for children ages 3 and up. It is priced at a cool $37. Just as a contrast I would like to add that my kids are allowed to eat fast food once a month. Last night they asked to eat Taco Bell. The bill for the two of them and me was $45.

The model grabs you from the box as just looking “right”. 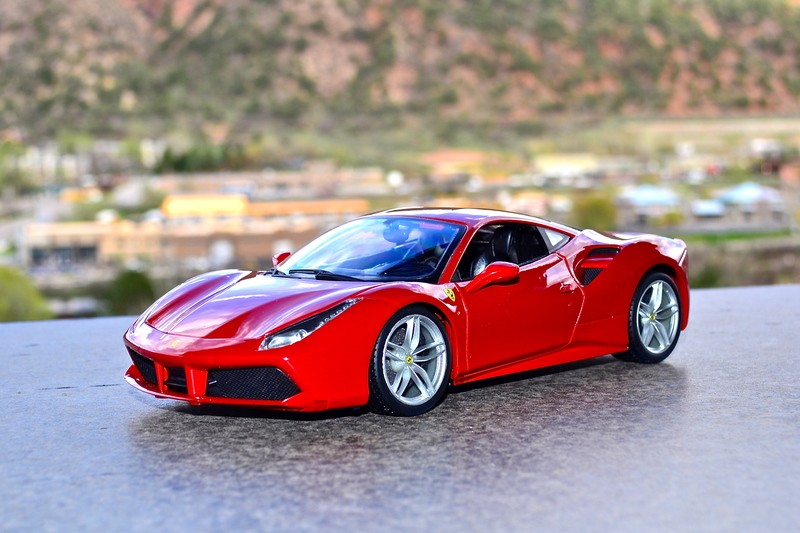 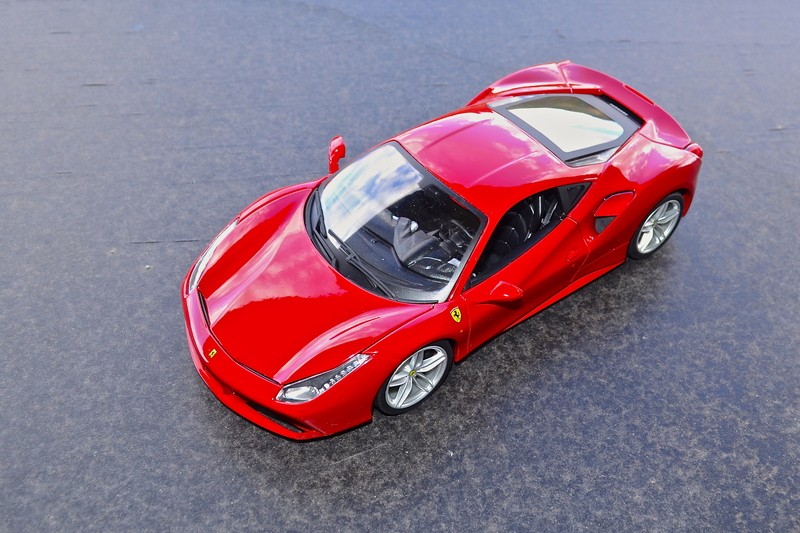 Once removed from the box, the first thing I noticed were the wheels and tires. They are attached somewhat flimsy. The model is just like typical Maistos with “active suspension” with soft springs. This creates one positive and one negative side effects. The negative is that you can twist the wheels in all directions. I assume it is created to suit the primary purpose of the model – to handle being played with by kids. But the result is that depending on how you put the model down it can create a negative camber or mess up the caster of the wheel. The positive is that lowering the model becomes really fast and easy. I have not taken it apart yet, but I assume that it would also make it easy to correct the camber/caster issues. Give me a week and I would let you know. :twisted:

This brings us to the perceived issue with the offset of the wheels. They may not meet the offset preference of some, but the offset is correct to the real car in stock form. 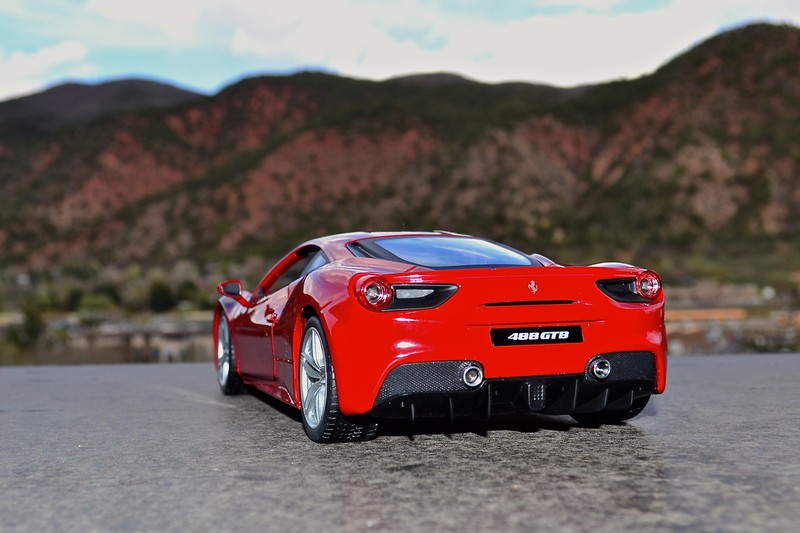 The proportions are dead on, which gives the model that immediate “this looks good” feel, before you even get it out of the box.  The headlights are on par with any Hot Wheels Elite Ferrari and better than some. 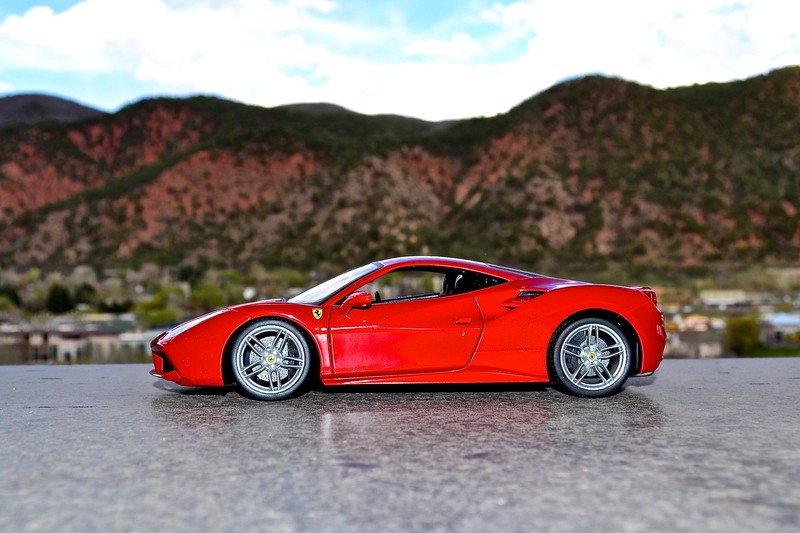 One of the most important parts on any model are the wheels and brakes. As far as moldings, this are spot on and considerably better than many Elite wheels. The brake calipers beat in shape both the LaFerrari and Speciale brakes from Hot Wheels Elite. In this form (Race and Play) however they lack detailing like the Ferrari logos and proper paint. Both of those issues should be eliminated in the Signature series. 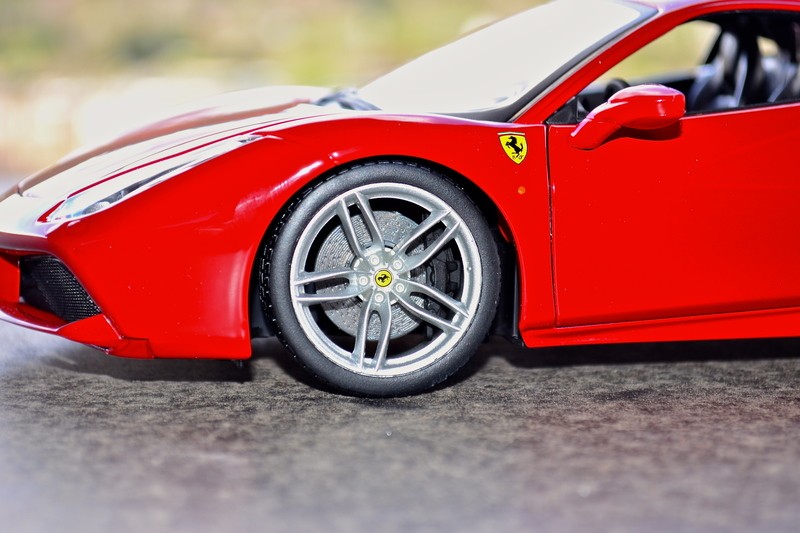 Going to the back of the model it definitely shines. Proportions are yet again dead on, with nice metallic finished exhaust pipes that look very convincing. I did not have time to dig up my foundation 430 Scuderia from Hot Wheels, but you would have to trust me when I tell you that it blows it away. And it is still cheaper than the Scud was ten years ago. 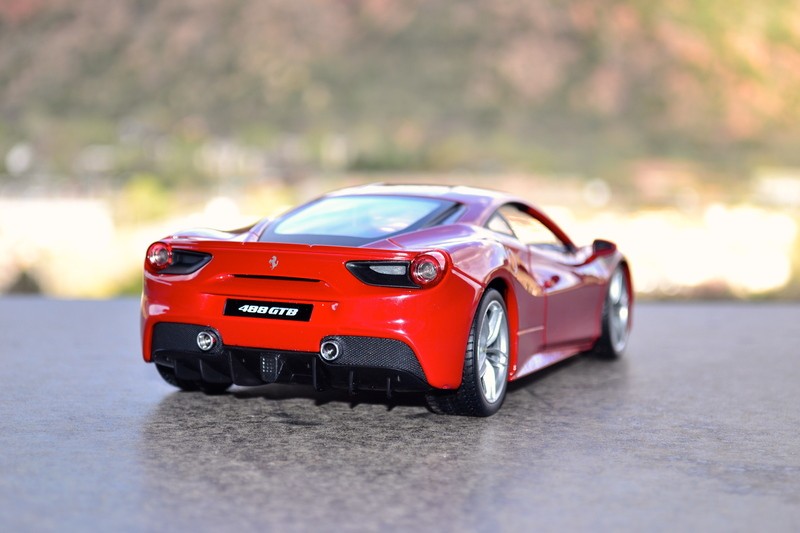 No photo-etched emblems and grilles, but pretty well done emblems and they are definitely better centered and applied than on a lot of way more expensive models. 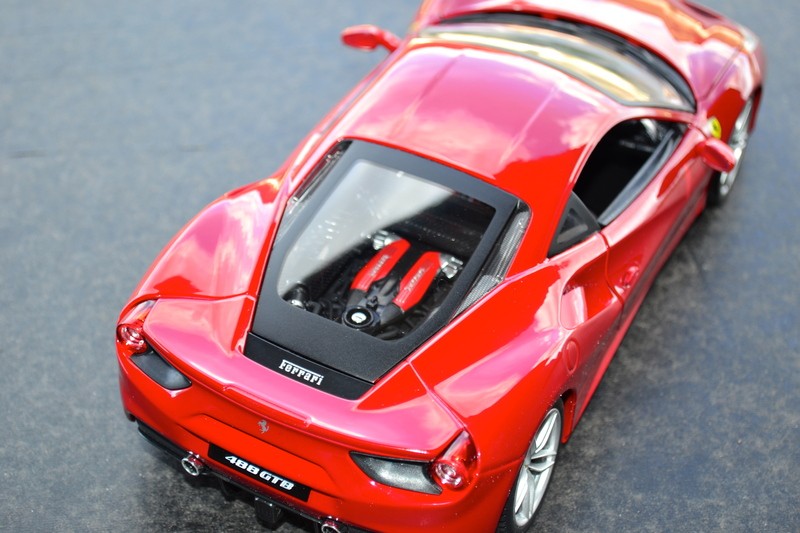 The interior is basically exactly what could be expected from a model in this class. It is all black and not painted, but just molded in black plastic. What is more important, it seems to be very well molded and accurate. It even comes with separate seat belts, all though they are vinyl – ironically, a strategy used on some MR models for over 5 large bills.

The doors do not have windows, which does not bother me the slightest bit. What bugs me are the hinges. They are not doglegs and do not look bad, but restrict how much you can open the doors. This is not as bad as on the Maisto’s Gallardo for example, but not as good as on the ancient Bburago F40 either. 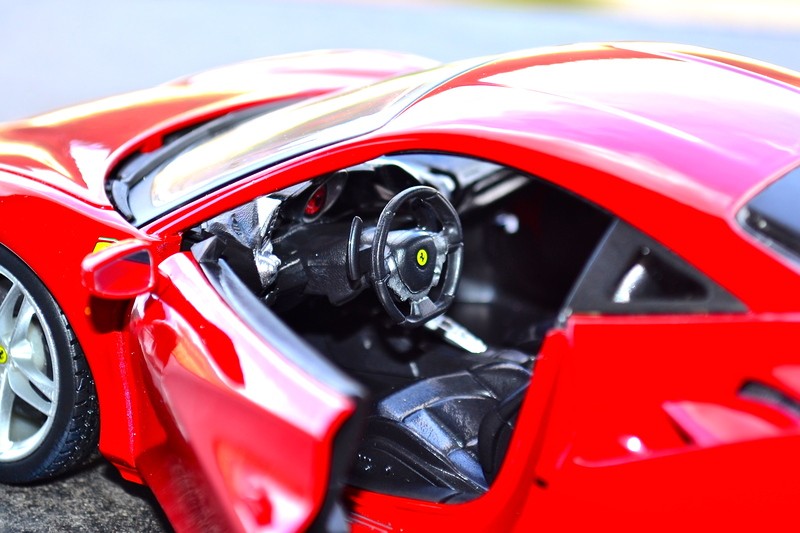 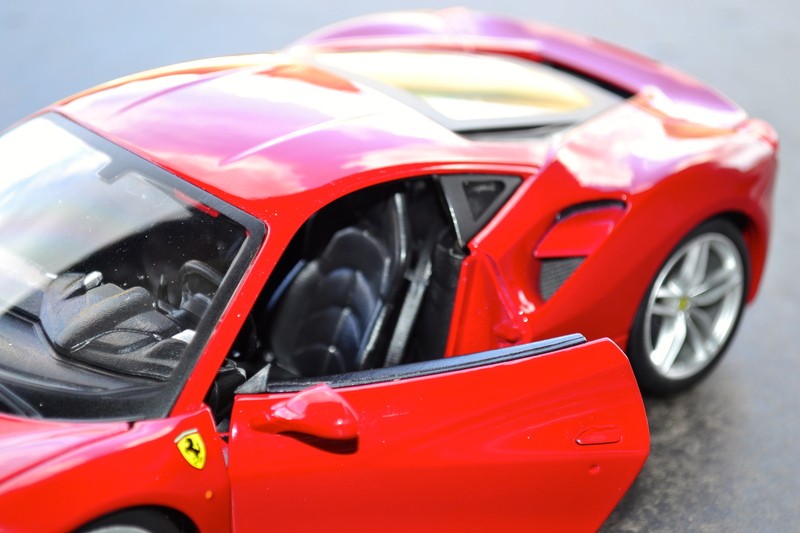 Where this model absolutely shines, even at this race and play level, is the engine. I have held the BBR version in my hands, but seen the MR one only in pictures. This little $37 model makes the engine compartments of both the BBR and MR models laughable. The engine lid also fits so tight, that I had hard time opening it. Almost zero panel gaps. 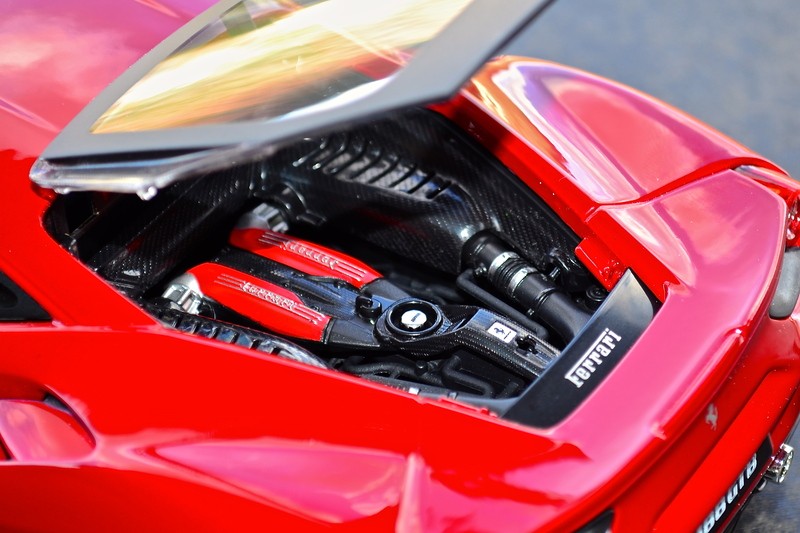 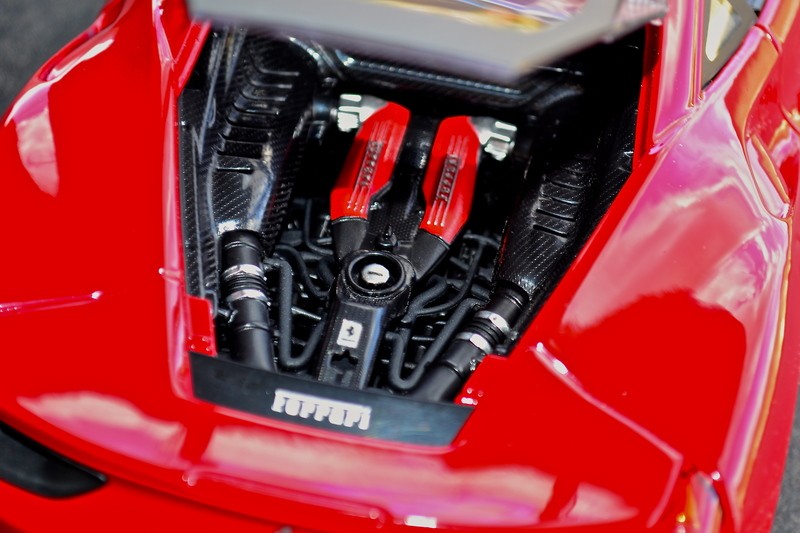 Speaking of opening panels, the biggest fail on this model is the way the front hood opens. I can kind of understand the reasoning behind the position of the dogleg hinges, resulting in the ridiculous way the hood opens, but it is still hideous looking when open. Personally I don’t care much as you can’t see it if kept closed without creating the issues the Hot Wheels Italia has due to the “better” location of the hinges. And let’s face it – the $500 resins don’t open at all. 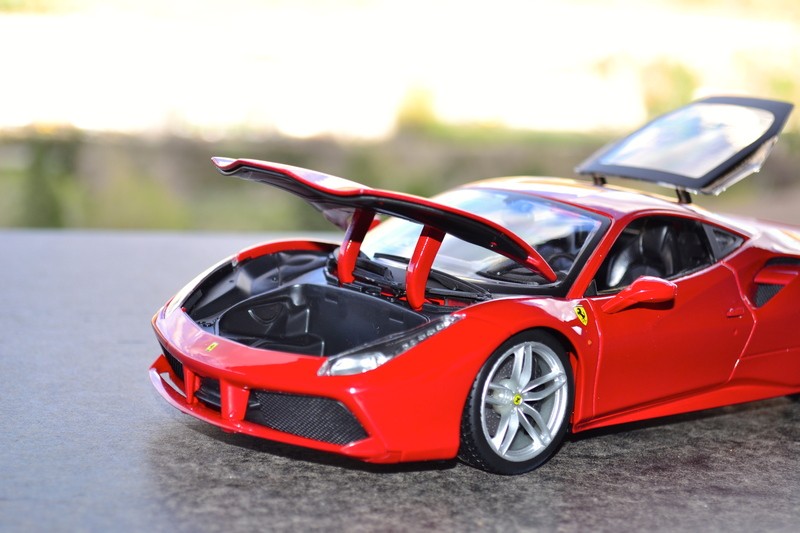 This little solution for attaching the separate chin spoiler (plastic) may be just fine for most, as it is not seen when the model is displayed, but irks me greatly as a modifier. 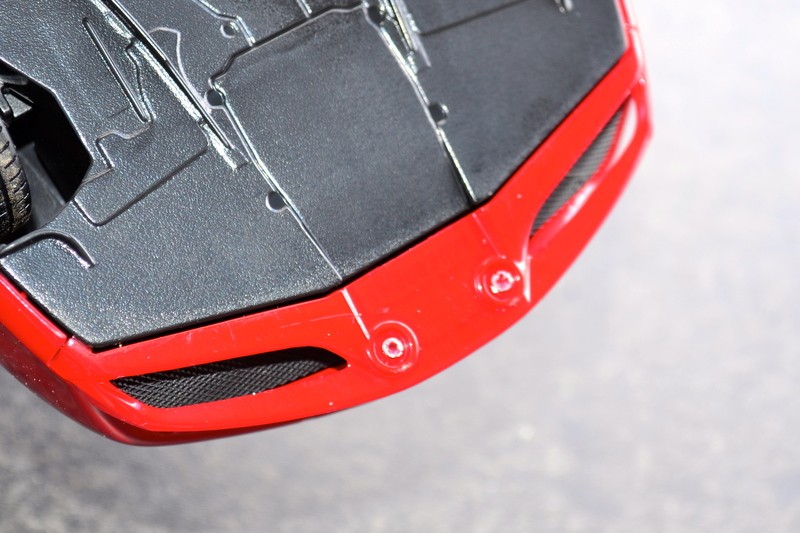 It is amazing how well the model displays next to an Elite for example. 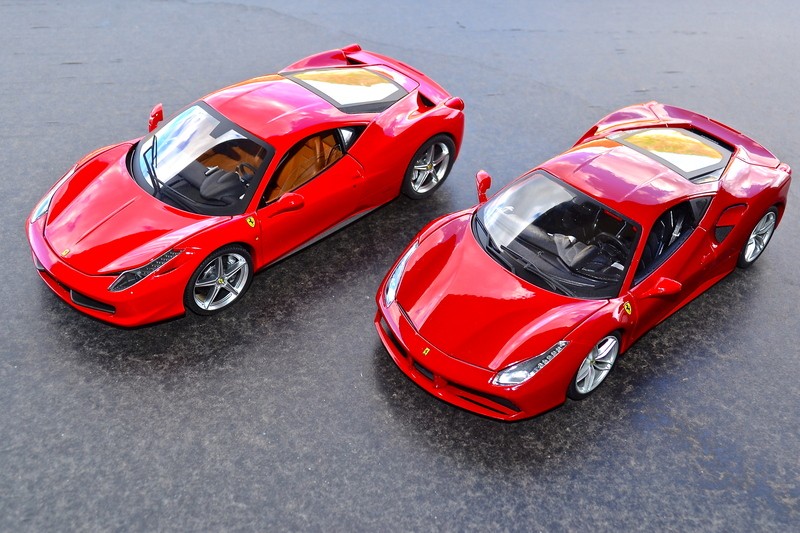 Going back to the offset issue, when compared to the Elite Italia, it looks way better than the overly pushed out wheels on the Elite. 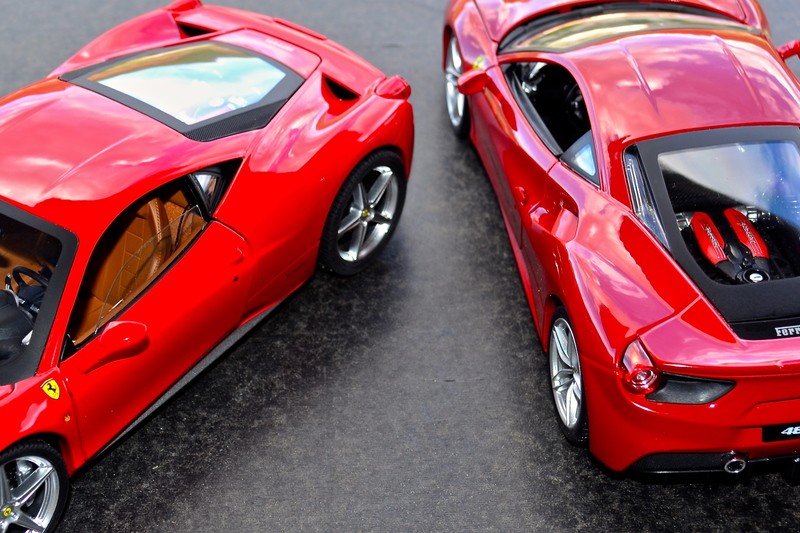 When put in a display case with other models, two things jump at you. It is a little darker red than the usual Rosso Corsa that most Ferrari models are mode in (or close to). The other thing is that all though not quite as refined and not as detailed as the Elites around it, it looks more “authentic”. It is hard to explain. A lot like the Kyosho and CMC 250 GTO’s – The CMC one is more detailed, but the Kyosho looks more “right”. Same way this 488 looks a lot more “correct” and natural than the 430 and 458 Elites. 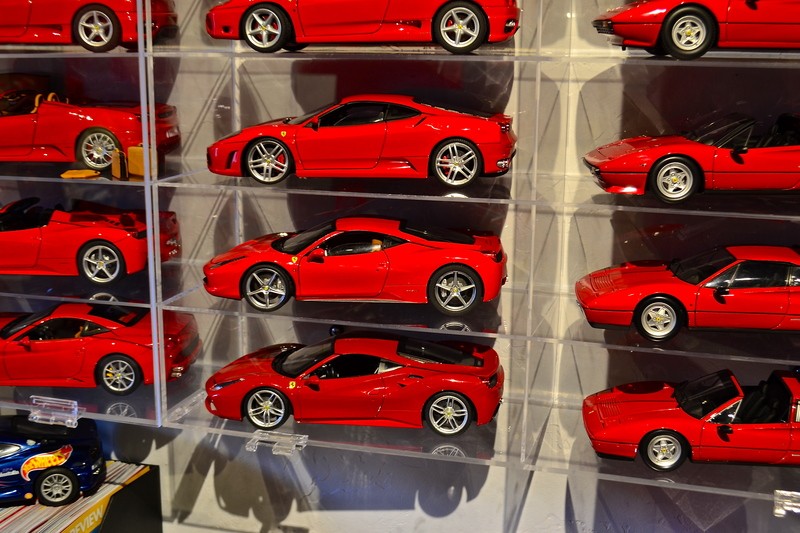 Overall this is a great model without even going into the cost. But once the low price is taken into consideration, it is an absolute hit. I can expect the Signature to be not much different other than better finished interior and some photo-etched emblems, but it would naturally make it the better choice.

On a side note, this model is a great base for mods. With the right touches the interior will come to life and the overall appearance will rival any resin model. Too bad there is pretty much nothing that could be done about the front hood, but I would just keep it closed. After all, there is nothing to be seen in there anyway.  As a conclusion, if everything is taken into account – price, availability, execution, fit, finish etc., the model is 10 out of ten and I can recommend it to anyone.