In this second part we’ll take a look at differences of the details on the two models.

Let’s start from the front with the headlights.  On the Bburago they are two pieces consisting of a pretty well made buckets, that are detail painted and then covered by clear lenses. Simple but accurate. 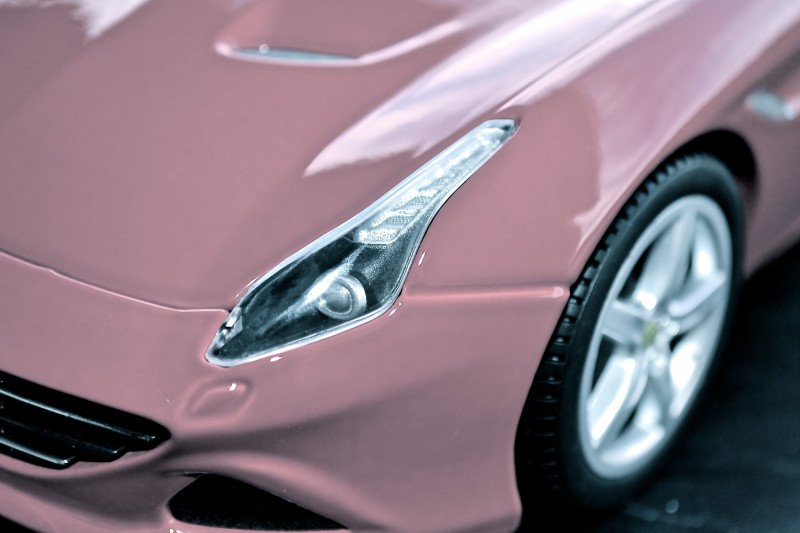 On the Hot Wheels they consist of the same two parts, but the buckets are a generic shape that is inaccurate to the point that the “projectors” are not even round. 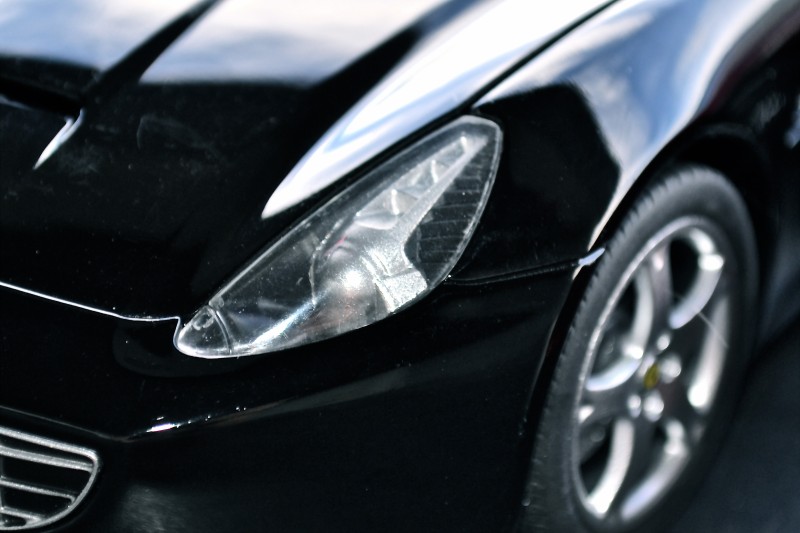 The front grille on the Hot Wheels is not fairing much better. It is a very shallow molding with the grille bars poorly printed in silver and the Cavallino molded together. 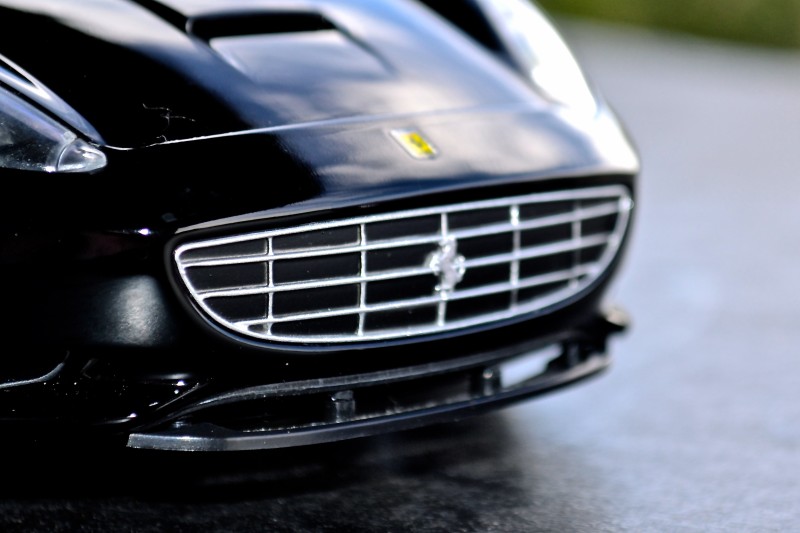 On the Bburago the grille is also molded, but a lot better with much greater depth and nicely chromed grille bars and a separate chrome Cavalliono. 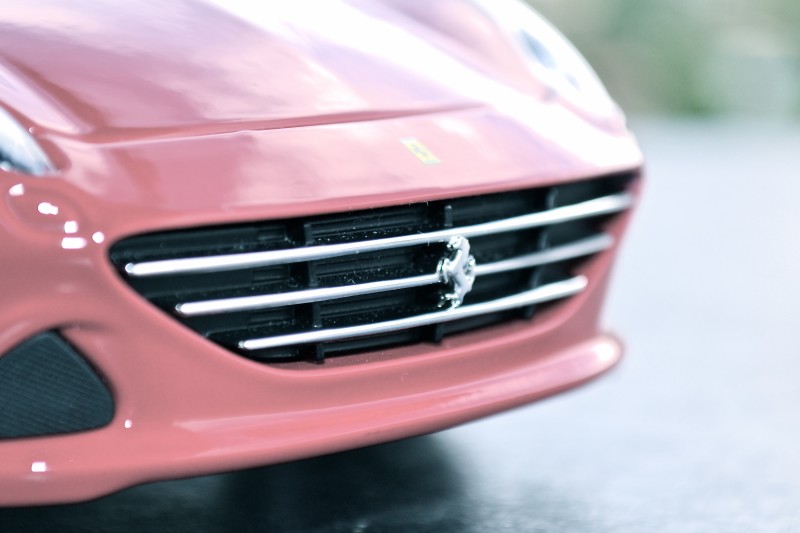 The emblems on both models are different too. The Hot Wheels uses thick vinyl stickers that look awful. 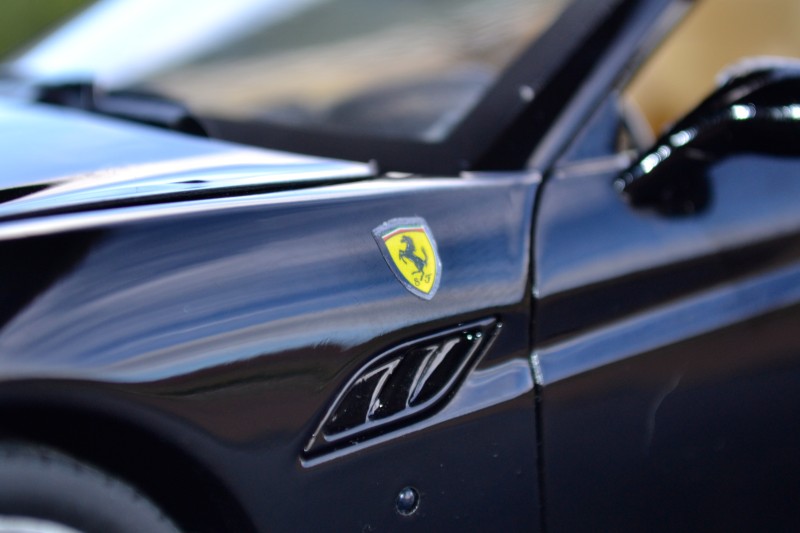 while Bburago are using tampoo-printed logos which look a lot better. 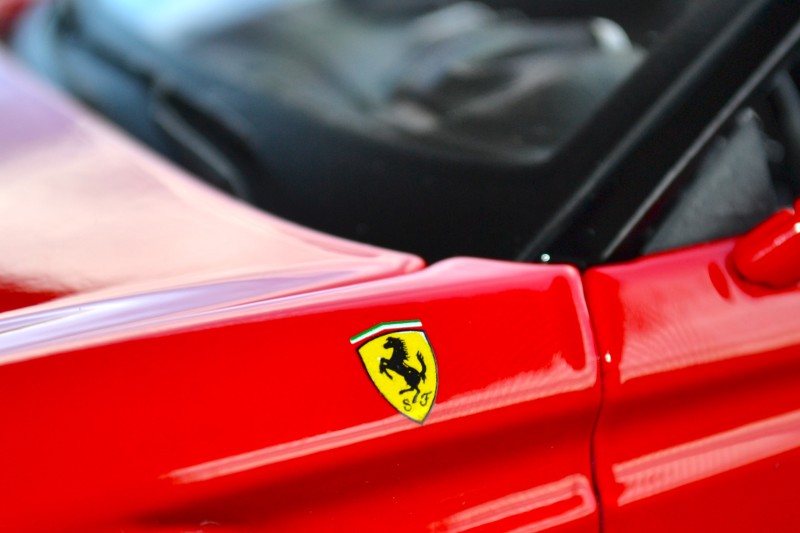 The story is not much different with the wheels and brakes.  Both models have pretty much the same discs detail wise. On the Foundation model the brake calipers are just a curved smooth piece of plastic with no detail whatsoever and no markings. 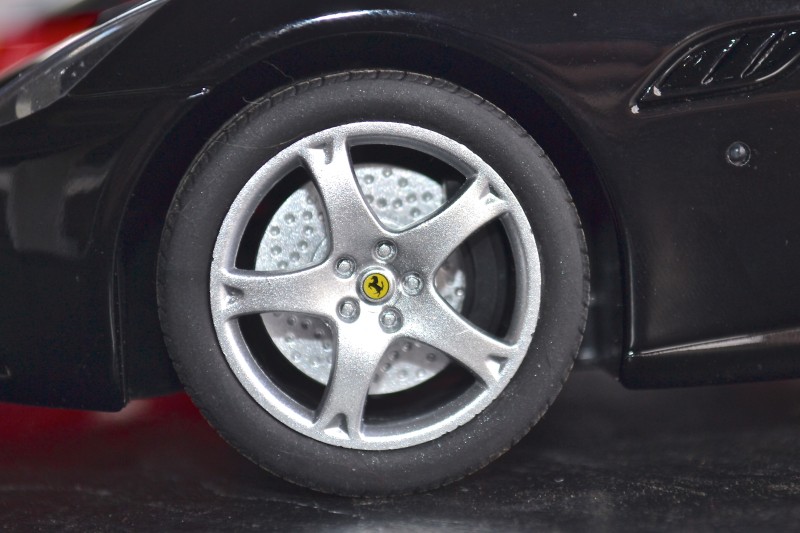 The Bburago model has brake calipers that actually are molded to look like a brake caliper and have silver Ferrari markings on them. The center caps on the wheels are scaled a little better and also there are air valves on the wheels, which are absent on the Foundation model. 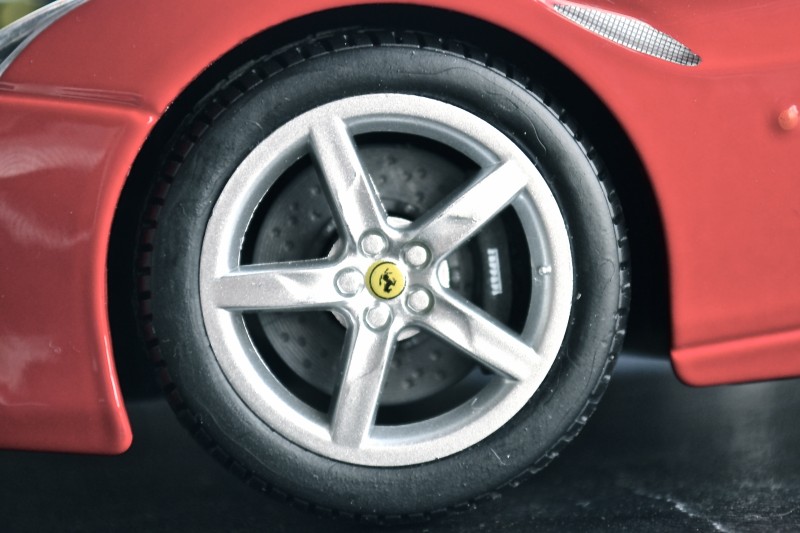 Looking under the hood, I would say both models are made equally well. 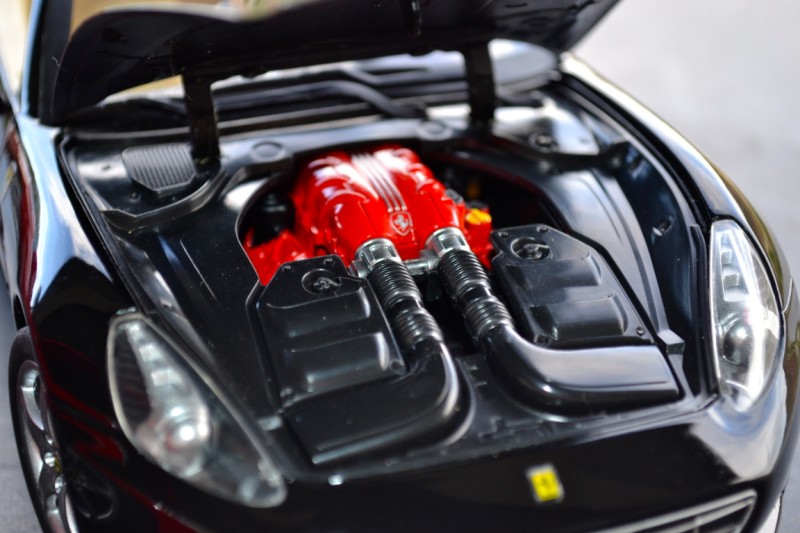 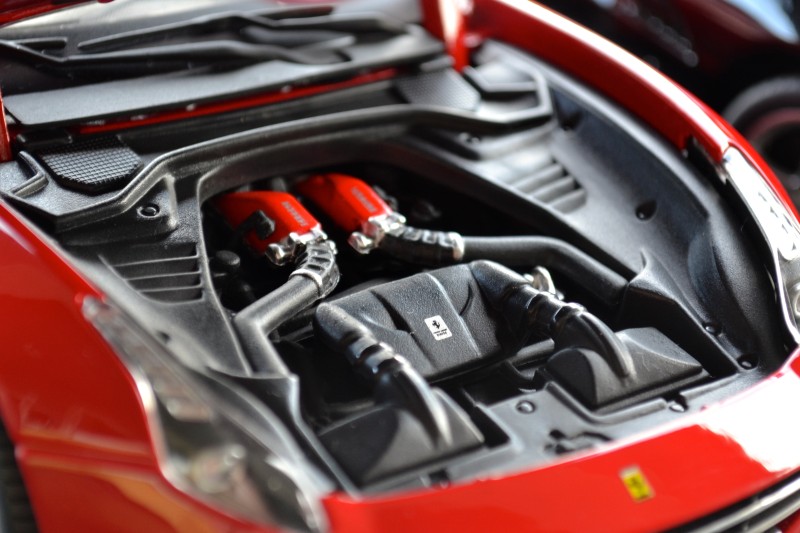 Next, let’s check out the interiors. Here materials are very important. One thing that I never liked in Hot Wheels models (Elites too) was the material they made a lot of their interior pieces, especially the seats. They are from some rubbery material, that supposedly allowed for better detail. The issue is that this material warps. Combine this with gluing the pieces and you end up misaligned parts and twisted seats, that you can not fix. 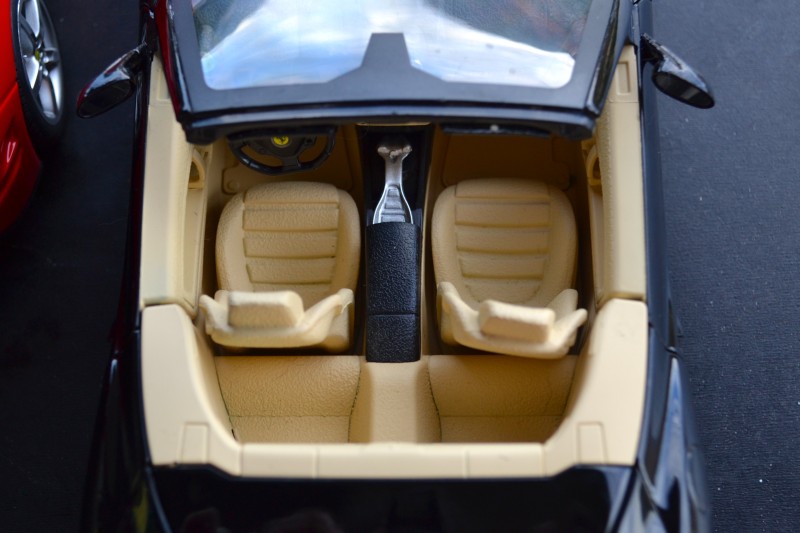 On the Bburago model everything is hard plastic. So it does not warp and because everything snaps in place, the pieces can not be misaligned. Another huge advantage of the hard plastic in my book is, that it can be painted. While the rubbery material on Hot Wheels is a nightmare, as no paint will dry on its surface. 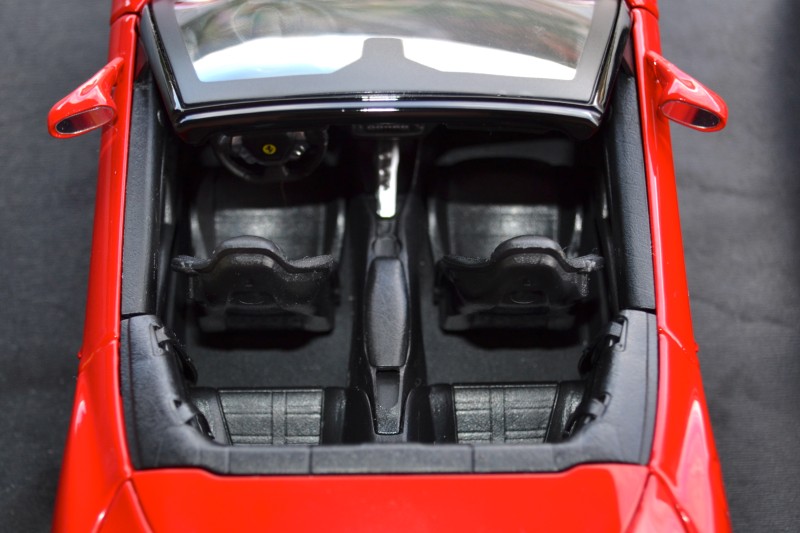 The dash has similar issues on the Hot Wheels model as the rest of the model. Poor color separation, no markings and the steering wheel is made from a smooth plain plastic, that looks very… well… plastic. 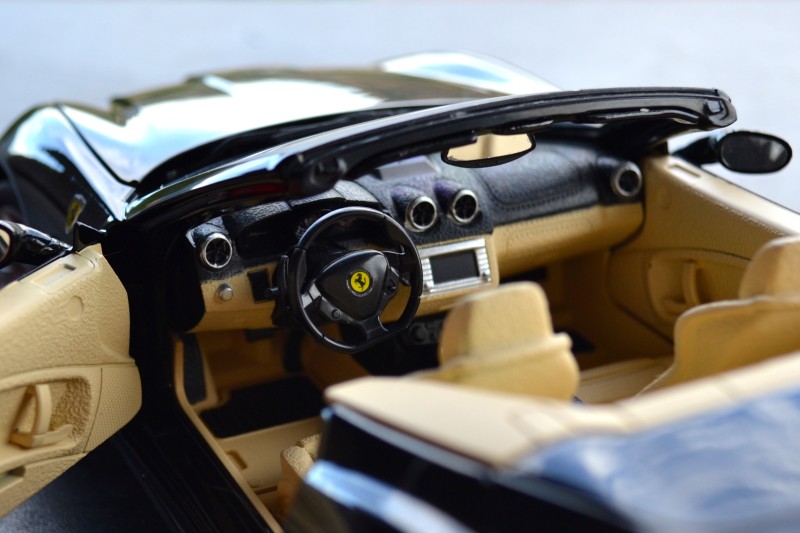 Same as the wheels, Bburago has the upper hand here. The emblem on the steering wheel is better scaled, but most importantly the wheel is textured like the rest of the interior, has some additional color detailing and it is from hard plastic, which will hold paint if you wish to change the interior color. There are also markings on the instruments on the dash and the screen, which make the interior look more realistic. 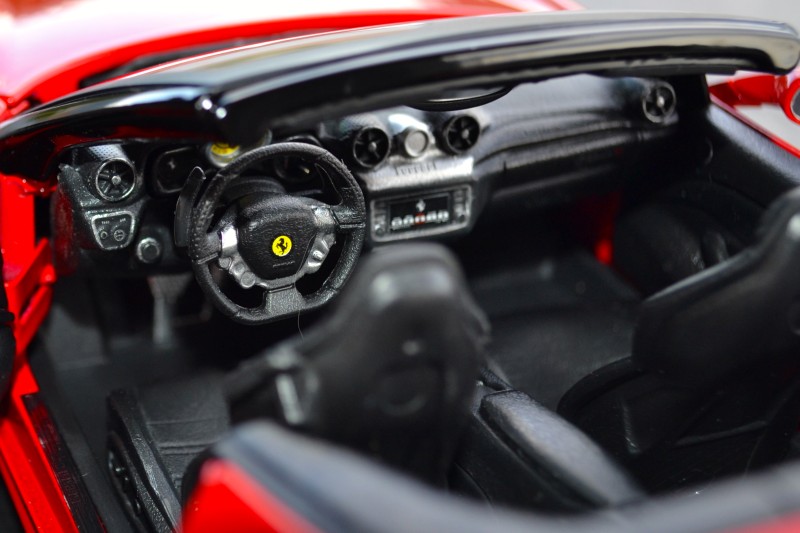 The biggest issue I have with the Hot Wheel’s interior is the texturing. The model has perfectly smooth surfaces on some portions of the interior combined with overly grained other sections.  This is an issue with all Mattel Californias and surprisingly, it is worst on the SE.  You can see the top of the door panel being smooth in contrast to the rest. There is no detail, molded or painted in the upper speaker and everything is just one color. 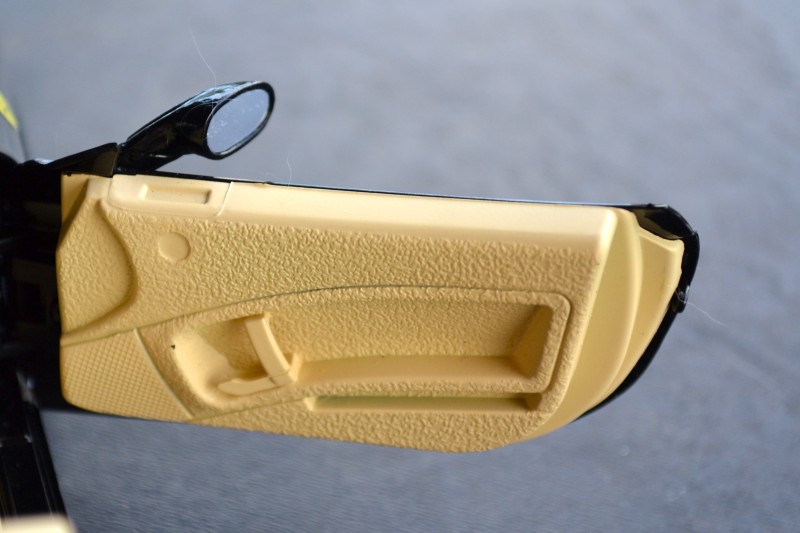 On the Bburago the “leather” has much finer and better grain and it is uniform throughout the entire interior. The upper speaker is properly molded and it has a silver ring around it. 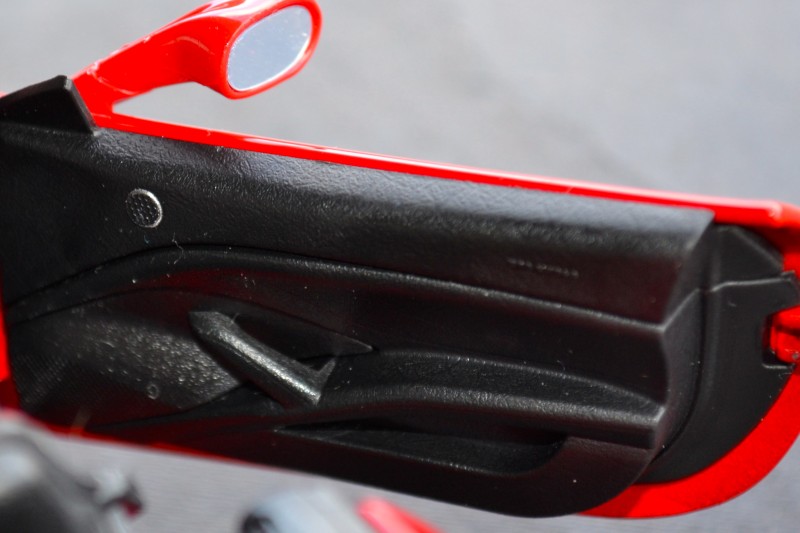 This is another picture showing the variable textures on the Foundation model and also the lack of seat-belts or any color detail. 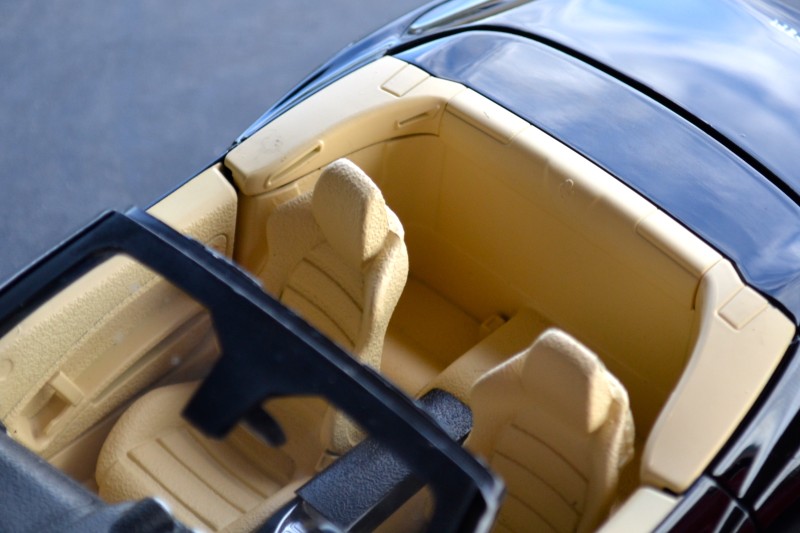 The Bbruago model has again uniform texturing that is better scaled and seat-belts for all four passengers. 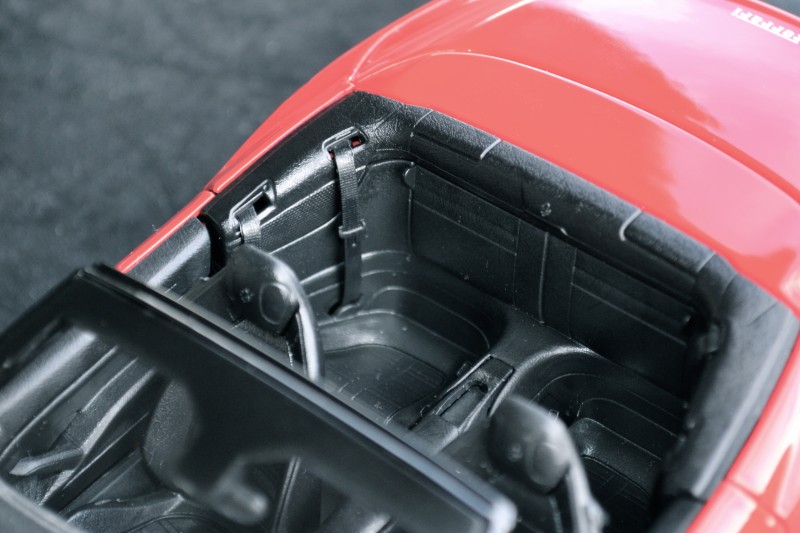 I personally like the taillights on the Hot Wheels car better. They are different design from the newer California, because they are not housing the reverse lights. 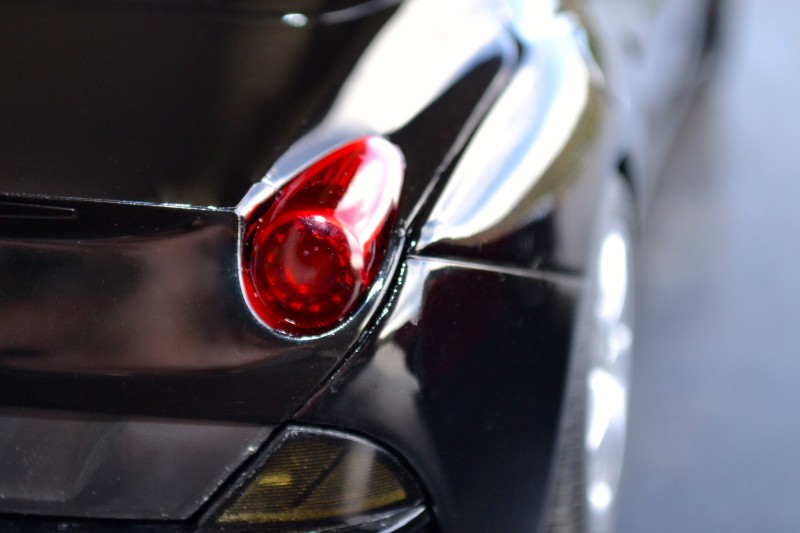 My biggest issue with the Bburago taillights is actually what is under them, as you can see a sort of a “step” underneath them when viewed from above. 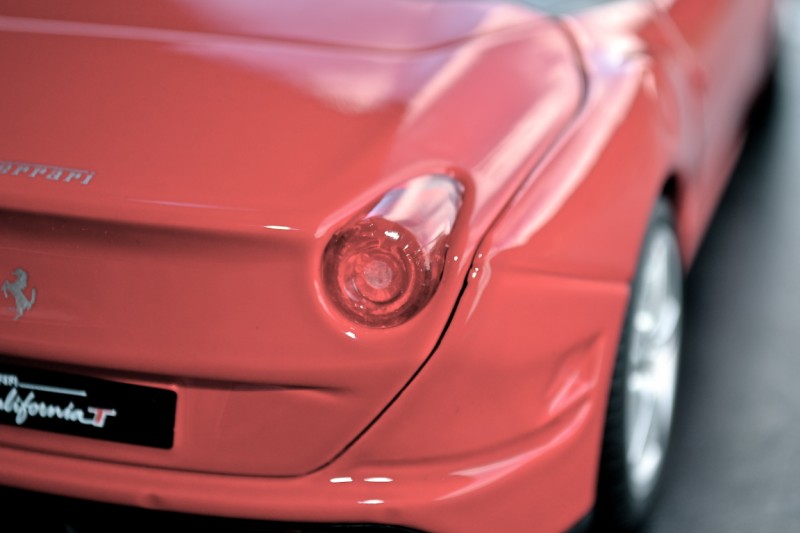 The trunk is a different story. First there is the big hole in the middle of it, which is something I hate about all Mattel models that have it. it is made for wire to pass through, which hold the trunk shut during shipping. It is the dumbest thing ever. The trunk on the Hot Wheels is just empty space.

Bburago went definitely a step further, as they included the folded roof in the trunk, which was a very nice touch. 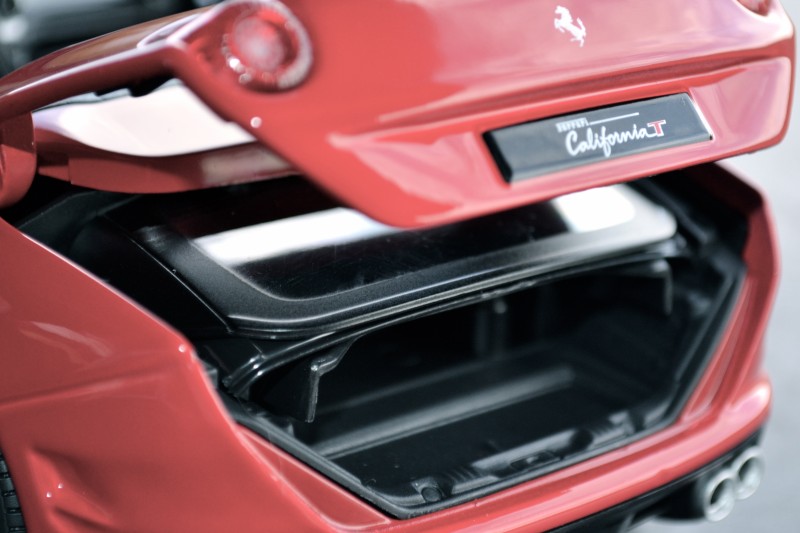 I think it is not hard to see why I think the Bburago is a much better model. not to mention that it has “working suspension”, which would make lowering the ride height a breeze.