The Holden Sandman is a uniquely Australian motoring marvel. Based mostly on Holden’s contemporary full-size sedan line-ups produced in the 70s, this part muscle car part panel van was a dual-purpose vehicle serving your work duties during the week and ‘recreation’ during the weekends. It was known as the Shaggin’ Wagon or Sin Bin for obvious reasons when Holden became creative and sold mattresses as options for the back. No wonder it was known as a father’s worst nightmare back in those days…

The original HQ Sandman was released in 1974 to appeal to the younger demographics who were embracing the sun and surf cultures. What we have here is the 4th Sandman iteration after the aforesaid HQ and the subsequent HJ and HX. 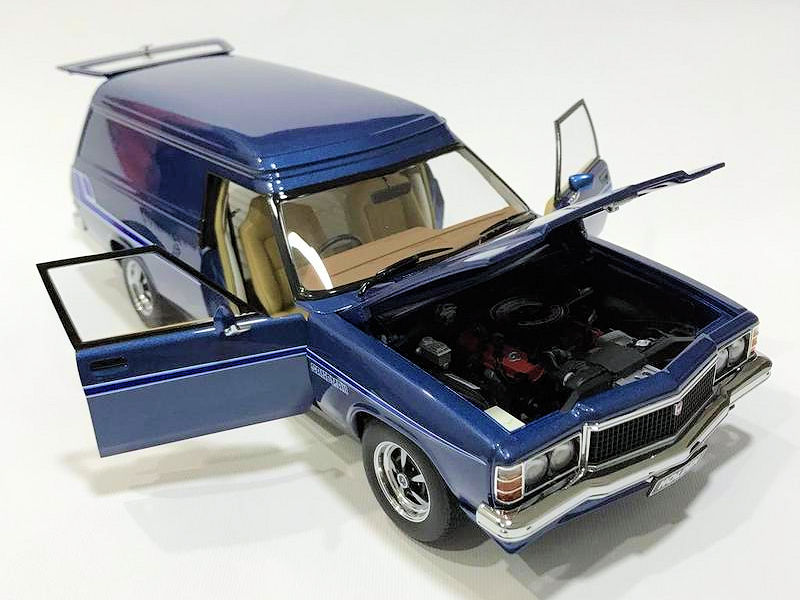 The front fascia of the HZ Sandman was based on the Holden Kingswood full-size sedan.

Production numbers for the Sandmans are unknown as these were produced at various Holden plants while some were designated as commercial vehicles. Needless to say, Holden was not paying attention to their records management in those days.

The Sandman’s were released in various bold and striking colours. One of the distinctive features is the iconic ‘SANDMAN’ script on the tailgate.

I pre-ordered this HZ Sandman in Windsor Blue a few months ago via my regular hobby dealer from Australia. The suggested price was AUD 250 but I bought mine at a slight discount. With both decent exchange rates and very favourable shipping costs from down under, not to mention I find these utes very cool, it was not difficult to explore this niche. 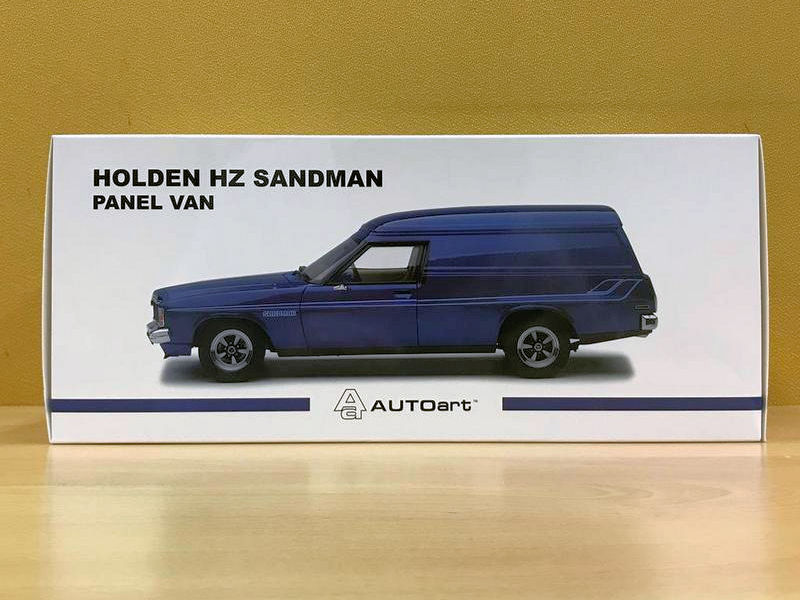 The artwork is simple yet tastefully done. For someone who usually disposes of packaging, this is a keeper.

As some Biantes are made by AUTOart, it was no surprise to find the packaging to heavily reminisce the now-defunct Millennium series. Personally, I like packaging with artwork and this is so much better than the current boring and Plain Jane blue boxes that are the current AUTOart affair. 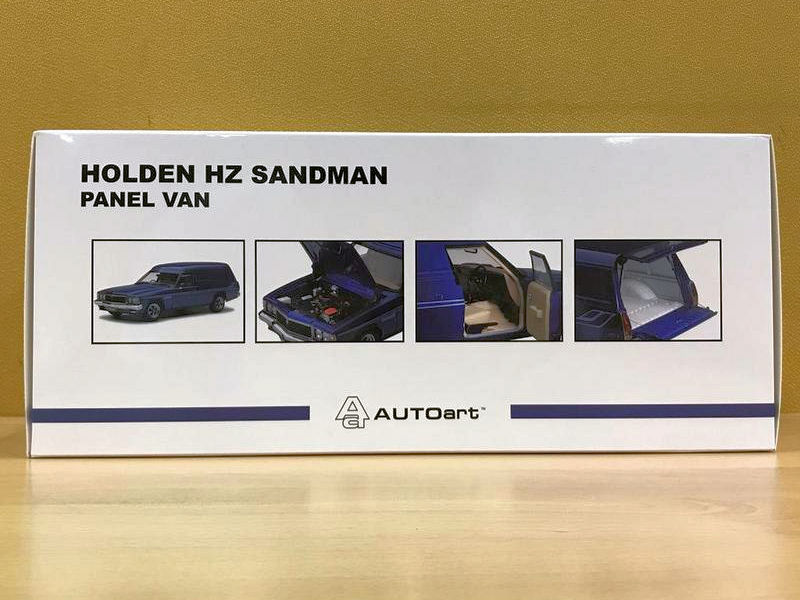 AUTOart branding is all over the packaging. The only Biante logo is at the bottom side.

Besides AUTOart, Biante is also the distributor for other brands such as Kyosho, OttOmobile, GT Spirit and even Sun Star in Australia. 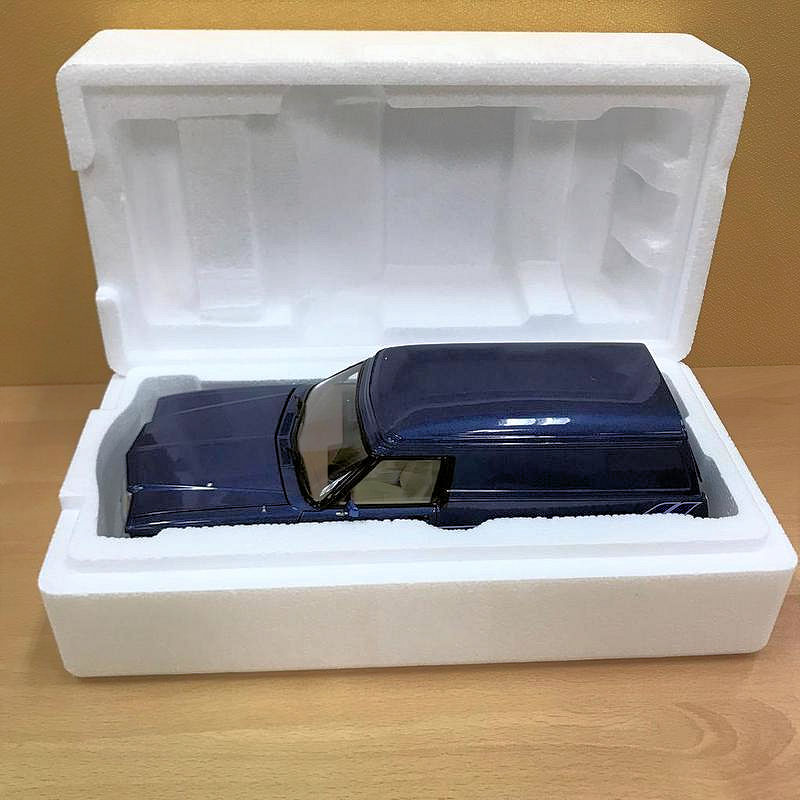 The model is housed within a 2-piece Styrofoam shell secured by 3 screws at the base. Unlike my previous Biante, you do not get the door openers.

For any collector, the most magical moment is when you remove the external tapping and open the upper shell to reveal your latest model. Even though the picture shows otherwise, the colour is actually a darker shade of indigo or blue. Under certain lighting conditions, my awful camera seems to illustrate the Sandman being purple. Regardless, it is a spectacular colour choice. 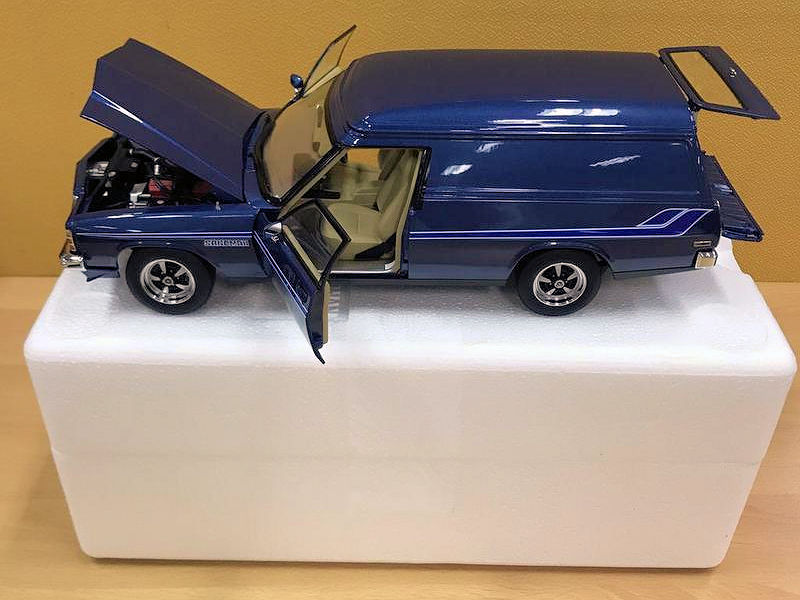 With the model out and about, I could already feel the pride of having this in my collection. To add icing to the cake, even my missus could not help but got a little intrigued at this strange-looking machine. Whenever she precedes “Another model again?” with “That is a nice looking model.”, I know I have gotten a worthy addition.

The HZ Sandman was based heavily on the Kingswood of the same era. Generally, like how the Chevy El Camino was almost exactly like the Chevelle but with a different body style aft of the B-pillar. Personally, I think this is one of the most good-looking vehicles of the era. Granted, I do have a soft spot for dual round headlights of the 60s and 70s. Chrome work on the front bumper, headlight surrounds and grille is exemplary with no smudges or fingerprints visible. On the downside, the grille is not perforated.

Some might argue that the Holden license plate may have ruined the lines at the front fascia. I beg to differ as it adds a unique presence plus the vintage HOLDEN script is more than welcome. 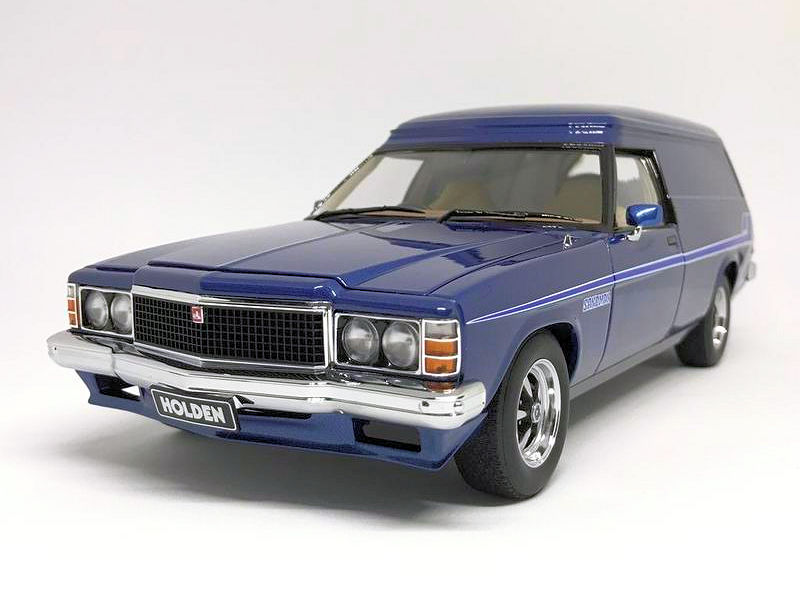 One of the HZ Sandman’s defining features is the signature side graphics on both sides. Of course, the SANDMAN script on the lower tailgate is unmissable. All around, the paintwork is good and rich plus the decal application is flawless in my #420. Alignment of the side graphics though will be addressed later.

Construction of the front hood is excellent with movement via a pair of sturdy sprung hinges. 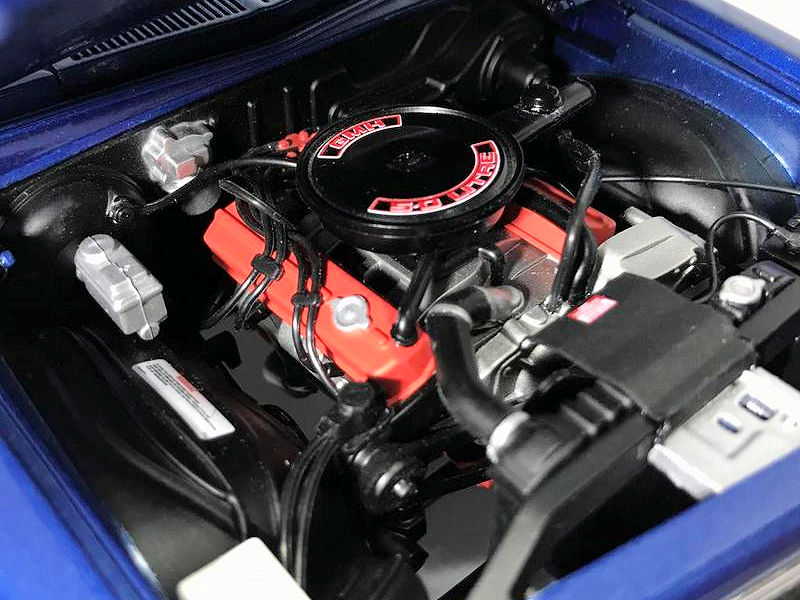 With the hood lifted, you stare at probably the weakest link of this model. This model deserves a better powerplant presentation, especially one costing more than AUD 200. In this regard, I think Classic Carlectables would have made a better job at replicating the engine bay, which is not too difficult seeing there are not many accessories to cover. There are only 2 bright spots here, the air filter cover and some decals evident here and there. The worst part is perhaps the clearly visible mould lines on some accessories.

Shutting away the disappointment, you may notice the hood does not sit right. Not an issue as you can ‘flush’ the lines by applying some pressure to properly close the fitment. Looking at the HZ Sandman’s front fascia, one is more of gazing than merely looking at the headlight assemblies such is the intricate level of detailing here. Praise must be heaped on AUTOart for doing an excellent job here. 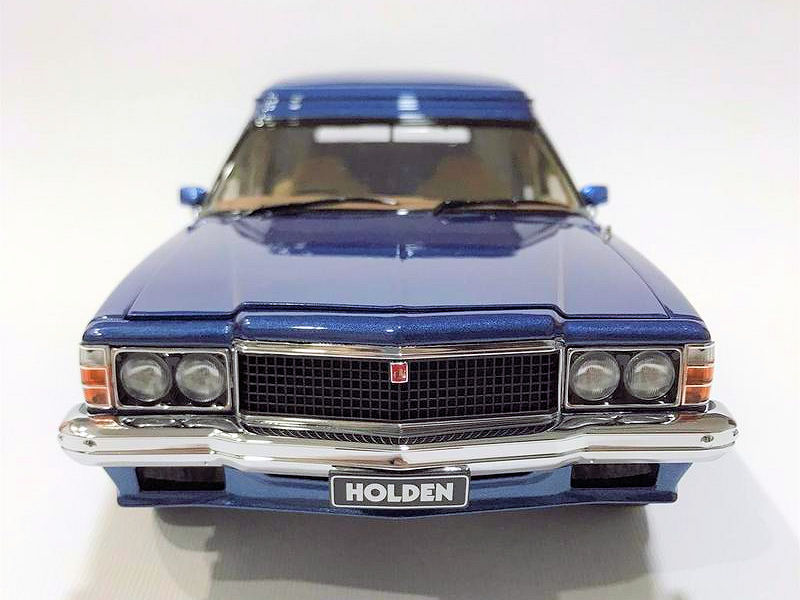 At the back, chrome work is again as good as the front while the bold SANDMAN script just screams at you. This has to be one of the coolest nameplates put on a vehicle ever.

The tailgate is a 2-piece design. The upper piece is supported by a pair of struts and they work perfectly. The lower piece is equipped with some magnets to hold it in place when shut and supported by wires. 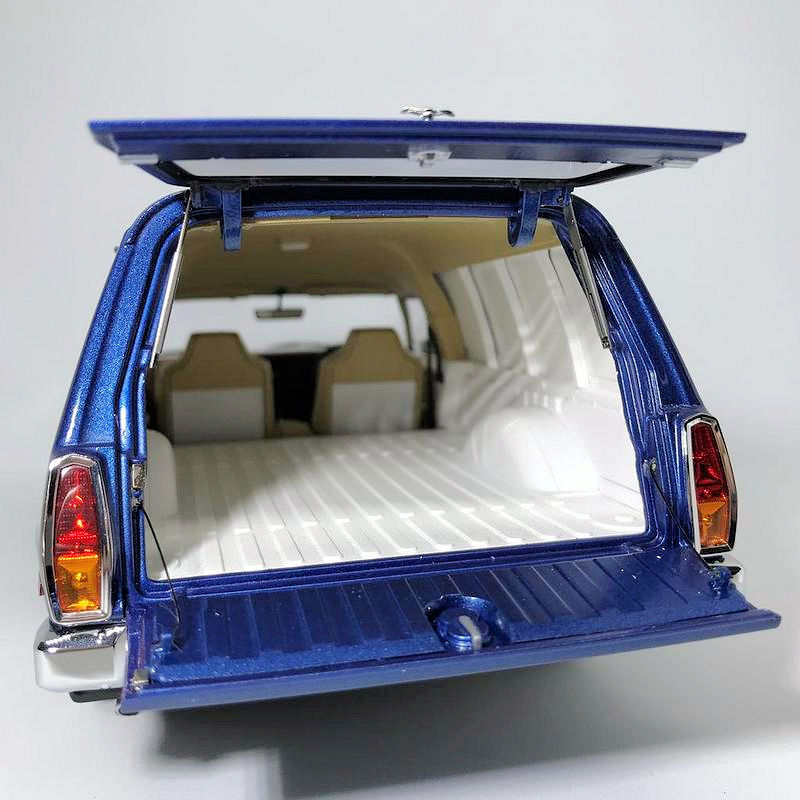 With this much space, you can pretty much put anything and do anything back there. It was remarked that half of the Australian newborns of the 70s were conceived at the back of a Holden Sandman.

Open the driver’s door and you’d be surprised at how far it can swing-out. The interior presents itself in a very pleasant Buckskin trim which is a clear departure from the all-black affair of the first 2 releases in Valencia Orange and Tuxedo Black body colours. 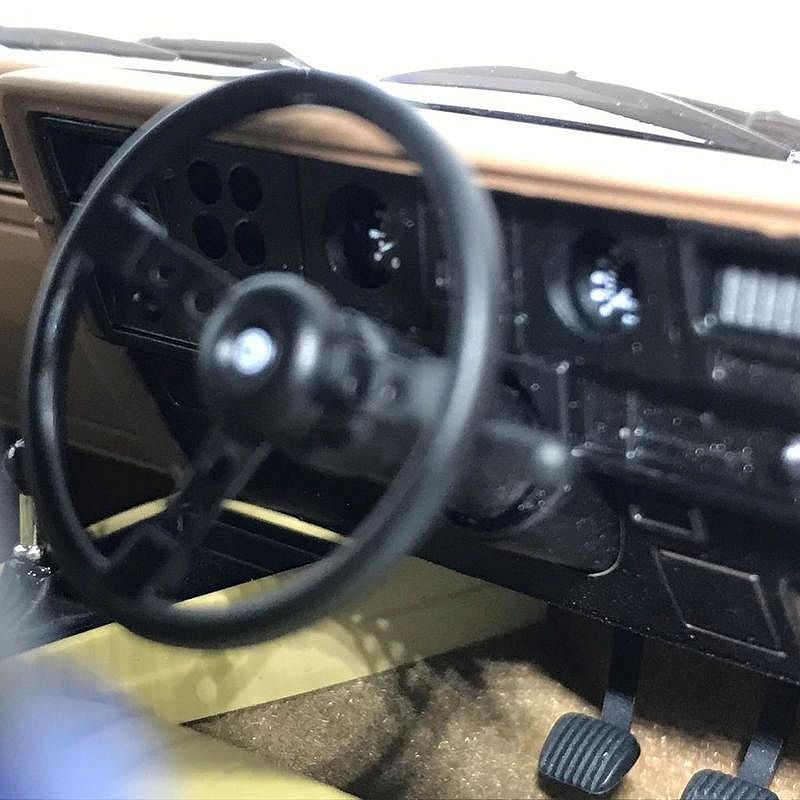 In front of the 3 pedals is a nicely appointed floor mat, albeit a little small and the unusually placed parking brake near the door sill.

Peer a little closer so that you can appreciate the fully instrumented gauge cluster. Despite everything being black, you can still make out what the details are though my phone camera struggled to capture all these in a dignified way.

The driver’s seat appears nicely bolstered and the carpeting is generously applied throughout. The only slight disappointment being it is too hard to the touch as some models in the past have come with ‘squishy’ seats.

Door panelling is basic at best. The inclusion of an individual window crank piece is rather hilarious due to how comical it looks. The door joints work well on both sides.

Being a basic interior, you should expect to find the detailing on the passenger side minimal at best. A surprise is that the sun visors are individual parts pasted on to the headliner instead of being moulded as part of the bigger piece. 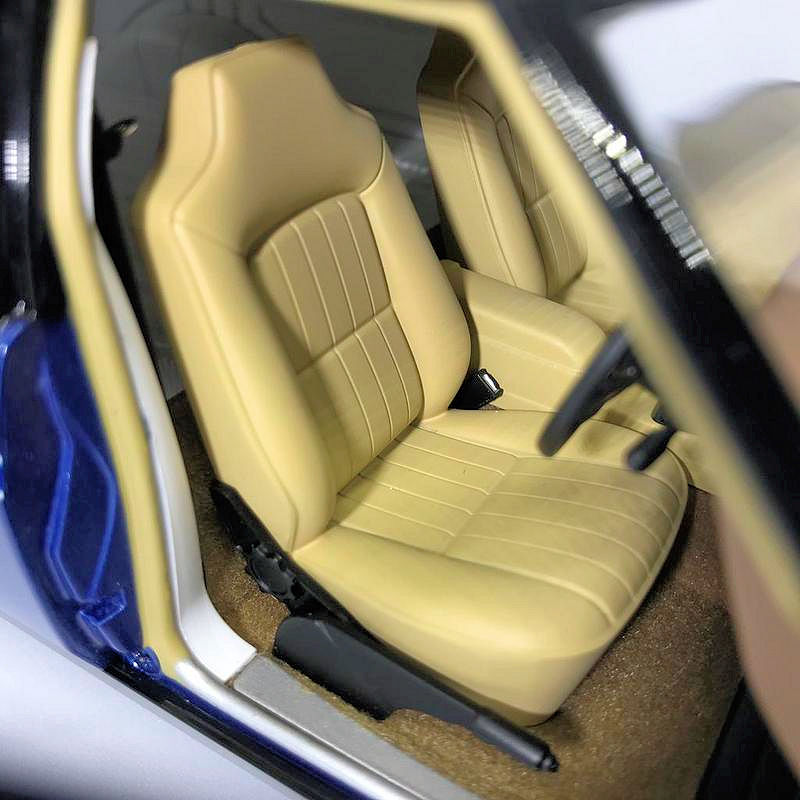 So what is it about panel vans that make them cool? To me, nothing combines both performance and practicality better than these vehicles plus another similar style; the station wagon. Sure, some SUVs claim to offer similar levels of driving execution and usefulness but I think styling-wise, they are slightly less appealing. SUVs are meant to look tough and purposeful so when the design becomes too urban or ‘car-like’, it might skew towards being ungainly. (*Cough*, Bentley Bentayga…) 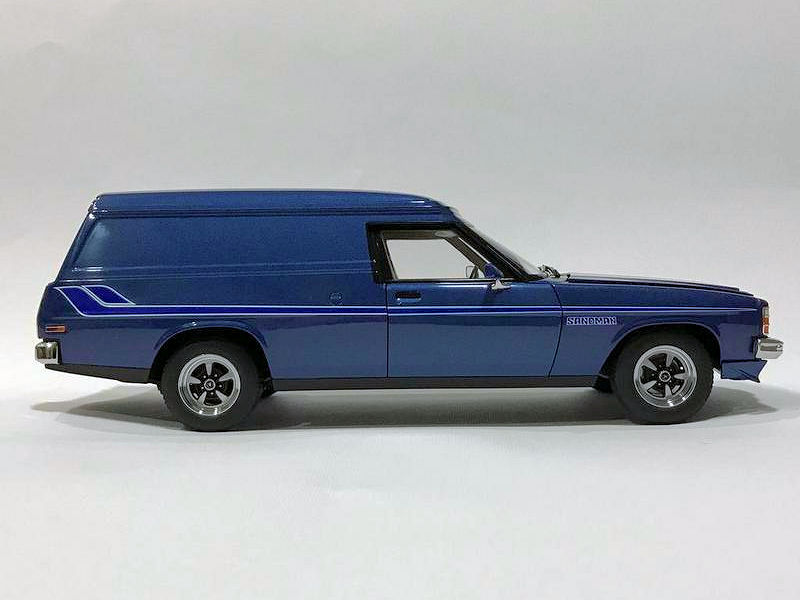 Panel vans and station wagons sit lower to the ground. Especially for the former, with a vast side panel real estate, you really can dial up the appearance scale with some graphics or simple branding.

The HZ Sandman comes standard with these ‘Monaro GTS’ rims which suit the style perfectly.  Front-wheel of the Sandman in closer inspection.  At first glance, the GTS rim appears well-produced until you compare it with the actual piece.  Actual Monaro GTS rim on a Sandman. 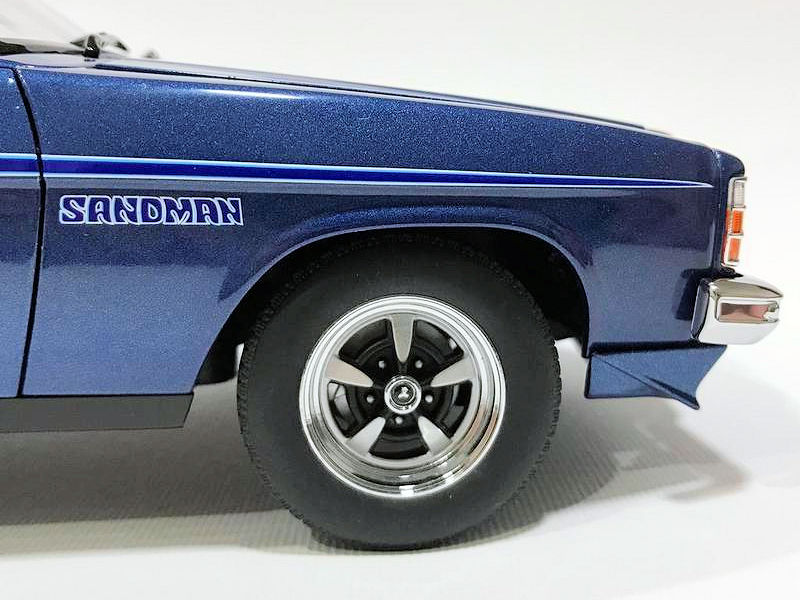 Comparing both, it does look that the inset section should be larger and that the 5 hollow slats should be smaller too. Just a minor issue for me as the Holden emblem in the centre is well made. 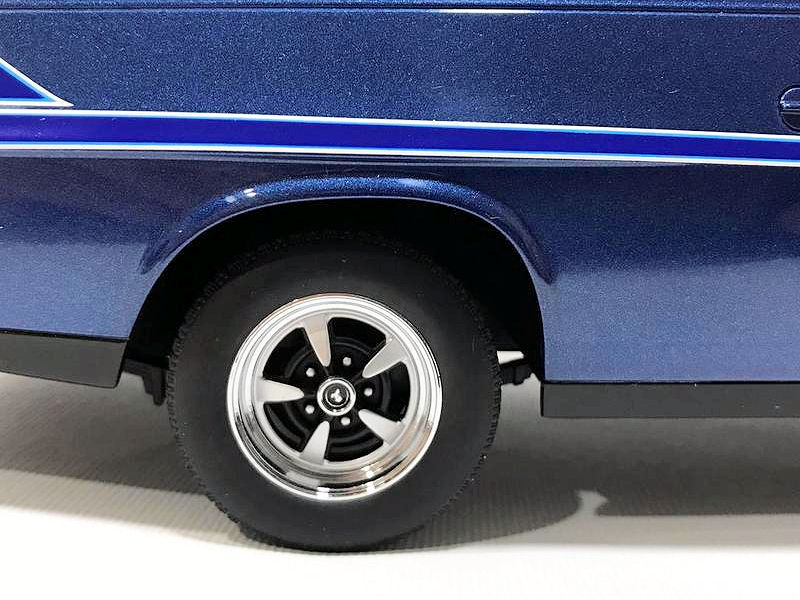 Another look of the matching rim at the rear.

Typically with models that come with side graphics that run from front to rear, I like to assess how good or bad the alignment is. For the HZ Sandman, the dark blue panel graphic with sky blue and white outer lines do look decent except for the area between the end of the driver’s door and the start of the rear panel where the alignment is just a little missed.

On the other side, it is a similar finding where the alignment between the front panel and passenger door is perfect but at the other end less so. I can fully accept this as the production quality of the era may be susceptible at best and it is just an observation on my part, not a source of demerit. 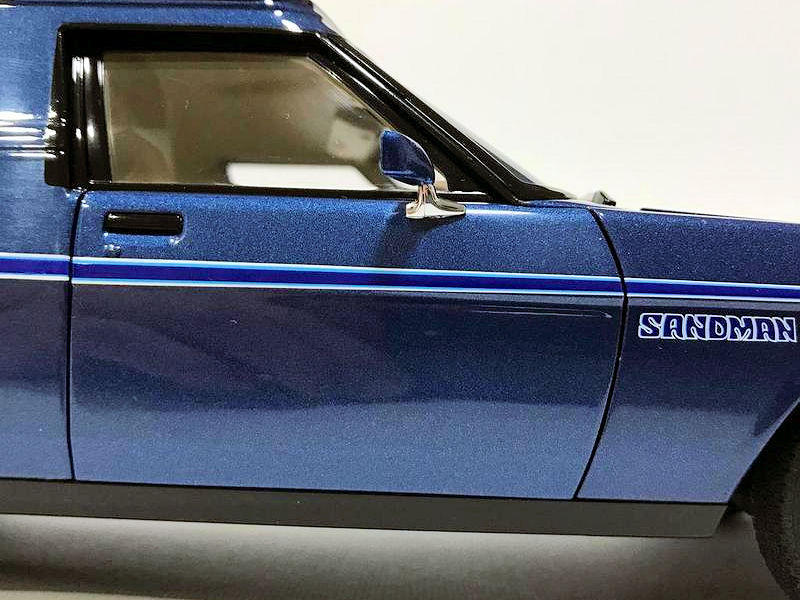 Flipping the model upside down and it is obvious the best parts of the model are over. Nothing worthy of mentioning here but there are colour differentiations on the engine sump and exhaust system which is great. The rear suspension does not function even though the blue detailing gave an initial false impression. At the front though, suspension travel is minimum owing to the very short springs installed.

Now this being the 3rd release of the same model and that the very first Valencia Orange was released way back in December 2010, it would be interesting to see if there has been cost-cutting and simplification done. In order to do this comparison, I would need to get a 2nd HZ and it will not be cheap seeing only 2,500 pieces were made. 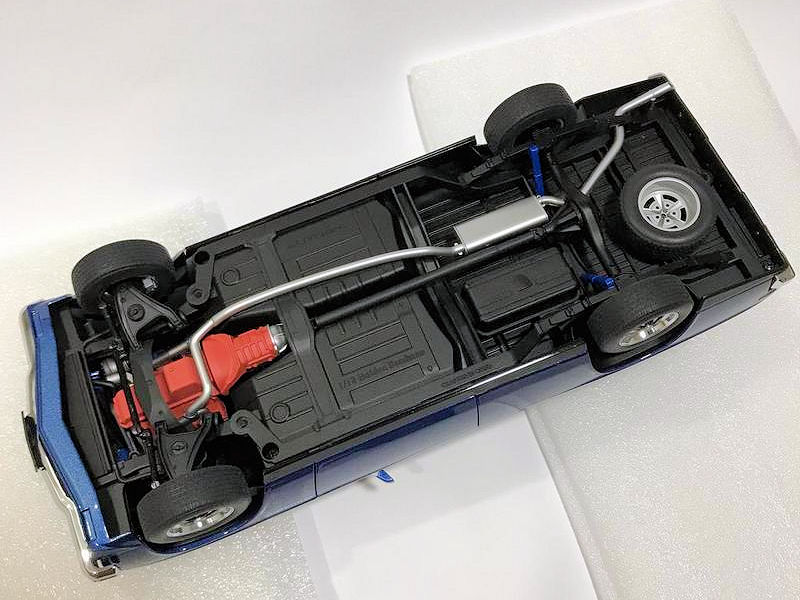 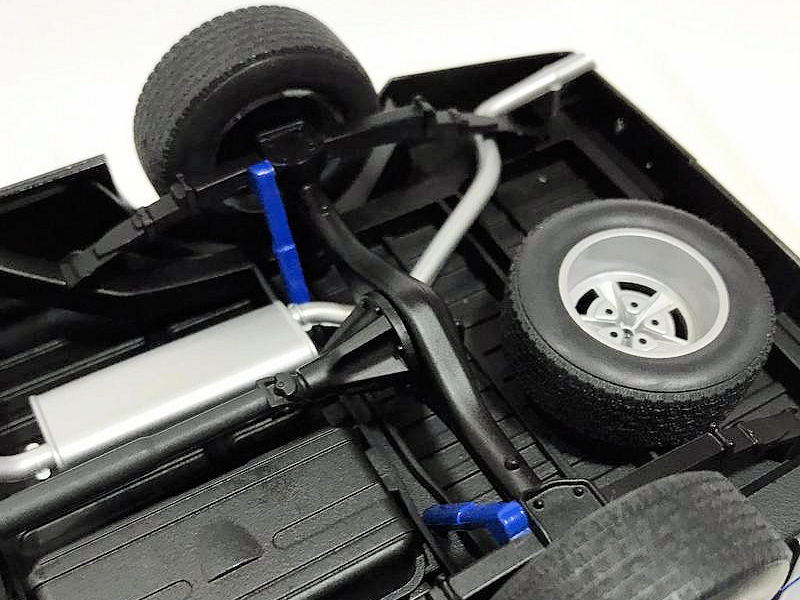 A full spare is provided underneath.

At ~1,440 kg, the HZ Sandman is no lightweight. What amazes is how heavy the model is. You’d think it will probably be a lightweight since, let’s face this, it is like a metal vacuum flask. So for the price, you do get a lot of metal, in terms of surface area and weight.

The verdict? I think this is a great addition to anyone into Australian vehicles, panel vans or just something beyond the ordinary. Short of being excellent due to the pointers I highlighted above.

For me, I am very glad to have gotten it having switched my pre-order from an XT Falcon GT. This will not be the only Sandman I get as I plan on having a fleet in rainbow colours eventually.