The HSV (Holden Special Vehicles) GTS-R one of the last Australian-made performance vehicles. Starting out as a humble Holden Commodore family sedan, a powerful supercharged GM LSA Generation IV alloy V8 is installed (435kW of power and 740Nm of torque), along with a unique body kit with wider front fenders, side skirts and a rear spoiler and lightweight, 20” forged alloy wheels. There are also some unique interior appointments to differentiate them from their standard counterparts. Think of HSV as what AMG is to Mercedes-Benz and what M is to BMW. More information can be found on their website www.hsv.com.au/gtsr/#introduction. The model being reviewed is finished in the eye-searing ‘Spitfire’ green, which will stand out in any collection.

The model is made by the Australian model maker Biante Model Cars, which has been around for over 20 years. For collectors unfamiliar with the brand, they make full opening die-cast models of a range of Australian cars, both classics and modern ones, and also replicas of the local V8 Supercars touring car series. The prices can be considered around mid-range, between $200-$250 AUD. To put that in perspective, that’s just over half the price that AUTOart asks for their regular models, but more than three times the price of a base model like a Maisto or Bburago. This particular model when released had a recommended retail price of $200 AUD. 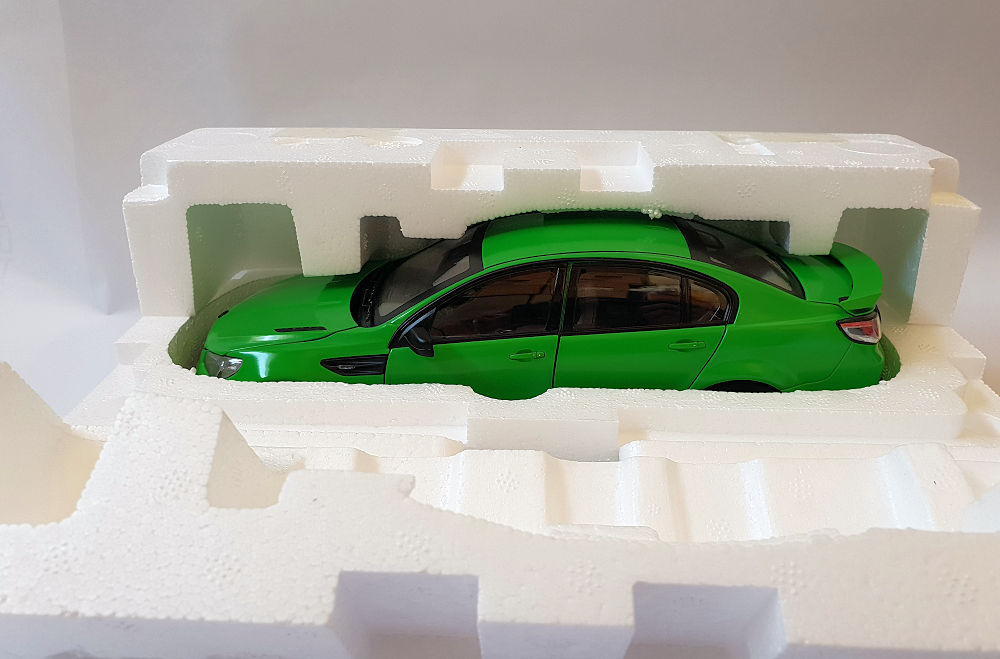 The outer package is an enclosed box, featuring colour artwork of the GTSR in its side view. The model is packed securely via four screws in a foam box, which is opened via the top sections. It also comes with a numbered certificate of authenticity, which in this case is limited to 726 units.

When removing the model from the box, one needs to be careful as it features full opening parts and no straps securing there. And also it is made in diecast metal, which gives it a nice, heavy feel. In a world where we are seeing more and more sealed, resin or composite models, it’s great to see that companies are still making them the traditional way for less well-known Australian cars! 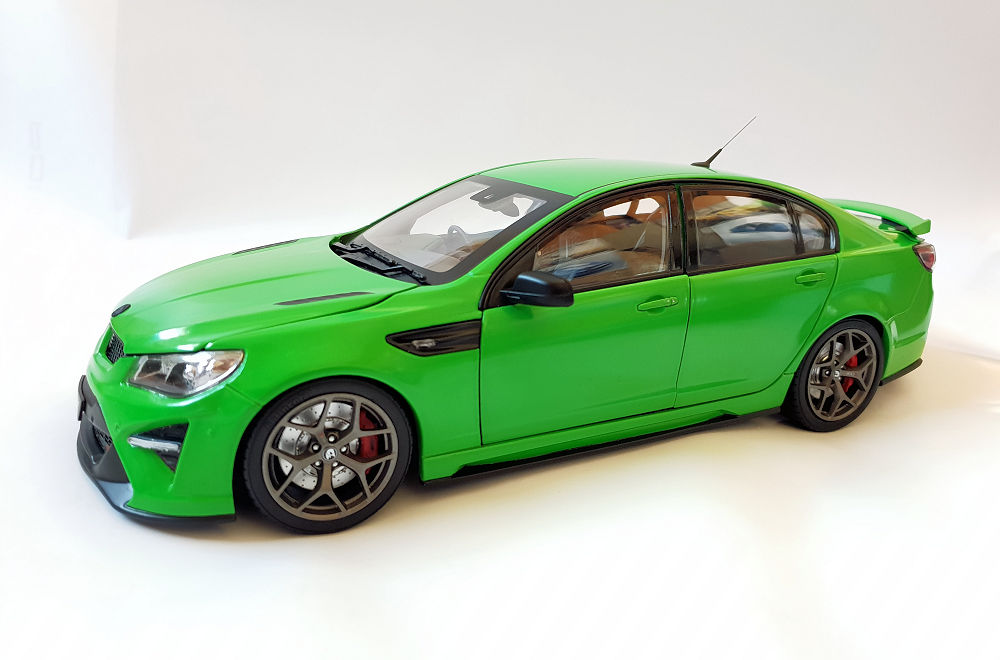 Having seen the 1:1 version in person, I can confidently say that the body shape is replicated faithfully and accurately, and true to the original. The stance of the model is spot on, sitting low and wide. According to Biante Model Cars, the model was developed directly from the genuine HSV CAD data, which definitely shows! Note the antenna comes as a separate piece and can be installed once the model is displayed. This is to prevent the all too common issue of antennas being bent or broken during transport and/or removal of the car from the packaging. 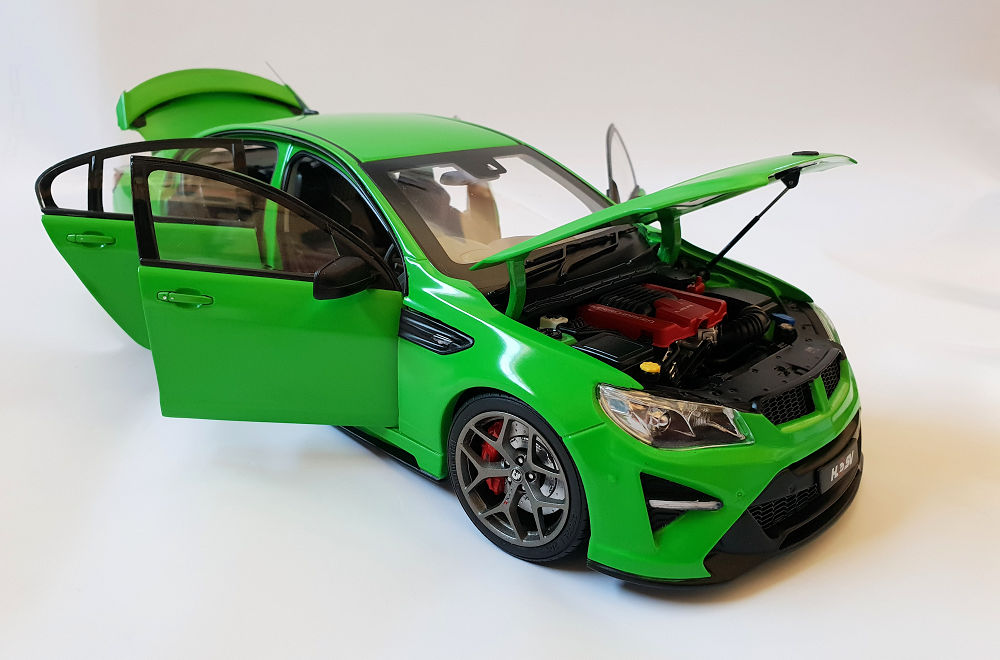 Coming closer to the details of the model, we start looking at the paintwork first. The bright ‘Spitfire’ green is presented in a semigloss finish. It is well applied and consistent throughout. There is some stray black paint near the black window trim surrounds on the rear doors, but this is not too noticeable when displayed. The side mirrors and lower sections of the car (lower grille, side skirts and rear skirt) are in contrasting flat black. 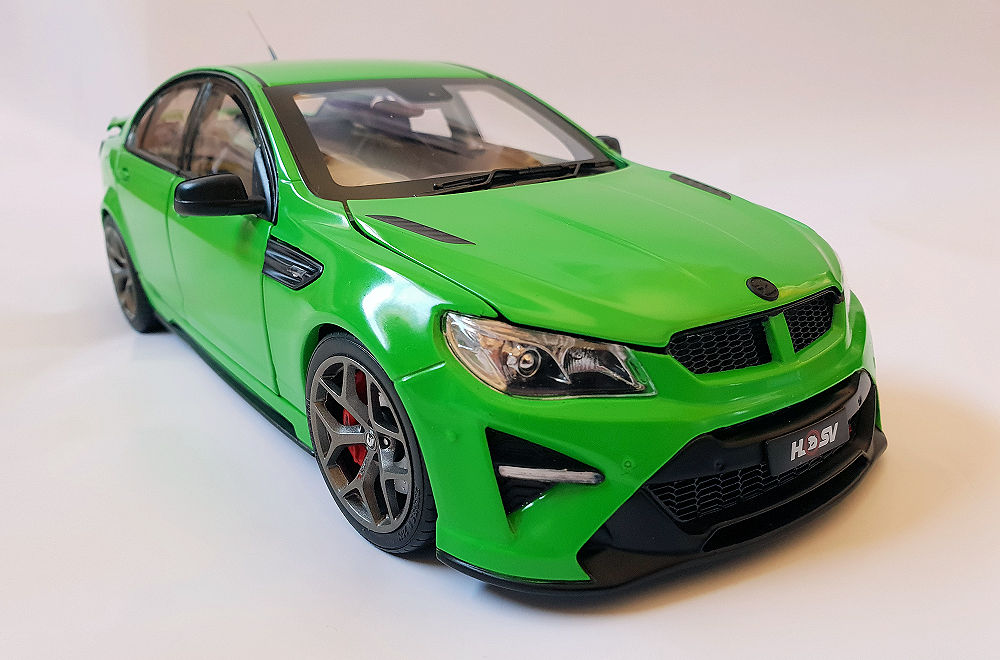 The black HSV emblems are accurately produced in black, with one the bonnet and another on the boot. The ‘GTSR’ badges (produced as metal transfer stickers) are excellent and sharp, with one affixed in the lower front grille and the other on the boot. Speaking of the grille, these sections are perforated and executed in plastic. Note the parking sensors moulded into the front and rear bumpers. Another great feature is the so-called ‘Aeroflow’ rear spoiler which has unique mounting posts – these are faithfully scaled in 1/18.

As mentioned previously, the model has full opening parts. The gaps in the doors are more or less consistent and not too big. However, the gaps are noticeable on the bonnet (near the front fender) and the bottom of the boot. All the windows are correctly positioned and flush with the body. In saying this the operation of the opening parts is flawless. When in the open position they stay in place and when in the closed position they don’t come loose. 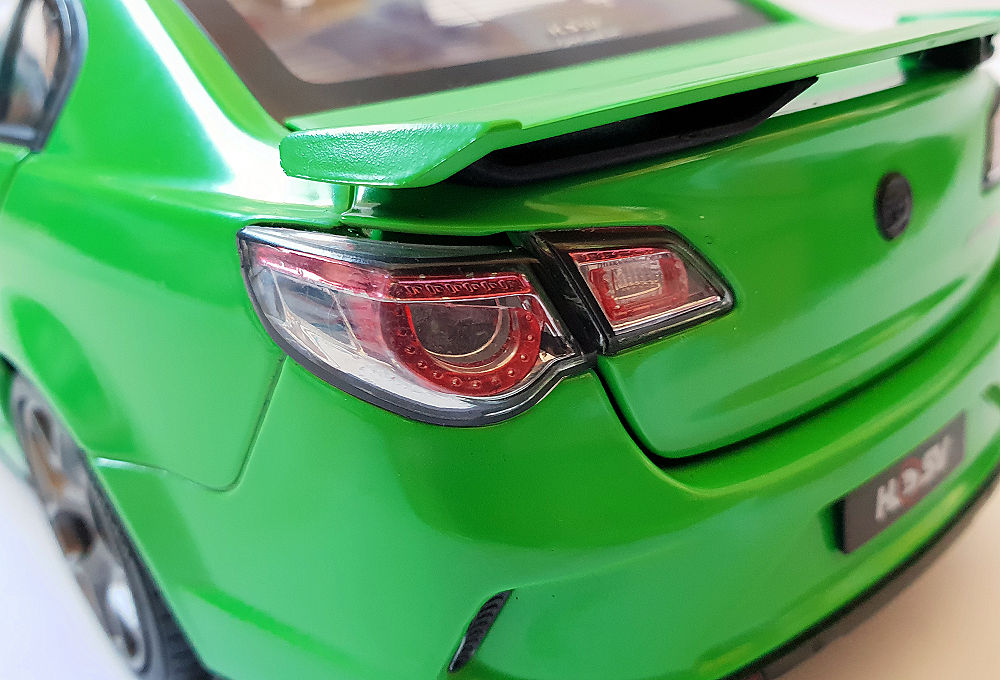 The headlights are taillights on the car that are accurate and true to the original. They replicate the multiple elements and the rear has the contrasting red sections. The taillights even have the LEDs moulded, which is a great touch. The fog lights and side indicators are nicely produced in clear, however, you can just see the visible pins that hold the side indicators into place. Also worth mentioning is the window demister in the rear window, and the ‘I just want one’ slogan, which comes with every HSV. Nice touch Biante! 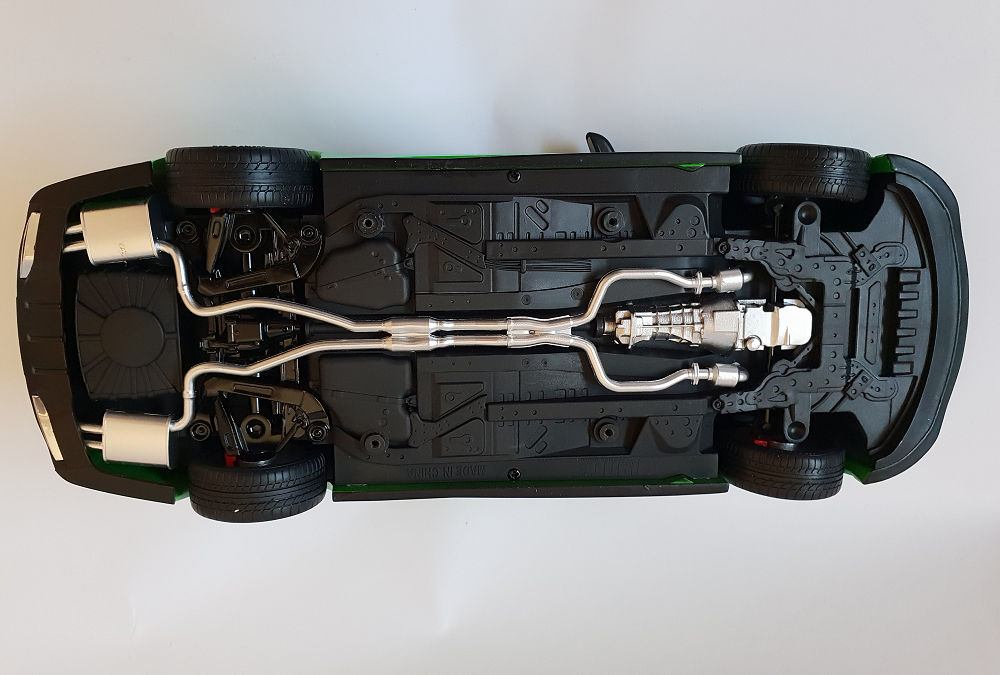 Turning the model on its underside, there is some great detail, including the six-speed transmission, full-length exhaust system and key suspension components (which are painted in gloss black). I would have liked more detail on the LSA engine but still a great effort! 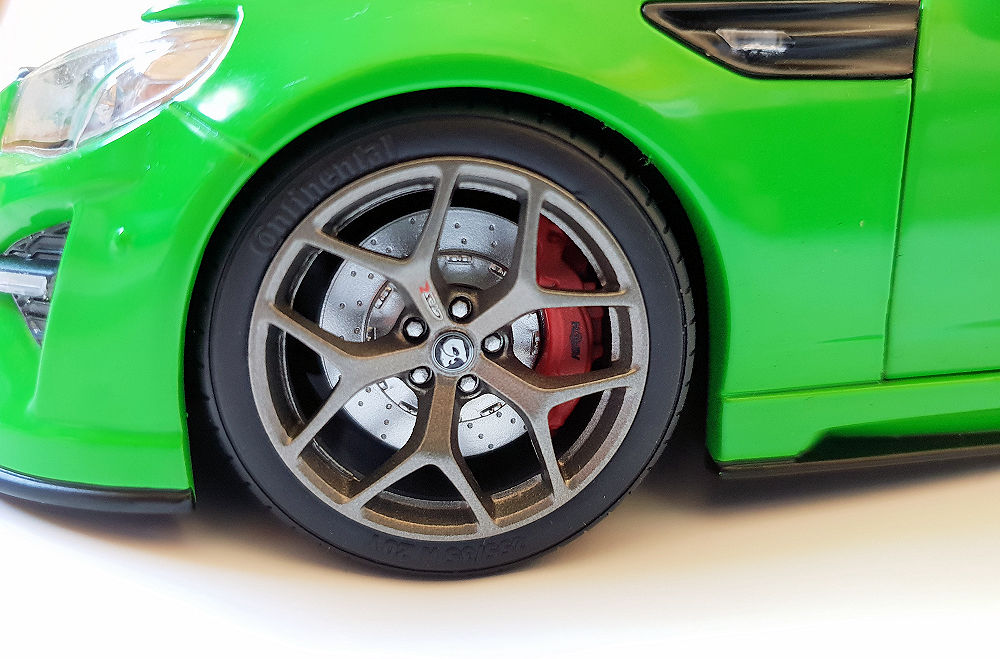 One of the highlights of this model is the wheel/tyre package. As well as being accurate, the wheels are chock-full of detail, from HSV emblem, the wheel studs and GTSR logo to the Continental-branded tyres. The brakes are excellent, despite not being a photo-etch part and the callipers are finished in authentic bright red with the HSV logo printed on. Note the callipers stay in place as the wheel/brake discs rotate. 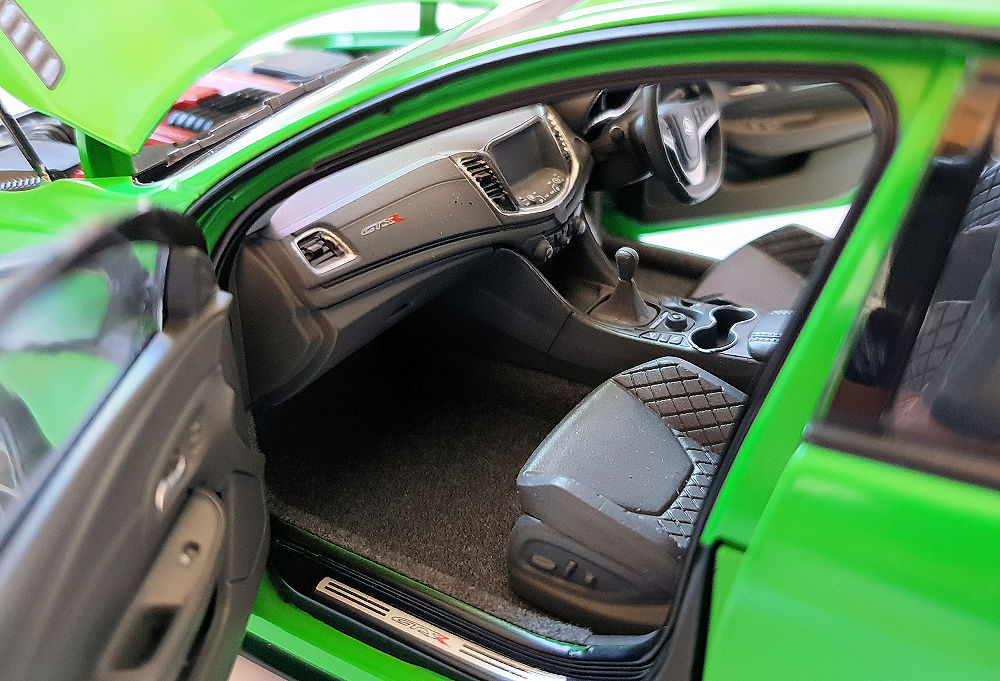 Moving onto the interior, all the four doors open to reveal the interior of this legendary Aussie muscle car. The doors operate using hinges, so no doglegs insight. The first thing you notice is the GTSR branded door sills, of which there is one for each door. There is also the fabric seat belts (with the matching painted buckles and attachment points) and fully carpeted floors. The dashboard is well-executed, with fairly detailed instruments and a well-defined touchscreen. The gear shifter and cupholders are faithfully replicated, along with the cross-drilled accelerator and brake pedals. The steering wheel is also well detailed and finished off with another detailed HSV emblem. Also, note another GTSR logo on the dash on the passenger side which is a great touch. Silver paint around the air-con vents and on the doors panels are well defined.  One point of improvement would be the seats, which although have the details look a bit too plastic. In the real car, the seats are leather, so some improvements in texture would make it look a bit more real. 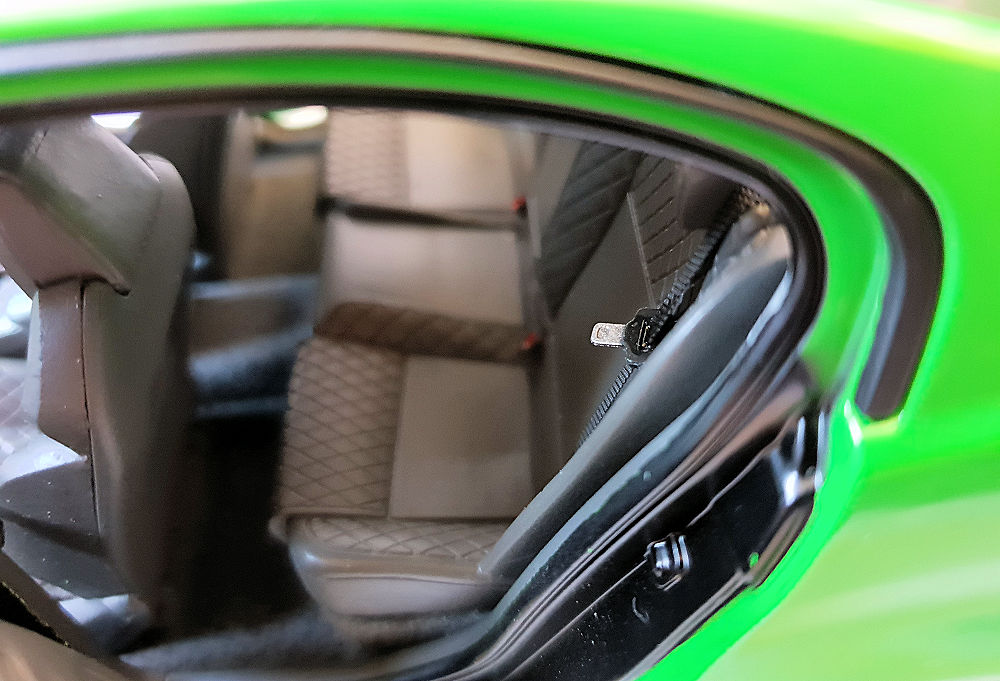 The boot is fully carpeted like the interior but other than that it is not much else. 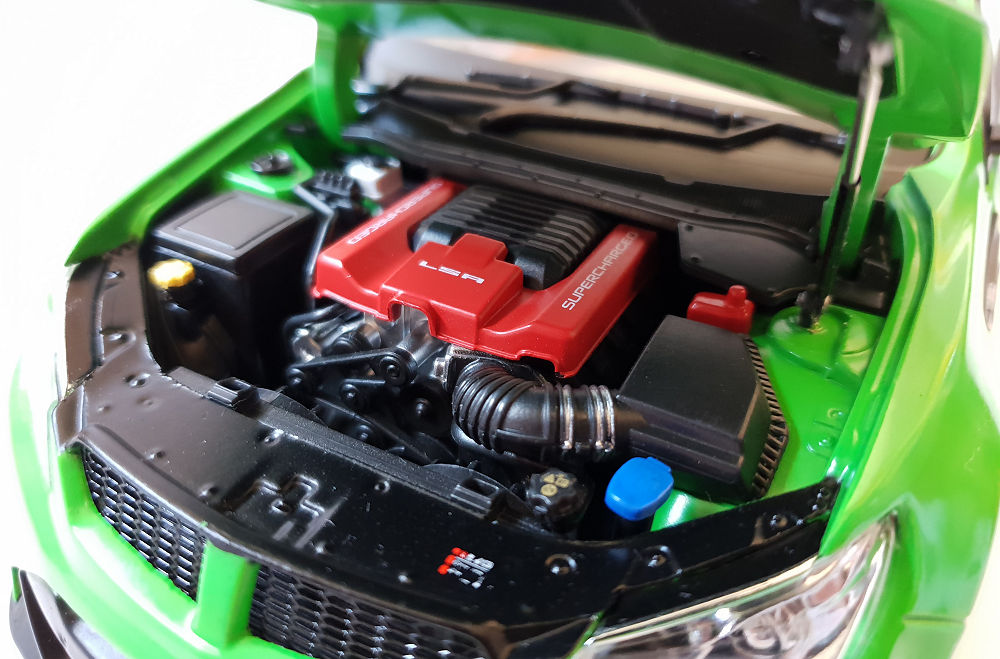 Another highlight of the model is the engine bay. The bonnet is attached via doglegs, with one telescopic support strut. The operation is smooth and as mentioned before the bonnet will hold in place. The engine is a sight to behold, with the famous LSA red covers (which can be found in other General Motors products) and huge supercharger dominating the engine bay. Various decals and painted details add to the realism of the engine bay, including pipework, fluid reservoirs and pulleys/belts.

Overall Biante Model Cars have created an excellent model of one of the last Australian-produced model cars. It is a commendable effort that it has been produced in diecast with fully opening parts, given the low edition number. In my opinion for the price point, the details are excellent, especially the badgework and wheels. Models of Aussie model cars are very popular and collectable in Australia, but for those around the rest of the world who want something different in their collection, I would highly suggest this GTSR to start with. Enjoy the pictures!