Just like buying a Mercedes S-Class after driving a Kia, buying your first CMC model is a bit of a shock – the good kind, of course. I’ve been meaning to get around to buying one for years, but somehow I was always distracted with other models. You know how it is. The planets eventually aligned, so to speak, and I was given an exceptionally good deal that I could not pass up, and soon enough the box landed at my doorstep. 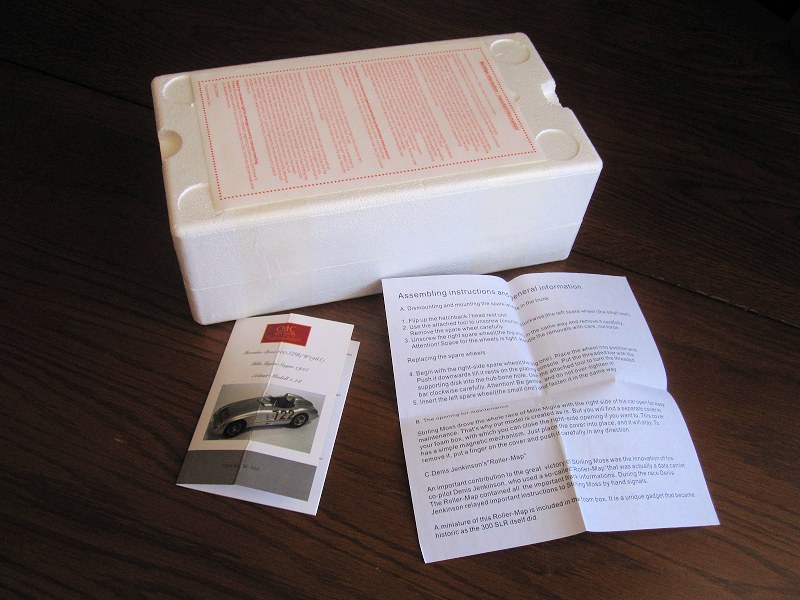 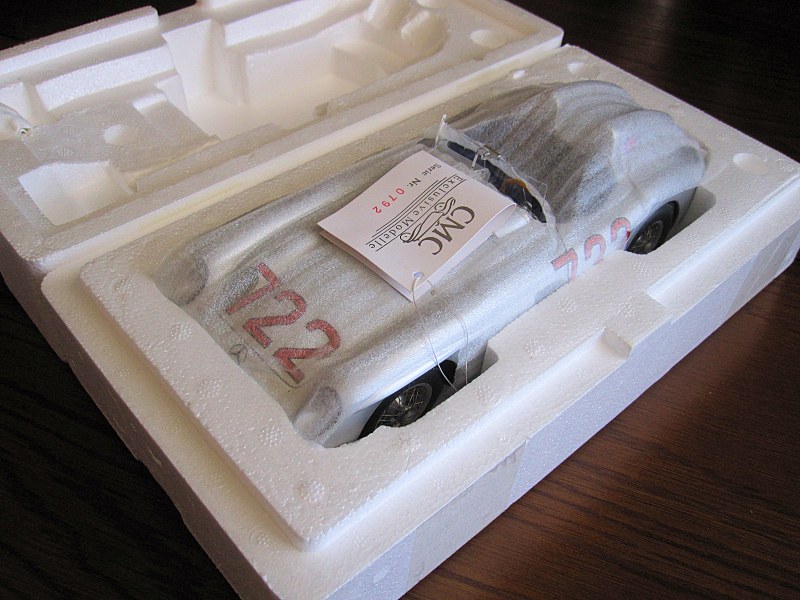 CMC is a German company, so obviously, everything is being taken very seriously here, and the packing and included instructions are all top notch, though written in endearingly bad English. They include a sheet on how to remove and reinstall the spare wheels (which is a little complicated, as I’ll explain later), two tools – one to open the hood and another to screw in the bolts  that hold the spare wheels – and a small bag holding a rectangular, plastic object that turned out to be a scroll map that co-driver Jenkinson used to guide Stirling Moss through Mille Miglia, a grueling 10 hour race, which they won in 1955. Great attention to detail, though I left it in the box for obvious reasons. 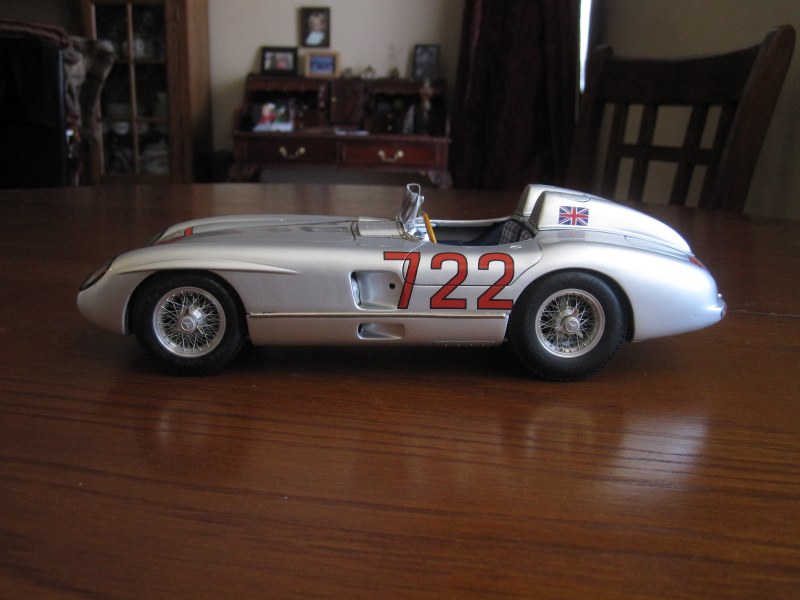 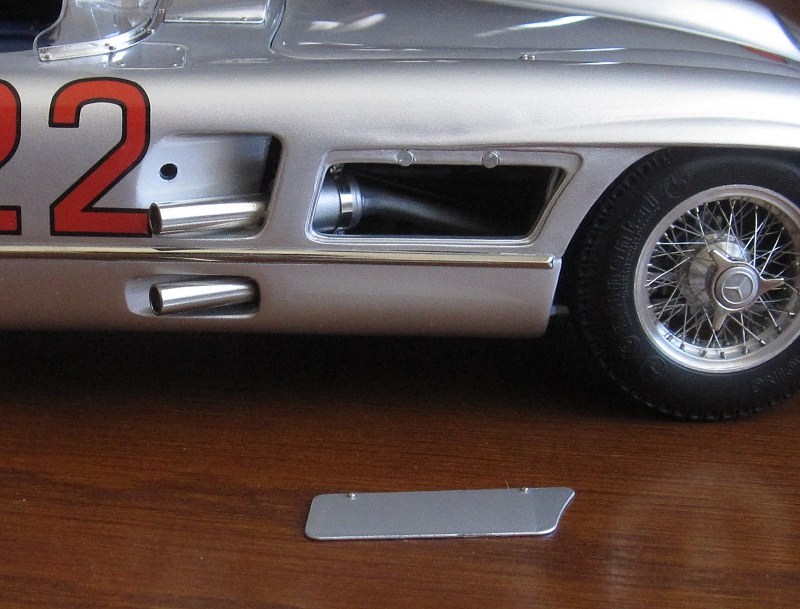 This model is one of those that forces you to think “where to begin?” when trying to describe it. The paint is smooth and outstanding, with absolutely no flaws present. It is undoubtedly the best I’ve ever seen. The model is very heavy and consists of over 1500 parts. On the right side, there is a panel before the exhausts that is held in place by magnets and can be removed to see additional detail. The wheels are a work of art, with hand-mounted spokes and beautifully made knock-offs. The tires have accurate markings and tread pattern and lend the model great authenticity and realism. The wheels can of course be removed for better access to brakes and fully functional suspension. A lot of other manufacturers claim to have a fully functional suspension, but almost all of them exhibit awkward feel and depress in stages (or not at all). Most of the time you’re scared to push down on them for fear of breaking something. The first time I pushed on the SLR, it squatted through the entire range of its suspension as smoothly as a real car. Simply outstanding. 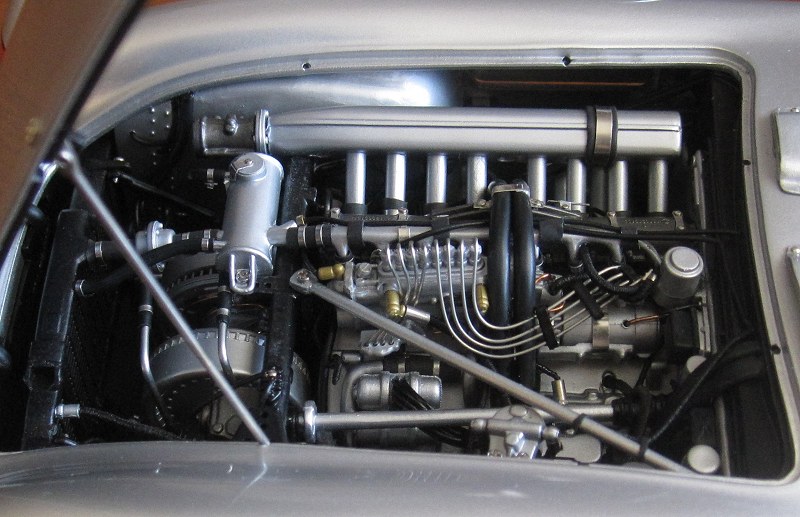 Listing all the photo-etched parts would take forever. The engine compartment has so much detail, I was struggling to take it all in at first. You can see materials like copper, stainless steel, and aluminum being used throughout the entire car. The engine cam covers are printed with authentic numbers and there is a plaque that has print so tiny, you wonder how they printed it. 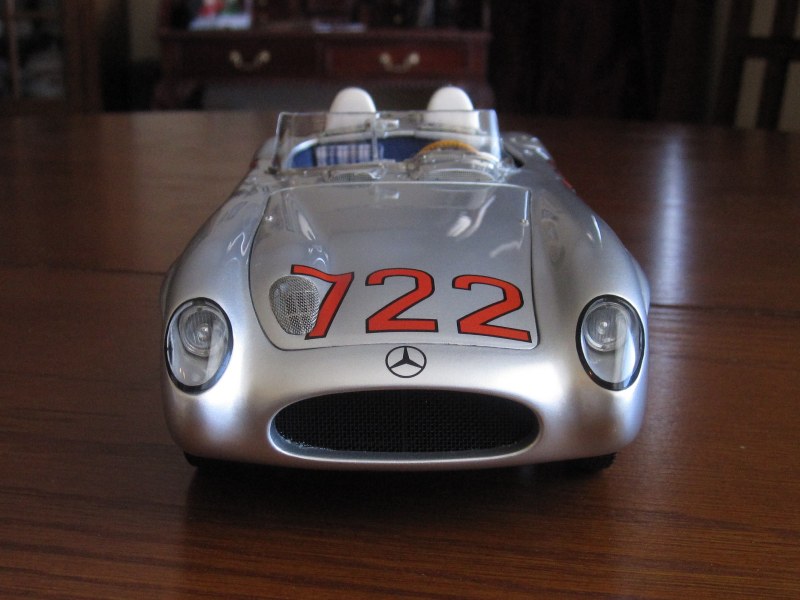 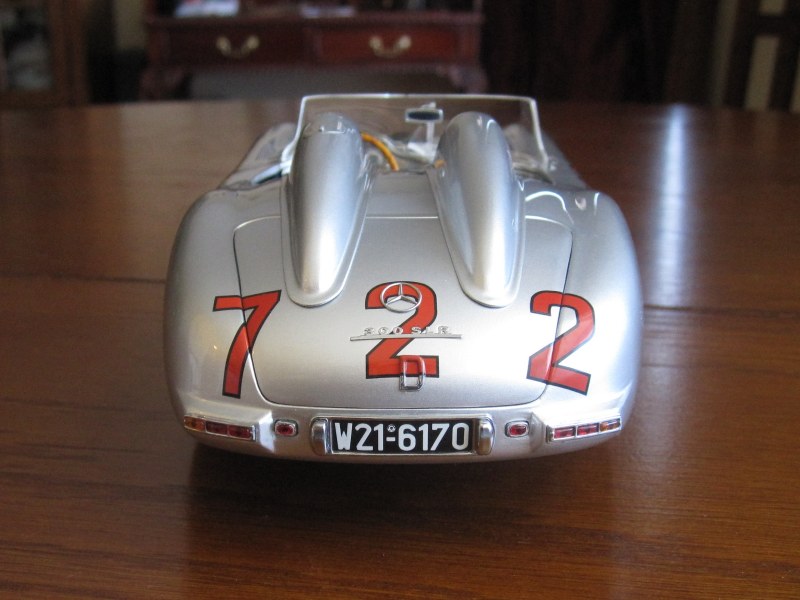 The headlight covers are clear as day, and the genuine wire mesh cover taken straight off the W196 Formula 1 car (on which the 300 SLR is based) is lovely. My only criticism with this model is the sloppy work seen at the bottom left end of the front grille.

The interior is flanked in blue leather, and a stainless steel, three-spoked steering wheel with a simulated wooden rim. I read somewhere that the gauges are glass-faced, but I can’t see that here. They are clear and very legible though. The seats are draped in cloth and the gearshift is a thing of beauty. 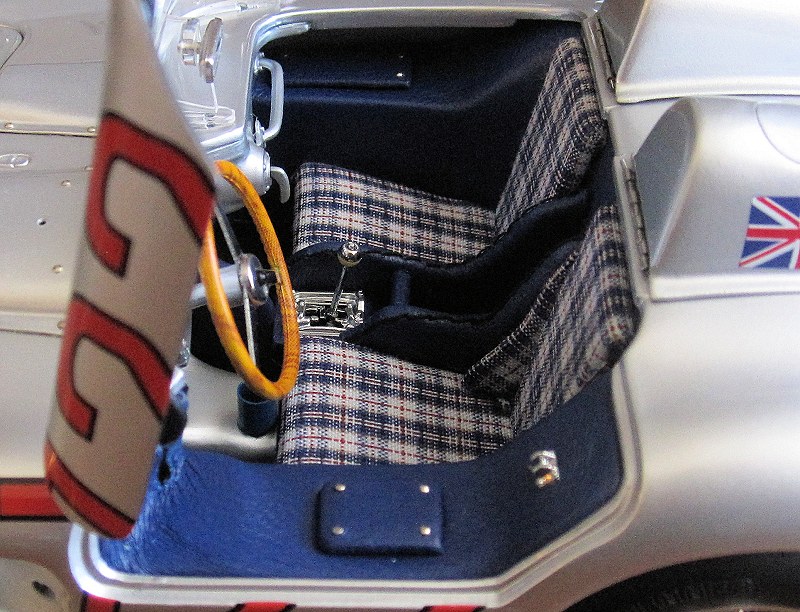 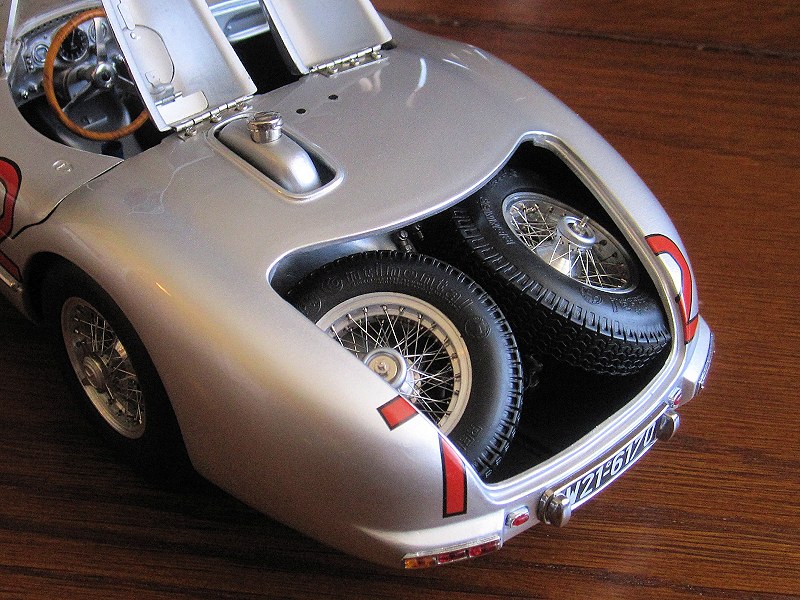 Going towards the rear, there are headrests that can be lifted to reveal a fuel filler cap (which is also accessible through a working cover that is incorporated in the headrest itself), which can be removed. The trunk houses two spare wheels, the right one larger than the left, which are removable with the aid of an included tool. Reinstalling the right one was easy enough, but the left one gave me trouble, so I left it as is, afraid to damage something. The thread for the securing screw is too far to the left, so it’s hard to twist the screwdriver without rubbing against the edge of the bodywork. Once the spares are removed, the trunk reveals a giant fuel tank and various functional bits and wires, which, if I’m honest, don’t look as impressive as their counterparts in the engine bay.

The underside of the car does not reveal much except the bottom half of the transmission and some suspension details and vents. 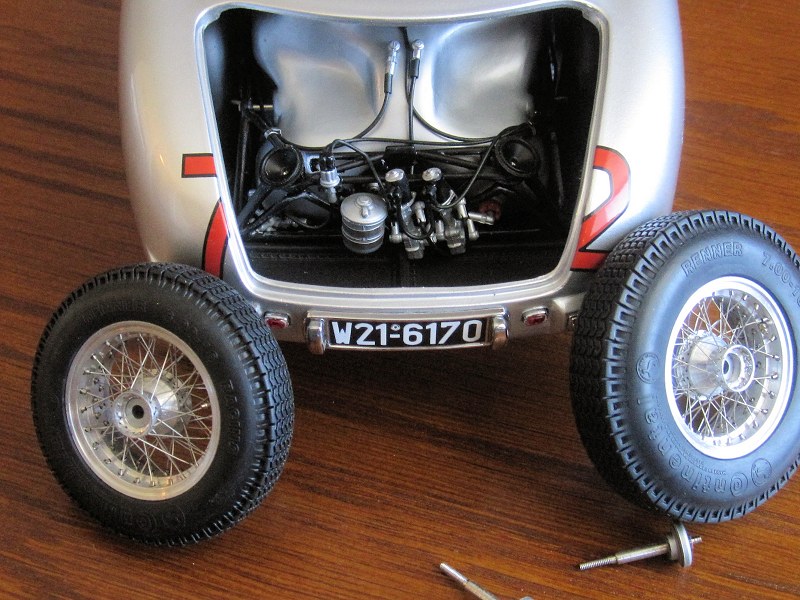 Overall, the model looks outstanding from every angle and that lustrous, liquid silver paint continues to catch your eye. The variety of materials present will keep you shaking your head in disbelief. Stainless steel, copper, aluminum, rubber, fabric, leather all come together as a cohesive package. You can’t help but stare at it in your display case and think to yourself “you did good”.

So there you have it folks. This review was never meant to judge the model as good or bad. We all know CMC is at the top of the diecast game. Instead, I wrote it to celebrate a great model and attempt to convey the “shock” of someone who just acquired his first CMC model. I hope it’ll motivate many of you to do the same, because considering this masterpiece cost me less than some of my Autoart Signature models, there is simply no reason not to. 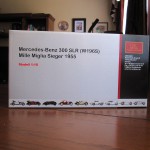 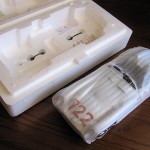 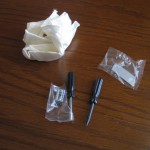 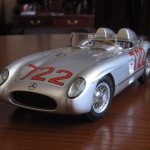 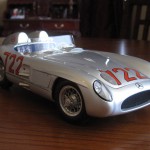 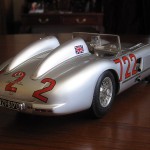 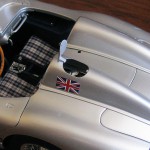 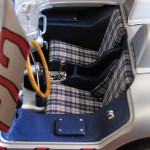 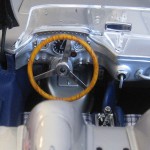 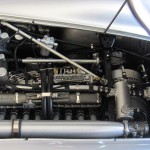 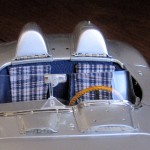 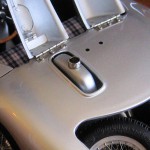 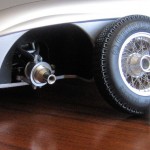 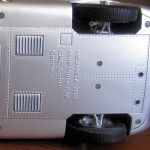 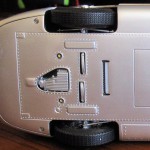