Introduced to the public at the Frankfurt Motor Show IAA in 1963, the “Grosser” (Grand) Mercedes 600 Pullman was the ultimate in luxury that Mercedes built after Germany´s “Wirtschaftswunder”, its swift and miraculous economic recovery from WW2´s devastation in the 1950s. Only rivalled by Rolls Royce, Bentley and American marques such as Cadillac, its development from 1956 was a “money no object” prestige project full of innovations for Mercedes. Many functions were operated hydraulically or pneumatically like suspension settings and closing the boot at the touch of a button. It received the biggest German contemporary car engine, a 6.3 litre V8 that propelled the unarmoured version of this 6.24 metre, 2.7 ton behemoth to 62mph in 12 seconds and maxed at a respectable 120 mph. State limousines, however, will most likely have been armoured and then reached 4.4 tons. 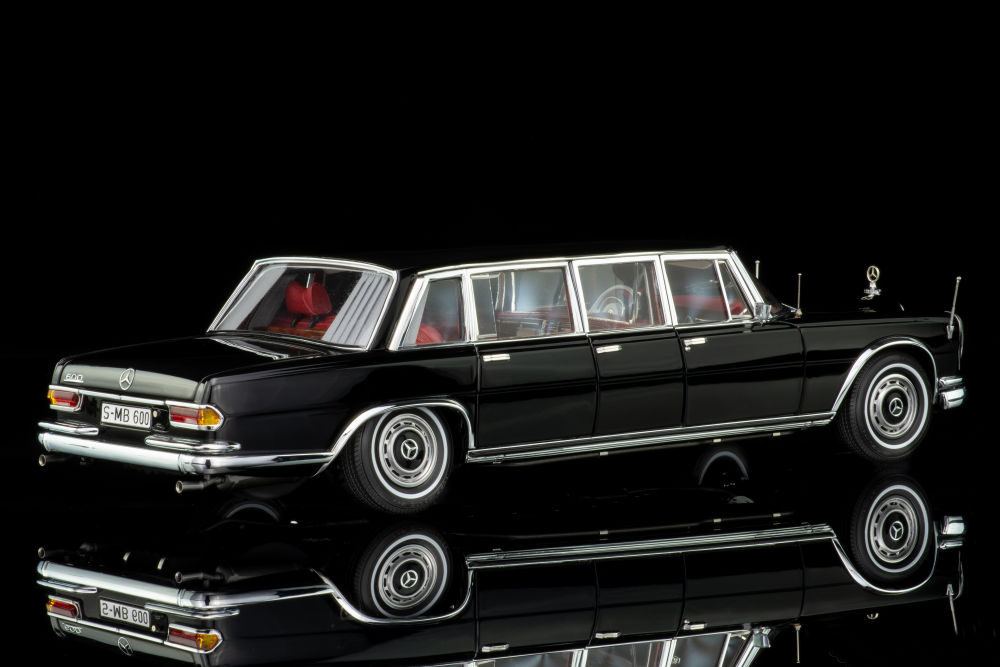 Built from 1963 to 1981, this stretch limousine will be remembered differently in different parts of the world. For too many, it will be a chilling reminder of some dictator´s or tyrant´s indulgence in luxuries at his oppressed people´s expense that – despite its price tag equalling a sizeable detached family home – never created a financial profit for Mercedes. Instead, it did the automaker a great service for its reputation … and that of the young (western) German republic. Matching its modesty of choosing small town Bonn as its provisional capital, the German government never owned this state limousine in its fleet, but had to borrow one (+ a driver, an identical second reserve limo and service entourage) from the manufacturer each time an honoured guest was lucky enough to be treated to be ferried around in it… that is one of its versions. 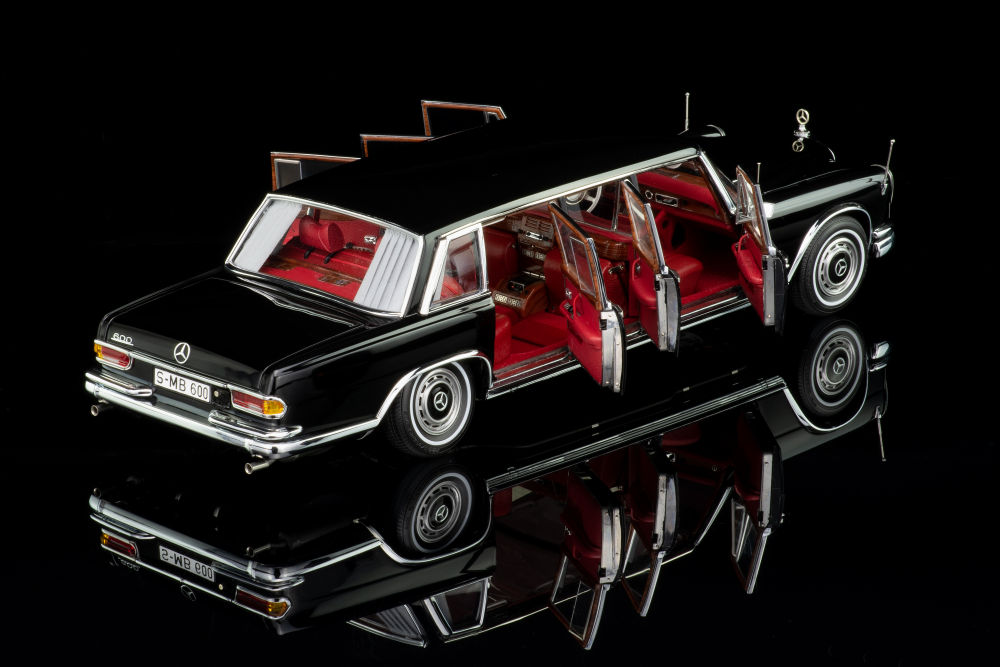 With its first release CMC portrays the 6-door version with folding, front-facing rear seat front of the rear bench and thus differs from AUTOart´s 4-door, opposite rear benches version. Admittedly, this bus-like setting does not seem very stately. In contrast to AUTOart, CMC´s limousine offers screw-on (metal) flag-poles to lend diplomatic status to its model (and adding ship-model textile flags is much recommended). The extendable telescopic antenna and three-dimensionally embossed number plates instead of 2D are more features that show CMC´s unsurprisingly typical attention to detail. 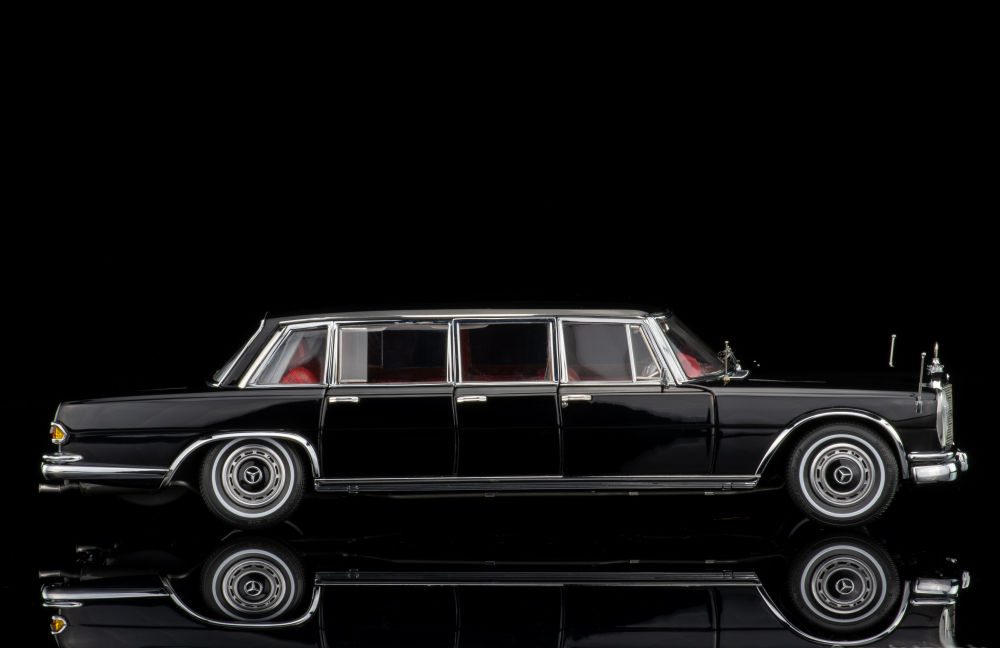 Of course, as to be expected, this is not the only difference of a CMC model over its AUTOart counterpart. With CMC, collectors have long come to be used to the fact, that the wheels are detachable, screwed on with tiny nuts that you can remove with a tool supplied in a small extra metal box. That´s where you´ll find the metal hub caps, too, that must be magnetically attached to complete the elegant picture of the wheel and its correctly branded whitewall tires. Some found fault with gaps of the opening parts on early samples, but it is good and proper that CMC supplies an innovative suction-cup-opening-tool to gain access to the boot and the spare wheel in it if you really wish to perform a wheel change. Most definitely one of the usual opening tools won´t do and you´ll want to use this on other models, too. Unfortunately, the boot lid does not stay open on mine and heavily falls close, the price of diecast I am willing to pay. 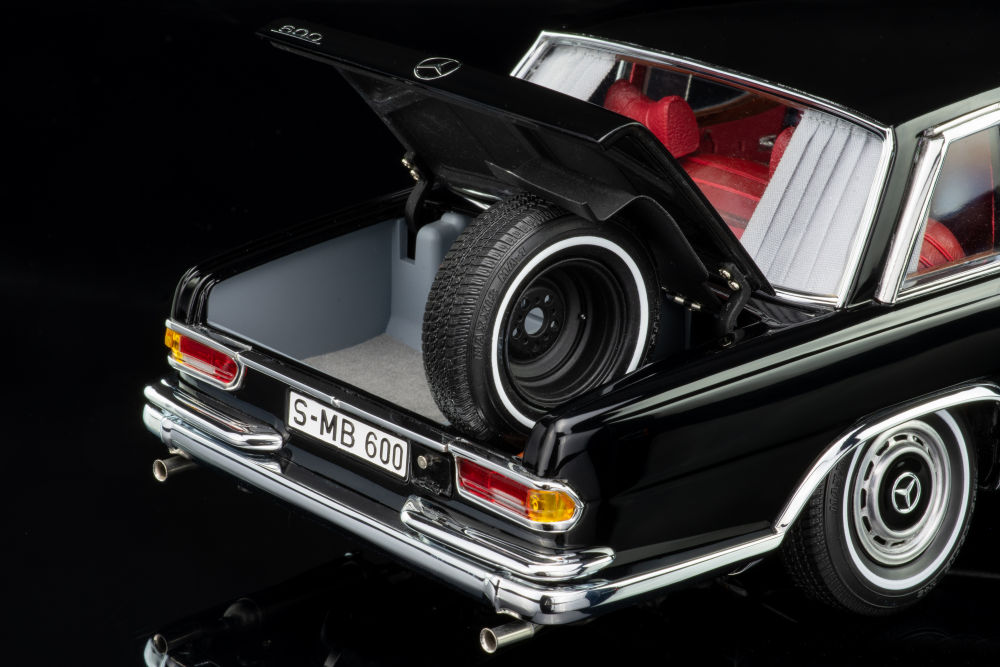 Once having moved all the distance to the rear end, let´s complete this by giving due credit to the crystal clear taillight lenses and sharply distinguished light European light cluster of different reds, white rears and amber direction indicators underneath, all framed in chrome that like all the rest of the rich chrome trim does not look as if it was plastic. To the right of the license plate, a fuel flap will open to give access to a non-removable filler cap. Protruding from underneath the car are two real metal, hollow tail-pipe mufflers with trumpet-like openings.  In the rear windows, you can see the real cloth curtains that were meant to offer some privacy in the period-correct absence of smoked windows. These cannot be and would not have been closed, as state visitors wanted to be seen and photographed travelling in this car (the German limos had an orange interior light following a press request so that visiting heads of state don´t look so pale in the papers). 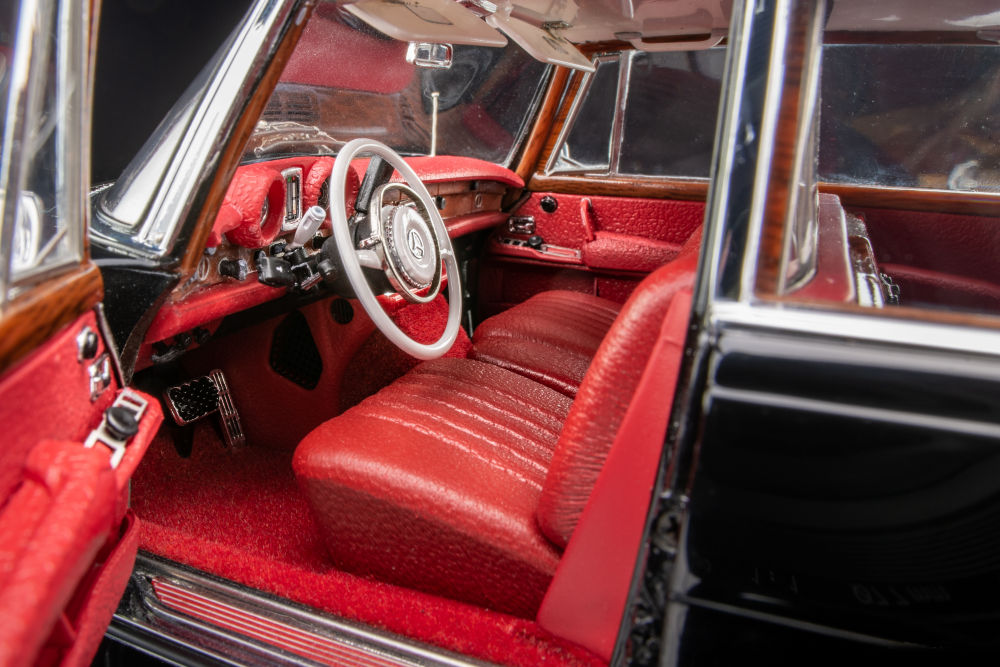 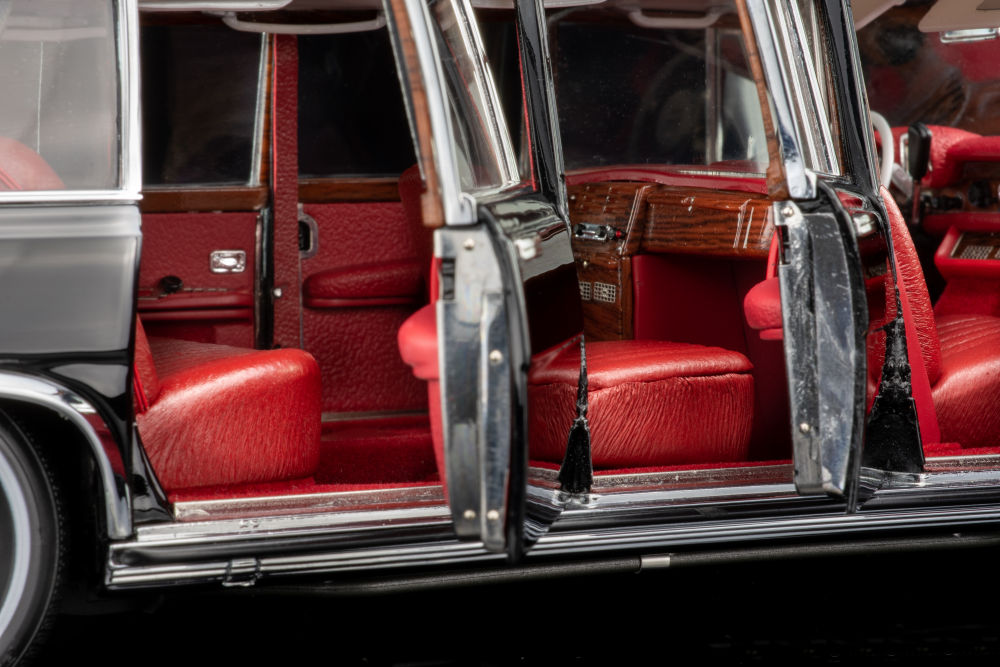 Opening the doors is as great a moment as in every state-visit, model-wise not because of celebrity status occupants but the sumptuous interior. Here the car is the star: a carpeted floor has become a matter of course on high-end models, but real leather on seats, headrests, door trim, footrests, the armrests of the doors and the downfolding centre-armrest, as well as the dash and the parcel shelf, is what sets CMC apart from any other manufacturer. Even the front-facing folding seats are functional and leather-clad. The wood trim veneer pattern is the benchmark. All the air-con openings are perforated, even in the doors´ armrests and the wood veneer section of the parcel shelf. Some have complained about the windows being too thick, but I fail to see the point … without resorting to excuses as reminding readers that armoured glass would have been arm-thick. On the contrary, the folding extra wind-deflectors and the front door opening triangular section are very delicate. What might appear a little thick is how interior wood trim and exterior chrome frame sandwich the window into a double burger with the door ajar. 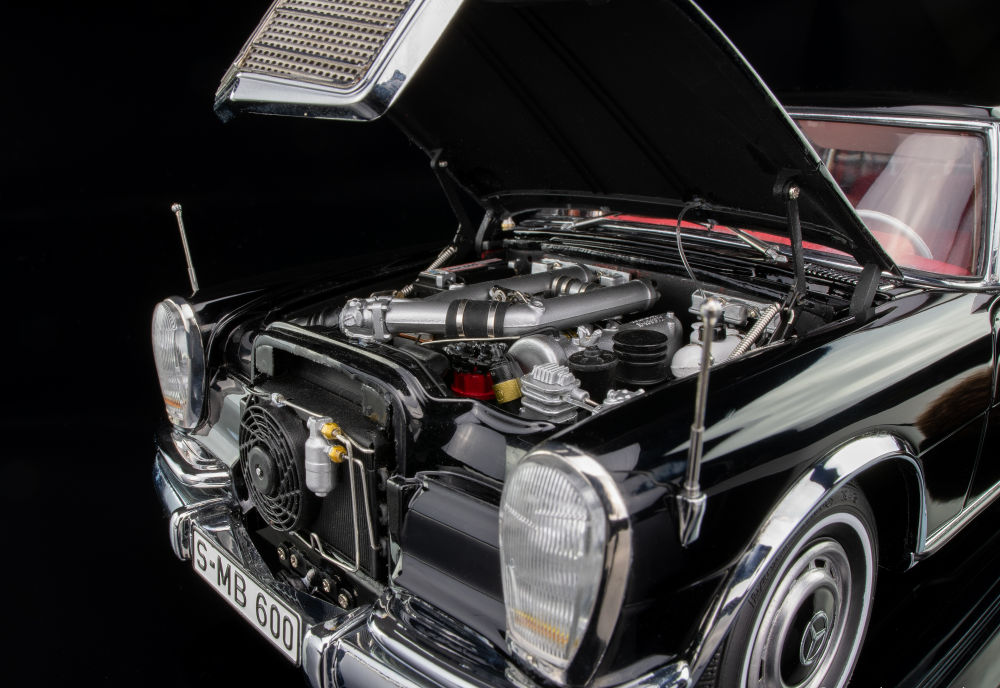 This all sounds as if it could not get any better… before you pop the hood and the metal perforated radiator grille. This is done through a scaled-down replication of the opening mechanism, including a spring either side to keep the hood ajar. If you are usually disappointed with what is under the hood of a scale model, I promise, you won´t be here. There is an abundance of depth and detail, not only the V8 but all the technology behind the hydraulics, pneumatics, air-con, etc. that made the Grand Mercedes the company´s flagship technically. There is more to discover in scale than what some cars of this period had for real. 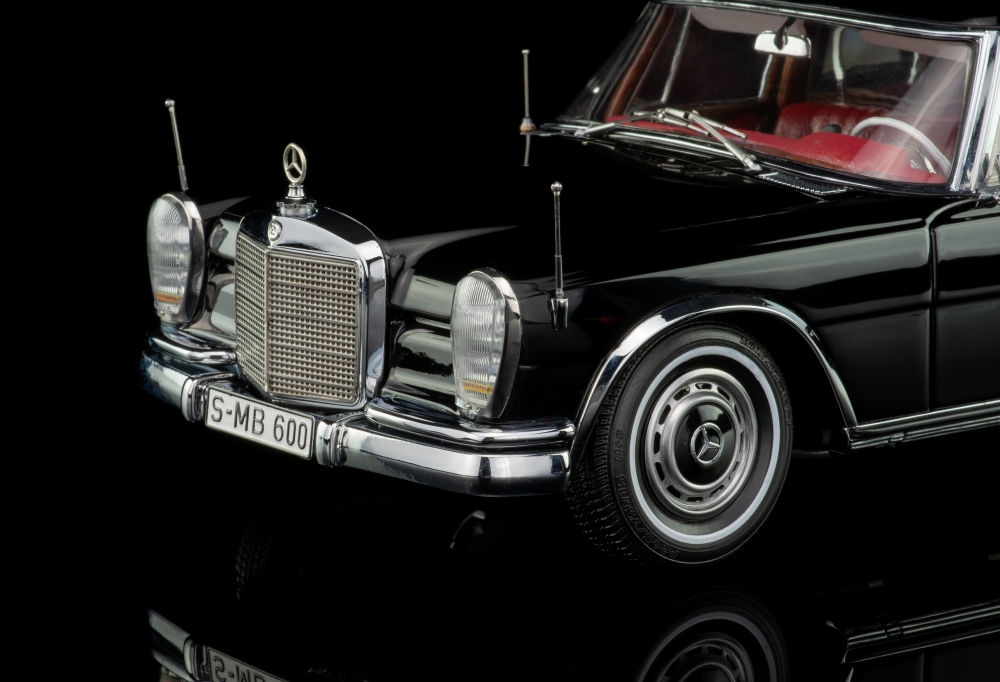 If you are not convinced and you don´t want this very badly by now, you are either excused for this just not fitting your collection theme. Or you just might not want this version, but the same in golden brown or the upcoming even more exclusive Landaulet version featuring a folding real cloth top. Or you may be hoping for the later addition of a four-door, opposite benches version with an opening sunroof. Or you already own the AUTOart that is traded for more than a thousand Euros by now. For anyone who missed out on this Mercedes so far, CMC´s price policy must seem like a bargain by comparison. Or you are on a budget and have the Sun Star instead. So there are lots of good reasons for not buying this. Don´t be discouraged, though, if none of these reasons apply to you: I have no regrets whatsoever to have bought this. If you regret to have missed out on the AUTOart until prices went through the roof, this is how fate gives you a second chance and rewards you for your patience. CMC´s Mercedes 600 Pullman deserves pole position at the red carpet.