“Speed, Style, and Beauty” is the motto under which Ralph Lauren displayed this (and some of his other cars) in the world´s leading art galleries. Few other cars unite all of these elements better than Count Trossi´s unique Mercedes SSK “Black Prince”. The supercharged Mercedes SSK range had proven its Speed in many races, e.g. scaring Tim Birkin into making the Blower Bentleys for LeMans. Chassis #36038 and engine #77644, too, had seen their fair share of racing before Carlo Felice Trossi bought it in 1933 (not 1932 as CMC advertises it), adding Italian Style, and Beauty to German engineering by having his own flamboyant roadster design body made by an otherwise unknown coachbuilder. It is this Style and Beauty that sets it apart from “ordinary” SSKs in the more utilitarian race liveries, both in scale and real life, in both of which again Trossi´s creation won numerous prizes. 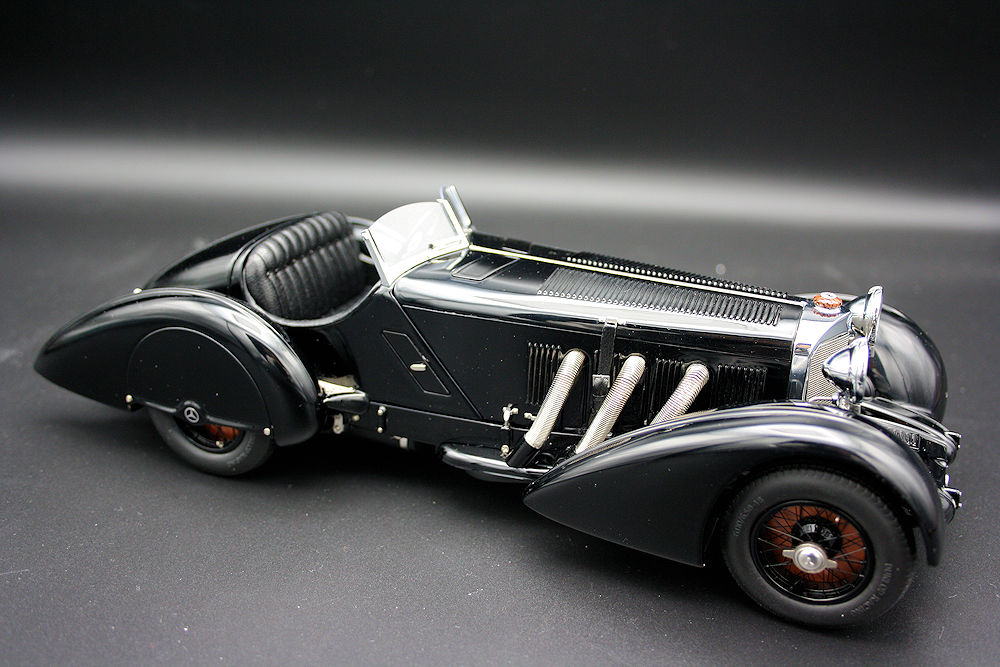 So there was a Trossi SSK in scale before? Oh yes! And I don´t mean the KK scale. With this model here CMC celebrates their 25th anniversary and revisit their first-ever model, though that originally was in 1:24th scale and aimed to compete with artisanship like Danbury Mint and Franklin Mint, while 1:18 models were very toyish things – CMC still doesn´t see other 1:18 manufacturers as competition from what they told me on the phone. So with (for now!) only themselves to transcend, how much justice do they do themselves as a manufacturer and, more importantly, the real car? 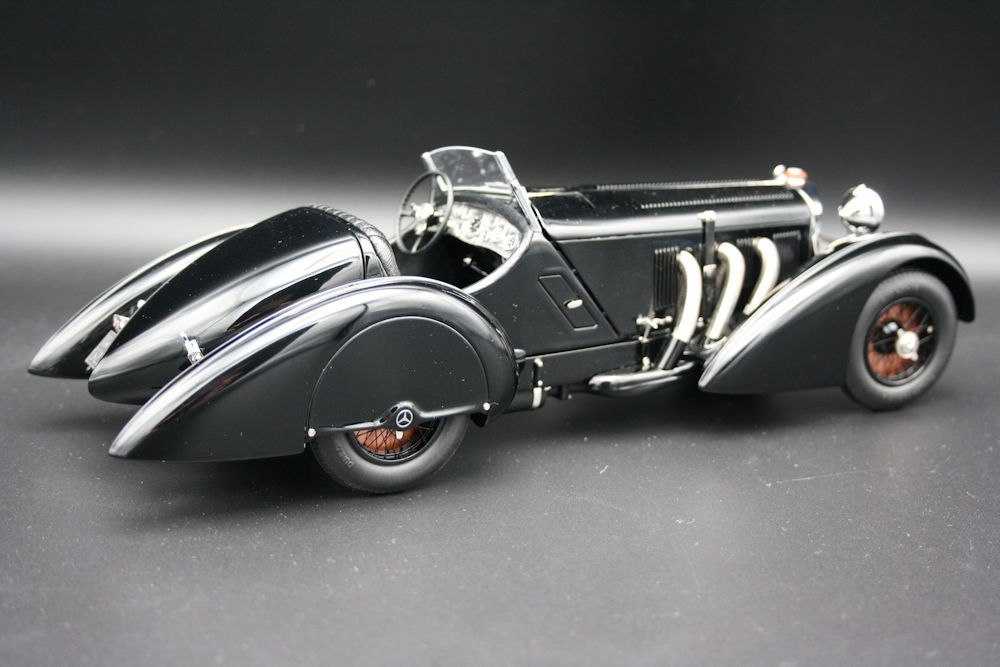 The general shape is captured superbly, the long bonnet, flaring fenders the shiny super-smooth piano lacquer black paint contrasting with the more shiny chrome metal, all of which IS real metal, no plastic (take that, all you plastic manufacturers that must not be named!). That a KK literally cannot hold a candle to this becomes apparent in the headlamps interior details: An empty shell for the KK versus this, cables running from the lamps to the bottom of a perforated photo-etched, metal radiator grille. Of course, the bonnet is louvred metal, the shiny exhaust pipes emerging from the engine bay on the right, real metal. Both sides of the bonnet can be correctly opened by unlatching the front and rear of the spring-loaded hooks on either side, but instead of unbuckling the real leather strap, it is unhinged from the bonnet´s top. Folding up the bonnet reveals the familiar SSK engine that this beauty shares with its ordinary racing siblings and it’s absolutely worth admiring the detailed engine, its plumbing and wiring. With this engine detail, you feel you could just add coolant, oil and petrol and let it run. The coolant cap on the radiator can be unscrewed, which comes as no surprise on a CMC, but is finished in wood veneer unlike what we see in pictures of Lauren´s car. 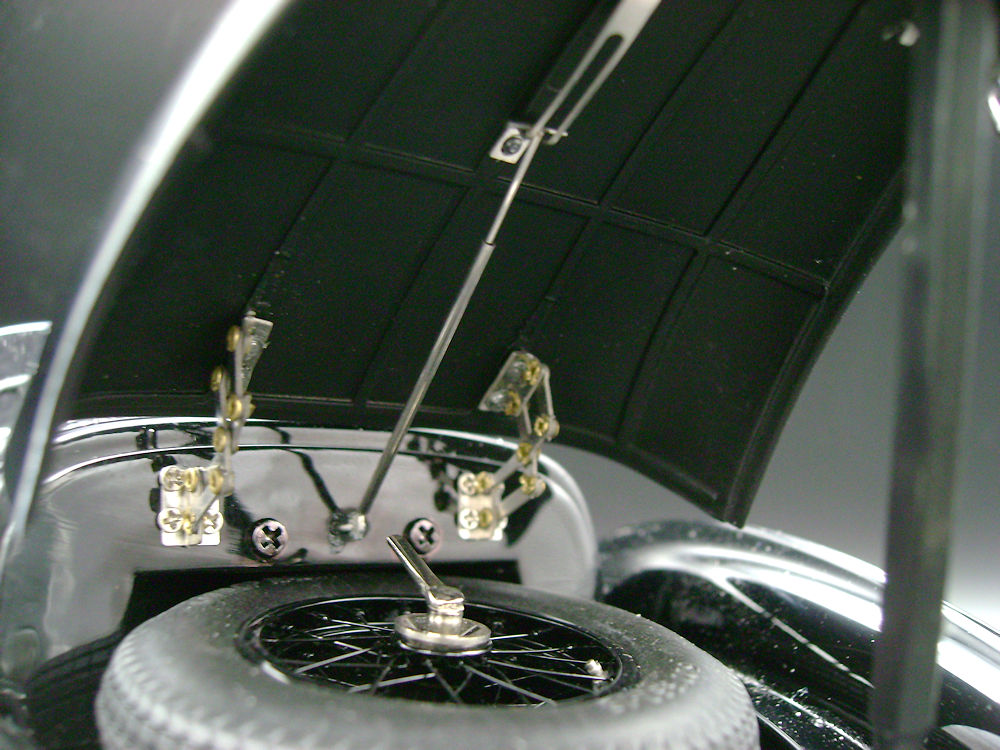 Refuelling is a more complicated process, another hint of this chassis´ racing days being over: First, you have to unlatch the metal locks on both sides of the rear which therefore needs must be quite a bit clumsy in scale. Then you need to push up the rear end. Now the German and English versions of the manual do not agree: One says, the centre rod underneath the rear will lock into place by itself, the other says you need to push it into place to hold the rear open. Well, I cannot bring mine to stay open either way, hence the opening tool in the pictures, apologies. Only then can you unlatch (to one side) and open the fuel lid (to the opposite side). So neither refuelling nor accessing the spare wheel is something to be done in a hurry (in which you probably are in a race). But once you have the rear open, you could perform a wheel change as both the spare as well as all of the wheels are detachable. On the rear wheels, the necessity of removing the covers in the rear fenders does not make this possible at modern pit stop speed either, so I have decided not to demonstrate this. 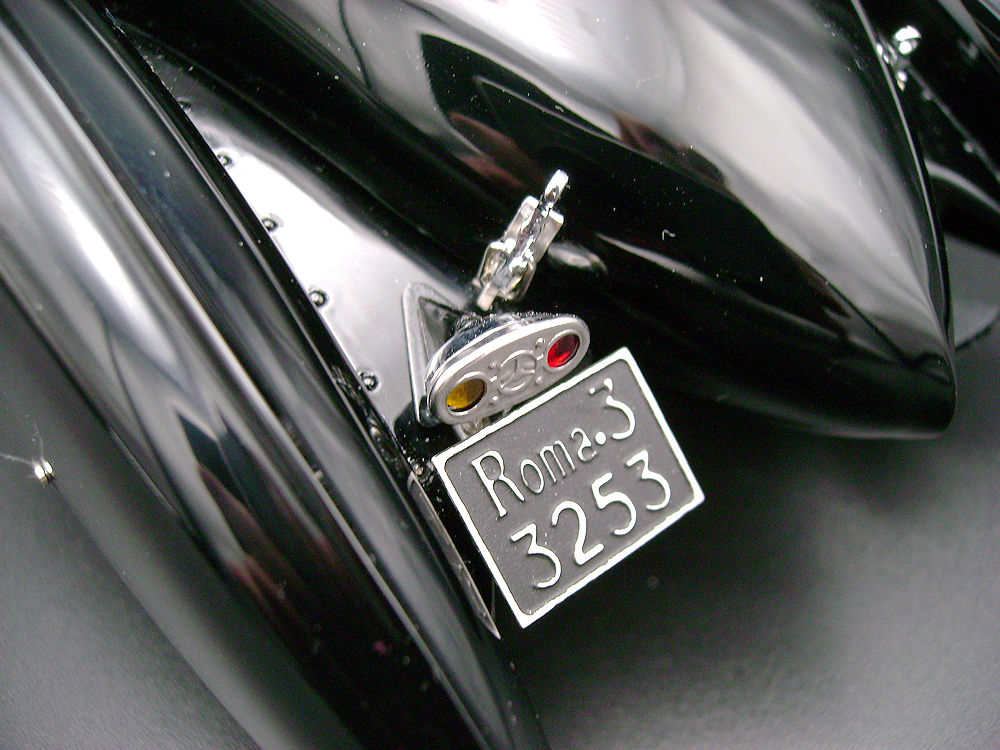 The rear exhaust end is done nicely, held up in a clamp that is held in place by a giant nut. On the left, you get a very nice replica of the original Rome registration and the rear light assembly. While these lights certainly look nice with the Mercedes star flanked by amber and a red transparent lens credibly pointing backwards horizontally, this is the only point where KK´s model is closer to Ralph Lauren´s real car that has an LED ring in the middle and points towards the sky at the same angle as the rear number plate. 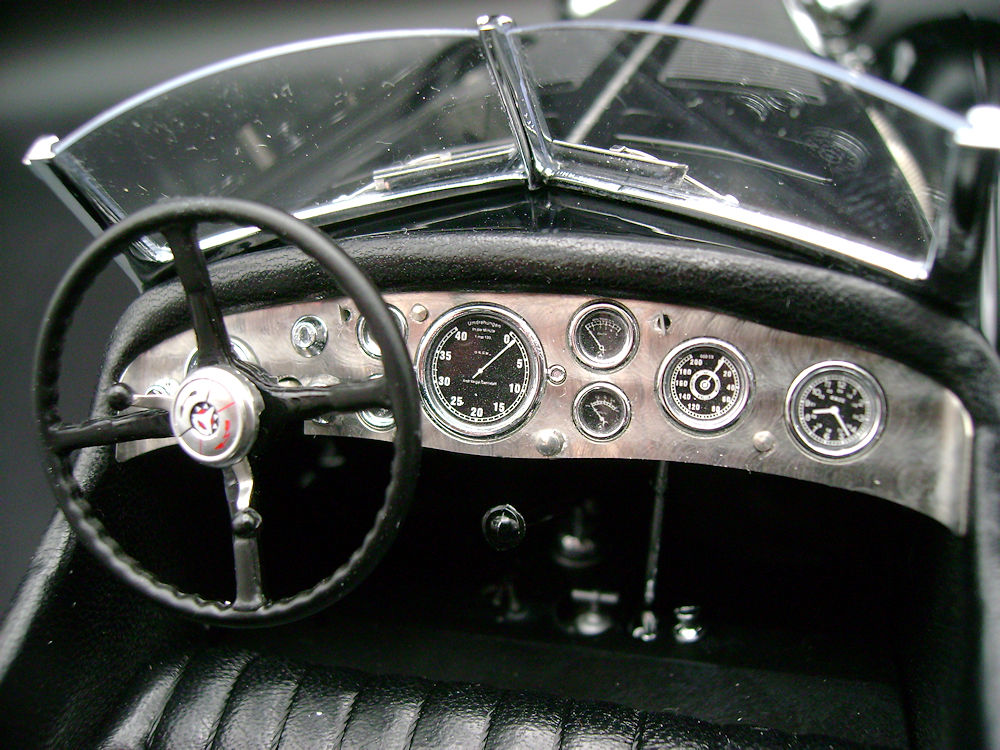 Hopping behind the steering wheel – there are no doors and there are only metal footplates to help you surmount the lowered sides – we find ourselves on real black leather. This resembles the original more accurately than CMC´s original 1:24th (which was green) and, I am sorry to say, CMC´s 25th – anniversary edition of this model that has golden leather instead here. From what I see in Paul Russel´s pictures, all the levers and pedals in the footwell are correct, but with the dashboard, CMC has taken some liberties: The general layout and the sizes of the gages and organ stops are correct, but he brush-circles diameter in the brushed aluminum are far too big to be on scale. The rev counter (it legibly says “Umdrehungen in der Minute”= revolutions per minute) and speedo (topping out at 200 km/h) seems correct, the clock on the right is different from what the real car´s restorers present: Lauren´s car does not add the hours in a smaller 13-24 format inside the 1-12 layout, but has a Mercedes logo, the clock manufacturer´s logo (Junghans) and a small embedded dial counting the seconds. The top gauge between speedo and rev counter is incorrect, too, in that Lauren´s car has the scaling almost going all around the gauges face, while the model is scaled only around the top. The organ stops seem a little flat, like buttons, and I am not sure if they could be pushed in so far in the 1:1. The steering wheel, its markings and levers seem entirely correct. 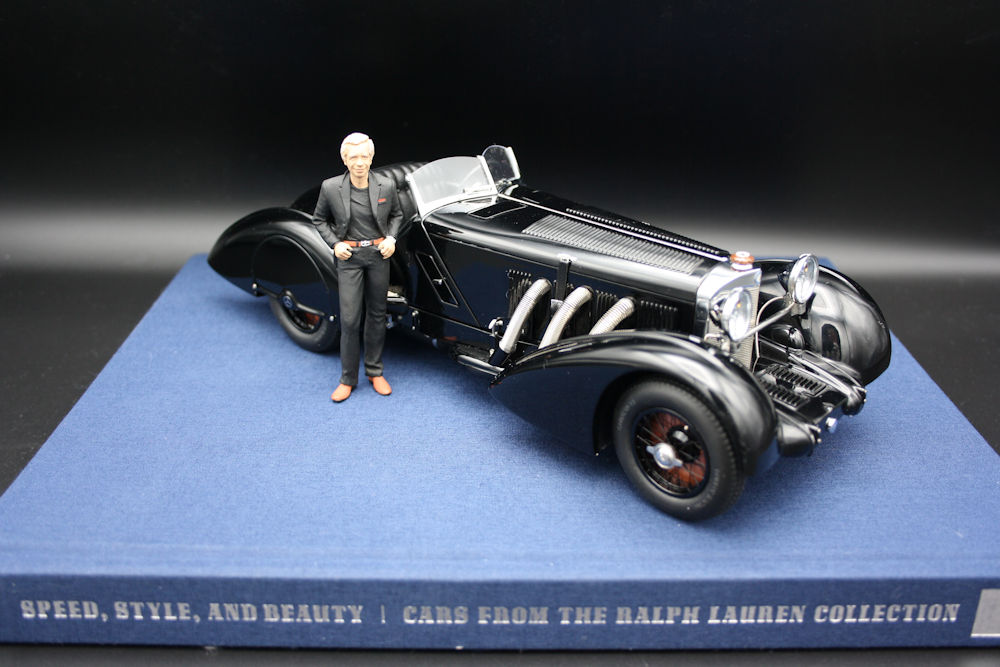 It goes without saying that this is a very impressive model of the Mercedes SSK “Black Prince” showcasing CMC´s strengths as a model maker in the best way possible, thus being a worthy anniversary monument. This (like any) CMC model is probably best appreciated by watchmakers for its real metal functionality, including the air vents opening. Even if you don´t dare do these things – most of us never open our watches either – they are beautiful. Whether this is enough for this model to reap this year’s “Best of Show” award here on DiecastSociety.com and elsewhere remains to be seen. But although there is lots of scope in between this and the KK with other contenders clearly capable of filling any gaps, this “Black Prince” will most likely continue to wear the Trossi-crown unchallenged.