As far as I can see, this is the first Cult Scales Models review on DiecastSociety.com, so let me give you a brief introduction: Cult Scale Models exclusively manufacture sealed resin vintage cars, such as this 1983 Jaguar XJ Sovereign 4.2. They come in a windowed green box and are all surprisingly heavy.

This Jaguar is by no means the first Jag by Cult Scales, nor will it be their last. It was preceded by a Jaguar XJ40 that sold out very quickly and is much sought after and will be succeeded by the Jaguar XJ X300. This member of the XJ family is the improved XJ Series 3 built from 1983. The XJ retained a very traditional design until sold to Tata and the third generation most notably differs from its predecessors by not having chrome, but thicker plastic bumpers with integrated indicators at the front and red fog lamps rear. Front and rear bumpers are clad with shiny chrome on their top. These lights and the signature double headlights are exquisitely made by Cult Scales and are better than some headlights on up-market diecast models. 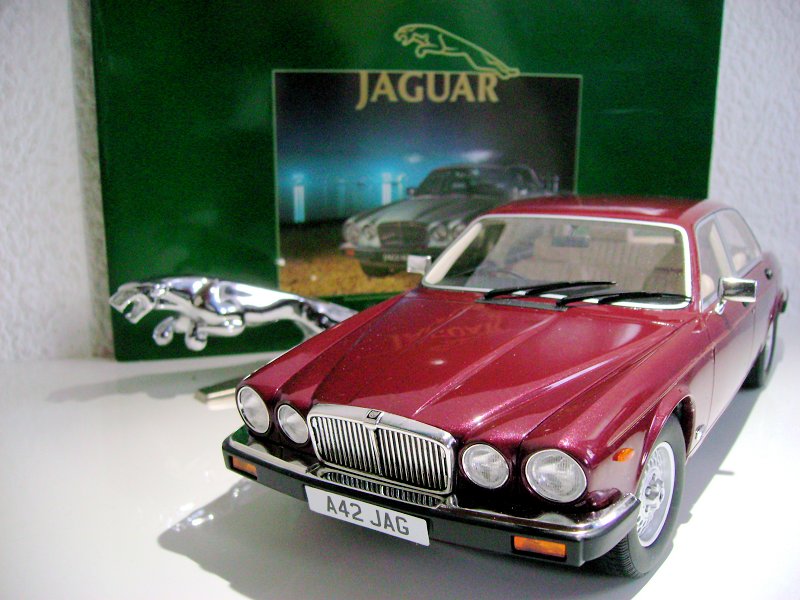 The paint on the carefully sculpted cat exactly matches the red colour in the brochure and has the golden fine waistline along its side, however, inexplicably slightly dropping beneath the left rear passenger door. The exquisite door handles, locks, door mirrors and the wing leaper badge are in blatant contrast with the probably worst and the cheapest bit, the side window frames and B-pillar-trim, which is supposed to be chrome, but is only printed on what seems to be a single piece of side windowing. Front and rear windows have the same printed on the frame, are curved with the rear including heat-wiring, while front windscreen´s wipers are fixed on a photo-etched bonnet vent, and seem a bit clumsy. 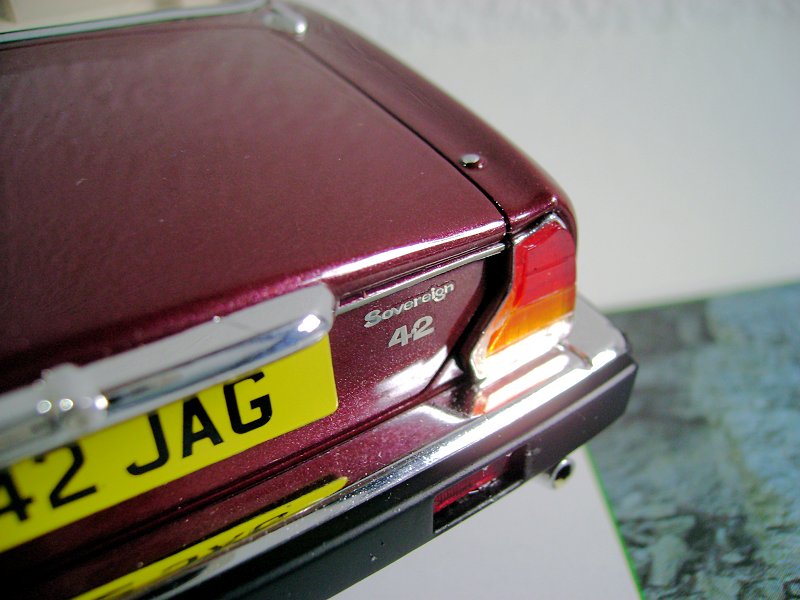 The rear end has the twin chrome fuel filler caps on both sides atop the boot and stubby hint at what credibly portrays the retracted antenna, while the gothic arched rear lights have the same flat appearance as the real car from series carried over from series one and two with only minor changes. With an underlying layer of chromed and patterned plastic, they are better than on Paragon´s Series 1. Only the exhausts on both sides and the photo-edged badges inform us, what the UK registration hints at, namely that this is not an XJ6, but the higher “Sovereign” trim line with the 4.2 litre 6-cylinder-XK-engine most commonly sold with both the XJ6 and the Sovereign, although a V12 was available on this higher trim line. This being sealed resin, there is no glimpse of it on this model, so that you have to turn to the XJ Series 1 by Paragon to view it. 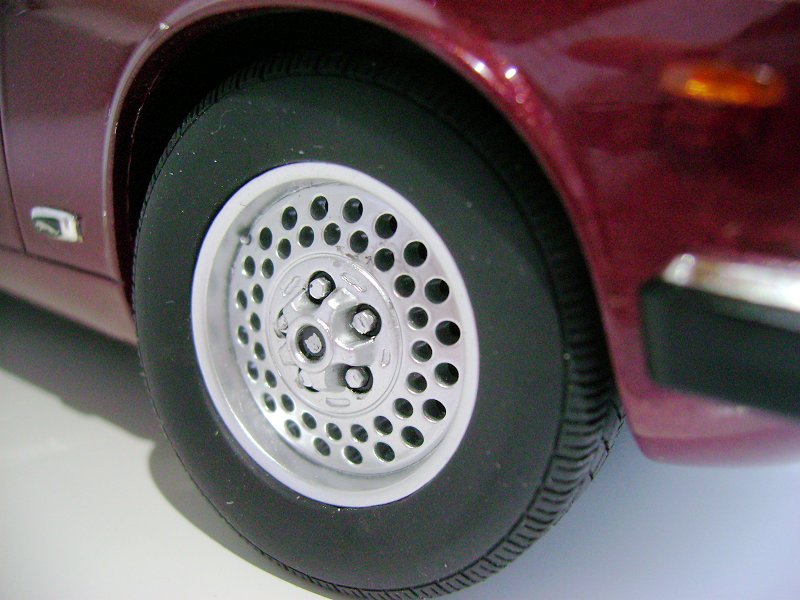 The cast alloy rims this model comes with would have been standard on the “Sovereign” and an option for the XJ6. Cult Scale has done an excellent job in replicating these with the nuts as if you could really undo them. 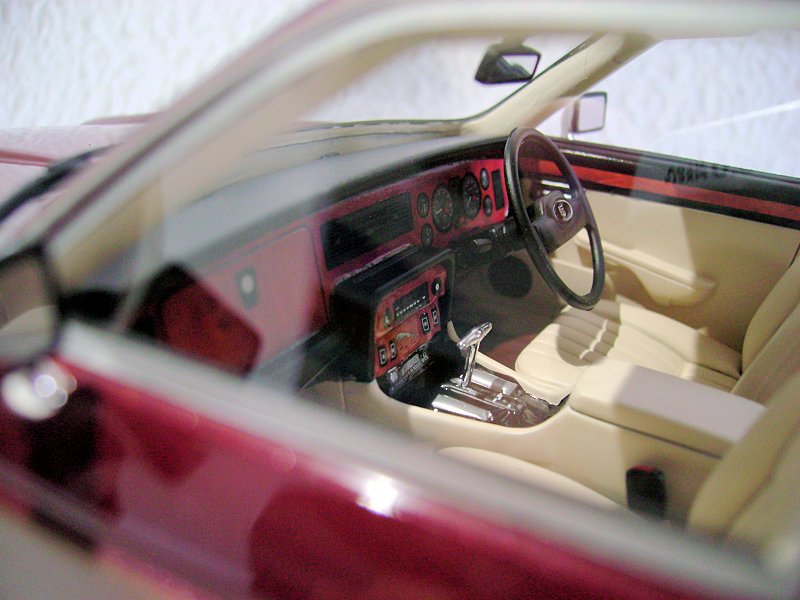 The interior looks good, too, finely replicating the leather seats, the automatic gear lever and the entire dash with its gauges, buttons, RHD steering wheel and wood veneer with glove box, all which may seem a little two-dimensionally-flat. Although the seats have the locks in place for them, seat belts are completely absent like on all other Cult Scale Models I have, which leaves me scratching my head. Another omission is the red courtesy lights forming the bottom rear of the doors´ armrests on “Sovereign” Xjs as standard. 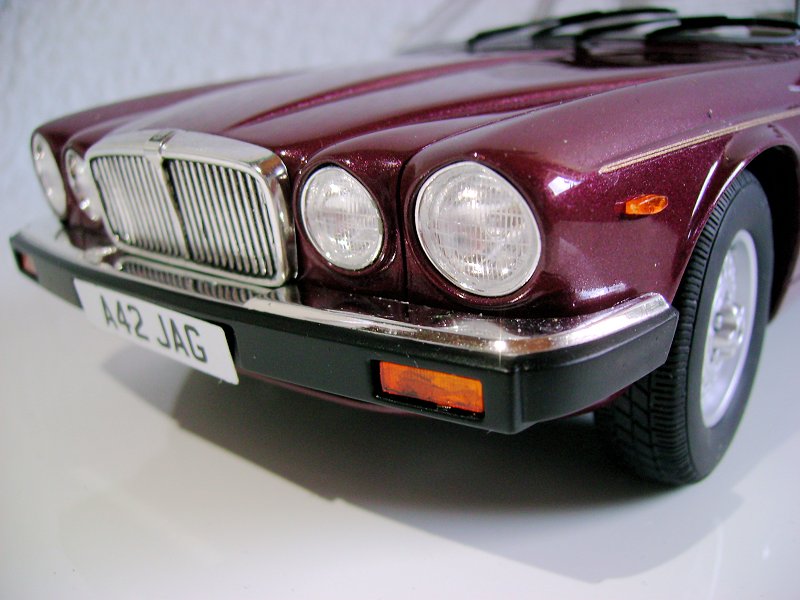 All in all, it is a good model of a classic British car and is a must-have for anyone who likes British vintage cars, but you may well find it a bit expensive for a sealed resin model when buying at anything less than 140 € can be considered a bargain.  Be advised that LS Collectibles makes this 3rd Series of the XJ in its lowest XJ6 trim line in three colours, including red, at about the same price in sealed resin, too. I would, however, prefer the Cult Scales rendition.

By the same model manufacturer, you will find the XJ40 and (Aston Martin) Lagonda on my website if you are interested. 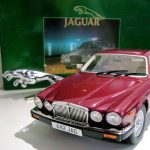 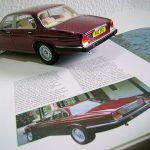 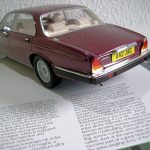 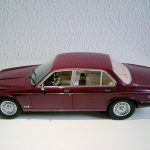 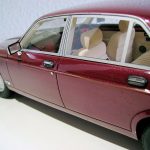 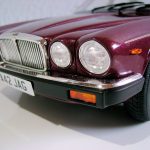 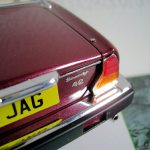 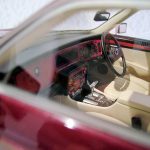 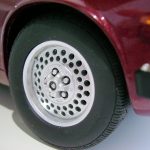